Weekend usually means eating out and giving the Moomikins a well-deserved rest from cooking. We decided to go check out a Nasi Lemak place that was recommended by one of her colleagues, called Poppo Kanteen in Bandar Puteri, Puchong. 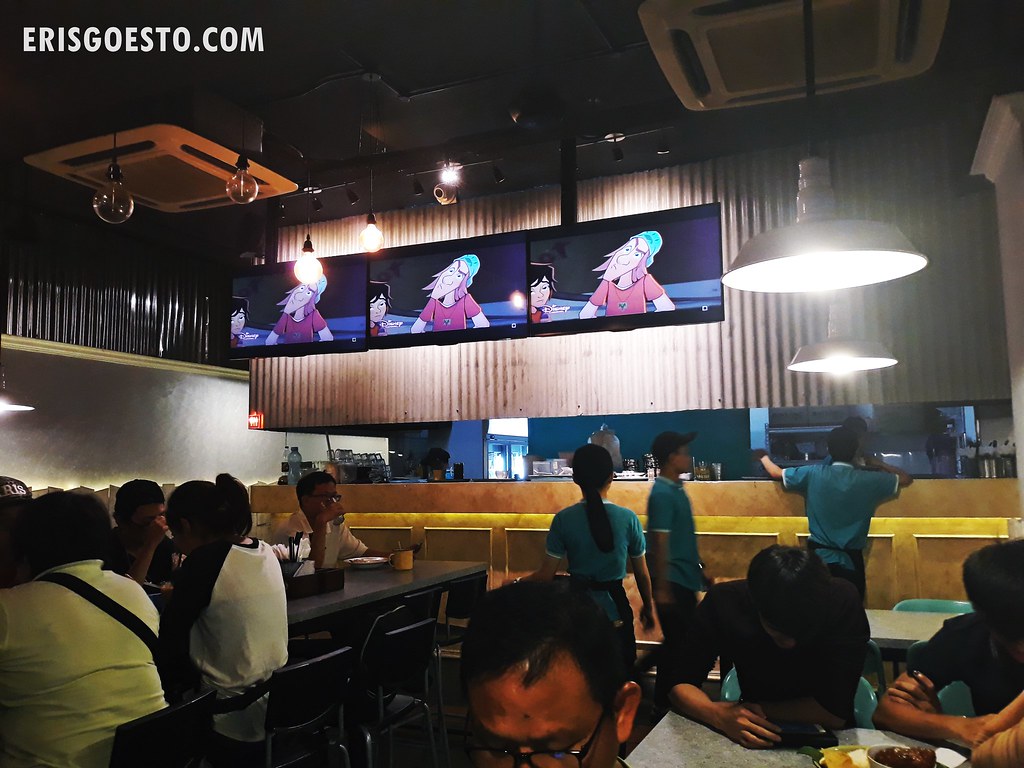 Cosy interior, mishmash of modern and traditional elements. Like its namesake, it sports a ‘canteen’ style look but more upscale. 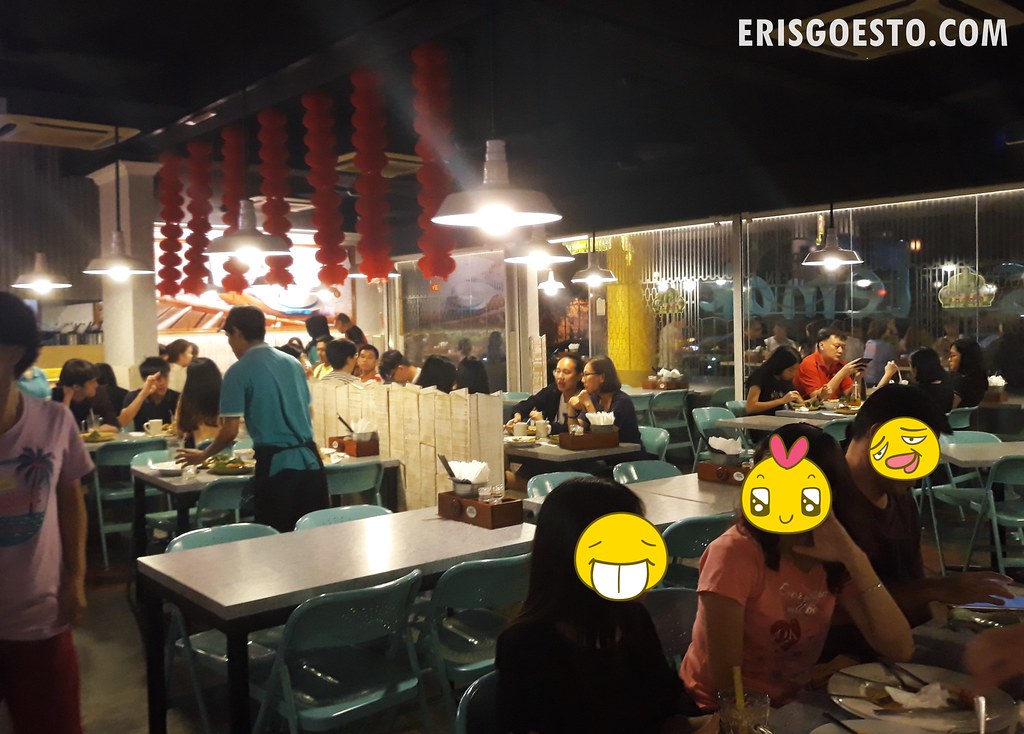 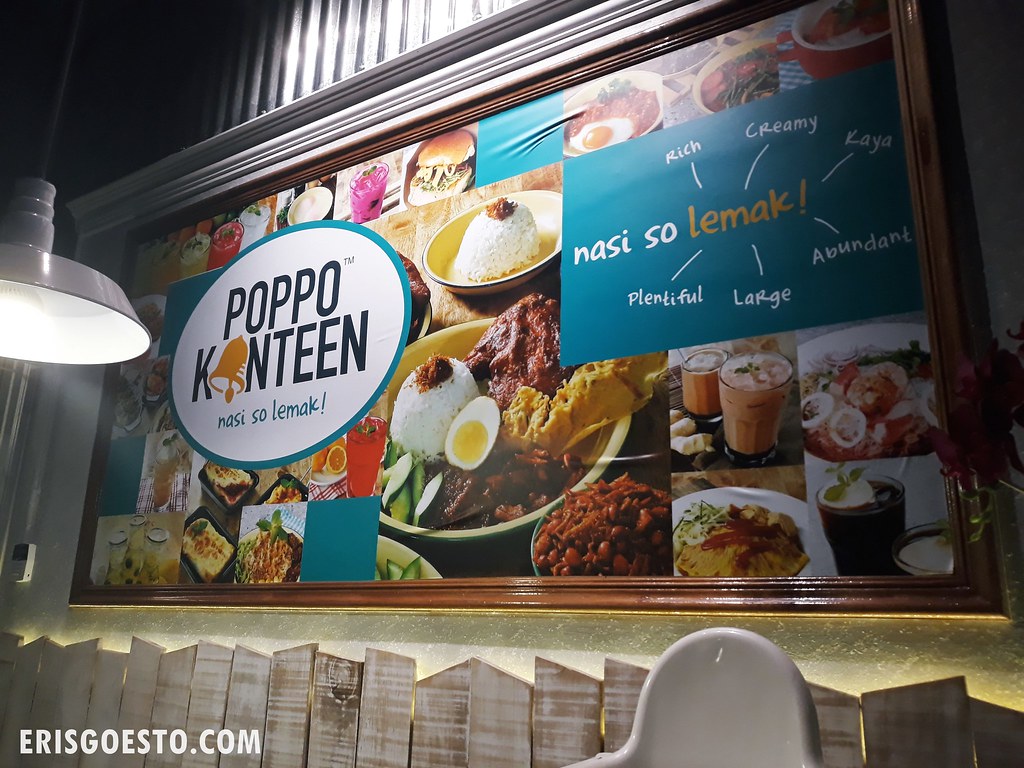 Their signature is Nasi Lemak, but there are hundreds (yes, more than 100) of dishes on the menu, from local favourites like Briyani Gam and fried rice, to toast, pita wraps, Western food, spaghetti and more. Because there are so many dishes, one can’t expect each one to be tasty, as we soon found out. 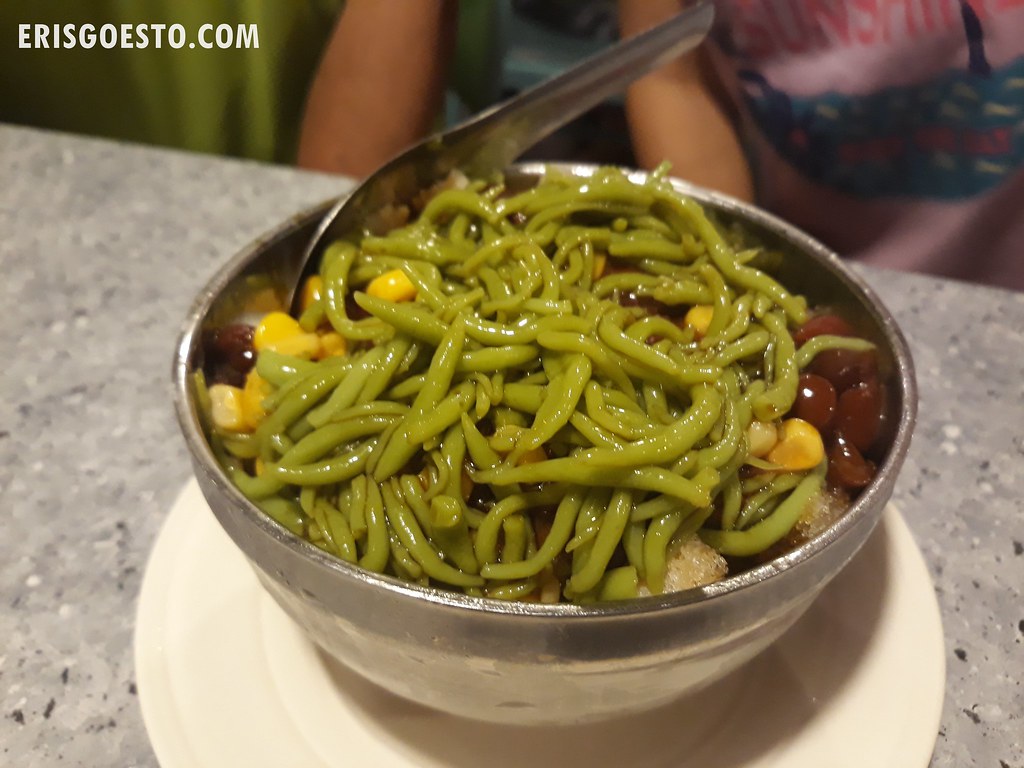 Service is poor, and staff do not seem well trained. I would think desserts like Cendol (above) would come after a meal, but it was the first item that they served. Taste wise, it was alright but still can’t beat the cendol at PJ Old Town’s Medan Selera.

We ordered three glasses of water. Only one came (together with the dessert). They forgot about the other two glasses until much later when we reminded them. Funny, seeing that the orders were keyed into a system and printed out onto a slip; which clearly showed three glasses. Do you not prepare the same items together? 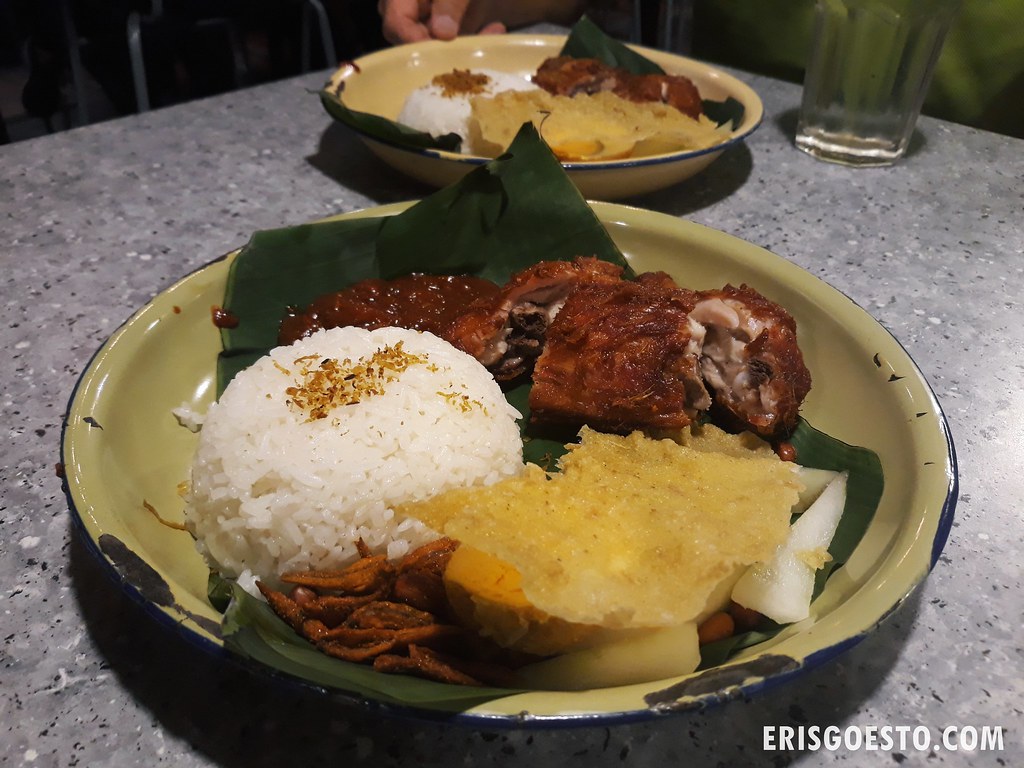 Bro and Pop’s Nasi Lemak with Ayam Berempah (fried chicken thigh) came to the table early.The rice was thick with the fragrance of coconut milk, served with spicy fried anchovies, emping (fried cracker), fried egg and spiced fried chicken, which was crunchy on the outside, flavourful and tender on the inside. Sambal delivered a spicy kick.

Moomins and I ordered dishes that required firing up the stove so it was understandable that it would take longer. By the 20 minute mark, however, when we saw other tables getting their dishes, we were certain that they had, again, forgotten our orders. 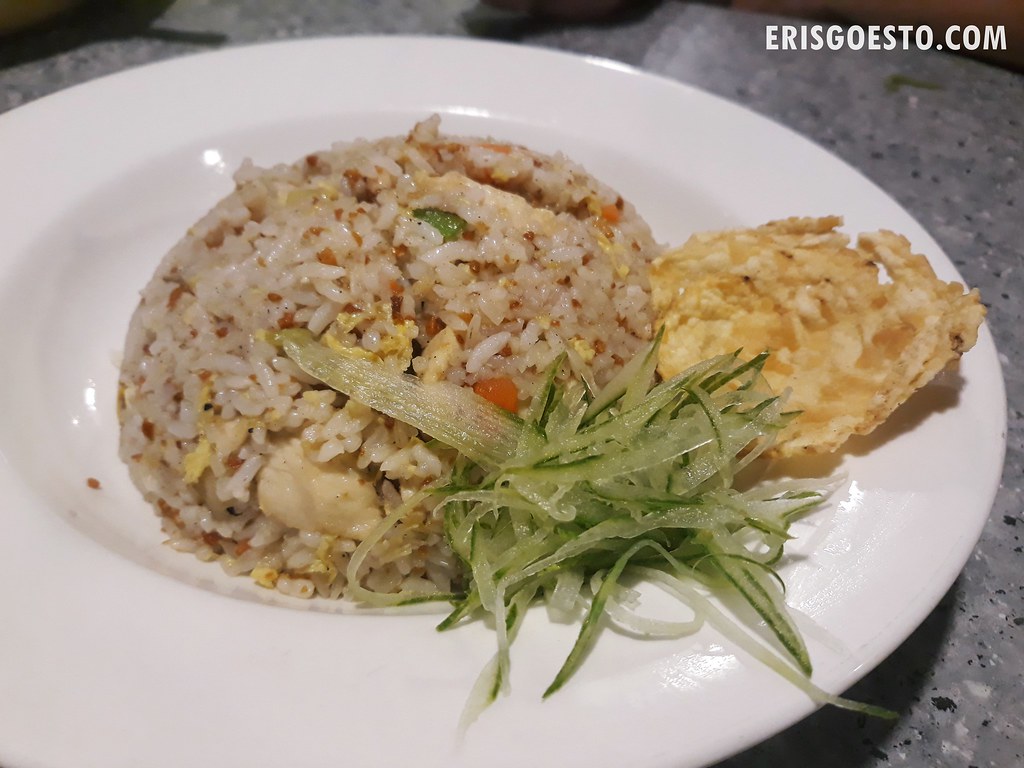 Moomin’s garlic fried rice. Somewhat wet and greasy, although it did have a nice garlic fragrance. 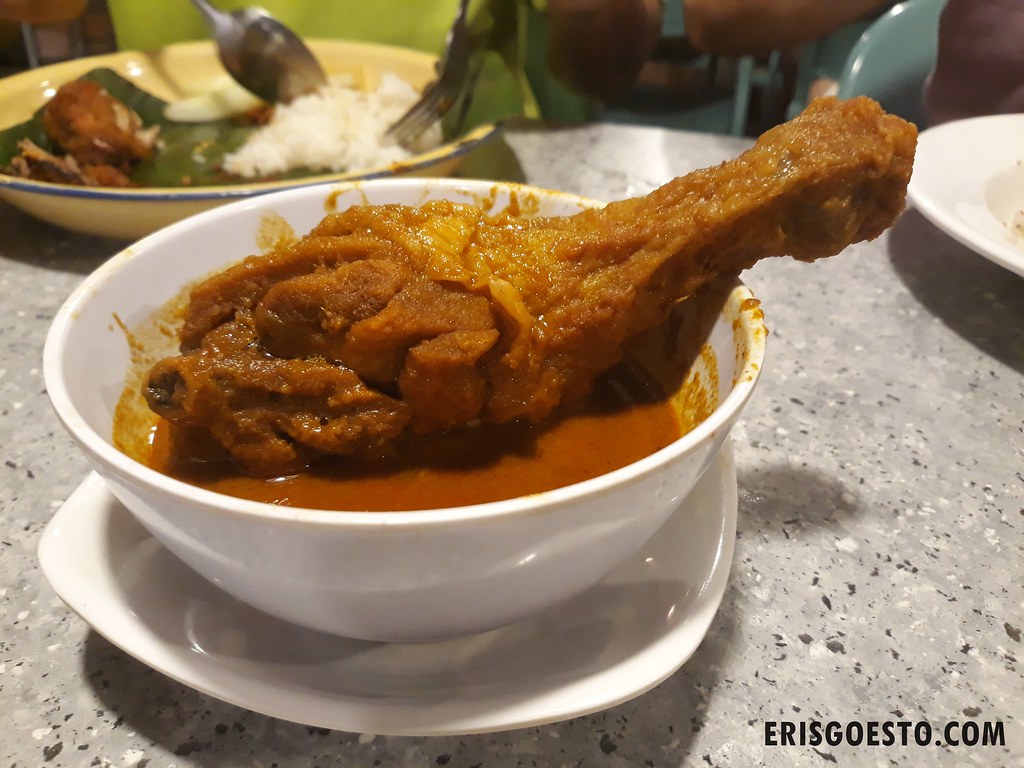 Ala carte chicken curry, which also arrived late and was obviously forgotten, since curry chicken is pre-made and would have only involved scooping it into a bowl.The meat was extremely tough. Sauce was meh. 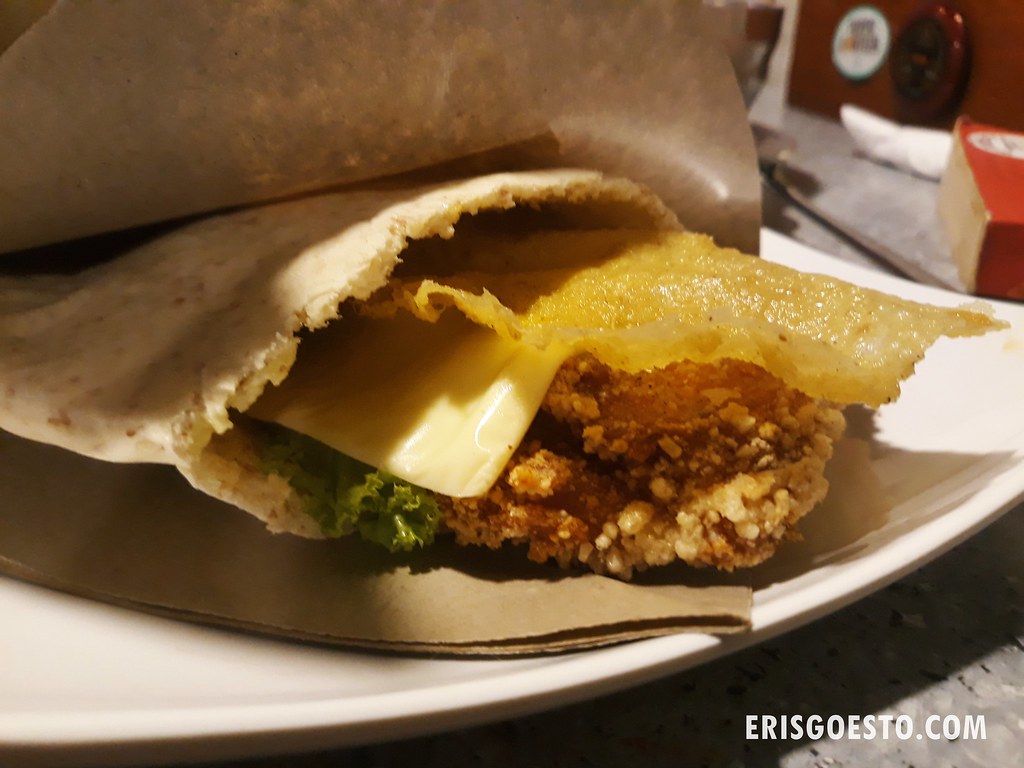 After more than half an hour, my order of Chicken Pita finally arrived. All my family members had finished their food by then and I was left to finish mine alone. The pita was cold – the heat came from the chicken which had just been fried (they obviously forgot to prepare my order). No sauces, only a slab of cheese, so it was extremely dry. It wasn’t that bad but not something I would waste my time waiting for.

Do you guys not prepare orders table by table? What kinda system are you using in the kitchen; that you key in orders into a computer and still somehow manage to mess it up?

All in all, their nasi lemak was decent but I’ve had better, and it was definitely not worth the wait and the bad service. There are better alternatives offering better service in the area. Would I come again? Maybe not.