I’m not a big fan of alcohol, so the different nuances between wines, the character of whisky or the smoothness of beer are lost on me. It’s funny because in my line of work, I meet a lot of alcohol drinkers and they keep telling me “You’ll like it eventually!”… but it has been five years and I still haven’t developed an affinity, so I doubt I ever will. 😀

That being said, there are plenty of times I’ve had to drink for work, and the Kirin Ichiban X The Table event recently was one of those. A collaboration between Japanese premium beer brand Kirin Ichiban and The Table, Isetan Lot 10, members of the media and select guests were invited for a tasting/pairing of specially curated Japanese cuisine, designed to complement the malt beer. 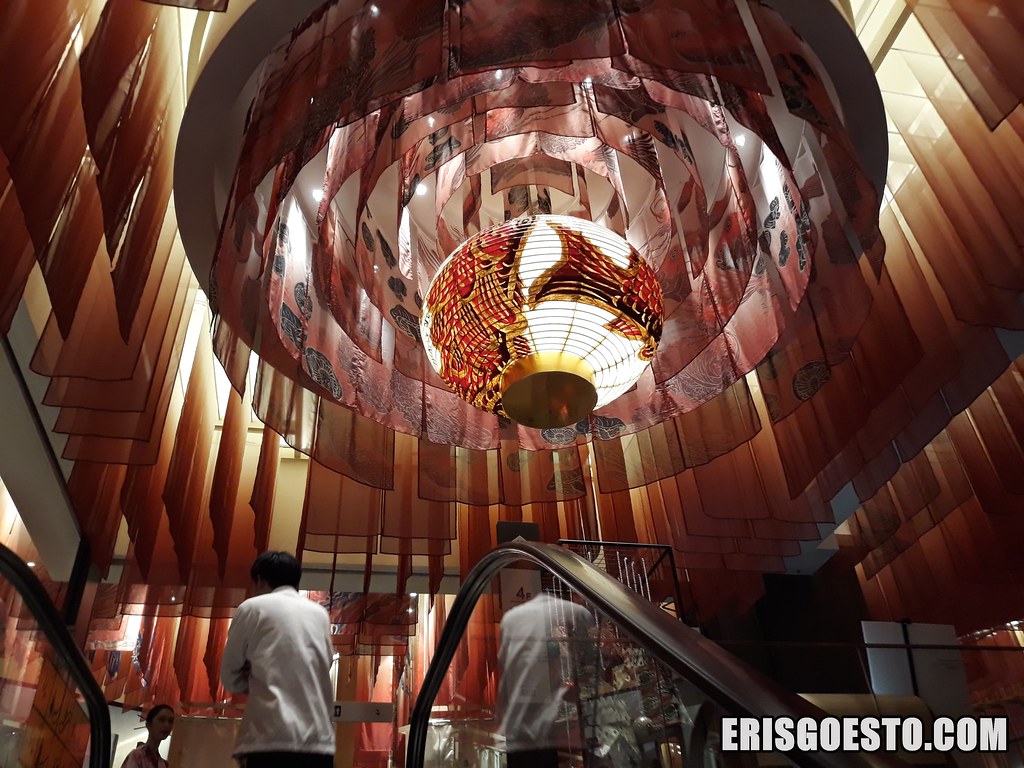 If you have budget for a date night and haven’t yet been to The Table, I suggest bringing your s/o here. Located on the top floor of Isetan The Japan Store in Lot 10, Kuala Lumpur, the exclusive dining space comprises six restaurants serving authentic Japanese cuisine, from tonkatsus to grilled wagyu beef. Ascending from the escalator, you’ll immediately be greeted by the Instagram-worthy decor: layers of thin, sheer fabric hanging from the ceiling and a giant koi-motifed lantern as the centerpiece.

Big events are notoriously difficult to put together, but I have to say the organisers did a fantastic job! We were split up into groups which would rotate between the different restaurants, since we couldn’t all fit into a space at the same time. While waiting, Japanese performers in traditional garb danced and entertained us with instruments. There was also a photo booth station where visitors could dress up in a yukata, and another where they could get calligraphy done by a Japanese calligraphy master.

Since beer was the main star, there was no running away from trying it! I’m no beer enthusiast, but I can see why beer lovers would like it. Crafted in Japan using 100% malt, it is created using the ‘First Press’ brewing method, where only the first press of the malt liquid is used in order to produce a pure, crisp taste with no bitter aftertaste. It was certainly smoother and less bitter than most of the other beers I’ve tried (I’m looking at you, Guinness), and much milder.

We were promptly ushered in to our first restaurant, Touan, a Yakitori and Robata-centric establishment, where they presented a grilled yellowtail and snow crab tamagoyaki. Yellowtail is a popular fish to eat in the winter months, thanks to its higher fat content. 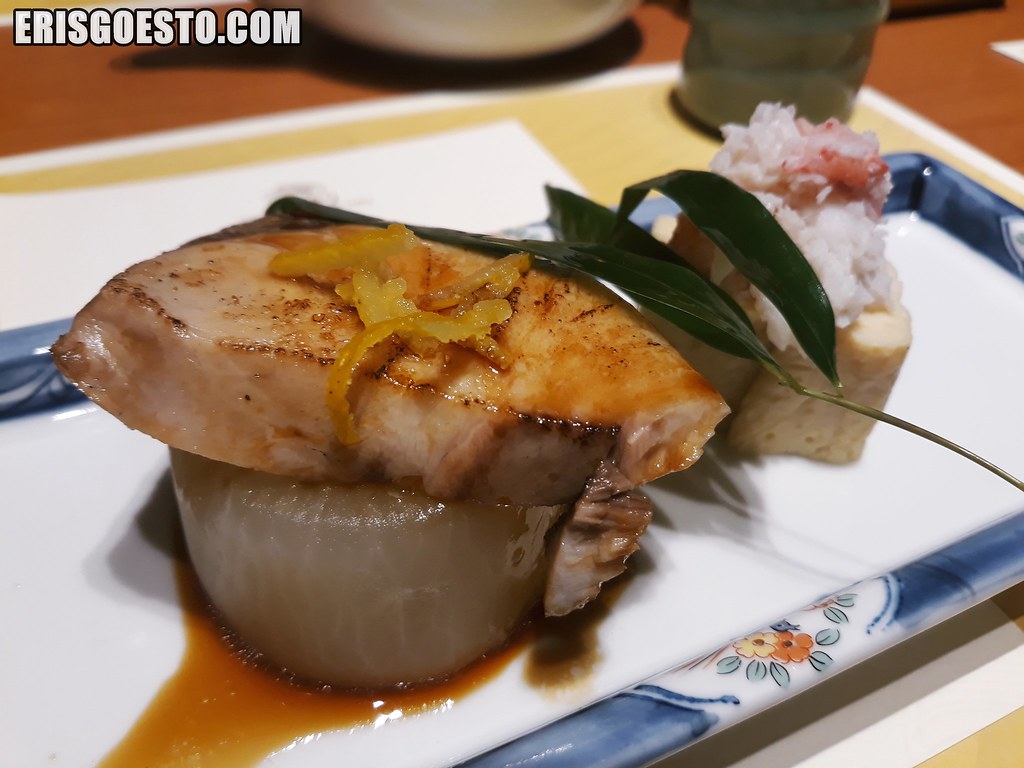 Beautifully grilled, the fish was extremely juicy, and the radish it was sitting on helped to balance out the fattiness. The snow crab tamagoyaki was much lighter, with a delicately sweet egginess that complemented the freshness of the snow crab. We were definitely off to a good start! 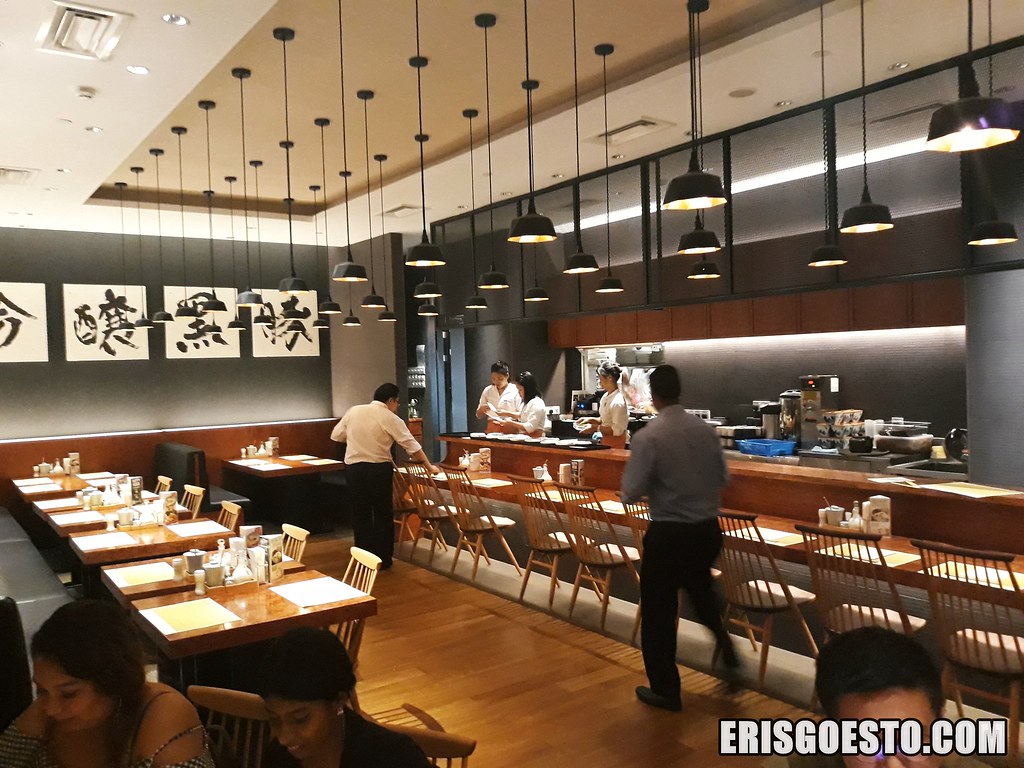 The 30-minute bell rang, signalling our group to move to the next restaurant, Tonkatsu Anzu. As its name suggests, they specialise in breaded, deep fried goodies, or tonkatsu. The most popular version is pork cutlet, but other items such as seafood can also be made tonkatsu-style.This is notably different from tempura, which does not use panko (bread crumbs), but batter.

In line with the winter theme, the restaurant had seasonal ingredients flown in from Japan, and one of these which we got to try that night was Scallop Katsu. 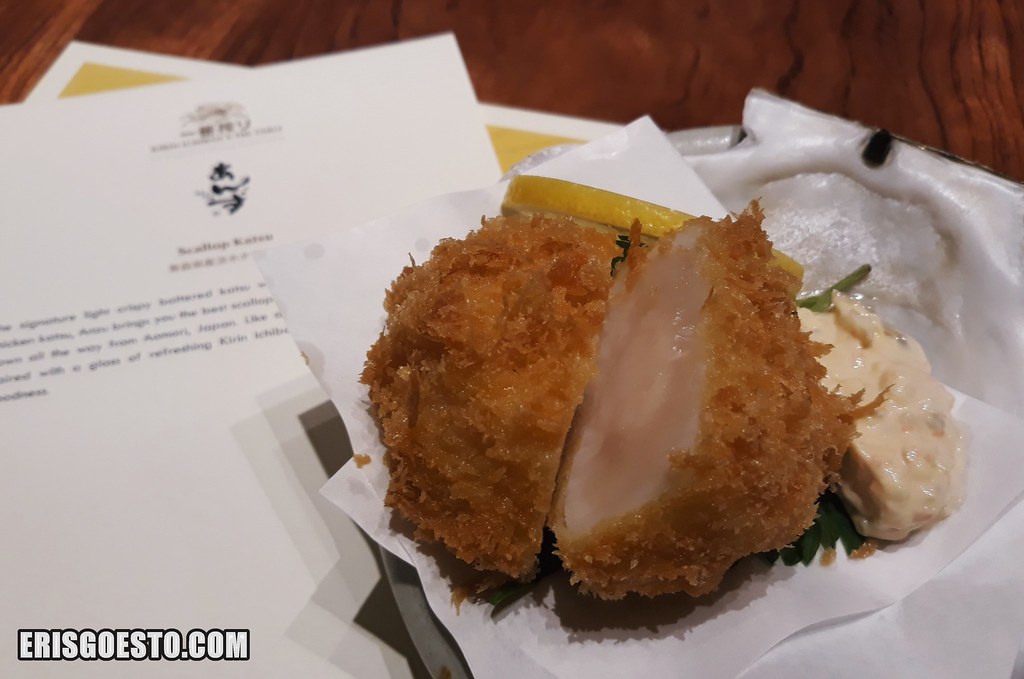 When I say  giant, I meant giant. I have never seen such a big piece before – it was as big as my fist! Lightly breaded and then deep fried, the scallop nevertheless retained its juicy sweet flavour and freshness. It was served with a side of creamy dip and lemon slice to cut through the greasiness. There wasn’t a need for that, in my opinion, since it didn’t feel cloying or greasy at all. Could easily have eaten two more of these lol. It’s so rare to be able to eat scallops to my heart’s content (they’re usually tiny and expensive) so I was truly well satisfied with this. Among all the dishes I tried that night, this would be the one I would choose to come back and have, if my budget allows it. 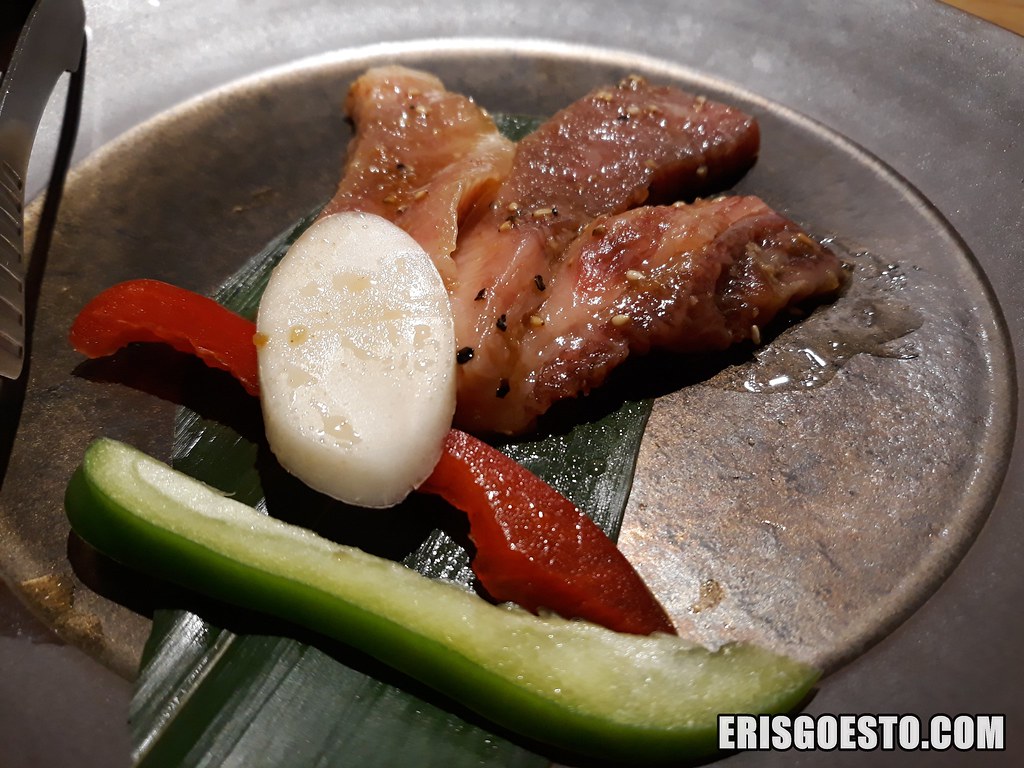 Next, we were up for some hands-on action at Toraji, where we got to grill our own Wagyu beef!

Interesting fact: Although they are a Japanese resto, the name Toraji is Korean for ‘Ballon Flower’. The restaurant has humble beginnings in a backstreet in Ebisu, Tokyo Shibuya, but has since expanded to over 70 outlets in different countries, including Malaysia. 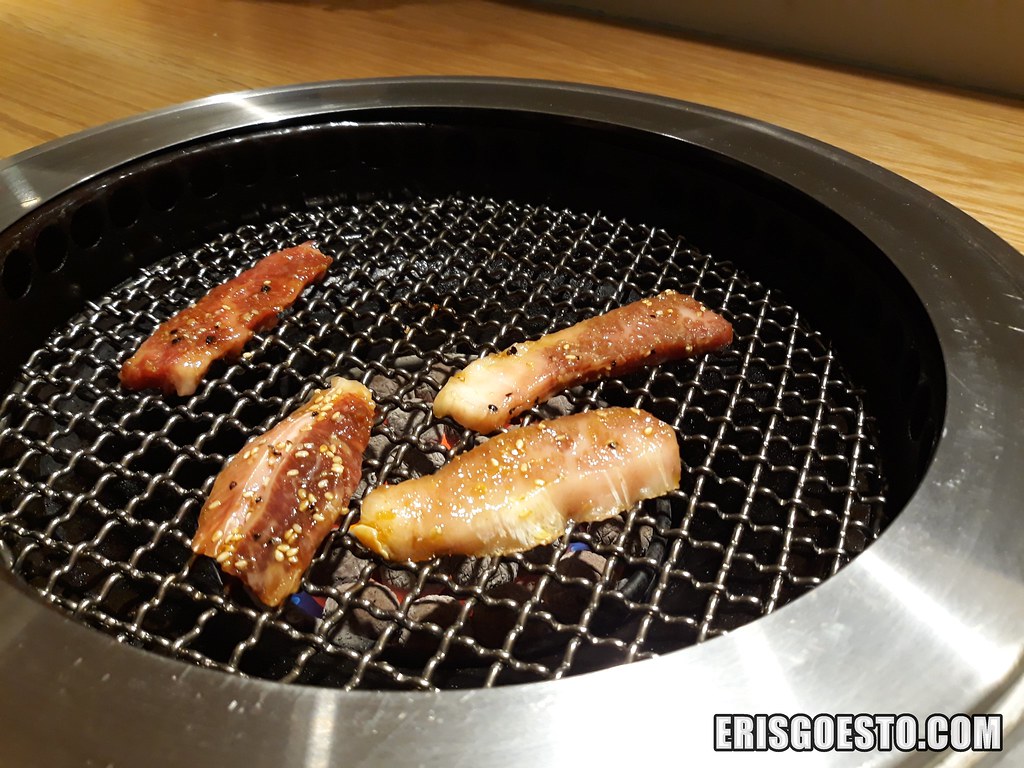 -Our generous slices of wagyu beef ribs had an A5 marbling – the highest grade available on the market. praises whatever gods blessed me with this – also the cow that died for me The marbling of the fat interspersed with lean strips was absolutely amazing. To use the oft-used cliche, it had a melt-in-the-mouth texture. There’s just no other way to describe it. The meat simply melts upon touching your tongue. 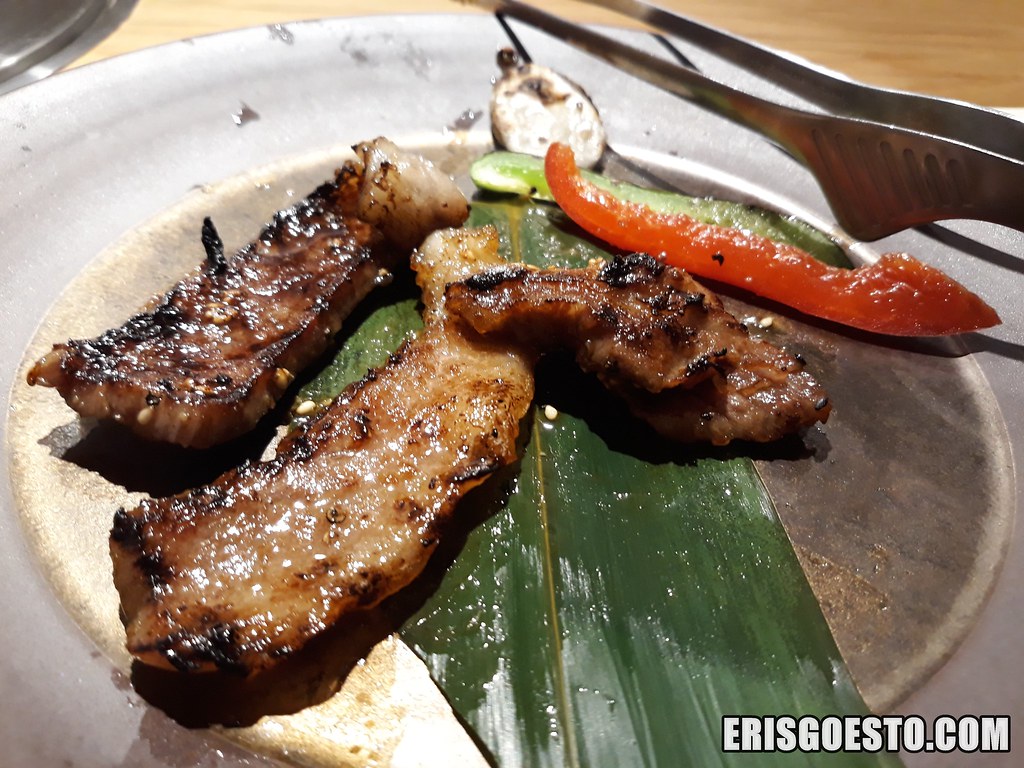 I liked that they used a charcoal grill to bring out the rich beefy flavours. The meat speaks for itself, without the need for sauces or too much seasoning. Excellent beef. If you’re wondering how regular beef holds up against Wagyu, there is no contest. There’s a reason why it’s one of the most expensive types of beef in the world.

Slowing down a little as we neared the end of our tasting, we hopped over to The Tokyo Restaurant for a cold capellini with Hokkaido sea urchin. After the heaviness of the tonkatsu and wagyu, this was perfect to cleanse the palate with lighter, airier flavours. Served cold, the silk-like noodles were coated in the creamy umami-ness of the sea urchin and easily slurped up.

Last, but definitely not least, we ended the night with an excursion to Toriden, where we tucked into truffle with toriden tamago, matsuzake yaki and a soup of chicken dumpling with chicken collagen. 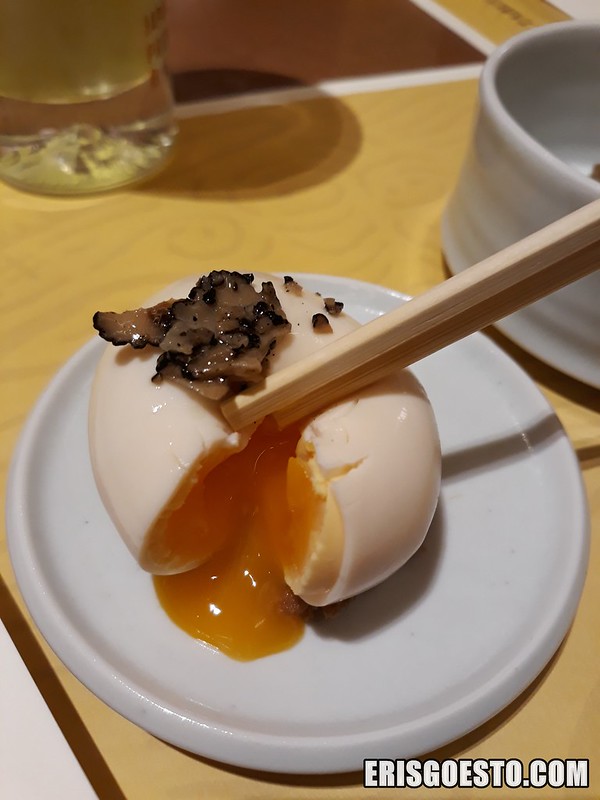 We were all a little apprehensive to break open our soft boiled eggs because they looked so bouncy and perfect, but some pressure with the chopsticks soon revealed a golden, oozing centre. The truffle on top lent an earthy dimension to the dish, while the bottom of minced meat brought a nice balance of sweet and savoury.

The matsuzake yaki, which is a traditional minced chicken loaf, has a beautiful name which means “wind in the pines”. After all the amazing dishes we had, this was the least impressive, since the meat was rather dry, but the flavours were good nonetheless. 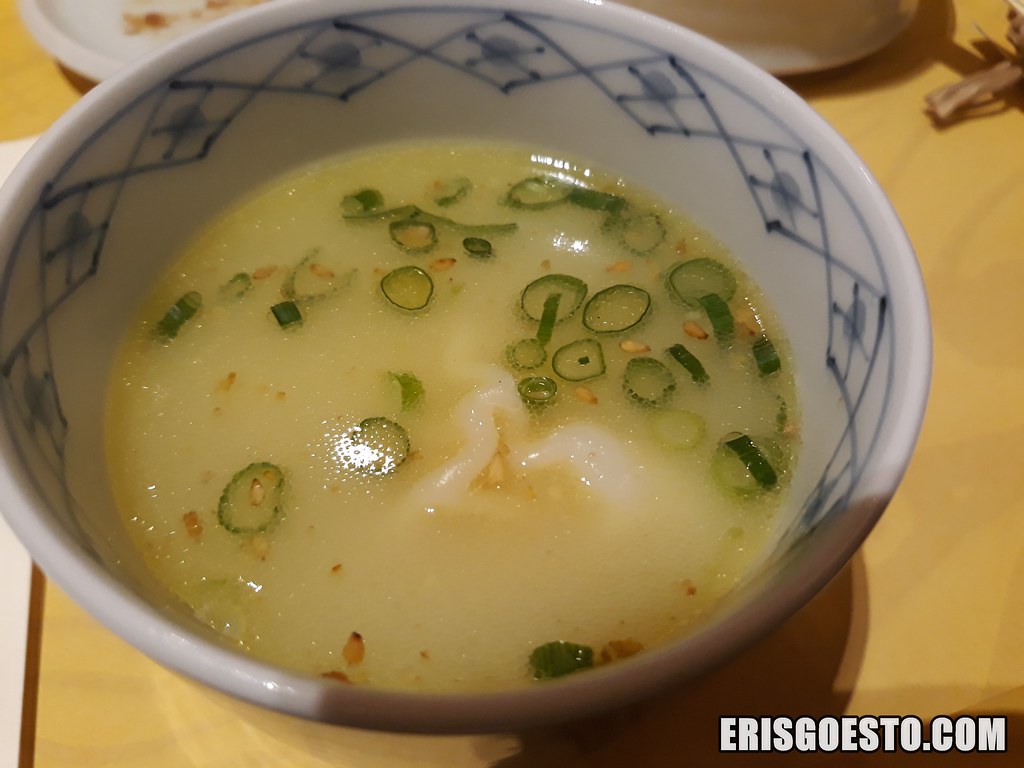 And finally, the soup of chicken dumpling with chicken collagen. The soup was probably boiled for hours for the flavours to fully seep into the broth, and I could taste the lip-smacking stickiness of the collagen with every sip.

We ended the night with our bellys full and palate satisfied. For a few short hours, I really felt like I was transported to Japan!

*Since this is a specially curated winter menu tasting to pair with Kirin Ichiban, expect the menu’s items/portions to vary during your visit.

*The sixth restaurant at The Table is Sushi Azabu, which did not participate in this event.