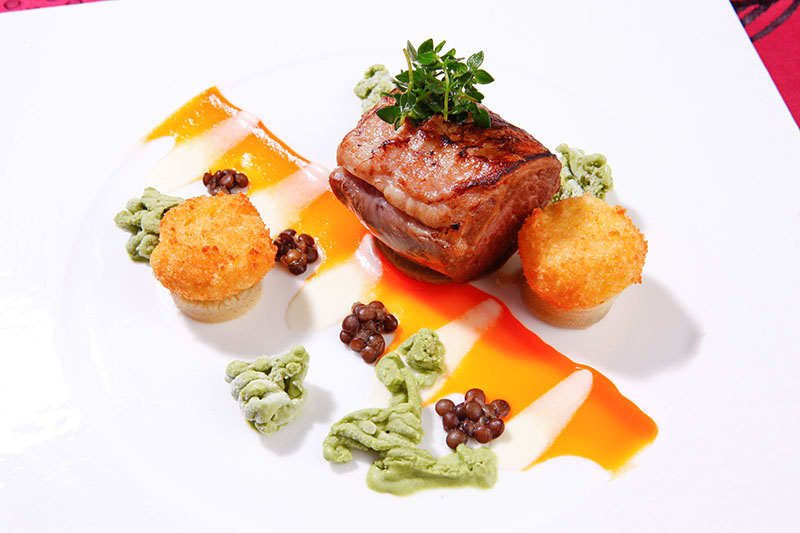 Hey guys! Here is the second part of my MIGF food tasting session at Resorts World Genting earlier this month. Was supposed to put this up earlier but couldn’t find the time to since these past few weeks have been crazzzzy. If you’d like to read the writeup I did for work, click here.

For those reading this for the first time, MIGF, short for the Malaysian International Gastronomy Festival, is a month-long fest where some of the country’s top chefs from restaurants all over the country whip up some delectable ‘festival menus’ which diners can enjoy throughout October. RSW’s two restos, LTITUDE and The Olive are both part of this event. 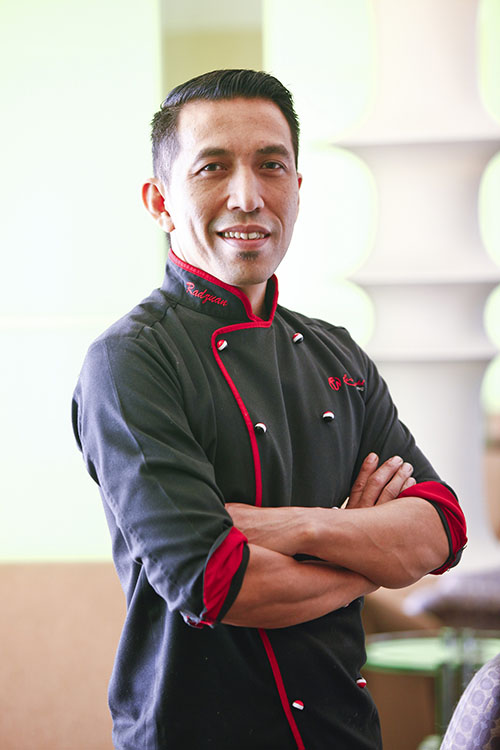 So after digging in to our scrumptious 10-course lunch at LTITUDE, we sauntered over to the The Olive, which won last year’s Golden Cauldron Award. This time around, expect similarly excellent fare as Chef Mohamad Radzuan returns to spearhead the kitchen with fusion and Western Continental-style cuisine. 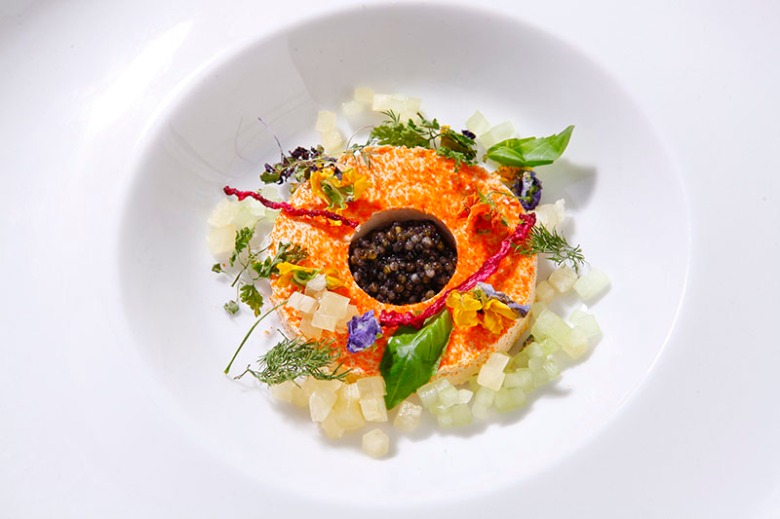 First time having sea urchin! It tasted delicate and salty on the tongue, which was great when paired with the tangy sweetness of pineapple and the freshness of the cucuber basil. Super light on the palette.

The dish came with a white cloth pouch, so I initially thought the food was inside the pouch and we had to unwrap it in order to eat. Turns out the cloth had hot sea salt in it, and when lifted, lo and behold! Lobster carpaccio underneath. The flesh was meaty and sweet, while the lemon zest, orange and cilantro cress gave it a sour tang which was super appetizing and opened up our appetites for the next course. 🙂 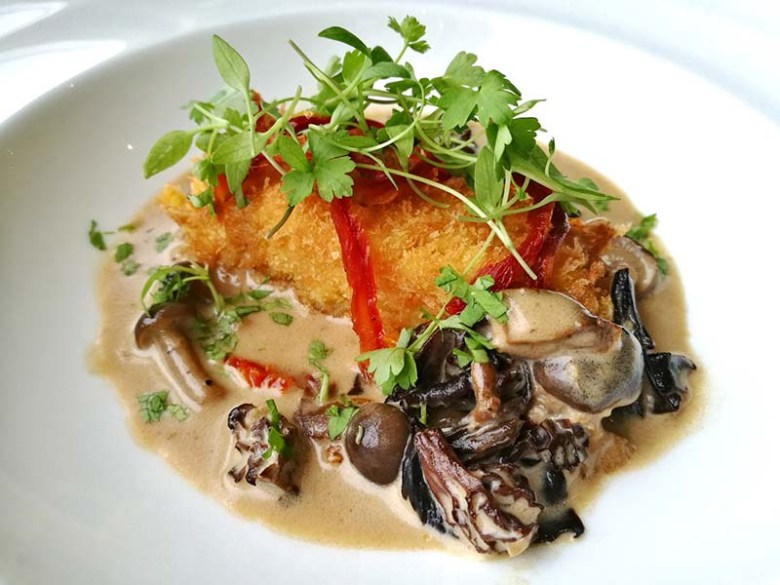 The heavies started rolling in, first with the Pan-fried risotto with creamy wild mushroom and sundried tomato, garnished with Italian parsley and truffle. After our truffle feast at LTITUDE, I was aware that I was eating a lot of shrooms that day…but nobody ever said no to more mushrooms.

Rich, earthy and creamy flavours were jam packed into the sauce, but what I liked best was the risotto. Instead of the usual, we get a breaded block, which, when cut open, revealed fluffy bits of chewy rice on the inside. 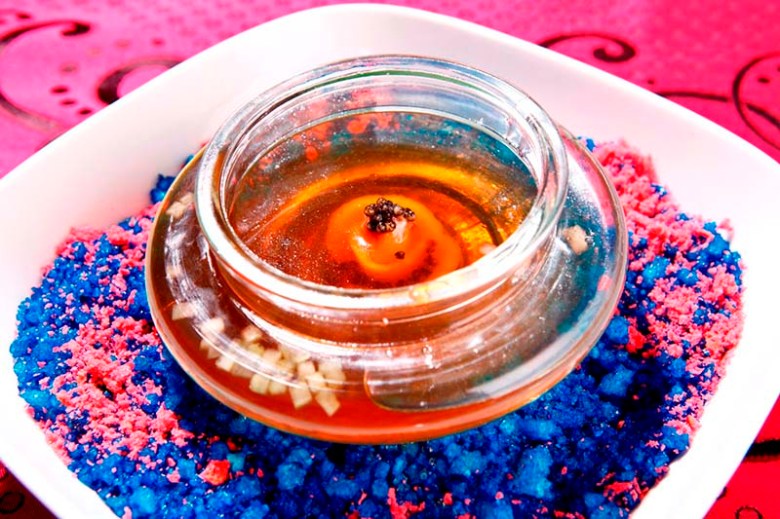 This dish’s presentation was interesting, to say the least – the soup was served in a jar lid, which had been inverted on a bed of lavender salt. The lavender smelled like the type you’d use for aromatherapy sessions. The soup was good on its own, but the cod fish had sunk into the top knob of the jar lid and a lot of my media friends missed that chunk of meat. Also, the lavender salt was quite overpowering and it felt rather odd to be drinking soup when the smell reminds you of a spa ie smell + taste didn’t go well together lol. 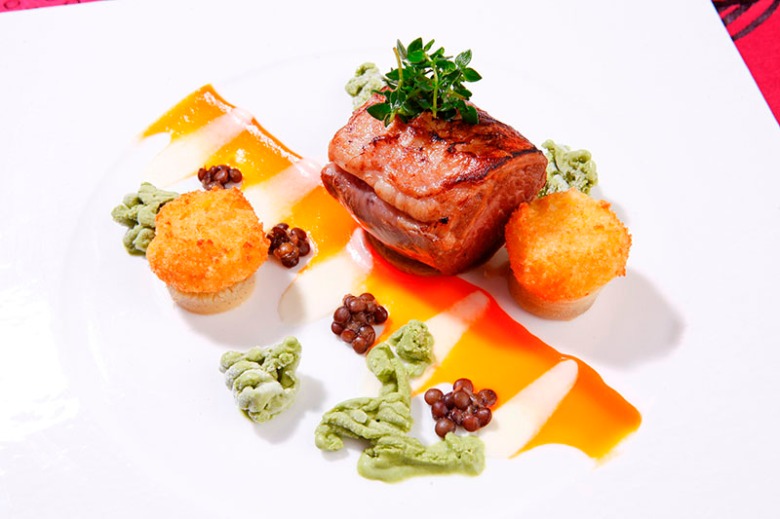 Lamb usually comes with mint sauce, so I was surprised to see it served with mint ice-cream. That might sound weird initially, but trust me, it’s good – kinda like meatballs and Lingonberry jam. The meat, which came in a generous chunk, was perfectly pink on the inside, juicy and tender, while the ice-cream was cool and refreshing. Presentation was top notch as well; looked like a piece of art more than a food dish! 🙂

This was, according to the chef, one of the hardest dishes to prepare coz there are so many elements on it. You get different degrees of sweetness and flavours – creamy and rich slightly melted milk chocolate bar, fluffy creme brulee, sweetish-sour and citrusy pomegranate, sugary sweet marshmallow and naturally sweet caramel apple.

The Olive’s festival menu is priced at RM298 nett, and RM488 nett (with wine pairing).

MIGF is running until Oct 31 so go check out more details on migf.com, or rwgenting.com ! 🙂