A Continental fine dining restaurant seems like an unlikely place to find the world’s highest grade Miyazaki Wagyu Beef – but that’s exactly what diners will get at The Olive at Resorts World Genting. The award-winning establishment is the first in Malaysia to offer Miyazaki Wagyu – from the Miyazaki region in Japan – and only among a handful of restaurants around the world with such an accolade. Widely considered the gold standard in its native Japan, the beef has been crowned champion at Japan’s Wagyu Olympics for three consecutive tournaments since 2007. 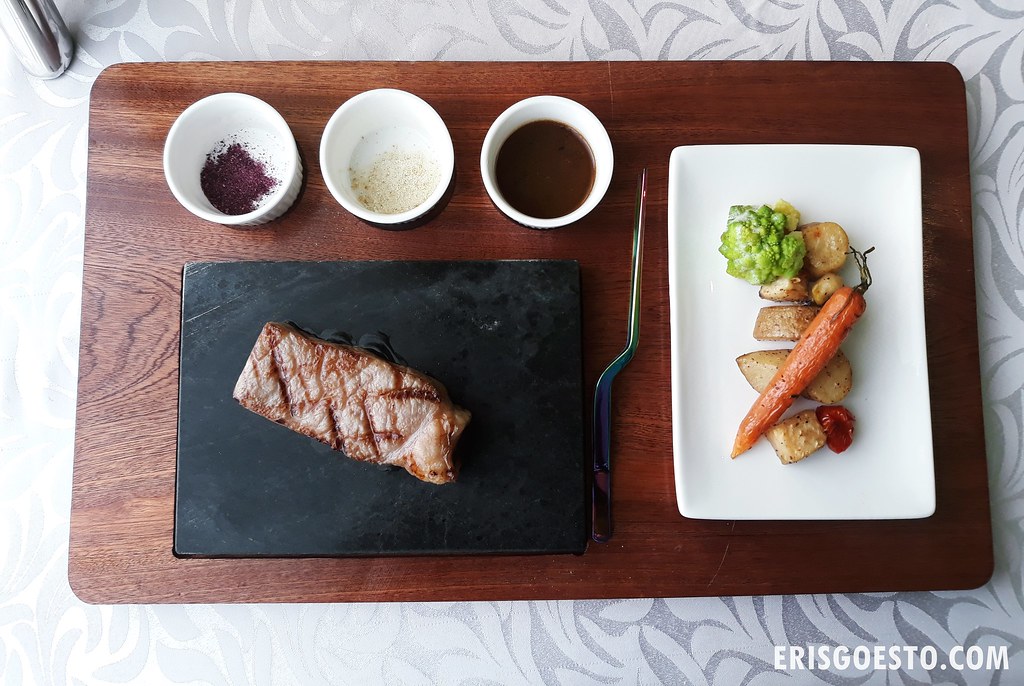 I had the privilege of trying out this exquisite meat at a recent food review for work cries tears of happiness. Under the hands of The Olive veteran Chef Mohd Radzuan,  we were served a wondrous meal – a 150g cut of top grade Miyazaki beef, with a side of grilled vegetables. Arriving at our table, the beef sat on top of a heated stone slab, sizzling in its own fat and juices. No seasoning is added, but it comes served with three types of salt, which is all it takes to enhance the meat’s flavour. 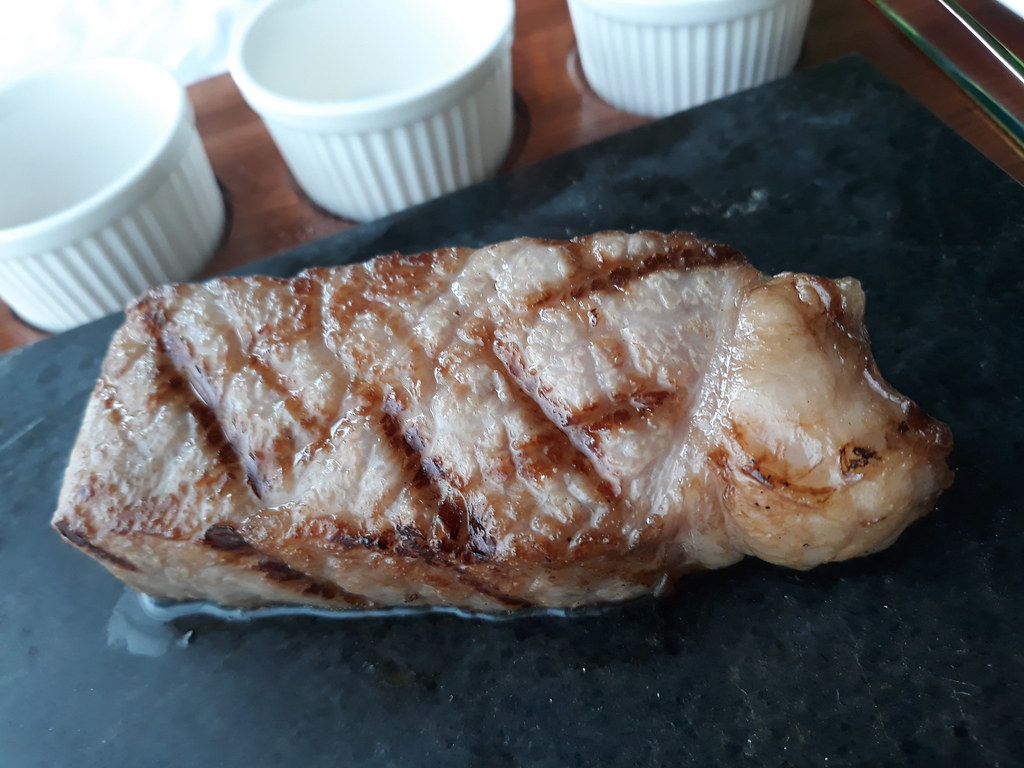 Wagyu is the general term for beef from four traditional Japanese cattle breeds, genetically predisposed to contain a higher percentage of omega-3 and omega-6 fatty acids. Because of its intense marbling, it yields a delicious, tender yet healthy meat that is famous all around the world. The value of wagyu depends on the combination of environment, weather, feed and cattle strain – which leads it to be identified by their production region, in the same way connoisseurs would refer to French wine from certain regions. 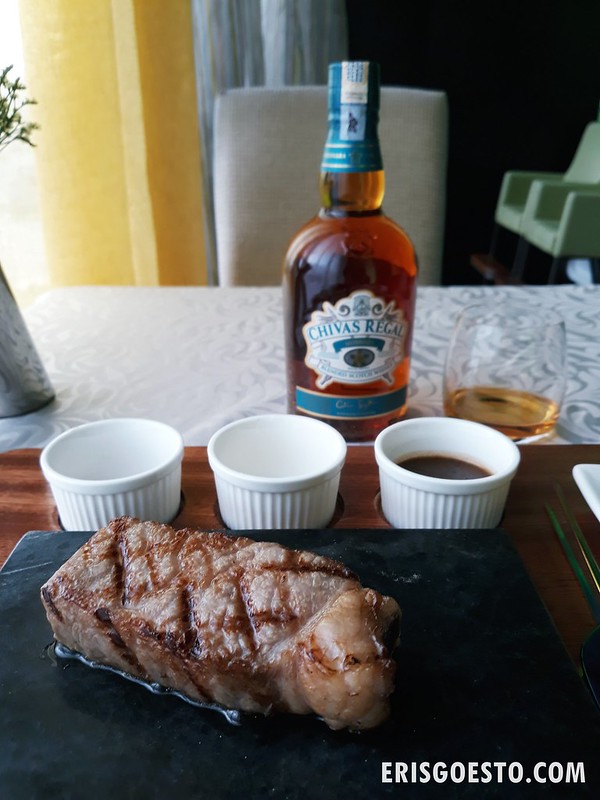 The Olive sources its wagyu from the Nishinoharu Farm, surrounded by fresh mountain spring water from the Kirishima Mountains. The cattle are fed on a diet of wheat, corn and grass for at least 900 days. They are butchered between 28-32 months – 8 times longer than commercial beef – and only four cattle are harvested at a time to ensure the best care of each animal. 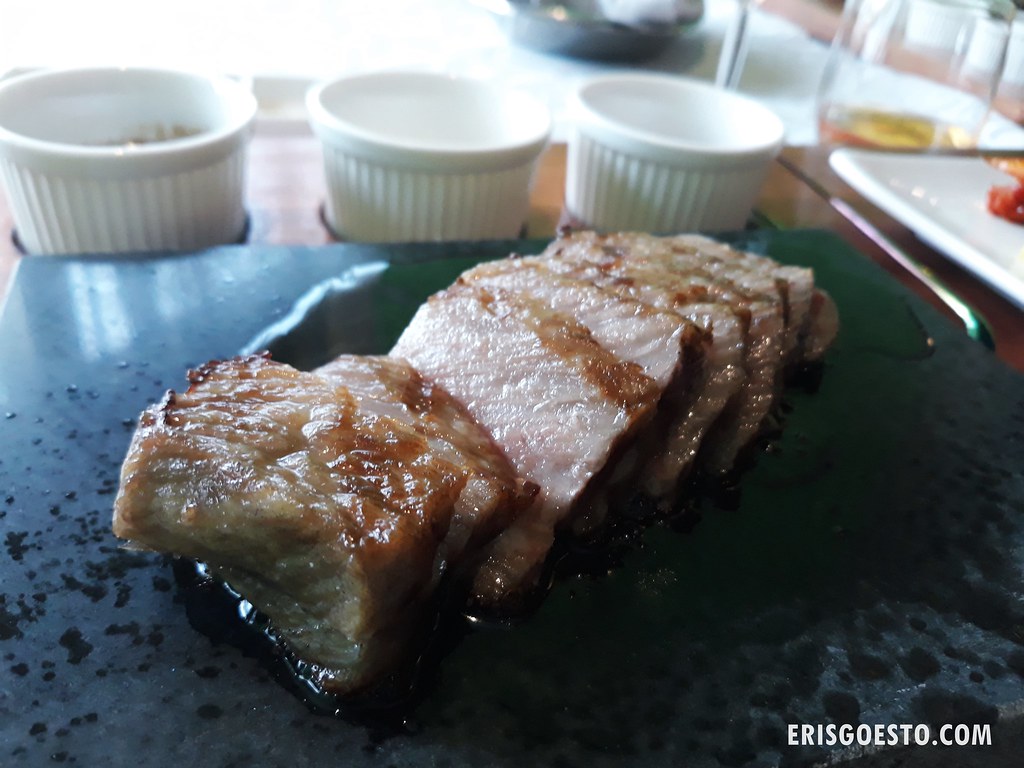 Tasting is believing – and the Wagyu did not disappoint.

Sliced into beautiful cuts and lightly torched, each bite was the perfect epitome of melt in the mouth texture, the beef’s juices spreading out over the tongue. Its buttery smooth disposition meant there was little chewing involved, and despite the high fat content, was not cloying. Even without seasoning, the beef had a savoury, pure meaty flavour that was excellent on its own. Pair it with a shot of Chivas Regal whisky for the ultimate indulgence. 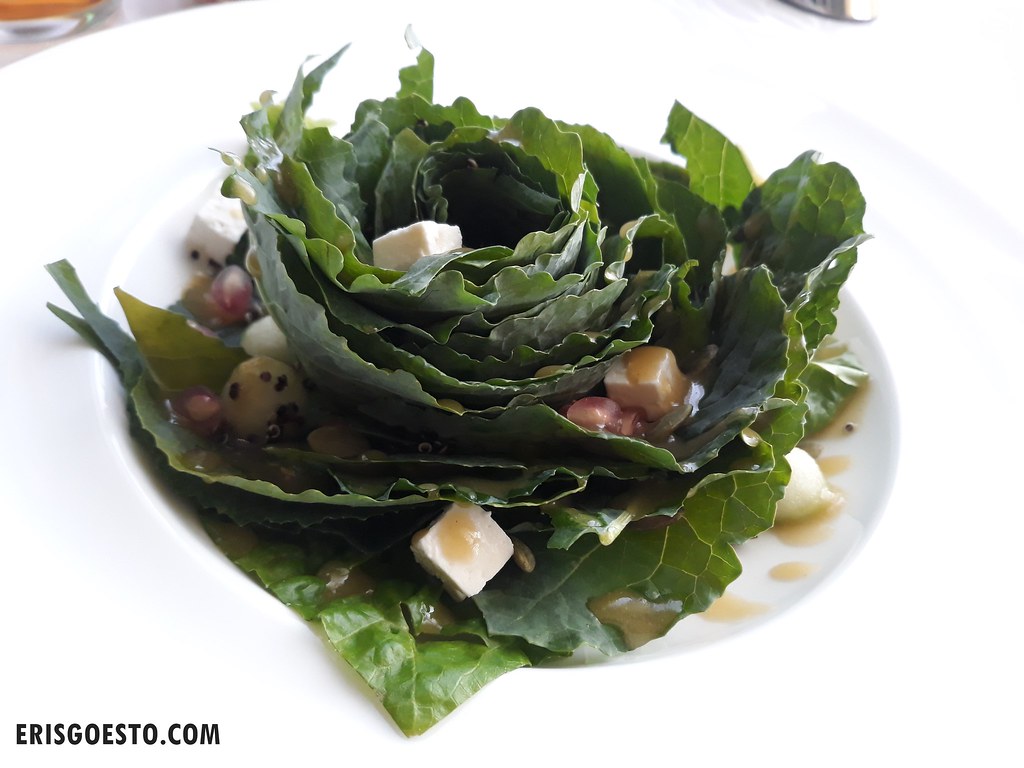 The highlight was definitely the beef, but the chef turned it into a satisfying three-course meal with an appetiser of salad, finishing off with dessert. The Quinoa and kale salad with pomegranate, feta, and maple dressing was a fruity, sweet-savoury mix and made for a refreshing palate-pleaser. One of the rare times I actually finished my greens! 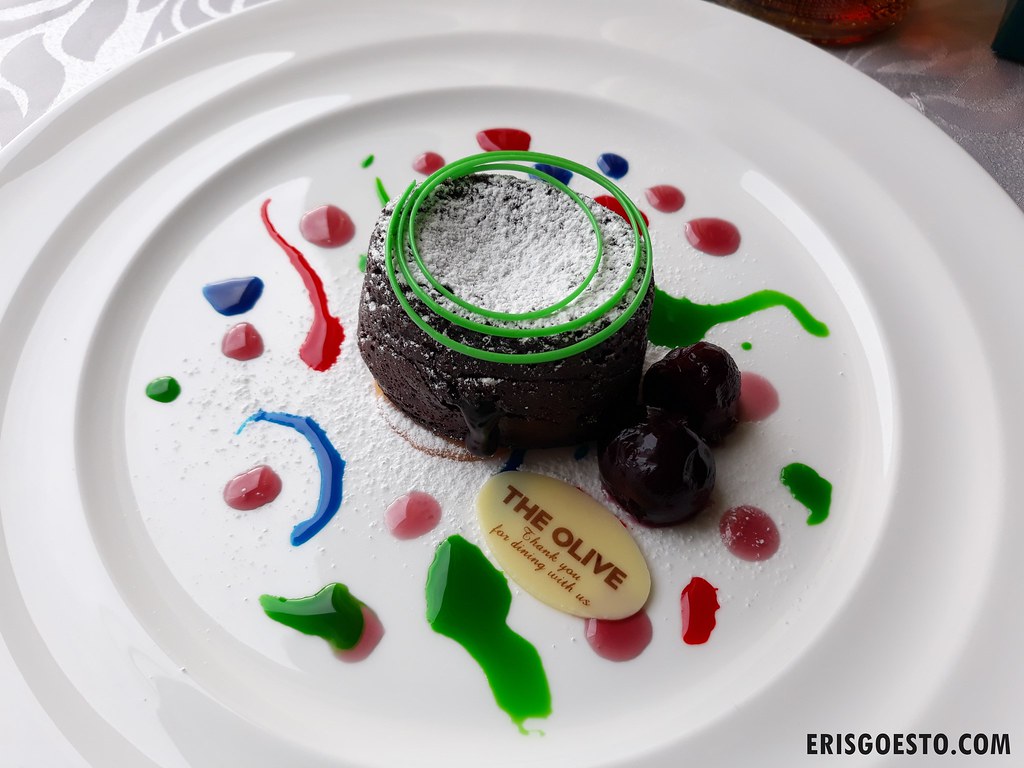 The meal ended off on a sweet note with the house special, Chocolate Lava Cake, which oozed warm, chocolate-y goodness as we split open its center. What made this unique was the accompanying cigar-flavoured ice cream – created by infusing the smoke from cigars into the ingredients. The slight bitterness of tobacco complemented the sweetness of the chocolate and vanilla-based ice cream really well. 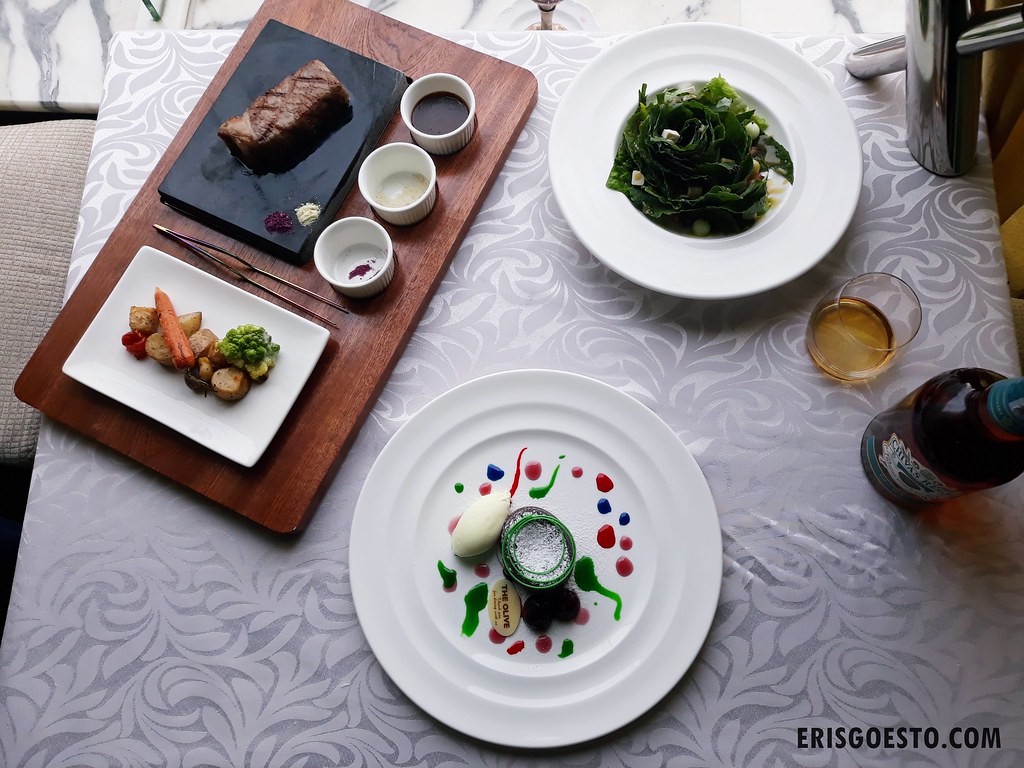 Miyazaki wagyu will be served at The Olive as part of the a la carte menu, priced at RM450 nett per 150 grams. The Nakanishi grade of Miyazaki wagyu is certified halal by JAKIM, with butchering process that is separate from farm’s process for the Japanese market.

The Olive is located on the Lobby Level of Genting Grand Hotel, featuring a European-inspired fine dining menu with an extensive selection of wines. Miyazaki wagyu served at The Olive differs in pricing depending on the grade of meat selected, with the Nakanishi grade being the highest. Dining hours are 6pm-11pm daily, while The Olive Bar & Lounge operates from 6pm-1am (Sundays to Thursdays) and 6pm-2am (Fridays and Saturdays). 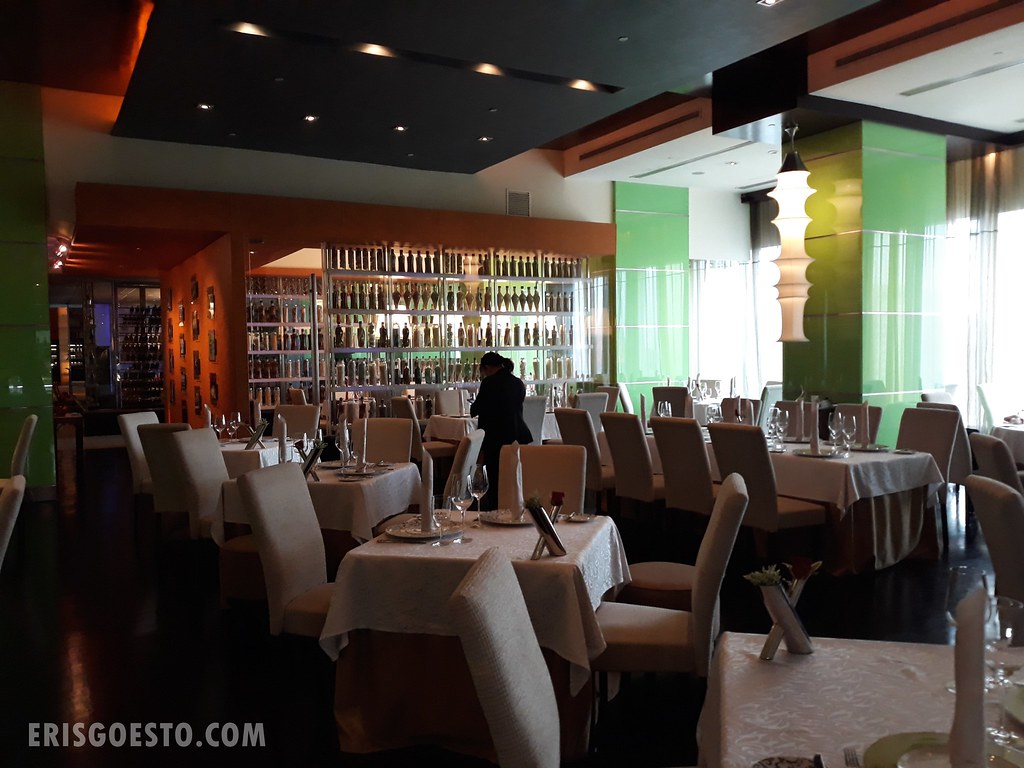 With its dim lighting, warm hues and attentive service, The Olive at Maxims, Resorts World Genting exudes elegance and class. The fine dining establishment, which has received numerous awards since its inception, specialises in Continental cuisine, which I got a small taste of during a recent visit for work. 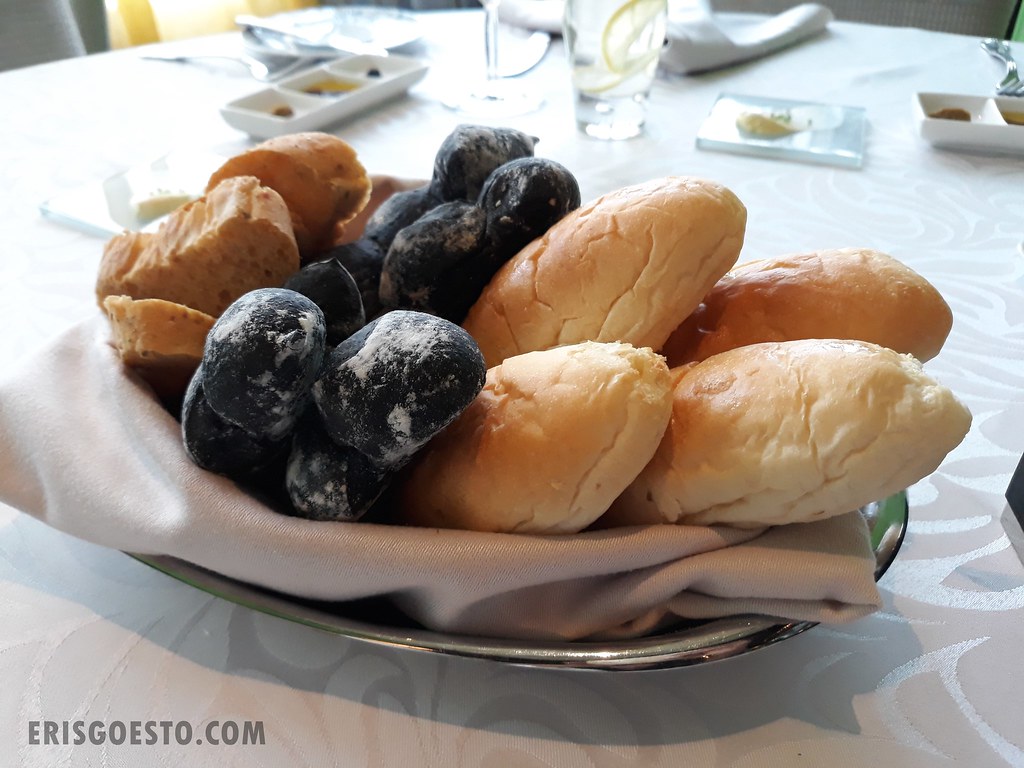 Kicking off the meal, there is the strikingly-coloured squid ink bread, which had a nice, crispy crust dusted lightly with flour. The exterior had a texture similar to baguette, but softer, while the inside was light, airy and fluffy. There was a notable, slightly bitter undertone, which I presume is from the squid ink, although it wasn’t unpleasant. 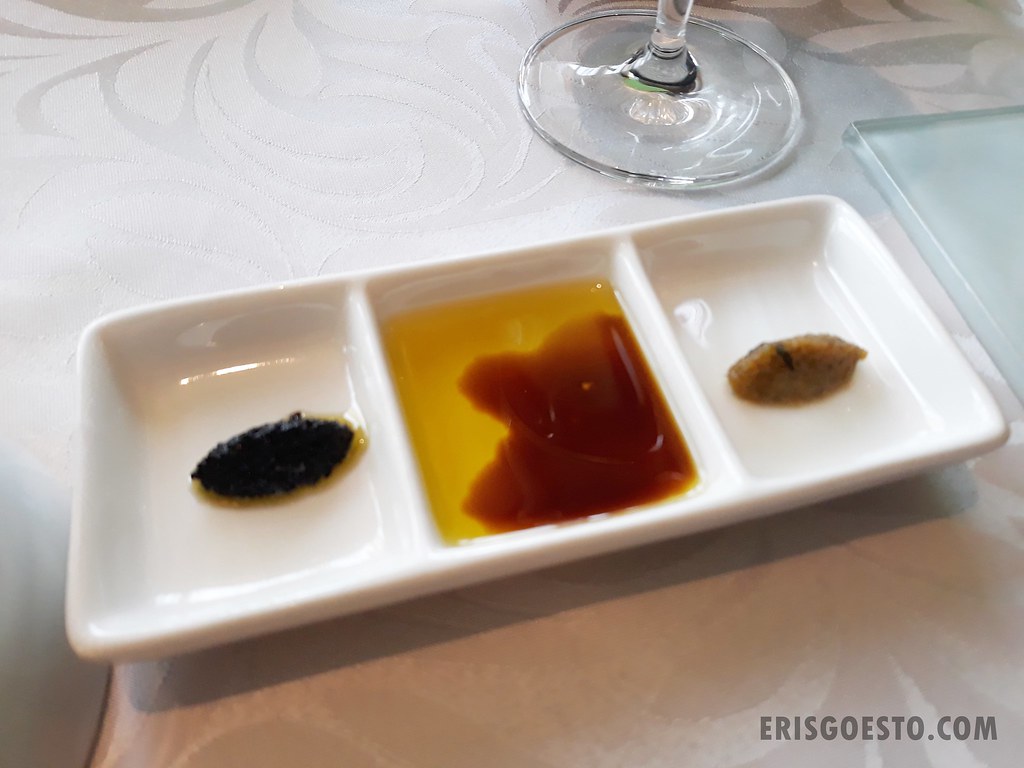 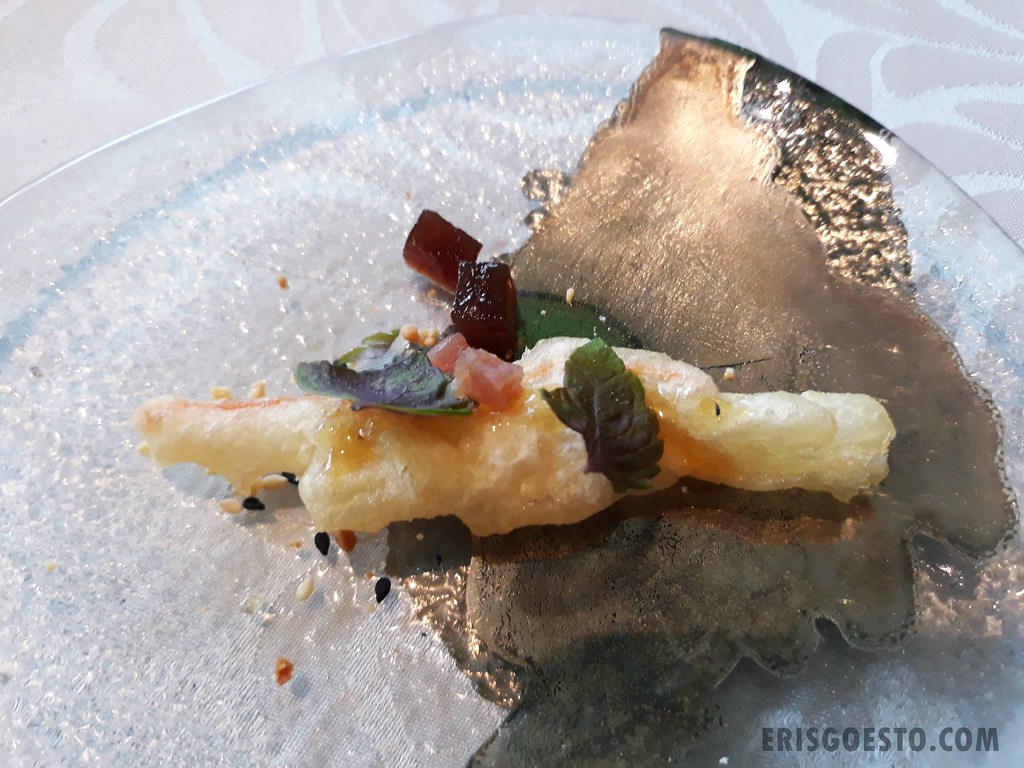 Amuse bouche of fried vegetable tempura, accompanied by jelly cubes and bits of fresh tuna. Wonderful blend of textures and flavours, batter was light and crispy, and the jelly cubes had a refreshing, citrus-like taste. 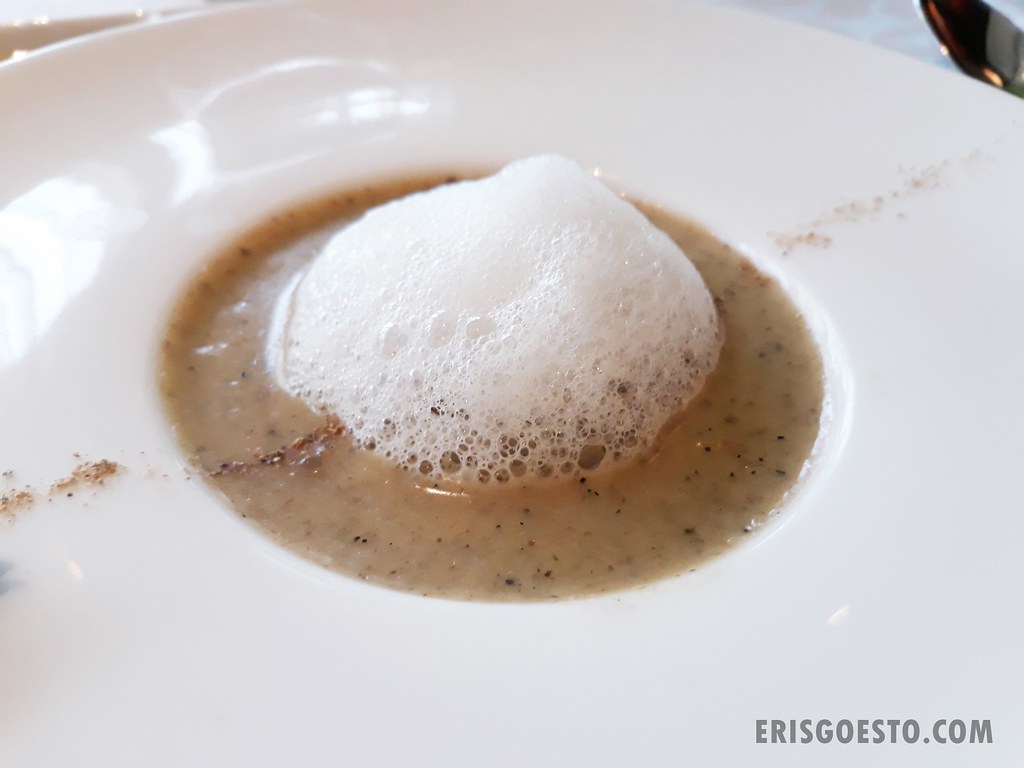 Mushroom soup topped with foam. Thick and chock full of ingredients, the flavours were well balanced and exhibited the rich earthiness of the mushrooms.

The star of the show was undoubtedly the Lobster Tail and Chilean Seabass with Orange Basil Sauce, Asparagus, and Mushrooms Ragout. This dish was specially crafted for our media visit, and as such, is not yet available on the menu. You can try the award-winning Chilean Seabass dish at the restaurant, just without the lobster tail.

The dish hit all the right notes, and was done with finesse. Huge, meaty chunk of seabass, perfectly done. Airflown into Malaysia, it still retained an amazing degree of freshness, and the flesh was naturally sweet and had a melt in the mouth texture. Asparagus was also done well, crisp and cooked to perfection. Lobster tail was sweet with a springy texture, and the orange basil sauce brought all the different elements together. Worthy of a five star establishment! 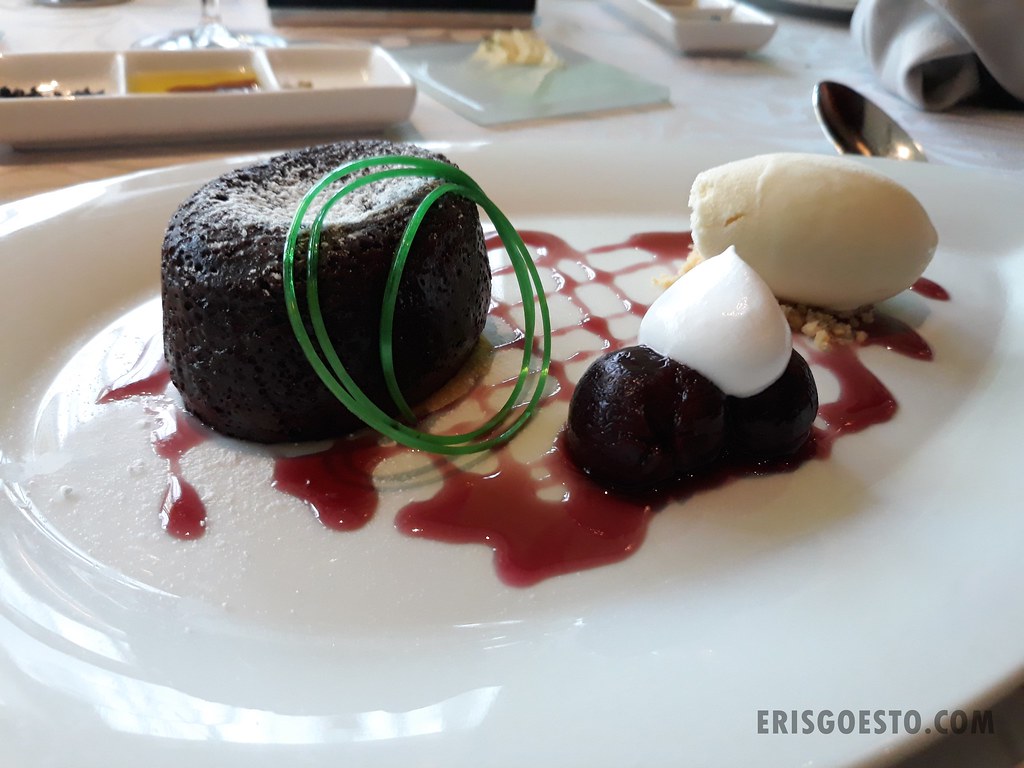 To end the meal, molten chocolate lava cake which oozed out beautifully when the cake was cut. It was a little too sweet, but the tartness of the fruit and the lightness of the ice cream cut through the flavours and prevented it from being cloying.

If you’re looking to impress a date while in Genting, or simply want to splurge a little with your casino winnings, opt for The Olive for its impeccable service, ambience and excellent food.

Hey guys! Here is the second part of my MIGF food tasting session at Resorts World Genting earlier this month. Was supposed to put this up earlier but couldn’t find the time to since these past few weeks have been crazzzzy. If you’d like to read the writeup I did for work, click here.

For those reading this for the first time, MIGF, short for the Malaysian International Gastronomy Festival, is a month-long fest where some of the country’s top chefs from restaurants all over the country whip up some delectable ‘festival menus’ which diners can enjoy throughout October. RSW’s two restos, LTITUDE and The Olive are both part of this event.

So after digging in to our scrumptious 10-course lunch at LTITUDE, we sauntered over to the The Olive, which won last year’s Golden Cauldron Award. This time around, expect similarly excellent fare as Chef Mohamad Radzuan returns to spearhead the kitchen with fusion and Western Continental-style cuisine.

First time having sea urchin! It tasted delicate and salty on the tongue, which was great when paired with the tangy sweetness of pineapple and the freshness of the cucuber basil. Super light on the palette.

The dish came with a white cloth pouch, so I initially thought the food was inside the pouch and we had to unwrap it in order to eat. Turns out the cloth had hot sea salt in it, and when lifted, lo and behold! Lobster carpaccio underneath. The flesh was meaty and sweet, while the lemon zest, orange and cilantro cress gave it a sour tang which was super appetizing and opened up our appetites for the next course. 🙂

The heavies started rolling in, first with the Pan-fried risotto with creamy wild mushroom and sundried tomato, garnished with Italian parsley and truffle. After our truffle feast at LTITUDE, I was aware that I was eating a lot of shrooms that day…but nobody ever said no to more mushrooms.

Rich, earthy and creamy flavours were jam packed into the sauce, but what I liked best was the risotto. Instead of the usual, we get a breaded block, which, when cut open, revealed fluffy bits of chewy rice on the inside.

This dish’s presentation was interesting, to say the least – the soup was served in a jar lid, which had been inverted on a bed of lavender salt. The lavender smelled like the type you’d use for aromatherapy sessions. The soup was good on its own, but the cod fish had sunk into the top knob of the jar lid and a lot of my media friends missed that chunk of meat. Also, the lavender salt was quite overpowering and it felt rather odd to be drinking soup when the smell reminds you of a spa ie smell + taste didn’t go well together lol.

Lamb usually comes with mint sauce, so I was surprised to see it served with mint ice-cream. That might sound weird initially, but trust me, it’s good – kinda like meatballs and Lingonberry jam. The meat, which came in a generous chunk, was perfectly pink on the inside, juicy and tender, while the ice-cream was cool and refreshing. Presentation was top notch as well; looked like a piece of art more than a food dish! 🙂

This was, according to the chef, one of the hardest dishes to prepare coz there are so many elements on it. You get different degrees of sweetness and flavours – creamy and rich slightly melted milk chocolate bar, fluffy creme brulee, sweetish-sour and citrusy pomegranate, sugary sweet marshmallow and naturally sweet caramel apple.

The Olive’s festival menu is priced at RM298 nett, and RM488 nett (with wine pairing).

MIGF is running until Oct 31 so go check out more details on migf.com, or rwgenting.com ! 🙂