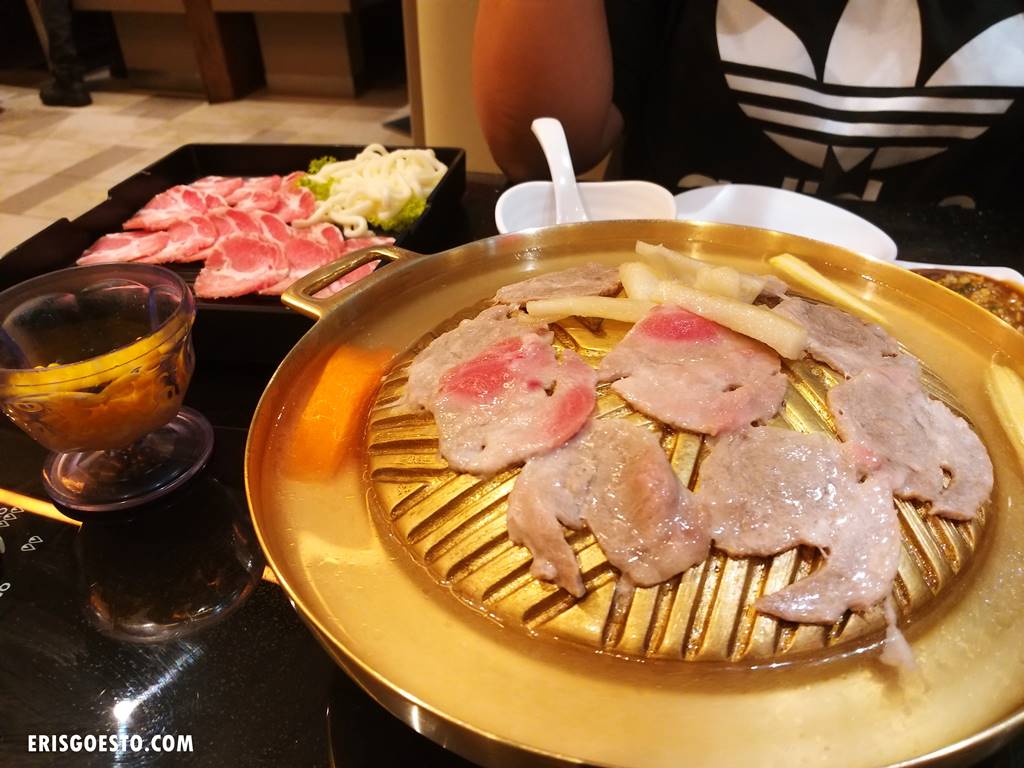 Mookata, commonly called Thai-style barbecue, comes from the words mu (pig/pork) and kratha (pan/skillet). Believed to have been inspired by Mongolian and Korean barbecues, the concept was first popularised in Thailand – and has since spread across Southeast Asia. In Malaysia, you will find many mookata joints, usually non-halal, that serve pork, seafood and meat, to be sizzled on a dome-shaped pan oiled with lard. All the juices from the grill then drips down into a shallow, surrounding ‘ring’ around the edges of the pan which contains soup – essentially flavouring it with whatever you’ve cooked and giving you an umami bomb unlike any other. Also, hotpot + grill in one? Genius idea.

While mookata joints are now a dime a dozen in Kuala Lumpur, one of the pioneers to enter the Malaysian market was BarBQ Plaza. They have not waned in popularity ever since, and currently have 18 outlets across Peninsular Malaysia, including one in IOI Mall Puchong. H and I came here for a late lunch after work, and since we were both famished after skipping breakfast, we decided to go for their All You Can Eat Refill promo, which is only available on weekdays.

There are two tiers: the Super Refill (RM46.90 for members, RM49.90 for non-members) lets you order everything on the menu, while the Happy Refill (RM35.90 for members, RM39.90 for non-members) gets you items on the bottom only. Personally, if you’re on a budget, I think the Happy Refill is good enough, but if you like a bit more variety, then the Super Refill is worth the extra 10 bucks. Both sets come with a ‘starter’ of either pork or beef; and then you can add on whatever you want, no limits. Drinks and desserts are also included, although you’re basically just limited to honey lemon, green tea, coke and ice-cream.

H and I were on a mission: to satisfy our pork cravings. So we started off with the pork set, which came with a side of udon and some vegetables.

The thing about BarBQ Plaza is that the meat is always sliced really thinly (so that it grills easier), but that also means that you rarely feel satisfied, and it always leaves you wanting more. With unlimited refill, you get 90 minutes to pack as much protein as you can.

The restaurant gave us generous amounts of lard to oil the surface and ensure the meat doesn’t stick.

I know it’s super unhealthy (which is why you should eat this once in a blue moon, or for celebrations!), but I highly recommend getting the Mozzarella Bacon. The cheese sticks to the pan, so I suggest grilling one side of the bacon first before putting the topping on the other side, so you get nice, crispy edges and a gooey centre. Speaking of which, I like my bacon to be chewy rather than crispy, which the Hubs deems blasphemous. How do you like your bacon?

To break the monotony of meat, we also ordered squid and a couple of seafood items like clam, prawn and fish. They were out of everything though, except for the squid.

Round 2: More Mozzarella bacon, more smoked duck, and Thai-style pork. There’s barely any sauce though so we couldn’t really taste the ‘marinade’.

BarBQ Plaza’s in-house special sauce is really something. I’m not even sure what they make it from, but it’s like crack lol. Especially when you add in garlic. It’s sweet and savoury, and helps to cut through the greasiness so you can eat more.

Now, I know that buffets sell you the illusion that you can get your money’s worth, since you’re basically limited to how much you can eat – but most people can’t eat that much, and buffets have done that calculation. How else are they going to turn a profit?

This time, though, I think it’s score one for Eris and H. Our bill came up to RM55 per pax, and I felt like we ate our money’s worth lol. It’s a shame about the seafood items. They also didn’t have dessert. Pro tip: come at 11AM; that way you can avoid the lunch crowd and they wouldn’t run out of items.

That being said, there are a couple of things that the IOI Mall outlet can improve on. They were understaffed, with only 2 servers on the floor, so it took some time for them to serve our tables whenever we requested for refills. Also, instead of telling us that some of the items had run out, the first server simply brought whatever they had out – so we kept thinking they had forgotten the items and kept ordering them on our next chit.