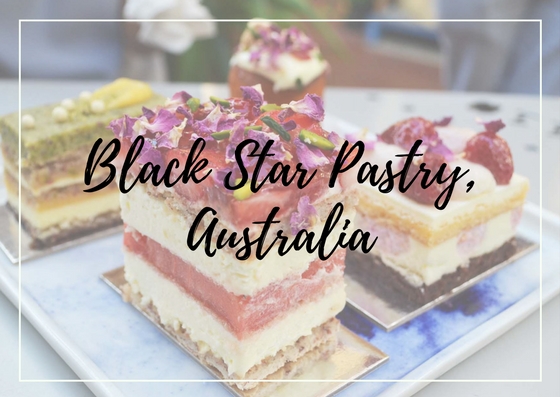 Like a sweet but fleeting dream, famed Sydney-based patisserie Black Star Pastry swooped into Melbourne… and made its exit just as quickly after a short stint as a pop-up store in the hipster neighbourhood of Carlton. The famous patisserie, which opened its first outlet in 2008, is the brainchild of Sydney chap Christopher The, whose philosophy on food design is for customers to taste fresh, wholesome ingredients through creative and innovative flavours.

I was fortunate enough to be in town in April to check out their Melbourne gig, and their signature Strawberry and Watermelon Layer Cake, dubbed ‘Australia’s most photographed cake’. Our little excursion led us down a quiet alleyway along University Street, where they were sharing a space with Cafe Italia. It was near closing time, but there were still lots of customers popping in and out for sweet treats.

The space was airy and well ventilated; despite the enclosed space the plants gave it an alfresco dining feel.

Glorious pastries and cakes on display, each seemingly better than the last. Their Chocolate Eclairs (centre), a classic item on the menu, looked beautifully coated in a shiny chocolate glaze, its insides filled with Valrhona chocolate creme.

We watched from behind a glass counter as one of the staff members laid out a huge slab of their signature – the Strawberry Watermelon Layer Cake – onto the stainless steel countertop, before proceeding to trim the edges into perfect, neat lines. The vivid colours, the richness, the visual appeal of the contrasting layers of red and cream was enough to send my mouth watering with anticipation.

We got a plate of their bestselling desserts to try. Of course, their signature Strawberry Watermelon Layer Cake was not to be missed. The cake was made up of two layers of almond dacquoise, with rose-scented cream and a sweet refreshing slice of watermelon in the centre. This was then topped with strawberries and garnished with pistachios and dried rose petals. Not your typical combo, but it worked surprisingly well together. There’s varied textures and flavours: crunchy pistachios, lightly creamy dacquoise, tart strawberries and sweet, crisp watermelon, all carrying the faint smell of roses which complimented the flavours rather than overpower them. A wonderful dessert – proving that it’s not just looks that make it popular among fans.

Other cakes also held their own. On the right: Raspberry Lychee Cake, which consisted of layers of raspberry marshmallow and vanilla cream atop a rich chocolate biscuit foundation. The lychee has a clear sweetness which contrasted well with the slight sourness of raspberries, the creaminess of the vanilla and the solid, decadent flavours of chocolate.

It’s hard to pick a favourite because they’re all so good! (Foreground – left) The Orange Cake with Persian Figs had an equally beautiful aesthetic, its circular shape distinguishing it from its square and rectangular cousins. Made from whole boiled oranges and almond meal, the lovely colour comes from it being doused with orange blossom syrup right out of the oven, giving it a deep, honey-like shade. The cake was then garnished with dried Persian figs, cranberries, rose petals, pistachios and candied coriander. I liked the texture, which was firmer and more solid, and the flavours were a nice balance of sweet, sour and tangy.

Meanwhile, the Black Sesame and Yuzu (foreground, right) was an awesome marriage of Western and Eastern flavours: a base of black sesame butter cake was  inlaid with creamy coconut mousse and topped with yuzu jelly and dai dai peel for a burst of citrusy flavours. 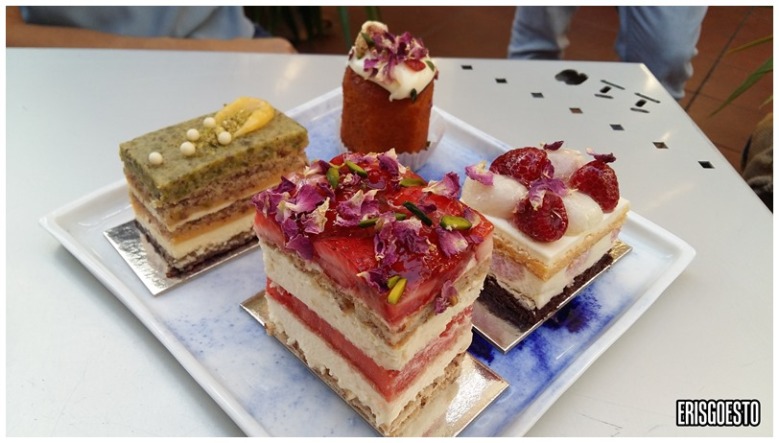 Another absolute must get at any Black Pastry Star outlet – their Custard Flan; reminiscent of the egg tarts one finds in former Portuguese colonies like Macau and Hong Kong. The baked pastry had layers that flaked off with each bite, filled in the centre with soft, bouncy vanilla custard and baked for a caramelised crust on top. A bit on the sweet side but being a sweet-tooth, the level was just perfect for me.

I was really impressed with the cakes and pastries at Black Star Pastry: no wonder they have such a good reputation among foodies, both inside and outside of Sydney! The pop up in Melbourne may have been temporary, but since it did so well during its stint, perhaps Melburnians can look forward to a proper expansion and store in the city soon? Fingers crossed. 🙂

In the meantime, drop by their (three!) outlets in Sydney at Rosebery, Sydney CBD and Newtown if you’re ever in the city!