My parents love Hokkien Mee. Whenever they crave for this stir-fried noodle dish, they’d always drive about an hour and a half to the city. Me, not being much of a fan, would politely decline because I didn’t want to get stuck in KL traffic on my precious days off lol. Closer to home, there’s Kim Lian Kee at Aeon Cheras Selatan. A branch of the famous stall in Petaling Street, the restaurant offers a comfy dining experience paired with amazing hawker fare.

Red everywhere – the walls, the seats.. tastefully complemented by classic wooden tables and beams. One side of the place is plastered over with blown up newspaper cuttings and pictures of famous HK celebrities. Opened in 1927 by Mr Ong Kim Lian in KL’s Chinatown, people came far and wide to taste his wok-fried Hokkien noodles. Business boomed and he opened a proper resto in the 1930s. Sadly, it was destroyed during World War II, when the Japanese invaded Kuala Lumpur. After the war, Ong’s descendants who had inherited his recipes decided to take up the mantle – and thus Kim Lian Kee was born.

“Lor Mee”. Thick yellow noodles in a starchy, eggy soup, topped with bits of fried lard. The noodles were chewy and springy, but the broth was rather tasteless and there were not too many ingredients in the soup. For RM14.90, it is quite expensive but the portion is big.

Their signature Hokkien Noodles. Thick, yellow noodles are stir fried over a big fire so that it seals in all the flavours, and then cooked with fried lard and dark soy sauce with pork/chicken and vegetables. True to their name, the version here did not disappoint as the sauce, which coated the noodles perfectly, was rich and creamy without overpowering the taste buds. Nyum. 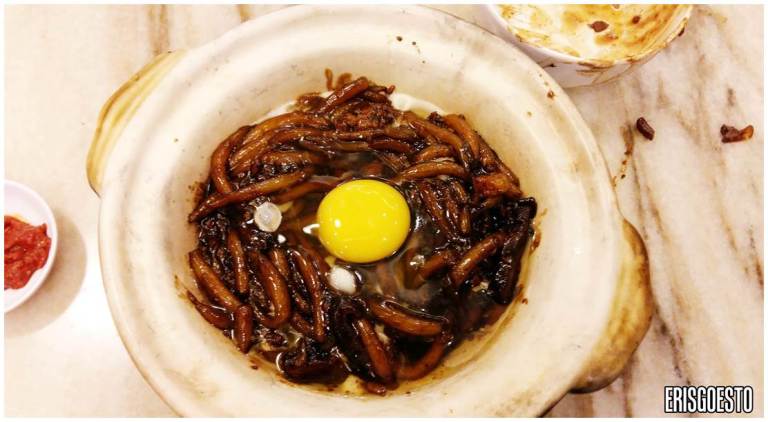 Also had the Claypot Lou Shee Fun with egg. Noodles shaped like rat tails (ha) cooked in a pot of marinated minced meat, lard (yes, lard. Not very good for the arteries, this meal) and a whole raw egg on top. Mix it into the piping hot noodles so that it cooks and creates a smooth, creamy coating around the noodles. Blissss.