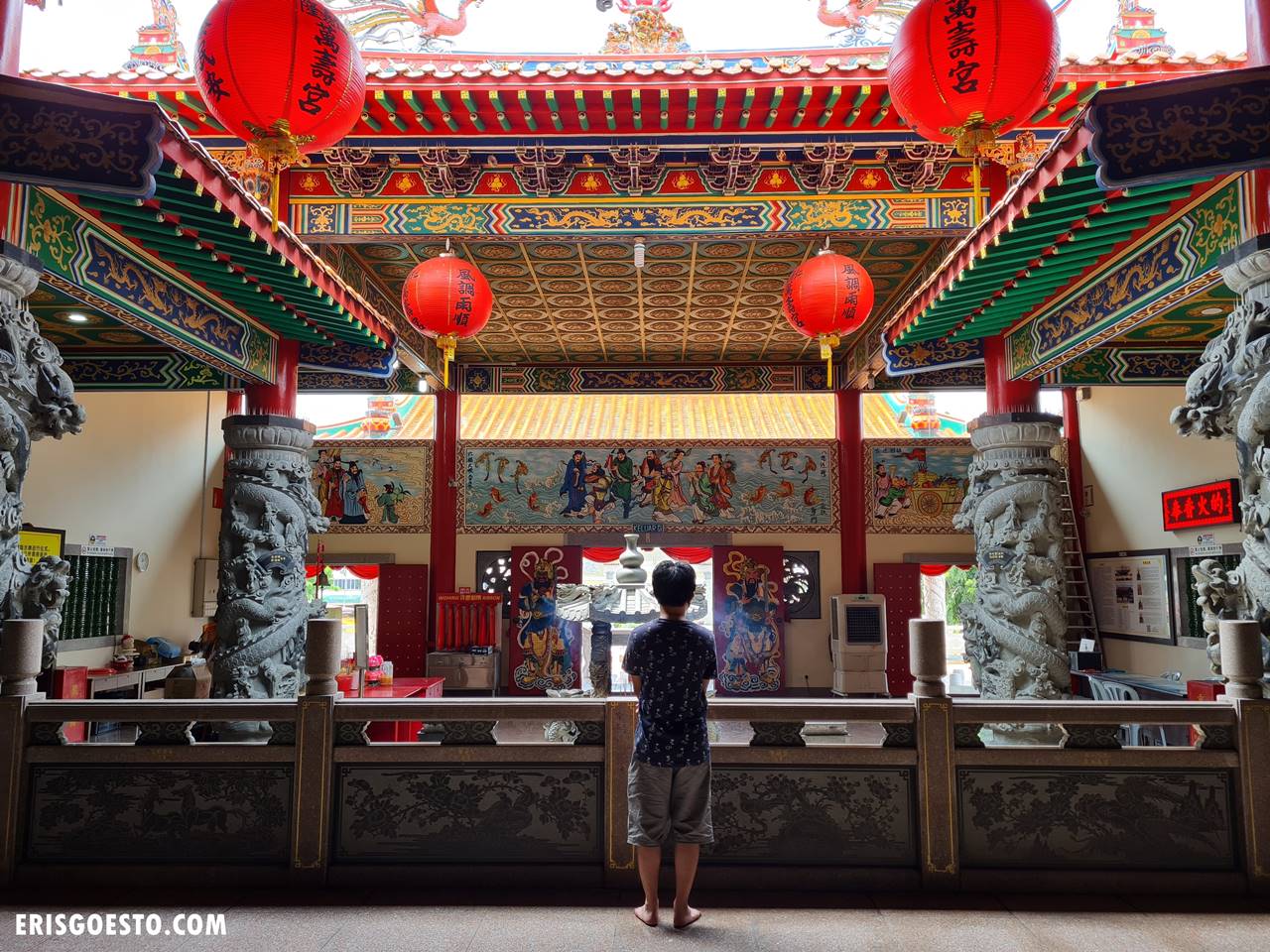 It has been months since I last traveled anywhere other than a mall for groceries (due to the COVID situation in Malaysia) – but since travel restrictions have recently been eased, the fam and I decided to go on a quick day trip to Jenjarom over the weekend.

Tucked between Banting and Klang, about an hour’s drive from Kuala Lumpur, Jenjarom is a mid-sized town with a population of about 30,000. The town grew from a Chinese new village – settlements that the British set up during the height of the communist insurgency in Malaya so they could keep an eye on the local Chinese population – which is why a majority of the current Jenjarom residents is Malaysian Chinese, of Hokkien descent. In the 1990s, when youth unemployment soared, the area became infamous for gangsterism and other social ills such as prostitution and gambling.

Thankfully, these days, the town is better known for its tourism, especially from the Fo Guang Shan Dong Zen temple, a massive temple-cum-attraction by the Taiwan-based Fo Guang Shan monastic order. Chinese New Year is a good time to visit, as the temple holds a grand celebration every year, complete with stunning decorations. (I visited in 2017; read about it here.)

Although FGS gets more tourists, there’s actually another temple within town that is worth a visit. Enter Ban Siew Keng, which is located just a stone’s throw away from FGS.

The story goes that there used to be four small Chinese temples in Jenjarom, each dedicated to a deity. It was costly and difficult to have four celebrations for each deity, so in the 1950s, the villagers pooled their money and resources to build a temple to house all the deities under one roof. Thus, Ban Siew Keng was born. The original building was a simple wooden structure, but it has since been renovated into the grand structure that we see today. The temple grounds have also expanded to include parking spaces, a food court, and a small but well kept park.

Even the furnace for burning offerings is beautifully decorated!

Ban Siew Keng’s architecture is typical of many Chinese temples, in that it mixes elements of Buddhism, Taoism and Confuciusnism, as well as those of Chinese culture. Think red lanterns, dragons coiled around stone pillars and scenes of Taoist gods like the 8 Immortals hand painted on the walls, fierce-looking ‘door gods’ (they’re deities that guard the temple against evil spirits).

The design here actually reminds me of Thean Hou Gong temple in Kuala Lumpur, especially the combination of red pillars and green roof tiles with blue and gold dragon motifs. Like Thean Hou temple, Ban Siew Keng also has a ‘dome’ on the ceiling above the altar, with a dragon at its centre surrounded with beautiful carvings.

I also like the open space they have in the middle of the temple, which resembles the courtyards you find in old Chinese mansions. This allows for plenty of natural sunlight to filter in, so the space feels bright and airy. Despite the sweltering heat outside, the temple is quite cool, thanks to the lofty ceiling and marble floors.

The main altar is a spectacular piece of work, intricately carved and painted over in gold and red.

The caretaker said it was okay to take a closer look, so I went right up to the front of the altar. Although it was mentioned that the temple was built to house four deities, there are actually five at the altar, including a Buddha. I recognised one as Guanyin, the Goddess of Mercy in Taoism and Buddhism. The caretaker mentioned the name of the principal deity, but I forgot coz he told it to me in Mandarin and y’all know my Mandarin sucks, lol. 😛 There are two sets of statues on display. I’m guessing the smaller ones are from the original temples, as they look a bit weathered.

In the old days, fortune tellers would setup their shop either within or outside the temple. You would get a ‘cheem’, or fortune stick, by shaking it from a wooden container until one fell out, then take the stick to the fortune teller to have your fortune interpreted. These days, temples use these contraptions where all you have to do is bunch up your sticks and drop them into the hole at the centre – the one that sticks up is your fortune. You then look for the slot corresponding to the number on your stick, and voila! Fortune.

Unfortunately, the fortunes at this temple are written in Chinese, unlike the ones at Thean Hou temple where you also get an English translation. So once again, my banana-ness proved to be a disadvantage.

You can get a wishing ribbon to toss over the branches of the tree outside. This is more a cultural rather than a religious thing; in the old days, people would write down their wishes on ribbons and if you manage to snag it over a tree, your wish would come true, that sort of thing.

The park outside is small but good for a short stroll. You can take photos with the 12 Chinese zodiac animals. Guess what my sign is?

So if you’re coming to Jenjarom for a daytrip, do stop by Ban Siew Keng! FGS is a great place to visit and it’s much larger, but I think Ban Siew Keng has its own charm, and a very interesting history. It stands as a monument to the resilience of Jenjarom’s people, and how they’ve made a life for themselves from a small Chinese new village to the town it is today.

Your best bet is by car, as there doesn’t seem to be a lot of public transport to Jenjarom. According to Moovit, the Wawasan Putera bus 730 stops at Jenjarom between Banting and Klang, and its 734 bus travels the route between Pasar Seni in Kuala Lumpur and Banting, with a stop in Jenjarom.

If you like this content, consider supporting me on Patreon. You can also buy me a cup of coffee on Paypal. Happy travels!