Been meaning to blog more, but like the stereotypical millennial, I’ve been making poor life choices lately (like staying up until 3am every day. To play Witcher 3.)

This post was inspired by a recent hotpot dinner, where I ordered century eggs. Whenever I have them, I’m reminded of a good friend of mine and how horrified he was when I sent him a picture of my “rotten” dinner (century eggs with porridge). This coming from a Finn, who eats blood cakes for lunch and enjoys salmiakki as a treat lol.

Jokes aside, I can see how food in some cultures can be viewed as gross to others. Before sushi was popularised in the West, many considered the idea of eating raw fish downright unhygienic / disgusting. But as with everything else, cultures and attitudes can change – and I think people are much more adventurous these days when it comes to food. So without further ado: here’s a fun list of ‘bizarre’ foods (I love that show, by the way) that I’ve tried. Let me know what you think and if you’d be willing to try them! 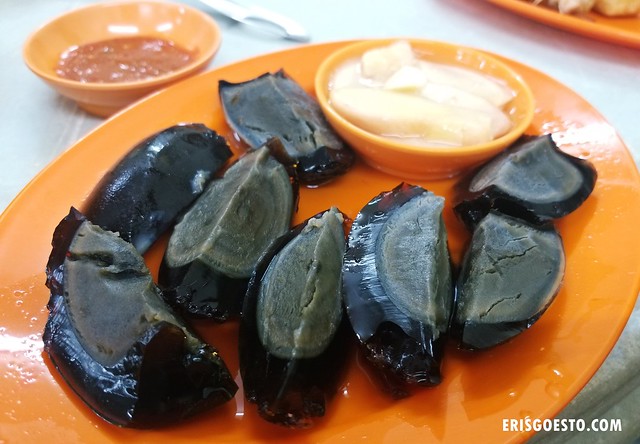 For those who have never seen a century egg, it’s understandable to think it’s rotten – especially since the yolk is completely black and the albumen takes on a translucent, jelly-like appearance. A traditional delicacy in China, they are typically made from duck, chicken or quail eggs preserved in a mix of ash, clay, salt, quicklime and rice hulls for up to several months. The eggs have a pungent odour of hydrogen sulfide/ammonia, which comes from the preservative mix.In Malaysia where there is a large Chinese diaspora, century eggs are pretty common, and you can get them at the local market or Chinese grocers.

How it tastes: The jellied part tastes just like regular hard boiled egg but saltier, while the yolk has a rich and creamy consistency that is almost like avocado. Traditionally, century eggs are eaten together with slices of ginger (to cut through the pungency), but I like having it chopped up in porridge or served with noodles.

If there’s one food that epitomises the saying ‘its bark is worse than its bite’, it would be stinky tofu – a popular snack at night markets in China, Taiwan and Chinese-centric areas in Malaysia. As the name suggests, stinky tofu is, well, stinky. The best way I can describe it is if you mixed unwashed socks with the smell of wet dog and sewage, lol. The odour is a result of the tofu’s fermentation: traditionally, the tofu is marinated in a brine made from fermented milk, veggies and meat (recipes vary), and left to soak for several days to months. It is then served in soups, steamed or deep fried.

How it tastes: If you can get over the vulgar odour, stinky tofu is actually quite tasty, with a crispy exterior and light, fluffy insides. Here in Malaysia, it is usually served deep fried with a topping of chilli and various seasonings like soy sauce, which helps to mask the smell a little. It also has a somewhat… addictive quality. You know like how stinky feet is stinky but you’re still sort of drawn to it against your will ? …. or is that just me?

Yes, yes, we Chinese do love our preserved/ fermented food stuffs – but you have to understand that most of these were created in a time before refrigeration existed, so people had to come up with all sorts of ways to keep food edible for months, sometimes years. Fermented beancurd is commonly used as a condiment in Chinese cuisine, and there are several varieties, most of which have strong, pungent flavours (see a pattern here?). They are also nutritious, since tofu is very high in protein and contains virtually no cholesterol. Think of it as Chinese cheese.

How it tastes : Tofu on its own has no taste, so the beancurd takes on the flavour of whatever it is brined in. The most common type is the white one which has sugar, salt, chilli and rice wine. If you think about the culturing, it’s not unlike kombucha. Personally, I prefer the red fermented beancurd (nam yu) which incorporates red yeast rice. It has a pleasant, thick and rich aroma – great for deep fried pork ribs!

Sometimes I think this is why people say the Chinese eat all sorts of sh*t, lol. Officially it is called hasma (in Cantonese, we call it ‘suet kap’) – basically dried fatty tissue from the fallopian tubes of certain types of frogs, typically the Asiatic Grass Frog. It is whitish in appearance, has a slimy texture, and is used as an ingredient in dessert soups. Back in the day, it was a luxurious item that would only be served to emperors and nobles. When I was a kid, my mom would boil these because in traditional Chinese medicine, suet kap is believed to have multiple health benefits, such as being good for the skin and respiratory system. I guess if I was an adult and someone told me I was eating frog fallopian tubes, I’d be hesitant but since I literally grew up eating this it doesn’t seem so gross.

How it tastes : Like birds nest, hasma is tasteless on its own, and is usually flavoured with rock sugar in dessert soups.

Ah, the king of fruits. I’m not a diehard fan as some of my fellow Malaysians are – if you served me durian I’d probably eat it – but I wouldn’t go out of my way to look for it. Malaysians love durian though: we even have ‘durian buffets’ where you can eat to your hearts fill.

Durian has an extremely pungent smell. There have even been cases where buildings were evacuated due to ‘suspected gas leaks’ – turns out someone brought some durians on-site. Personally I don’t find the texture or flavour intolerable. BUT. I have been told that durians that have been shipped overseas taste gross, because of how it has been shipped / the durians are way past their prime. Then again, Andrew Zimmerns had a freshly opened durian in Asia, and he described it as having a ‘taste like completely rotten mushy onions’. So, if you ever get to try it, I’ll let you be the judge.

How it tastes : Heaven … or hell. There is no in between. For me, it has a texture and taste similar to sweet custard, but with a much stronger flavour.

Escargots are a good example of the powers of branding. How else can you explain why snails – something people usually see as slimy and icky – are considered a gourmet delicacy, served in fine dining restos and high-end establishments? Escargot is associated with French cuisine, but it is served in many parts of Europe. The snails are usually from the species Helix pomatia. Here in Malaysia, we have our own version, called balitong – small sea snails that are a pain to suck out of their shells and have a texture similar to a chewy clam, cooked in sambal/chilli.

How it tastes : I had escargot once, on my grad trip. It was cooked in garlic butter which made the dish very fragrant, and the snails had a bouncy texture which I enjoyed.

Weird as some of the items on this list may seem, I enjoy most of them – with the exception of salmiakki. Also called salty liquorice, it is a common confectionery in Nordic countries. The candy is flavoured with salmiak salt (ammonium chloride), giving it a strong astringent and salty taste. These days, you can find salmiakki flavoured ice cream, chewing gum and even alcoholic beverages.

How it tastes: My Finnish friend sent me a box of these. I love you bud, but by god. Our friendship was tested that day. It was not only extremely salty to the point of being bitter, for some reason it also reminded me of burnt rubber tyres – like if someone tried to make that into a flavour, it would taste like salmiakki.

You know shit is real when Japs, known for their extreme politeness, react this way lol.

Eating insects is considered taboo in the West, but here’s a fun fact: insects are eaten by about 80 percent of the world’s population, a practice known as entomophagy. In recent times, companies are trying to introduce insects into the Western diet as part of the sustainability movement, since they are extremely high in protein and available in abundance – making insect-eating much more environmentally friendly. For some countries, eating insects stems from a history of poverty; people had to make do with whatever they could catch. Deep fried insects, such as crickets and grasshoppers, are common street food snacks in countries such as Thailand, Vietnam and Cambodia. 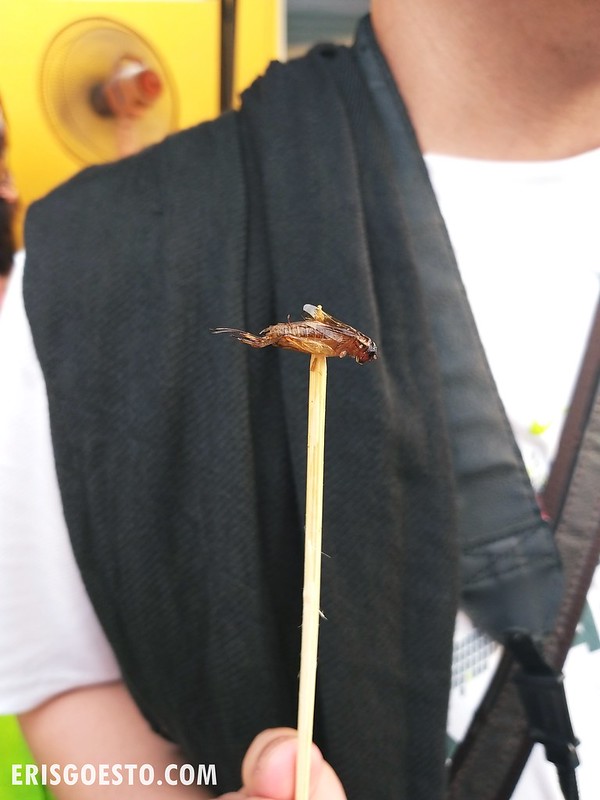 How it tastes : I don’t really like insects – how they look, how they crawl, etc. so it was difficult to get over that mental barrier of eating them. Took the plunge on a trip to Phuket. They didn’t taste bad or anything – it was just like eating crispy whitebait (I had crickets). The silkworms had a chewy exterior and crumbly insides, which I actually liked more than the crickets.

The idea of eating a developing duck/chicken embryo sounds abhorrent. But if you think about it, balut is really just that – an egg. With a baby duck in it. And feathers. lol.

Commonly sold on the streets in the Philippines, balut eggs are boiled and eaten from the shell, with the eggs incubated for a period between 14 to 21 days. You crack it open and suck out the broth, dip it into some vinegar or salt, and eat the yolk and the chick.

How it tastes : I first tried balut in LA’s Filipinotown. I consider myself a pretty adventurous eater, but even I couldn’t stop the involuntary churning in my stomach as I cracked the shell open and saw the half-formed chick inside. When I finally summoned up enough courage to eat it, I was… surprised. It just tasted like egg / chicken (I mean, duh). Still, not something for the faint-hearted.

What are some dishes in your culture that other people might see as weird / exotic? Share them with me in the comments below! 🙂

3 thoughts on “Stinky Tofu, Durian & Insects: Would You Try These ‘Exotic’ Foods?”