Today’s post is going to be a long one – it’s about my weight loss progress and how dealing with my personal issues helped with it.

My weight has always been a touchy subject for me, but I feel that I’m finally ready to share my thoughts on it, how I’m trying to overcome challenges, and hopefully help others who are in the same predicament.

For the longest time, I felt like shit about how I looked.

As an Asian with a larger-than-average physique, I grew up with body image issues; no thanks to relatives and a toxic culture that glorifies a certain body shape/look. And while the body positive movement has been going strong in the West for awhile now, attitudes in Southeast Asia (and many parts of Asia, for that matter) are still notoriously slow to change. Partly, it has to do with our ‘collective’ culture: in the West, being different is good; in Asia, as the Japanese saying goes, ‘the nail that sticks out gets hammered down’.

Growing up, I was not exactly chubby – but I was definitely taller and bigger than my peers. By the time I was 14, I was taller than my mom (who is 5 feet and weighs 40 kilos). The running joke among members of my extended family was “what genes did Nim (my nickname at home) inherit? lol”  since my dad is also around 5’4, and my younger brother is as petite as my mom. It didn’t help that I was constantly told things like “don’t eat so much, you’re getting fat”, or “your breasts are too big, you shouldn’t wear those kind of clothes” by people who were close to me, which really affected my self confidence. Were my boobs that big? Was I eating too much? I ended up wearing a lot of shapeless hoodies and slouched whenever I walked, because I was made to feel that men would look lustfully at me if I didn’t hide my chest. That it was my fault if I somehow attracted their attention.

When I was 19, I went through a traumatic experience. I wasn’t able to find the support I needed, and basically had to deal with the entire thing alone. I believe it was then that I started to comfort-eat. My metabolism at the time was still that of a teenager, so I could still eat junk and all kinds of shit without putting on weight, but it laid the foundation for the very unhealthy eating habits that would persist into adulthood. These bad habits worsened when I entered the working world, and I found myself putting on a lot of weight. It was a vicious cycle – I’d get stressed, eat for comfort, feel disgusted, and eat again for comfort. And this went on for years and years. At my heaviest, I was 82 kilos (181 lbs). I have a big frame so it was not extremely noticeable, but if you passed me on the street, you’d definitely call me fat. Obese, even.

My weight became a point of contention between me and my mother, so much so that there were heated fights that nearly resulted in us severing ties with each other. I know she was trying to help in her own way, but being an Asian parent, she was notoriously bad at showing it. (you know, like when they do something wrong, instead of apologising, they make your favourite food and try to skim over the whole thing?) Instead of encouraging me, she (sometimes unconsciously) shamed me, which hurt me more than what strangers could ever throw at me: because the one person who should be standing on my side wasn’t understanding. So I gorged on food and let myself go.

Some people who have never suffered food addiction think that it’s simply a matter of willpower – that some people can simply will themselves to lose weight. That is a simplistic way of looking at things. There are people who have superb willpower (which is awesome, more power to them!) but weight loss and the journey to a healthy lifestyle is not a one-size-fits-all solution. Oftentimes, comfort eating is deeply rooted in psychological issues. If you’ve ever watched my 600-lb life, Dr Now, the resident doctor, often addresses the person’s emotional issues as part of their therapy, because their eating behaviour is often rooted in those unresolved psychological problems.

The reason I eat isn’t that I’m hungry – it is because food equates to comfort, and since I am not able to find it anywhere else (such as a good support system), I turn to eating when I’m stressed, or angry, or sad, or bored. You can go cold turkey on ciggies, or drugs, but you need to eat to live – and this makes things a lot more complicated when it comes to weaning yourself off an unhealthy relationship with food.

Since 2013, my weight has yoyo-ed dramatically. Back then, I had anxiety (still do, but it’s slightly more manageable these days), which was not helped by the stressful nature of my work (I was a newspaper journalist). It drove me further down the rabbit hole of unhealthy eating. Stress does things to you. Many of my ex-colleagues smoke and drink, and a good number die from heart attacks, which is a common disease among journalists.

Sometime in my mid-20s, I tried Herbalife. It worked while I was taking it, but once I stopped, the weight came back on again, because the bad habits were still there, and the psychological issues that drove me to comfort eating were still there. It’s true what they say about magic pills. There is no such thing.

And so it continued … until this year. In retrospect, despite all the bad things that have been happening around the world (pandemic, riots, uncertain economy, etc.) this quarantine has been good for me, because it allowed me to take a break and re-centre myself. Previously, I’d spend three hours in traffic each day, so much so that I’d feel too tired to work out (I left home around 8.30AM and got home around 8PM). But now that I have a more flexible working schedule, I’m able to set aside some time each day to unwind and do activities that I enjoy.

Another major reason that I think contributed to a positive change is my relationship with my mother. Those who have family members suffering from anxiety and depression know how hard it can be to deal with. Thankfully, our relationship has improved lately. As a result, my overall mood and feelings have improved, and in turn, I no longer feel as much of a need to binge or comfort eat.

What makes the attempt to lose weight different this time, you ask?

You often hear weight loss stories where they ask the question, ‘what kickstarted your weight loss journey’? Most of the time, the answer would be ‘I woke up sick and tired of being unhealthy’. And perhaps that is the main motivator for many people.

For me, I think the catalyst came a couple of months ago, after a particularly nasty fight with my mom (related to my weight, again). I think she finally understood that her way of ‘helping’ was doing more harm than good – and she agreed that she would not comment further about my weight.

See, it wasn’t that I didn’t appreciate her ‘help’. She’d make home-cooked meals for me in an effort to get me to eat healthily. But it wasn’t the support I needed.

You know how some people fight because the other doesn’t understand their needs? Like a boyfriend gives a girlfriend a teddy bear even though the girl has already said she doesn’t like stuffed toys, then he gets upset because she ‘doesn’t appreciate the gift’. The same applies here. I know she was trying to help in her own way, but it wasn’t what I needed. I needed her to step back and stop commenting about my weight.

The thought that I had finally broken through to her gave me courage. I now had the freedom to do things my way.

To other people, this might seem like an odd line of reasoning. But to me, growing up with the need for approval to make my parents proud, to be a ‘filial’ daughter, it makes perfect sense. I was finally free from the shackles of ‘what was expected’ of me; that I had to heed certain advice and follow them simply because my family felt it was best. The moment I no longer felt burdened by the fear of what my mother thought I should do, the power was in my hands to do with my life as I see fit – and that became my greatest motivator. (does that even make sense? the human psyche is an odd thing. lol).

It might come as a surprise to some people, but when I was at my lowest point, I did not care if I had pre-diabetic symptoms due to my weight – my thought process was basically “If I die, I die because I’m already like a piece of shit anyway”. I think that a lot of obese or fat people with health issues KNOW that they are in a bad state (don’t you think they know people are sniggering behind their backs? I certainly did) but the hole of despair can seem too big and too difficult to climb out of, so you switch to this apathetic state where you give up on trying or caring.

People say that a healthy lifestyle is not a sprint, but a marathon. I started this journey just over two months ago, so there is a long way to go. But I think the difference this time is that I am in a better psychological state to commit to the race, because my reasons for losing weight have changed. Now, I truly feel that I want to lead a healthy lifestyle for myself, and not for someone else’s approval. 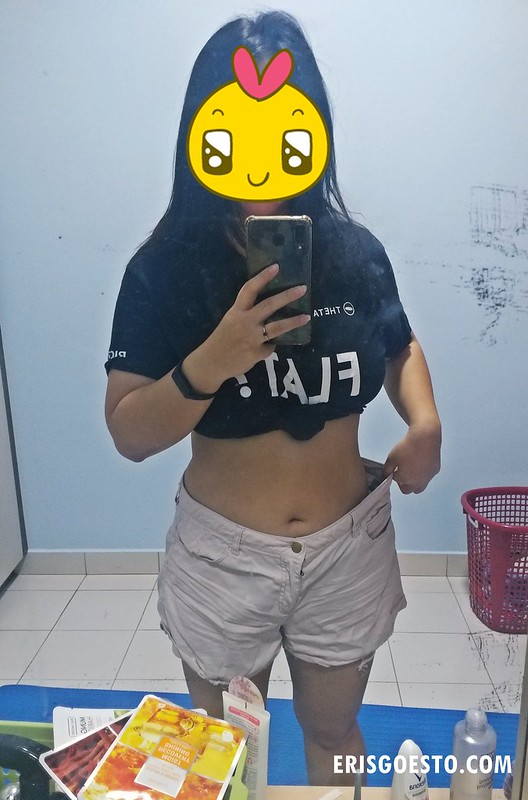 PS: I actually started writing this post on a somewhat related note (I wanted to talk about how my weighing scale broke and it was actually a good thing) – but somehow it became super long…so I think I’ll write about that in another entry. 😀