Hey guys! Hope you had a great Lunar New Year!

One of my good friends had her wedding ceremony recently – and I was honoured to be one of her bridesmaids! It was my first time, and I thoroughly enjoyed it. Not only was it a happy occasion, but I also learned a lot of fascinating things about Malaysian Chinese wedding culture.

Hold up, you ask. Am I not Malaysian Chinese?

The short answer is yes. The long answer is that I am a third culture kid, so I’m quite out of touch with my own roots. (My Indian ex-colleague, who was also there as a bridesmaid, said she felt like she was attending it with a non-Chinese friend lmao.)

If you’ve always wondered how a Malaysian Chinese wedding is like, read on!

Weddings are usually a whole-day affair, starting with a tea ceremony in the morning. Chinese society is patriarchal, so a woman ‘belongs’ to the husband’s family once she is married – the reason why sons are more prized than daughters. (It’s BS but we shall not get into an argument about the patriarchy here, lol). As such, the groom goes to the bride’s house to take her home with him.

Prior to the wedding date, the couple would have consulted a monk / master at the temple to determine the most auspicious day / time for this to happen. In Helen’s case, we had to be there early as Hong had to leave the house by 8AM. 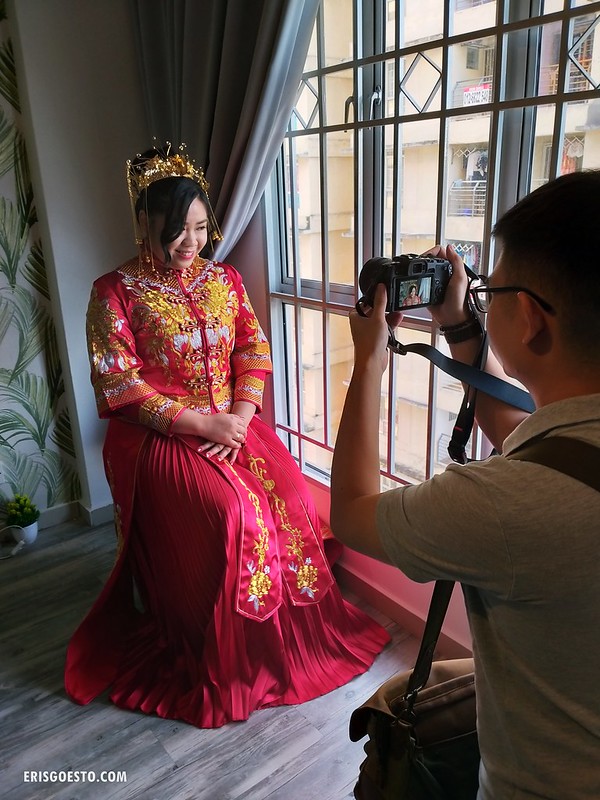 The bride looking resplendent in a traditional ‘kua‘.

Unlike the cheongsam, which is form fitting, the kua is modest, and is often elaborately embroidered with motifs such as flowers, dragons and clouds in gold and white. 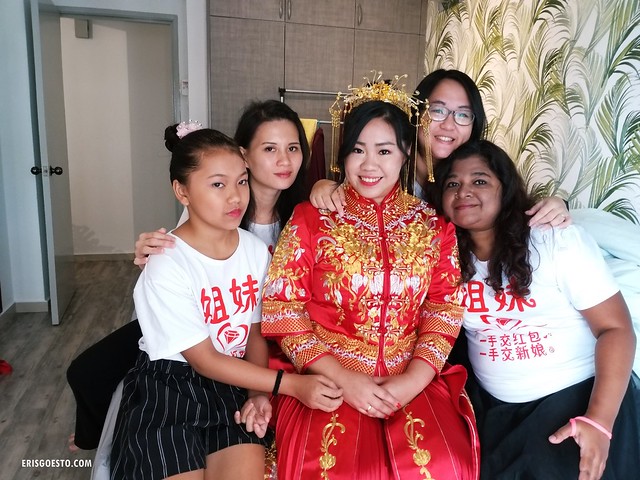 Aside from my ex-colleague and I, Helen’s best friend Mui, her cousin and 2nd sister (not in the picture) acted as bridesmaids. The shirt says ‘Jie Mei’, literally, ‘sisters’. 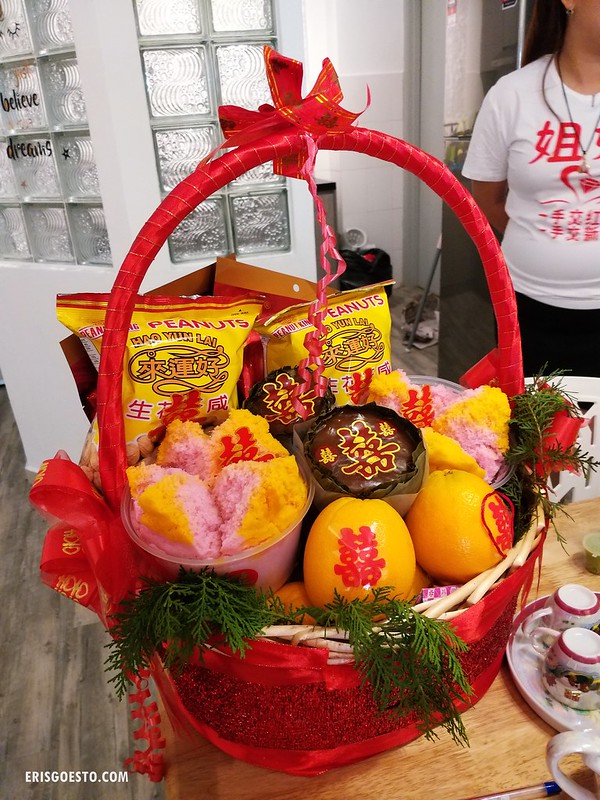 Helen had arranged for a dai kum (chaperone) to help manage proceedings. A Dai Kum’s role is akin to an emcee – she will ensure that rituals are done accordingly, all the while announcing good tidings and wishes to the new bride and groom.

The dai kum arrived ahead of Hong’s entourage with a basket of gifts for the bride’s family – 10 mandarin oranges (to represent completeness; from the saying “10 chuen 10 mei” meaning perfection), cakes, sticky niangao (wishing for the couple to stay sweet and ‘sticky’) and peanuts. 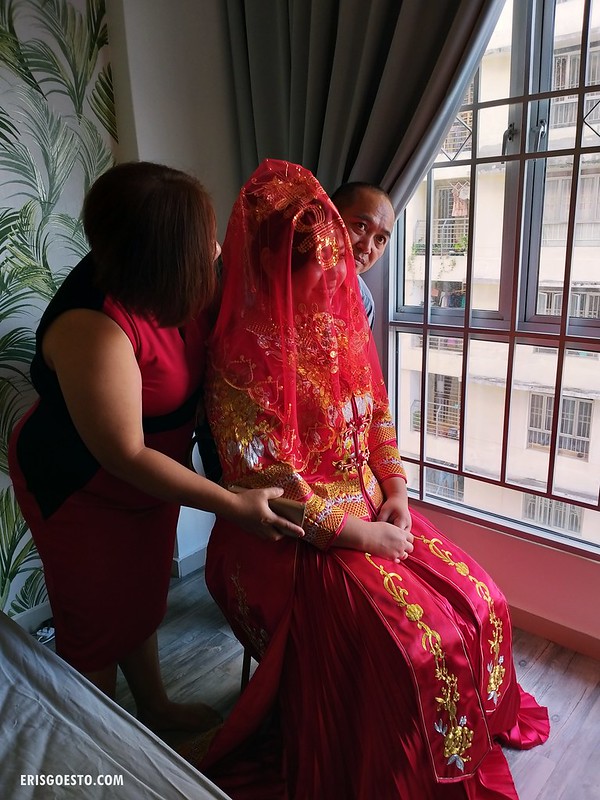 Veiling of the bride by her elders. The veil may not be removed by anyone other than the husband-to-be, after which they are considered man and bride. 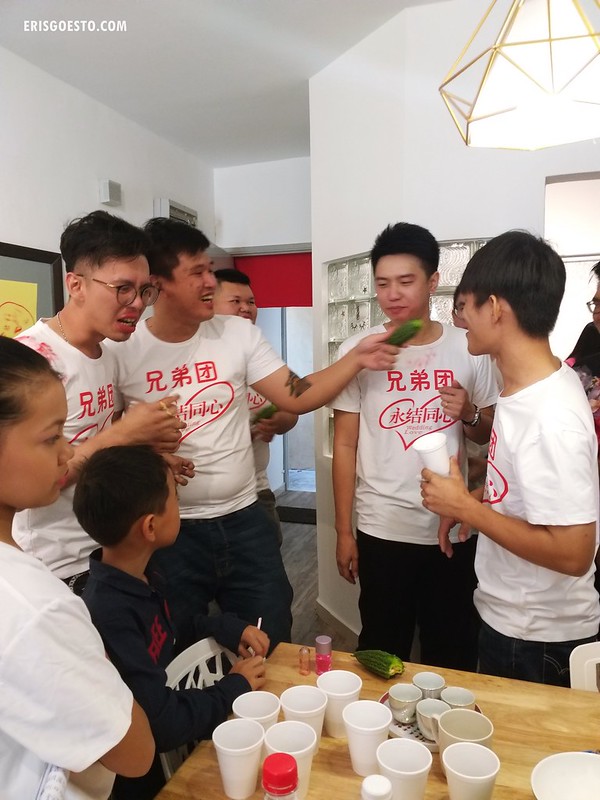 So what were we doing as the bridesmaids? Well, the groom had an entourage of ‘brothers’ – our job was to rag them with door games, of course! Traditionally, the bridesmaids act as doorkeepers, because no way the groom is able to waltz in so easily and claim the bride. The door games involved the brothers doing silly tasks, and the groom had to fork out red packets filled with money to demonstrate his sincerity. It was all in good fun though!

Some of the games we played: 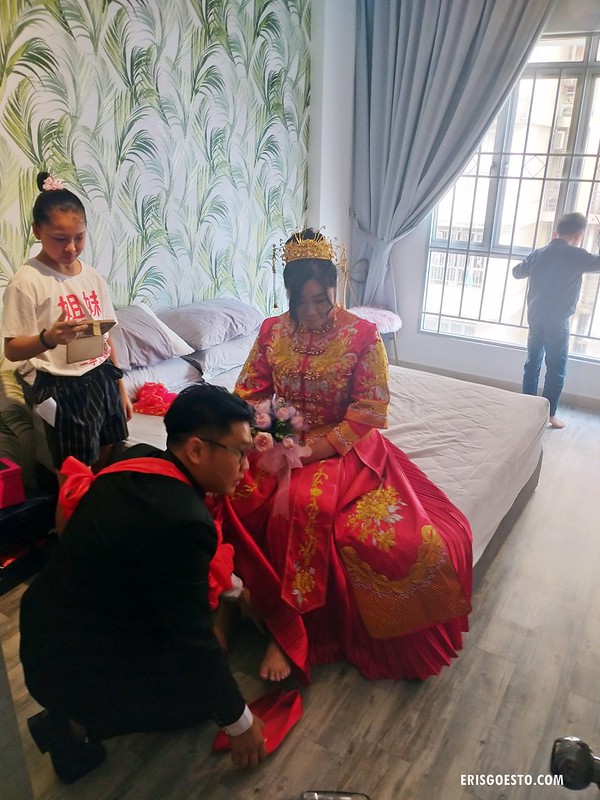 When the groom was finally ‘allowed’ into the room, the bride was there waiting for him. She looked very demure in her dress and veil. Hong got down on one knee with a bouquet of flowers, and asked Helen to receive him. After she accepted the flowers, he lifted the veil, kissed her and slipped on new red shoes for her. Shoes are a homonym for ‘harmony’, hence auspicious tidings. 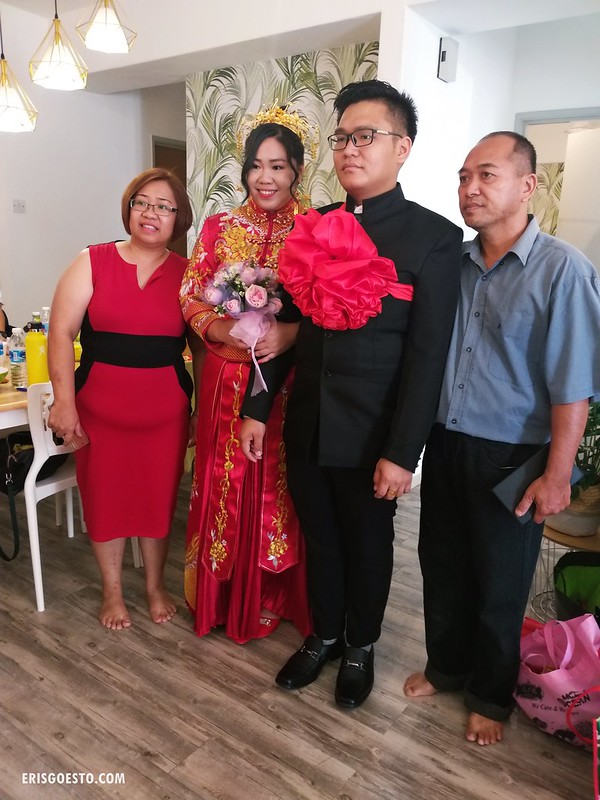 Helen and Hong, with Helen’s sister and brother-in-law. 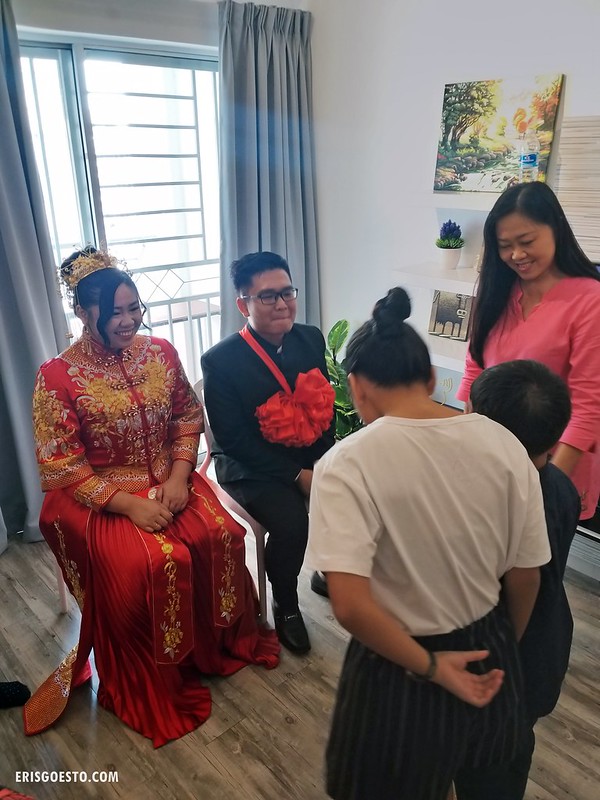 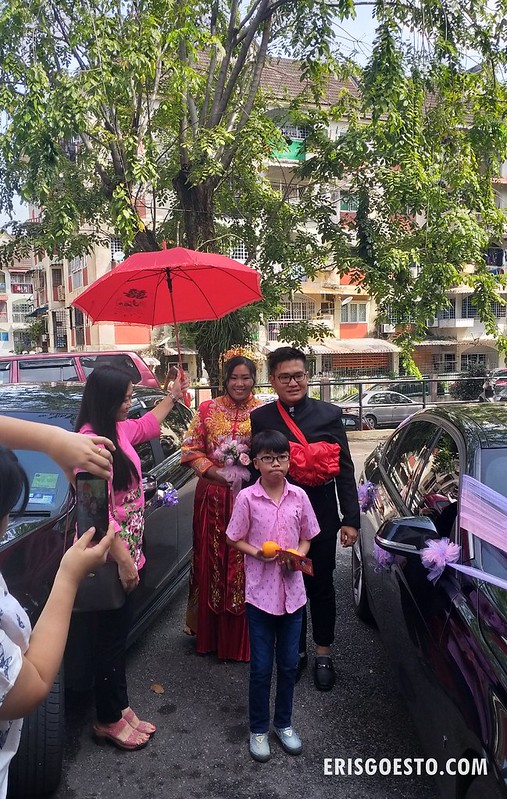 The couple’s vehicle door can only be opened by a younger, unmarried male relative, in exchange for a red packet. The groom and bride cannot open the door on their own. 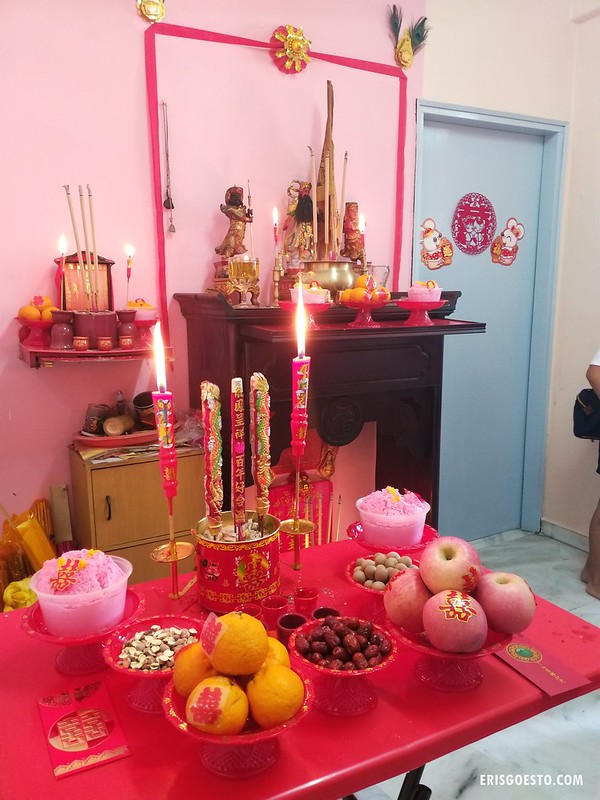 Prayer paraphernalia at Hong’s house. The tea ceremony was essentially the same as the one at Helen’s place, minus the ragging.

Some parts of the ceremony were changed to fit modern times. For example, the visit to Hong’s house was ‘symbolic’ – it was actually his parents’ house, since Helen and Hong already have their own house. We drove to their house for a buffet lunch, and also to visit the bridal chamber. 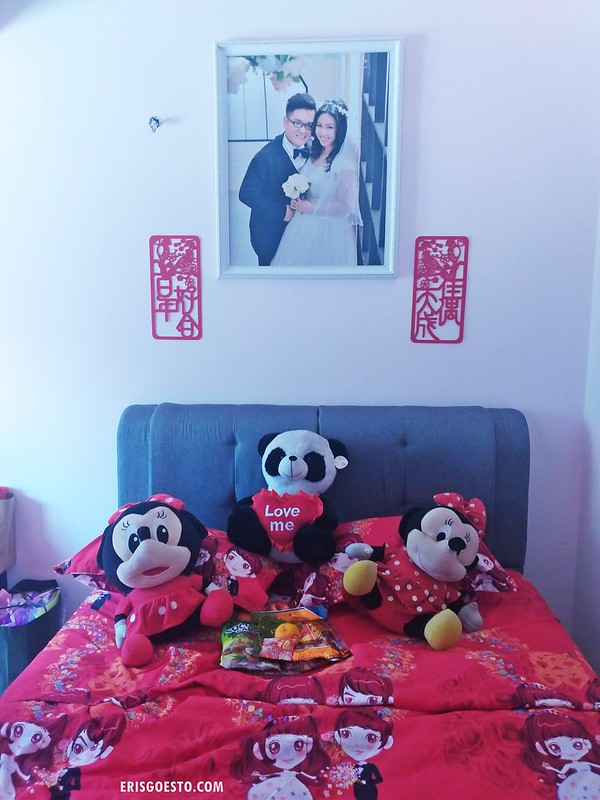 The bridal bed should be new and have new bedsheets; preferably red.

In the evening, the couple hosted a Chinese-style banquet at Hee Lai Ton in Pudu, Kuala Lumpur. The concept is more akin to Western-style wedding ceremonies, with a sit-down dinner and different courses of dishes being served throughout the night. There were print outs of the couple’s wedding photos, which guests could take back as souvenirs, as well as a banner that they could sign. 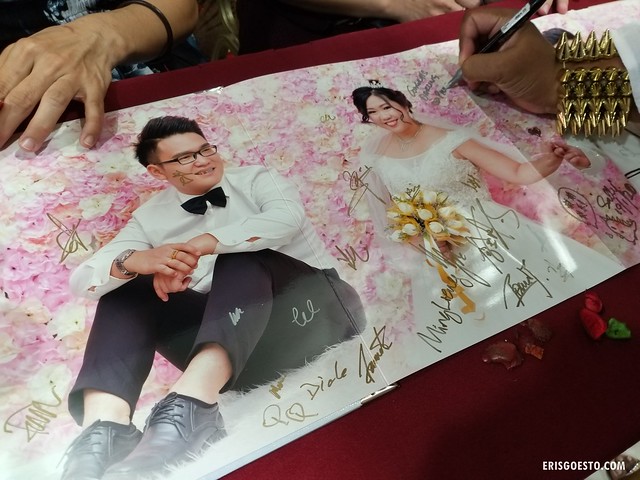 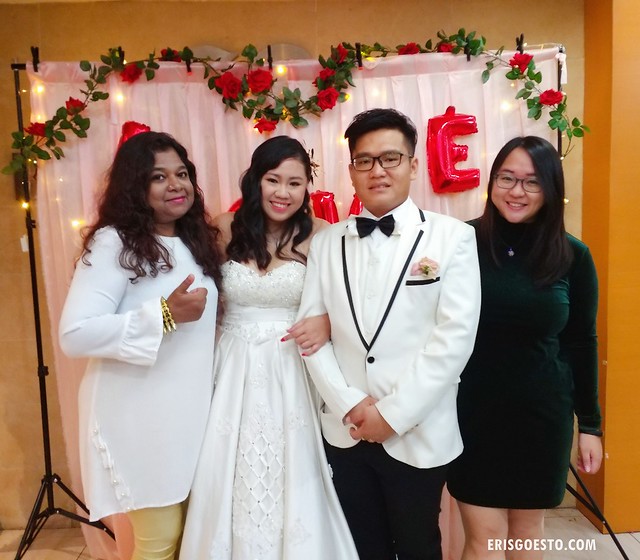 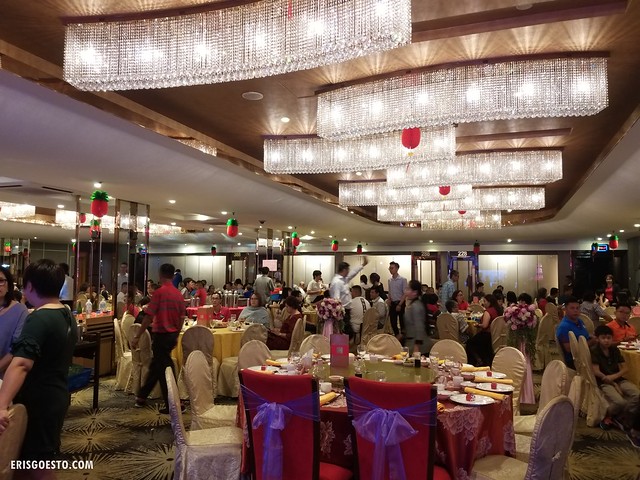 The couple was busy throughout the night entertaining the many guests, so we didn’t see them much. Good thing we managed to squeeze in a few photos! 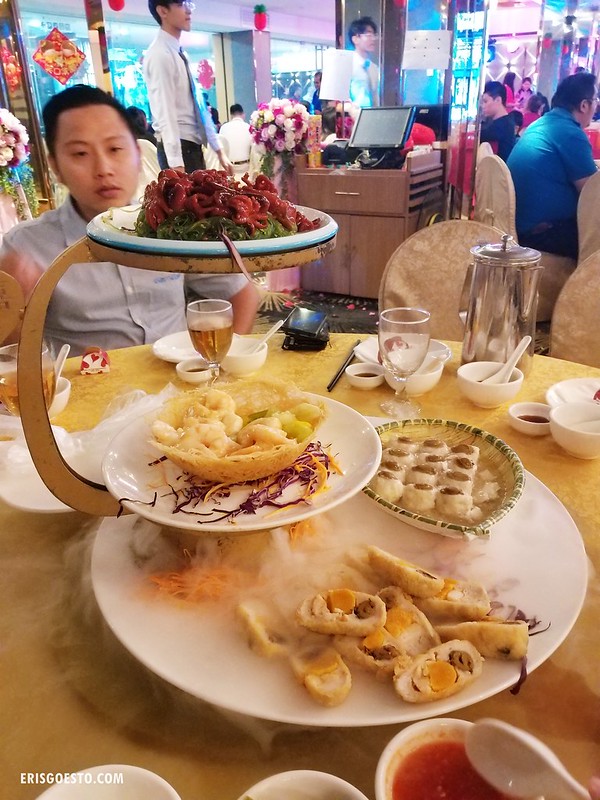 The food at Hee Lai Ton was surprisingly good – we started off with a cold platter of appetisers comprising marinated baby octopus, fried fish cakes with salted egg, and there was also steamed fish and a bomb Iberico pork ribs platter. 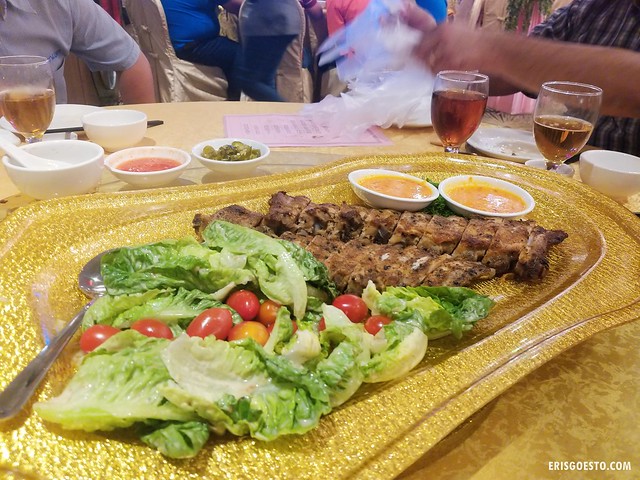 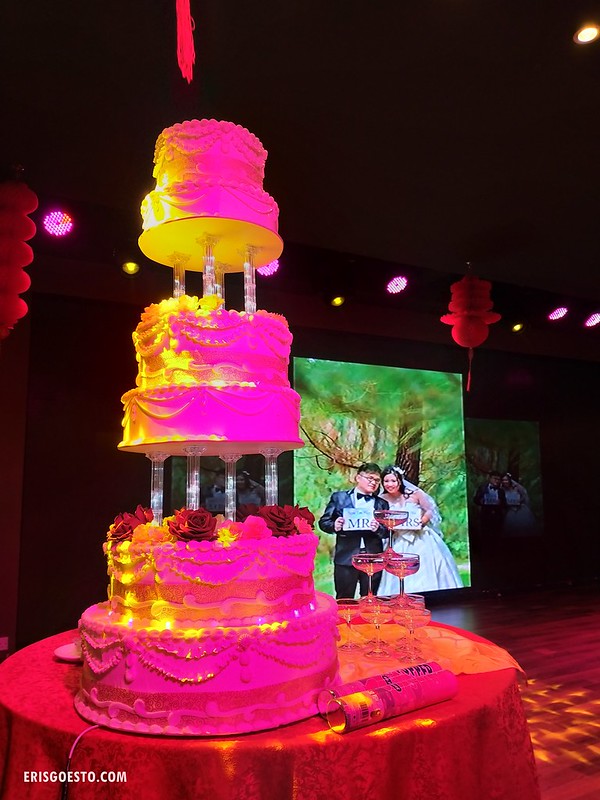 Halfway through the dinner, after the bride had a change of gowns, the couple was invited onto the stage for the cake-cutting ceremony and popping of champagne. Everyone then stood up for a toast (or three) – led by one rep from the groom’s side, one rep from the bride’s side, and finally the groom himself. You might have heard of the classic call ‘Yam Seng‘ – which is Cantonese for Cheers. 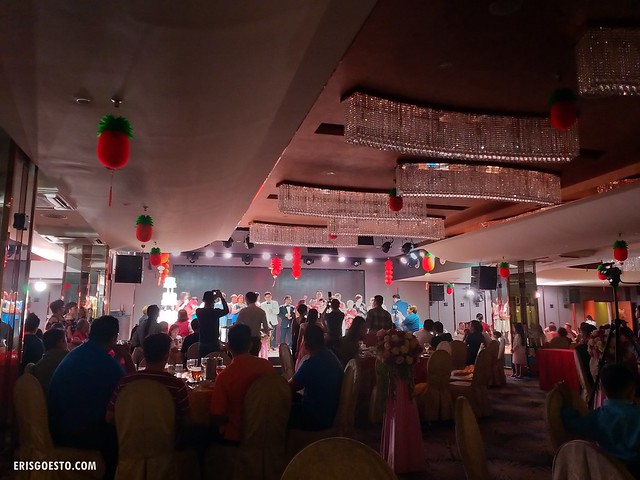 Three cheers for the newlyweds!

We didn’t stay for dessert as I had a 7AM flight to catch the next day – but even though it was a tiring day jam packed with activities, it was all in good fun.

One thought on “Being The Bridesmaid @ A Traditional Malaysian Chinese Wedding”