When it comes to travel these days, ‘hidden gems’ don’t stay hidden for very long. All it takes is one viral photo, and suddenly the hordes are descending upon the place like a swarm of camera-toting, Instagram-obsessed zombies.

Siniawan in the Malaysian state of Sarawak, however, has largely remained ‘off the beaten path’ – although its popularity has also been on the rise. Having never heard of the place prior to my trip, I did not know what to expect. By the end of it I was absolutely taken by its rustic charm, the warmth of its people and the town’s extraordinary story of resilience and perseverance. This is, truly, a gem that needs to be seen and experienced – so I recommend visiting before it gets too commercialised.

With that, here is a list of things to see and do in Siniawan. I hope you’ll find it useful! 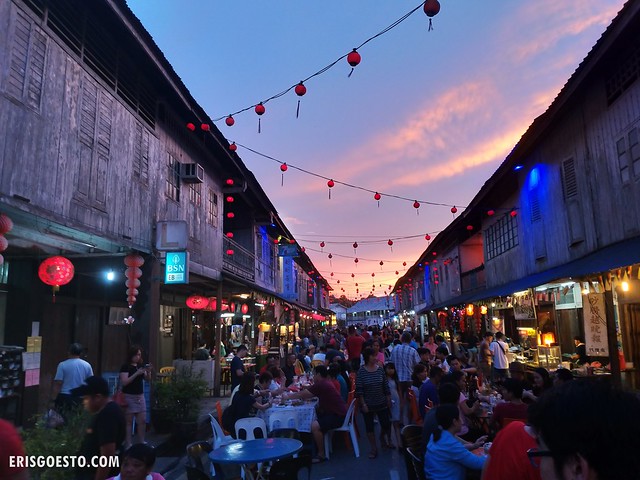 Tucked by the banks of the Sarawak River, Siniawan is about 30 minutes away from Kuching and was once a thriving trade town, thanks to the region’s gold mining activities.  At its peak in the 1870s – early 1900s, it even had opium dens, theatres, hotels and brothels.

After Sarawak became part of Malaysia, improved infrastructure meant shorter travelling times – but roads had been built bypassing Siniawan, and the town lay forgotten. Refusing to give up, the townsfolk (some of whom have lived here for over FIVE generations!) decided on a revival plan – a night market. Started in 2010, the pasar malam became a success, and is now a must-visit for many travellers to Kuching, who come to dine and bask in its unique old-world atmosphere. 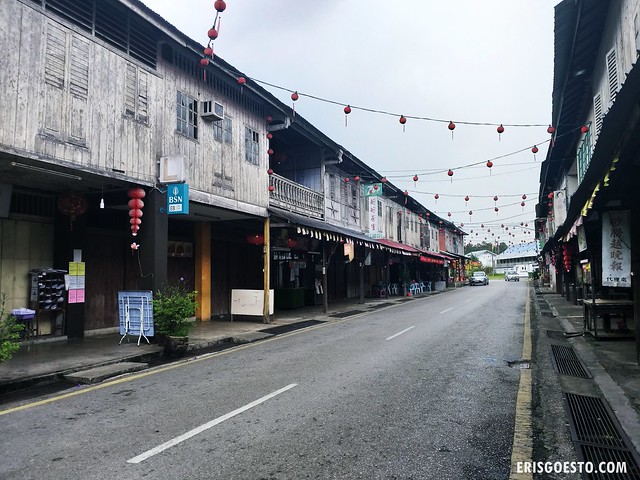 Siniawan during the day. The difference is, pardon the pun, like night and day. lol.

The main street is comprised of two rows of wooden shoplots. The buildings were constructed during the height of the town’s glory days in the 1910s. Unlike Sino-Portuguese buildings in West Malaysia, which typically sport colourful facades and elaborate decorations, the architecture here is Javanese, since it was easier to get carpenters from there via Singapore). The double-storey shops look rustic, with vertical wooden panels and unpainted fronts, earning the town it’s nickname “cowboy town”. (Doesn’t it look like the perfect place for a showdown at high noon? All it needs is a couple of tumbleweeds rolling in the wind).

1. HAVE A KOLO MEE BREAKFAST AT YONG TAI CAFE 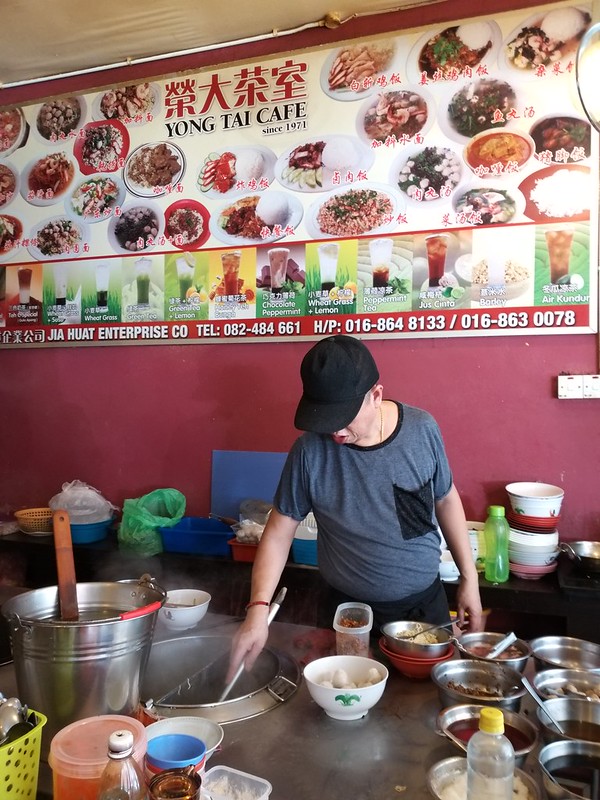 Start the day with breakfast at Yong Tai Cafe, one of the few kopitiams in town that are open during the day. The shop has been in operation since 1971, and specialises in a well-loved Sarawakian Chinese dish – kolo mee (literally dry noodles). With deft movements, the shop owner expertly cooks and tosses the bouncy egg noodles dry, before placing into a bowl and topping it off with fragrant fried onions in oil and lard, a serving of minced meat and charsiew (sweet barbecued pork). 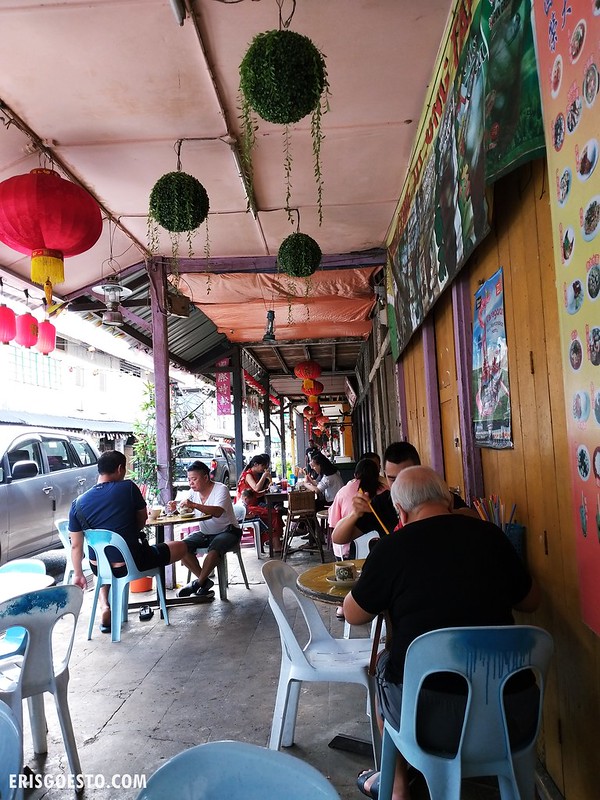 Dine ‘al fresco’ on the walkway. Most patrons are locals and have been eating here for generations. 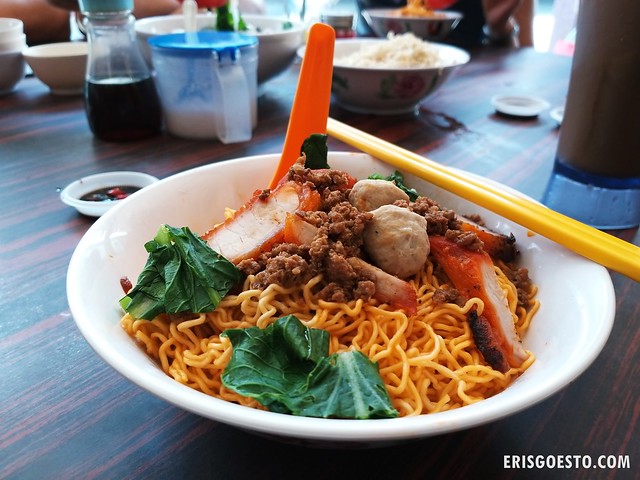 There are two types of kolo mee, the original (plain) and the one in red sauce which is actually a sweet charsiew sauce. Personally, I prefer the red as I found it more flavourful. The version at Yong Tai came topped with a few pork balls, veggies and charsiew slices. The noodles were bouncy and al dente, and everything just came together really well.

Can I just say that the PORTIONS HERE ARE HUMONGOUS ? And it only costs RM3 (USD 0.72!?) per bowl what in the actual eff. I know it’s a small town and everything but you can’t even get nasi lemak for RM3 in Kuala Lumpur these days (average bowl of noodle in KL = RM6.50 – RM10, depending on area). 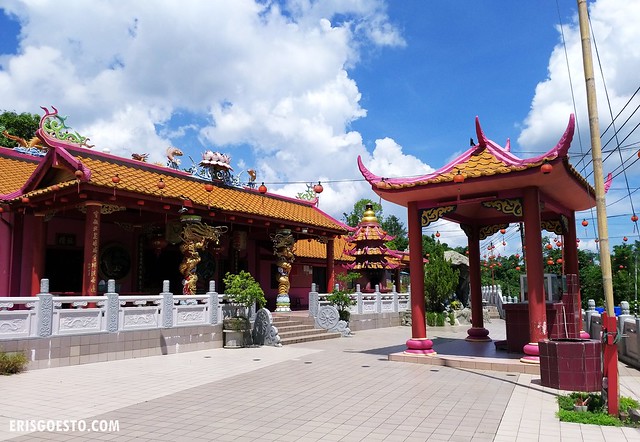 Walk a few hundred metres down the road and you’ll come to the town’s Chinese temple, Shui Yue Gong (Water Moon Temple) which is dedicated to the Goddess Guanyin. The temple is almost as old as the town itself, with a Qing dynasty sign hanging from one of the doors that dates back to 1886. While parts of the temple such as the compound are new and modern, the interior of the main shrine looks pretty old. The Guanyin statue on the altar was brought over from China over a century ago. 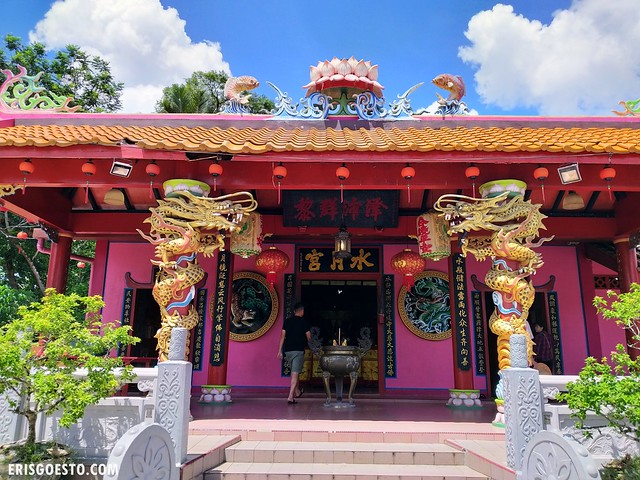 While small, the temple is well maintained. A fresh coat of pink paint hides the temple’s age, while the beautiful gold dragons coiled around the pillars look like they were carved just yesterday. 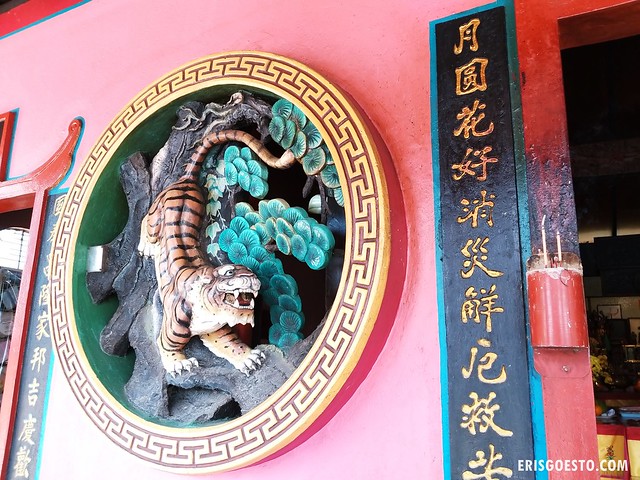 One of the town’s major festivals happens during Chap Goh Mei, the 15th day of the Lunar New Year, where a grand parade takes place. Departing from the temple to the town centre, the deity is taken on a procession accompanied by lion dances, music, firecrackers and performances. 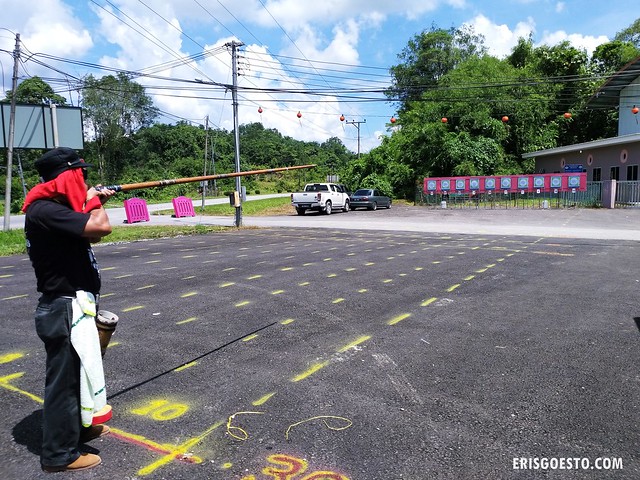 I was fortunate enough to be in town close to Gawai (Harvest Festival / Thanksgiving for the Dayak people of Sarawak), and there was a small activity going on nearby – a blowpipe contest! These weapons were used for hunting game in forests, such as squirrels, birds and wild boar, for hundreds of years. While less used today, communities in the area still practice the art, with blowpipe associations and blowpipe competitions.

The ones they used for the competition were extremely long – around 7 or 8 feet. I was amazed at how accurately they could hit the balloon targets which were about 30 metres away. Some of our group tried at the line where the asphalt ended (like what, 5 metres?) and still failed miserably lol. 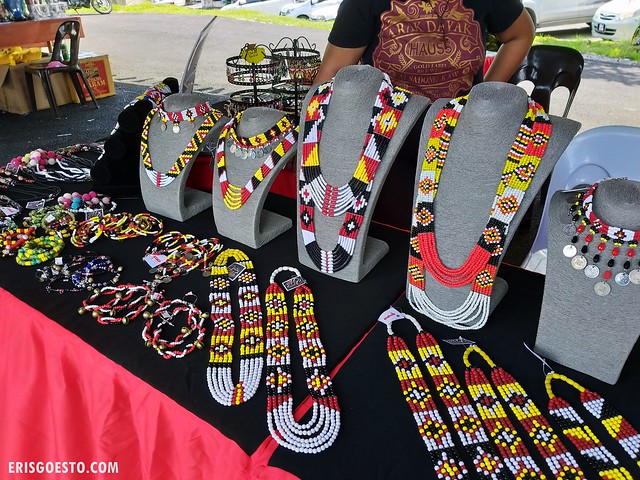 Traditional beads for sale. It was hard for me to tell them apart, but they were sorted according to colour and style – eg beads from the Bidayuh ethnic group would have a certain colour, while beads from the Iban typically featured red, black, yellow and white. 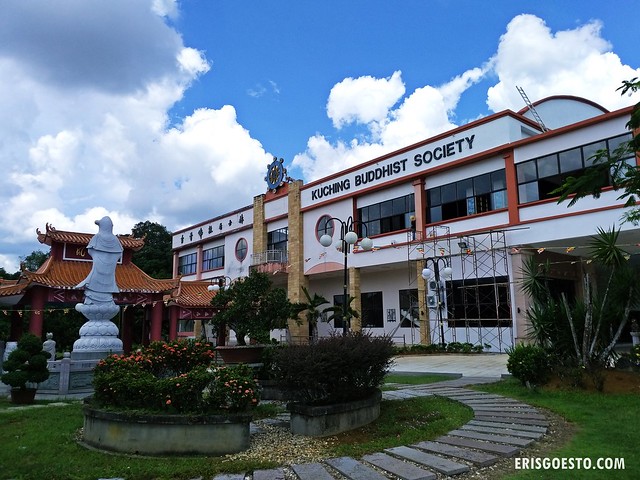 The Siniawan Buddhist Village surprised me, because I had not expected to find such a beautiful place so far away from the city. The place was abuzz several months ago when Hollywood star Steven Seagal (is he a star anymore though? lol) came to visit, but otherwise, visitors can take their time wandering the massive, tranquil grounds – home to a crematorium / columbarium, function halls, rooms where you can book a night’s stay (for meditation activities, talks, etc.) and a nine-storey pagoda, easily the tallest building for miles around. 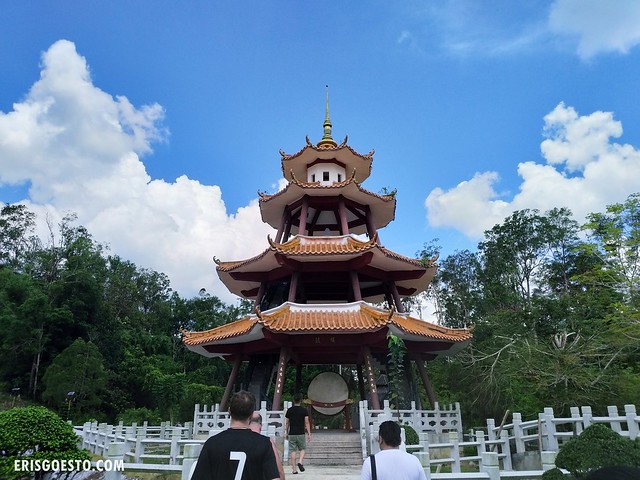 Surrounded by greenery, the grounds feature several Chinese-style gazebos and gardens peppered with stone statues of Buddhist deities; it even has a small pond stocked with fish. 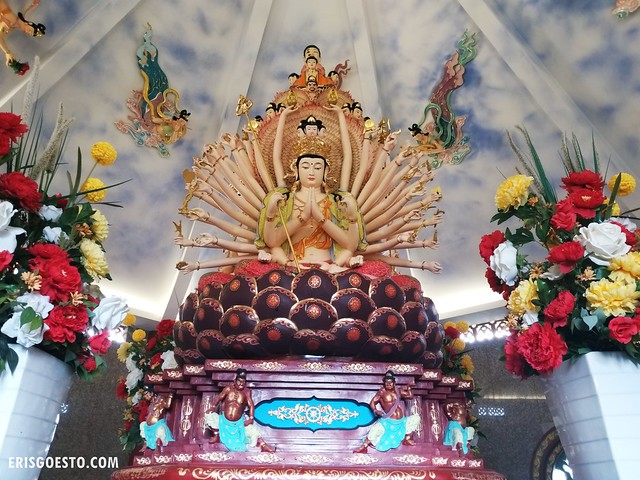 Thankfully, we did not have to climb nine storeys to the top of the pagoda, as it had a lift (whew!). At the top, there was a beautiful statue of a thousand-hand guanyin facing four directions, while the roof was painted to look like the sky. 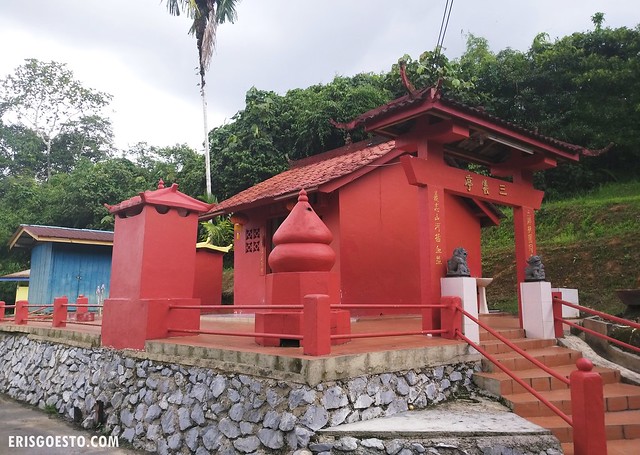 There’s not much to see at Liu Shan Bang’s shrine, but it’s worth a visit for the sheer history.

So who was Liu Shan Bang?

Liu Shan Bang was a gold miner from nearby Bau who founded the 12 kongsi (companies) that would operate the Bau gold mine, effectively making it a self-governing entity. Unhappy about taxation laws imposed by the ruling British ‘White Rajah’ James Brooke, Liu led 600 miners to attack Brooke’s mansion in the capital. Brooke escaped and his nephew Charles led an Iban force to quell the rebellion. Liu was killed. Many years later, a mining company came to the area looking to establish their operations, but the story goes that staff had horrible dreams about Liu’s restless spirit. Eventually they built a shrine over his grave, and the nightmares stopped. Today, Liu is worshipped as a local deity and has been recognised as a Sarawakian freedom fighter.

6. INDULGE IN STREET EATS AT THE SINIAWAN NIGHT MARKET 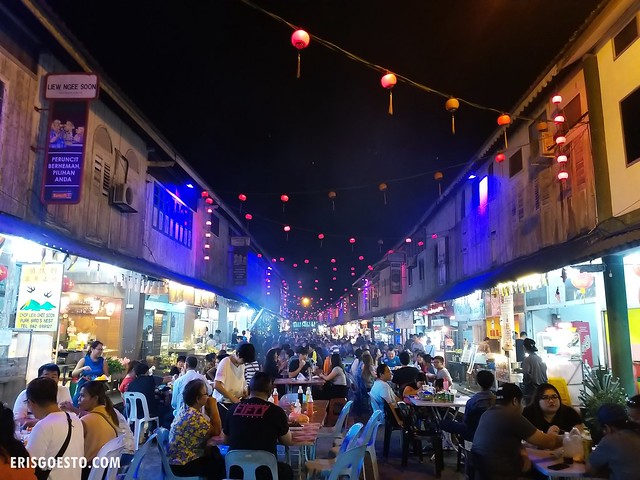 Head back to town as the sun sets to see it literally coming to life. Stalls are setup, shutters are opened, and traders bustle about preparing for the night. The decorative red lanterns hanging from one end of the street to the other are lit, providing a picturesque backdrop for photos. With the rustic buildings flanking both sides of the street, one might almost think that they’ve taken a step back in time, if not for the plastic tables and chairs. 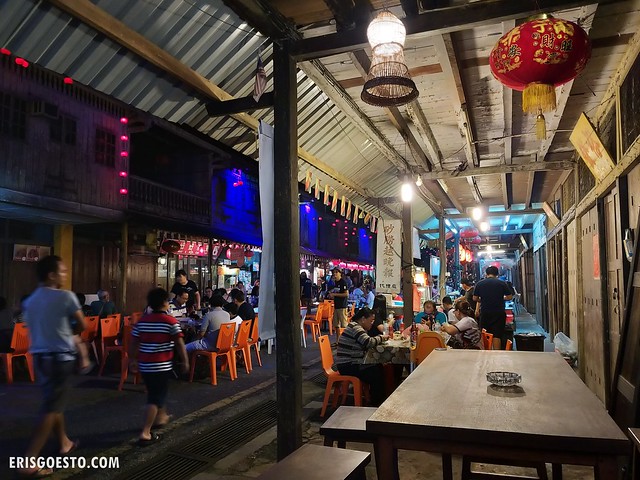 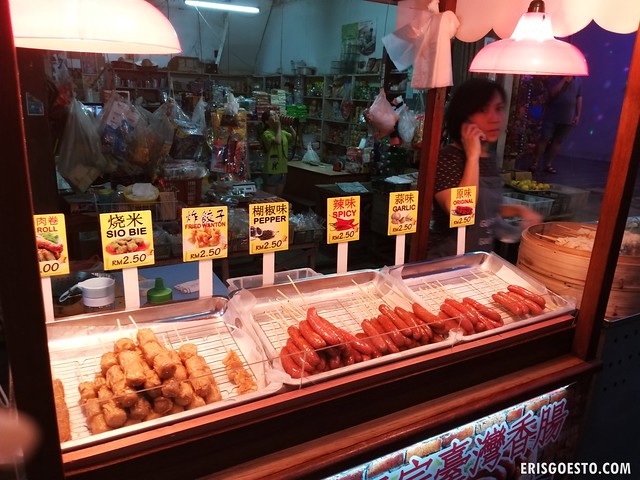 One of the must-tries here is the pitcher plant stuffed with glutinous rice – a Bidayuh specialty – but after walking up and down the street I couldn’t seem to locate it. 😦 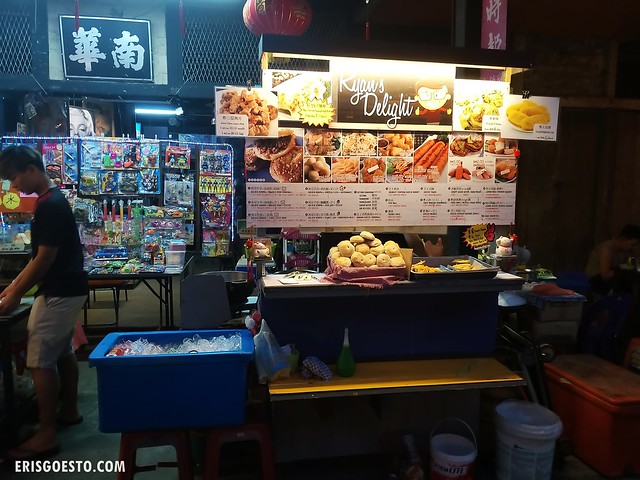 I did get to try the kompiah, a Fuzhou specialty which came highly recommended by the locals. It’s basically like a fluffy Chinese-style burger stuffed with tender pork and various fillings, overflowing with juices. You can easily polish off half a dozen in one go! 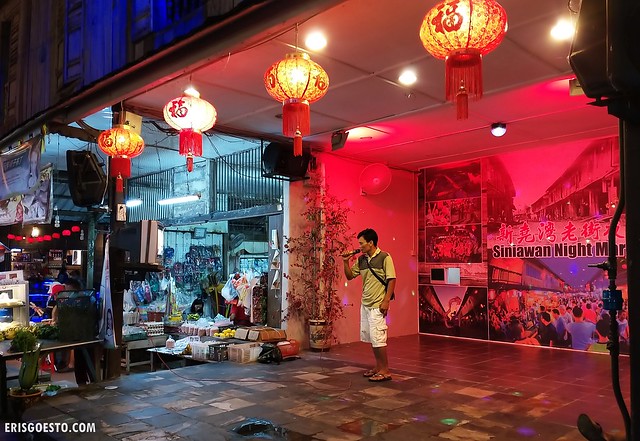 A ‘stage’ where you can choose a song to karaoke to for just RM1. Cue aunties and uncles belting out power ballads at the top of their voices out of tune. 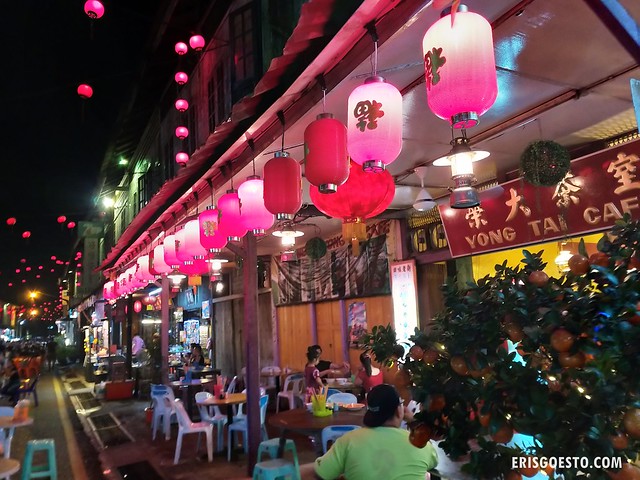 The Chinese vibe is pretty apparent in town, seeing as how 99% of the shops are owned and run by Hakka Chinese.

7. GRAB A DRINK AT THE BIKALAN 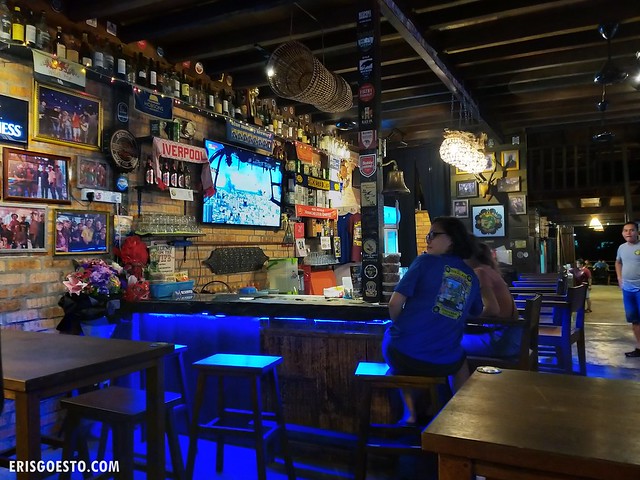 The only non-Chinese shop in town is The Bikalan, or ‘The Jetty’ in the Bidayuh language, which is run by a husband and wife team, Andy and Grace Newland (super nice people – I stayed at their place during my visit). Quaint and cosy, the bar-cum-bistro serves a good selection of traditional Bidayuh food, a few Hakka dishes, Western fare as well as alcoholic drinks. 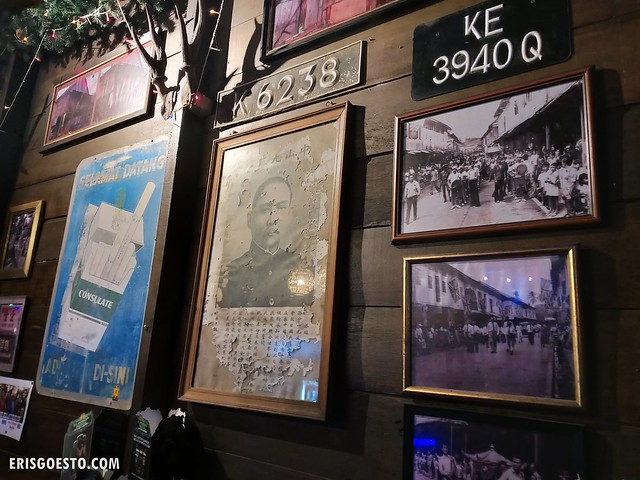 PS: RIDE A SAMPAN ACROSS THE RIVER 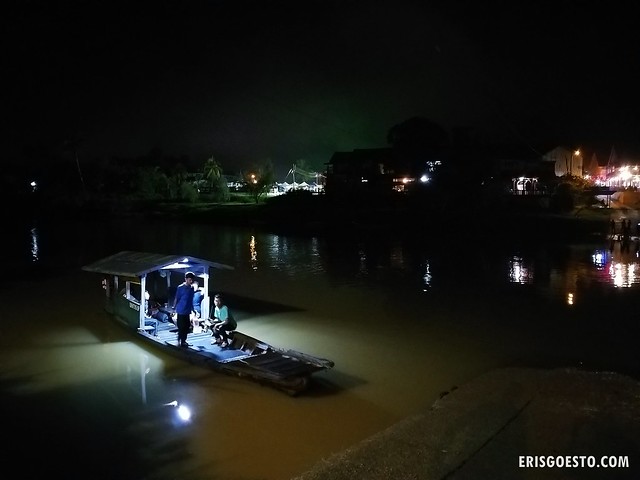 While Siniawan can be reached by car from Kuching, villagers from the surrounding areas who live across the river commute to town by sampan, a traditional boat. It was quite the experience for a city girl like me! The fare is just 0.50 cents per ride.

The best way to get to Siniawan from Kuching is by car, as public transport only services town during the day, with the last bus leaving Bau at 3.20PM. Grab is the only other choice if you intend to visit the night market, costing around RM30+ one way.

There is a homestay in town called Tian Xia Homestay, which is affordable but very basic. Rooms start from RM65.

One thought on “Siniawan Travel Guide: Attractions and Things To See & Do In The Cowboy Town Of Borneo”