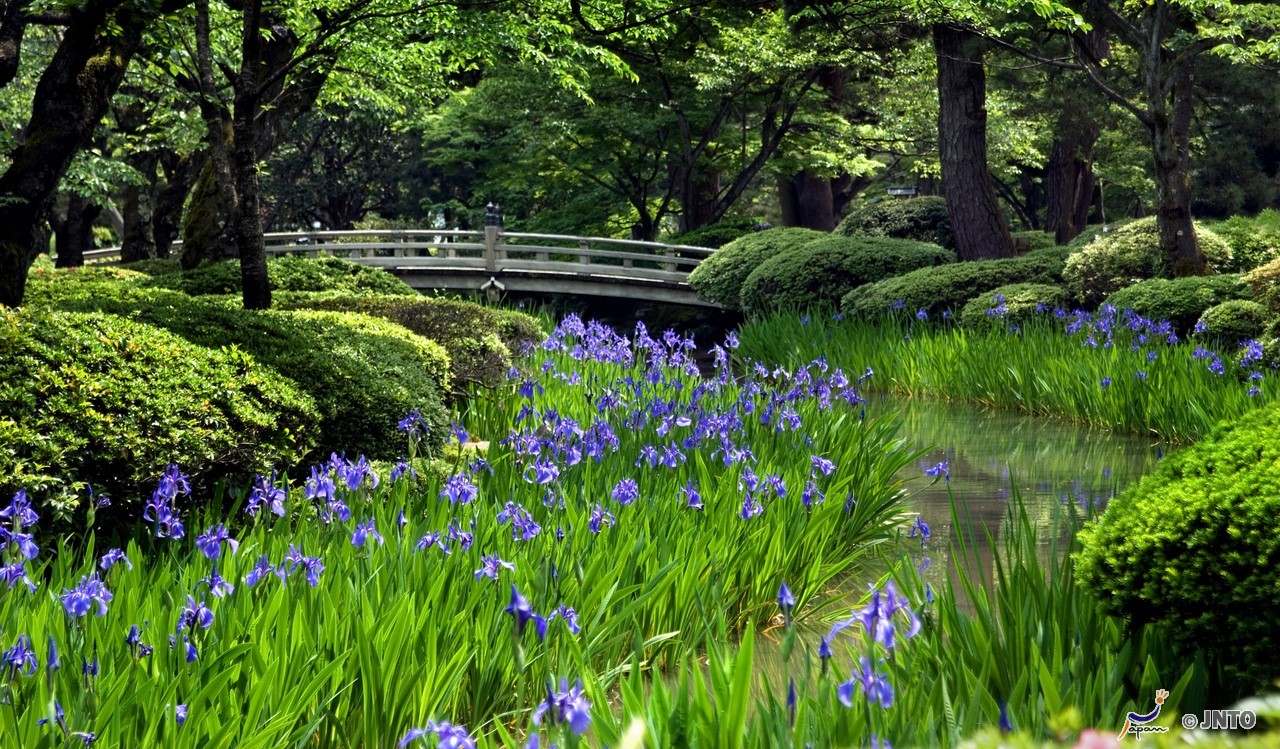 Kanazawa in Ishikawa Prefecture is relatively unknown among foreign tourists – perhaps due to it being off the beaten path of the Shinkansen (bullet train) – but the place is a popular destination for domestic travelers, and for good reason. If you’re looking for well-preserved examples of art, culture and history from Japan’s feudal era, Kanazawa has, perhaps, one of the best you’ll find in Japan.

Departing from Nagoya in the early morning, we arrive at the modern-looking JR Kanazawa Station an hour later. It was a rainy day – not surprising, since the city is known as the ‘Seattle of Japan’.

Part modern metropolis, part ancient capital, the city is an interesting blend of old and new, as seen from the giant wooden archway at the station’s entrance that stands in stark contrast to the place’s squeaky clean tiled floors, glass and steel railings and concrete facade. Known as a cultural and artistic hub, the city has a rich history that dates back hundreds of years, and was lucky enough to escape bombings during World War II. This makes Kanazawa the best place to see Edo-era buildings in their original form.

After dropping our items off at the hotel, our first stop for the day was Kanazawa Castle.

* Since it was raining I had to keep my DSLR in the bag most of the time. The photos I took with my phone weren’t too good so here are some from the Japan National Tourism Organisation. Photos watermarked are my own.

Kanazawa Castle was built in the 16th century as the homebase of Maeda Toshiie, a local daimyo (ruling warlord of a district). Japan’s feudal era was characterised by war and military insecurity, so it was natural for Toshiie to construct a castle town with which he could defend himself. As a result, nobles and samurais flocked to the place, as did the merchants, blacksmiths, carpenters, entertainers and geishas. Wars and several fires ravished the castle, resulting in its destruction in the 19th century, but the building has since been restored to some measure of its former glory.

A unique feature of the building’s architecture is its white-tiled roofs, said to be made from lead which could be melted down in times of war to make bullets.

We skipped a tour of the castle and proceeded to the adjoining park instead, which is almost as old as the original castle itself. Kenroku-en, or the ‘Garden of Six Attributes’, is widely considered as one of the most beautiful landscaped gardens in Japan, so called because it combines the six qualities that make up a perfect garden: spaciousness, seclusion, artificiality, antiquity, abundant water and broad views.

Spanning over 11.4 hectares, the garden is home to over 8,000 trees from 183 species of plants, with artificial ponds and streams found throughout the grounds. Look out for the unique two-legged lantern called a Kotojitoro (above, right) which has become a symbol of the gardens.

Since I was visiting in summer, the trees and plants were a bright, verdant green, bursting with colour and life. It is said that a visit to the Kenroku-en throughout the seasons offers a different experience each time: in spring, cherry blossoms abound, in autumn the leaves turn to vivid gold, red and yellow, while winter sees the trees tied down with long wooden contraptions to keep their shape and protect them from heavy snow. 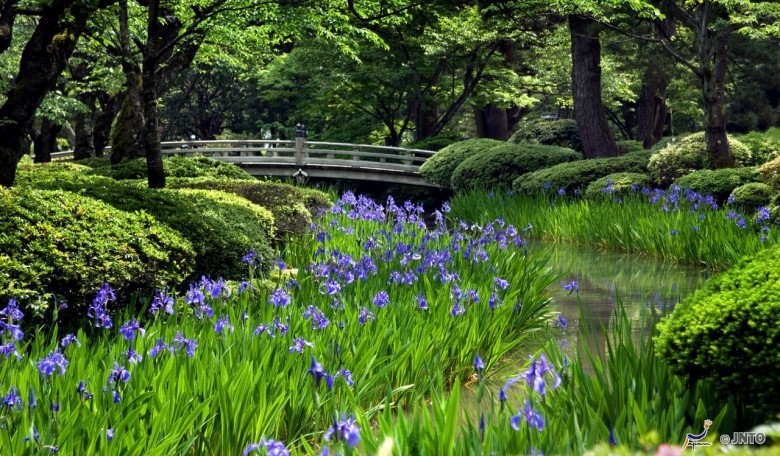 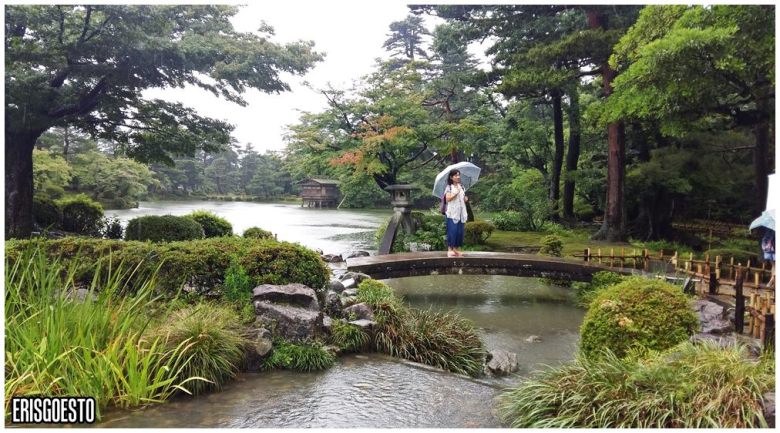 The gentle patter of rain subsided halfway through our park tour, although the sky remained grey and overcast – a pity, since the place would have otherwise made great photos. Still beautiful though. I can imagine the lords and ladies of old in their fancy kimonos strolling through the bridges and walkways before settling down to a nice warm tea whilst taking in the views.

Some not so nice photos from my phone.

We spotted the ‘oldest fountain in Japan’!  It’s not that impressive at only 3.5m high, but considering that people in the olden days did not have the technology we have today, this was quite a feat. The spurting water was achieved by applying natural water pressure.

One of my favourite spots, which had an ‘island’ in the centre of a pond. I thought it looked rather like a turtle in the water with trees sprouting from its back. 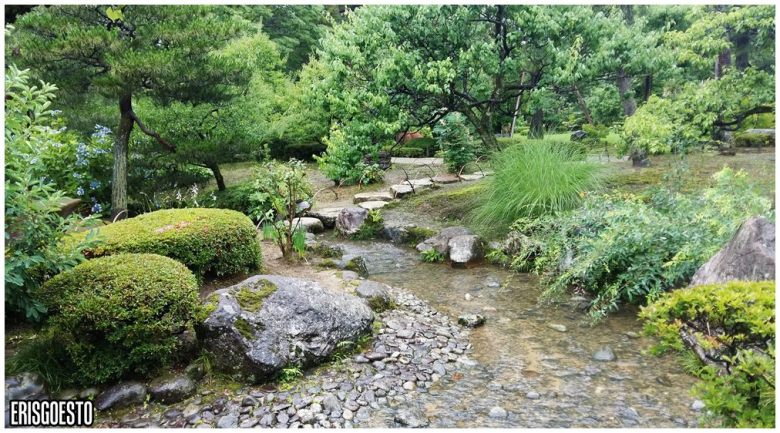 One can easily spend the whole morning walking through the place. Not sure on good days when its sunny, but we almost had the whole garden to ourselves! It was serene and quiet.

Lunch was at a restaurant called Miyoshian, replete with low dining tables, tatami mats and sliding partitions for privacy. Ordered soba noodles again (but hot this time) with chicken in a creamy sauce on top. It also came served with a boiled prawn, sweet egg roll (tamago) and condiments.

GETTING TO KENROKUEN/KANAZAWA CASTLE PARK

Board the tourist oriented Kanazawa Loop Bus and stop at numbers LL9 and RL8. The Kenrokuen Shuttle Bus stops at number S8. It costs approximately 200yen and takes 20 minutes. Alternatively, there are Hokutetsu buses that run between Kanazawa Station and Kenrokuen, which takes 15 minutes and 200 yen one way.