Many towns and cities in Japan grew around castles or temples during the feudal era. Nagano is one of the latter, flourishing around an ancient 7th century Buddhist temple called Zenkoji, also considered one of Japan’s three most sacred sites.

Legend has it that the first Buddha statue brought into Japan is enshrined within the temple, hidden even to its chief priest. The last known record of someone having seen the Hibitsu (secret Buddha) was said to be a monk in the 17th century, who did so on the emperor’s command.  While the original remains tightly guarded, a copy is shown to the public every six years (next display 2021) and draws millions of pilgrims to the city to witness the ceremony.

Lining the square in front of the temple are various shops selling souvenirs and food items.The pavement leading up to the temple is paved with 7,777 flagstones, which make for a picturesque photo.  Visitors will also find shukubo (temple lodgings), catering to devotees who wish to stay overnight and join the morning service, where the priests chant prayers and dole out blessings.

Before entering the temple grounds, we had to pass through a massive niomon (Guardian Gate), flanked by two large and fierce looking deities on each side.

There were a lot of woven slippers hanging from the gate with words written on them, but I’m not sure what these are for.

Entering the temple grounds, we were greeted by the sight of Buddhist statues lining one side of the compound…

..and the impressive-looking main shrine. Measuring over 40metres in height, it is one of the largest wooden buildings in Japan. The building itself dates back to the 18th century, as previous versions were destroyed in fires/earthquakes. As such, it is a good example of architecture from the Edo Era. 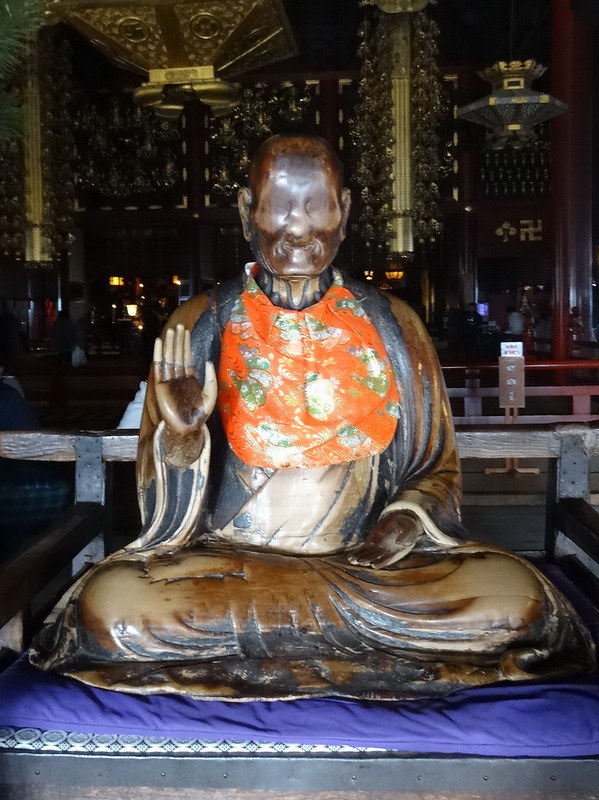 Was told I couldn’t take pictures in the main hall, so here’s one from Flickr.

Upon entering, we were greeted by a wooden statue of Binzuru, said to be one of Buddha’s most intelligent disciples.  Binzuru was one of the original four Arhats in Buddhism (before they expanded to the current 18) and is said to have psychic powers. The belief is that rubbing the statue corresponding to a sick part of your body will help cure it – hence the worn out features.

One of the most unforgettable experiences at Zenkoji was the walk through a pitch black corridor underneath the main altar. We descended via a narrow staircase into a musty passageway. It was so dark I tried waving my fingers two inches from my eyes and I couldn’t see them! The only way to make it through is to move slowly while touching the smooth wooden walls. Our guide told us to keep our hands at hip height and try to locate a key hanging from the wall, which touches the ‘Hibitsu’ – so touching it meant it’s as good as touching the secret Buddha statue itself and will earn you major merit points. It felt like a long walk because we had to take each step with caution and there was no indication as to when the corridor was going to end – but when we finally emerged into light again I felt a wave of relief. The walk in darkness is also supposed to symbolise your ‘rebirth’, in line with Buddhist belief.

Back outside, side view of building.

Cows are a symbol of the temple, so you’ll find many bovine souvenirs on sale!

From JR Nagano Station, take a 10-minute bus (100 yen), or take a train from Nagaden Nagano Station (next to JR) and alight at Zenkojishita Station for a further 5-10 minutes walk to reach the temple.