I’ve always found novels that revolve around Chinese culture fascinating – especially if the stories are set in the olden days. Maybe I’m compensating for my lack of connection to my Chinese roots. Growing up fourth generation Malaysian Chinese, it was always hard to fit in : my Chinese peers shunned me because I attended Malay school and never picked up Mandarin (what most of the Chinese here use), English was my first language and Cantonese was what I spoke at home. In recent years, I’ve been peppering my parents with questions (grandparents are gone so I can’t ask them directly) – how did my great grandparents come to Malaya? Did they have siblings in China? What did they leave behind? Some my parents could answer, but most of the stories are lost because things were different back in the day. Their mothers and fathers did not sit down and talk to their children like how we do today; they were too busy making ends meet.

Lisa See’s Shanghai Girls offered me a tiny glimpse into life in that era. The novel tells the story of two sisters living through the 2nd Sino-Japanese War, before they fled to perceived safety in America. 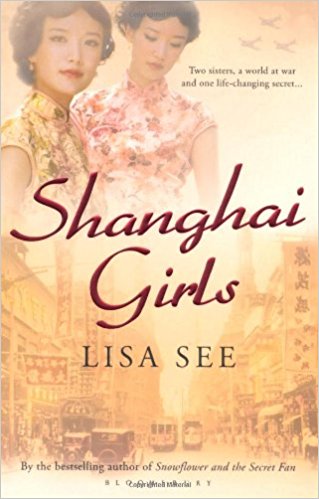 Pearl and May are what they call ‘beautiful girls’ – socialites from a middle class family who wile their days away posing for artists in vibrant, cosmopolitan Shanghai and mingling with foreign friends. Growing up sheltered and pampered by their parents, they are blissfully ignorant about the situation unfolding around them: the Japanese are advancing into their home city. When their father declares himself bankrupt due to gambling, the sisters are shocked and angry as he has promised them to a ‘Gold Mountain Man’ – An American Chinese, who has returned to China to seek brides for his sons, in order to repay his debt. They meet the sons, Sam and Vern, the latter who seems to have a mental disability. The couples have a simple wedding ceremony, but after the men have left for America, Pearl and May refuse to board the boat, thinking that the family would be too far away to do anything. Little did they know that this missed boat would be their last safe passage out of China.

Just days later, the Japanese attack Shanghai. Their father disappears; the girls and their bound-foot mother flee to the countryside. Ambushed by Japanese soldiers, Pearl and her mother are raped. Pearl survives thanks to May, who was in hiding when the atrocity was taking place, and they end up in Hong Kong. With only a little money and possessions, they try to exchange their tickets for passage to America to look for their husbands. Once there though, the sisters realise that America was not the ‘land of the promised’ that they had been led to believe…

Shanghai Girls may be a fictional story, but it is set within a historical context which sees the characters going through various key events in history, including the 2nd Sino-Japanese War, Hollywood’s Golden Era, the Chinese Exclusion Act and the rise of Red China. Real life characters, such as actress Anna May Wong, Madame Chiang Kai Shek, ‘Mother of Olvera Street’ Christine Sterling are also woven into the fabric of the tale, making the events seem real and timely.

Mostly though, it explores the relationship and dynamics between its two principal characters, Pearl and May, who happen to be sisters as well as best friends. As we follow the characters’ journey – their downfall into poverty, being forced into an arranged marriage with men they do not love, fleeing their beloved city and to finally arrive in America – I couldn’t help but feel sorry for the hardship that the characters have had to endure, knowing that these were the stories of millions of immigrant Chinese who escaped China during the war.

Life is never a bed of roses, and See tells it the way it is. Once the girls have arrived, thinking they’ve found freedom and sanctuary, they realise that their new family has other plans for them, hemming them into Chinatown’s old ways and rules. The Chinese face discrimination, as suspicious government officials terrorise the community hoping to catch illegals. Despite feeling unwanted and bullied by the locals, Pearl and May struggle to adopt what they believe is an American way of life.

Not all is doom and gloom however. There are uplifting moments, and because they are few and far between, it feels all the more precious.

See is superbly talented at fleshing out descriptions, so much so that the reader can almost envision walking through the streets of Old Shanghai or the gaudy alleyways of Los Angeles’ Chinatown. I also like how she peppers the story with cultural references or beliefs. For example, horoscopes play a big part in Pearl’s beliefs – she, a Dragon, is a tamer of fate, while May the sheep has characteristics that Pearl believes makes her do the things she does.

The novel is a poignant and well-researched piece centred around the indomitable human spirit to survive against all odds and relationships, set amidst a colourful and descriptive backdrop of East meets West. As a Chinese-American writer, See also captures the collective essence of what it is like for many immigrant Chinese families all over the world – the hardship, the bitterness, the longing for home, the fleeting moments of joy and the things they have left behind in search of a better life.