If you’ve ever watched The Beach (starring a still baby-faced Leonardo Di Caprio), you’ll remember the breathtaking shots of pristine blue waters and soft white sand surrounded by limestone green hills. They were shot at the (now rather commercialised) Phi Phi Islands, off the coast of Phuket and Krabi. Having come all the way here, there was no way we were going to miss island hopping and seeing  the beautiful beaches for ourselves!

H & I had arranged for our hotel to book an island tour for us on Sunday morning. It cost us 1400B (RM167 / USD39).  The shuttle bus arrived to pick us up at 8am sharp. It was a 40 minute ride to the coast, where three other tour groups were waiting to be taken to the islands via speed boat. We had to wear different coloured strings so we knew which guide to follow. 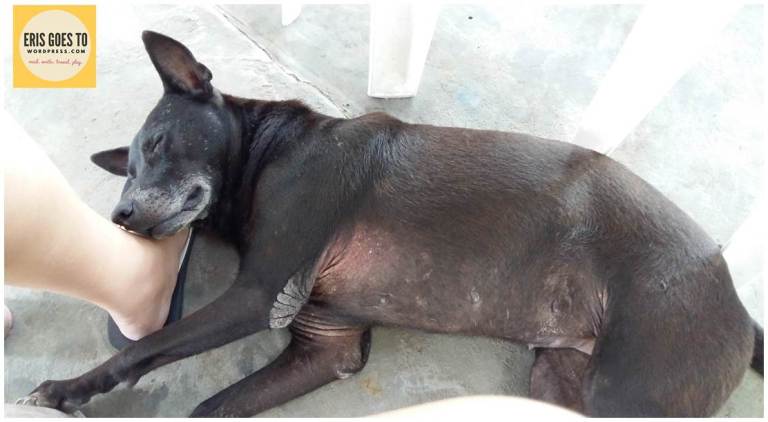 While waiting for other guests to arrive, we sat in the shade on plastic chairs. This super friendly doggy came up to us and demanded to be petted. She was so cute! Whenever we stopped petting her, she’d put up a paw and pat us, like ‘Why did you stop?’ She eventually dozed off to sleep and H couldn’t move her foot.

There was a safety briefing, and the tour guides will try to sell you stuff like waterproof phone cases and flippers, which they said were to protect your feet from sea urchins. They cost 100B to rent. I would not recommend getting them coz it was a waste of money – I ended up not using them at all because they were bulky and difficult to swim around in. The water is so deep when you go snorkelling that you wouldn’t be able to touch the bottom anyway. 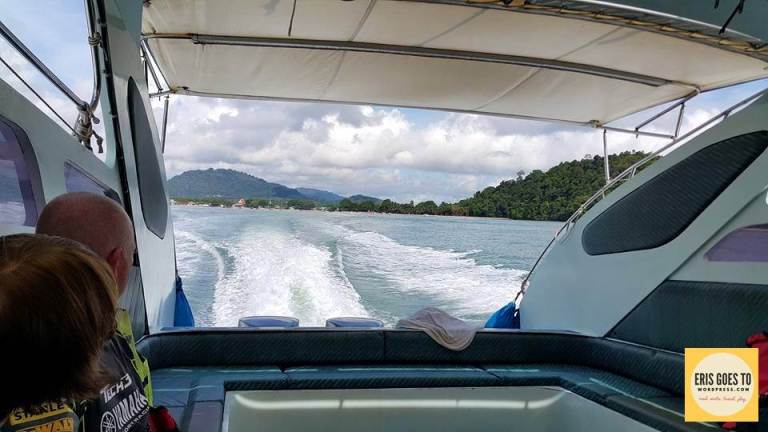 And off we went! The speed boat sliced noisily across the water. The weather, unlike the day before where it rained all day, was sunny and bright – perfect for island hopping. We were in the boat with about 15 other tourists, mostly white men. H & I were the only two Asian girls and it was a little awkward being surrounded by beefy dudes with tatts. They gave us water and cola to drink, because the ride was one hour long.

Our guide called himself Johnny, ‘like the pirate!’ he chuckled. He was very helpful throughout the trip and liked to make jokes.

I couldn’t believe how rich the colours were. Not that we don’t have islands in Malaysia, but everything here was just so… vivid. The sky was a clear light blue, which contrasted with the sea’s deep sapphire. Sandwiched in the middle were fluffy white clouds. 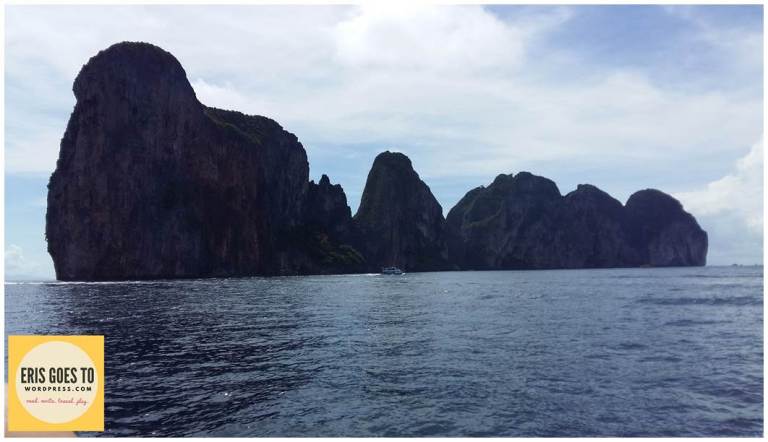 If this scene looks familiar, that’s because this is the place where Leo and gang shot The Beach. The dark and imposing mountains with steep cliffs loomed over the sea like slumbering giants, casting shadows on the boats. In the movie, it was digitally altered to include more mountains, and the beaches were ‘flattened’ to make it more paradise-like… that beats me. It already looked like paradise to me. 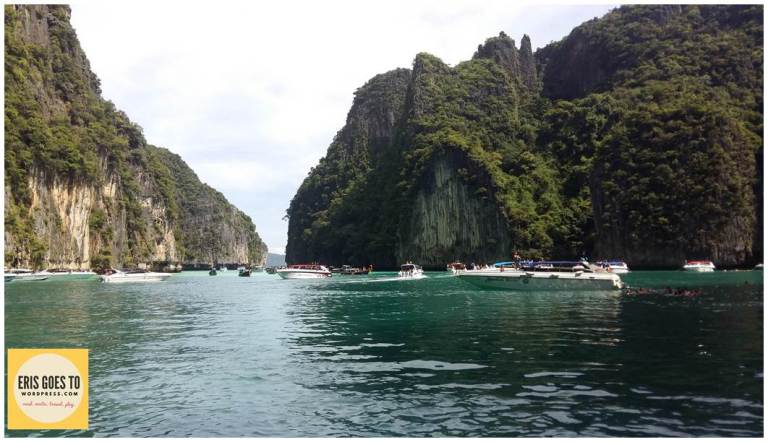 Koh Phi Phi Ley island is the second largest among the cluster that make up Phi Phi Islands. Our boat entered through a narrow opening into a lagoon, surrounded on all sides by cliffs. There were many other boats filled with tourists, some of whom were already splashing about in the water.

The water. I’ve never seen sea water like that in my life. The colour was blue and crystal and clear and turqoise and teal, all at the same time.

You know that feeling you get when you’re in the face of nature’s beauty and it just hits you, how small humans are against the power of nature? I got that, standing in a boat, looking into the sparkling crystal waters of the Andaman Sea. 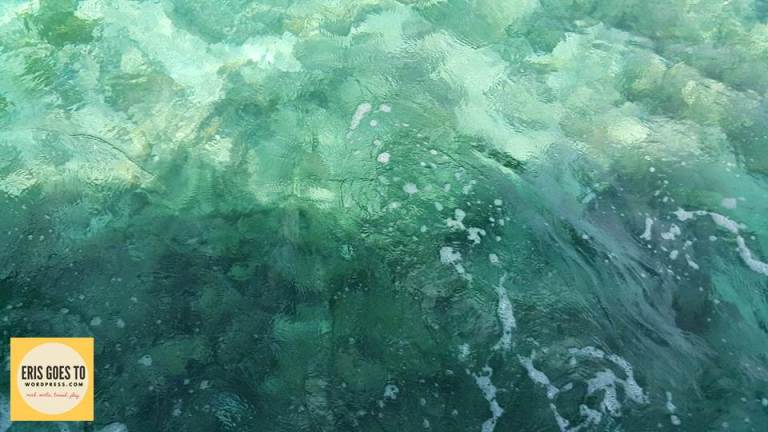 Parts of the lagoon looked shallow, but our guide warned that it could be up to 30ft (!) deep.

We anchored. Time to go into the water! I felt a little ashamed because everyone on my boat knew how to swim. I put on a life vest and just bobbed about in the water. Accidentally swallowed a mouthful and it was so salty! Even saltier than normal sea water. 😡

It was super relaxing, despite the number of tourists. Most of them kept to the area around their own speedboats, and although it was sunny, it was cool under the shade of the cliffs. 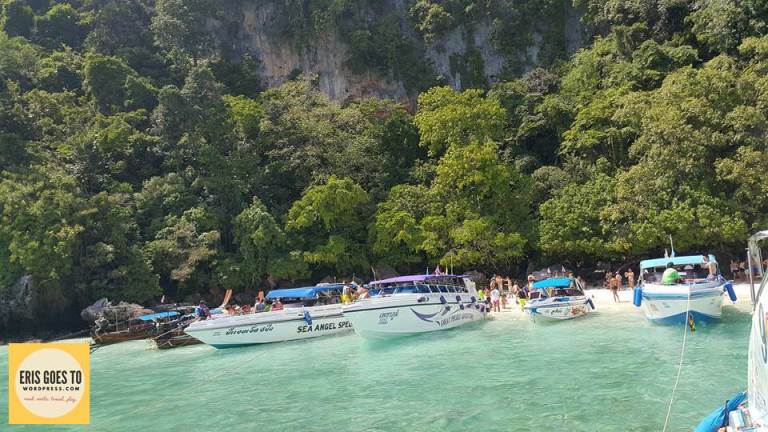 Half an hour later, we were on the boat again heading towards Monkey Beach. The beach and its surrounding area is inhabited by dozens of macaques. Your guide will be selling peanuts so that you can feed the animals, but be careful because the macaques can be quite aggressive. 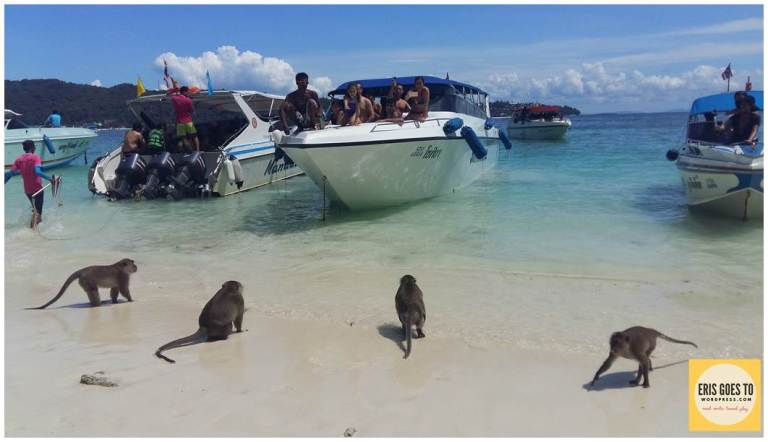 I found this scene funny.  Tourists on the boats, looking at monkeys looking at tourists. 😀

The monkeys were not afraid of people at all. I guess they see them all day, everyday, so they’re used to it.

The water here was also a clear blue, while the sand was like fine, talcum powder. 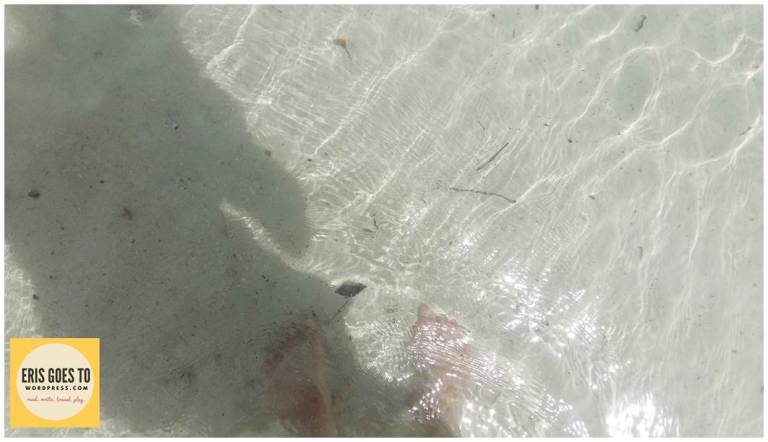 I have too many pictures of our island hopping trip, so I’ll be putting up Part 2 soon.