Ever since I started working, I haven’t had much time to touch my pens – either because I was too tired or too lazy after a long day running around looking for stories. I picked them up again recently and realised how much I’ve missed drawing just for the fun of it.

Here’s my latest work! *PS: I am by no means a professional artist, nor have I gone for any training/classes.. so don’t be too harsh on it mmk? 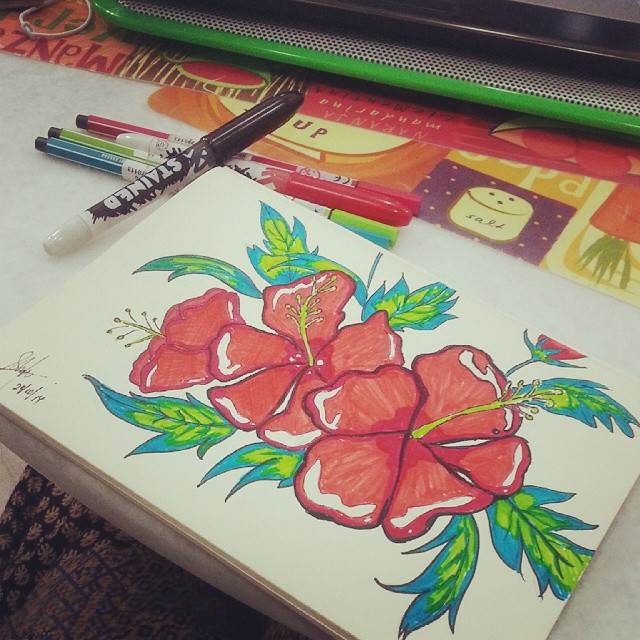 Bunga raya (hibiscus flower), the Malaysian national flower. It comes in various shades, but the most common ones I see are  in red. I like it coz the petals are soft and wide, with a long stalk in the middle. When the wind blows, they look just like pretty skirts dancing in the breeze. I showed E and he said it’s called gumamela in the Philippines, where children use the sticky sap to dip into papaya stalks as straws to blow bubbles.

It’s great to pick up a pencil and draw again. Since I was a kid, drawing has always been my first love, but I never got to pursue it professionally because my parents, like most Asian families, didn’t think much of it as a career. In high school, my brother and I were avid manga lovers and we loved drawing comics and manga. I even sold them to my friends, which went towards pocket money funds. But my mum, probably super frustrated that the two of us were gonna end up ‘failures’ because we seemed more interested in sketching than studying, flew into such a rage one time that she tore up some of our sketches. We didn’t sketch so openly at home after that.

In college, I took up journalism. It wasn’t my first choice, but since I liked writing, it was better than being forced to study accountancy (which was my family’s choice). Some Asian parents seem to have this notion that accountancy, law, medicine or engineering are the only careers out there that will guarantee you won’t starve to death. Common advice – “You want happy? Happy won’t put food on table, happy won’t pay your bills.”

I often wonder where I’d be now if I had taken up my original love for illustration as a career path. One of my high school friends did and while I don’t think she’s very well-off in terms of material wealth, I think she’s happy. Her story is probably one of the reasons why my parents don’t like art. But at the same time, I wish they had believed in me enough to let me try. Who knows?