It’s not easy to turn your passion into a business, whilst also spreading a positive message in the process. Meet the folks from homegrown creative Loka Made, as they highlight the beauty of Malaysia and its people, one inspiring artwork at a time.

When Chong Fei Giap and Audrey Chew first thought of  publishing an artbook back in 2015, they never intended to create a brand. At the time, they ran a studio called Running Snail, which did mostly corporate illustration projects for blue chip companies like Petronas, specializing in artwork with local elements.

Fei Giap had been working on a series of illustrations on the side since 2011, which were inspired by a visit to his father’s hometown in Kuala Pilah, a small town in Negeri Sembilan. The unique artwork combined a Japanese anime art style with scenes of rustic Malaysian landscapes, local architecture and fantasy elements – and it quickly caught the eye of local art enthusiasts and corporate brands. With the support of fans, the pair decided to expand on their passion project by publishing an artbook. 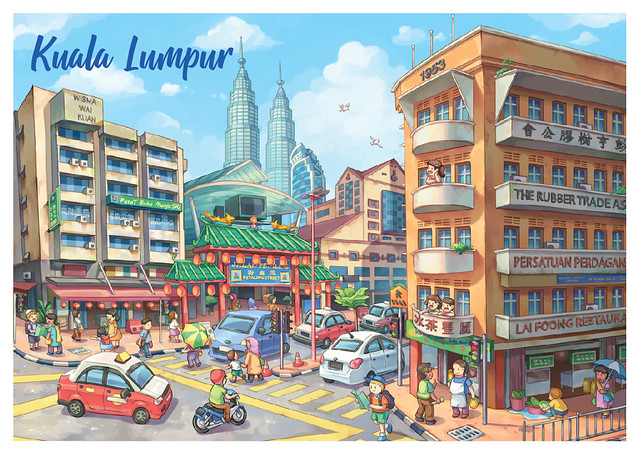 “Our initial idea was just to publish the artbook. We were young and crazy; we poured all our savings into it!” Audrey says, adding that they spent about RM40,000 on the project. Since they already had a lot of material and concepts in hand, it felt like a waste not to expand on them, so the duo decided to go the whole hog and create a few more products to sell. Their first merchandise was a series of quirky Malaysian-themed pop-up post cards.

To launch the book and their new items, Audrey and Fei Giap had the support of Kinokuniya Bookstore. The retail giant was not only willing to put the artbook on their shelves, but also provided them with window display space and a place for them to do the book launch. The rest, as they say, is history.

Today, Loka Made makes art books, pop-up postcards, notebooks, puzzles and other souvenirs inspired by everyday Malaysian life and culture. The designs are often whimsical and nostalgic, and feature everything from scenes of small-town sundry shops and heritage buildings, to iconic Malaysian landmarks and traditional dishes, sometimes interspersed with fantasy elements.

In the brand’s early days, Audrey played a more hands-on role in helping with the illustrations, but has since moved on to a more managerial role. She oversees a team of four artists and one designer, and handles the sales and marketing side of things while Fei Giap spearheads the brand’s creative direction. Although Loka Made has a retail arm, a significant portion of their business involves creating artwork for corporate clients.

Of course, Rome wasn’t built in a day – and despite its current success, Loka Made was no different. Audrey shares that in the early days, it was very challenging, not only because they were a small indie studio, but also because there were no other companies that had a similar concept of making Malaysian-themed artwork and products for sale. Coming from art backgrounds, the pair had to adapt and learn things quickly on the job. For example, Audrey shares that they actually went door-to-door in order to introduce their products.

“We’d go to tourist spots in Penang and Melaka, and pass out samples of our work to shops. Although there was some interest, not many businesses called us back,” Audrey recalls. (This was before the boom of the domestic travel in recent years, which has seen a heightened appreciation for local products and art.) She adds that this was partly the reason why they started Loka Made – to promote what the country has to offer, whether it’s amazing culture, food or scenery.

The pair’s persistence seems to have paid off. Today, you can find LokaMade products in many local independent bookstores and art stores such as Stickeriffic and Salt X Paper, as well as bigger chains like Kinokuniya and Popular. Aside from their studio-cum-physical store in USJ9 Subang, they also have a shop in Central Market Kuala Lumpur. Items are also available online at lokamade.com.

The products are affordably priced, with postcards going for as low as RM2 per piece, while the pop-up pieces range between RM10 to RM20. “If we’re going to educate the public as part of our vision, it has to be accessible to everyone.” Audrey says.

Just a look at any one of their pieces and it’s easy to see why their designs have captured the hearts of many. They are all painstakingly detailed; and while the fantasy elements are the products of creativity and imagination, a lot of research is also poured into creating each artwork. “We have a catalogue of photos that is this thick,” Audrey spaces her hands apart to illustrate. “They’re sorted according to different themes, time periods.. so for example, if our artist needs to draw a scene from 1960s Malaysia, they’ll have to refer to that catalogue. It helps us to accurately portray the local architecture and subjects in our artwork,” she explains. The team also works with local historians and professors by conducting interviews, like with an upcoming project involving the different Malaysian Chinese clans.

To keep things fresh, Loka Made has their own in-house projects each year. Fans who have been following their releases might be familiar with the Tapir Man – a cute character based on the Malaysian tapir, which was conceptualised during Malaysia’s Movement Control Order back in March. There’s also the “Ride MY Wave” series which includes T-shirts, bags, notebooks and customisable Touch N Go cards. The illustration features fantasy elements. The Malayan tiger, our national animal, captains the ‘ship’ that everyone is sailing on and there are people of all races on the boat. You will also spot iconic landmarks such as the Stadthuys in Melaka, and Malaysian wildlife like the orangutan and hornbill. The theme was created in response to the current pandemic, serving as a reminder to fellow Malaysians to stay strong.

“2020 has been full of ups and downs, and we’re hoping to weather this storm together. In the artwork, you will see lots of details which we think people will enjoy looking out for,” Audrey points out.

Audrey is hopeful for the future, despite the uncertain economic outlook right now. “We had a lot of plans before the pandemic, but we’re still grateful for how the business is doing. But on the bright side, more people are travelling locally – which is what we’ve been promoting as a brand all along. Malaysia has so much to offer. It would be great if more people can see this,” she says.

Support your local business and order online from Loka Made at https://www.lokamade.com/

Note: I did this story for the November issue of Fireflyz, the inflight magazine for Firefly Airlines. This article features a few tweaks and some additional info I wasn’t able to fit in to the story.

Note 2: A big thank you to Audrey for her time and patience in answering all my questions. I truly enjoyed doing the interview 🙂

5 thoughts on “Loka Made: A Homegrown Creative Promoting Malaysia Through Art”