For non-Muslim Malaysian couples who wish to get married, there are a few places where you can get your marriage solemnized and registered; namely the National Registration Department, or a church, temple or association where they have an assistant registrar of marriages. In KL, Thean Hou Temple is a popular place for Chinese couples, as it is a beautiful venue that offers plenty of photo opportunities. 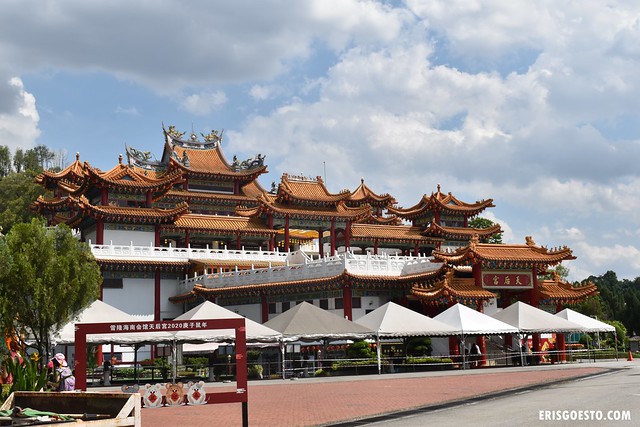 My good friend Helen and her husband Hong initially planned to have their ROM here on May 20 (5/20 sounds like ‘wo ai ni’ / I love you – so it’s a very popular date! ) but due to the pandemic, it had to be postponed to July. Although the temple has reopened to the public, there are new SOPs in place – so be mindful of these when visiting for leisure, or if you’re attending someone’s ROM.

Note: This is a post on my experience attending an ROM as a guest, so I will not be including info on what documents you need / the procedure. Some useful links here and here. 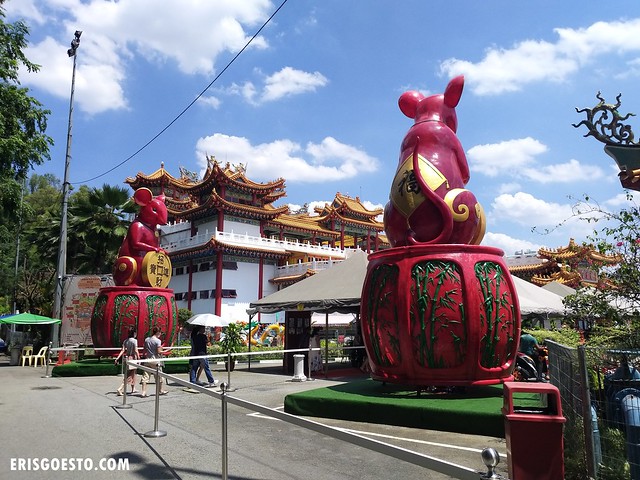 Considered one of the most beautiful Chinese temples in KL, Thean Hou is eponymously named after its principal deity, the Heavenly Mother, aka Lady Mazu. Like many Chinese temples in Malaysia, the temple offers a blend of Buddhism, Taoism and cultural elements. Located atop a hill surrounded by lush greenery, the temple also has awesome views of the city and its surroundings, making it a popular tourist attraction.

To ensure health and safety, a canopy has been set up leading into the main building, with a clearly demarcated route – so you enter from one side and exit on another. 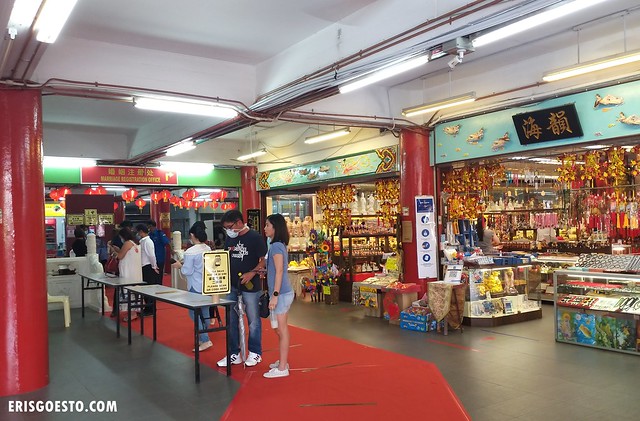 The marriage registration office is located at the basement, where the temple’s food court and souvenir shops are. Before entering the premises, visitors will have to scan their details via QR code, and have their temperatures checked. Visitors are also required to wear face masks. 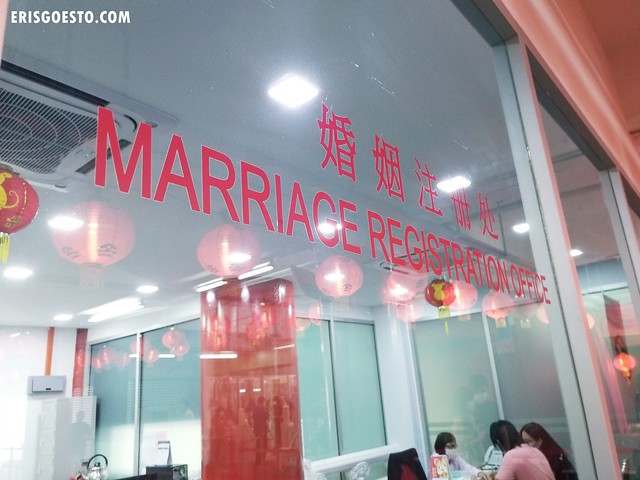 The marriage registration office is divided into two sections. The front is a reception area of sorts – the couple gets a number, waits for it to be called, and then goes in to verify their details. Once that’s done, they can then proceed to rooms at the back where the actual solemnisation and signing takes place. 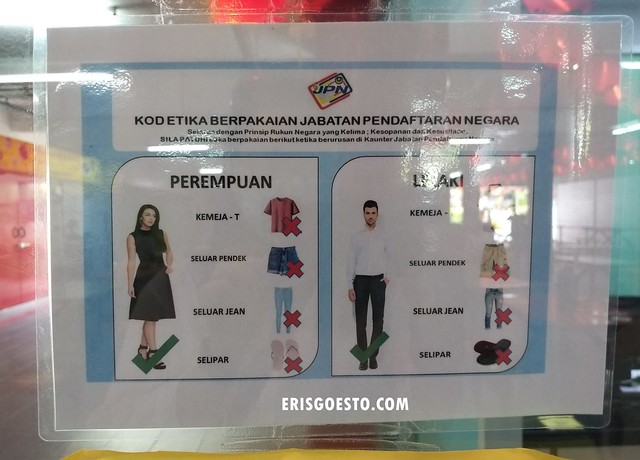 Since ROMs are formal events, avoid wearing casual clothing like jeans, shorts or T-shirts and slippers. 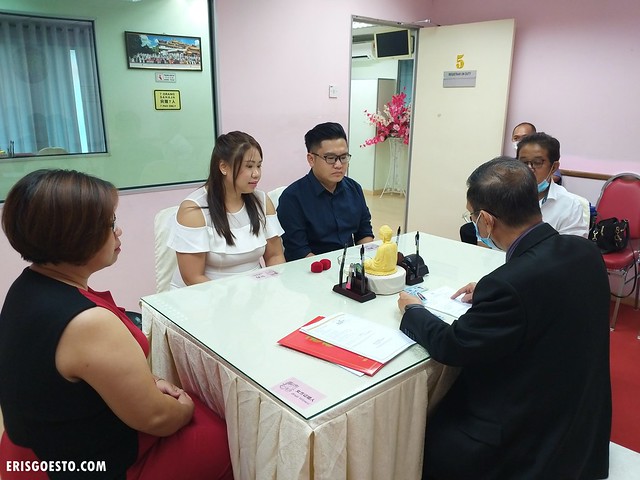 In light of the pandemic, only seven people are allowed into the room at any given time (including the couple). Helen had her sis/bro-in-law as witnesses, while Hong brought his parents and I was the +1 guest. So honoured to be part of their special day 🙂

In comparison to my own ROM at JPN (I got a rather chatty Assistant Registrar), Helen and Hong’s ceremony was quick and fuss-free. After signing some documents and exchanging rings, they were formally declared husband and wife in the eyes of the law, and given their marriage certificates. A life of wedded bliss awaits! 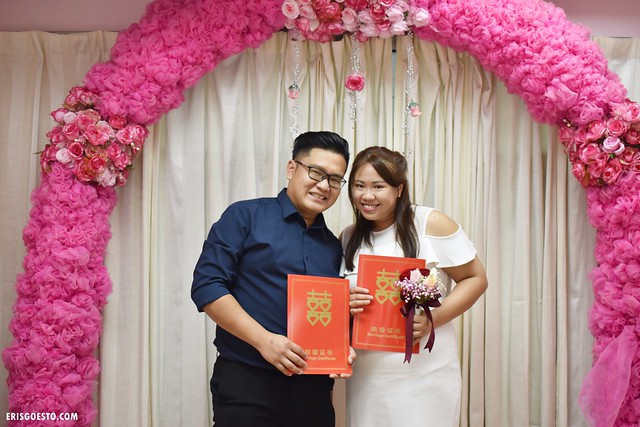 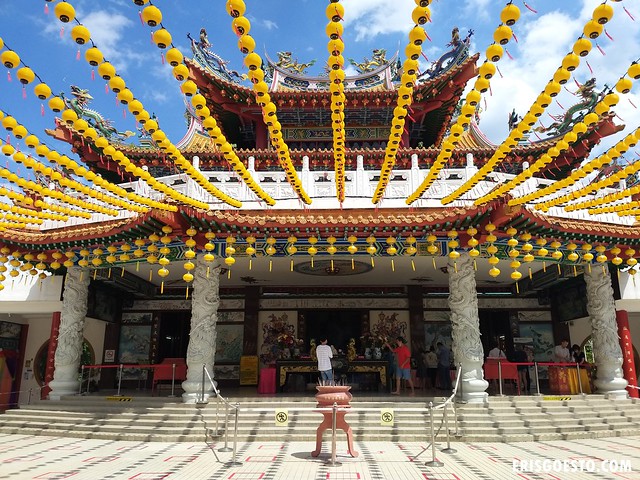 We made our way up to the shrine and the temple’s magnificent courtyard for some photos. It was a Saturday but the temple was quite empty, so observing social distancing was not a problem. 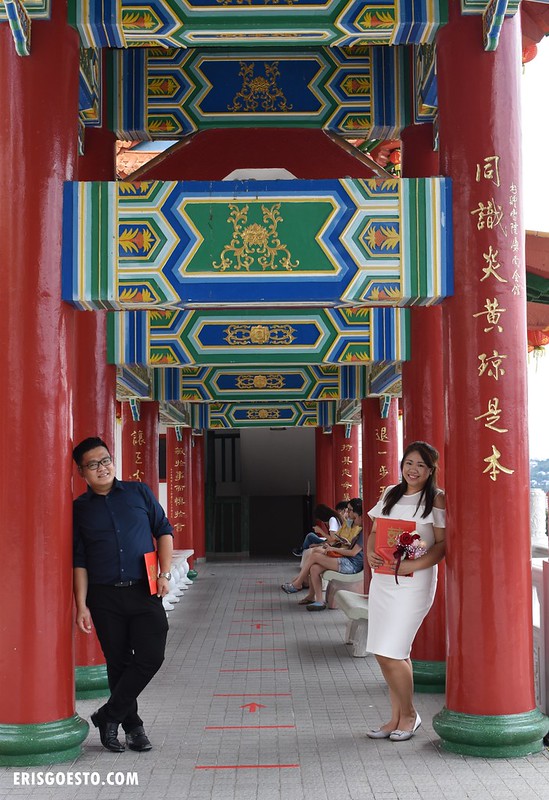 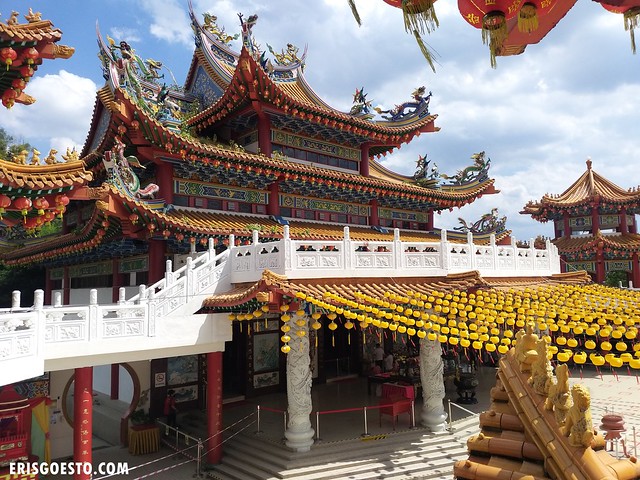 After the photo taking, the new couple left and I hung around abit more to explore/pray/snap more photos. 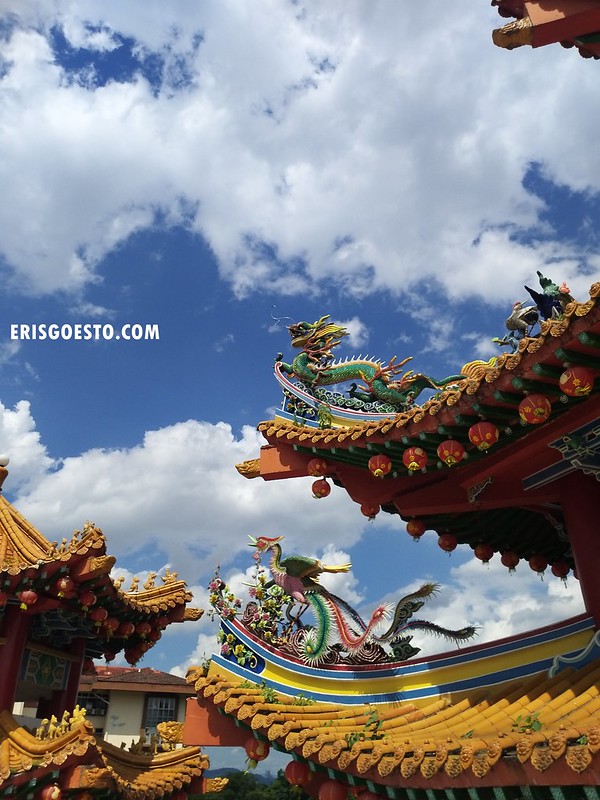 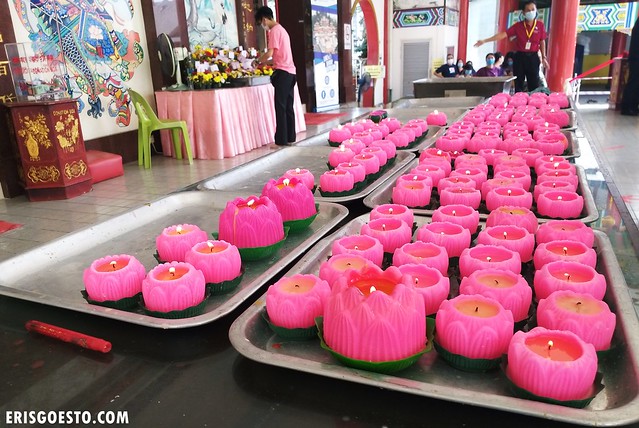 There are new SOPs to observe when entering the prayer hall. Temple volunteers are at hand to control visitor traffic, and there are clear indicators on the ground as to where you’re supposed to go – as much as possible, they want visitors to follow these marks when offering up prayers. 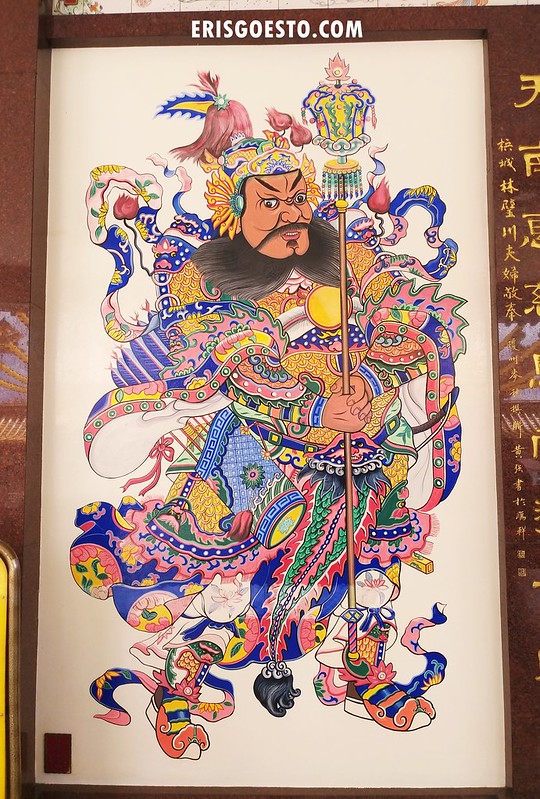 Vivid painting of a ‘door guard’ – images of fierce general-gods that are meant to protect the temple and keep evil spirits away. 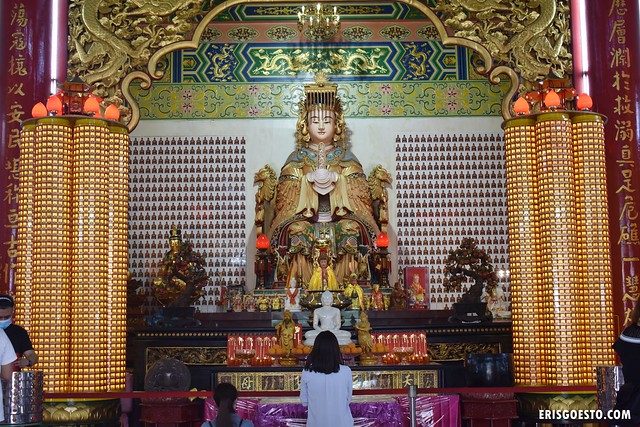 The principal deity at Thean Hou Temple –  the Mother Goddess. She is flanked by two other goddesses, Goddess of Mercy (Gwanyin) and Waterfront Goddess (Swei Mei). There are deity statues seated at the bottom of the large golden ones, surrounded by tall prayer light towers. Walls are lined with pictures of Bodhisattvas, donated by devotees to accumulate merits (or karma). You can get joss sticks outside by making a small donation. 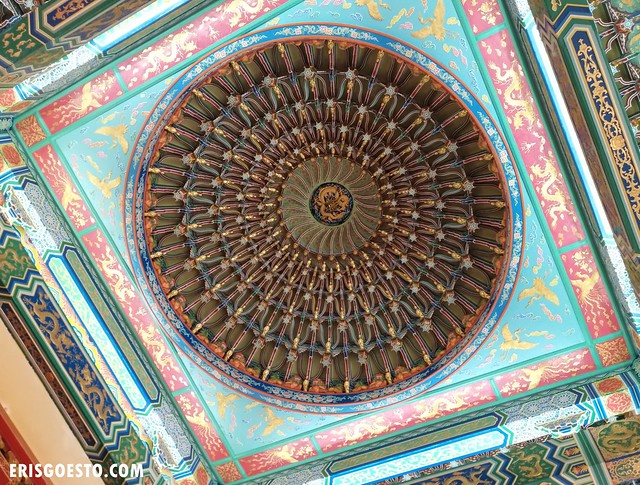 One of my favourite architectural fixtures at Thean Hou is the ceiling dome, which is intricately carved with a stunning pattern. The effect is mesmerising. 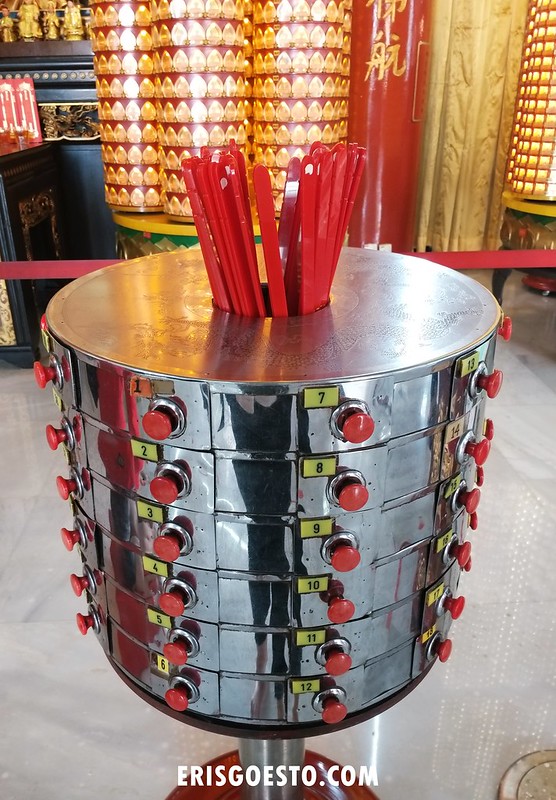 Gone are the days of the traditional ‘kau chim‘ (fortune telling) where you shake a bunch of sticks until one falls out and you get a reading from the resident monk or fortune teller. These days, you grab the sticks from a holder, bunch them up and toss them. You get the number from whichever stick is poking out above the rest, then look for the corresponding number from the drawer and get your fortune. Hand sanisiters are placed next to them so you can sanitise before and after. 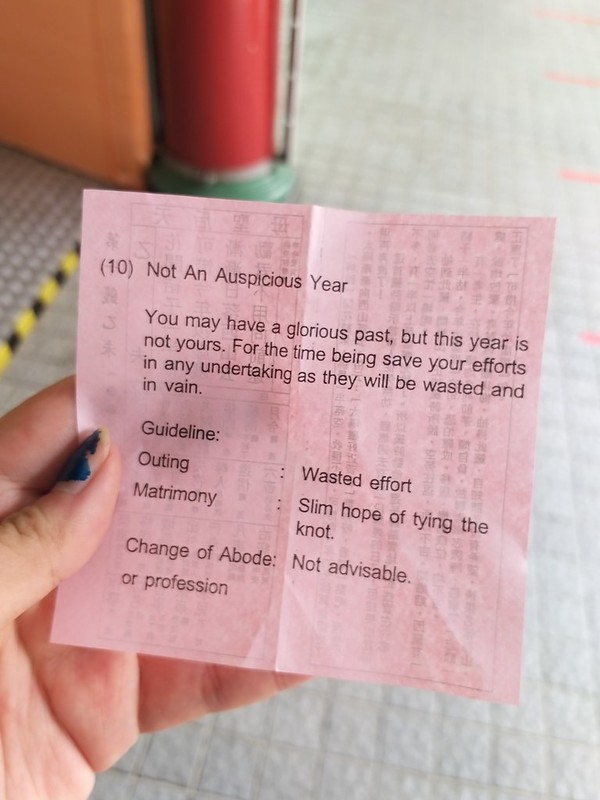 Note: Parking can be difficult to find in the area. If you are driving, the temple has a parking lot but a RM5 fee (channeled to the temple as a donation) applies.