Possibly one of the most scenic coastal driving routes on the planet, the Great Ocean Road is a 243-kilometre stretch on the southwest coast of Australia, passing through deserted beaches, craggy cliffs and lush rainforests. Built by Australian and New Zealand World War I soldiers who returned from the war between 1919 and 1932, it is also the world’s largest war memorial. The most well-known attraction along the route is the 12 Apostles – a collection of 12 (now only seven remain, because they crumbled into the sea from erosion) limestone stacks rising majestically out of the azure blue waters of the sea.

Ideally, three days is perfect to drive and visit the many quaint seaside towns along the route – but since our itinerary was super packed, we had to fit everything into one. If you’re pressed for time, this itinerary might be useful for a small but all-round taste of what the route has to offer. 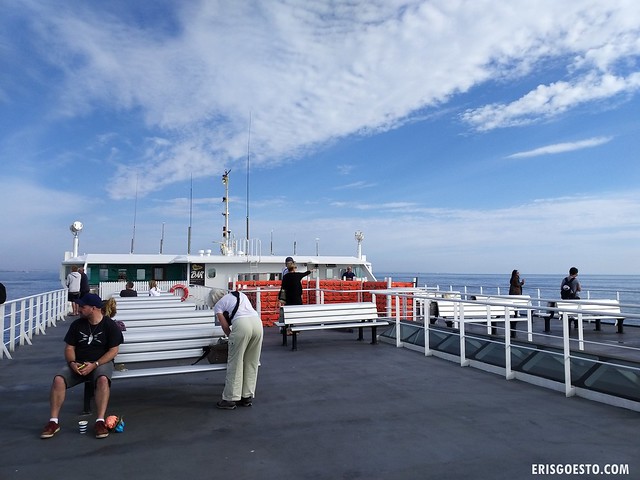 Most travellers start their journey from Melbourne and make their way to Apollo Bay, but since we departed from the Mornington Peninsula, we took the Seaport Ferry from Sorrento, docking at Queenscliff. The check in + ride took approximately an hour and 15 minutes, and we went up to the rooftop deck for beautiful views of Port Philip Bay dotted by boats and yachts. The inside of the ferry was cosy as well, with a cafeteria selling refreshments.

From Queenscliff, we drove two hours to the Great Ocean Road Memorial Arch. Along the way, we took in the gorgeous coastal sights of Australia’s southwest coast, dotted with beaches and natural cliffs lined by stunning blue waters. 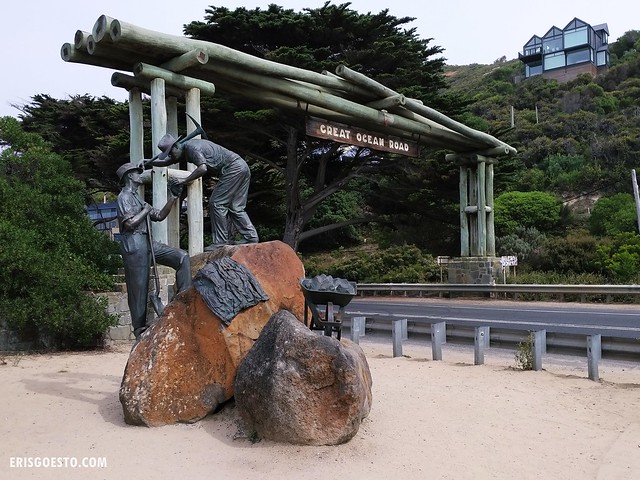 The Great Ocean Road Memorial Arch marks the ‘start’ of the road, and is one of its most photographed attractions. There are plenty of parking spots for a quick stopover, statues of the soldiers labouring on rocks, as well as information boards on the story of how the road was built. Visitors can also walk down to the nearby beach.

Constructed as a tribute to some 3,000 ANZAC soldiers who returned from fighting in World War I, the GORM arch is the third one to be erected after a truck and a fire caused damage to the previous ones, respectively. It is made from wood with sides of stone and cement, and the original wooden sign from 1939 still hangs above the archway.

If you want an elevated view of part of the Great Ocean Road, Teddy’s Lookout at the small (but touristy) town of Lorne is a good place to stop by. The beach in town is popular with sunbathers, picnickers and surfers. Naturally, where there are tourists, there are also local scavenging wildlife, such as seagulls… 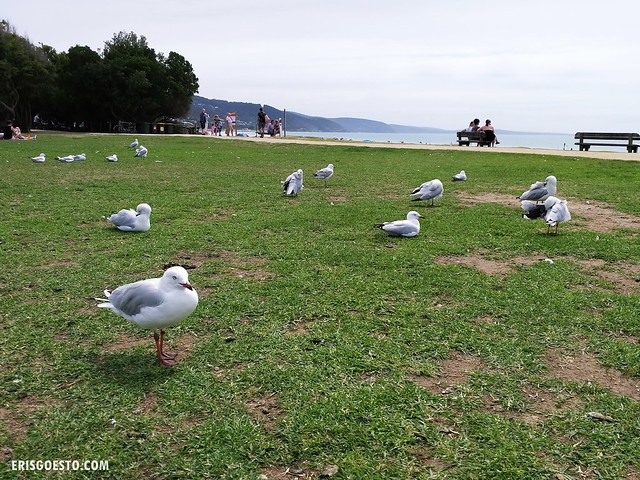 …literally all over the green near the beach. They’re used to human presence, and are not afraid even if you walk very close to them. 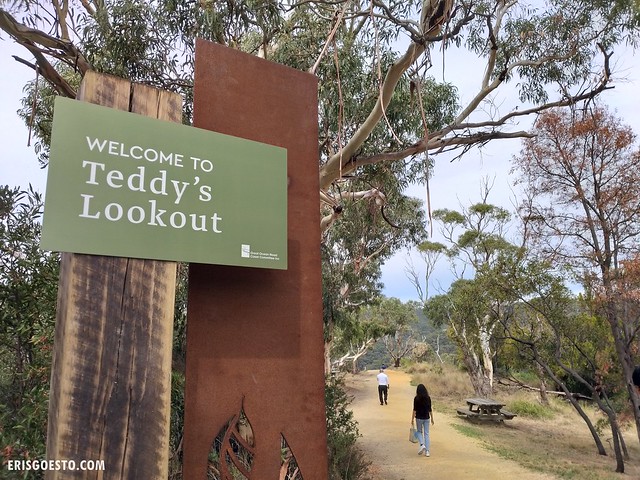 Thankfully we didn’t have to hike all the way up, as cars are able to access the hill where the lookout point is. 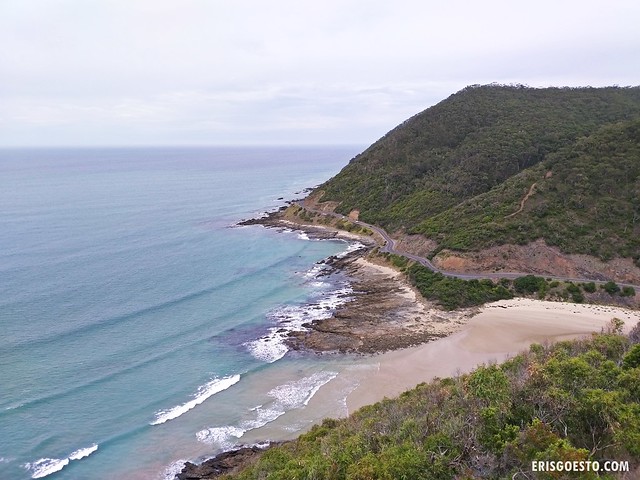 The top of Teddy’s Lookout features a small viewing platform with sweeping views of the surf breaking at the mouth of the Saint George River, as well as gorgeous emerald green hills and the road snaking at their feet. Not sure how the place got its name but whomever Teddy was sure knew where to get the best views in town! 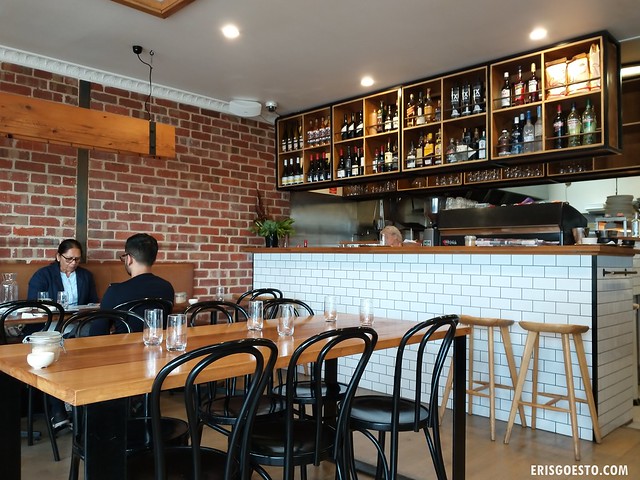 Like Lorne, Apollo Bay is a seaside town, popular among tourists as a base to explore the rest of Ocean Road. As such, you will find lots of restaurants, souvenir shops, hotels and accommodation here. Apollo Bay is big on natural beauty, so apart from its pristine, warm beaches that are great for surfing, angling and swimming, visitors will also find lush rainforest and magnificent waterfalls here. Being a coastal village, the seafood is fresh, but expect prices to reflect its tourist-centric industry.

A good place for lunch is La Bimba, which offers great views of the seafront as you dine on contemporary Australian cuisine with produce sourced locally. Will put a separate post on the food, so stay tuned! 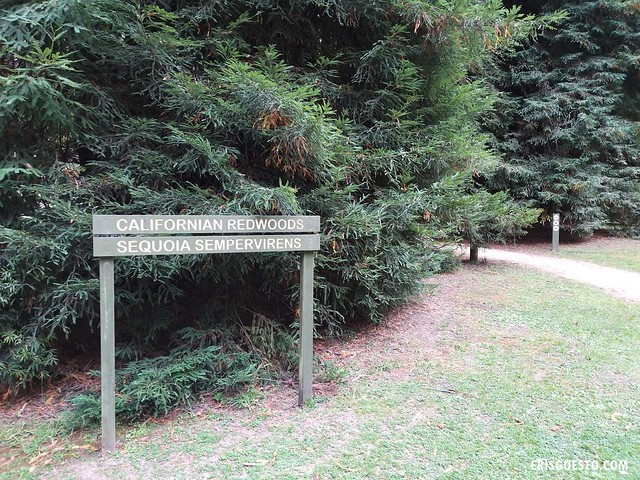 One of my greatest regrets from my trip to San Francisco was the fact that I didn’t manage to see the giant Californian Redwoods. This trip was my second chance, and the experience did not disappoint. 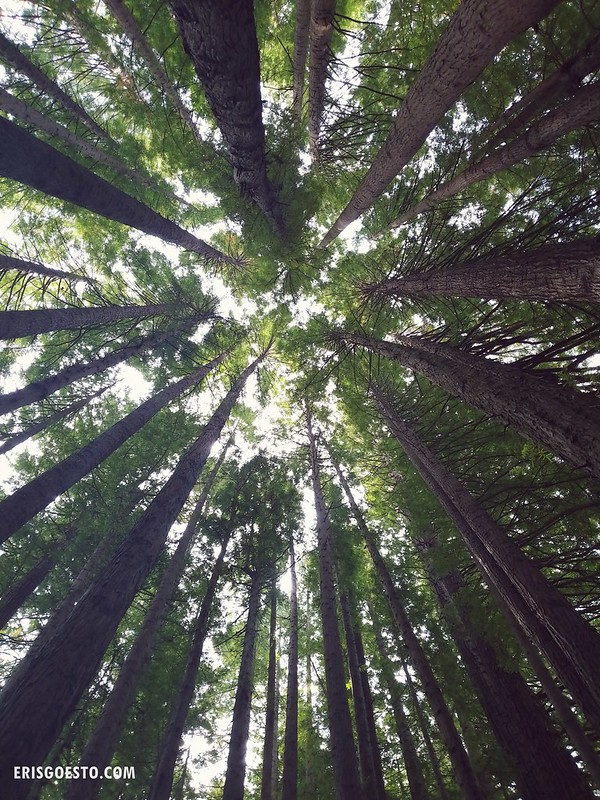 Located five minutes away from Beech Forest, the Redwoods of the Otway Ranges were planted by the local government some 85 years ago. Today, they tower over 60 metres high, forming a shady canopy with minimal sunlight hitting the forest floor. Staring up with mouth agape, I was struck by just how large and tall these trees are – despite being comparative ‘babies’ to older redwood trees that can live up to 2,000 years old. Redwoods are basically living fossils, and some have survived longer than many human civilisations. When you think of the sheer history and the things these trees have lived through, it’s just… overwhelming. 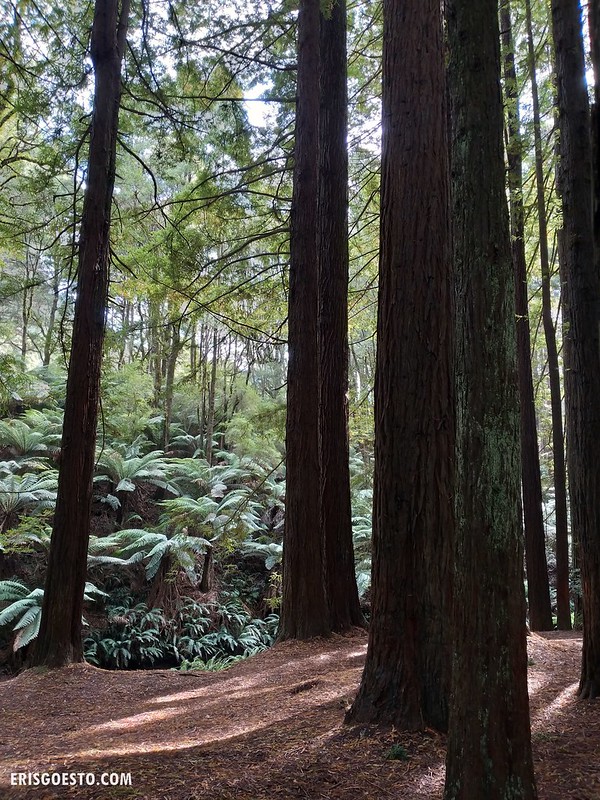 The landscape, surrounded by ferns and shrubbery as well as small, flowing streams with crystal clear water, create an enchanting atmosphere. 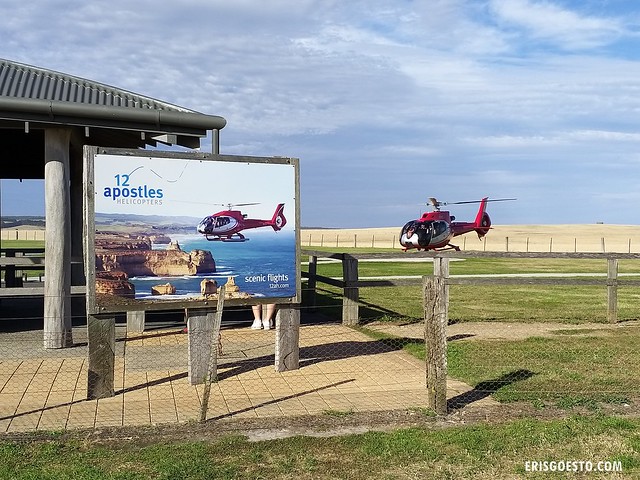 We finally arrived at the highlight of our trip at Port Campbell National Park – the 12 Apostles. And we had the best seats in the house to catch the most beautiful scenery in Australia – aboard a helicopter! 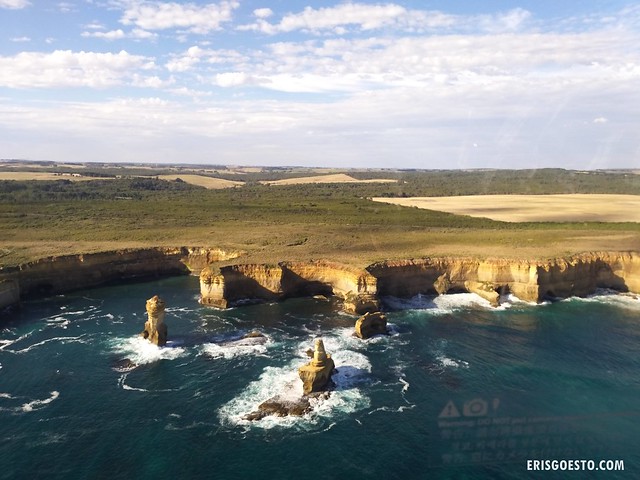 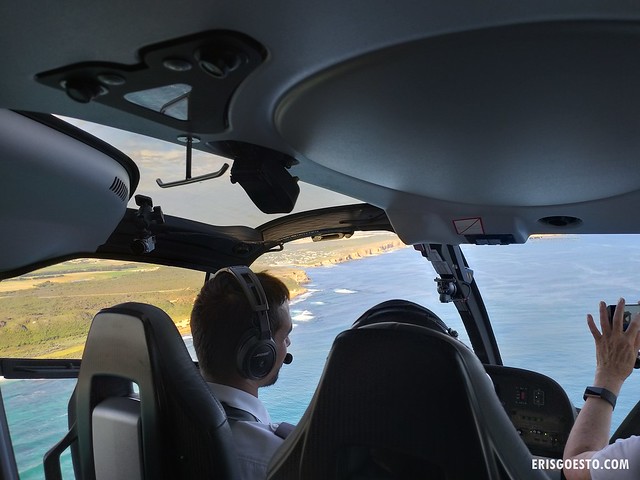 It was my first time flying in a heli and what an experience it was! Strapped into the backseat, the roar of the rotors was deafening even with headphones on, so it was difficult to hear what the pilot was saying. Even so, the views spoke for themselves, as we gently swerved over the majestic landscapes of foamy white waves crashing against the cliffs. At certain points, the heli banked sharply, blurring the line between the sky and the sea into an endless blue – it felt like floating in space, but also quite dizzying. 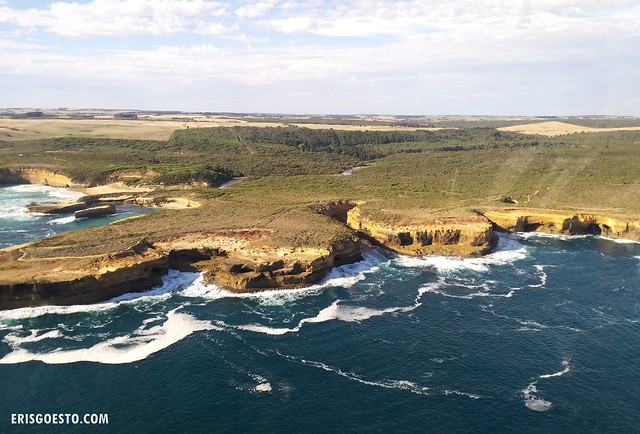 It was a short ride lasting less than 20 minutes, and we were back on the ground in no time. After some more photos, we departed for our night’s accommodation in Port Campbell.

So there you have it – a 12-hour or so itinerary for those who want an all-round experience of the Great Ocean Road and its awesome sights. I hope this guide and the suggestions of places to visit has been helpful, and Happy Travels!