There are moments in life that are simply unforgettable : Looking at your newborn for the first time, achieving a high point in your career, or simply visiting a place that has been on your travel bucket list for a long time.

For me, one of those moments was finally stepping foot into the ancient Buddhist temple of Borobudur, in Yogyakarta, Indonesia. Built in the 9th century by the Hindu-Buddhist Sailendra dynasty, it was abandoned in the 14th century after the Javanese embraced Islam. It wasn’t until the 1800s that British explorers, on the advice of natives, rediscovered the temple and gradually reclaimed it from the jungle growth. Today, Borobudur is Indonesia’s single most visited attraction and a UNESCO World Heritage site. 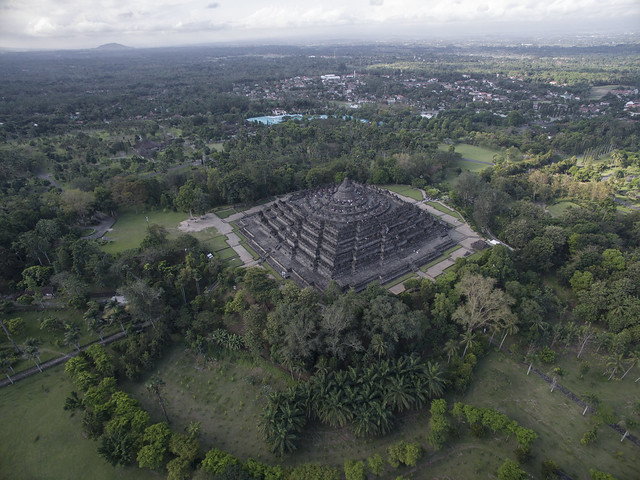 Borobudur has always been a place I wanted to visit ever since I was a kid, after reading about it in books. The night before, I felt like a kid again anticipating a big trip – and despite going to bed early, was unable to get any sleep.

We departed the hotel at 2.30AM. From Yogyakarta City, the temple is some 40km away, a journey that takes approximately 1.5 to 2 hours.

The temple opens at 4 AM for the Sunrise Tour, and you take a 15 minute walk to the grounds in chilly weather, armed only with tiny torches. As we approached the temple, we were greeted by the sight of a gigantic, looming shape in the darkness, and a clear sky of beautiful stars. It was breathtaking, to say the least. 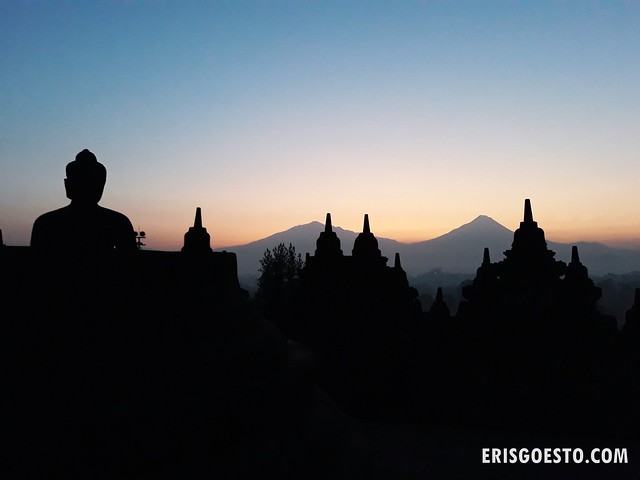 The stone steps are high and uneven in places, so caution is advised. Depending on when you’re visiting, the sun might come out earlier or later. We planted ourselves to face the twin volcanoes of Mount Merbabu and Mount Merapi in the distance, and waited. 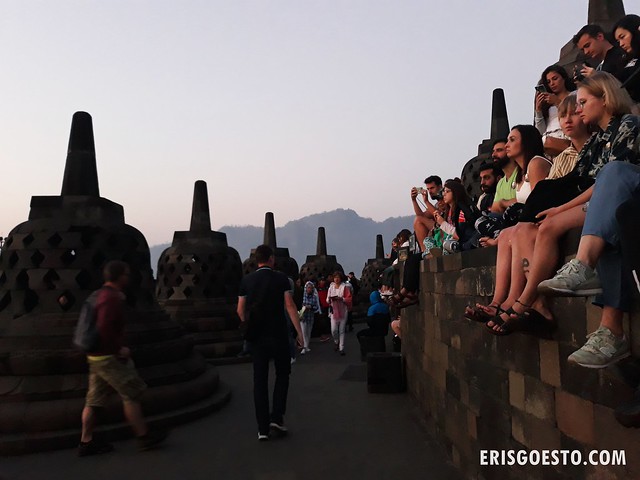 Our guide told us it was actually a ‘quiet’ morning with a lesser number of tourists. Apparently, on busy days, there can be thousands of people in a single sunrise tour! 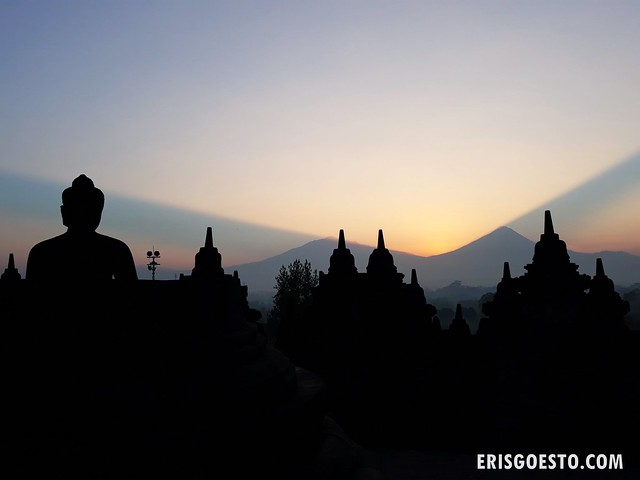 When the sun finally came out, I was mind blown. It rose right in between the twin peaks, the rays forming a stunning V-shape. The colours – pink, blue, orange – contrasting against the dark silhouettes of stupas, was ethereal.

The crowd collectively oohed and ahhed and snapped millions of pictures. I took a few, stood still, and let the powerful emotions wash over me. Its difficult to put into words – I felt truly blessed to be alive, to be in a place that has withstood the long passage of time. 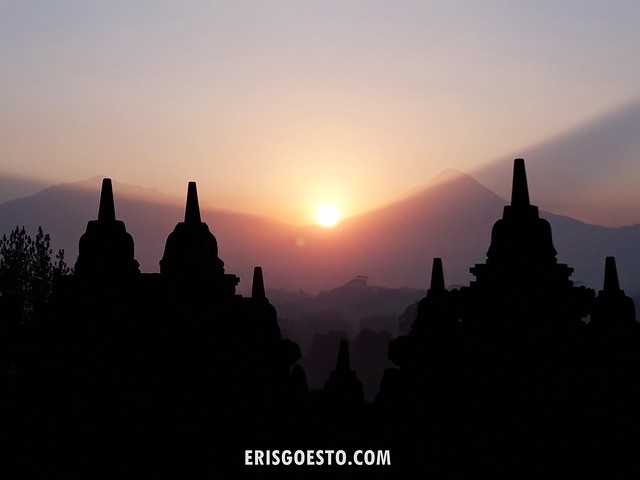 As the temple is gradually bathed in the morning light, details that were cloaked in darkness become visible : the stupas and reliefs, the statues, the intricacy of its structure. 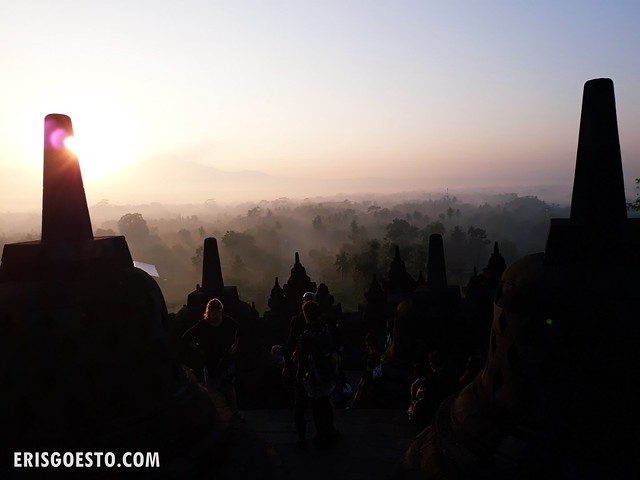 The most magical thing, for me, was how different the surroundings looked from different directions – standing at the Merbabu/Merapi gate, everything was a blazing gold and orange, but walk a couple of steps to the other gate and you see an amazing sea of blue and green, shrouded in mist. 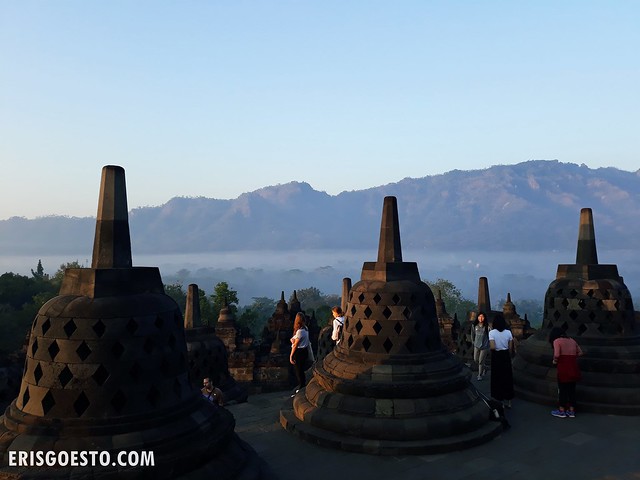 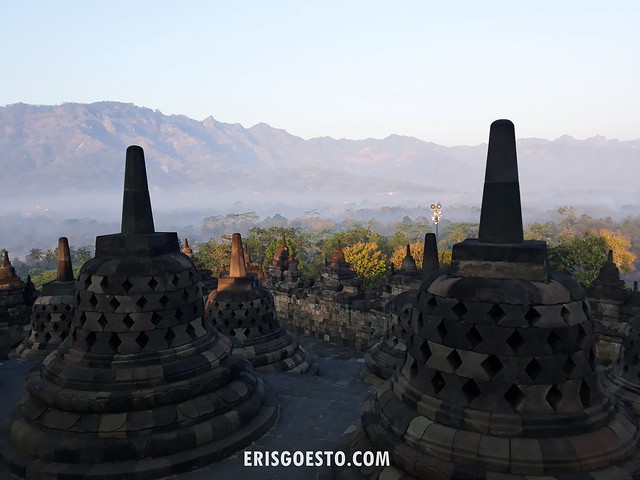 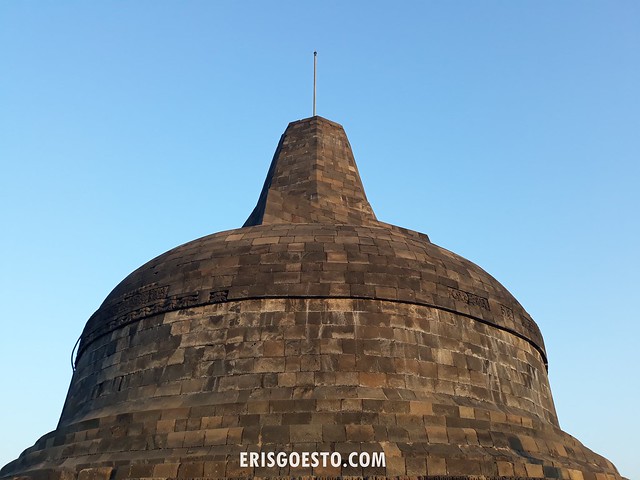 In daylight, visitors will see that the temple consists of nine stacked platforms – the bottom six of which are square, and the top three circular, topped by a big central dome. When viewed from above, it resembles a mandala, which in Buddhism and Hinduism, represents the universe.

We were extremely lucky to get a knowledgeable local guide, who was able to explain to us, in detail, about the history and meaning behind many of the temple’s reliefs and symbols. 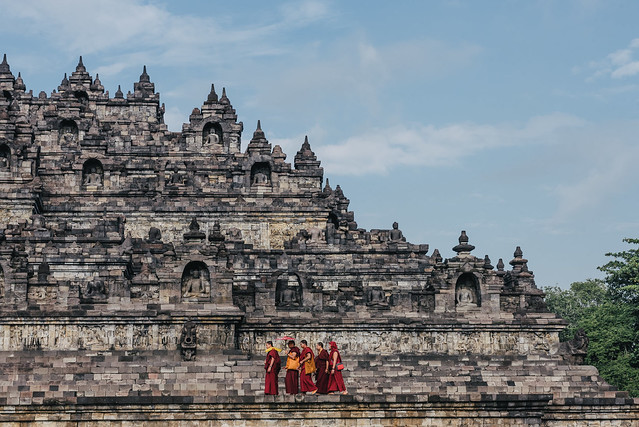 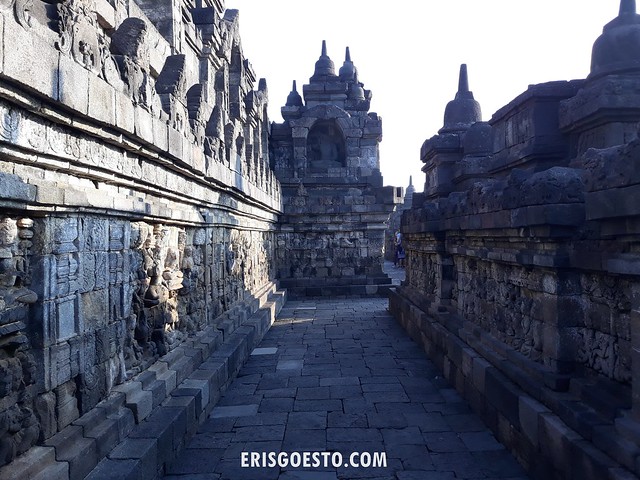 Perhaps the most unique thing about Borobudur is that its more like a giant storybook etched in stone, since there are no shrines or chambers like other temples.

The temple’s bottom levels represent the ‘mortal’ realm, or ‘realm of forms’, which are decorated with thousands of reliefs depicting tales of Buddha’s life, the life of his disciples, and legends and figures from Buddhist mythology. 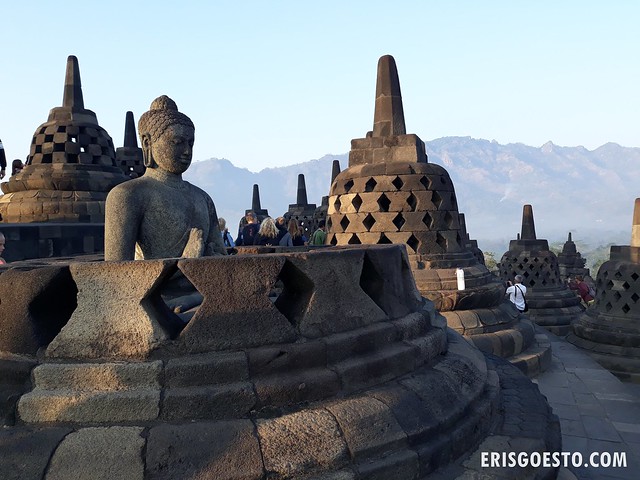 Following the principles of Buddhism, the top three levels represent achieving ‘nirvana’ – moving from ‘form’ to ‘formlessness’ as we become free from suffering and the mortal cycle of birth, pain, old age, and death. Here, visitors will find 72 perforated stupas, each housing a statue of a stone Buddha within. The central dome on top represents the final state that all beings should strive for, ie Nirvana. 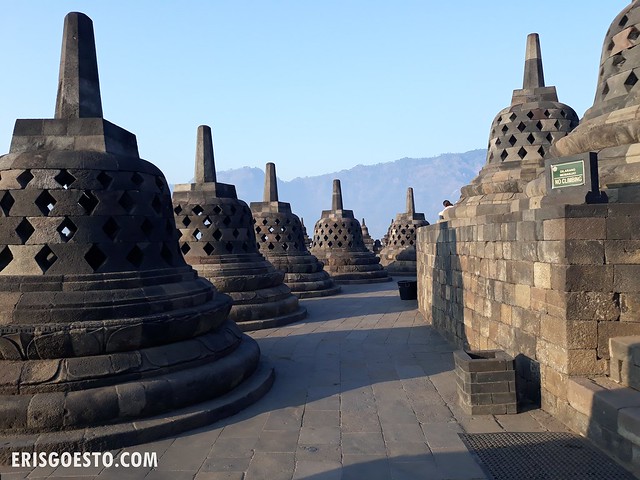 The main material or building blocks of the temple are volcanic stone, extracted from the nearby volcanoes, hence the grey colour. Its close proximity to the volcanoes means that the temple is often under threat from eruptions. In fact, several years ago, Borobudur was closed for several months to facilitate a cleanup, after Mount Merapi erupted and covered the entire complex in a layer of volcanic ash. 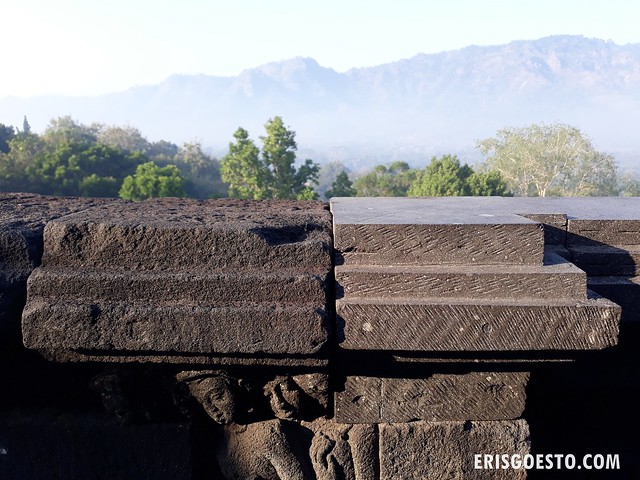 Old stone (left) and new stone used to restore parts of the temple that were destroyed in multiple eruptions over a thousand years. Some of the reliefs are, in fact, faded beyond repair. 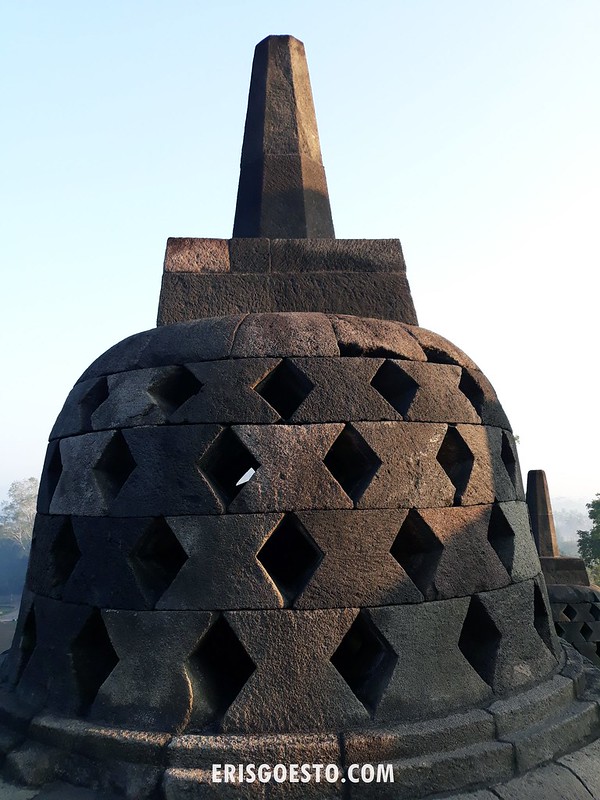 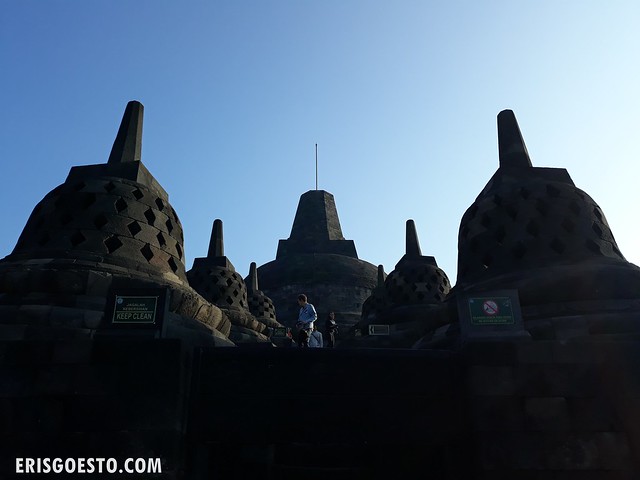 Conventionally, one will visit from the bottom levels to the top, but since we were already on the upper levels, we made our way down instead. Although one will see many Indian elements, Borobudur incorporates touches that are uniquely Javanese, blending with the local mythos and architecture. 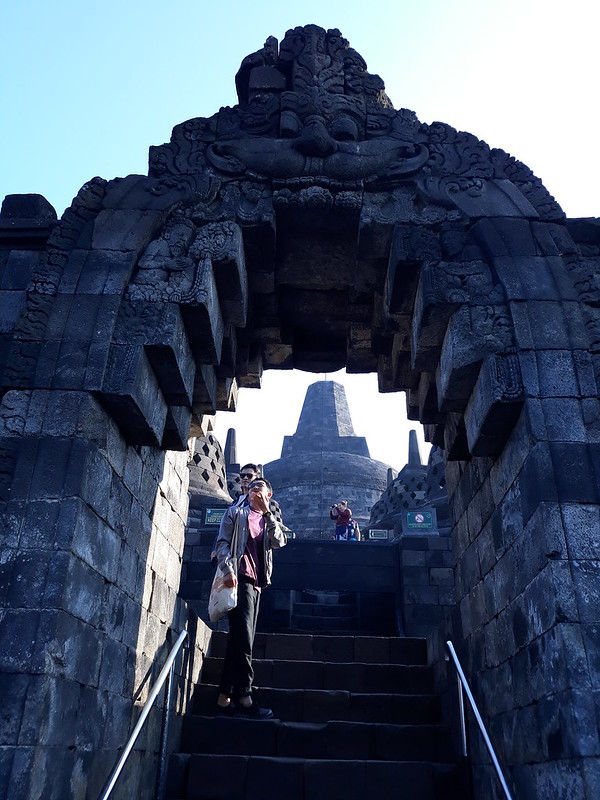 One of the most fascinating explanations that our guide provided was that of Kala-Makara, the monster that sits over archways (above).

A ravenous demon lion known as ‘Kirtimukha’ in Hindu mythology,  it was created by Lord Shiva and is a representation of the god himself, devouring everything in its path. Although I can’t find any research online to back this up,  our guide said that it was representative of time – which, to me, was an apt description.Time devours everything and reduces even the mightiest kingdoms into rubble. 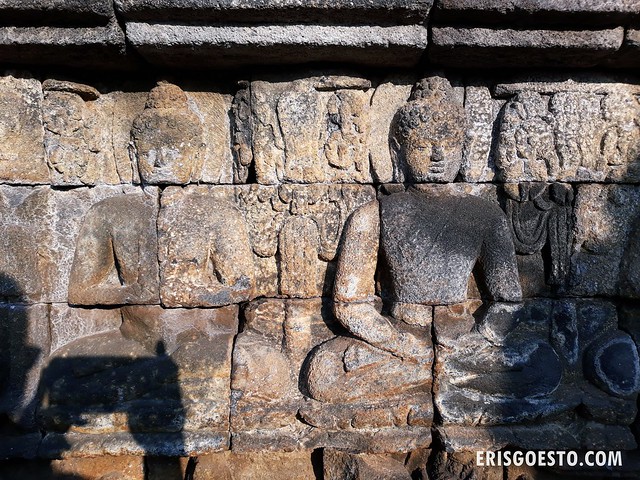 There are thousands of reliefs within Borobudur. Some are depicted in continuous chapters – like pages of a book, you explore each as you make your way around the square platforms. Others tell a story within a single panel. One can’t help but marvel at the level of detail and the excellent craftsmanship of Borobudur’s artisans and builders. They did not have the tools and technology that we have – and yet were able to produce such amazing works of art that have withstood the test of time for over a millennia. 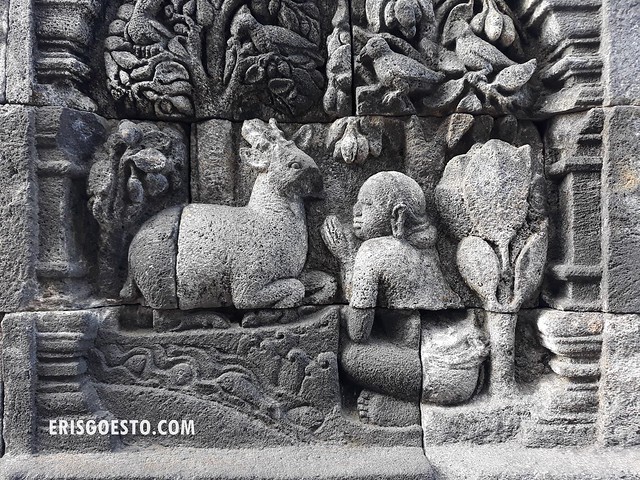 Scene of Buddha as a deer in its past life. 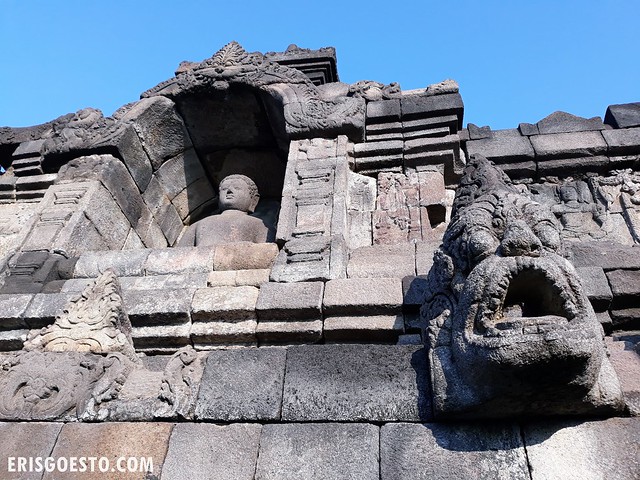 Similar to the gargoyles of Europe, Borobudur has water spouts shaped like mythical creatures such as monstrous lions and makara (a type of sea monster), which were used to drain water from the structure when it rains. As for Buddha statues, there are about 504 statues within the complex, although originally there might have been more. 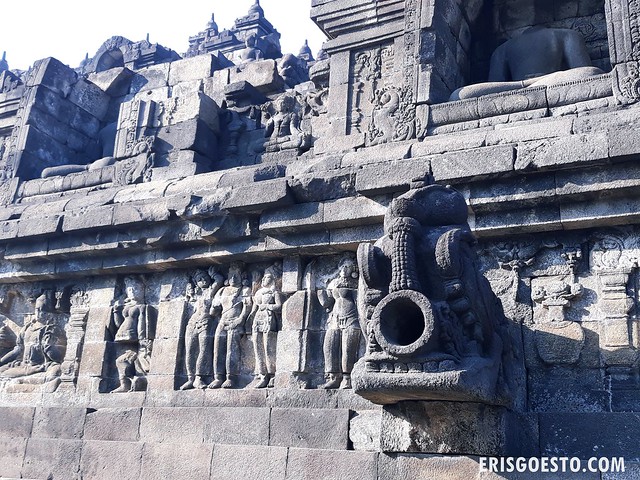 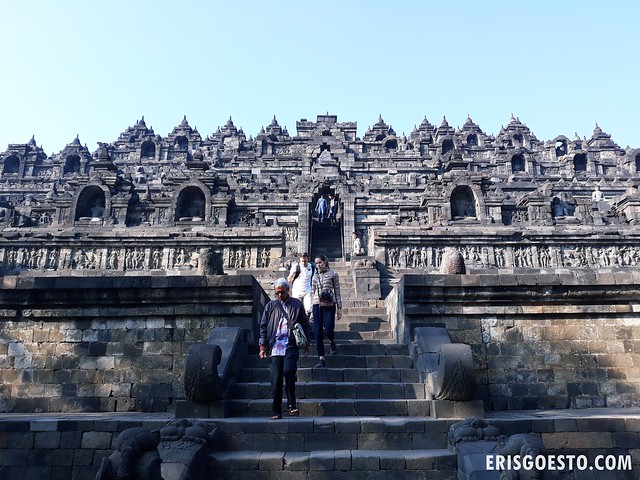 Clearer picture of the tiers in daylight 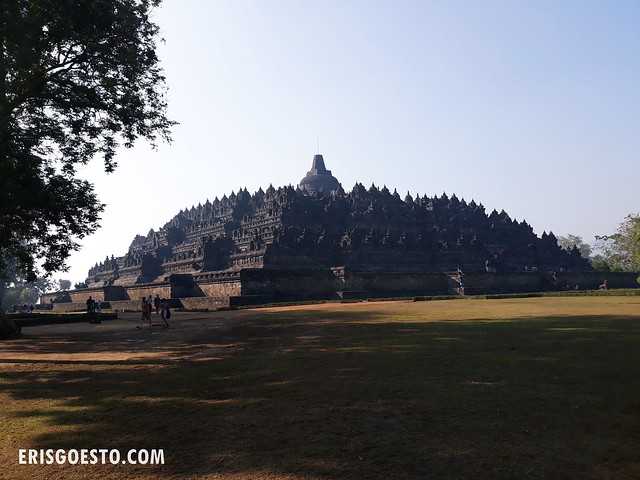 Even for someone living in the 21st century, an era of skyscrapers and giant buildings, Borobudur still took my breath away – so I can only imagine how it must have felt for visitors and pilgrims in the past when they first laid eyes on this magnificent structure. The temple is still an important place for Indonesian Buddhists, and is where they have a grand Wesak Day celebration every year to commemorate the birth of Buddha.

Tips: Wear proper shoes and bring a scarf! It gets quite chilly in the morning. 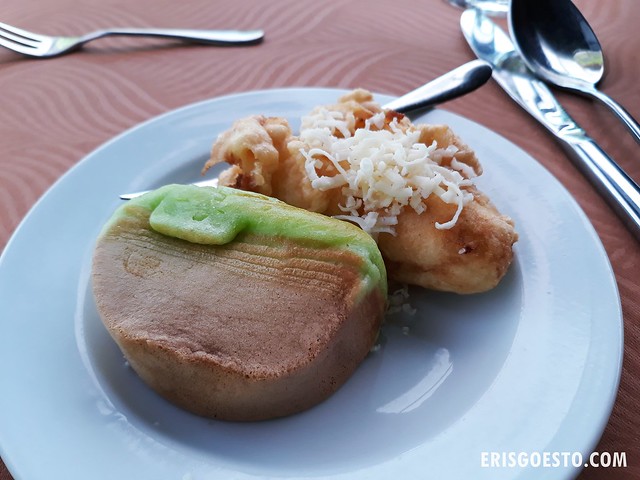 The package included breakfast at Manohara Restaurant, which is where we set off for the tour earlier. The kuih-muih (cakes) and fried banana topped with cheese was awesome after all that walking! 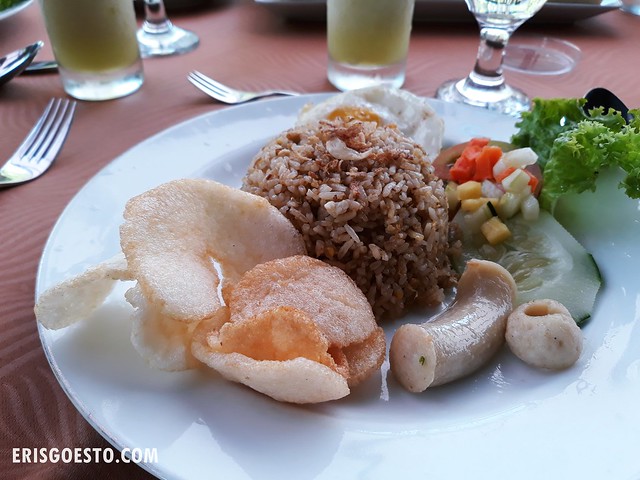 Hearty fried rice meal with sausages, crisps and side of salad.

By Public Transport: From the city, take the Trans-Jogja busses 2B and 2A to Jombor Bus Terminal in northern Yogyakarta. There, board a bus that goes directly to Borobudur Bus Terminal (trip of 60 – 90 minutes). From there, walk 5 minutes to reach Borobudur Temple.

By Minivan: Some tour operators offer packages that take you directly to Borobudur, or may stop at attractions along the way.

10 thoughts on “Travelogue Yogyakarta: The Ancient Temple of Borobudur”