Ever since a back injury in my teens, I’ve laid off extreme physical activity. The most I’ve ‘exerted’ myself is an hour at the gym, and that’s on a stationary exercise bike lol.

I was in Bario, Sarawak recently, and the media group I was with decided to visit one of the Eco-Shelters that Volvo Malaysia had erected for hikers and locals along the Bario Ancestral Trail, as part of a CSR project.

I was apprehensive. The only experience I had with the jungle was a school camping trip in Pahang back in Form 3, and it wasn’t exactly pleasant for this through-and-through city girl. Top that with me being a total klutz, and we have a recipe for disaster. After repeatedly asking our Kelabit guide about the trek’s difficulty (he described it as 4-5 hours, moderate) and against my better judgment, I decided to join. We were invited here to write about the CSR project, so the least I could do was go and look at one of the eco-shelters and take some pictures. (Ever the dedicated journalist? :P)

It would turn out to be an… unforgettable experience.

The Bario Ancestral Trail: So called because it was used by the Kelabit people since ancient times, the ancestral trail totals 25km, and takes hikers and locals through thick tropical jungle and hilly terrain up to Batu Lawi, a twin-peaked mountain considered sacred to the Kelabit as well as the Penan who inhabit the region.

Shrouded in legend and myth, the mountains rise up high over the landscape, acting as beacons for locals and travelers. In fact, World War II pilots flying over the region used it as a marker to locate the Bario settlement, since they would have only seen a carpet of green hills otherwise. Today, the entire hike from Bario – Batu Lawi takes 5-6 days (for the locals) to complete. 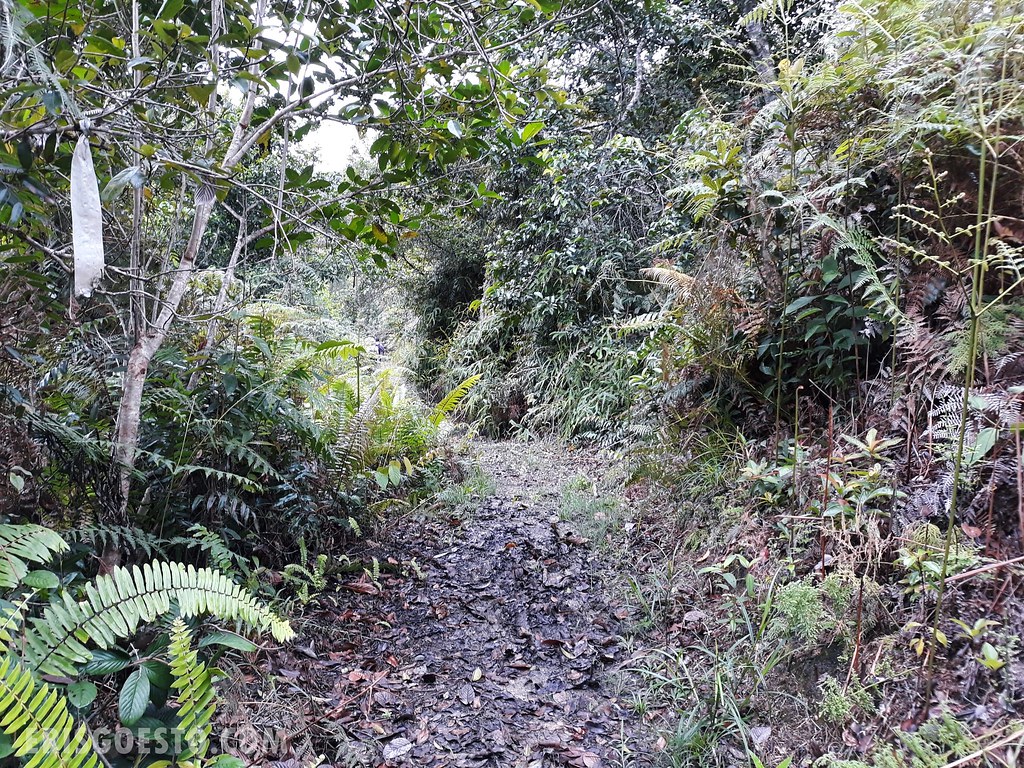 We set off from the village around 9.30AM. The initial walk was easy, since the paths were wide and flat. Along the way were paddy fields and small clusters of homes along the way. The fresh air and beautiful scenery kept us in high spirits. 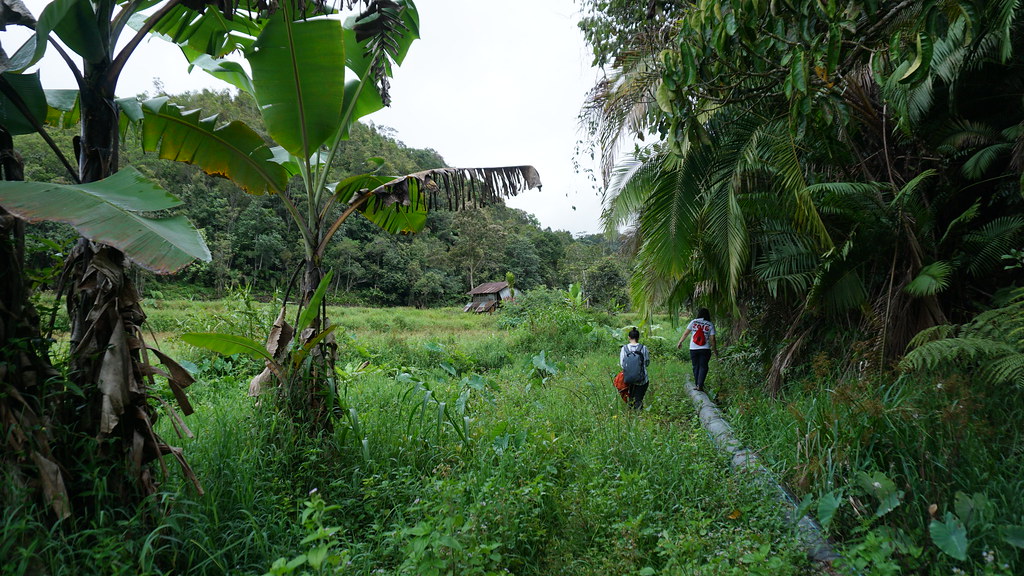 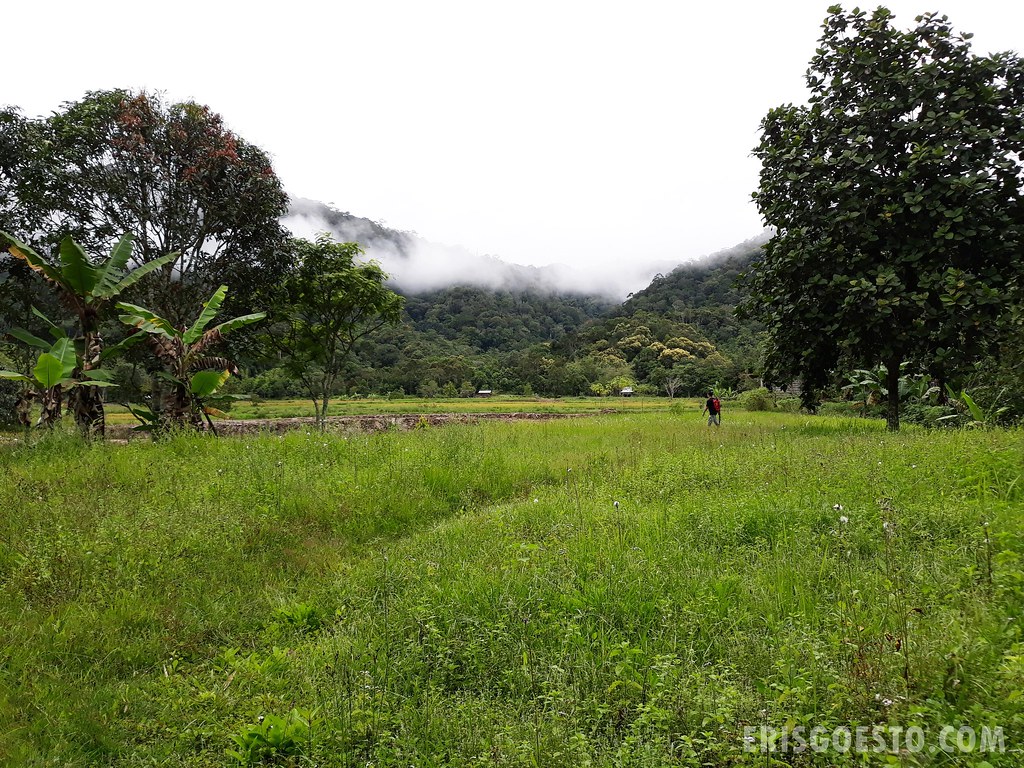 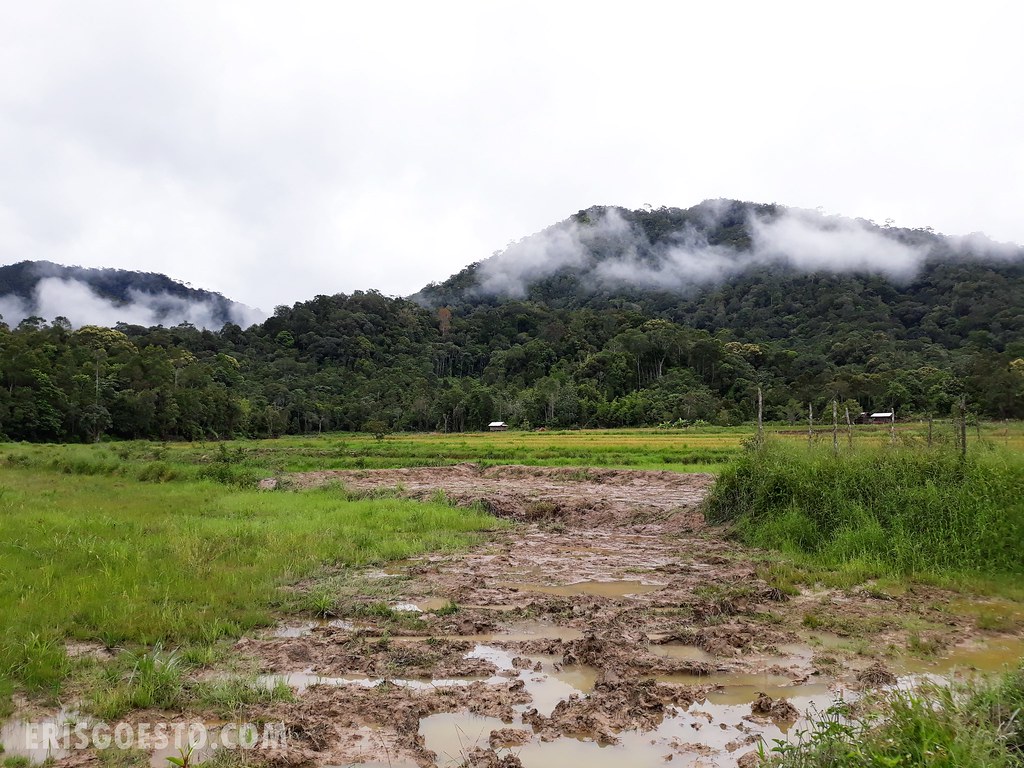 Cutting through a muddy paddy field. 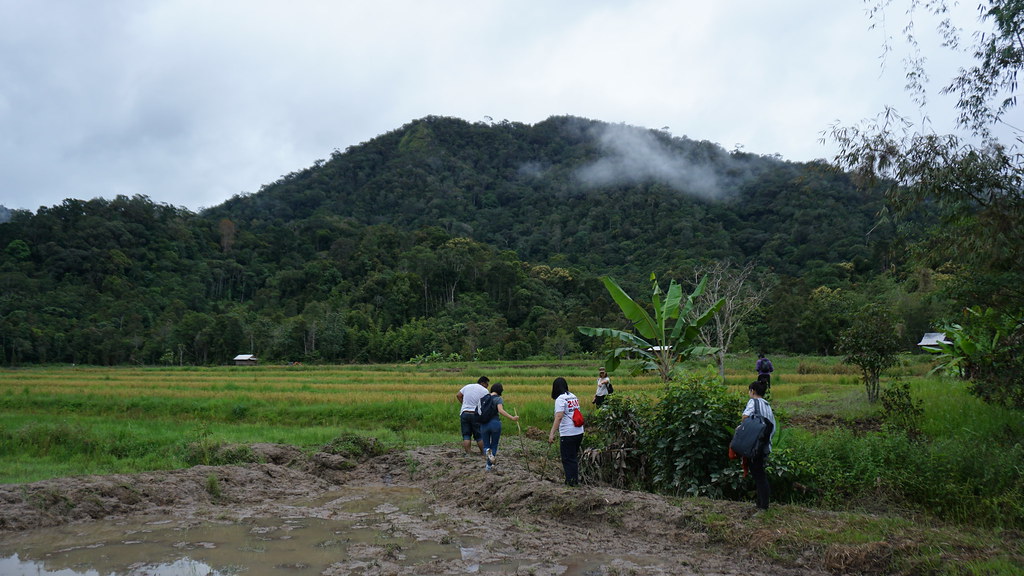 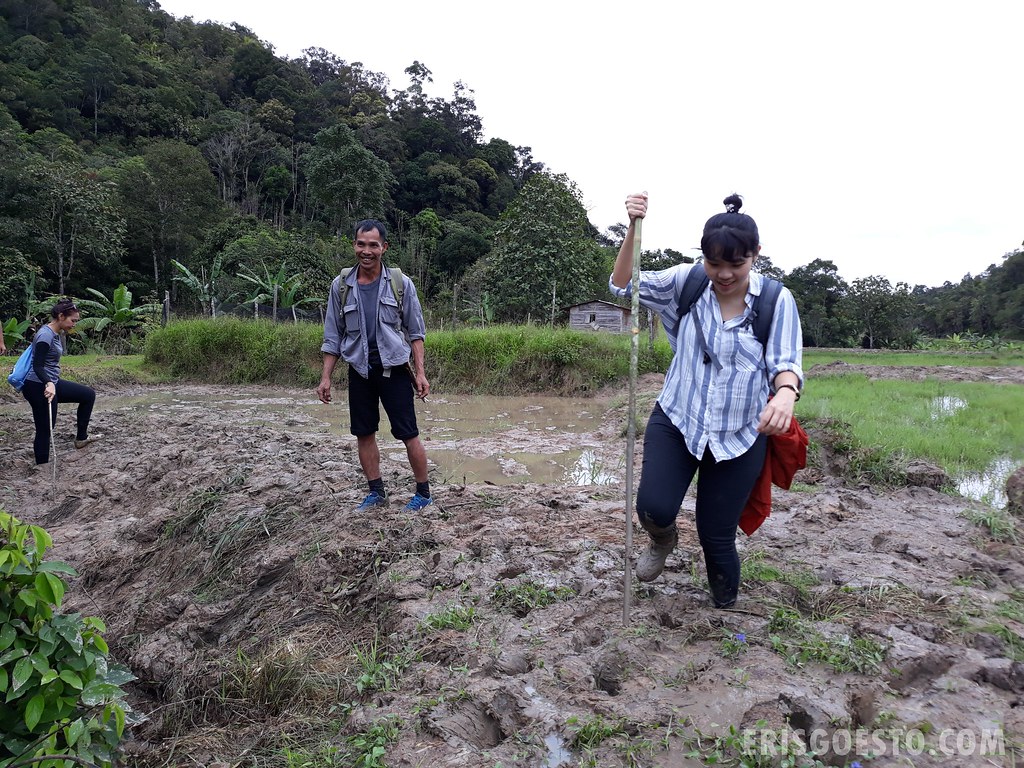 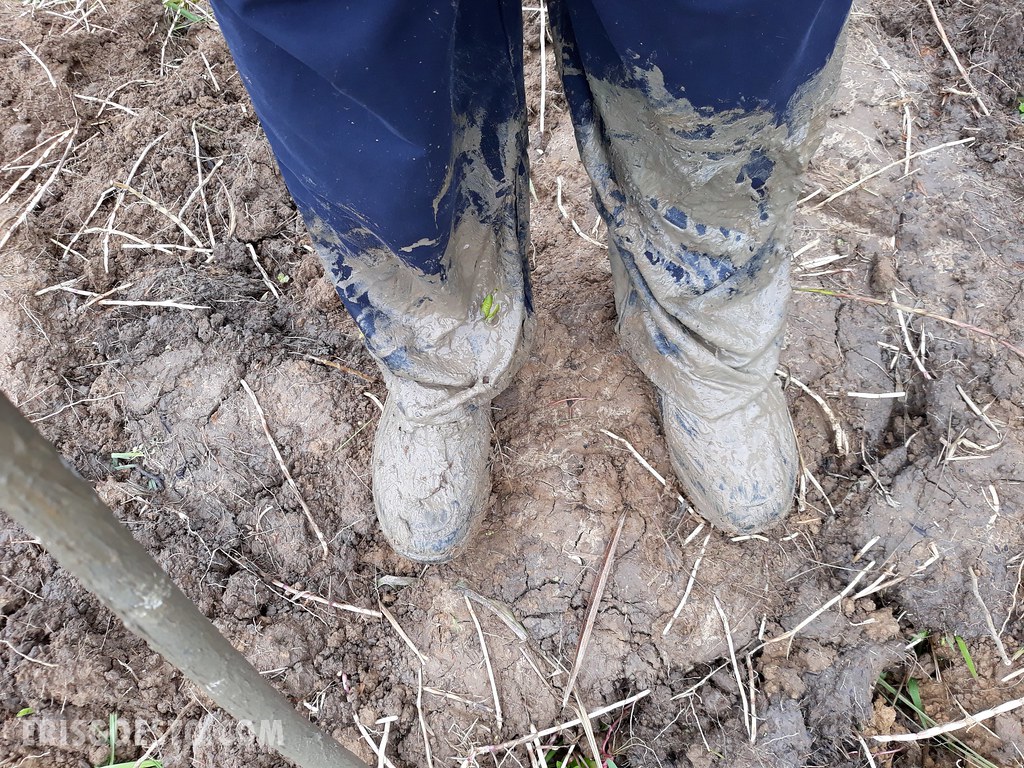 Shoes/pants ruined within an hour lol. I didn’t have proper hiking shoes, so our guide, Julian, suggested we wear rubber ones from the long house. It was a tight fit but I thought it would be fine. Little did I know I would sorely regret this later lol. 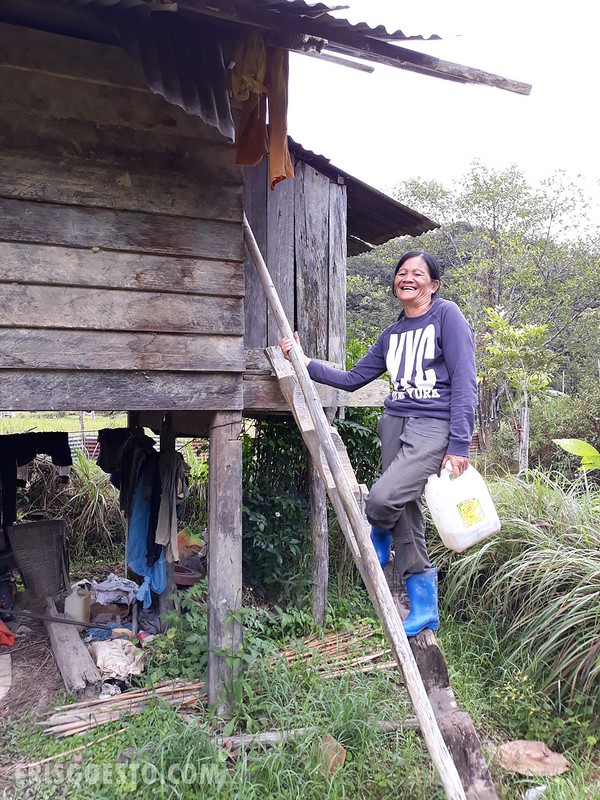 Cute auntie about to head out to the fields. 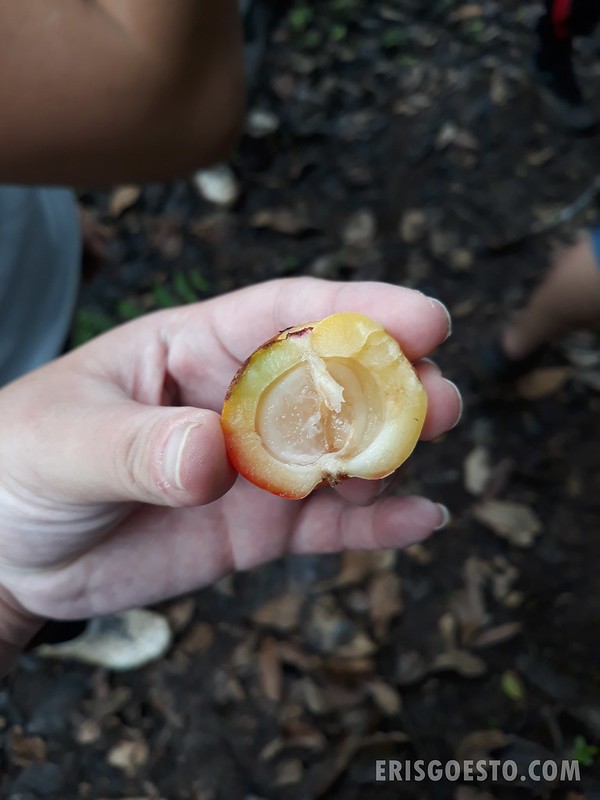 We then started venturing deeper, into the actual trail. Our guide Julian picked some forest fruits for us to taste. It was sour and tart.

I think if I’m ever stranded in a jungle, alone, I would just die within 24 hours lol. I wouldn’t know where to get water, or food, which way to head to, etc. 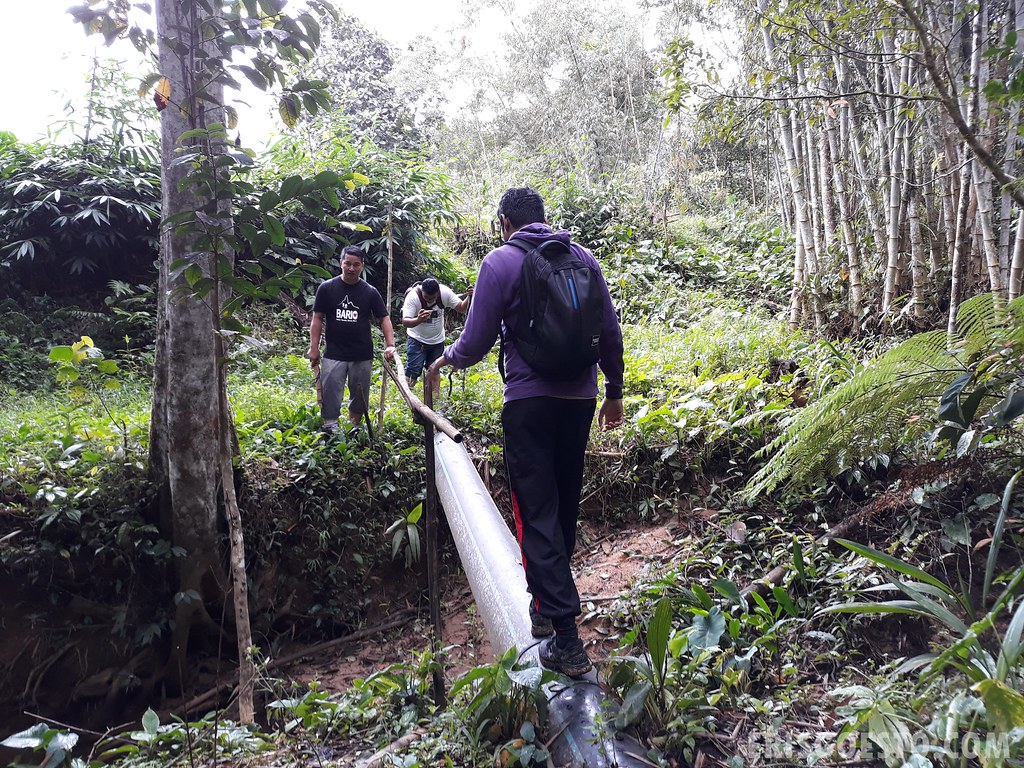 Crossing a pipe, which channeled water from the river to the fields below.

The trek started off light and easy, before it quickly became a challenge. This wasn’t a nice little forest like those you see in books or Western films, with sparse trees and gentle vegetation. This. Was. Hardcore.

Everything was wet and dewy, the air was moist and humid, and the jungle floor teemed with small life: ants, insects, centipedes. Occasionally we would hear a bird call in the distance, or catch a glimpse of squirrels.

Not only were parts of the hill extremely steep, it was also slippery/muddy so I had to rely a lot on my balance. This tired out my legs quickly. The path was not always clear of plants and Julian, who was walking in front, would hack and slash away with a machete to clear it up. Sometimes, thorny vines would latch onto us as we crashed through the brush, digging in and drawing blood. There were parts where we had to cross haphazard log bridges with a sheer 50-foot drop into a ravine below. It was narrow so everyone had to go in single file. 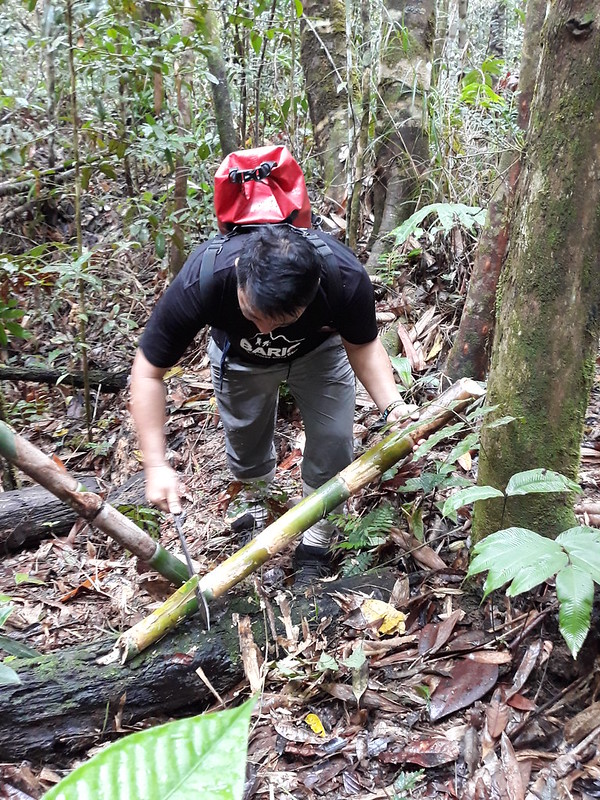 Nature’s drink! Bamboo plants have lots of water stored within. 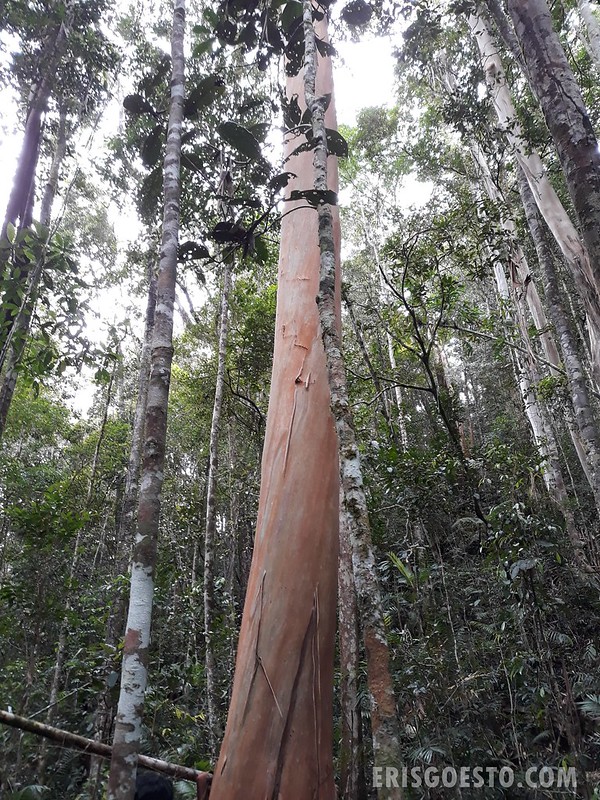 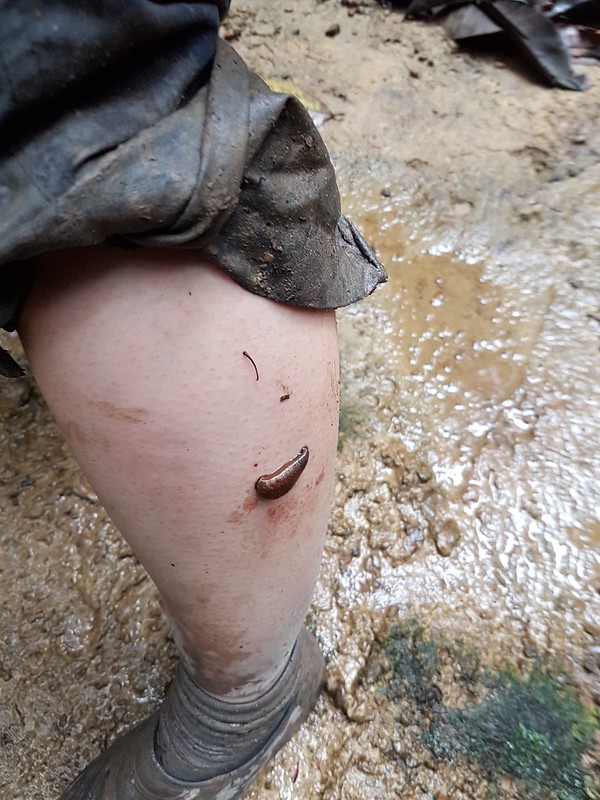 Along the way, we were beset by leeches. They seemed particularly fond of my blood, because I was bitten by no less than fifteen. Another guy in my group also suffered the same fate. There are two types of leeches – the ‘ngau kei’ aka the black ones that fall off when they’ve had their fill, and the thin, tiger leeches which are persistent little buggers Since I wasn’t wearing high socks, they climbed into my pants and up my… thigh. Like really high. More on that later though. 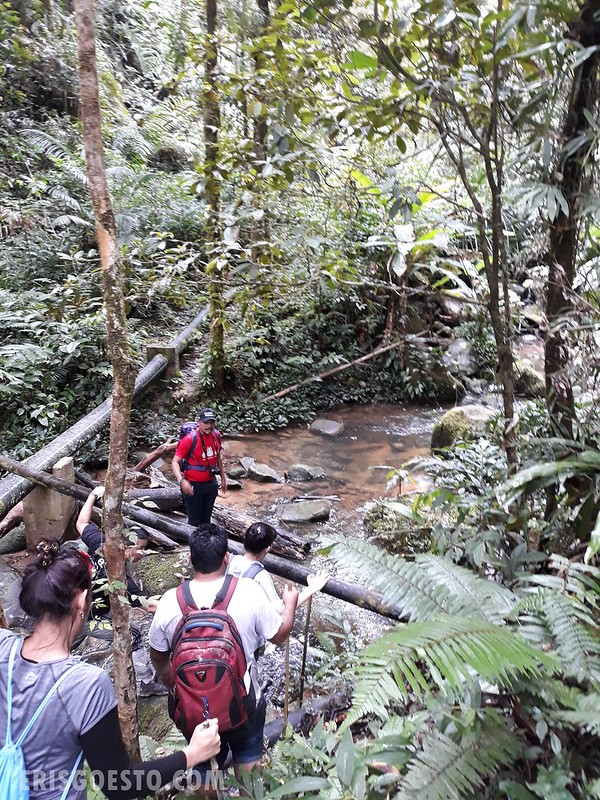 After several hours, we reached a small waterfall where we stopped for a quick packed lunch. 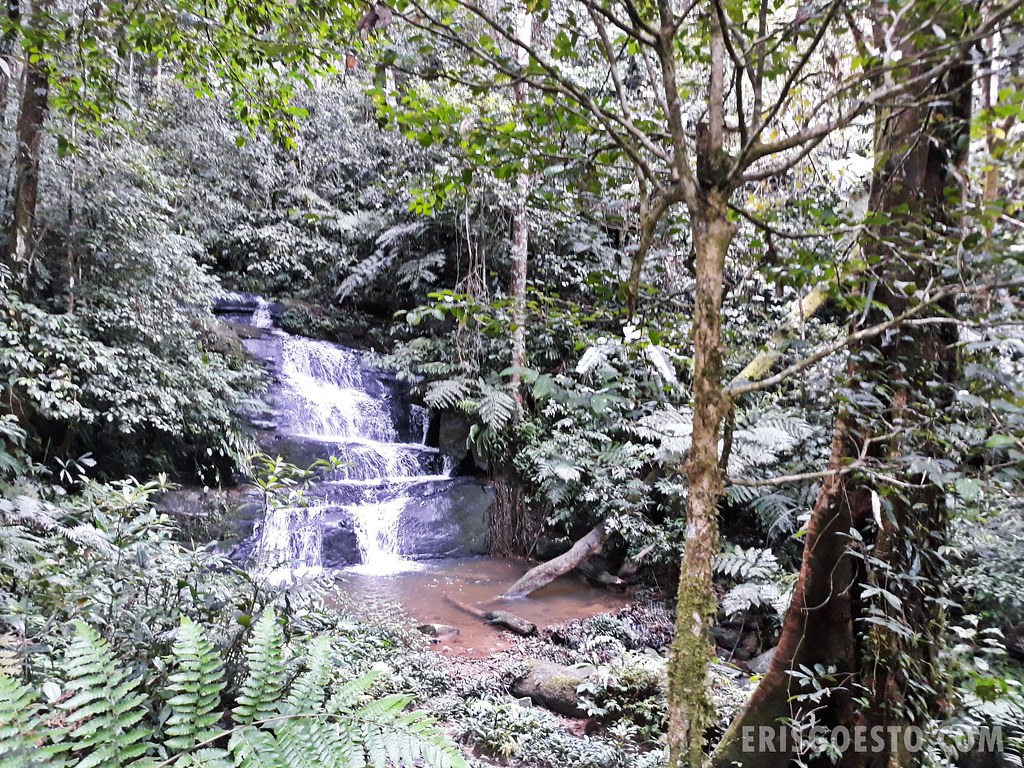 Water was cold and crystal clear! 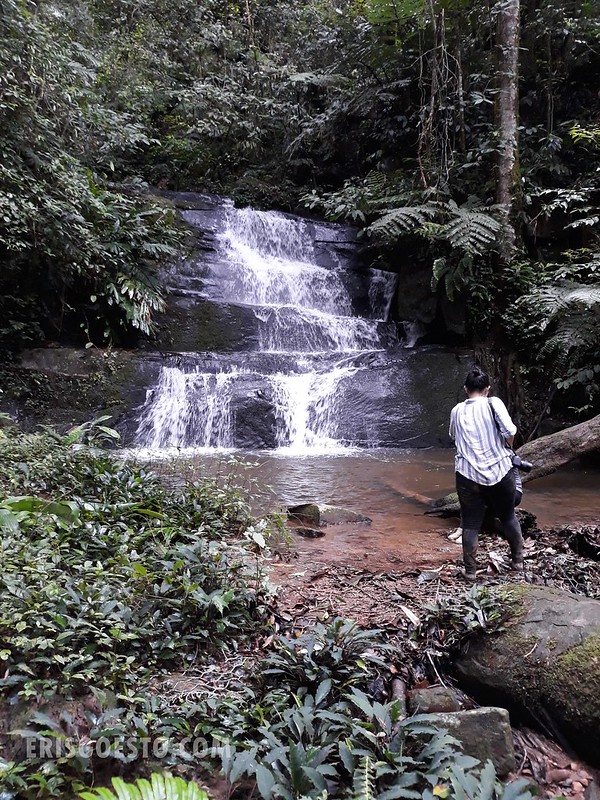 Then it was back to the jungle again. We were making very slow progress, and debated whether to continue the trek to the Eco Shelter or to turn back. Even some of the more experienced trekkers among us said the trail was ‘difficult’, so I knew it wasn’t only me being a newbie/pansy: it really WAS tough.

I was already tired then, having trekked for seven hours. But since everyone decided to push on, we pushed on. Around 4 pm, the EcoShelter finally loomed into view. 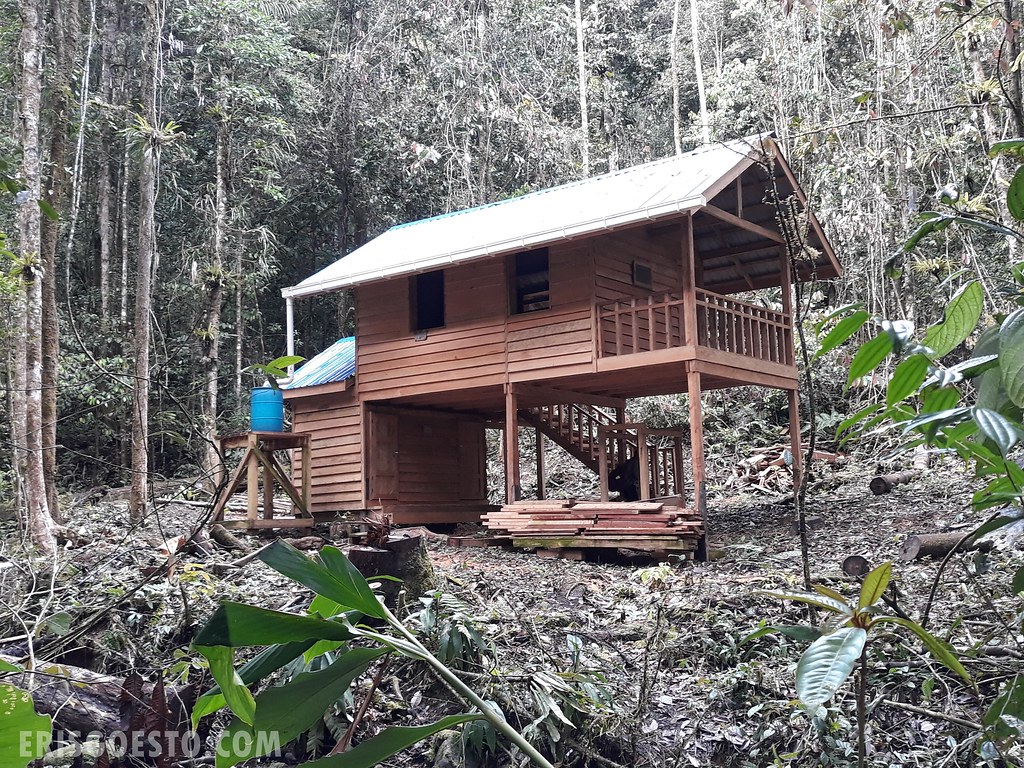 Funded by Volvo Malaysia and built by the local Kelabit villagers with the help of the nomadic Penan tribe who live in the region, the wooden shelters are basic, with a simple toilet/shower that uses a rainwater harvesting system. There are five shelters in total, spaced 5km apart. The idea was to provide a place for ecotourists and locals heading up the ancestral trail with a place to rest, since the entire trip would take days. 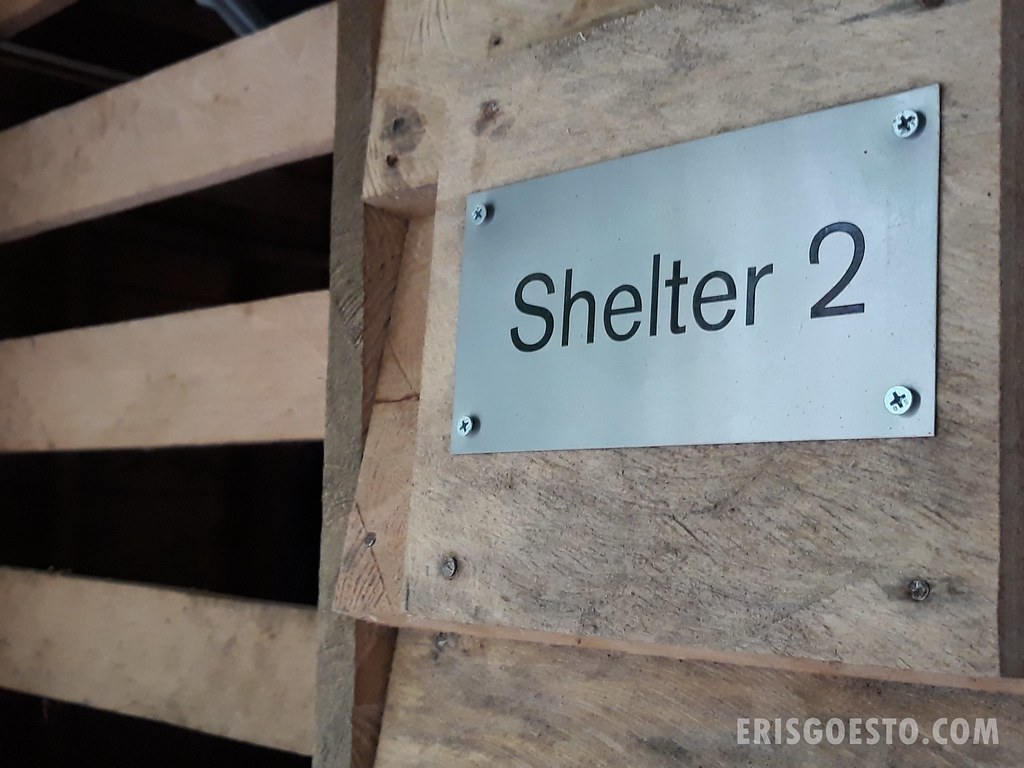 We actually headed to Shelter 2 instead of 1 because we were moving very slowly and this was closer. Went inside, stripped, and asked the ladies to help me check for leeches. I was horrified to find one had crawled very close to my hoo-ha. It had fallen off, but it was so close my underwear was soaked with blood, as if I had my period. .___.”

Gave me nightmares for days 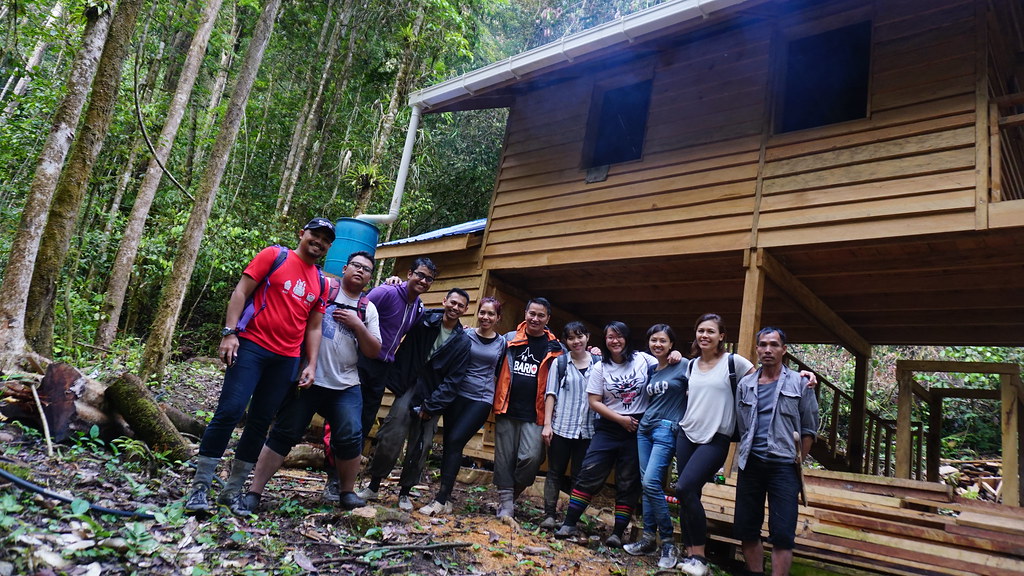 Group photo ! We didn’t rest for too long because night was approaching and we had to exit quickly. At this point, I was still feeling okay, but about an hour into the return trip, exhaustion crept in. 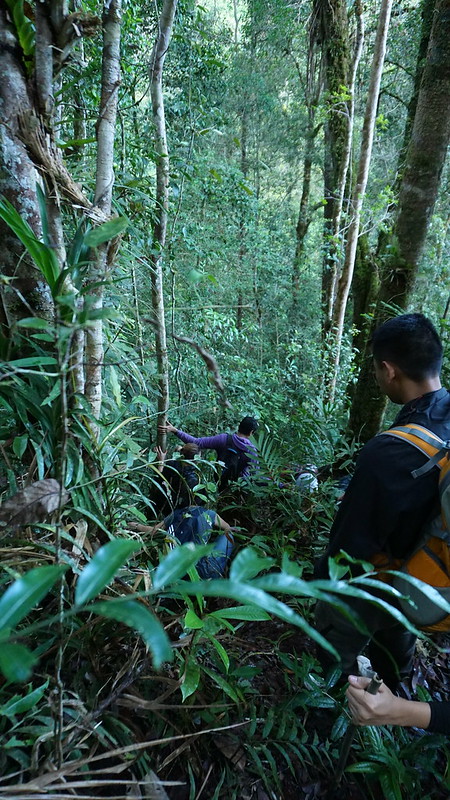 The way was mostly downhill, and my legs were so tired they didn’t seem to want to listen to me and started shaking. It was extremely frustrating – if you’ve ever had a body part not listen to what your brain tells it to do, you’ll know what I mean. It didn’t help that I hadn’t had any training or even experience hiking, so it was like going from 0-100. I ended up stopping, sitting down on the ground and bursting into tears. The rest of the group were very patient and encouraging: since my body was overheating, they fanned me and gave me water, while Julian, the guide, held my hands throughout the return journey.

The tight shoes were pinching my toes – it hurt every step of the way and I was wheezing like a stuck pig, but when you’re at that point, you give up caring about how you look lol. I asked Julian what would happen if I really couldn’t walk anymore and he said he’d have to carry me out. I thought about it and decided I’d just press on, mostly coz I’m as heavy as a man and he’d have a hard time carrying + guiding the others (although we did have a backup guide, Agan, walking at the back).

I did an interview with South African explorer Mike Horn a couple of months back, and he quoted something about his solo trip across the Antarctica (the first man to do so without a team): when his ship left him at the shores and he was faced with the next 5,000km to cross, he knew that the only way to get out alive would be to reach the other side. That crossed my mind as I sat bawling on the forest floor of a Sarawak jungle. Of course, I didn’t believe I was going to die, but I didn’t want to be stuck overnight in a forest and I knew there was no way out but forward, so I forced the legs to move one step at a time, one foot in front of the other. 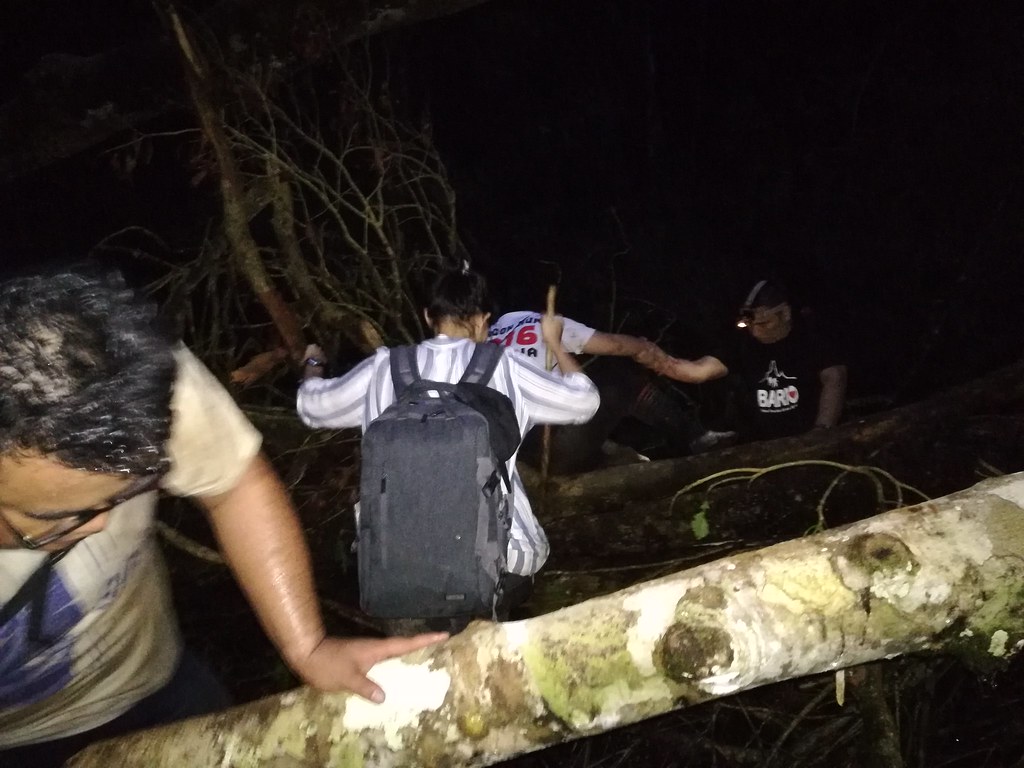 I spent most of the last three hours slipping and sliding rather than walking, because my legs simply did not want to listen to my brain anymore.

After what felt like forever, we finally arrived at a cow paddock on the edge of the jungle, where our guides radioed for a truck. What was supposed to be a five hour in-and-out trip took us a solid 11 HOURS. 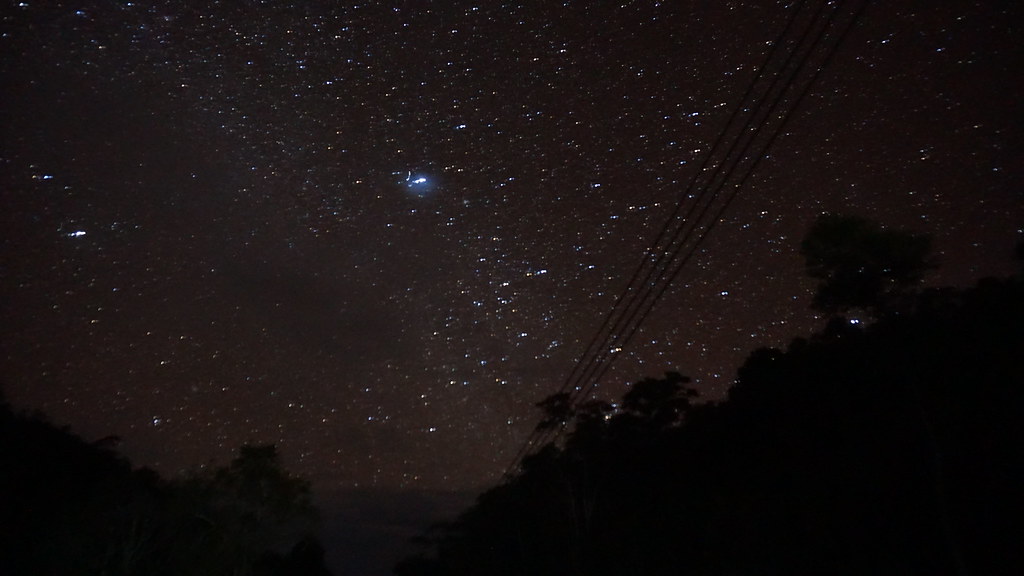 While waiting, I looked up and was greeted by an amazing sight: a beautiful night sky strewn with stars, like diamond dust in an ink pool. Definitely not something you’ll see in the city! The view took my breath away (or maybe it was the exhaustion? lol) and I realised what I had accomplished. Unfit chick with no hiking experience (or much sporting experience, for that matter), conquered a hardcore trail that even experienced hikers called tough. If that’s not something to tell the grandkids, I don’t know what is.

Course, I don’t think I’d be in a hurry to do this again anytime soon (or ever?) lol.

When the truck pulled up to the long house, we were fussed over (and mildly scolded)  because they were worried and had sent some of the villagers after us, fearing that someone had been injured. My advice for tourists: don’t pull an Eris and go with zero training and without the proper equipment – this is no Broga Hill. Seriously. This is some hardcore sht.

But man, was it unforgettable.

PS: A testament to my un-athletic-ness (is that a word?) – both my toenails got infected because of the blunt trauma/force from the shoes. The left one leaked pus, the other turned black and had a pool of blood under the nail lol. After some meds the left one seemed okay, but today the entire nail bed came out fahk. So now I have no toenail on my big toe wtf. I guess it’ll take a few months to grow it out again. I hope the right one doesn’t fall off too lol.

6 thoughts on “Travelogue Borneo: Hardcore Hiking in Bario – 11 Hours In A Sarawak Jungle”