If I could choose only one food item to eat for the rest of my life, it’d probably be chicken wings. For me, three things make for good chicken wings: crunch, tenderness and flavour. If they’re buffalo or Korean-style, then the sauce plays an important part too. 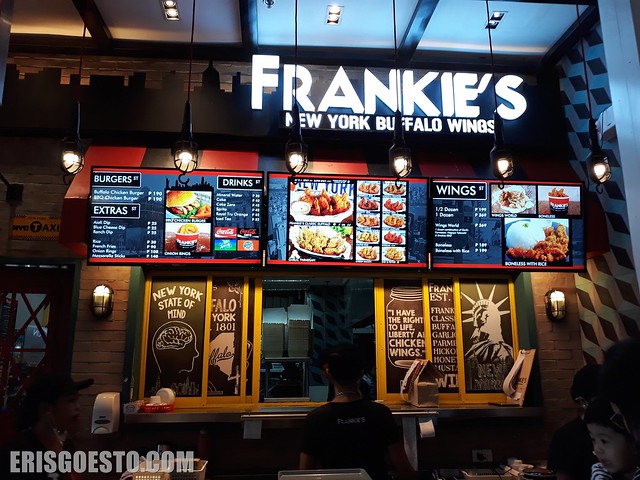 N and I were at SM Aura in Taguig recently for his birthday celebration. He wanted to starve until dinner so we could eat more at the buffet (lol) but by 3PM I was already too hungry, having skipped lunch. We ended up at the food court for ‘snacks’, but when I saw a wings shop – Frankie’s New York Buffalo Wings – I made a beeline for it. Judging from the queue, even at mid-afternoon, it was pretty popular.

There’s quite a selection on their menu, with up to 13 types of seasoning/sauces. The original is always the best, so we ordered half a dozen buffalo wings. It came with a creamy ranch dip, which was fatty but oh-so-good. The wings were awesome. The skin gave off a loud crunch with every bite, revealing the tender juiciness within, smoke still rising from the heat. Although it was greasy, I didn’t feel like I had to puke afterwards. The savoury coat had an appetising sour tang to it that was perfect with creamy ranch. Idk about you, but I usually prefer my wings with the bones in, coz then you’d get to really gnaw on them and get every single bit out.

Verdict? One of my favourite wings, not just in Manila, but that I’ve had so far! Granted, I haven’t had many buffalo-style chicken wings – Korean-style is more popular in Malaysia – but it’s still a great one nonetheless. They also have a branch in SM Megamall and restaurants at UP Town Centre, BGC and SM North Edsa.

Prices start from PHP199 for half a dozen wings.