Food trends come and go, but when it comes to dessert, I think nothing beats a good ol’-fashioned cake and waffle combo. If you’re in the Petaling Jaya neighbourhood, one of the best places to get both is at Fluffed Cafe and Dessert Bar. Sandwiched in the middle of a row of quiet shoplots in Taman Paramount, the cosy nook is pretty popular, judging by the crowd that was there during our visit on a Sunday night. Since it was just S and I, we managed to get a table at the back quick (the cafe seats around 50 people +)

I was pleasantly surprised to find that they have a Birthday Special, where patrons can claim a waffle set either 1 day before, on or 1 day after their birthday, with a minimum purchase of RM40 (it’s a good idea to come with friends!). Since S and I already ordered 1 cake each for ourselves and drinks (which was already RM50), we felt it’d be a shame if we didn’t redeem the waffle. We were going to regret this later but wth.

For drinks, I had the Strawberry Milk, which was refreshing with just the slightest hint of sweetness – it tasted a lot like a strawberry-flavoured yoghurt shake.

PS: Service was super quick: almost as soon as we ordered and looked for a seat, the drinks came wtf we hadn’t even sat down properly yet. But then again we took a really long time ordering so the kitchen probably prepped it while we were still logging orders coz they got fed up with our indecisiveness. lol

S had their signature drink called Maple Story, which is earl grey and maple-infused panna cotta with frozen espresso cubes and cold milk. The panna cotta pudding at the bottom of the glass was smooth and sweet, balancing out the slight bitterness from the espresso which melted when combined with the cold milk.

I saw this Smores Cheesecake in their display glass and it looked so good I couldn’t resist ordering. The chocolate/biscuit base on the inside was solid, complementing the soft, gooey smores coating on the outside. It was a tad too sweet for me though, and it got cloying rather quickly.

S decided to save his tiramisu for home coz we still had a waffle coming. 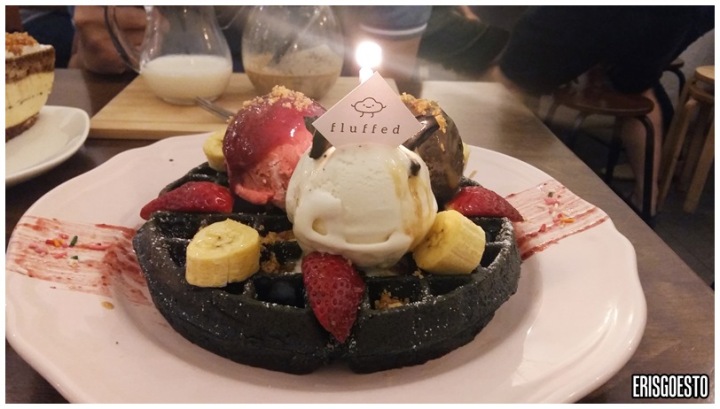 I got to customise my Birthday Waffle! I went for Charcoal Waffle, paired with three scoops of ice cream: their signature Hokey Pokey (vanilla + honey with bits of honeycomb), Black Chocolate and Red Strawberry. The dish was served with slices of banana and strawberry, and they gave me a little candle to boot. 🙂

The waffle was fluffy and crisp, just the right portion for two or three to share. They didn’t skimp on the ice-cream either, which were giant scoops of solid, smooth creaminess. My favourite was the Hokey Pokey, as it was sweet with subtle hints of honey that brought out the vanilla flavour rather than overpower it. Black Chocolate came a close second with its rich, thick and slight hint of bitterness. The Red Strawberry was really sour, which I didn’t like, but S thought it was okay.

We left completely stuffed and satisfied from our food excursion. I’d definitely come here again for my waffle fix if I’m in the neighbourhood! It’s not the best place for chilling though as the place gets crowded and super noisy, you might have to shout at each other to be heard. Service was fast, friendly and efficient.