Ever since the dawn of man, we’ve used all manner of materials to clothe ourselves – from tree bark and fur to flax, cotton and silk. In the early days, perhaps this was more a necessity to protect against the elements; but as human culture and civilization grew, textiles became richer and more detailed: a symbol of wealth and power, or as an important part of religious and social rituals

The National Textile Museum in Kuala Lumpur offers visitors a chance to look at the rich history and awesome art behind the textiles of this region. It’s a great place to check out if you’re ever in the Merdeka Square area.

The museum itself was opened in 2010, but the building’s history dates way back to 1905. Originally built to house the headquarters of the Federated Malay States Railways, it shares the same Indo-Saracenic Revival architecture like the Sultan Abdul Samad Building just across the road. Later, it would house the Selangor Public Works department, the Malaysian Central Bank, Agricultural Bank of Malaysia, Malaysian Craft and High Court.

Entrance to the museum is free. 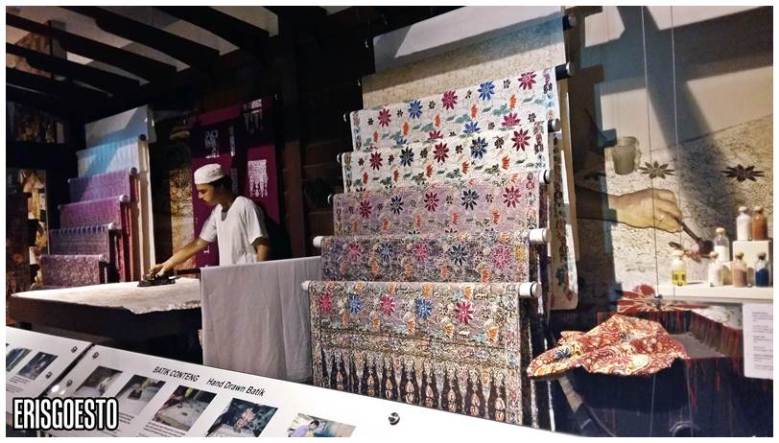 Spanning two floors, the exhibits are divided into several galleries. We start off by checking out the lovely prints, techniques and materials used in the production of Malaysian Batik. Widely considered a national heritage, this unique textile is made by using wax-resist dyeing. The artist will draw patterns with a tool called canting, or print them with a stamp. Since the wax resists dyes, it allows the maker to soak the cloth in one color, remove the wax with boiling water, and then repeating the process until a colourful tapestry is achieved.

‘Stamping’ a cloth with a copper mold in order to achieve a consistent pattern.

Hand-drawn with the canting technique.

Display of silk and cotton threads, looms and sewing tools.

The Straits Chinese of Malacca – Chinese immigrants who assimilated with local Malay culture – have unique textiles of their own that adopt both Malay and Chinese elements. The clothing of the Baba Nyonya are usually elaborate, with loads of embroidery and detailing. 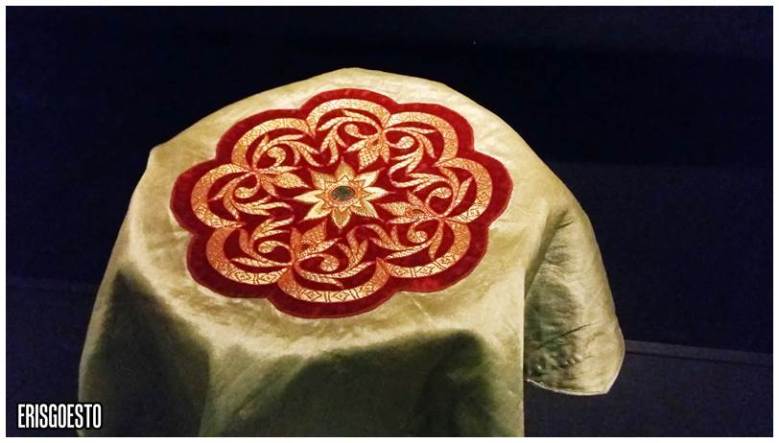 The Tekat Gubah, found within Straits Chinese and Malay communities, is an embroidered piece which uses metal filaments of gold, silver and coloured threads to create designs on the cloth. The base is usually silk or velvet. 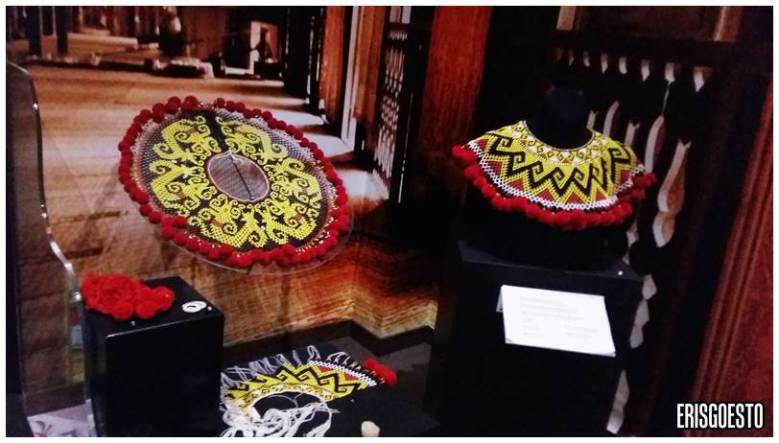 From East Malaysia, a display of the Marek Empang from the Iban tribe – beaded collars worn around the shoulders to form beautiful patterns. These are usually done in white, red, yellow and red, and are part of the Iban traditional costume.

Baju Berayat (Scripted Vest), a silk red vest with inscriptions of Allah on it. Said to provide protection to its wearer.

A section displaying the traditional costumes of the different ethnic groups in Malaysia. 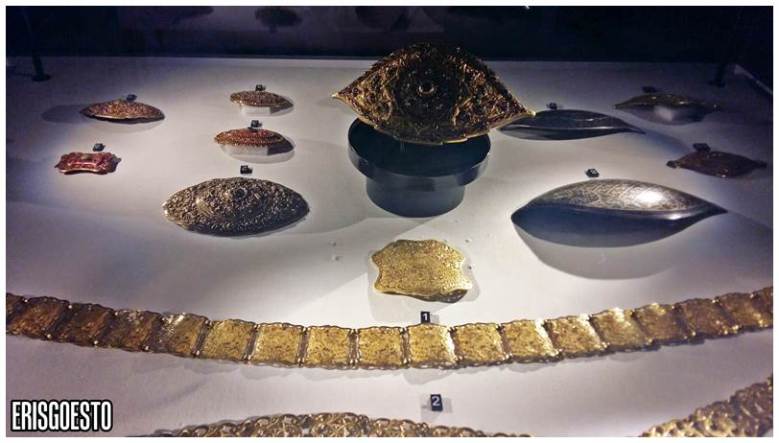 There was also a gallery dedicated to jewellery, accessories and ornaments. One really marvels at the exquisite skill of the craftsmen of old. How did they manage to achieve such a level of detailing without machines?!

A 100-year-old gold modesty disc, worn by Indian girls and made by Indian craftsmen in Penang, circa 1900s. 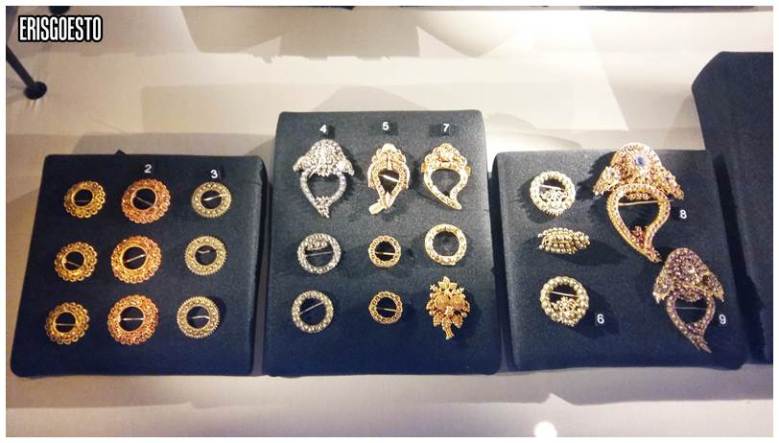 Brooches, pins, rings and other ornaments.

A Taia Bubut necklace, worn by Bidayuh warriors for rituals. The necklace is made from shells, beads, glass and brass bells tied to rattan.

Also on display are weapons such as the Mandau – an Iban sword, complete with sheathe. 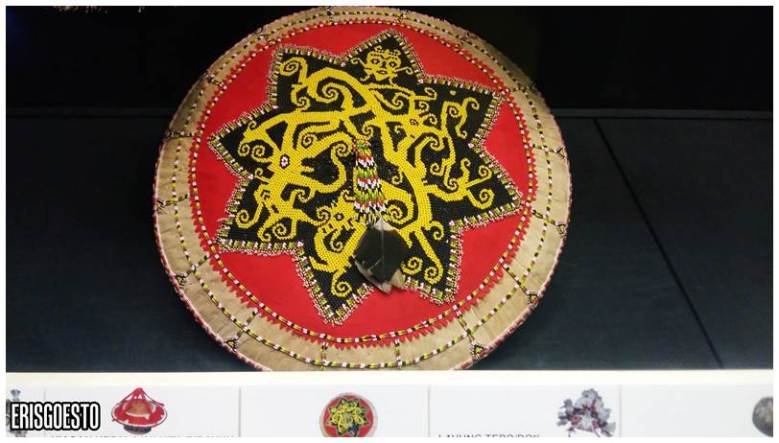 Sa’Ong Inu, a wide hat used by the Orang Ulu for shade. 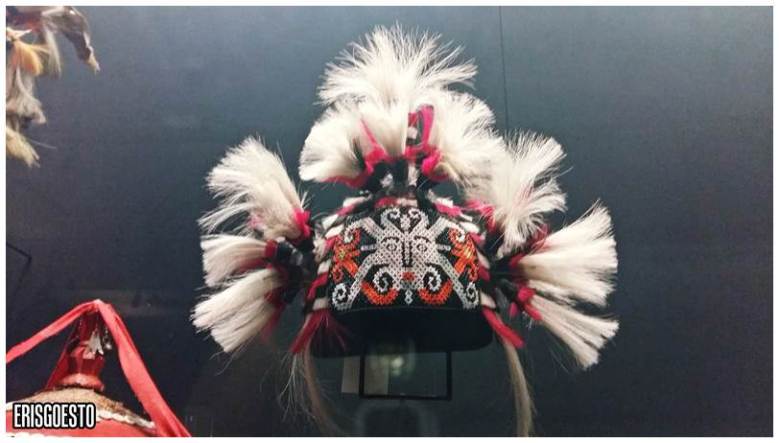 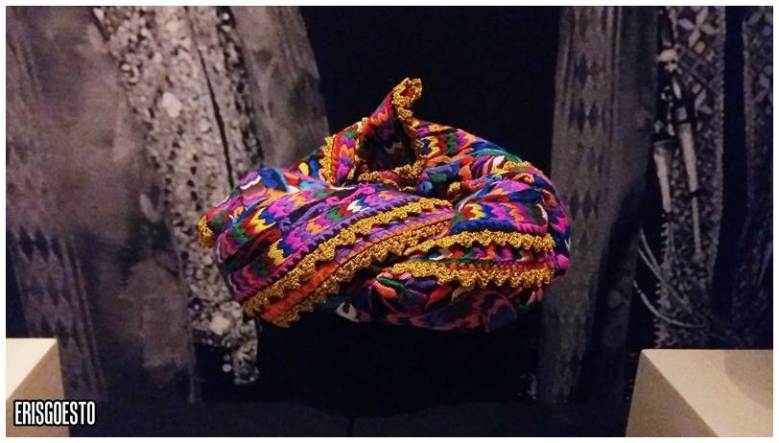 The Malays of old wore the Tengkolok as part of their daily attire. This turban-like headgear differed according to state with a unique way of wrapping it, and they often came in a variety of colours.

The National Textile Museum offers an interesting insight into the country’s culture and history, told through textile. Admission is free, so feel free to pop in if you’re ever in the area. You can also do sightseeing at the nearby Music Museum, Merdeka Square and Sultan Abdul Samad Building. 🙂