Okay, so they’re civet cats and it’s not really poop, but still. Kopi Luwak, or civet coffee, is famous all over the world for its supposedly superior quality and flavor. While I’ve always wanted to try it, they are very expensive in KL (RM60+ for a cup)! But since we’re in Indonesia, where the coffee originated from, it would be a shame to leave without tasting this peculiar coffee.

Our guide brought us to Kopi Luwak Cikole, in the Cikole district of Lembang. This small farm-cum cafe has several civet cats and a home factory where they process the coffee beans into consumer-ready products.

In the wild, civet cats eat coffee cherries as part of their diet. After ingesting, the cherries will ferment along with other food in the animal’s stomach, and come out partially digested. They look kind of like yellow soy beans.

Traditionally, farmers collected the kopi luwak from the wild, but this has since given way to farms. While some farms adopt less-than-savoury practices of force feeding the animals, the one at Cikole seemed decent. The cages were clean, and the animals looked well fed and healthy. There was a ‘cafe’ area where guests can sit and enjoy a cuppa, or browse through the products they have in store. At the back of the farm is a small processing area.

This cage was rather small, but there were bigger enclosures as well.

Our guide explaining to us the process of making Kopi Luwak. As coffee is only part of the civet cat’s diet, they rotate the feeding with other items such as milk, banana, papaya and chicken. This allows the cat’s digestive system to produce enzymes for better tasting Kopi Luwak. 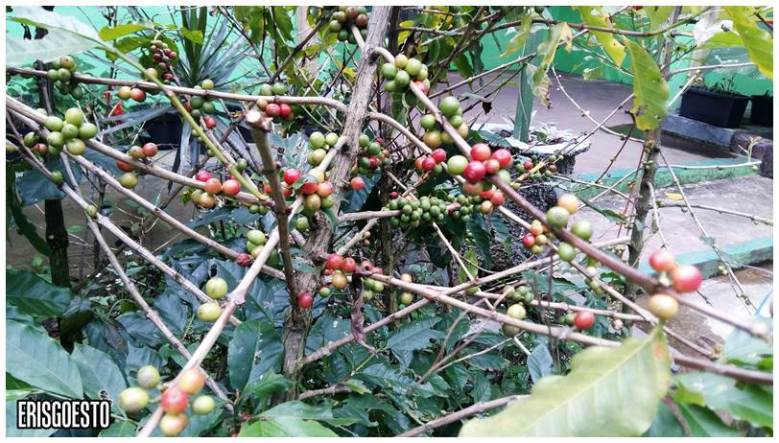 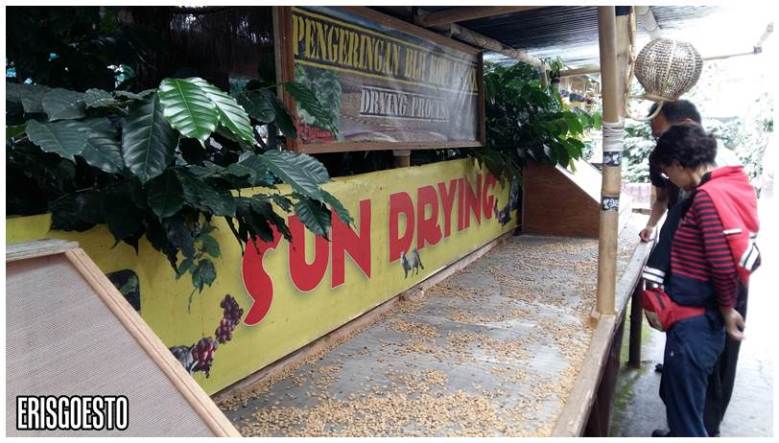 The animals poop out the cherries, and these are collected and sun dried. The end product resembles peanuts.

These will be sorted (there’s a difference in quality produced by male and female civet cats), ground to a powder, and then packaged for sale.

We got two cups to try. In order to get the purest flavour, the server told us not to add sugar or creamer.

I’m not a coffee connoisseur, so I can’t really tell.. but the coffee tasted more like a strong herbal brew. Bitter, with a slight tang to the tongue and a ‘dry’ texture when it goes down your throat. They give you three refills, but it doesn’t dilute the coffee at all.

Apparently the Kopi Luwak has lower caffeine content and can even help with improving one’s health, such as lowering the risk of diabetes, inhibiting inflammation, and a whole host of other benefits.

Dad had another one with ginger.

They also serve snacks! These piping hot banana fritters were fresh out of the wok and balanced the bitter coffee really well.

We didn’t buy any Kopi Luwak because it was way to expensive; but I can now tick one item off my bucket list of things to do. 🙂