The Melaka/Malacca Sultanate was one of the most powerful and wealthy Islamic Malay kingdoms in Southeast Asia, dating back to the early 1400s. It flourished for over a 100 years, establishing trade and diplomatic relations with foreign powers, and received tributes from smaller kingdoms in the region.

Dubbed ‘the Venice of the East’, Malacca’s influence spread far and wide, with traders from Arab, Persia, China, India and even Europe coming to do business. It had a proper government and laws in place (Hukum Kanun Melaka), and arts such as poetry and writing flourished.

Of course, no Asian kingdom could match European conquest and firepower – so it fell to the Portuguese in 1511, and then to the Dutch and English. But it is exactly because of this rich and varied history that has made Malacca a major tourist attraction today.

The Malacca Sultanate Palace Replica is a re-imagination of how the palace would have looked like at the height of the Sultanate’s power, based on historical accounts in the ancient text called Malay Annals. Located at the foot of St Paul’s Hill, this imposing wooden museum was completed without nails, as how the ancients used to build them. Divided into eight chambers and three galleries housing hundreds of old items, visitors pay a small entrance fee of RM3 (locals) to go inside. 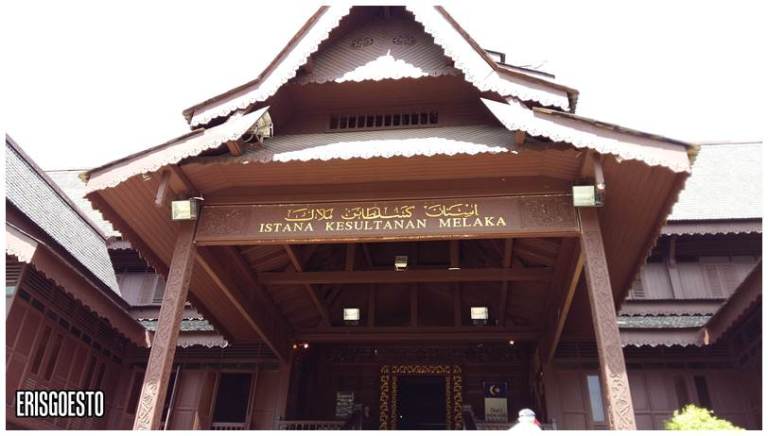 Like many buildings in Malaysia with Islamic influences, patterns and calligraphy dominate the decor and they are carved into the support pillars, along the edges of the windows and on tapestries.

The English on the signages was terrible. It’s like whoever wrote this just threw grammar out the window.

“This porch is used to vivitors come and meet Sultan” …so much fail it wins (?)

Also, I think they haven’t bothered to change this since opening in 1986.

That aside, the museum grounds are well kept and clean. 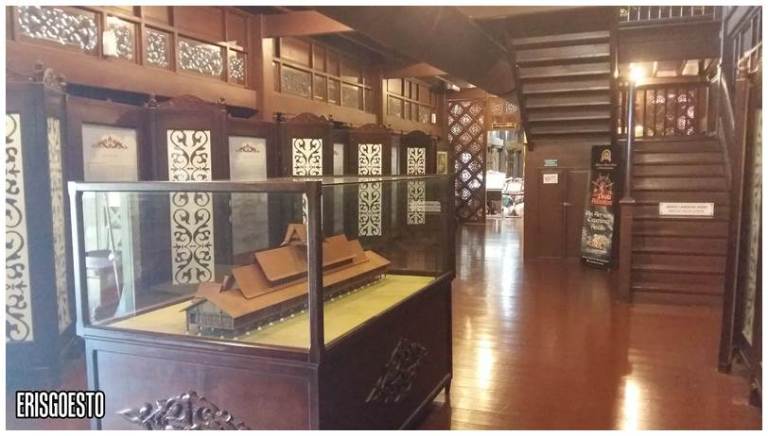 The inside isn’t big, it’s pretty long from one end to the other. The smooth, polished floor is made of Kayu Resak (a type of mangrove hardwood found in Southeast Asia).

An example of the royal ‘throne room’ where the Sultan admitted visitors and foreign delegates.

Ministers with important positions such as the Bendahara (Chief Minister), Temenggung (Police Chief) and Laksamana (Admiral) sat atop the dias, while the sides were lined by nobles/lesser chiefs. Foreign envoys and traders requesting an audience sat on the floor facing the Sultan. Yellow was the royal colour of Malay Sultans which is still used today. 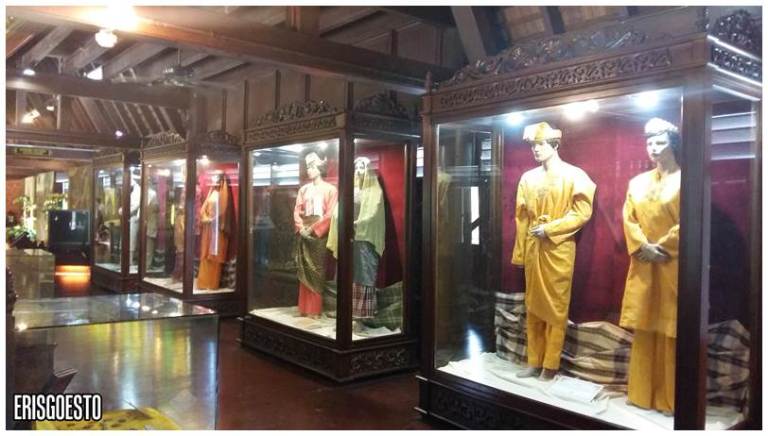 Exhibits of clothing worn by the royals. Sultan and the Queen not only wore different coloured clothing from princes, princesses and nobles, but they were also differentiated according to the way they tied their clothes/wore their head gear.

Upstairs on the second floor is a reproduction of the Sultan’s bedroom and antechambers.

A section of the museum is dedicated to the story of Hang Tuah, a legendary Malay warrior and admiral of the Malacca Sultanate during Sultan Mansur Shah’s time. He was known to be fiercely loyal to king and country. Naturally, he was the Sultan’s favourite. Jealous, other ministers plotted to bring him down by spreading rumours that he was seeing a court stewardess. Enraged, the Sultan put him to death.

Realising something amiss, the then Chief Minister, Tun Perak, hid Hang Tuah in a cave to wait things out.

Hearing of the unjust ‘execution’, Hang Tuah’s best friend, Hang Jebat, ran amok at the castle to avenge him. The Sultan was at his wits end as Hang Jebat was one of the best warriors in the country, second only to Hang Tuah.

At the moment of crisis, Hang Tuah returned, and fought Jebat in combat. The latter was defeated and died at the keris of his best friend. Allegiance and loyalty to the ruler was above all else in ancient Malay culture, something embodied in the legend of Hang Tuah.

Was Hang Tuah real? Although accounts of this person were written in the Malay Annals, there is no concrete evidence to support it. Either way, time and the retelling of stories have made him an almost mystical figure in Malay culture.

All in all, it was an educational trip and worth the cheap entry price. The Palace is located in a cluster of attractions so make sure not to miss it.

2 thoughts on “Things To Do At The Melaka Sultanate Palace Museum, Melaka”