Back when I was in uni, I used to go on this social networking site called Stickam, which is kind of like Omegle minus the perverts and with more awesome people. While the online world has its fair share of trolls, I have never since found another site that has forged so many meaningful and lasting friendships with people from all over the world. Some of the Stickam community that I used to be close to have gotten out of touch, but I still chat with many of them. Recently, one of them visited me while she was in Kuala Lumpur over the weekend, and we had a really awesome time.

Meet Livinda, my friend from Bandung, Indonesia whom I have been chatting with for over two years.

There’s always a worry that you might not be able to click with someone coz they act differently online and irl, but we got along just fine. I picked her up from her hotel in Bukit Bintang and we went to Batu Caves in Sentul. It’s not my first time here – I have been coming here over the years for both prayers and later on, as a tourist. If you’re wondering why prayers, my family used to pray to the patron deity here, Lord Murugan, when I was a kid. We really stood out from the crowd, being Chinese and all (Chinese in Malaysia are usually Christian, Taoist or Buddhist) from the sea of Indian-Hindu devotees. 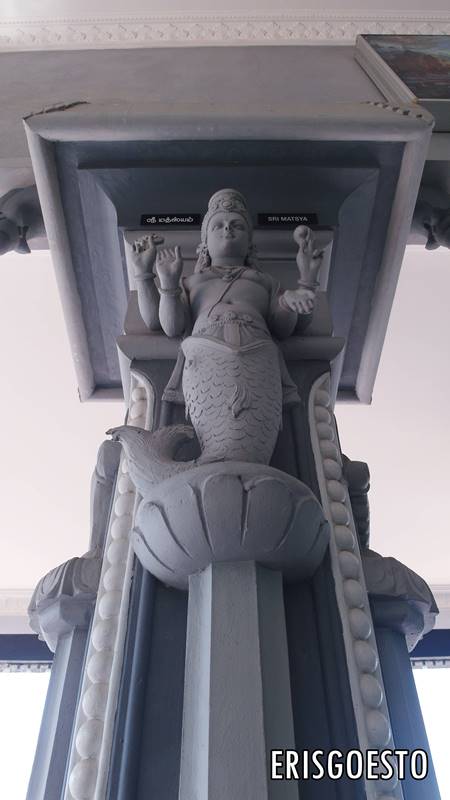 The traffic jam was terrible so we got here later than expected and it was already afternoon. Liv said it was really hot because apparently Bandung is a mountainous region and has temperatures hovering around a cool 25 degrees. How lucky! She also commented that KL looks more similar to Jakarta rather than Bandung. I must pay a visit soon.

Batu Caves is a beautiful cluster of limestone hills housing old Hindu temples dating back to the late 1800s. It is primarily dedicated to Lord Murugan, The Hindu God of War, also known by the names Kartikeya, Skanda and Subryamaniam. The Temple Cave houses the original deity statue, which can be reached by a steep 272 steps climb. As the place developed into a prominent tourist attractions, various other shrines have been added at the foot of the caves, along with a lake and small park area, as well as traders selling trinkets, souvenirs and food mushrooming all along the boulevard. 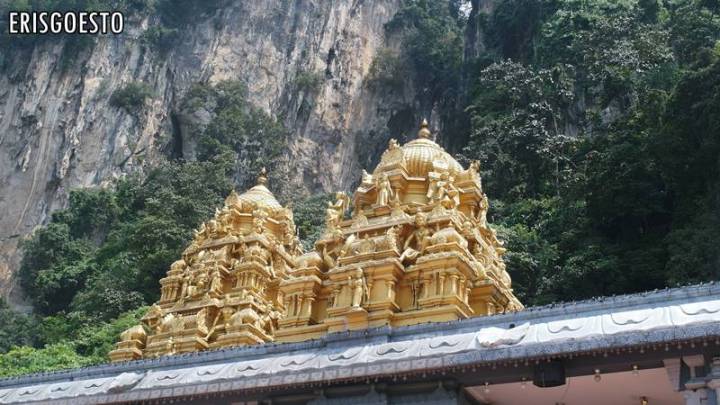 Beautiful gold painted detail on the roof of one of the shrines.

A shrine for Hanuman, the Monkey God. Some old Hindu texts have claimed that Hanuman is a vanara, or ‘forest man’. He appears in many epics such asRamayana and the Mahabharata. 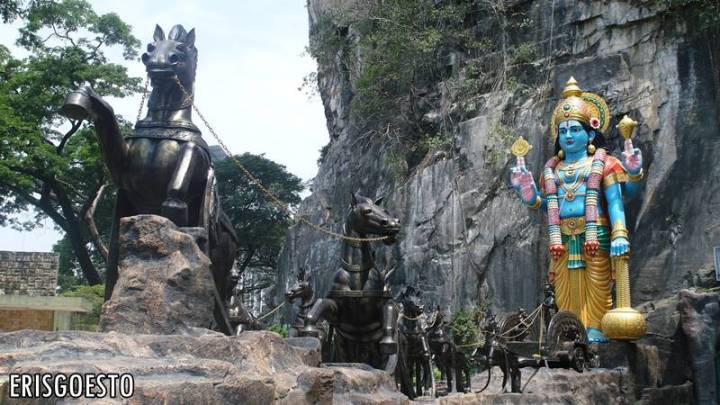 The temple committee has also opened a new section that wasn’t there on my previous visit. We paid a RM2 entry fee to visit the Ramayana caves. A statue of a deity with horses pulling the chariot greets visitors.

The cave itself is impressive. It has statues depicting scenes from the famous Hindu epic, Ramayana. It would be great if they had accompanying placards to tell the story though.. but I think they haven’t installed them yet because the section is quite new. 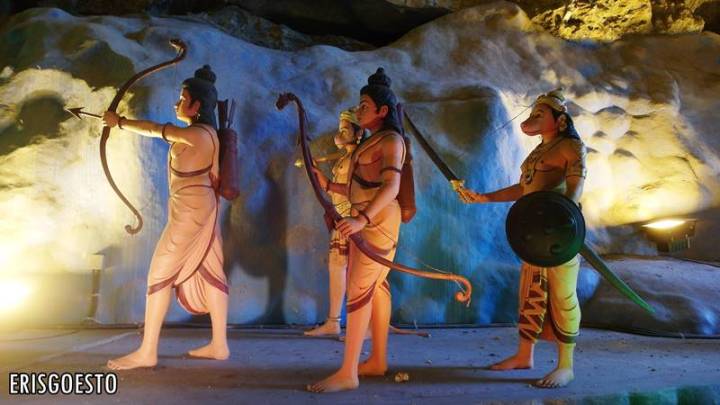 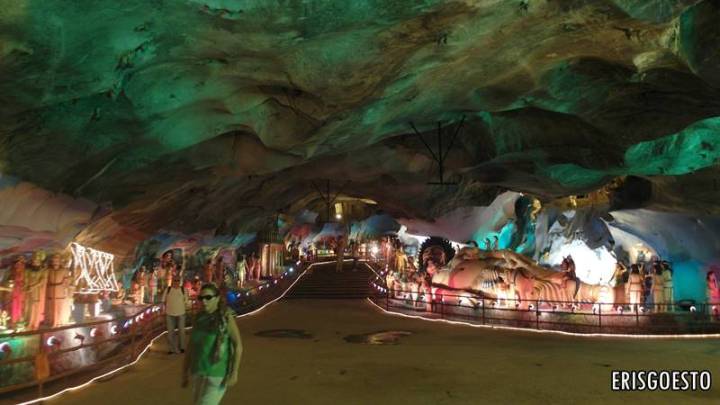 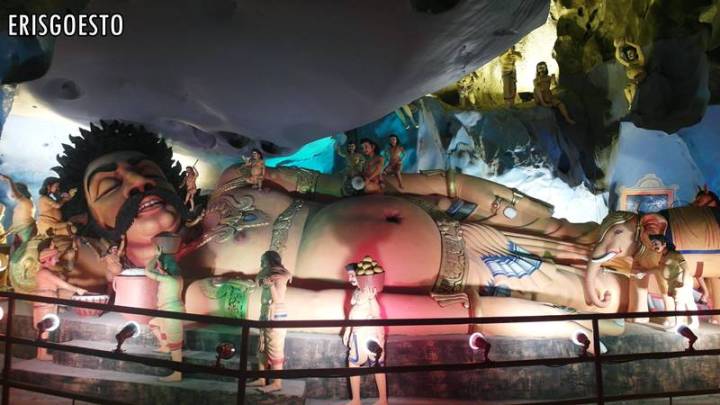 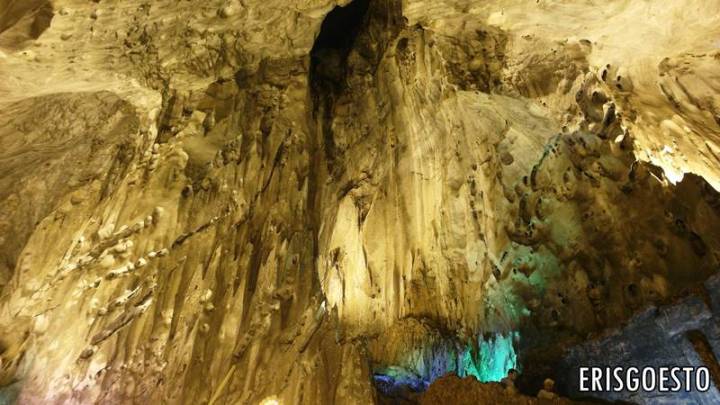 The limestone caves here date back to 400mil years ago and are very beautiful when illuminated by various coloured lights. 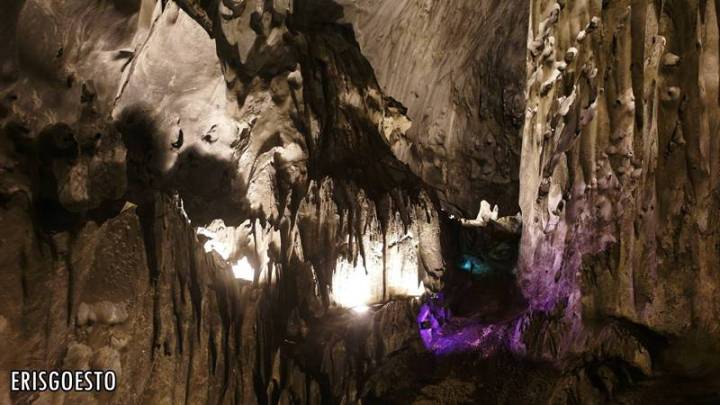 Shops selling everything from clothing to fresh coconuts, crowded with tourists and flocks of pigeons. 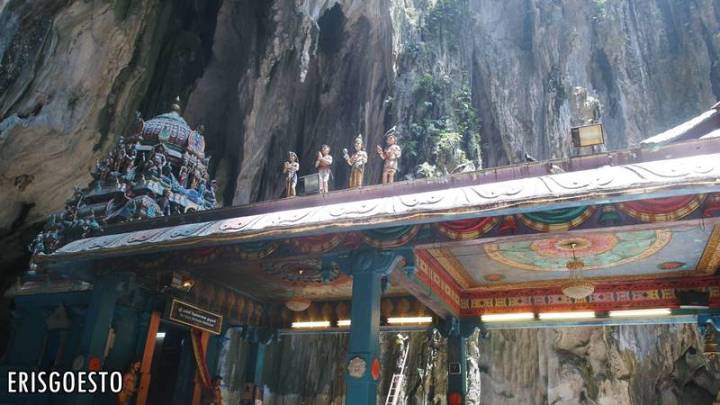 Climbing up the stairs had me wheezing like a burst balloon… but we finally made it! To the first time visitor, be careful with your belongings while making your ascent/descent because there are resident monkeys who won’t think twice about grabbing stuff from you. Also, visitors wearing shorts should cover up with a rented cloth before proceeding to the temple at the top.

Stories have it that the founder of the temples, an Indian trader called K.Thamboosamy Pillai, found the entrance to the caves shaped like a ‘vel’, or spear, which is also what Lord Murugan uses – hence the site of the temple.

To culture geeks, visit during the Thaipusam festival if you’re not afraid of really, really large crowds. Thaipusam is a religious Hindu festival dedicated to Lord Murugan, and it is celebrated with much pomp in Malaysia at Batu Caves, with visitors even travelling from India to experience it. During the event, devotees take part in an eight hour procession from another temple, carrying milk pitchers and colourful kavadis (carriers). The kavadi bearers often pierce themselves with hooks in various parts of the body as a show of devotion and faith, while priests attend to them. The story goes that there is no blood, but I can’t say for sure because I have never been there during the festival.

I think Batu Caves is a beautiful place that is rich in culture, religion, spirituality and natural beauty. So if you’re ever in KL, do pay a visit! You’ll take back lots of knowledge and memories