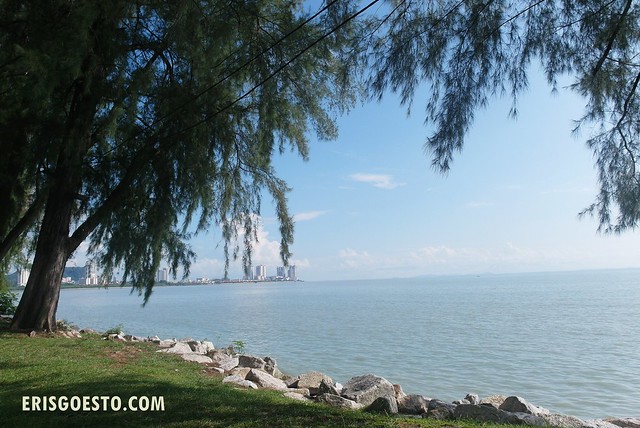 Woke up to an early start on our second last day in Penang. We wanted to make full use of our time to visit as many places as possible, since we won’t be back here for some time. Walked from our hotel to Gurney Drive, which looked scenic in the day. 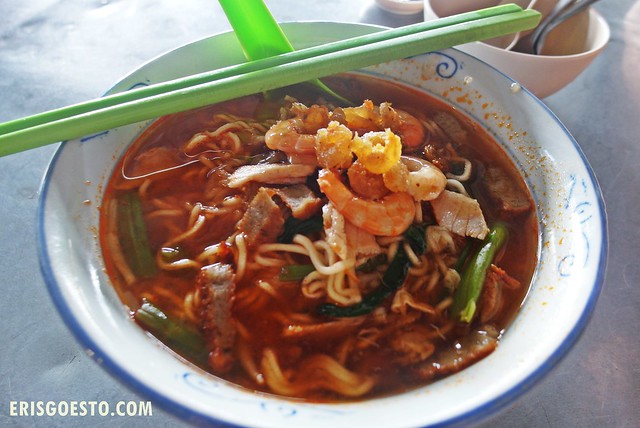 Breakfast at a random roadside stall. E wanted fried noodles (kong nam meen) which was, unfortunately, very hard to find in Penang since it’s a Cantonese specialty. Ended up having Lor bak (deep fried stuff like bean curd stuffed with fish paste, spring rolls, etc) and Har Mee (prawn paste noodles). I didn’t quite like it because the soup was not thick or flavourful enough, but the auntie who cooked it was so nice and friendly. The Lor Bak was RM15 though, which was really pricey. 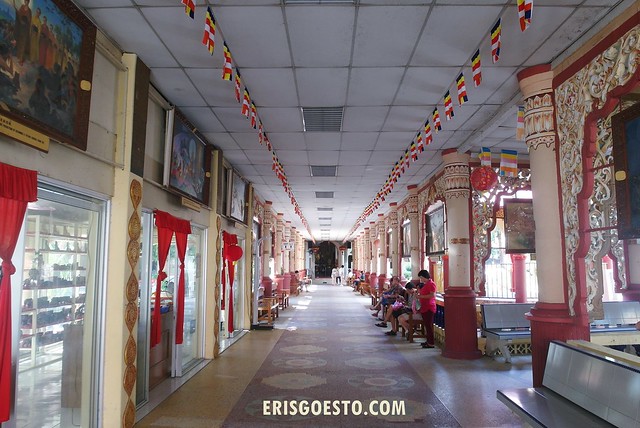 Just adjacent to Gurney Drive is Burmah Lane – home to two large Thai wat (or temples). There are big differences between Chinese Buddhist temples and their Burmese (now Myanmar) counterparts, in terms of architecture and even worship. While many local Chinese temples have been influenced by Taoist elements, which means that there are lots of deities, Thai temples revere the central figure of Buddha more.

The first that we paid a visit to was the Dhammikamara Buddhist temple. The oldest part of the temple is a stupa, which was built in 1805. The main walkways was decorated with gold and red, considered to be good colours, while pictures of Buddha’s journey to enlightenment ran from one side of the passageway, into the hall and then back on the opposite side. 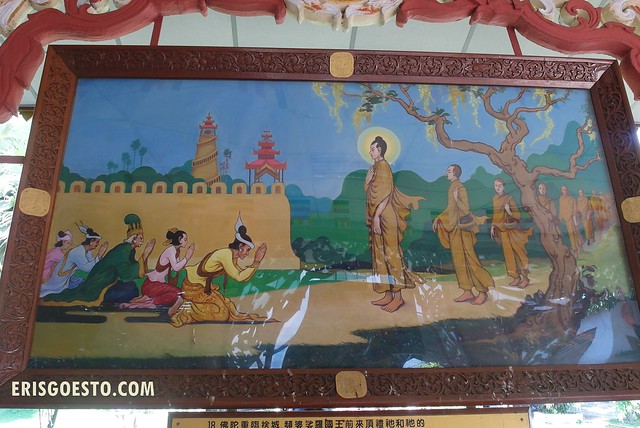 One of the prayer halls, with a gold statue of Buddha and his disciples.

There were a few monks dressed in saffron robes blessing visitors in one corner of the hall. In between waiting, they read English newspapers and chatted among themselves. 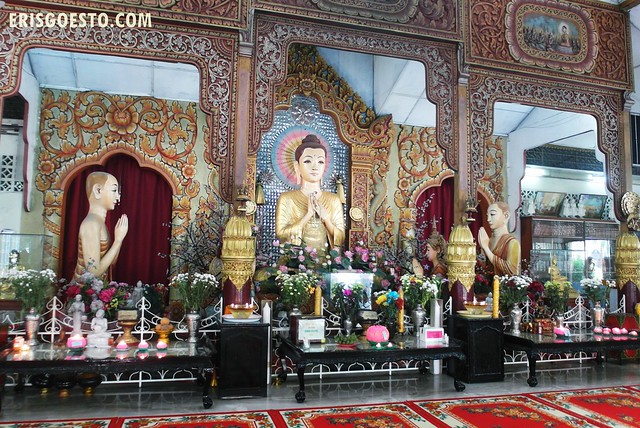 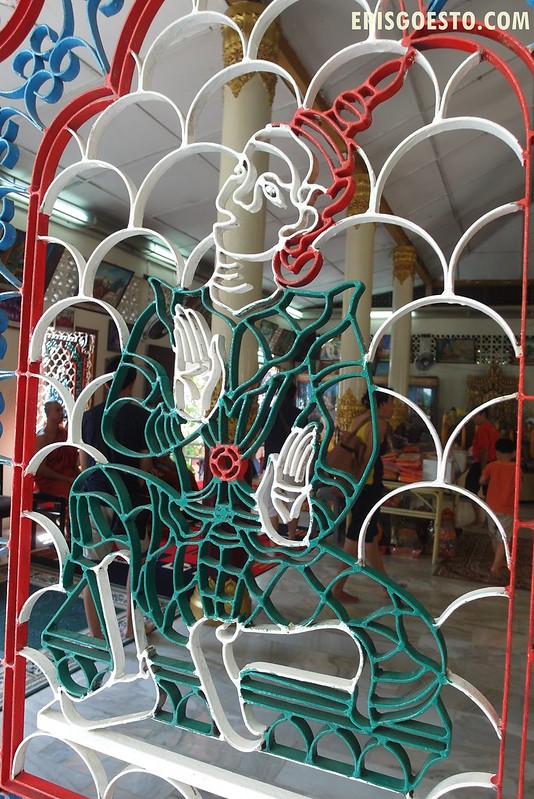 Window motifs, which are distinctively Burmese. 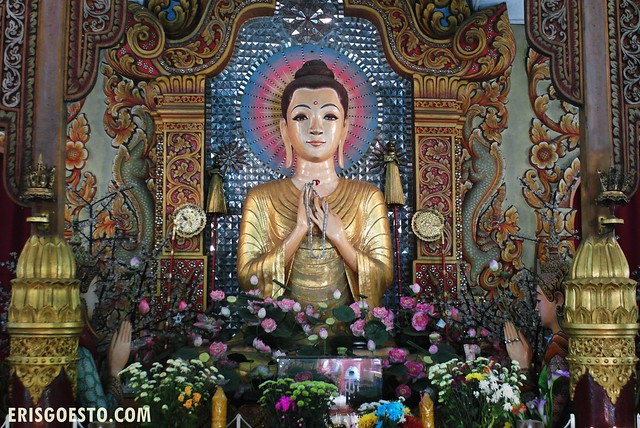 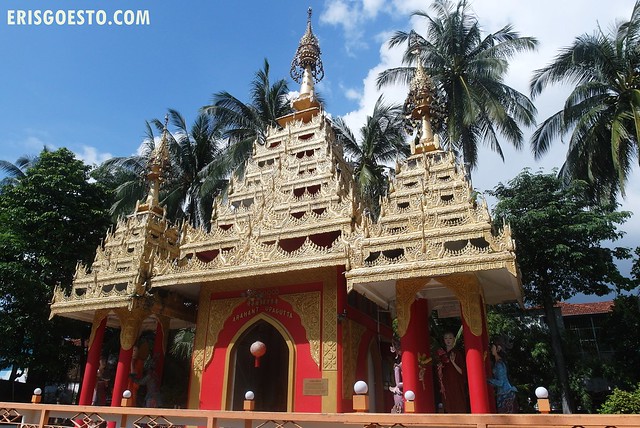 Behind the hall is the Arahant Upagutta pavilion shrine, dating back to 1840. The roof is painted a bright gold (Gold seems to be a favouite colour of the Burmese, while red is more prominent with Chinese) and sits in the middle of a pond, where people can go to release fish or small wildlife. This practice is called ‘fong sang‘ in Chinese and is supposed to help the person gain ‘merits’ for better karma. No offense, but I kind of find it pointless to release fish and birds, because they were caught in the first place just so you could release them.

We also saw figures of the mythical bird, Garuda. Garuda is an intelligent, predatory bird in both Buddhist and Hindu mythology, and is often featured in places like Myanmar, Thailand and Indonesia. (even though Indonesians are primarily Muslim now, Hindu and Buddhist influences were very strong in places like ancient Java and Bali, and the bird has been absorbed into local mythos/ adopted as a national symbol). You don’t see garudas in Chinese Buddhist temples, as they have been replaced by phoenixes, which are more prominent in Chinese culture. 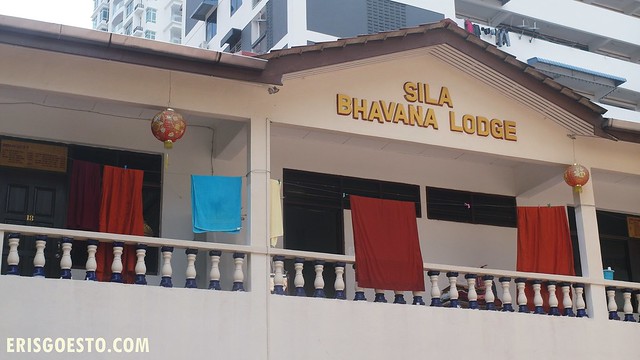 Monks quarters, with their saffron robes blowing in the breeze. 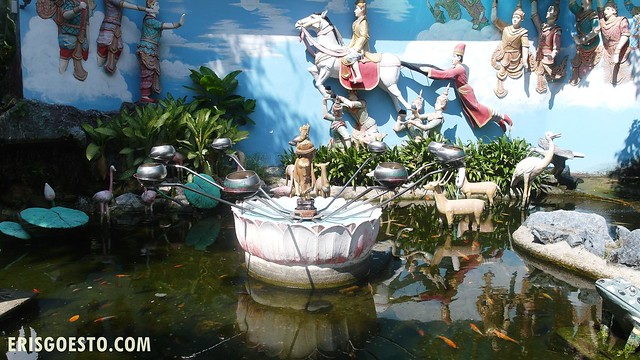 A wishing pond where devotees can throw coins into the silver bowls. 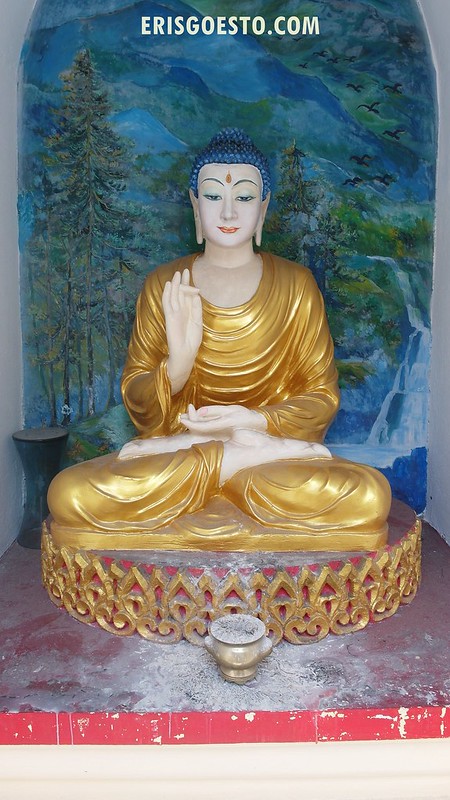 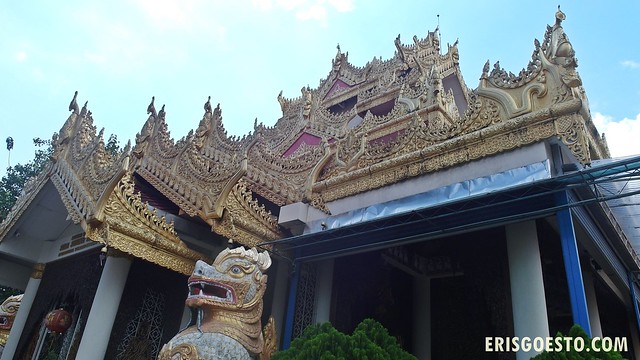 The main shrine, flanked by two Foo Dogs. In South East Asian culture, they are called chinthe. Again, although sharing similar elements with the Chinese ‘kei lun’, the design is distinctively different. The Burmese foo dogs look more dragon-ish, with sharper edges and ‘spiky’ hair; while Chinese ones have rounded hair. It’s like… a German shepherd and a…idk, Rottweiler? Lol. 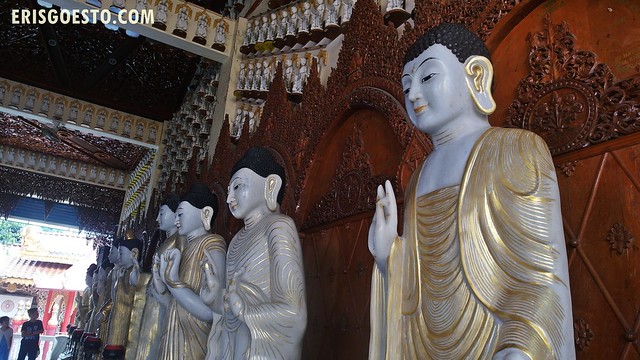 Sitting silently behind are rows of Buddhas from different regions, including Sri Lanka, Afghanistan, Korea, China, Myanmar, Japan, Nepal and many other countries. There are slight differences to their facial features and designs. Some were taller, some had broader faces, some had gentler expressions while some looked stern yet kind at the same time. One has to admire the artisan’s elaborate skills. 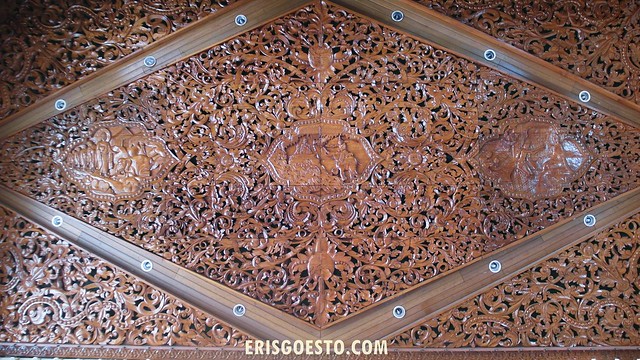 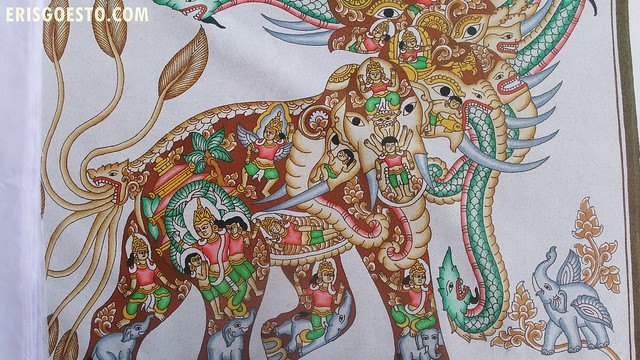 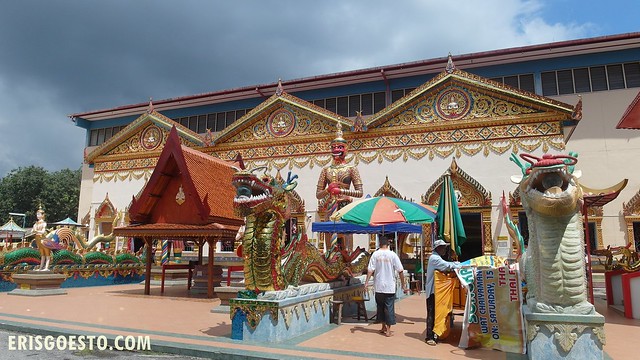 Just across the road from Dhammikamara is the Wat Chayamangkalaram, another Thai Buddhist temple. Built in 1845 when Malaya was still under British rule, the land was given by Queen Victoria as a gesture of goodwill to boost relations with Thailand. Several dragons flank the entrance, as well as demigod statues 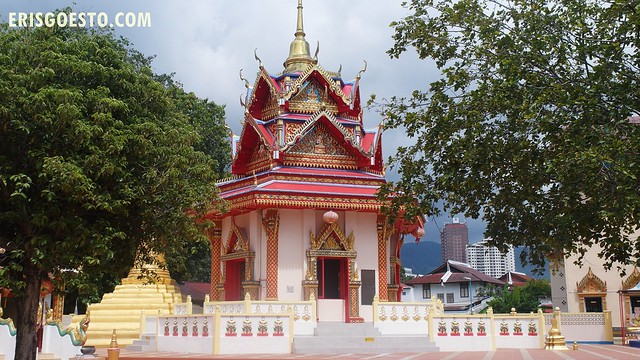 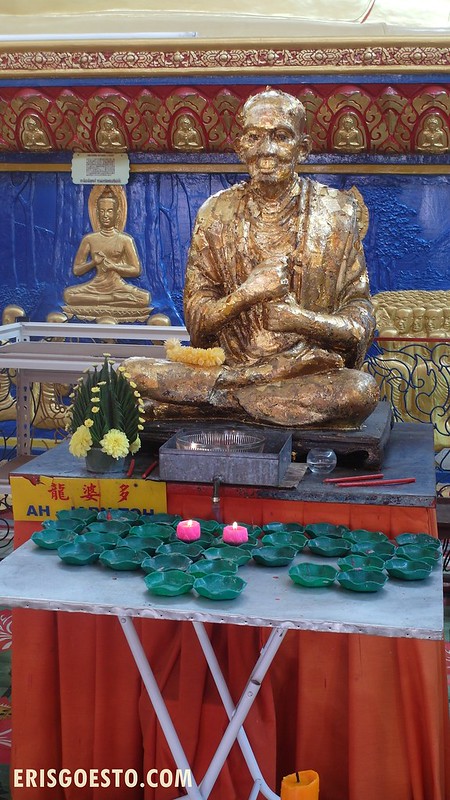 The most popular fixture here is probably the 108ft long Reclining Buddha, called the Phra Chaiya Mongkol which was built in 1958 to commemorate the 2,500th year of Buddha’s birth. It is not merely a statue: underneath and behind the figure is housed hundreds of ashes of the departed in small urns, which family members can pay respects to on anniversaries or religious festivals. 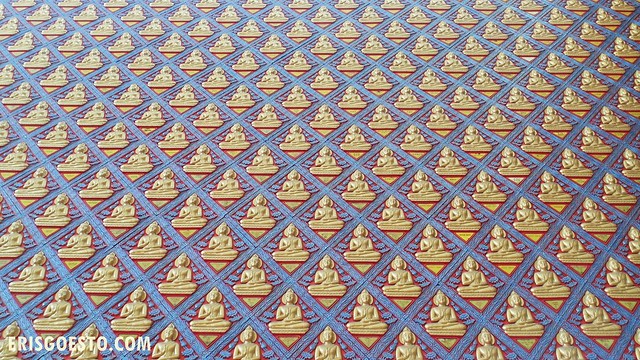 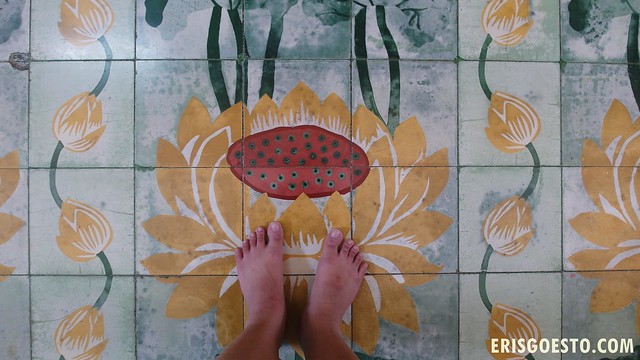 If you love experiencing other cultures and religions, do pay a visit to these adjacent temples when you’re in Penang! It’s definitely an eye-opening experience.