We were supposed to go to the Uluwatu temple after our Padang2 beach excursion, but our guide Toto warned us that there were lots of monkeys and they were known to grab glasses from visitors. (All four of my fam wear spectacles, incidentally.) Mum decided not to go. I was kind of disappointed because I had been really excited to look at Bali’s famous temples. We ended up at GWK Cultural Park instead.

GWK (named after Garuda Wisnu Kencana) is a nice place to visit and well-maintained. The area used to be a limestone quarry which has been turned into a tourist attraction. Upon entry, visitors are greeted by huge statues of various animals seemingly made of copper, such as a rhinoceros, a pouncing tiger, etc.

Entry for all cars requires a fee (they even have a mini toll booth!) and entry for visitors into the park itself cost 400,000 rupiah (for the four of us). A little overpriced, but there were a number of things to explore. It is cheaper for local visitors, and there’s even packages that cover food at the local restaurant.

Elaborately carved statues greet visitors at the entrance to the park.

A wall motif depicting Garuda, a mythical bird-like beast in Hindu and Buddhist culture. Indonesia has long associated the local Javanese eagle as a representation of this bird, and the Garuda is also often used to represent many Indonesian cultural symbols (their football team, their airline, etc.)

We were lucky enough to be in time for a dance performance! Dressed in colourful costumes full of intricate detail, the graceful dancers performed a skit of sorts, with different characters appearing throughout the show. I marvelled at the amount of work their costumes had, and the soft grace the female dancers displayed in each of their movements.

(Left) Rangda – which is said to be an evil, mythical creature with long claws, and (right) is supposed to represent a lion (?) called the Barong, also a mythical beast but representing the good. The body of the lion had to be divided between two performers. 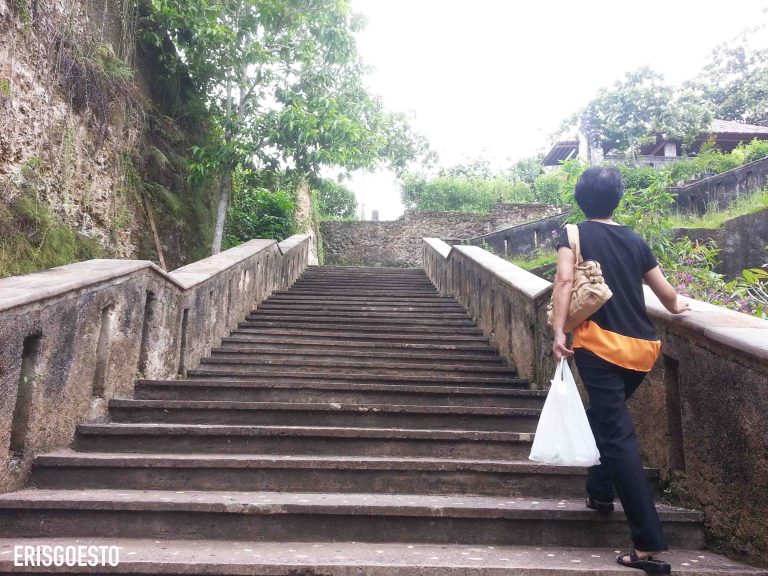 There are three main statues here, namely the above, the 20m high Lord Wisnu statue made of 4,000 tonnes of copper and brass. Nearby is a small spring where visitors can go to get blessed – for a small donation fee, of course.

“The statue of Wisnu is an illustration of the Almighty God in maintaining and caring all life and its being. The god Wisnu is the owner of Amerta in the form of water as the source of fertility , giving wealth and life to the universe.” – GWK website

Part of the Garuda sculpture, sitting at the Plaza Garuda. It is 18ms high.

The Plaza Garuda faces a huge space of carved limestone pillars and nicely manicured gardens. The space can also be converted into a wedding venue.