So it’s Day 2 of my trip to Singapore, and the plan was to meet up with Grace and spend the entire day at Sentosa @ Universal Studios Singapore! Had breakfast at the patio and common kitchen area of the inn, which is nicely decorated with clean stainless steel chairs, potted plants and an open air concept and lots of sunshine. 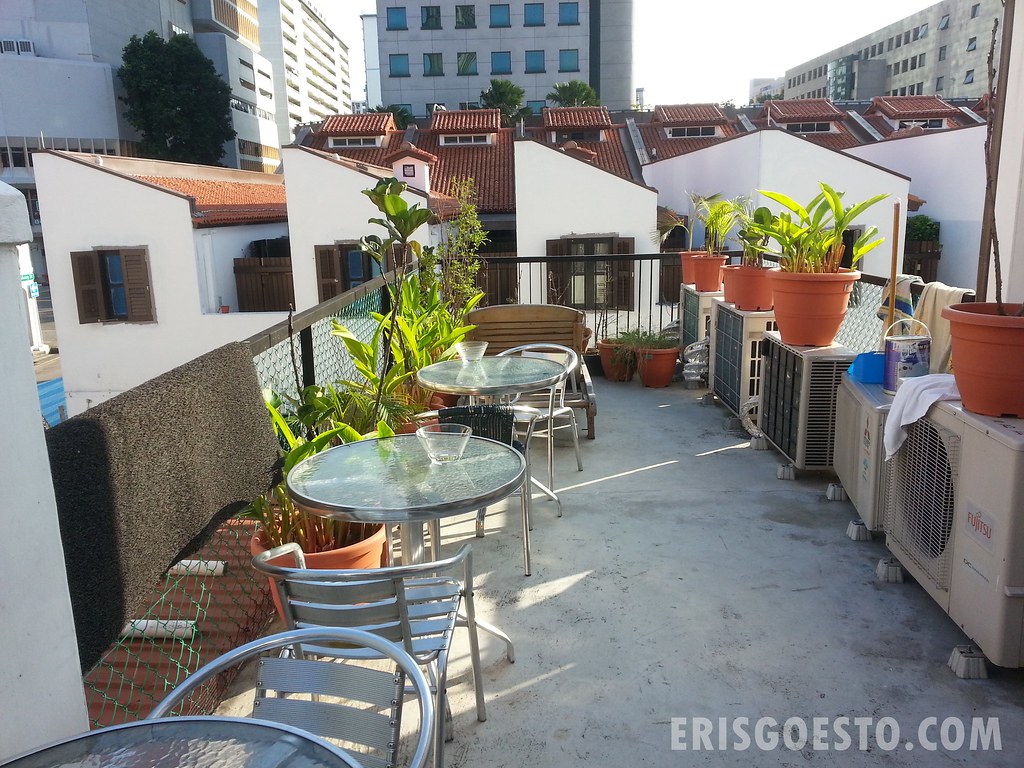 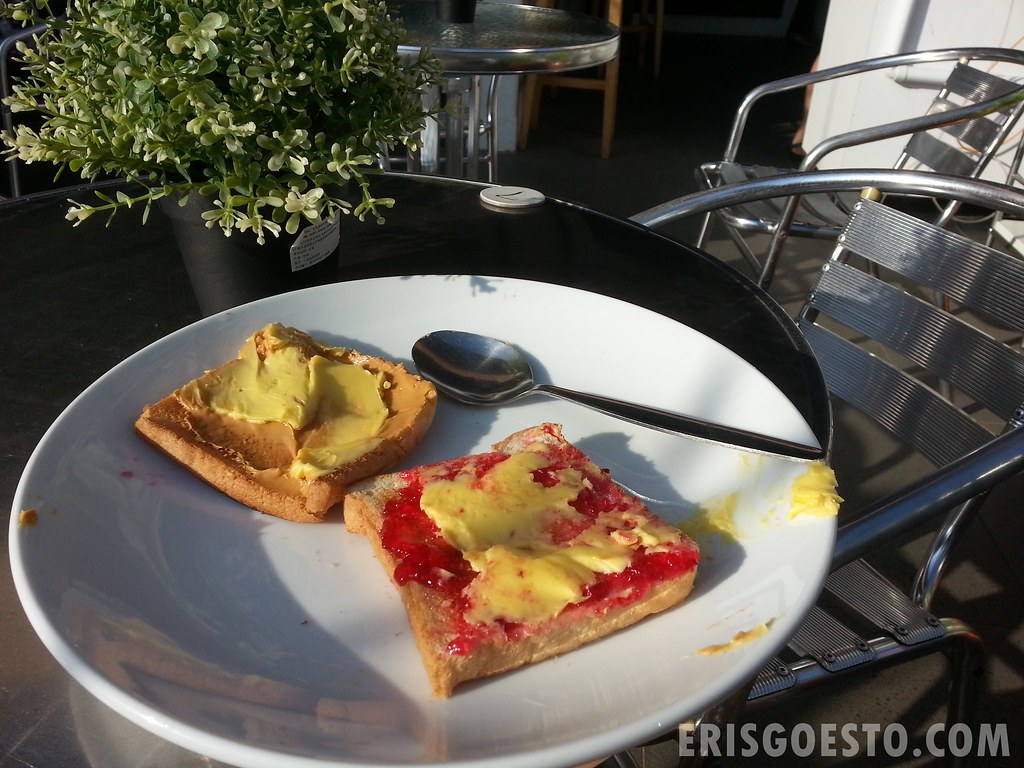 Jaryl came to pick me up at 9 and we walked to the nearby MRT station near Victoria Street. It was a weekday, and lots of people were seen waiting at the bus stops to commute to work. 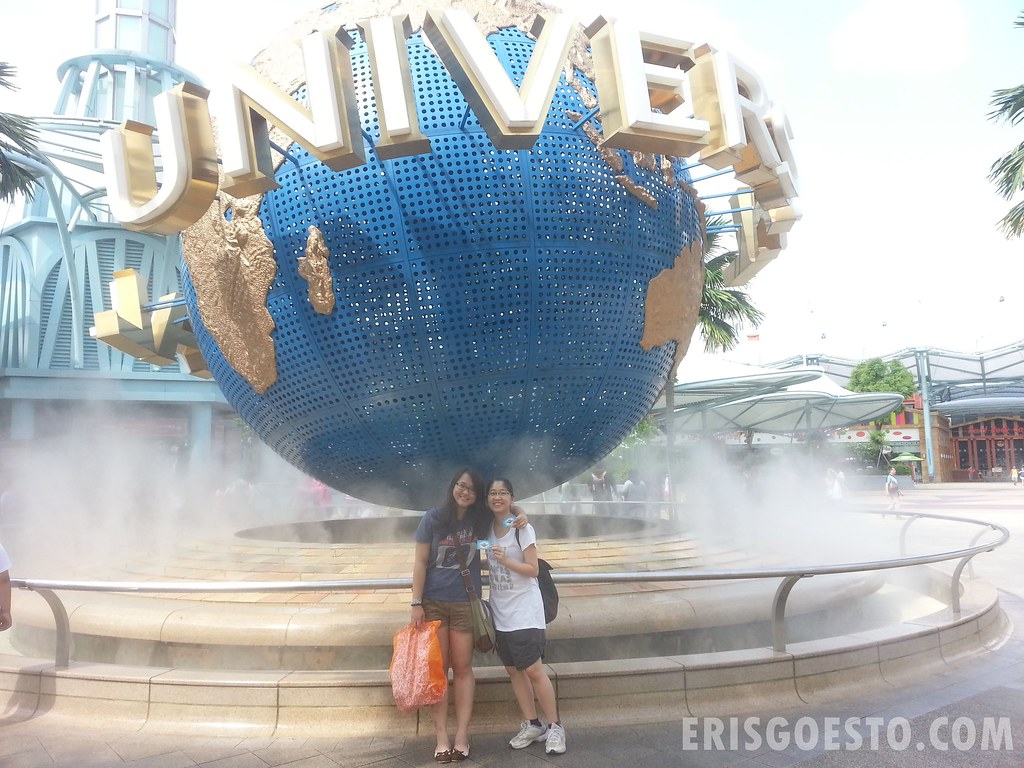 We alighted at the final station and then took a monorail over to the island. Finally able to pose at the iconic Universal Studios revolving globe outside the theme park.This is my first time here. Met up with Grace – she’s lost most of the weight that she gained from giving birth. Since she was a staff, we had discount prices. SGD30 only for two tickets, what a steal! It usually costs SGD70++  for a single ticket. We were hoping that since it was a weekday, there wouldn’t be long queues, but meh, it was the school holidays. 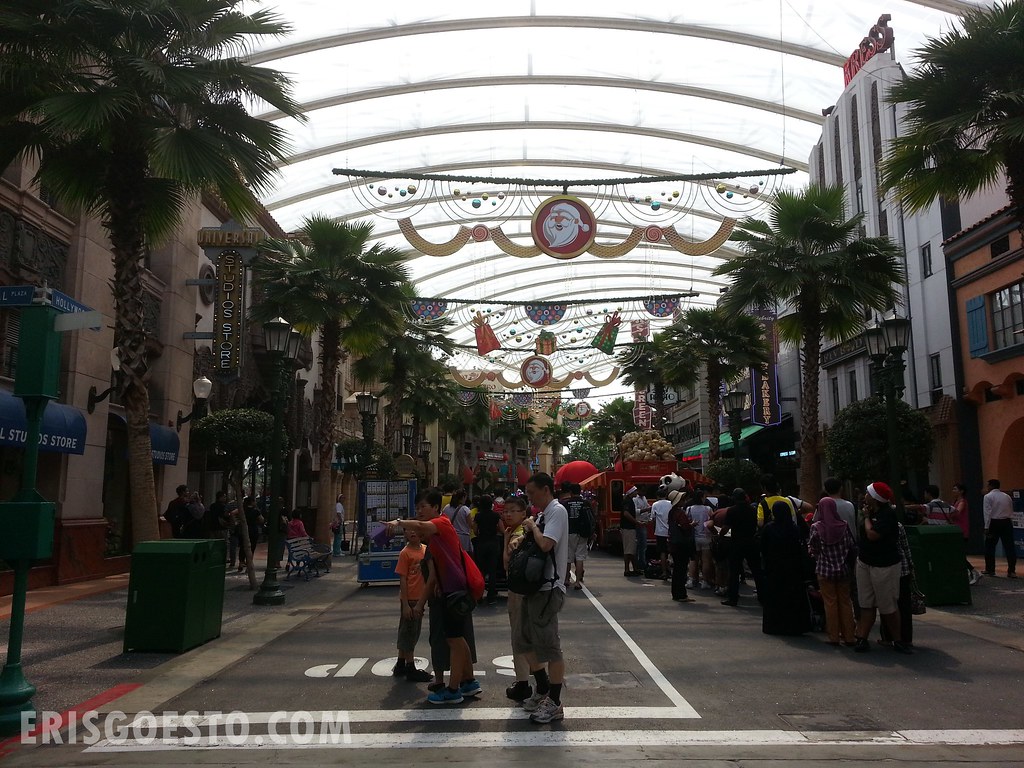 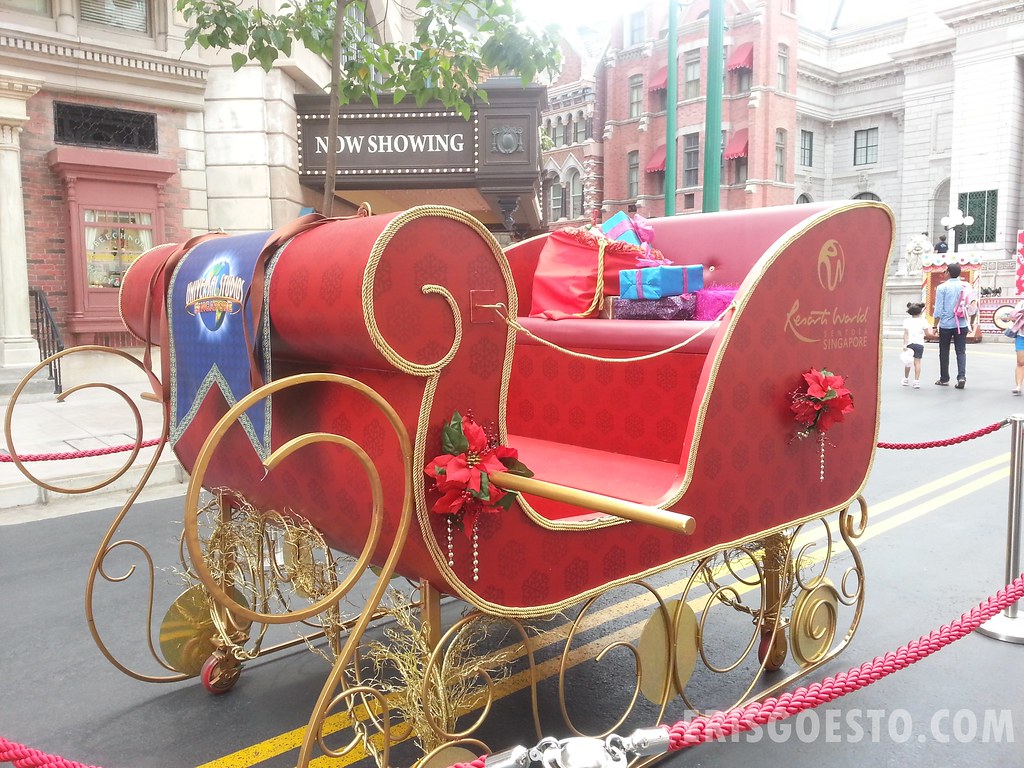 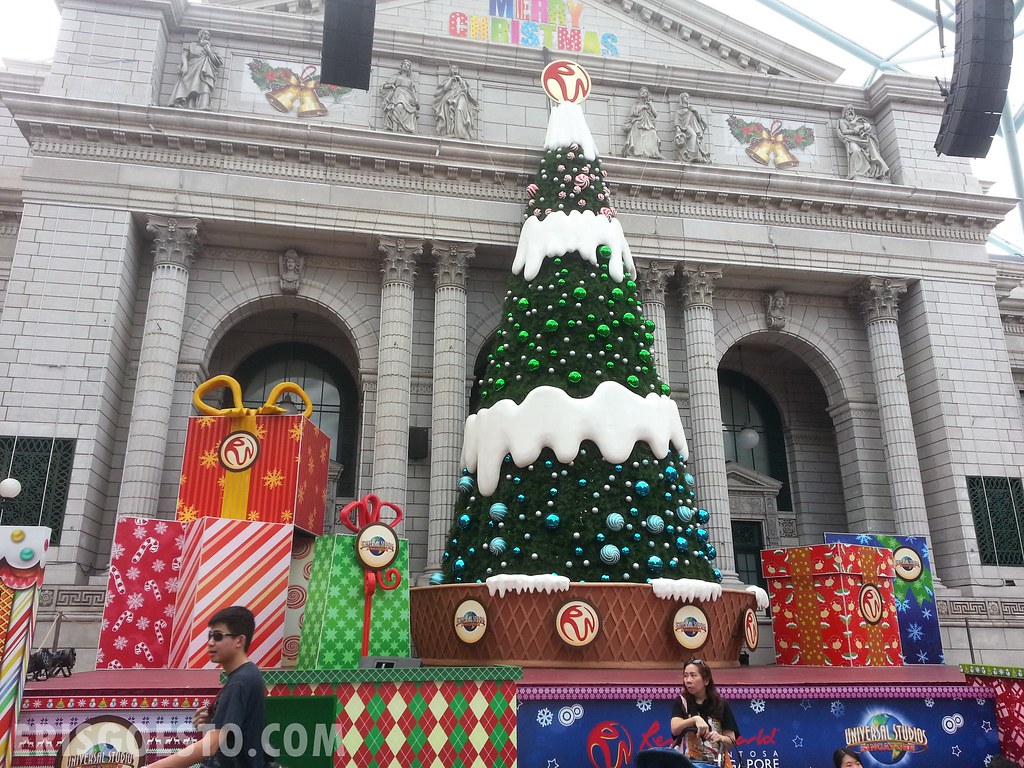 The place was richly decorated for Christmas! Upon entry, we come to the ‘Street’ area, where the entire place resembles a vintage movie set. We also saw a sneak peek of what is to come inside – well-loved characters from movies such as Shrek and TV series like Sesame Street. We were also lucky enough to get an express pass for one ride, after filling up a form by a staff member. 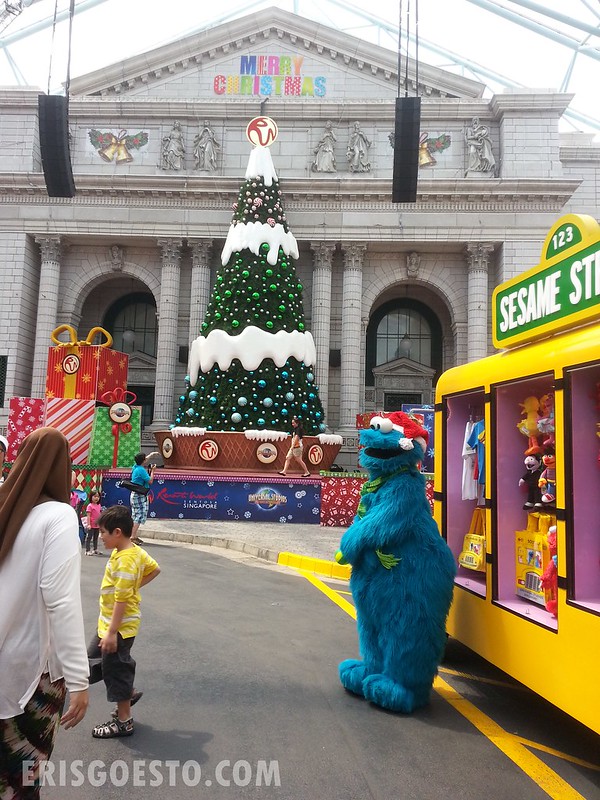 Cookie monster! I never watched Sesame Street much as a kid, but if I had to choose, my fave character would be the Cookie Monster. The suit was really fluffy and soft, but I can’t imagine how the person inside must be suffering… I think the weather was close to 40 degrees celcius. 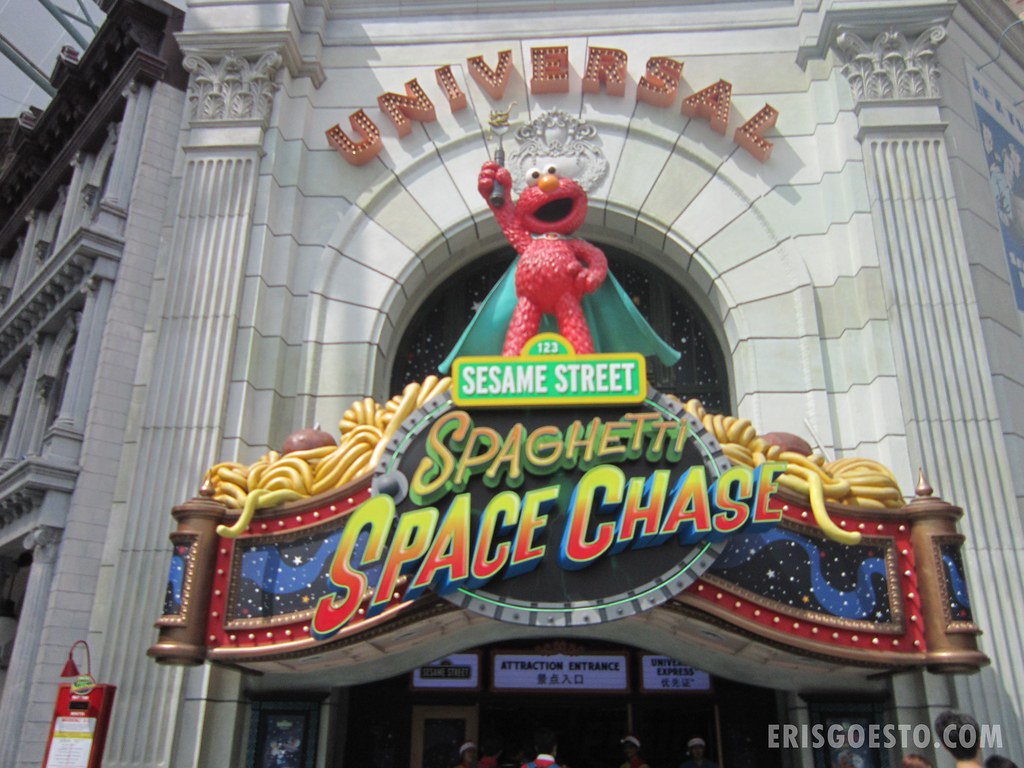 Our first ride was the Sesame Street Spaghetti Space Chase (being kids again.. ;P) which was fun and entertaining. The indoor ride has both 3D and 4D effects, filled with colourful lighting effects in the dark to make it look like space. I was quite surprised when I got a squirt of water at some points during the ride, and reasonably impressed with the standards of the mechatronics compared to theme parks in Malaysia, lol. 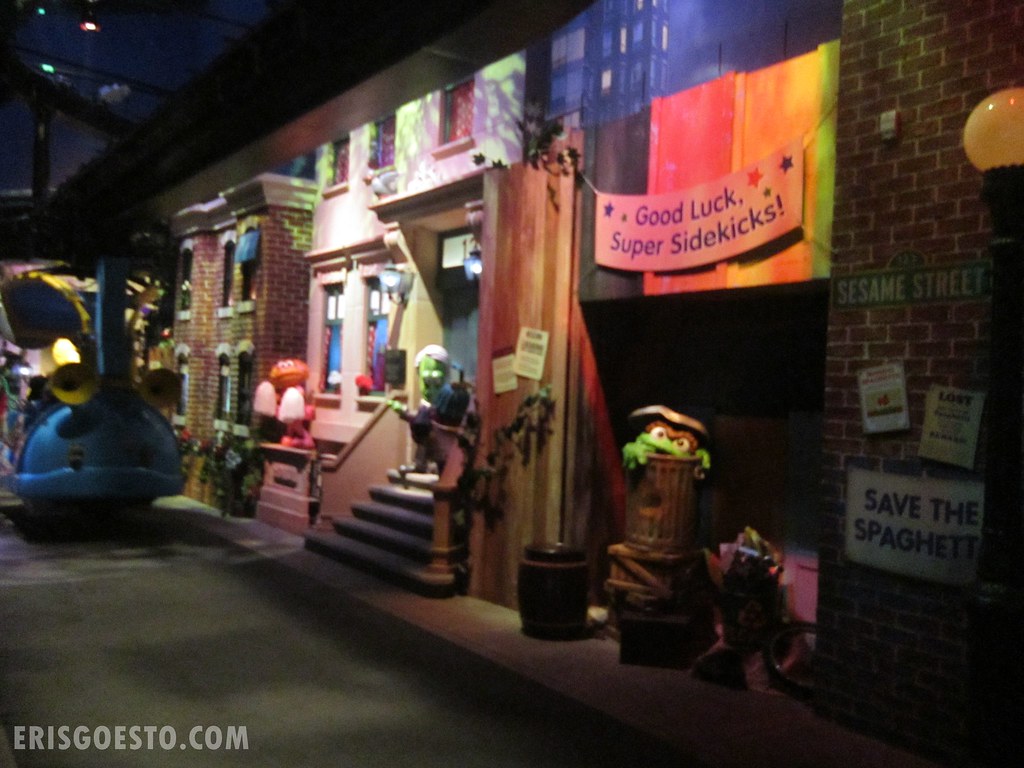 Defeat the evil Count Dracula thing in Sesame Street, who I think wants to turn the world into a spaghetti covered landscape or something.. 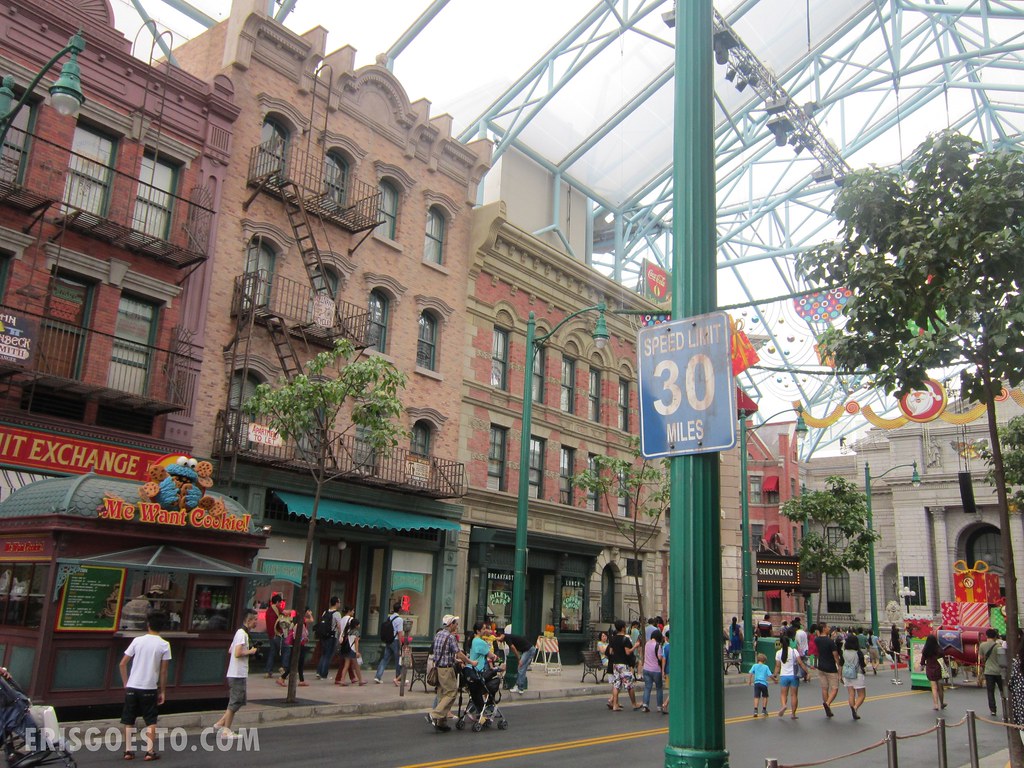 Main street, where there are always quirky mascots from well-loved movies walking the streets to take pictures with patrons. Lots of interesting ‘shops’ as well! 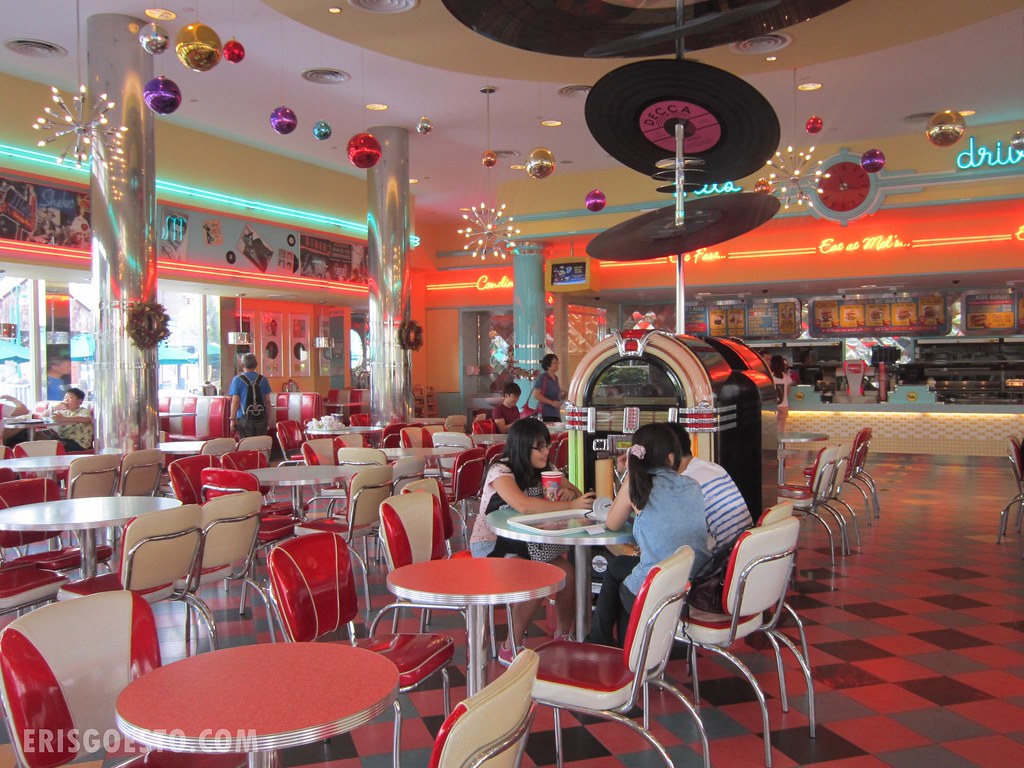 Stopped for lunch outside an American style diner, designed to look like 1950s America. A couple of old classic cars outside the place which we couldn’t miss out taking photos of. 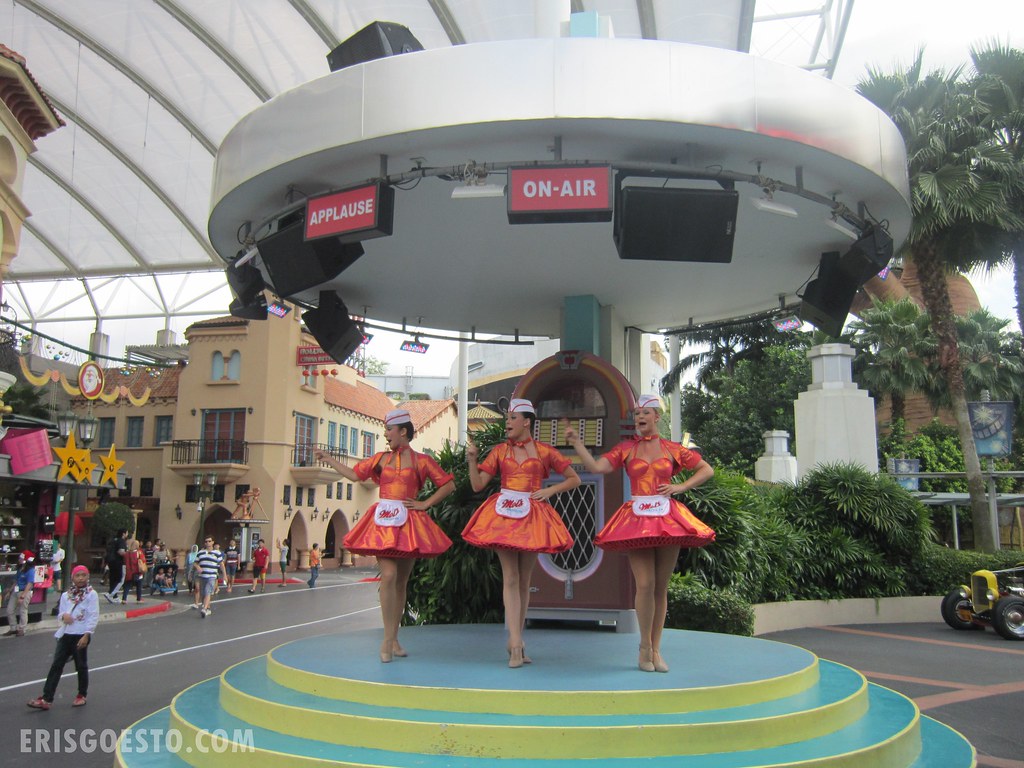 There were also diner girls performing to Candy Man by Christina Aguilera. 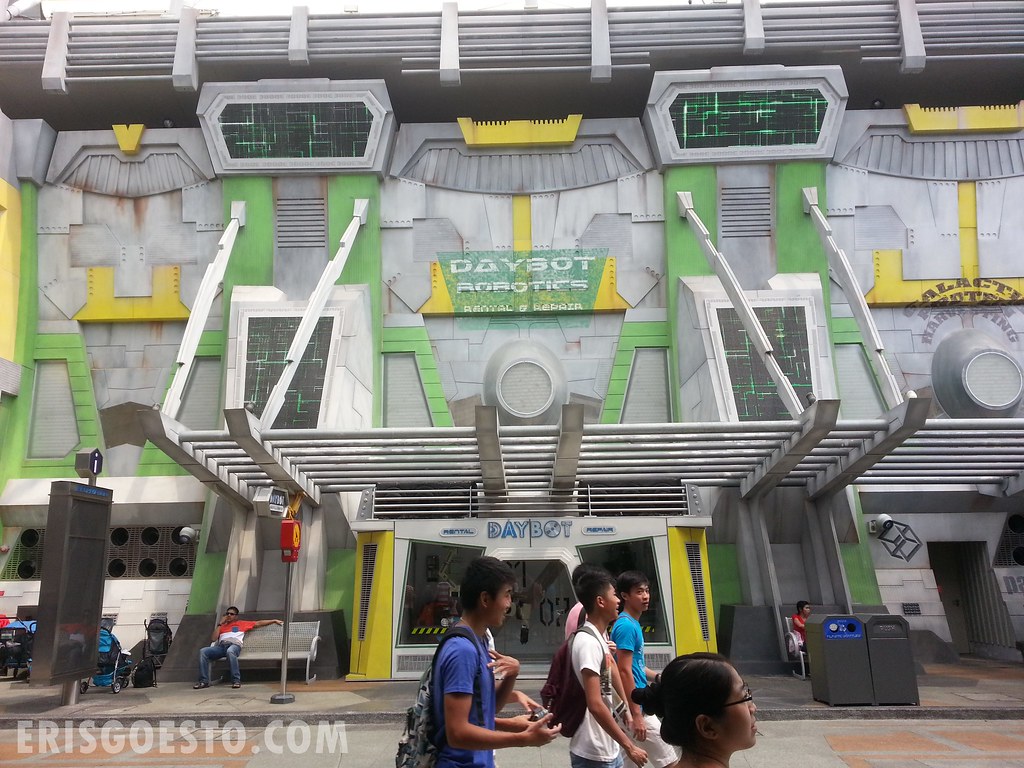 Our next ride was the much-anticipated Transformers ride. Set inside a futuristic looking building, it’s definitely one of the better rides at USS. There was a long wait, so we decided to use our express pass to get inside immediately. Once inside, everyone takes 3D glasses and sit inside a jeep looking simulator. The inside is dark and we are surrounded by huge screens. The ‘story’ of the ride is that the Decepticons are attacking the base, so the Transformers and the rider (the narrator will refer to the riders directly as we ‘escape’ from Megatron) will have to get out from the base and into the city. The use of strobe lights, smoke and wind make the ride very realistic. The 3D effects are fantastic, even for someone who wears glasses like me (I never enjoy watching 3D movies coz of my glasses, but this was awesome) – like when the evil bots hurl ‘rocks’ at the vehicle.

The climatic scene is when the entire jeep falls from a skyscraper – the feeling is realistic as the jeep ‘plunges’ down. So if you’re in USS, this is one of the must-go-to rides here. 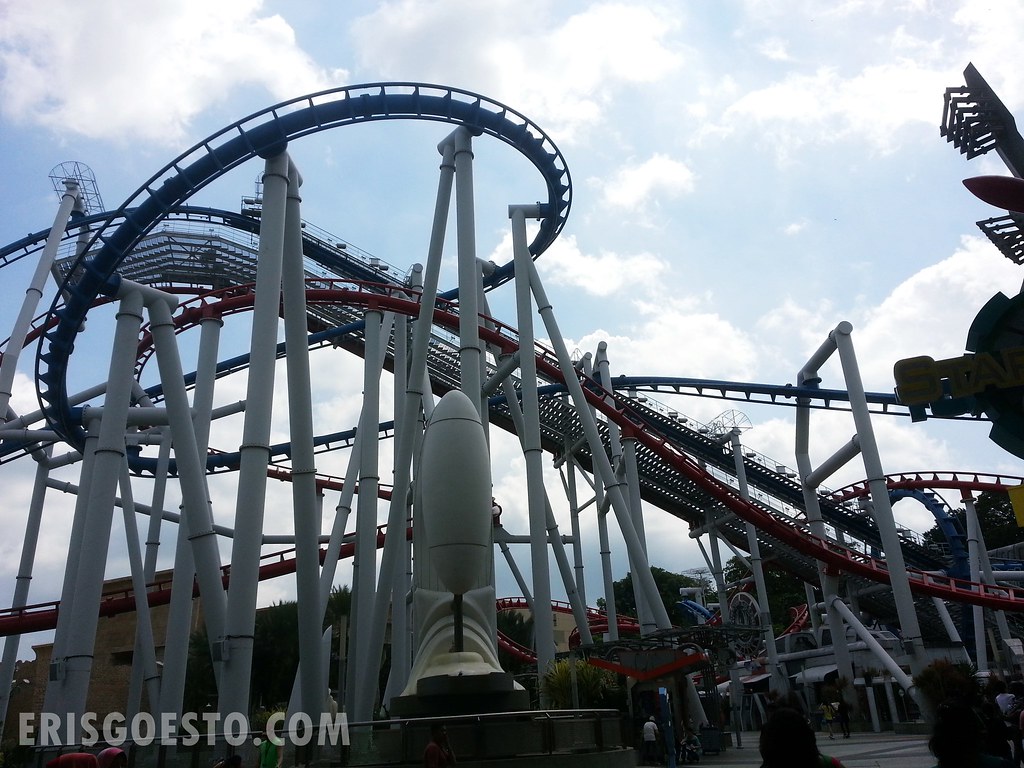 We wanted to go on the Human and Cyclone rollercoaster rides, based on the movie Battlestar Galactica, but it was closed for maintenance. Noooooo ~ T^T 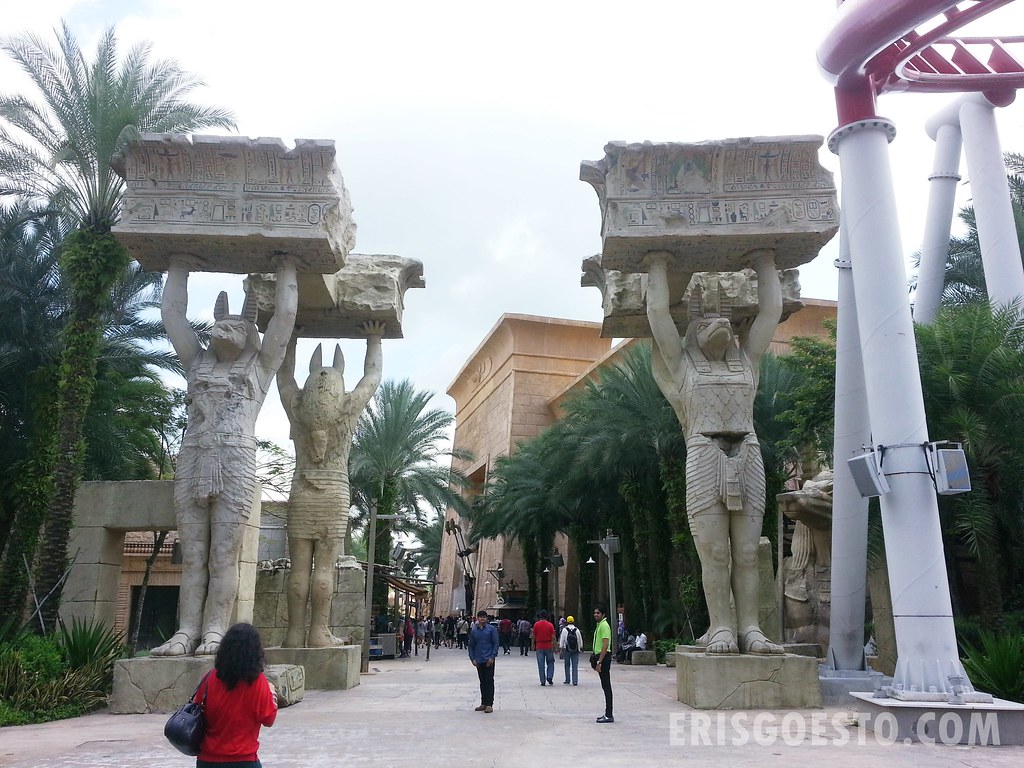 After the Transformers area was The Mummy section, dedicated to one of my favourite comedy action-adventure films when I was younger. Who wouldn’t like quirky yet rugged Brendan Fraser ? Tall statues of the Greek jackal-headed god Anubis held up stone slabs at the entrance, where there is a replica of an ancient tomb – which houses The Mummy ride. 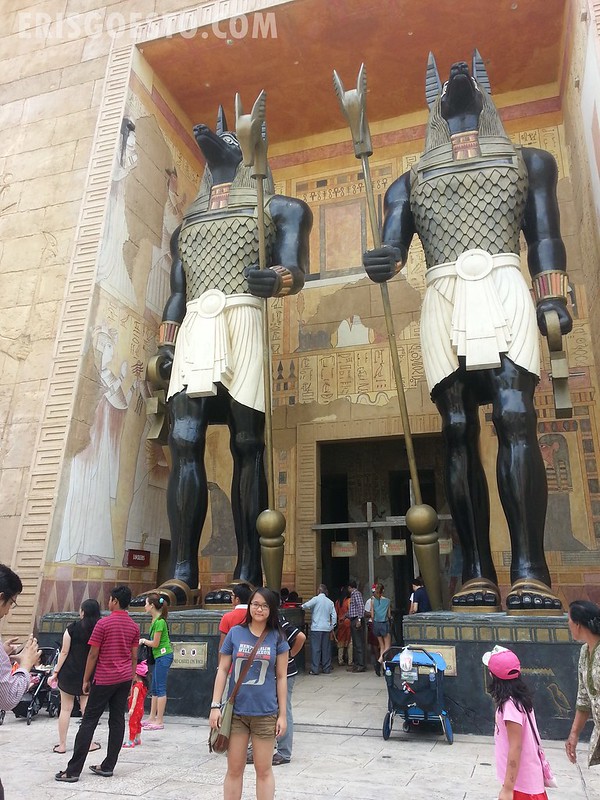 Grace didn’t have the stomach for fast rides, so Jaryl and I had to queue up for nearly 45 minutes for the two minute ride… lol. The wait to the ride is designed like an ancient tomb, and it’s very dark inside. I stumbled a few times, coz my astig means my eyes are not great at detecting light. The indoor rollercoaster was exciting, with 4D effects ~ there are parts where there’s fire and you can feel the actual heat radiating from the ceiling. I still feel that after European rollercoasters, Asian ones are nothing

The Malay lady next to Jaryl was funny. She was on the ride with her husband, and at the end of it she was laughing and saying ‘I’m too old for this shit!’. 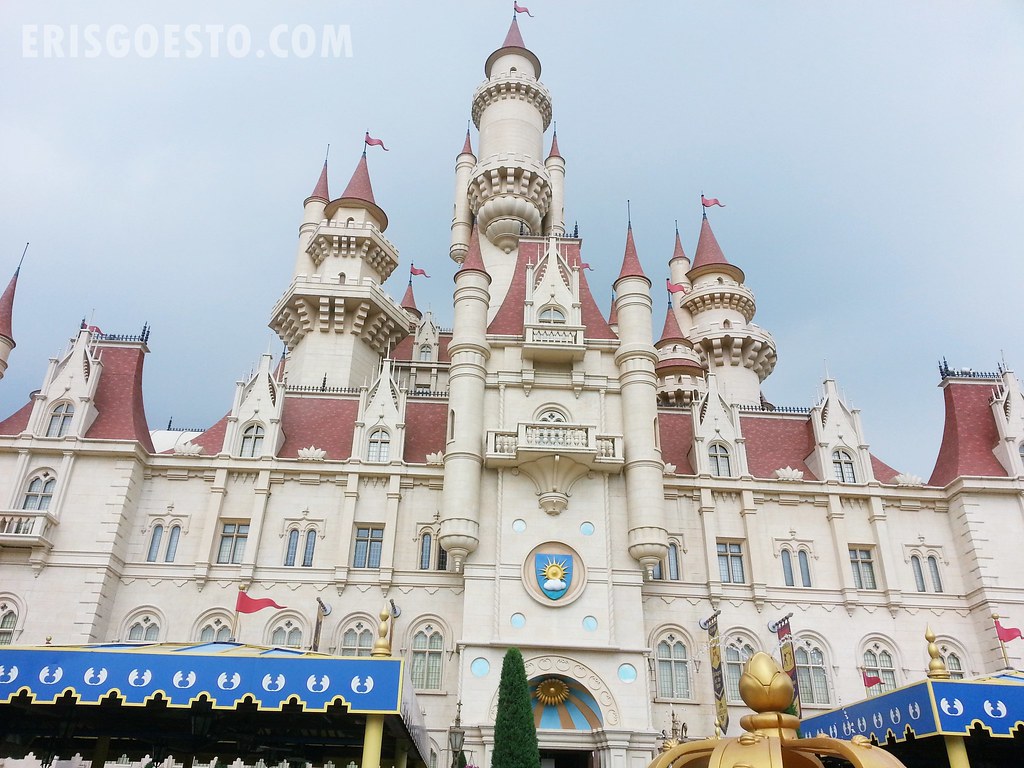 Moving on, we came to Fairytale land, home of our favourite green ogre – Shrek. Shrek is one of my favourite animations, because I like how they retell classic fairytales into something unique and different. The castle set in the Kingdom of FarFar Away reminds one of the Sleeping Beauty castle in Disneyland. There were also lots of ‘themed’ shops, such as the souvenir place which had a small wooden ferris wheel inside, or the restaurant, which has wooden benches and tables like a proper fairytale inn should. 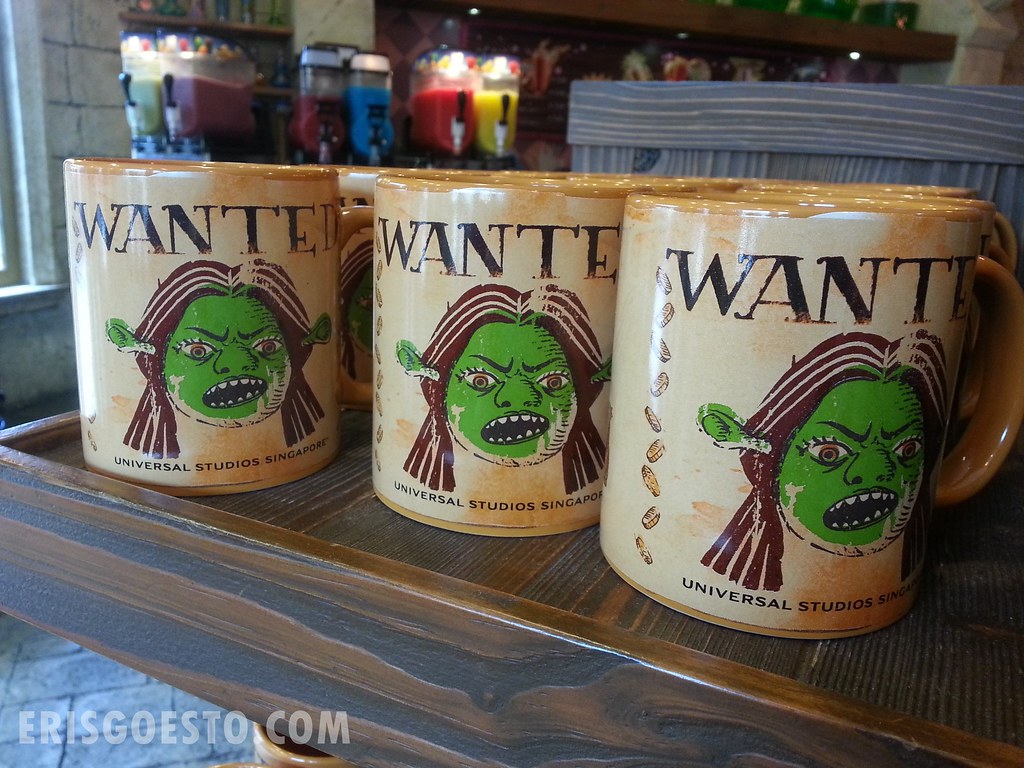 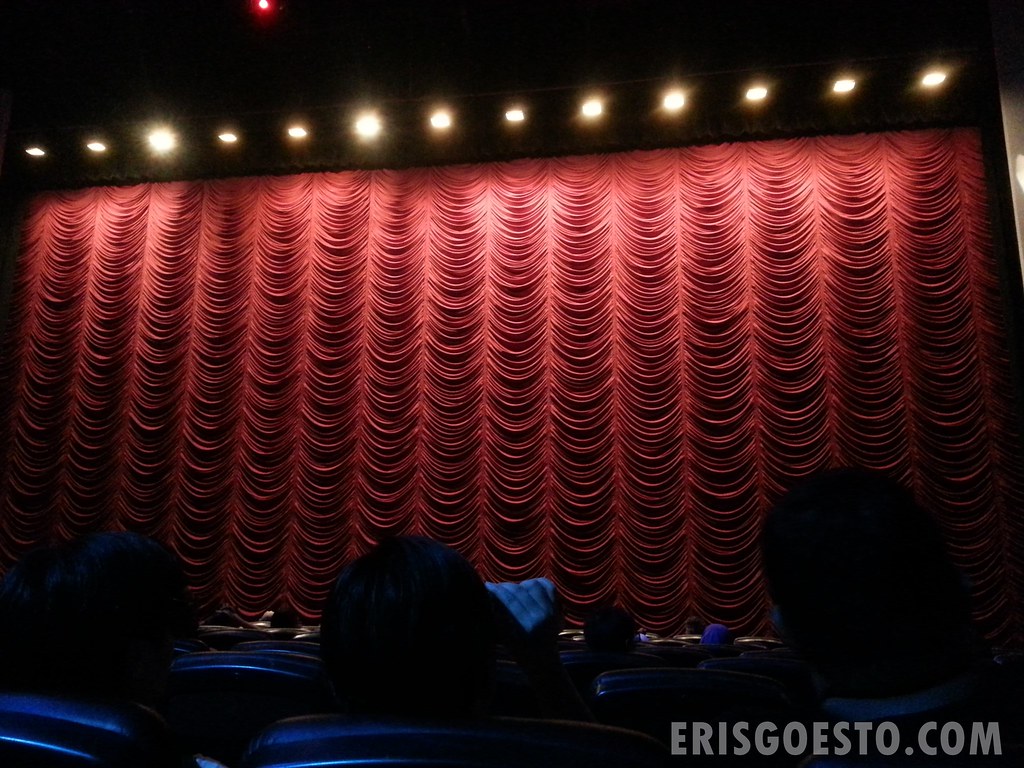 Me and Grace went inside the 4D show, which has Shrek and Donkey chasing after the dead Lord Farquhar’s spirit, who has captured Fiona to be his bride. There were funny parts during the show, like when Donkey sneezed on screen and water splashed onto our faces (its just water, but the psychological effect was kinda ew), or how ‘spiders’ poked and prodded at the audience’s feet through little air holes at the bottom of the seats. The show itself was maybe 20 minutes, but very fun to watch. I’m guessing this will be the future of cinema next time. 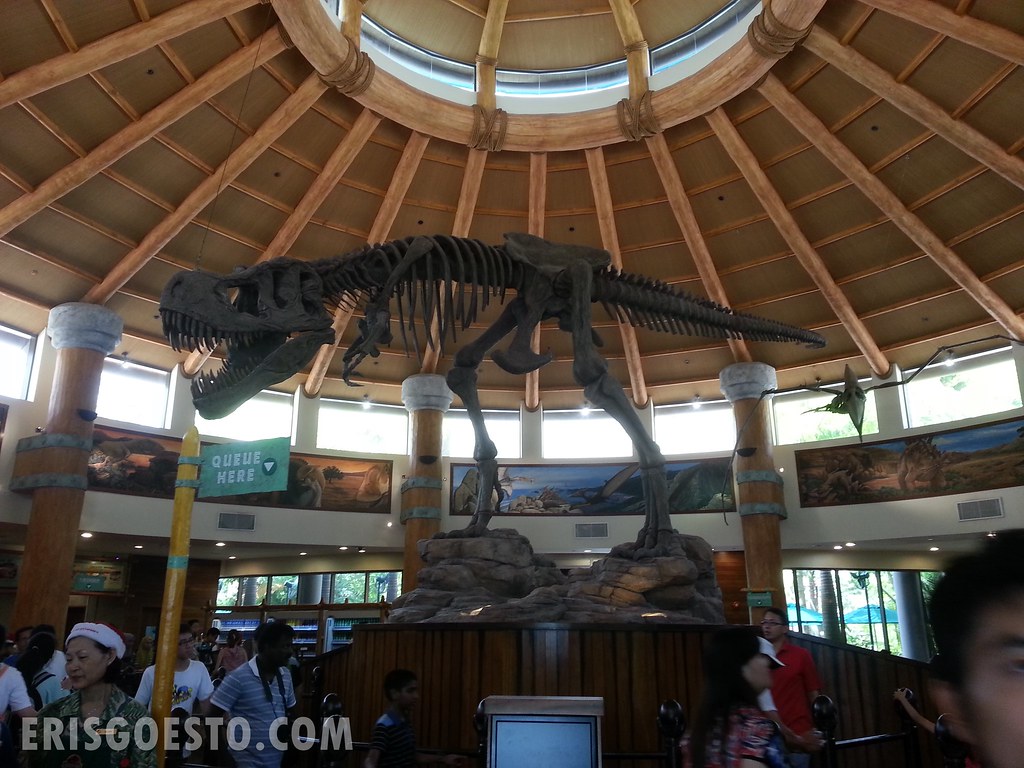 Next was Jurassic Park, which has a cafeteria resembling the actual scene in the movies, the one with the huge dinosaur skeleton in the middle and where the raptors attack the group of survivors. There’s a wet ride here which has visitors sitting in boats while going through the ‘rapids’, but it started raining just as we were queueing up. The park has strict rules on thunder/rain and rides, so we ended up walking over to the Madagascar section for some safe, indoor kiddie rides while waiting for the rain to subside.

Then we went to see a real movie set – how sometimes, when they’re not using CG, the movie crew has to set up props, the good old fashioned way. This was a scene of a storm in a boat house, with New York City in the background. It was tremendously awesome, especially the background screen behind the windows. During the storm, they fell off and it actually LOOKED like New York City was really out there. The ‘platform’ was set on fire, along with smoke effects and things falling down. Way more realistic than CG. 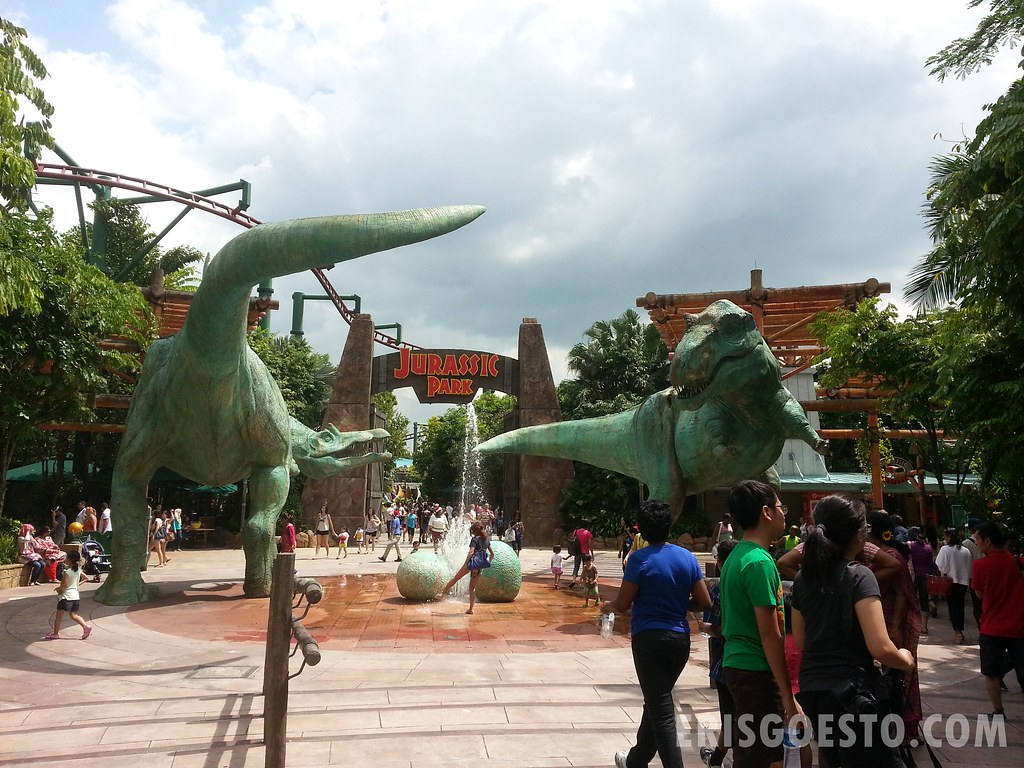 The rain subsided a little after that, so we went back to Jurassic Park for our last ride – the rapids. It wasn’t very exciting, but the thing is that certain seats in the boat would get the person soaking wet when we got to the plunge, and Jaryl was extremely ‘lucky’ – got completely soaked head to foot. It started to rain for real after that ride, so we decided to call it a day.

Heading back. The sky was already dark with storm clouds – and then a furious rain bombarded us as we lined back to the monorail. The rain was going sideways, the wind was in a frenzy – was like a tropical storm. Lucky we managed to finish the rides. Went back to Marina Bay Sands for a hotpot dinner in the cold weather.