One of the great things about living in this country? There’s an abundance of beaches and islands – most of which are only a few hours away from the capital city of Kuala Lumpur. On the East Coast, there are beautiful, private retreats and 5-star resorts on islands such as Pulau Tioman, Pulau Redang and Pulau Perhentian. In the West, where I live, Pulau Pangkor makes a good choice for a relaxing weekend escapade, without burning a hole in your pocket! 🙂

Pulau Pangkor, or Pangkor Island, is located just off the coast of Lumut in Perak, about three hours drive from Kuala Lumpur. Historically, it acted as a refuge for the local fishermen, merchants and even pirates. In the 17th century, Dutchmen, who ruled the East Indies (including the state of Perak, before Malaysia was even formed), built a fort here in an effort to control the state’s rich tin trade. In the late 1800s, it was the location of the famous Pangkor Treaty, which was signed by the British government and a contender for the Perak throne – thus beginning the British colonial rule of the Malay peninsula.

The island itself isn’t that big, covering only 18km, with a population of 25,000. The interior is lush tropical jungle, while the coastal areas are mostly for fishing and tourism.

GETTING TO PANGKOR ISLAND

The island is about 3kms from the mainland, but there are no bridges across so everyone has to take the ferry from Lumut Jetty. The ride takes half an hour and costs RM10 ($2.50). Ferries are available frequently so no worries if you miss one – there’s always the next  (last ferry from island to mainland is at 7.30pm). Once you arrive on the island, there are shuttle vans that will ferry you to your destination. There aren’t many cars around, so pollution is less too. 🙂 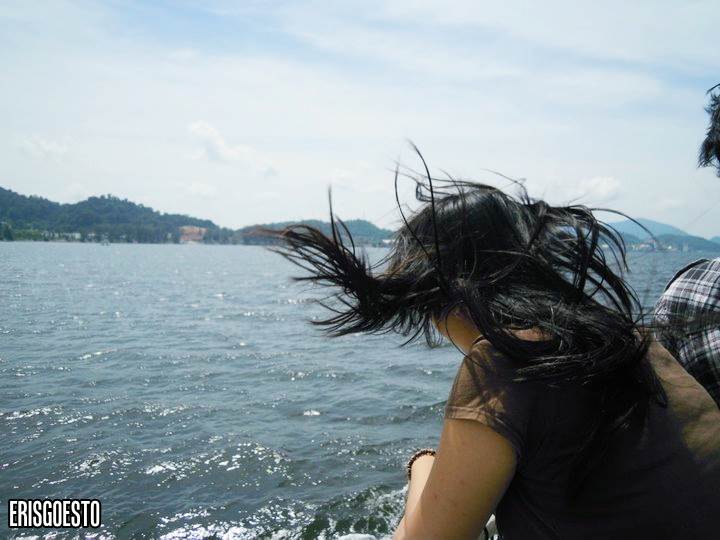 Enjoy the Ride (and the sea breeze!)

The ferries have an open deck and an air conditioned interior. Passengers can stand outside and take in their first sights of the island.

Being a tourist destination, there are loads of options on Pangkor Island, depending on your budget. Most hotels on the main island are budget/boutique/three-star. If you’re looking for luxury, your best bet is at Pangkor Laut, a separate private island next to the main one, which is only accessible via private jetty.

For my trip there with friends, we checked into one called Seaview Hotel. True to its name, the place offers awesome beachfront views of Pasir Bogak. You can tell its quite an old hotel from its basic deco – they still use old-style wooden frame sofas which I had in my house in the 90s – but everything is clean and relatively well-maintained.

**Interesting tidbit: This place is run by a former Thomas Cup champion, Datuk Tan Yee Khan, who won the title as part of our national doubles team in 1967! 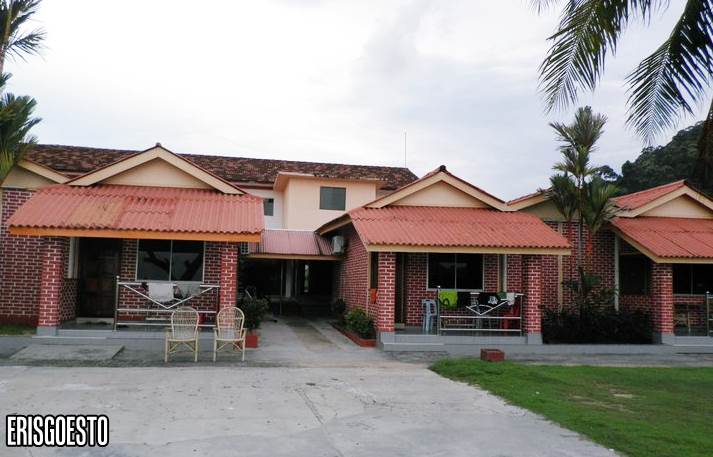 The red-bricked chalets look cheery, and can house about four people each. You can literally walk out and be on the beach already 🙂

Here are some things you can do during your stay!

It would be quite weird to come to an island and not take a stroll on the beach. Pasir Bogak, which is the beach fronting our hotel, is an excellent spot since it is relatively secluded. One can also find water sport operators who will take you on banana boat rides, jet skis and the like. The water isn’t crystal clear, being a dark green-blue, but its definitely cleaner than places like Port Dickson.

If you are taking a dip, do watch out for stuff like jellyfish though!

I can’t stand places where people have picnics and then leave all their garbage behind, but thankfully no such problem here so it’s safe to walk around barefoot. Love the feeling of sand in my toes ! 🙂

2 ) Mess Around in the Sand

…. like how we’re doing to JN here. We even gave him two extra ‘mounds’ on his chest, lol.

At the end of the Pasir Bogak Beach is an outcropping of smooth rocks and boulders, which visitors can climb onto to take pictures. Do be careful though as they can get slippery from sea water.

4) Do an island tour

There are numerous activities to do during the day. Go boating with the local fisherman and see how they catch the marine produce. We visited a factory selling salted fish and seafood snacks.

There are two temples on the island, namely the Fu Lin Kung Temple at the foot of Pangkor Hill, and the Lin Ye Kong Temple near Teluk Nipah. The best way to get there is by shuttle van. Fu Lin Kung (above) has numerous landscaped gardens, mini shrines and gazebos mimicking an ancient Chinese garden, as well as a mini Great Wall of China structure running up a hill slope, featuring giant rocks with Chinese characters on them. 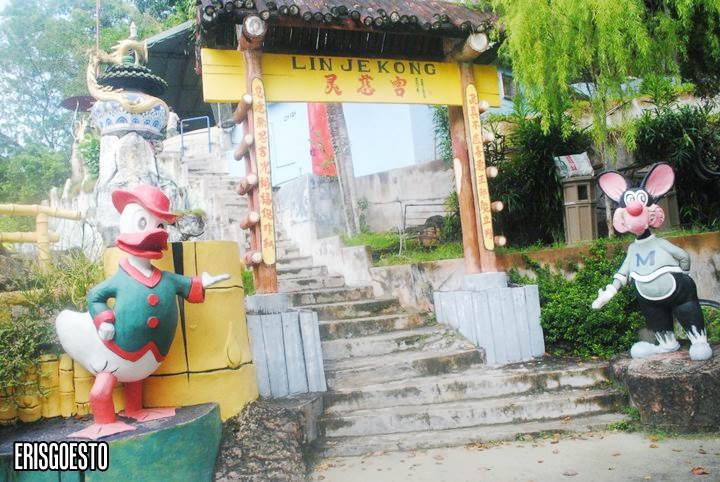 Lin Je Kong is part fun tourist attraction, part place of worship – why else would there be ripoff statues of Dolan and what I can only assume is Mickey Mouse? In all seriousness, despite all the cartoonish characters around, you can pray for blessings from the deities housed in the shrines. 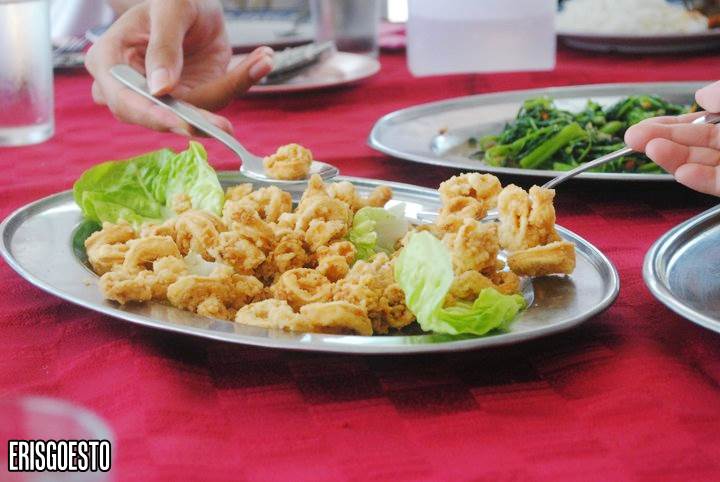 Pangkor, being a fishing island, is obviously home to some of the freshest seafood you’ll find on this side of the planet. The stuff might still have been swimming in the ocean this morning. Fried calamari is love. 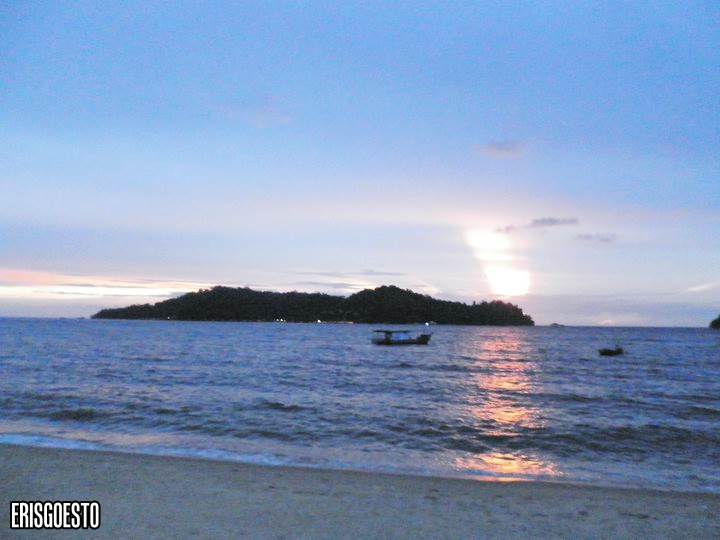 Watch as the sun casts a wide orange light across the deepening blue waters, while fishing boats make their way back to the docks. We set our chairs out in front of the chalet and since KW brought his guitar, we sang and played campfire songs (minus the campfire). 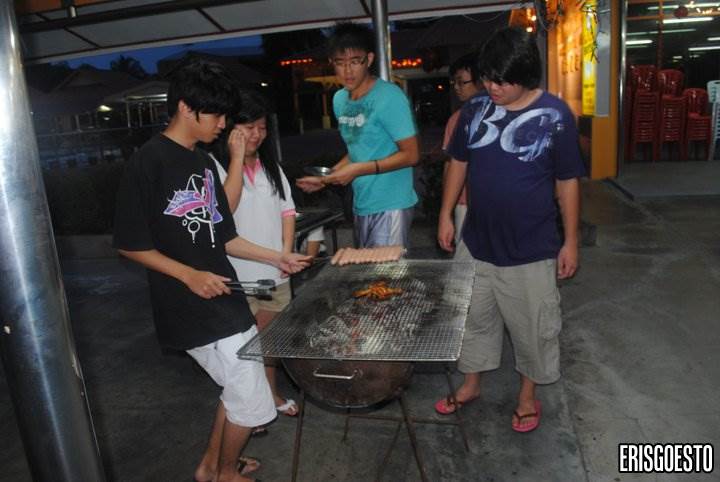 8) Tuck into an outdoor Barbecue Dinner

Our BBQ was provided by the hotel. Being the smart-alecs that we were, we told the restaurant staff that we wanted to cook it ourselves….

The food ended up getting burnt or were undercooked, etc. JN had to go inside and ask the resto people, “Er… kakak. Boleh tolong ka?” She laughed in his face lol.

The food wasn’t bad though. There was chicken, squid, shrimp, bread and butter, fish.. but there was alot of leftover crabs. Pity the crabs, they died for nothing xD

Our resort sees some pretty peculiar visitors, namely, hornbills. These beautiful birds with horns on their heads and fluffy down on their legs (giving them the appearance of wearing trousers!) flock to the restaurant area in the evening, where staff members feed them fruits.

So, how about it? Is Pangkor Island on your list of places to go to over the holidays? 🙂