When visiting the National Museum of Malaysia in Kuala Lumpur, most people make a beeline for the grand main building – a three-storey structure with various galleries within chronicling the history of Malaysia from Palaeolithic times up until the modern era.

Next to it, however, is a smaller, humble-looking building that can be easy to miss – which houses the Orang Asli Crafts Museum, aka Muzium Seni Kraf Orang Asli. Displays are limited but they offer an interesting insight into the often overlooked Orang Asli community in Malaysia.

The Orang Asli (literally ‘aborigines’ or the ‘original people’) are natives of Peninsular Malaysia who pre-date the arrival of the Malays. Numbering around 150 – 200, 000, they form around 0.7% of the population.

Despite being the true natives of the land, many of them live below the poverty line, with their rights often trampled upon (especially in regards to land ownership, as many Orang Asli live off the land) and their access to modern facilities such as healthcare and education are limited. There are three distinct groups: the Negrito, Senoi and Proto-Malay, further divided into 18 ethnic tribes, each with their own language, culture, traditions and practices. Most still live in or close to forests, and practice animism. Some of these tribes include the Mah Meri, Jakun, Temuan, Temiar, Seletar, Bateq and Semai, among others. 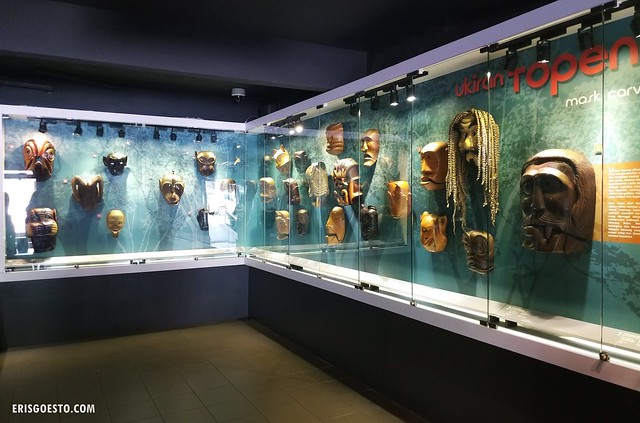 Most of the items on display at the Museum are masks and carvings from the Mah Meri and Jah Hut tribes. The Mah Meri of Selangor are among the most well known Orang Asli tribes. They live close to the coast and make a living as fishermen, although in recent years, tourism has also become an important source of livelihood. They are extremely skilled at woodcarving, hence the masks which are used in rituals and ancestor worship. Ancestor Day, a massive celebration that honours the tribe’s ancestral spirits, is a spectacle to behold, attracting tourists from all over the world to Pulau Carey, where most of the tribe are concentrated at. 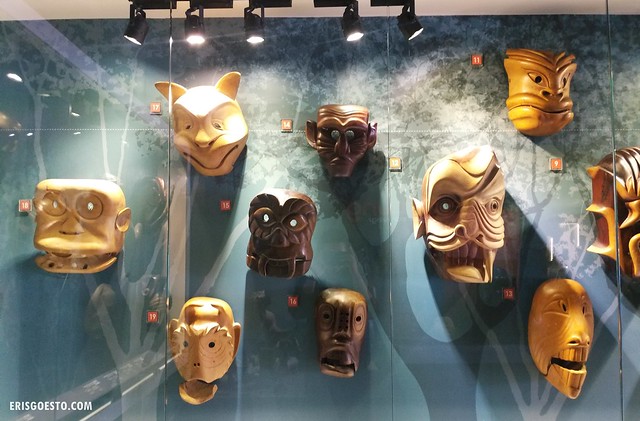 Typically carved from Pulai wood which is soft and pliable, Mah Meri masks are a representation of their ancestor spirits, called Moyang. Some are based on animal figures as well, such as Siamang (monkey – far left), and cow (top row, far left). The masks are named after the Moyang Spirits, such as Moyang Bojos, Moyang Hapok and Moyang Belangkas, which the Mah Meri believe are imbued with extraordinary powers. 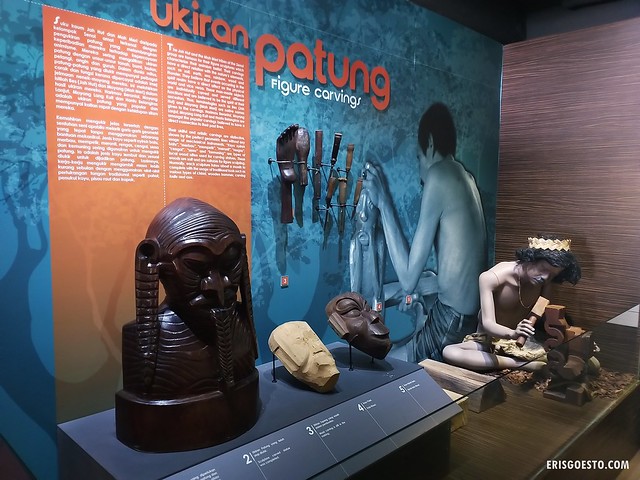 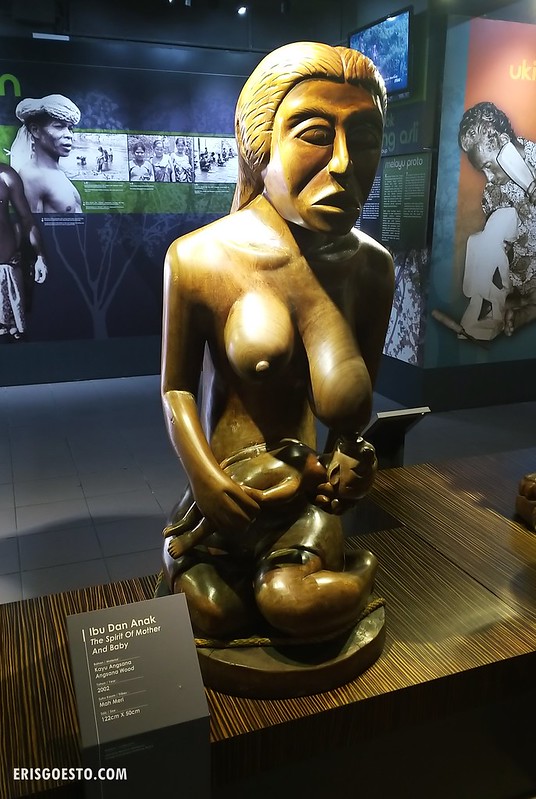 Masks are not the only thing unique to the Mah Meri, as they also have statues that represent the spirits. (Above) Spirit of Mother and Baby, carved from Angsana wood, depicting a mother carrying a suckling babe. 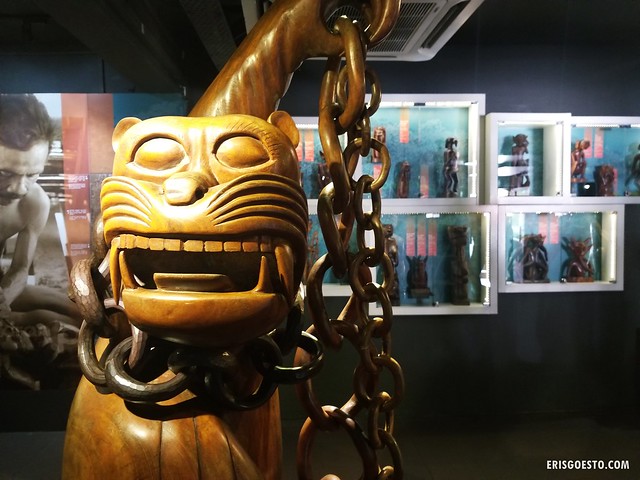 Another wood carving of a tiger spirit in chains. 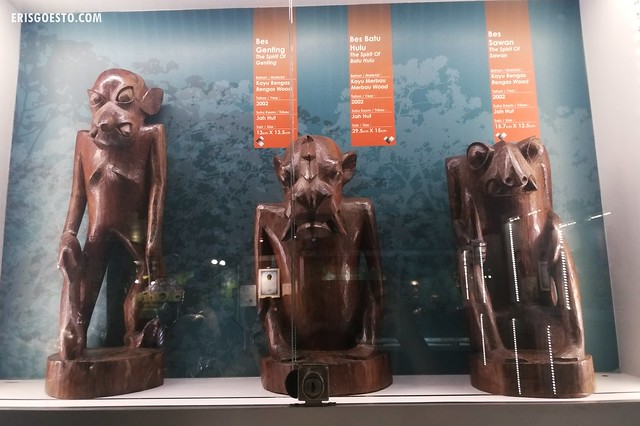 Aside from Mah Meri carvings, visitors will also find many Jah Hut wood carvings on display. The Jah Hut live in the highlands of Pahang, with the name ‘Jah Hut’ meaning ‘different people’ in their language. They live in or near forests with agriculture as their main income, as well as hunting and gathering the bounty of nature. Pahang is home to lush and dense rainforests, and the Jah Hut, like many Orang Asli, have a strong connection to spiritualism and the land. Their carvings are representation of beings from their beliefs and mythology.

(Above) Spirits of Genting, Batu Hulu and Sawan. 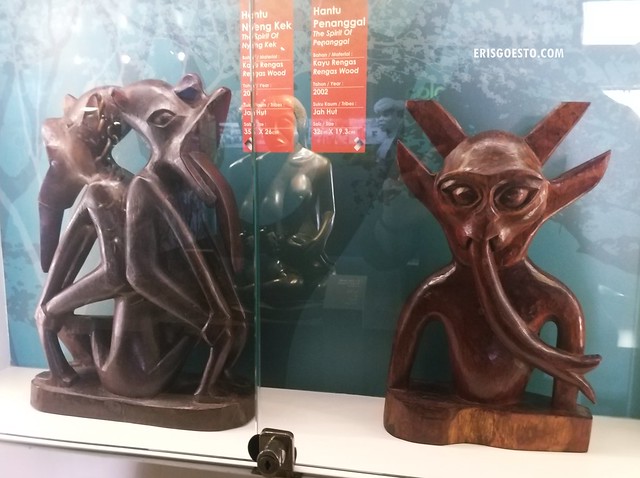 The carvings are actually a little frightening to look at, almost demonic.

I believe that there exists a realm beyond our own, which is why you should never disrespect anything while you’re hiking in a jungle (in Malaysia, we believe in ‘makhluk halus’ and ‘penunggu‘, ie spirits). Having to live off the jungle, I’m sure the Jah Hut know more of these things than we city folk do, and who is to say that these representations are not real? 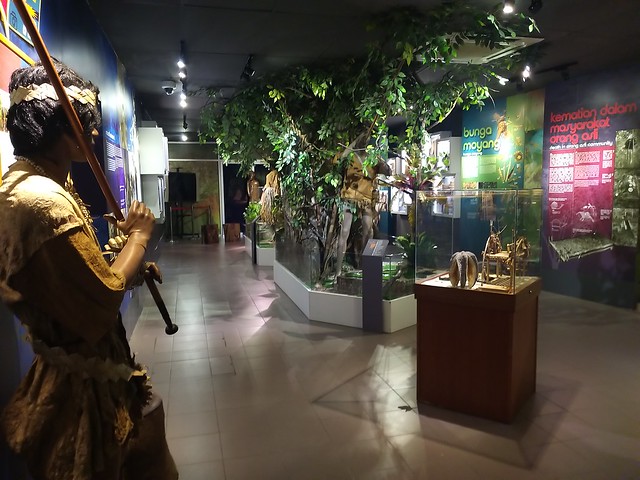 Another room in the museum houses displays on traditional clothes, arts and crafts, tools and burial ritual items. 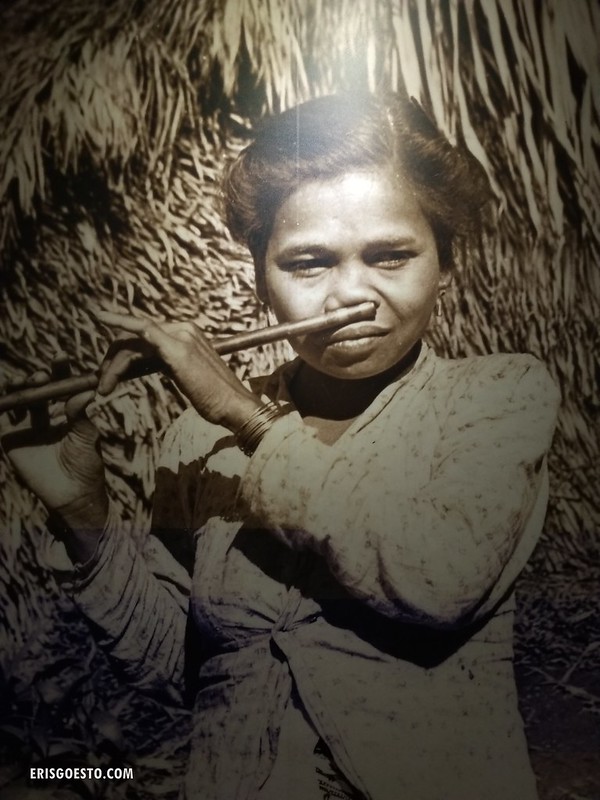 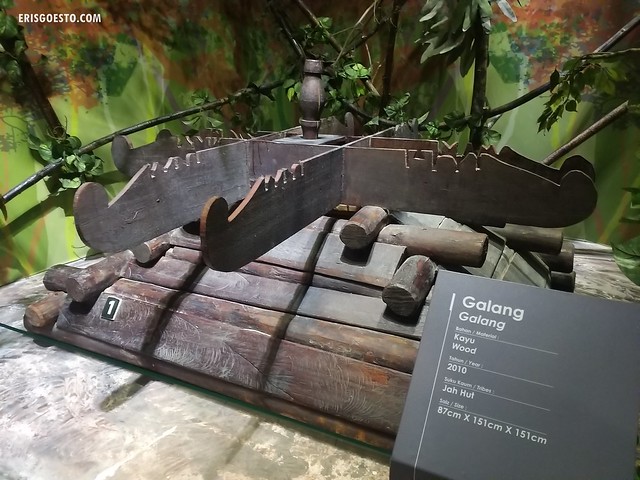 Some Orang Asli tribes, such as the Jah Hut, build wooden tombs for their departed, while others place the body in bamboo or a simple wooden coffin. 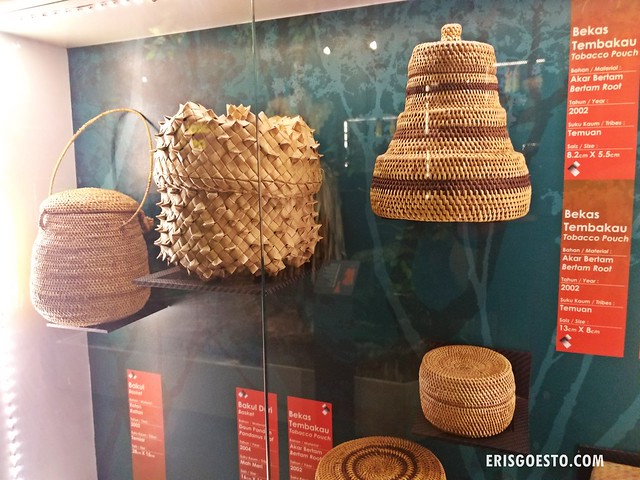 Many tribes are also known for their weaving skills, such as the Temuan and Temiar. In recent years, NGOs such as Gerai Orang Asli have helped to promote these handmade crafts to the public, where they have amassed a loyal following – thereby providing the women of these communities a way to utilise their skills for income. 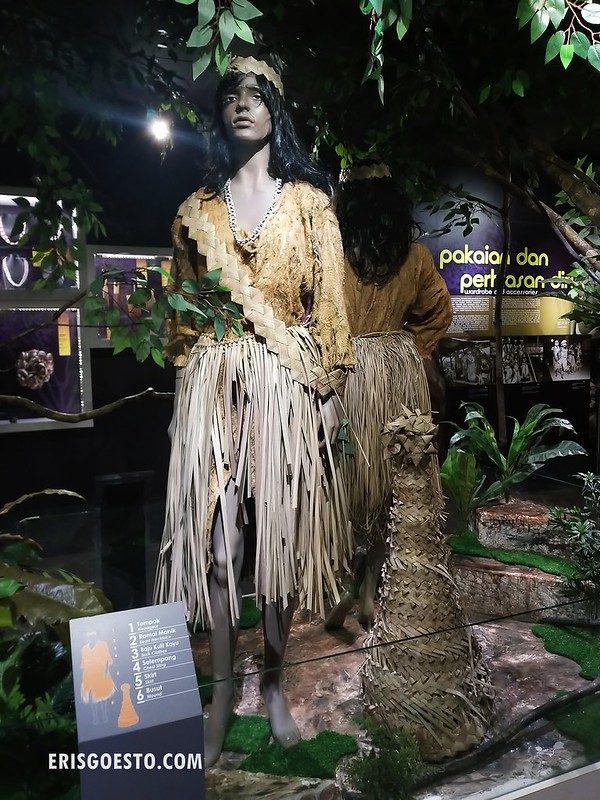 Mah Meri clothing, which consists of a tree bark shirt and palm leave skirt, as well as additional garments and accessories that are intricately plaited. The headdress worn by both the men and womenfolk resemble long dreadlocks. 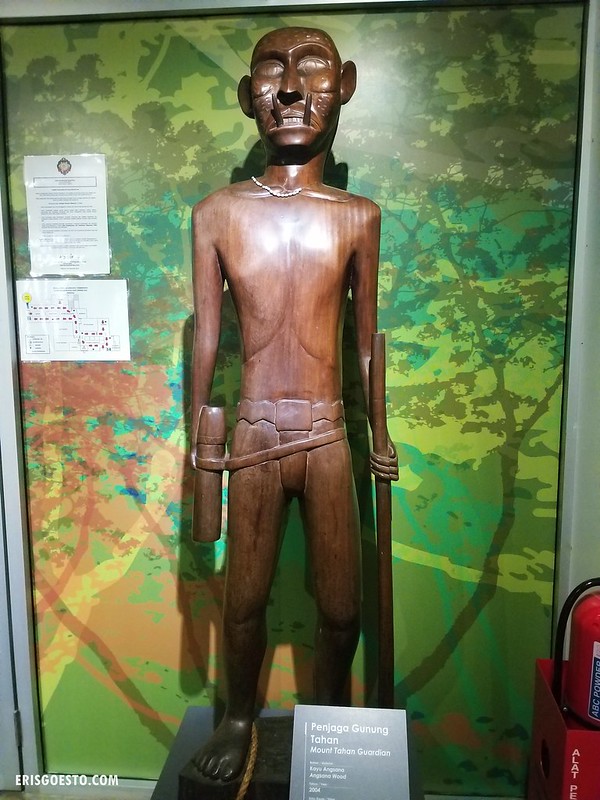 A life-sized carving of Penjaga Gunung Tahan or the Guardian of Mount Tahan. Tall and long limbed, the guardian is shown as having long protruding fangs and holding a stick, with a loincloth and a container slung around the waist. A scary apparition to bump into if you’re out hunting, to say the least.

While the Orang Asli Crafts Museum is not large by any standards, the displays are certainly interesting, offering a fascinating insight into one of Malaysia’s smallest but oldest communities. The Orang Asli have been here for thousands of years, way before any of the great civilisations came to be, and their knowledge of the land and seas have been handed down the ages. Their language and culture is slowly being eroded in modern times – which is all the more reason to educate the public on the importance of preserving them.

That being said, I think there are a couple of things that the museum can improve on to make visitor experience better:

How To Get There

The Orang Asli Crafts Museum is located within the grounds of the National Museum complex. From KL Sentral, KL’s main transportation hub, there is a 240-metre covered walkway to the museum grounds. Alternatively, take an MRT and alight at the Muzium Negara station.