The Malaysian art scene may not be as sophisticated as places like Europe or the US, but for art enthusiasts looking for a dose of the creative, the National Arts Gallery in Kuala Lumpur is a good place to start. Opened in 1958, the government-run public art gallery is housed in a modernist building with a pyramid-shaped blue-glassed roof, and regularly hosts exhibitions by various local and international artists – often enough that different visits will give you entirely different experiences! 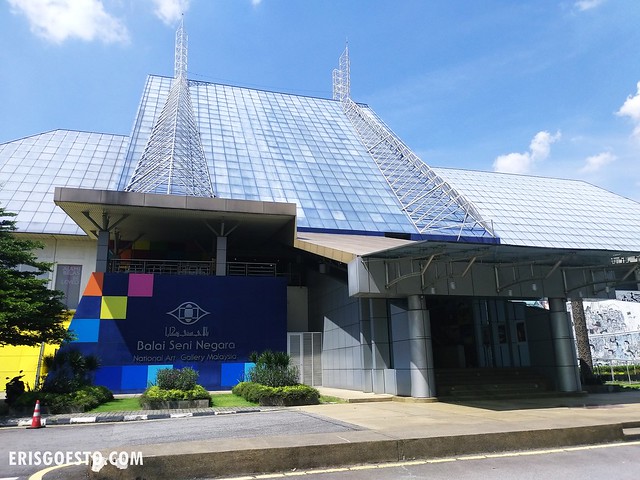 I last came here in 2016, and while the exterior has not changed, the exhibitions are completely different, so much so that I felt like I was visiting it for the first time. 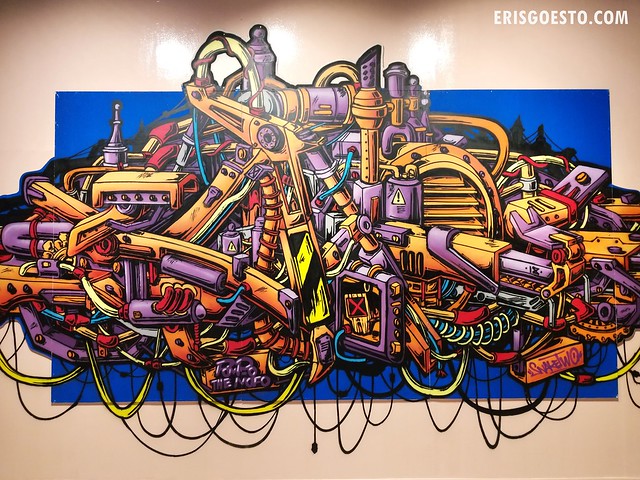 Running until March 17 is The Wall: Dinding Bandar, featuring a collection of graffiti works by 26 local artists captured on social media from years 2015 – 2018, and reproduced for the exhibition. It looks at the evolving styles, methods and development of the genre, as well as its potential in the creative arts industry and society at large. Malaysian graffiti artists are pretty well known in their field – we have artists like Kenji Chai and Cloakwork, both of whom have international fanbases and have collaborated with well known brands the likes of Hypebeast and Skechers. In KL itself, it is not uncommon to see graffiti on the side of buildings, providing a platform and space for its artists to channel visual expressions. 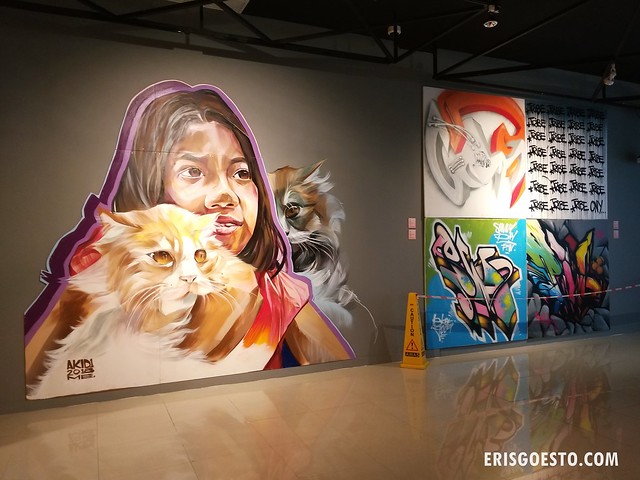 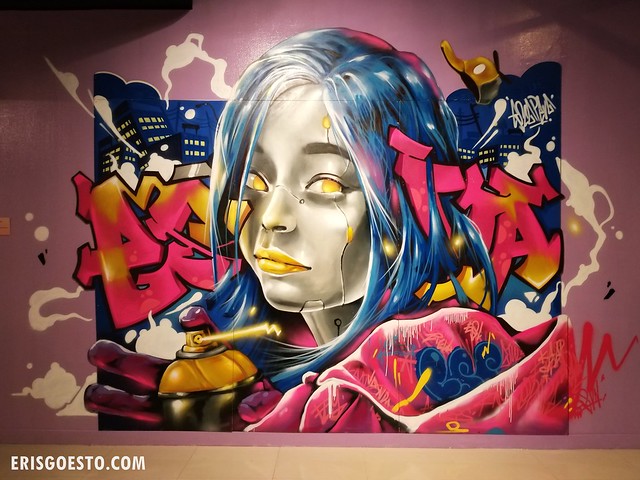 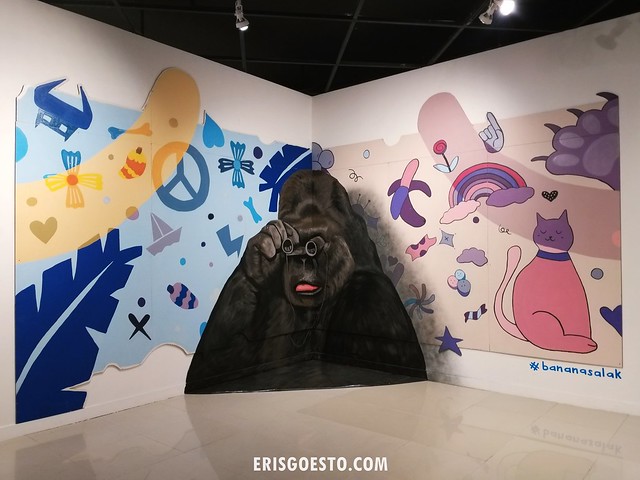 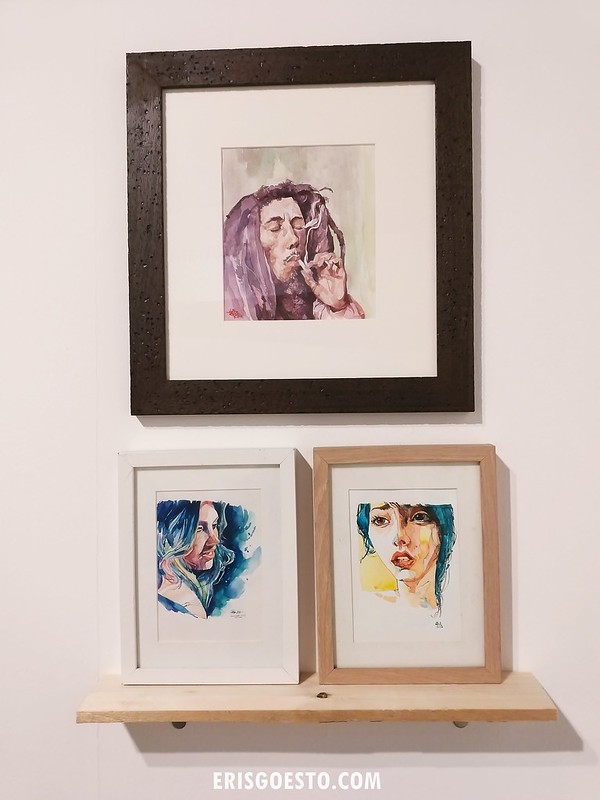 Also on the same floor is the Attention Please: Installation exhibition, organised in conjunction with the gallery’s 60th anniversary, which presents a selection of installation works from NAG’s collection. The exhibition explores the emergence of installation art in Malaysia, drawing on traditional art and cultural influences reinterpreted in modern times. 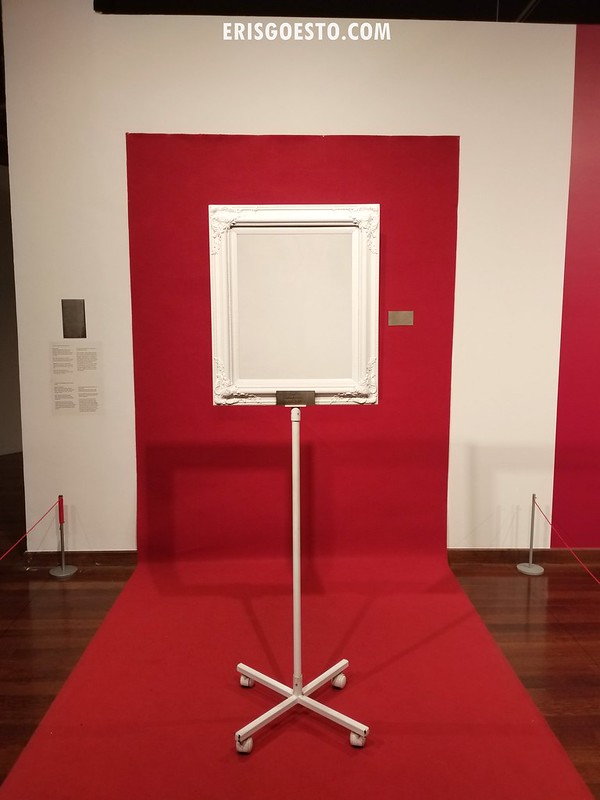 Note: This was basically a white rectangle on a red backdrop, with a white frame placed in front at a distance. When seen from a precise angle, the white was framed nicely within. 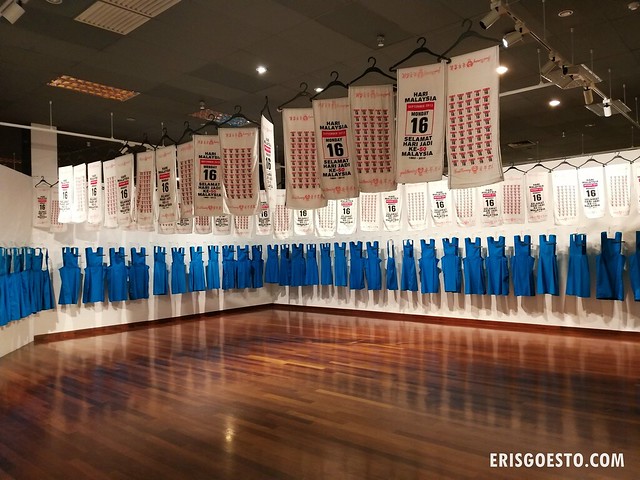 Note: Although I did not quite understand the message behind it, this was one of my favourite installations for its visual quality – the school pinafores casting shadows across the room, the uniform towels commemorating Malaysia’s 50th birthday, the neat rows of plates in plastic, printed over with the same messages. 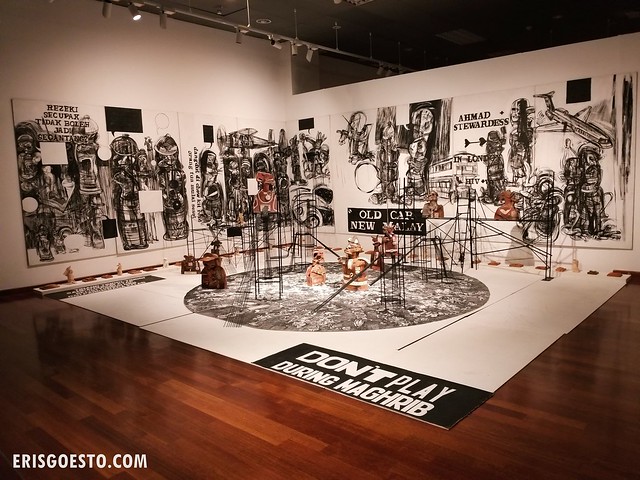 In Malay-Muslim culture, waktu maghrib (evening prayer time when the sky turns dark) is said to be when spirits and demons come out to play. The installation, made to resemble a playground but with various somewhat grotesque figures around it, must be a reflection of the title. 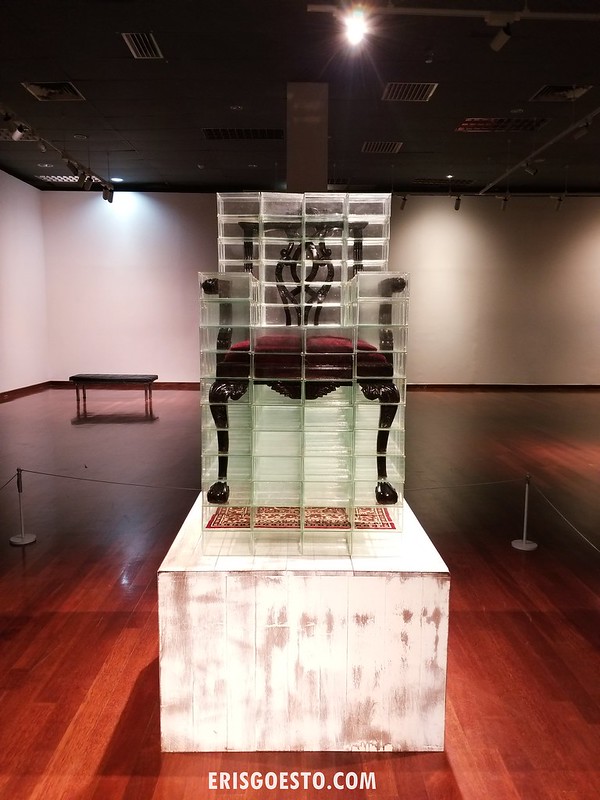 Note: The odd thing about this piece? You know how cameras  can detect ‘faces’ in a picture, right? Well I aimed my camera at it and the circle for a ‘face’ popped up wtf no 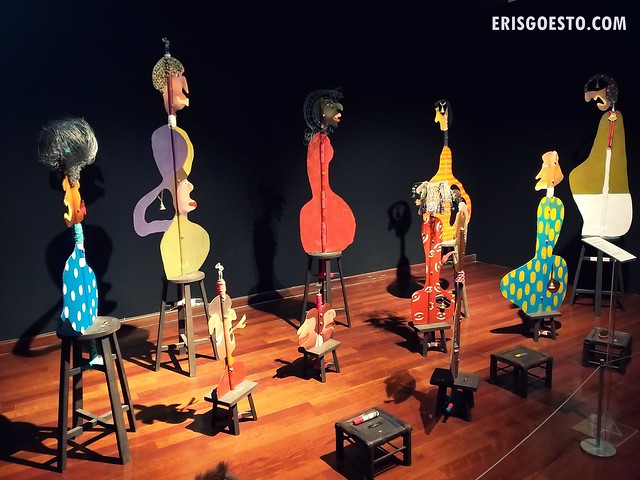 An installation ispired by the ancient art of shadow puppetry, prevalent in the northern states of Kelantan and Kedah. 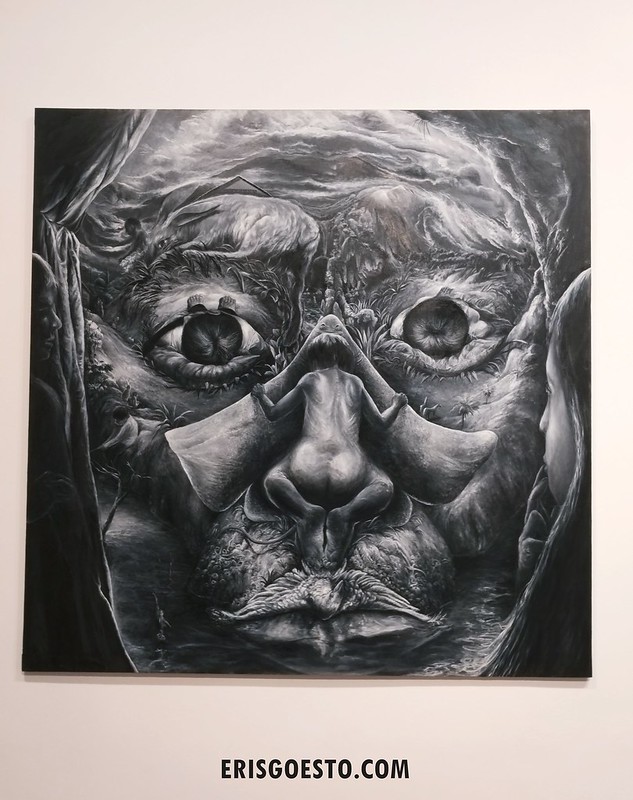 Chang Yoong Chia’s Second Life exhibition (running until 31 January – yes I am a bit late to post this 😦 is a culmination of over 20 years of work. Not being in the art world, this is the first time I’ve seen his works – and they’re pretty mindblowing. The pieces are mostly in black, white and grey – resembling pencil sketches – but extremely minute and almost painfully detailed. Subjects dressed in office attire seemingly enter a world of fantasy filled with animals, fairies and odd things. It’s quite uncanny, but at the same time draws you in to each portrait. 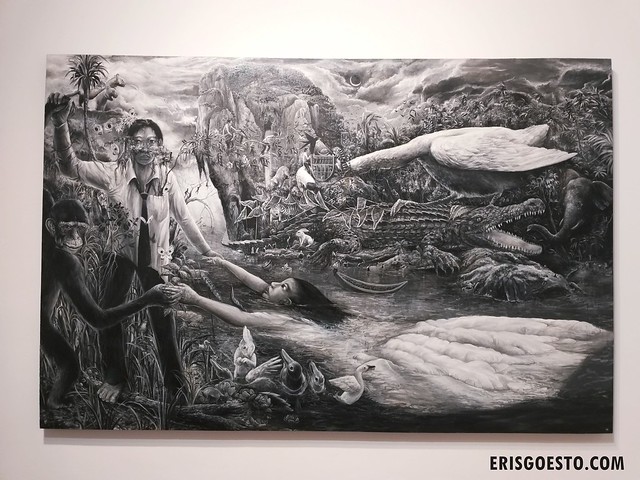 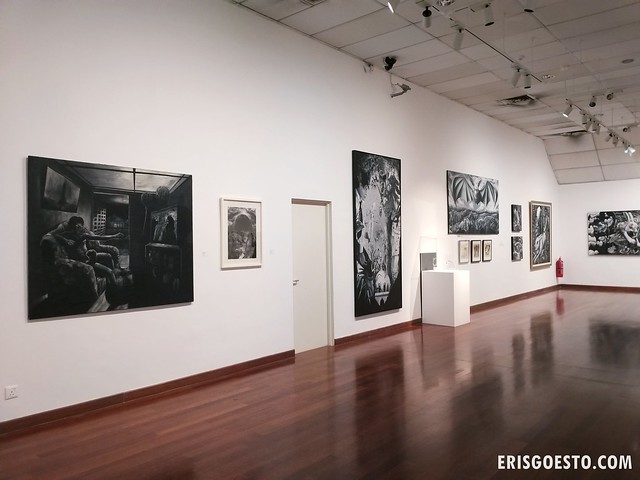 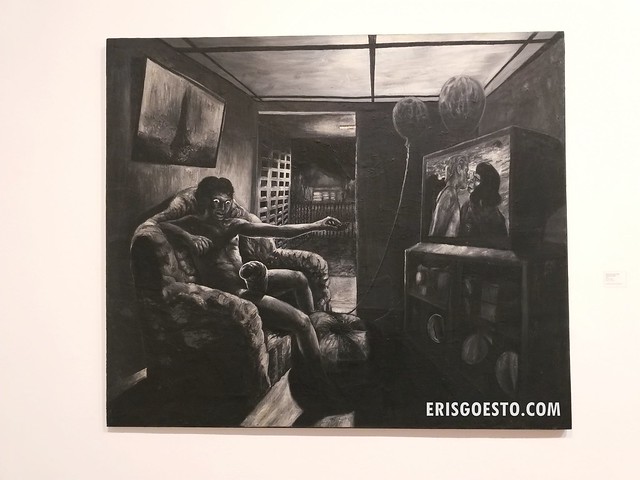 You have to marvel at the work but I wouldn’t want this in my living room lol. Very H.P.Lovecraft-esque. 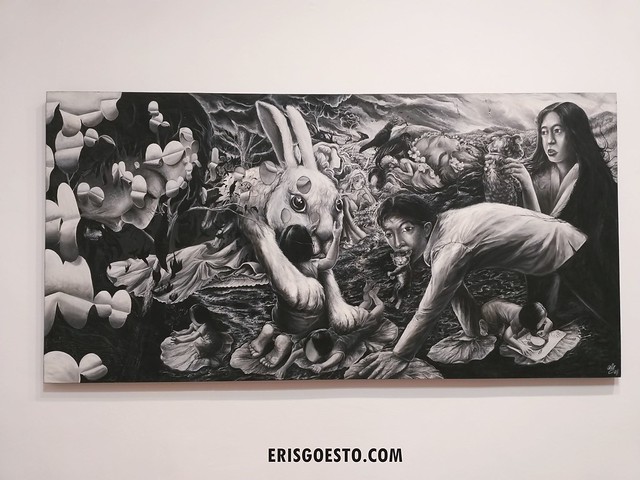 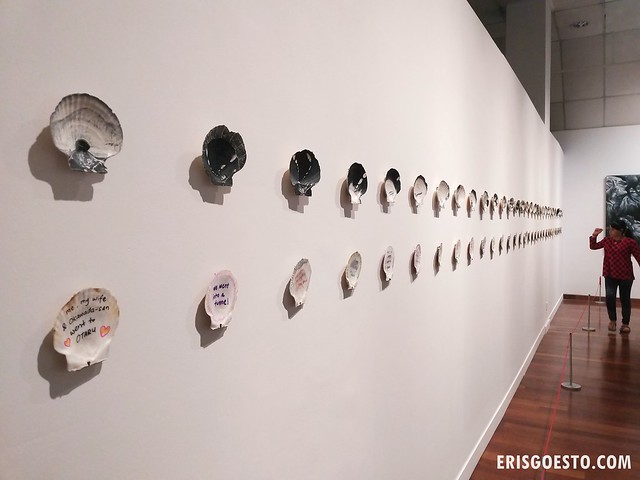 Paintings are not the only thing in Chang’s collection. I liked this series of painted seashells in which he describes a holiday in Japan with his wife, the shells forming panels of a storyboard. 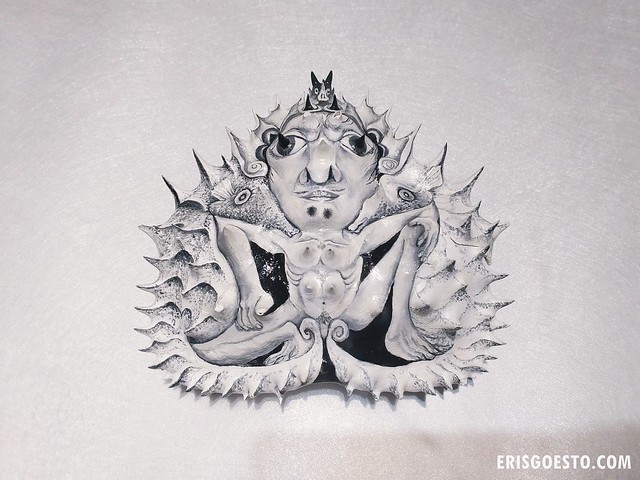 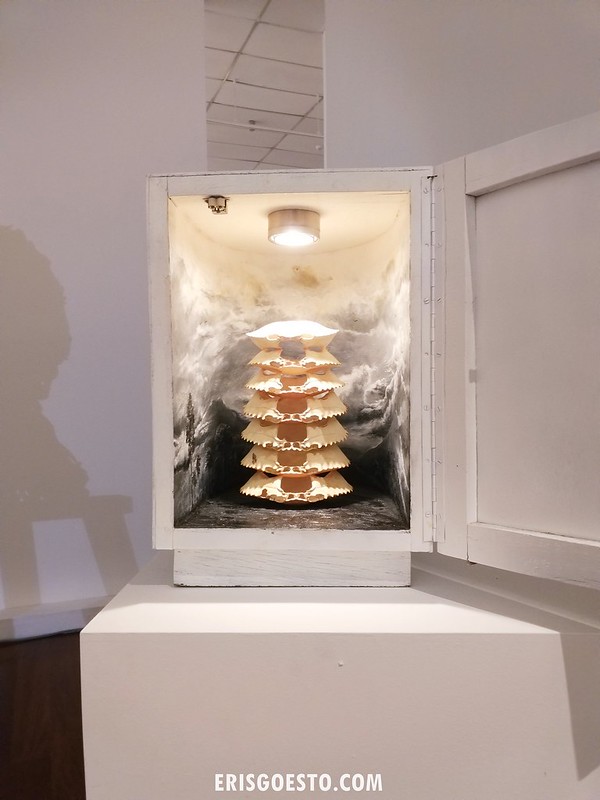 Clever use of objects like crab shells to create a pagoda-like shrine. 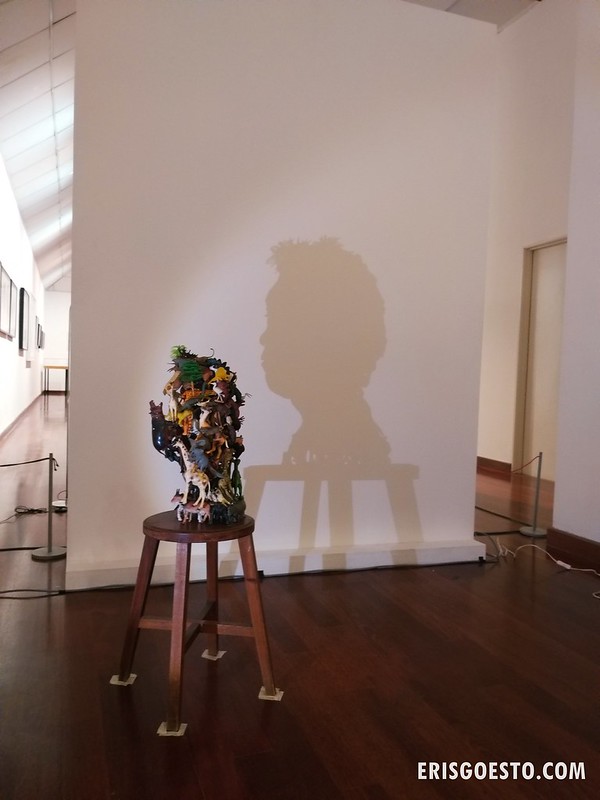 Animal figurines assembled to form an outline of the artist’s silhouette against the light. 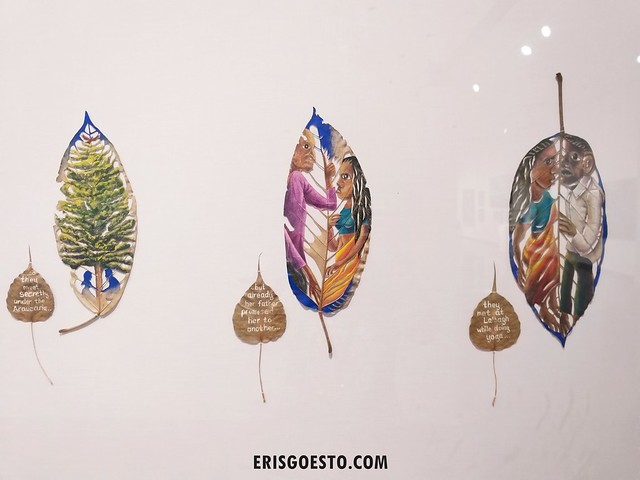 Leaves used as a visual storytelling medium. This series is called The Botany of Desire, made with leaves gathered while Chang was completing his artist residency in Bangalore. The story is about a girl forced into an arranged marriage by her family, and aims to depict Chang’s stereotypical ideas about India from bits and pieces of Tamil and Hindi movies he watched in his younger days, as well as his observations during his residency. 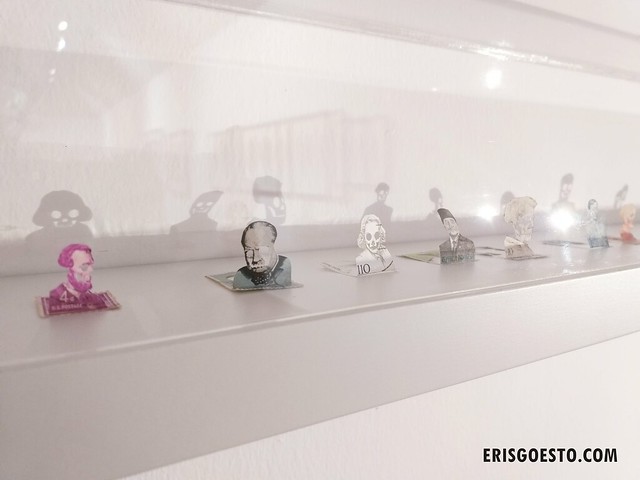 Paper cutouts of famous figures made to look like skulls. I would like to interpret this as ‘everyone dies in the end’ no matter how powerful or popular you may be. 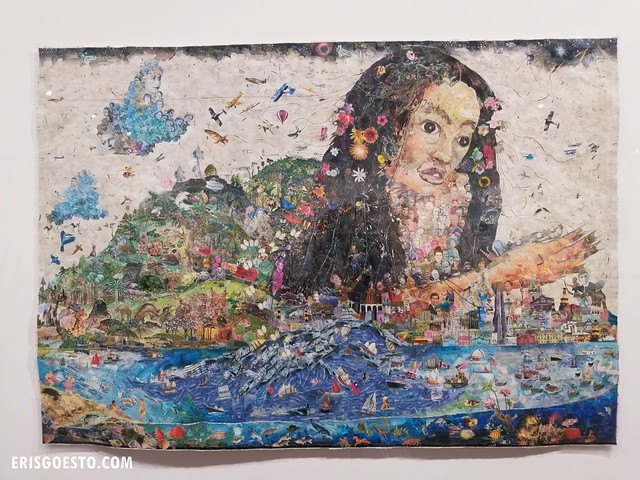 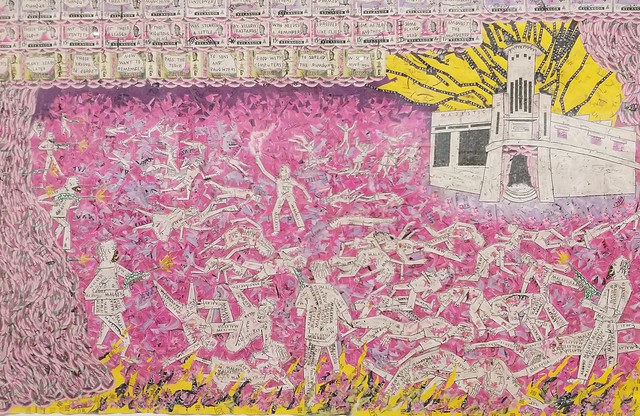 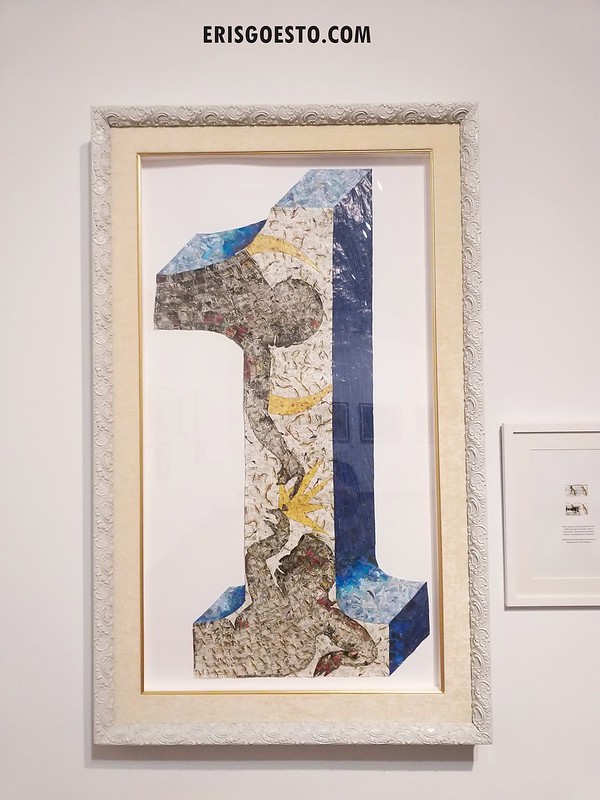 A more recent piece that pokes fun at corrupt political figures who are just now being brought to justice. Diamonds are Forever, 2013. 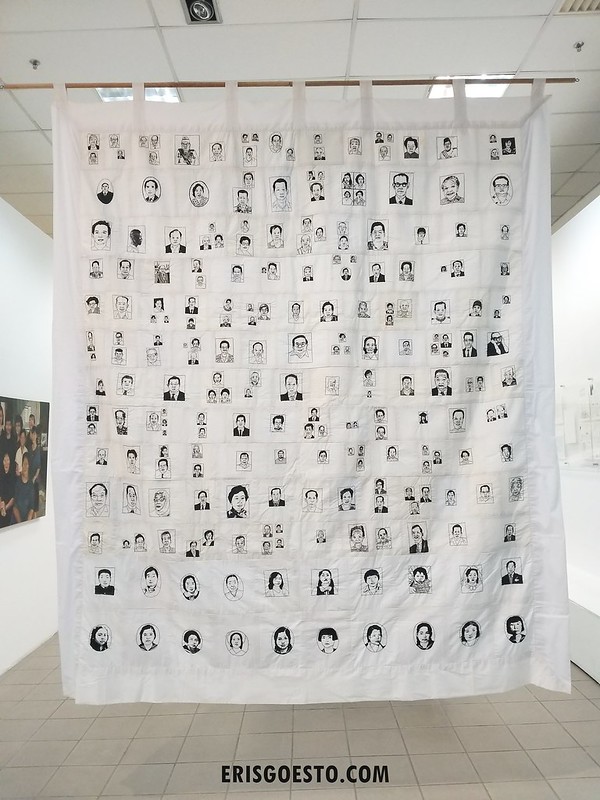 Another one of Chang’s pieces is the Quilt of the Dead, sewn with faces of the deceased taken from obituaries. 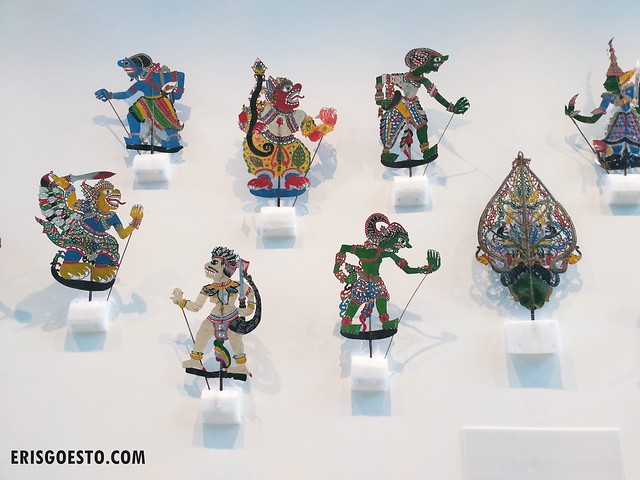 Brehi: Kelantan Under The Skin (running until 3 February) explores the art of shadow puppetry in the state of Kelantan. Shadow puppets or wayang kulit have long been used as a form of entertainment in many parts of Southeast Asia, and often feature mythical or moral characters and stories, a form of oral tradition handed down through the generations. 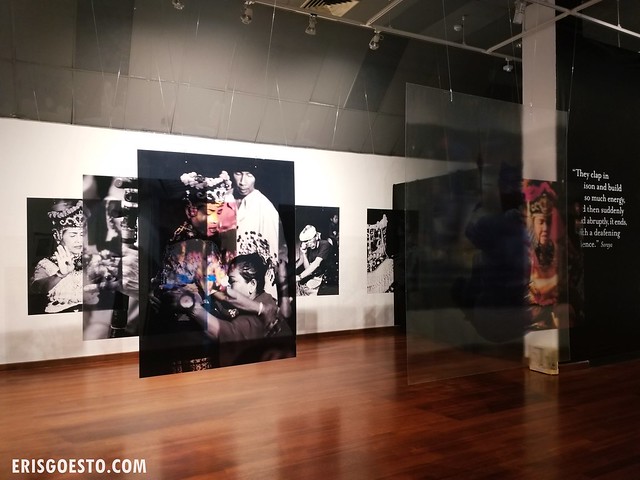 In short, the National Art Gallery is a great place to discover Malaysian art, and it’s also a nice spot for relaxation and a few quiet hours away from the crowds at KLCC and other touristy areas. Best of all? Entrance is free.