Like most of my ‘projects’, my first time making DIY scented candles started with a whim: I had a long Christmas break and thought it would be fun to make my own candles at home. Lazada sells convenient candle making kits, most of which are from China. I ordered them in early December, and they came just in time for Christmas!

Although I like artsy stuff, I am not someone who is skillful with my hands – I’m clumsy af, so I suck at things like sewing, weaving, painting, crocheting, embroidery, etc. Fortunately, making candles is relatively easy, or at least easy enough that even I couldn’t mess it up too badly.

The kit cost me RM65, and came with everything I needed to make eight medium-sized candles, including metal containers (they sported bright, colourful designs), cotton wicks, four packets of soy wax (200g each), a stainless steel jug for melting, sticky tape to fasten the wick to the bottom, wick holders to keep them in place, a stirring spoon, dye blocks as well as four bottles of 10ml fragrances. I think it’s a reasonable price, as after making the candles I still had a lot of wicks left over, and I since I can reuse the equipment, I’d only need to buy wax and fragrances the next time I want to make candles.

I didn’t want the kitchen smelling like fragrances, so I used the portable butane stove we usually reserve for hotpots. Didn’t have a big stainless steel pot either, so I used a clay pot (necessity is the mother of invention) to double as my boiler. The jug should not be heated directly over the flame as the heat would be too intense for the wax, which would cause it to scorch. Using another pot filled with water helps to ensure a low and steady temperature.

While waiting for the water to boil, I trimmed the cotton wick and fixed it to the bottom of the container using the included sticky tape. The wick holder can be placed across the top to hold the wick in position when you pour.

Using the spoon, I stirred the wax until it was completely melted.

Professionals who make candles to sell usually use a thermometer while making their candles, since different types of wax (beeswax, soy wax, paraffin) have different melting points. As I didn’t have one, I just winged it (ie making sure the pot wasn’t bubbling too much).

Once everything had melted, I added my desired dye and stirred it until the colour was even. Once it had cooled down a little (but not to the point of solidifying, I poured the mix into the containers.

I made a couple of mistakes here.

Despite the flaws, I was pretty happy with the end results!

I had four scents: lavender, vanilla, rose and lemon. The scents were actually quite pleasing when I held the candle up to my nose, but as I mentioned, I think I put them in too early so when I lit the candles I couldn’t smell much of the fragrances.

Making my own candles was surprisingly fun (although it did take me three hours and my back felt extremely sore from having to sit on a low stool – sorry lah I’m old lol) , and I did feel a sense of accomplishment even if they didn’t turn out perfect. Maybe once I’ve had a couple more practice runs, I can start making more luxurious candles – like those pretty ones with flowers and stuff.

Have you tried making your own candles? Share your tips with me below!

It’s Day 4 of the Restricted Movement Order in Malaysia. Things have been pretty uneventful in the house – been spending it working on stories, doing some part-time writing gigs, catching up on games (playing Shin Megami Tensei Devil Survivor rn) and sorting out some old photos. It’s difficult to keep away from negative news when my dad has been tuning in to the TV 24/7. Of course everyone is feeling worried about the recession hitting (which I’m sure it will with how things are going), but there’s nothing we can do about it now except play our part and hope that things resume some normalcy in the coming months.

But enough doom and gloom. I made some food! 😀

PS: I’m not the best cook, but I survived living on my own while I was at uni in the UK, so it’s not like I’m terrible at it or anything lol. But don’t expect gourmet-level recipes.

Longevity noodles, also known as e-fu noodles, are soft and silky wheat noodles that are often eaten at celebrations such as birthdays and weddings, since they symbolise longevity and prosperity. The strands are long and thick with a slightly chewy texture. You can easily get them at most Asian grocery stores. We had some leftover roast chicken from lunch, so I thought of tossing some ingredients together to make stir-fried noodles. 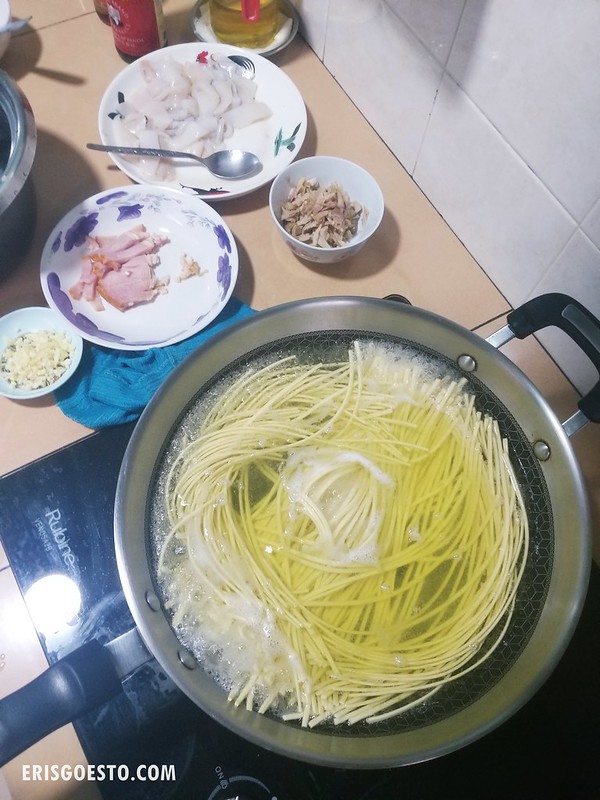 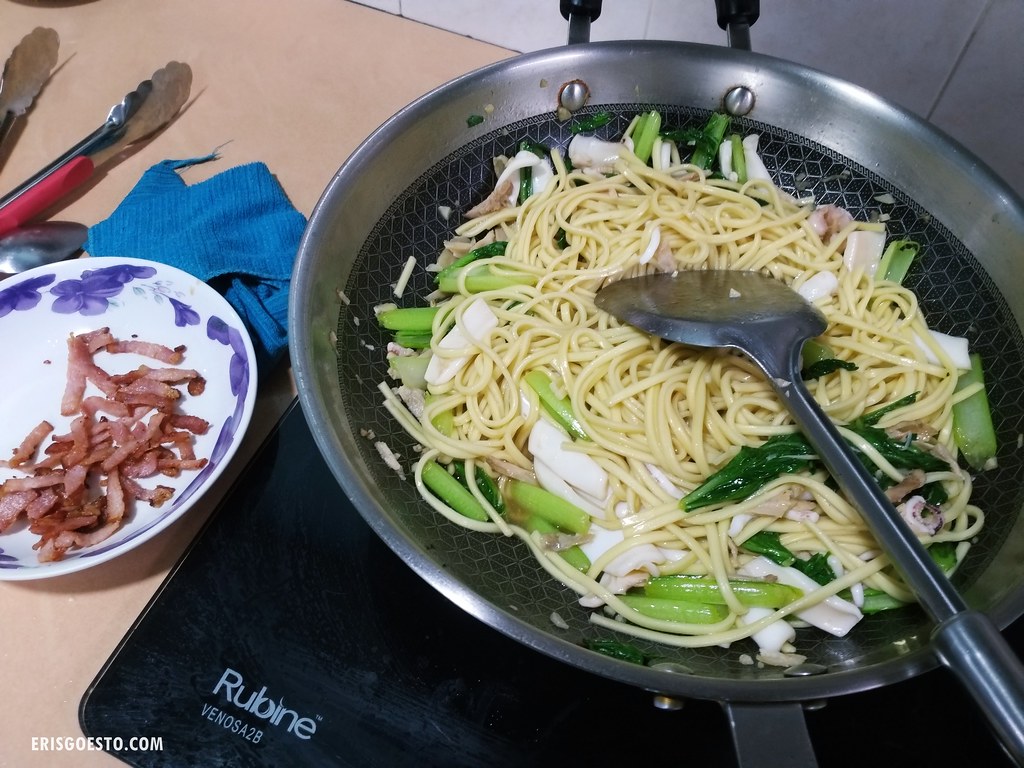 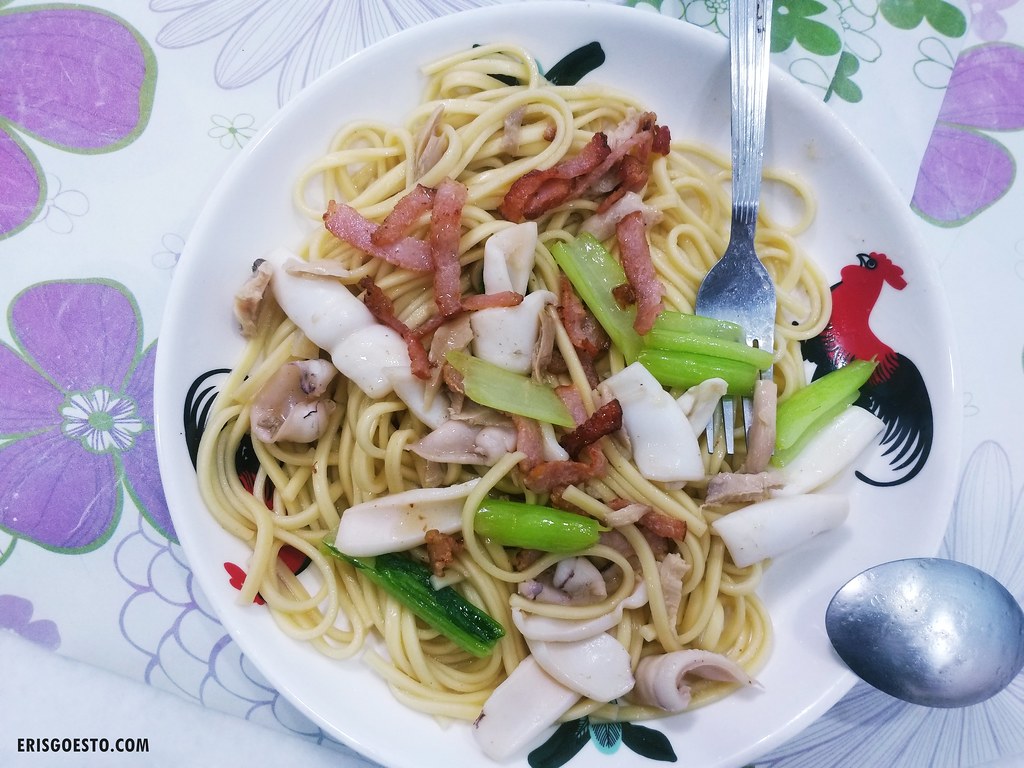 It was quite tasty, if I do say so myself. lol

Getting fresh ingredients might be harder if the restricted movement order keeps up (some wet markets have been ordered to close since they can’t implement crowd control), so we’re trying to make fresh and healthy meals while we can, before resorting to canned / instant food.

I hope everyone is holding up well, wherever you are. If you do have access to fresh ingredients, then this is a great time to hone your cooking skills. Stay safe and healthy! 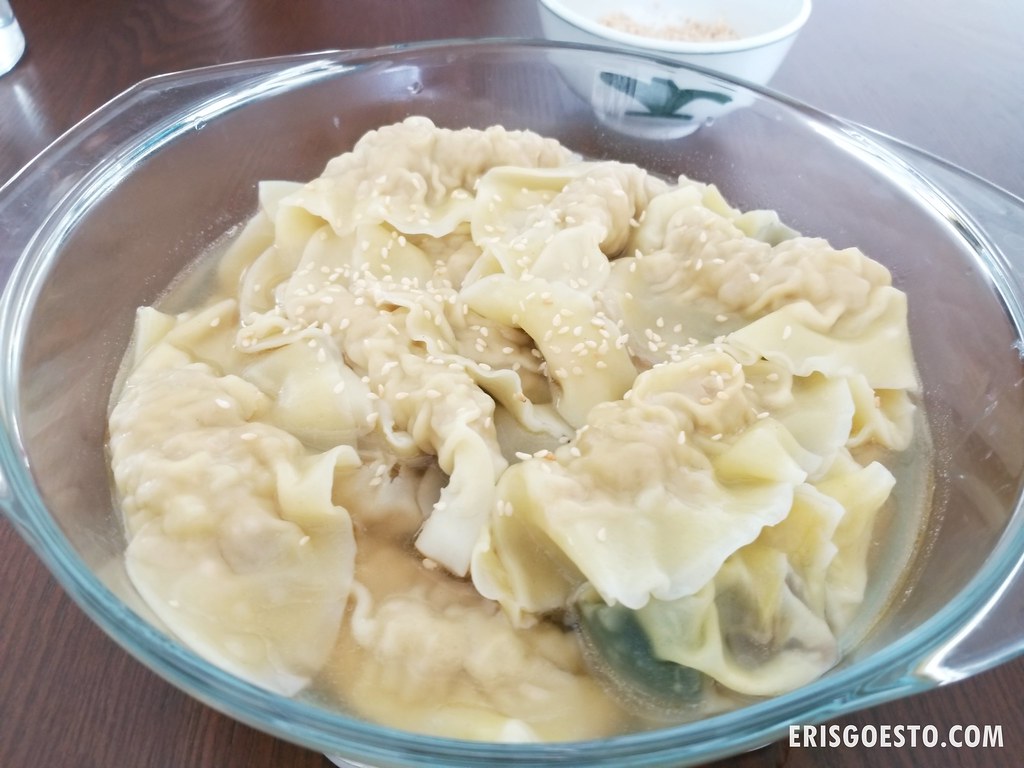 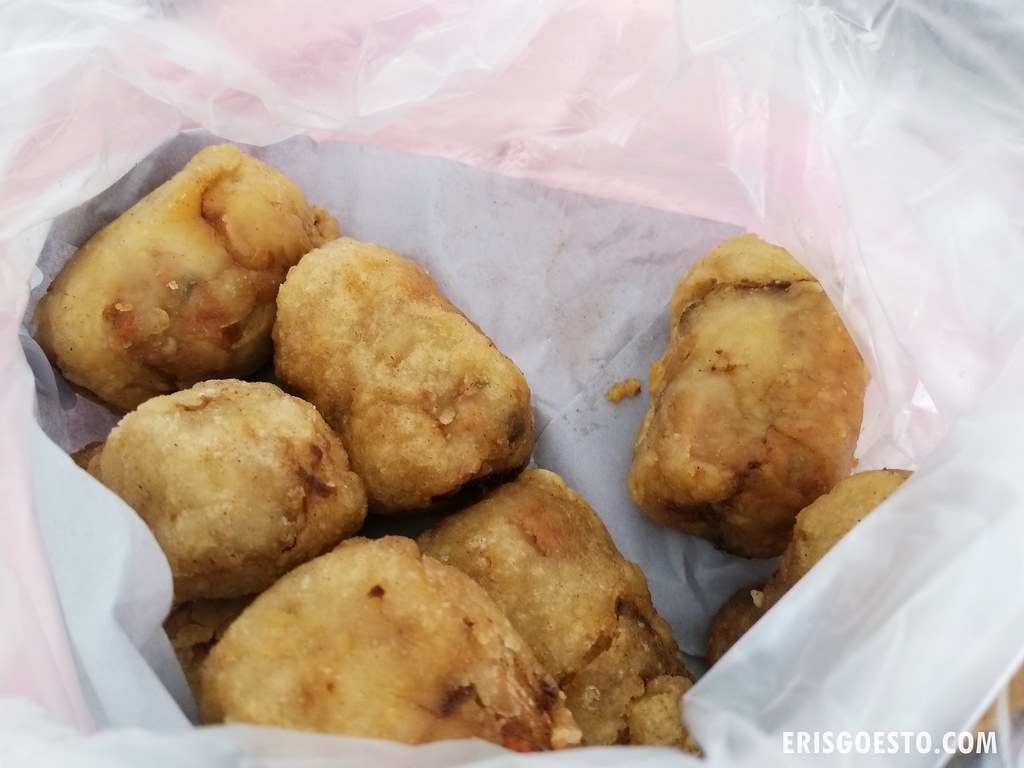 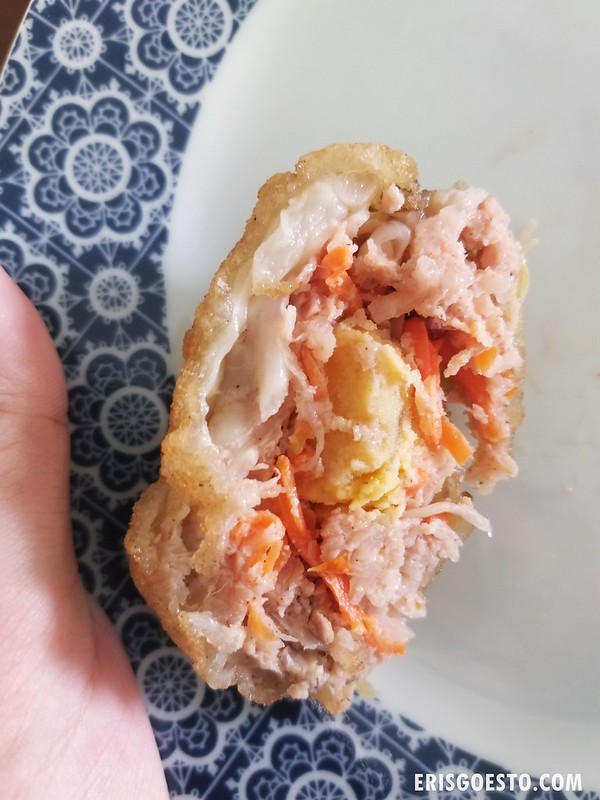 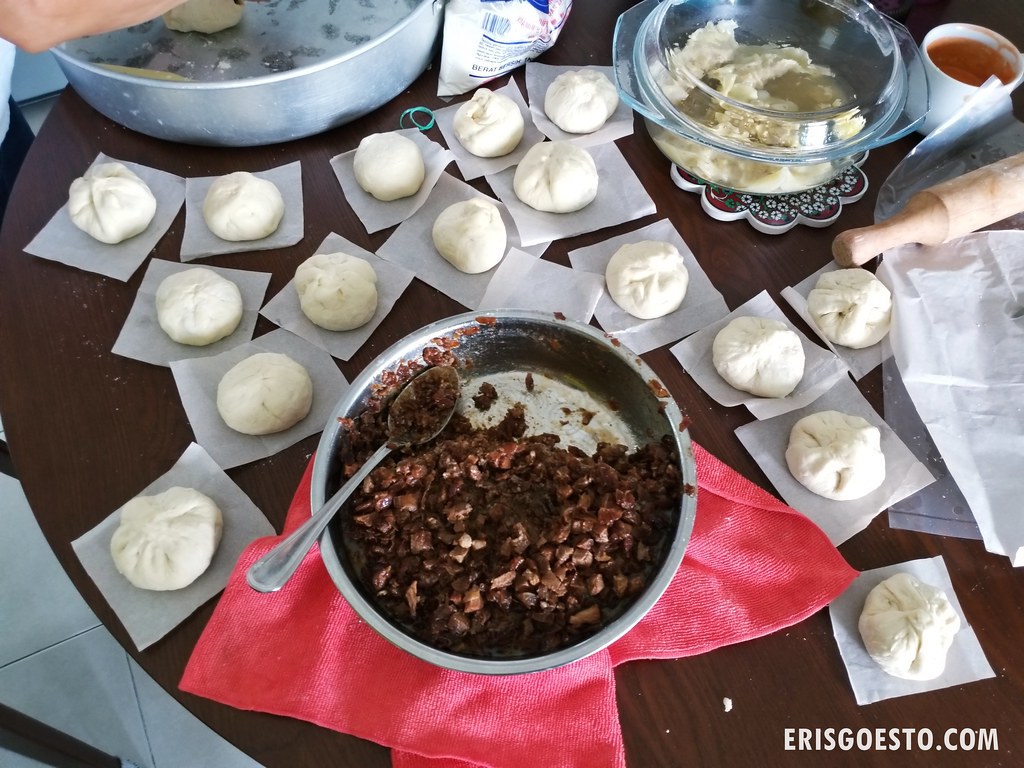 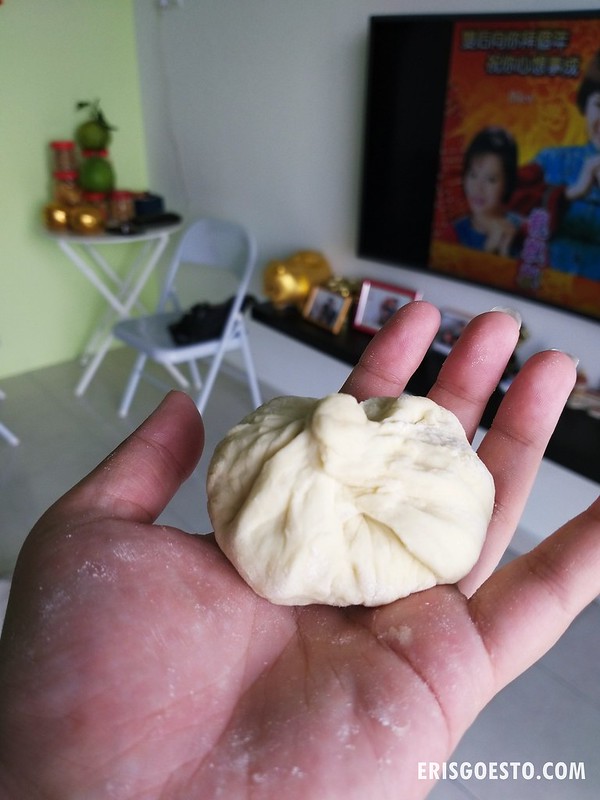 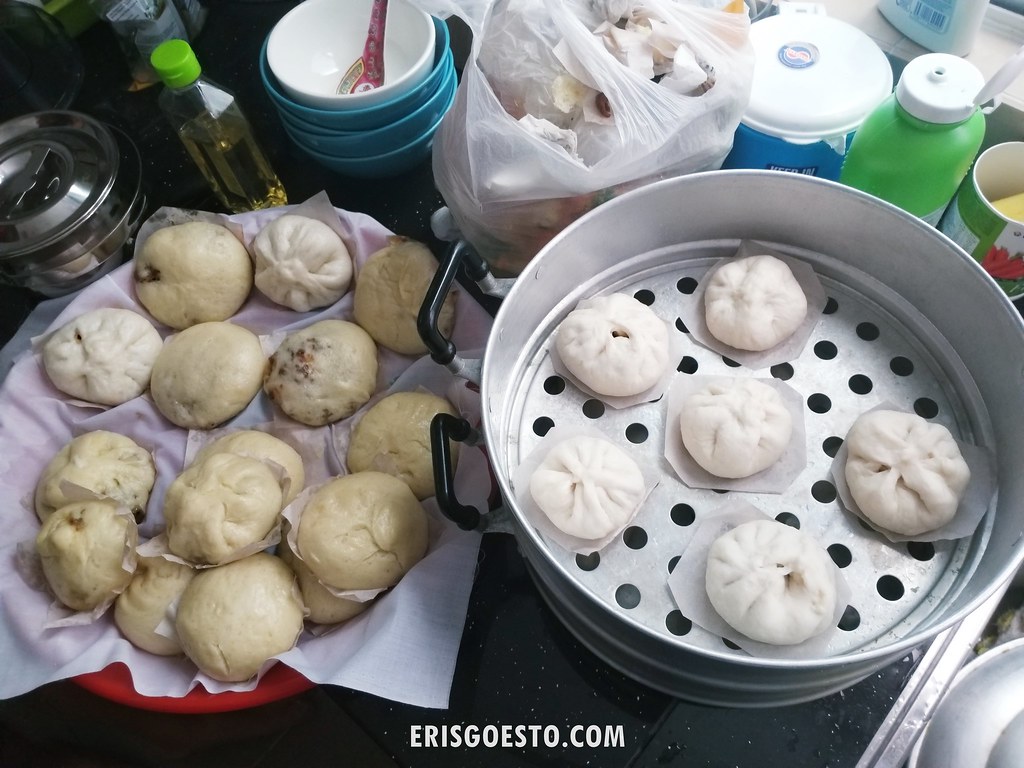 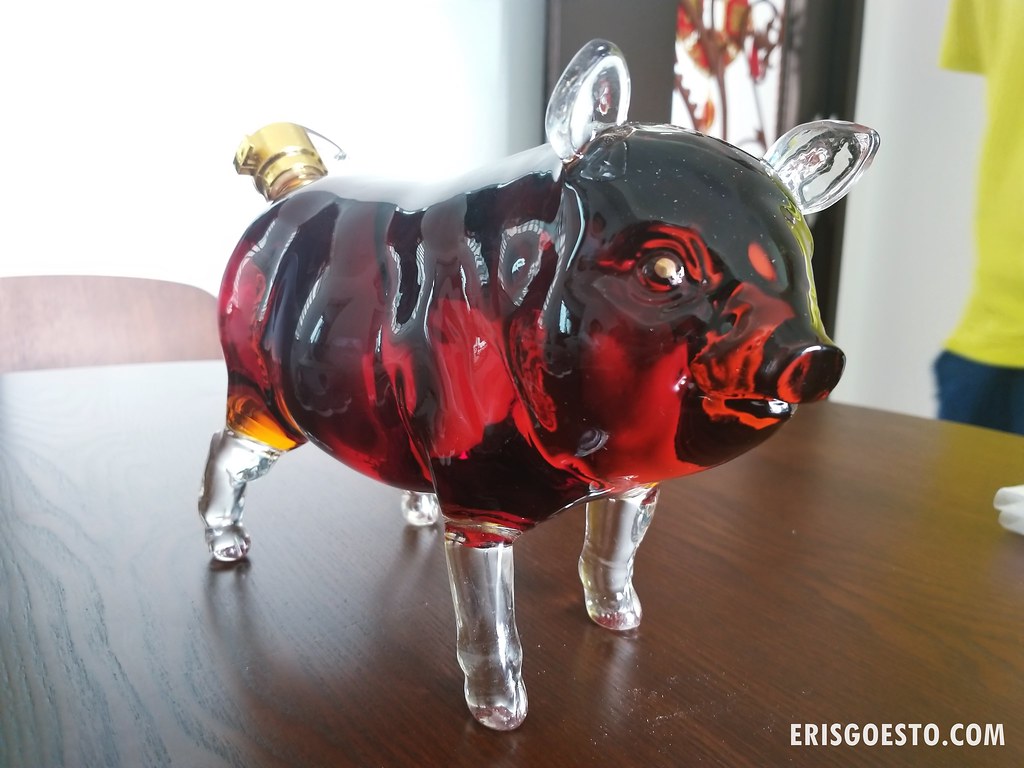 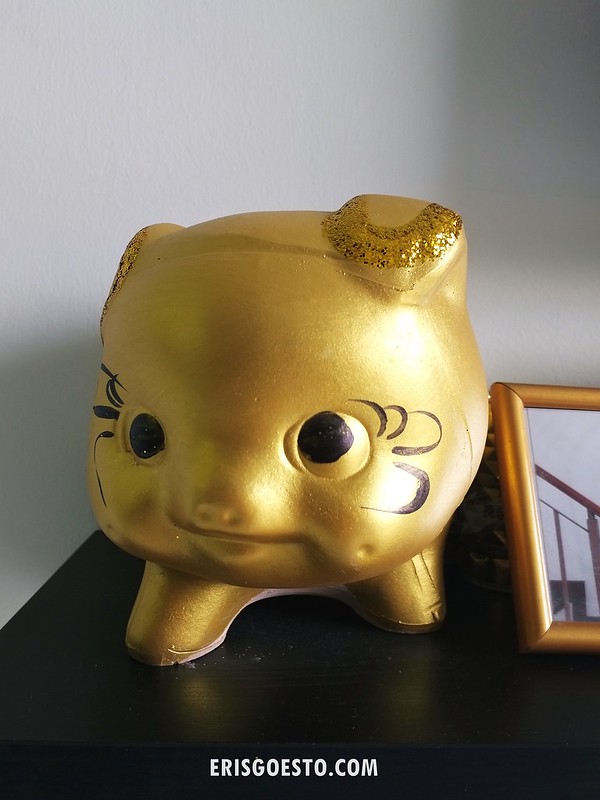 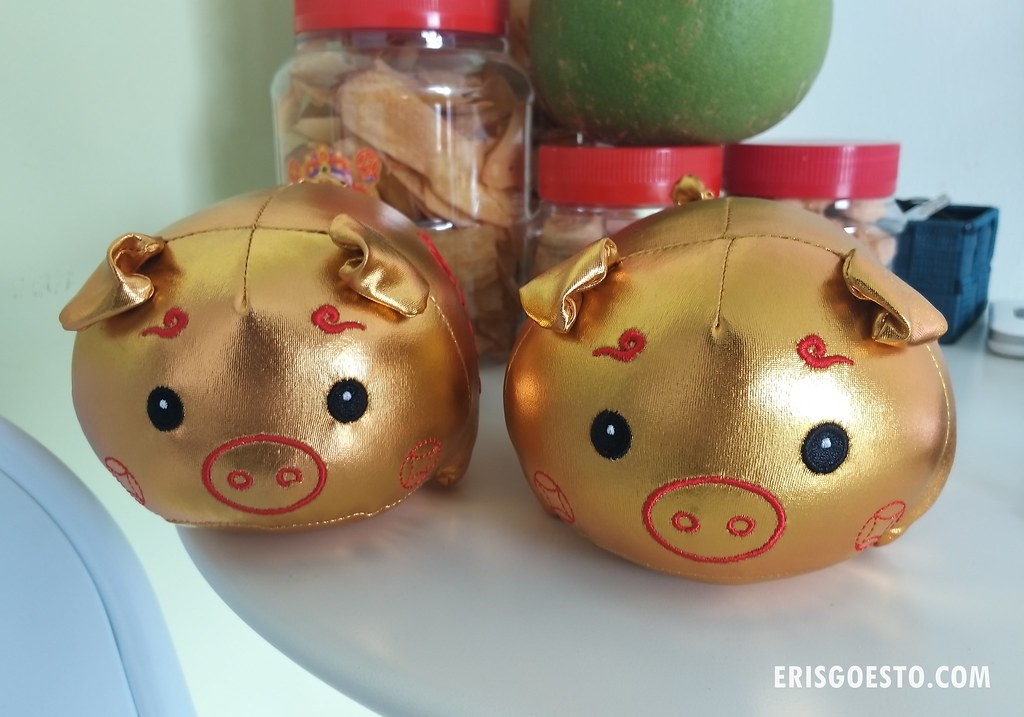 It was my day off and I was feeling hardworking over lunchtime so I decided to make my own food. I don’t cook often because the kitchen is my mum’s domain and I always get shooed out for ‘making a mess’ (and then she complains that I don’t know how to cook). 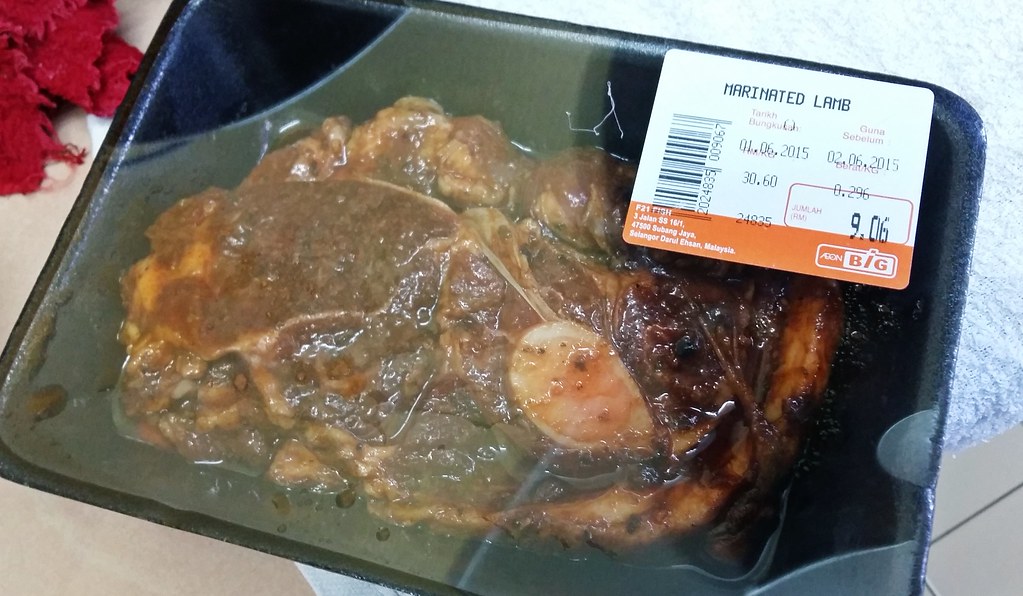 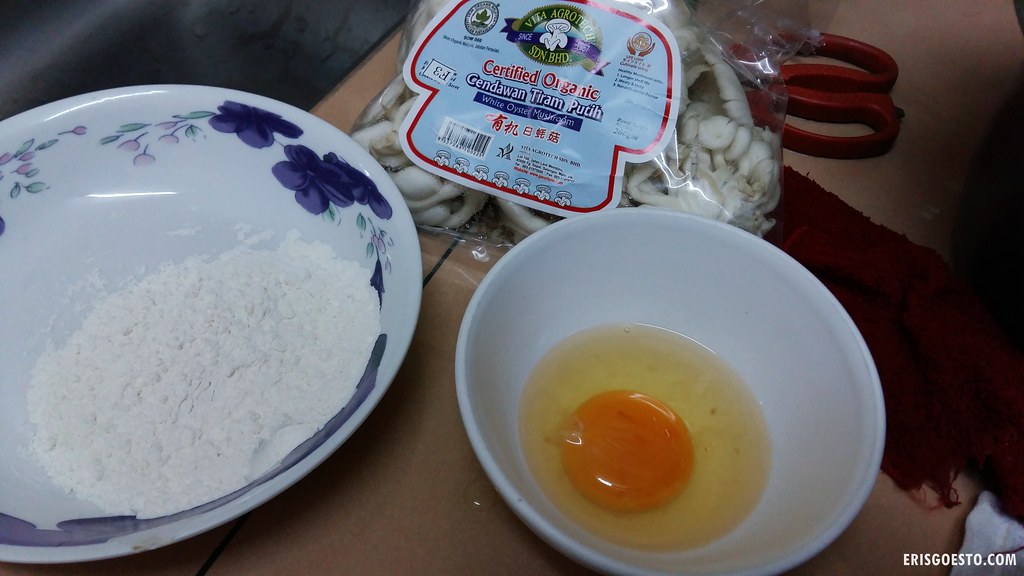 Made fried oyster mushrooms as a side dish. Dipped the shrooms in beaten egg before fluffing them over with fried chicken powder. 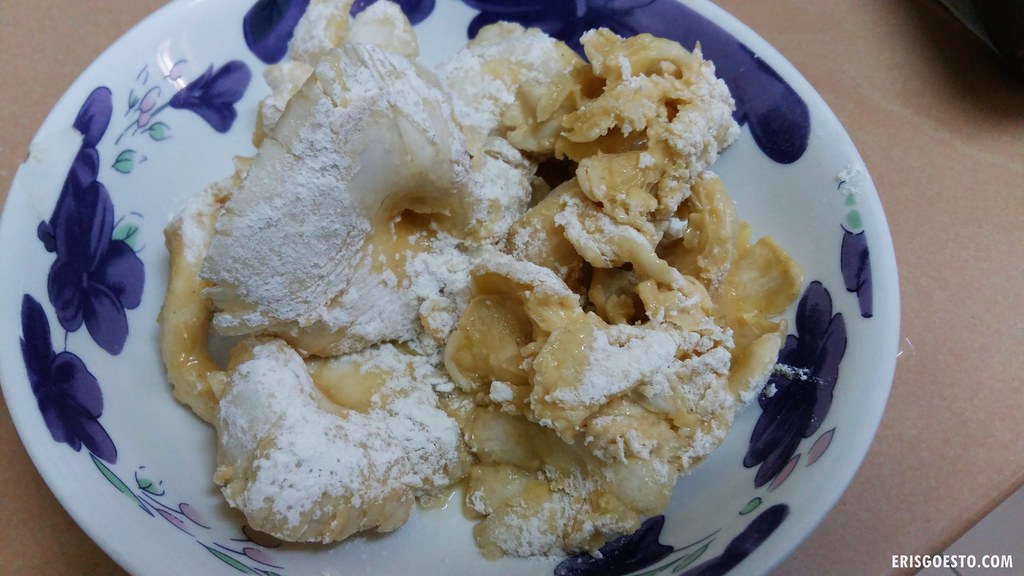 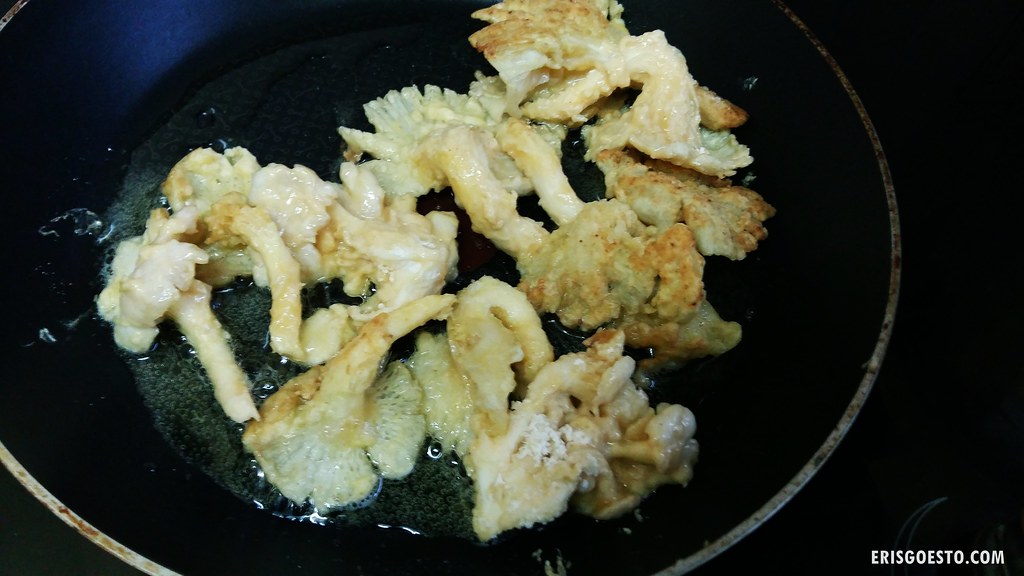 I don’t have a deep fryer, so the frying pan was the best that I could do. I went by estimates so I took them out when they looked cooked lol (they were). They turned out surprisingly well! 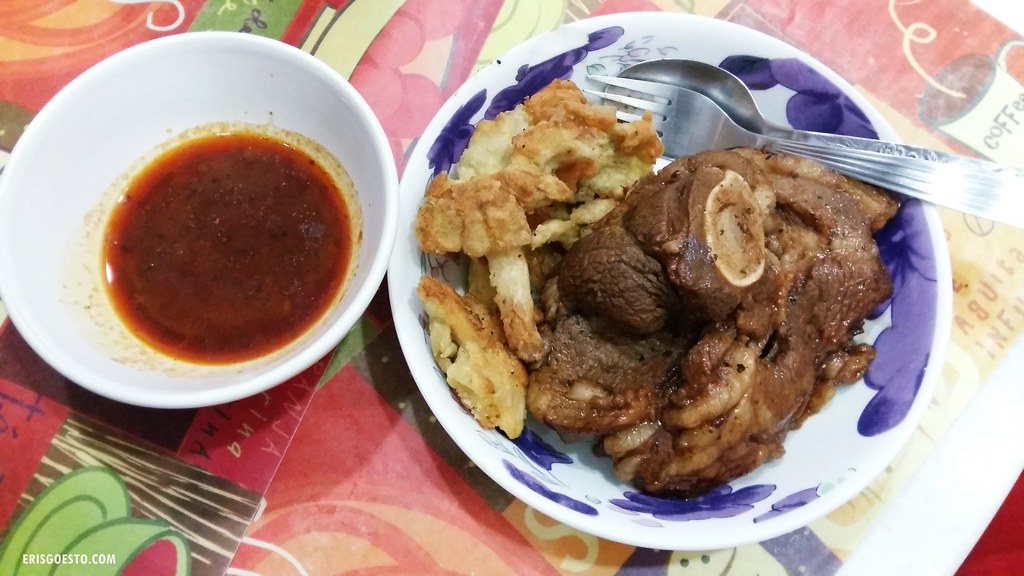 For the chops, I first thought of grilling them but then decided it would take forever so I poured some water in and covered them for 10-15 minutes. I was again surprised when I plated it because it wasn’t overcooked or undercooked – the powers of winging it. lol 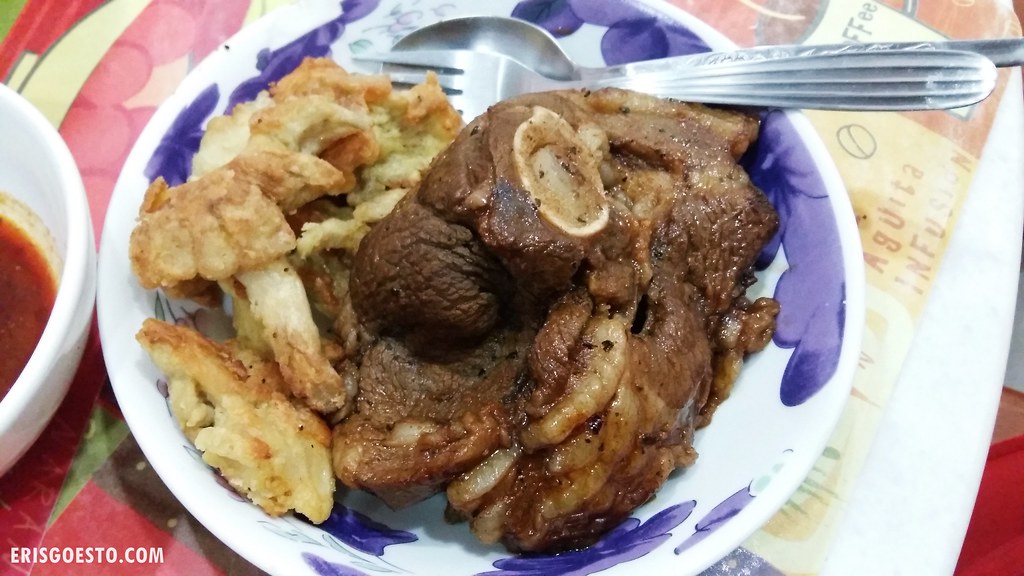 Didn’t have much of the sauce because it was oily. But the meat and mushrooms turned out decent! Sure, it wasn’t restaurant quality but I’d give myself a pat on the back and a B+.