Americans have their KFCs and McDonalds; Filipinos, their Jollibees. But here in Malaysia, Marrybrown stands proud as a homegrown contender. Founded in 1981 as the local answer to a burgeoning fast food industry, the brand has made a name for itself serving fried chicken and tasty burgers with a Malaysian twist.

I’ve always enjoyed Marrybrown’s fried chicken, which is juicy and has great flavour – but I haven’t had the chance to try out any of their burgers (because I always end up getting the chicken, haha!). The chain recently brought back their limited time only Fortune Burger for the Lunar New Year celebrations, so what better time to check it out? 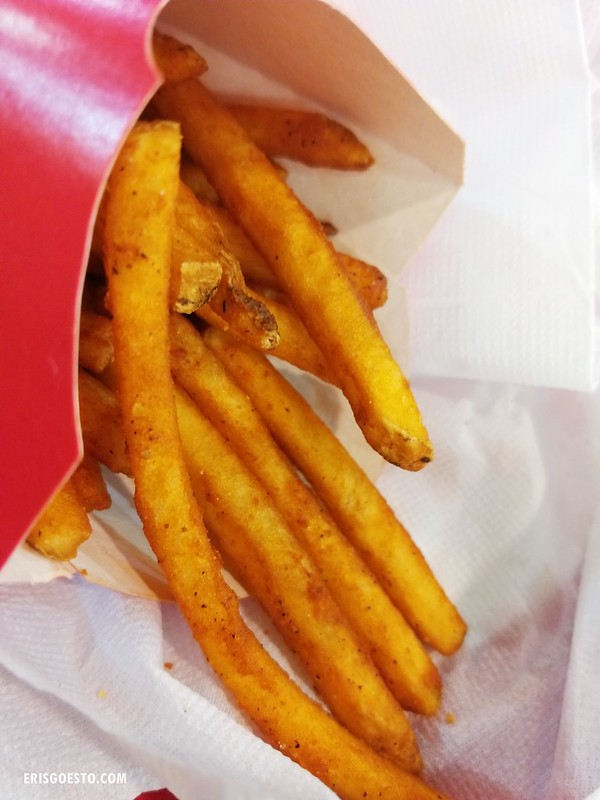 I visited the branch in Puchong Prima. Service was slow as it took almost 25 minutes to get my burger. (when fast food isn’t fast.) The fries came first. They were thin cut and very crispy. In terms of flavour, they were more akin to A&W’s curly fries, down to that salty, peppery taste. Good stuff. 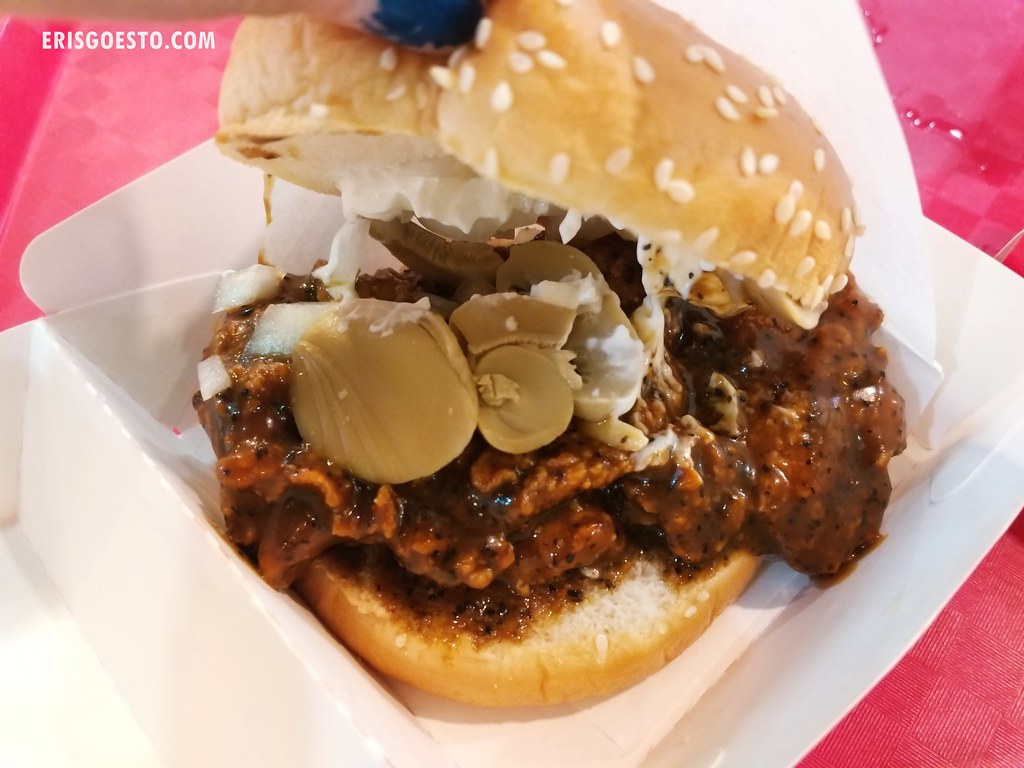 The burger finally arrived, and it did not disappoint.

Deceptive advertising is a pet peeve of mine, especially when it comes to food. I understand that it’s part and parcel of marketing, because there’s no way real food can look as attractive as they do in ads – but I also think there’s a limit to how big of a difference there should be between what’s advertised and the actual product.

The Malaysian black pepper sauce has a very strong and distinctive taste, thanks to the region’s cultural influences and the liberal use of local spices: so you get stuff like oyster sauce, soy sauce, garlic, galangal,  chillies etc. used as the sauce’s ingredients. The black pepper sauce on the Fortune Burger reminded me very much of the cheap but tasty chicken chops that they used to sell in high school – it had almost the exact same flavour. The chicken thigh was also fried to juicy perfection, and despite the copious amount of sauce, still retained a crispy exterior and juicy insides. In my personal opinion, it is way, WAY better than McDonald’s Prosperity Burger.

The Fortune Burger started its run on January 13 so they’re probably going to take it off the menu very soon. Go try it out before it happens! Else, you’ll have to wait for the next year.

There are so many gems (of the gastronomic variety!) to be found in the old neighbourhood of Carlton in Melbourne – especially in its Little Italy district along Lygon Street, which is famed for its pizzerias, alfresco dining cafes, bakeries and Italian restaurants. For stout dairy devotees, a must visit while in this part of town is La Latteria. Don’t let its humble-looking facade fool you: the place has its own ‘Mozzarella Laboratory’, and churns out fresh cheeses that are hand-stretched and shaped here daily, in addition to milk, yoghurt, cream, hams and other goodies you’ll find on a table in Italian homes.

Upon entering, we were greeted by a beautiful display: slabs of cheese wheels, round balls of fiore di burrata and buffalo mozzarella soaking in brine, olives, peppers, as well as stacks of sausages and hams. Hailing from Malaysia where knowledge of ‘popular’ Italian food is generally limited to things like pizza and pasta, I was glad that the outlet’s friendly proprietor, Katia, had the patience to walk me through some cheesy terminology:

Cheeses at La Latteria are freshly made from pasteurised milk sourced from Melbourne’s surrounding Victoria region.

We tried the latter three, served on a wooden chop board with thin wafers. The Fiore de Burrata, made from buffalo milk rather than regular cow’s milk (it’s supposedly lower in cholesterol and rich in vitamin A) was my favourite – the ball had a soft, bouncy texture and a fresh creaminess that was not cloying, while the centre was oozy, light and savoury. Eaten cold, it was super addictive even on its own. Similarly, the ricotta was rich in flavour but light, with an airy texture: perfect for desserts, pastries or added on pastas. The pecorino was good, a bit on the salty side, but then again I’ve always preferred squishy, chewy cheeses over hard ones.

Tempted to bring some of these goodies home, but I still had a couple of days to go around Aus and storage would have been a problem. 😛

Still reminiscing on that amazingly light but creamy flavour of the burrata as I type this *drools*.

Update: This branch is now permanently closed.
Despite it being one of the pioneers when Setiawalk Mall opened in Puchong, I’ve never been to the Wong Kok Char Chan Teng branch there. Maybe it’s the darkly lit interior, which doesn’t look as inviting as the boisterous Japanese and Korean restaurants clustered near the fountain area.

S and I went to grab dinner before our movie and we were craving Hong Kong food, so we finally decided to give this a try!

They have a very extensive menu with over a hundred items – can be a bit dizzying for someone dining here for the first time.  Aside from traditional noodle and rice dishes, they also serve fusion cuisine like cheese-baked rice/spaghetti, stir-fried spaghetti, toast and snacks. For drinks, you won’t go wrong with the HK-style milk tea. Bonus: If you come on your birthday and show IC as proof, they give you this giant milk tea that you can share with friends (or if you want to drink it by yourself it’s fine too lol).

When I mean giant I mean GIANT. Like this:

S had the baked cheese rice with chicken chop. The food came served in a wooden steamer, wrapped around with aluminum foil. We could see the generous layer of cheese bubbling at the surface.

I wanted carbs without the rice, so I opted for cheese baked seafood angel hair pasta with special sauce. The sauce turned out tasting like mild curry, the cheese was gooey and soft, and the pasta portion was generous, as was the seafood – crab meat stick, shrimp, fried fish fillets (admittedly these were a bit soggy since they had been fried and then baked).

The meal wasn’t half bad, and came up to about RM50 for the two of us.

Update: This outlet is permanently closed.

So there’s a viral post going around the Internet about this place selling cheesy croissant Taiyaki in SS15, Subang.

DAT CHEEZE. How does one even resist?

S and I went to check it out after work last week and got the Double Cheese Taiyaki which they’re famous for. It looked a lot different from the pictures, lol. This is why people put that ‘for illustration purposes only’ disclaimer, kan?

Despite looking quite flat and sad, the taiyaki was actually filled with a lot of cheese! Best eaten hot so you get that oozy and soft but stringy texture. The croissant wasn’t too bad either – flaky and crunchy.

They also have other varieties like ham N Cheese, red bean and chocolate. Or go for the waffle series instead of the croissant ones; they come topped with ice-cream.

Obviously we weren’t full enough, so we walked over to Asia Cafe for siew loong bao. Used to have these often with my ex, sure brings back some nostalgic memories.

And fried oyster mushrooms. A tad too oily.