Despite being Buddhist, my family has never been devout. We have an altar at home dedicated to Guanyin (the Goddess of Mercy), and make offerings at temples during religious occasions – but they mostly stem from tradition, because these were practices handed down by our ancestors.

Lately, my mother has become increasingly spiritual. She is going through a hard time, what with old age, illness, and the inability of medicine to help alleviate the pain. I’d like to believe that religion has given her some comfort – but we’ve also advised her on the dangers of superstition, as there are many charlatans out there preying on the desperate. 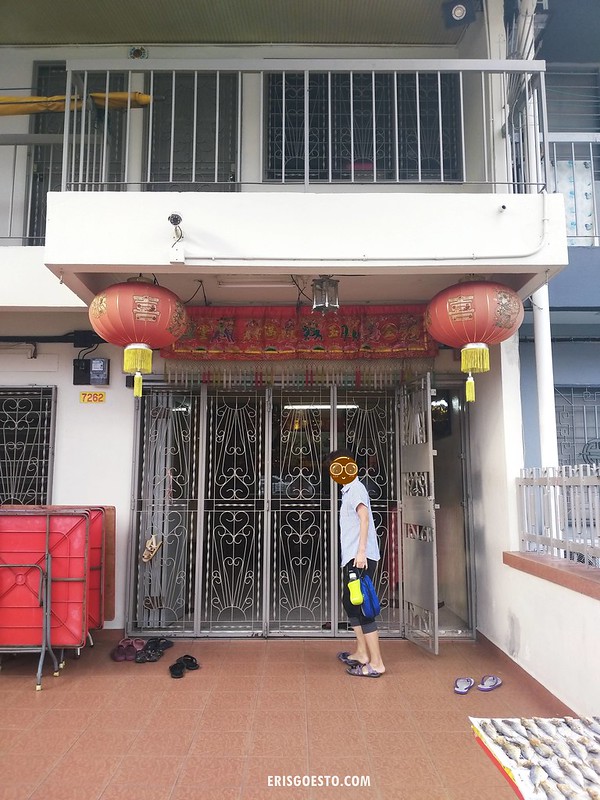 On the recommendation of a friend, she went to seek blessings for an upcoming surgery from a medium in Selayang, Kuala Lumpur. The ‘temple’ turned out to be a double-storey terrace house in a quiet neighbourhood, hardly distinguishable from the rest of the houses if not for the giant brick furnace outside (for burning offerings) and several small shrines within the compound. 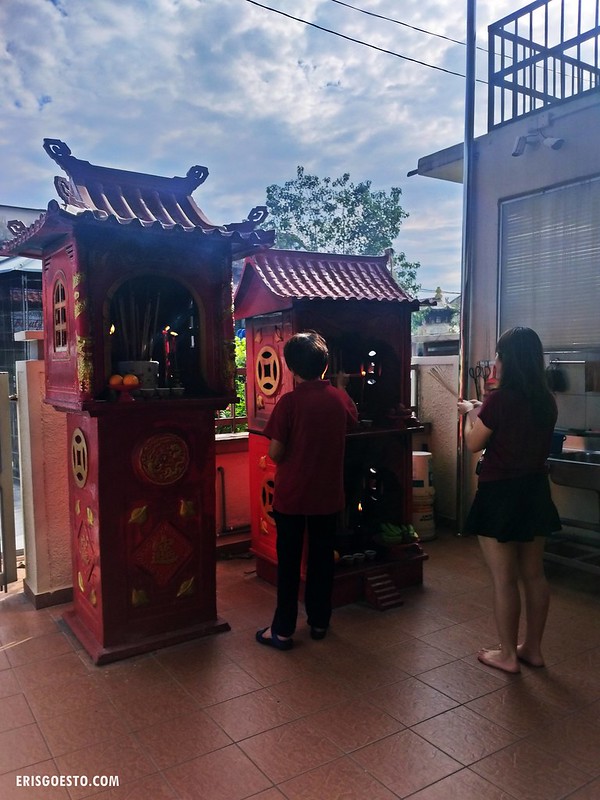 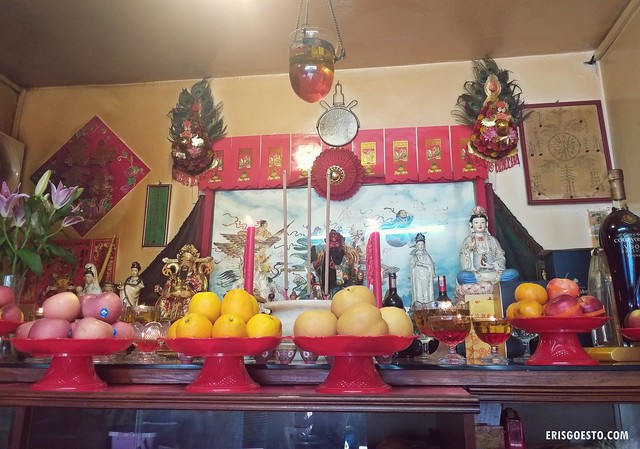 The place didn’t look much like a temple, aside from baskets of paper offerings in a corner. There were several couches at the waiting area and a large wooden altar with Buddhist and Taoist deities. I recognised the main one as Guan Yu, the general-god, and Guanyin. The altar was furnished with the usual trappings; platters of fruit, oil candles, a reflective mirror (for repelling evil spirits) and a tapestry depicting heavenly scenes.

My dad got there at about 7.30AM to get a number, as the medium is very popular. The temple opens at 9.30AM, after which the medium will see you according to the number you have written. 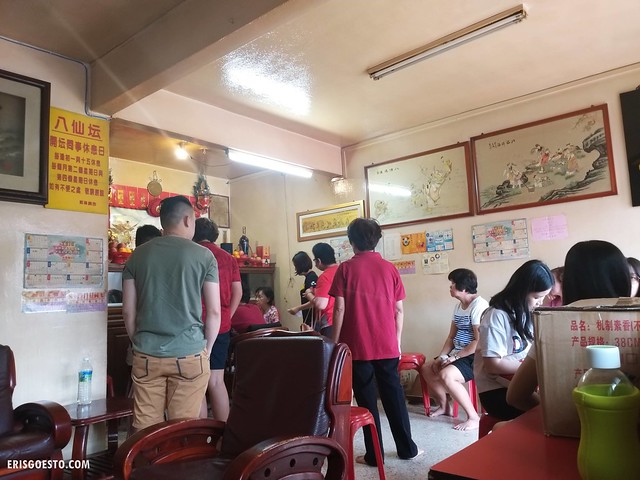 The medium was a curly-haired lady, not much older than my mom. She had a stern face but kind eyes, and a mole almost at the centre of her forehead, like a third eye. If I passed her on the street, I would have assumed she was just another auntie going about her grocery shopping.

By the time 9.30AM rolled around, the temple was already filled with people eager to get a reading, or ask for advice and blessings. I thought that it would mostly be people my mom’s age, but there were many young people as well, some younger than me. Because most of my close friends have agnostic views towards religion, I just assumed that the younger generation did not care much for spirituality. I was obviously mistaken.

The medium here is Taoist and channels Ho Sin Gu (He Xiangu), one of the Eight Immortals in Chinese mythology and Taoist beliefs. She is the only female among the eight immortals, and in mythology, carries a lotus flower that is able to improve one’s physical and mental health.

The medium first invited the deity to enter her body. There wasn’t much pomp aside from some clapping and praying, which was very different from the deity I remembered visiting as a child, when I had seizures. The medium/deity sat at a ‘consultation’ table (reminded me of a doctor or a physician, really). There was an assistant on hand to translate, since the medium spoke in Hakka Chinese. 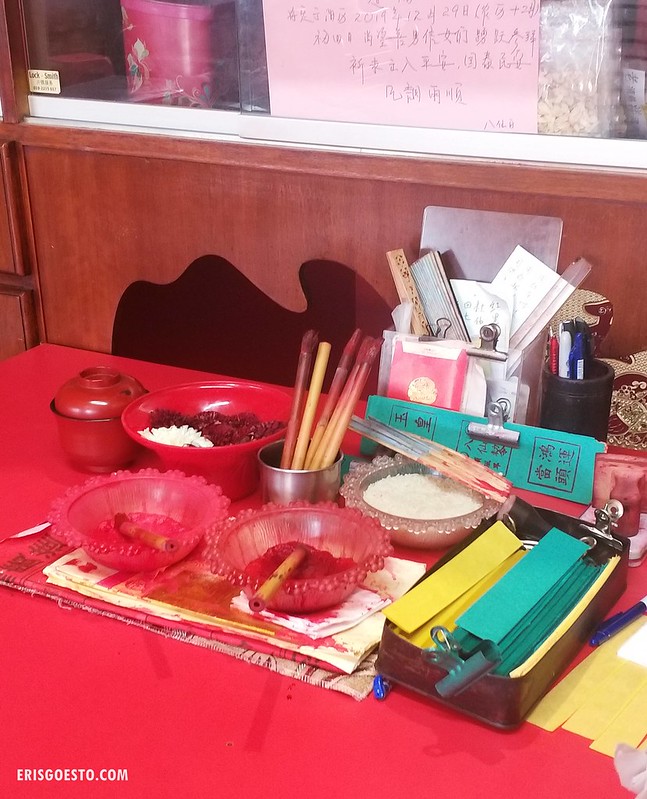 Mom was third, and she asked for blessings for the operation to go smoothly. The medium advised that she should go for it, but it wasn’t going to be all hunky-dory because she foresaw ‘a long and difficult time’ for my mom’s illness(es), and cautioned her to be mindful of her health, avoid stress and look after her intake of food. She then proceeded to write on some talismans in red ink; some of these were to be burnt and consumed, one was to be kept on my mom’s person.

During our consultation, parents with children brought their kids to the medium for blessings. They seemed completely at ease, even going up to the medium and hugging her like a favourite grandma, so I think they come here pretty often. The medium then blessed them with a pat to the head and a stamp of Chinese characters in red ink (presumably a talisman or amulet of sorts?) to their backs.

The consultation took less than five minutes, and there was a token fee – kind of like a consultation fee when you go to the doctor’s. My mom was also advised to consume some pearl powder for recovery, which she bought at the temple.

If you’d like to ask for a reading / blessings, the temple is located at 7262, Jalan Len Omnibus, Taman Selayang Baru, Batu Caves, Selangor.

I’m an INTP, and despite my love for theories (which are intangible), reason often rules the roost – so faith is something I seriously lack.  It is not that I don’t believe in the supernatural or a higher power, it is simply that I don’t believe in much of what makes up organised religion. The reason I call myself a Buddhist is because Buddhist teachings centre around morality, rather than reliance on a higher power. My favourite quote is about how the Buddha only “points the way; but it is you yourself who must walk the path.” There is no ‘if you don’t believe in this, you go to hell’, or ‘you must pray to god to for salvation’. Buddha’s philosophies are about leading a mindful life.

Taoism, a relatively new religion rife with Chinese culture, Buddhist teachings and Chinese folk beliefs, requires a faith in the supernatural which I do not have. That being said, visiting a medium was still an interesting insight and experience, and it is heartening to see the solace and comfort many people find in their beliefs. If it makes things more bearable for them, then why not?

My mom often chides me about my non-belief. “I was like you when I was younger. I felt like I didn’t need god. But when you’re closer to death’s door, you will understand.” Perhaps, but that time has not come. In the meantime, I’m quite content just following what I feel is best, doing and practising good deeds.

PS: Mom had her surgery and is in recovery at the moment.

9 thoughts on “We Went To A Taoist Medium In Selayang”