**I’ve tried to cut down the number of photos to a minimum, but there are still like 20+ because every single one is so cute I MUST put them up lmao.

Having pets have been known to help with stress, but since I can’t keep any at home, pet cafes are the next best thing.

After a particularly stressful day, decided to check out Purradise Cat Cafe in Taman Tun Dr Ismail KL. It wasn’t too far from the workplace, but weekday traffic can be hellish and it still took me an hour to get there. All worries were forgotten once I stepped into the brightly lit, cosy space to be greeted by this sight: 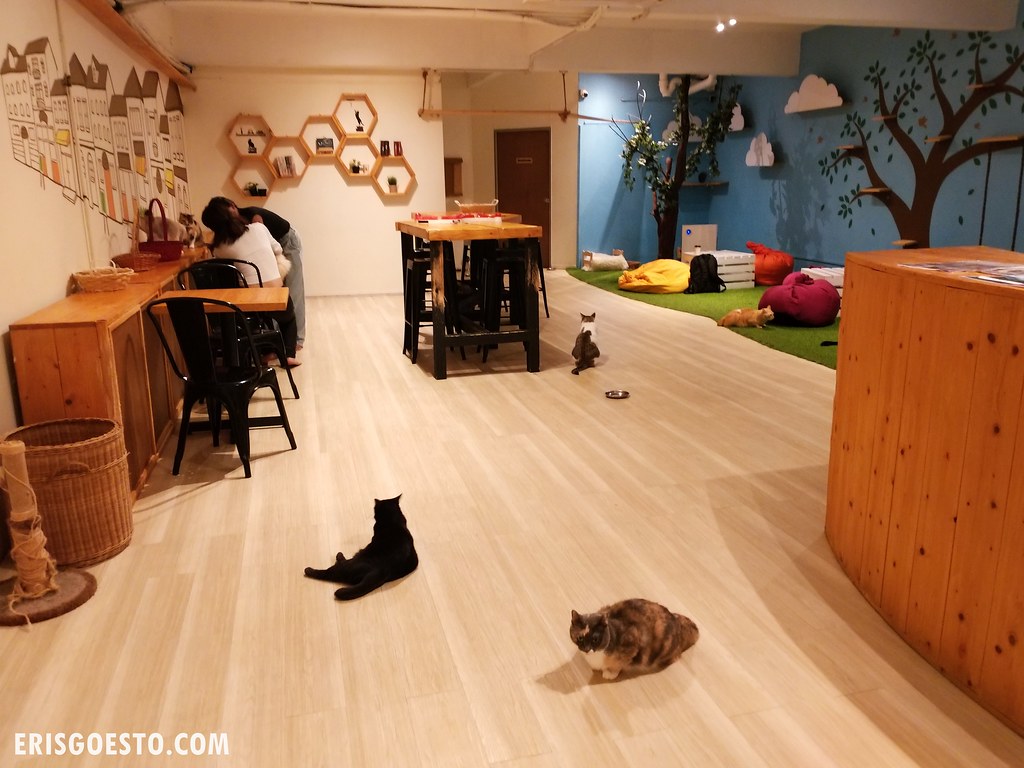 WHY HELLO THERE KITTIES 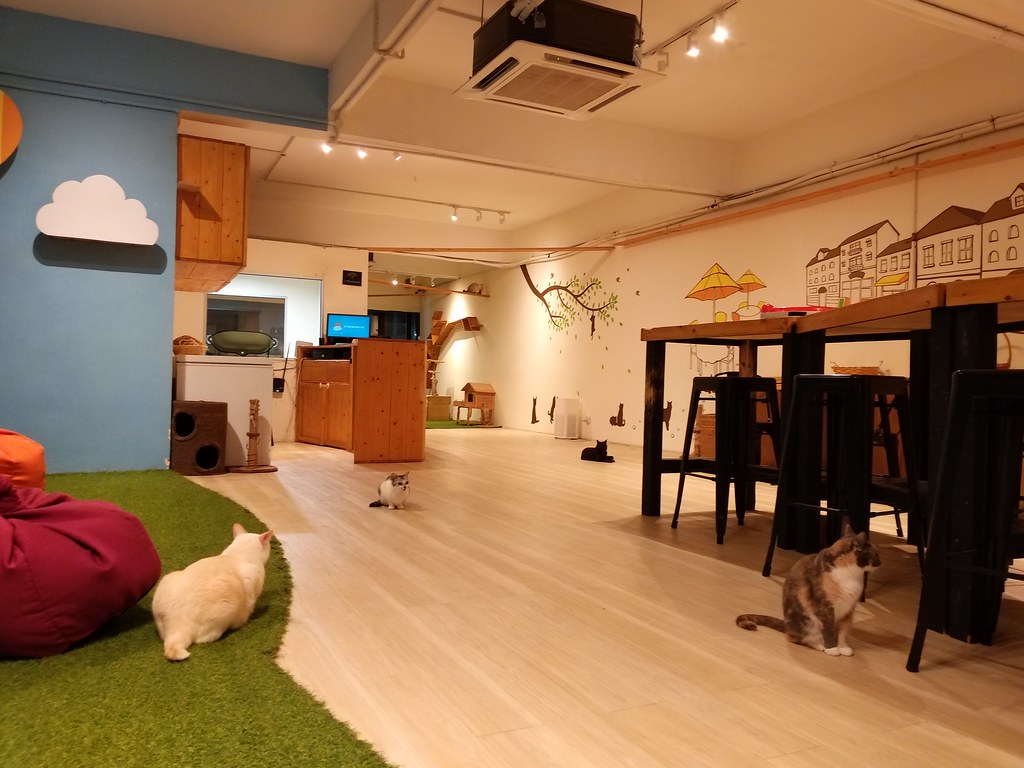 Cat cafes were all the rage a couple of years ago, but many have closed down. Purradise opened in 2015 and is still surviving; although how I’m not quite sure. The place was empty the entire hour I was there – not that I’m complaining because that means MORE KITTIES FOR ME 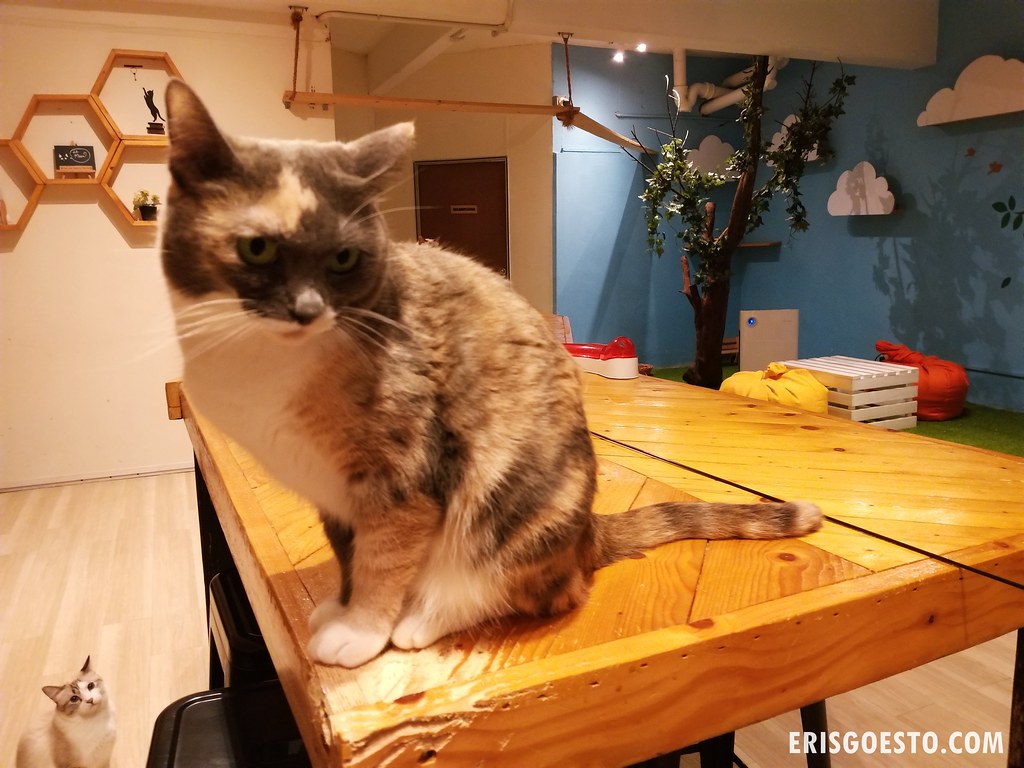 There are more than 20 cats in the cafe, mostly strays and rescues. While the place itself is clean, you do get the sourish odour of cat pee in the air which can be unpleasant for some. I got used to it because the ex had five cats. And a little bit of smell is nothing when you can be around these cuties; am I right or am I right? 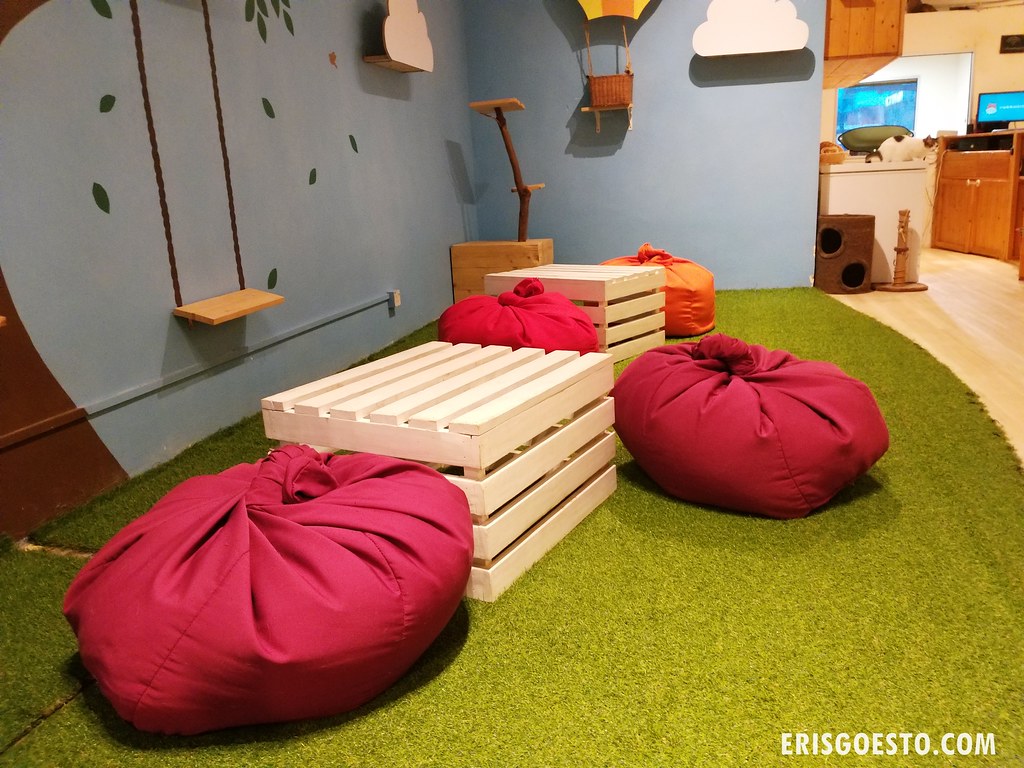 Staff was accommodating and friendly. The manager welcomed me with a smile and a menu for drinks (they’ve got basic stuff like hot chocolate and tea, but no snacks/food), and a ‘menu’ of cats – basically pictures of the resident cats, as she explained which ones I should or shouldn’t touch (there are some that are a little feral). You pay RM18 for an hour + drink, whereafter it’s RM4 for every subsequent 15 minutes (billed after you’re done).

The space itself was bright and cherry, with colourful pouffes, wooden pallet tables, an ‘island’ with tall chairs and plenty of nooks, crannies and beams for the kitties to hop on. 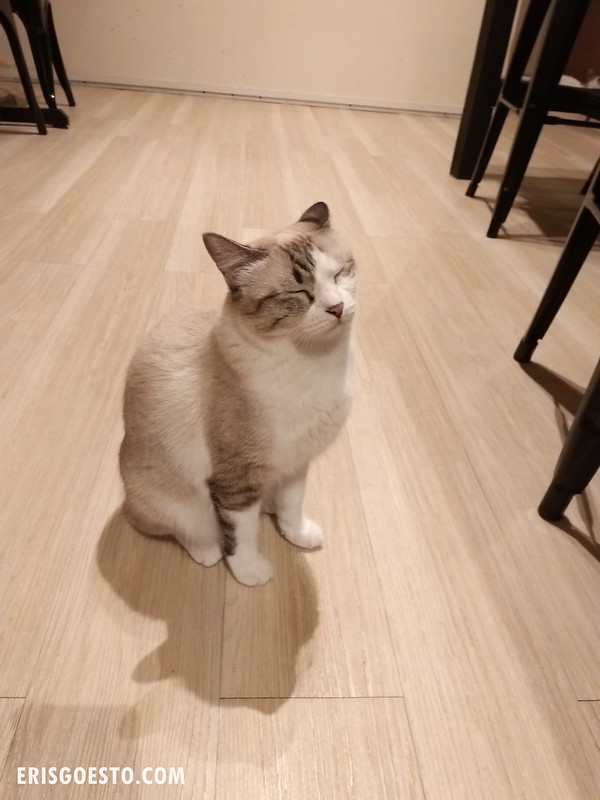 The cats were not friendly and didn’t like to be touched, but it might be because it was close to feeding time and they were all waiting for food. It was calming enough to just look at their antics though – how can you feel stressed looking at this face? :3 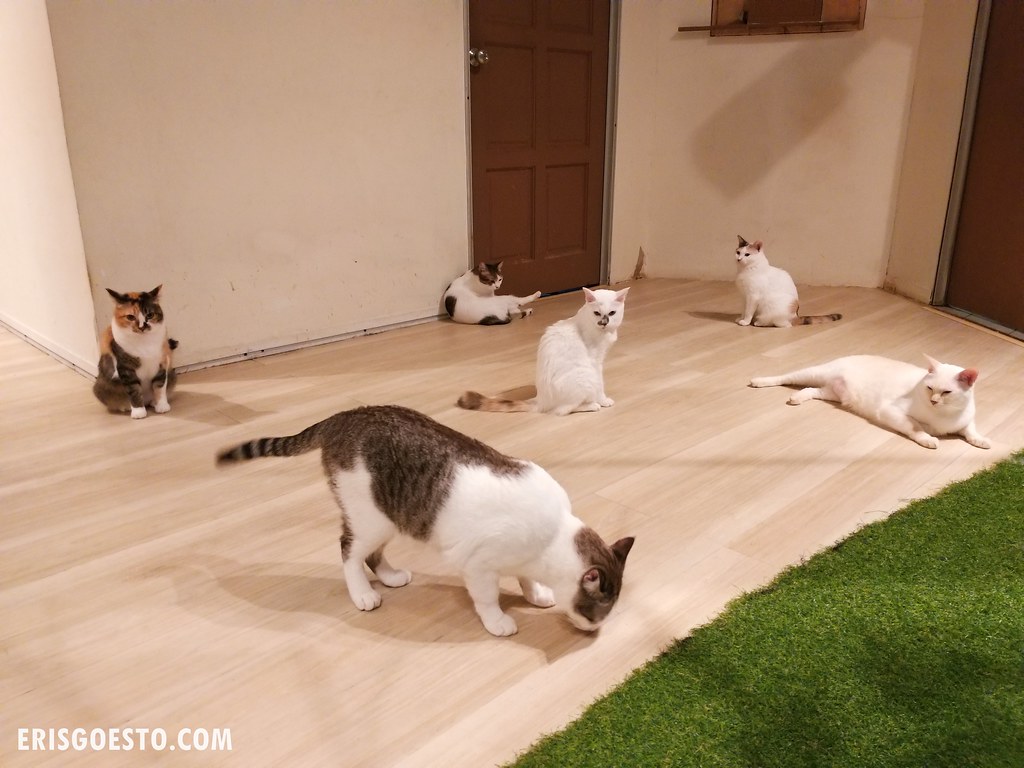 Waiting for food. The cats are fed a diet of raw chicken and you can tell they’re well fed and healthy from the plumpness of their bodies and the shine of their coats. 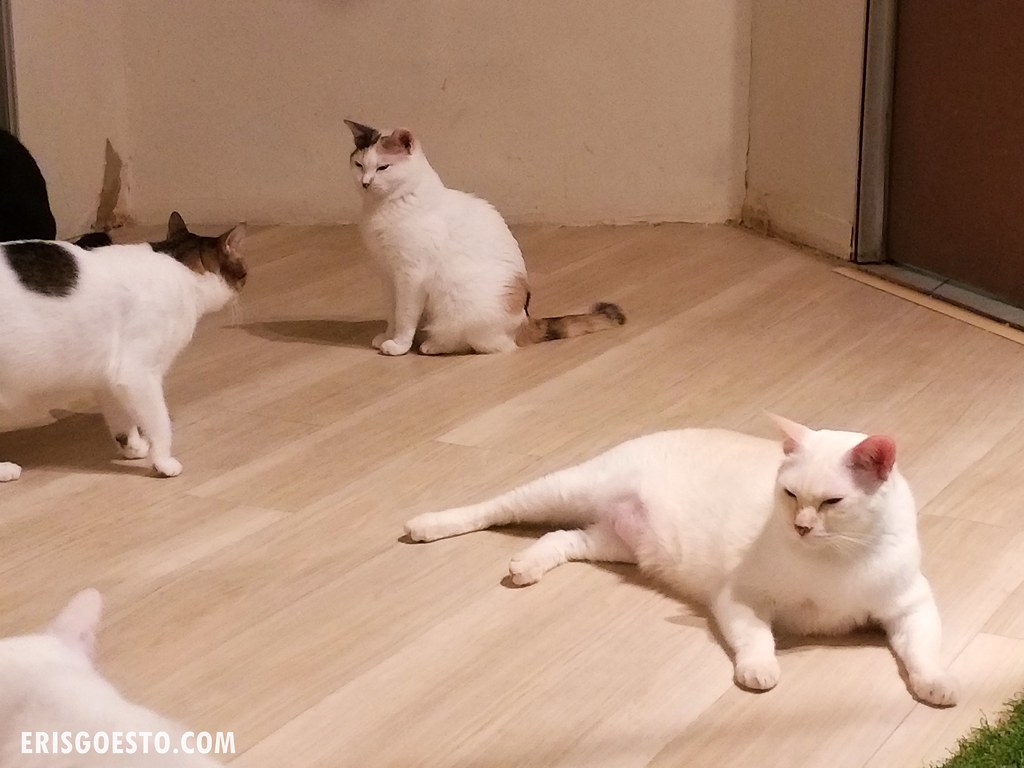 The chonky one is Olaf; at 7, he’s the oldest cat in the cafe. Don’t you just want to smoosh you face into that glorious belly 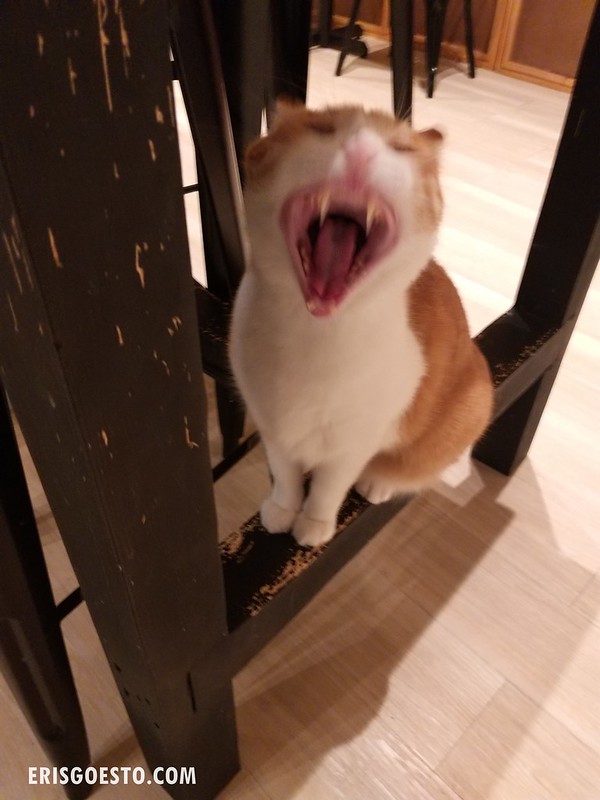 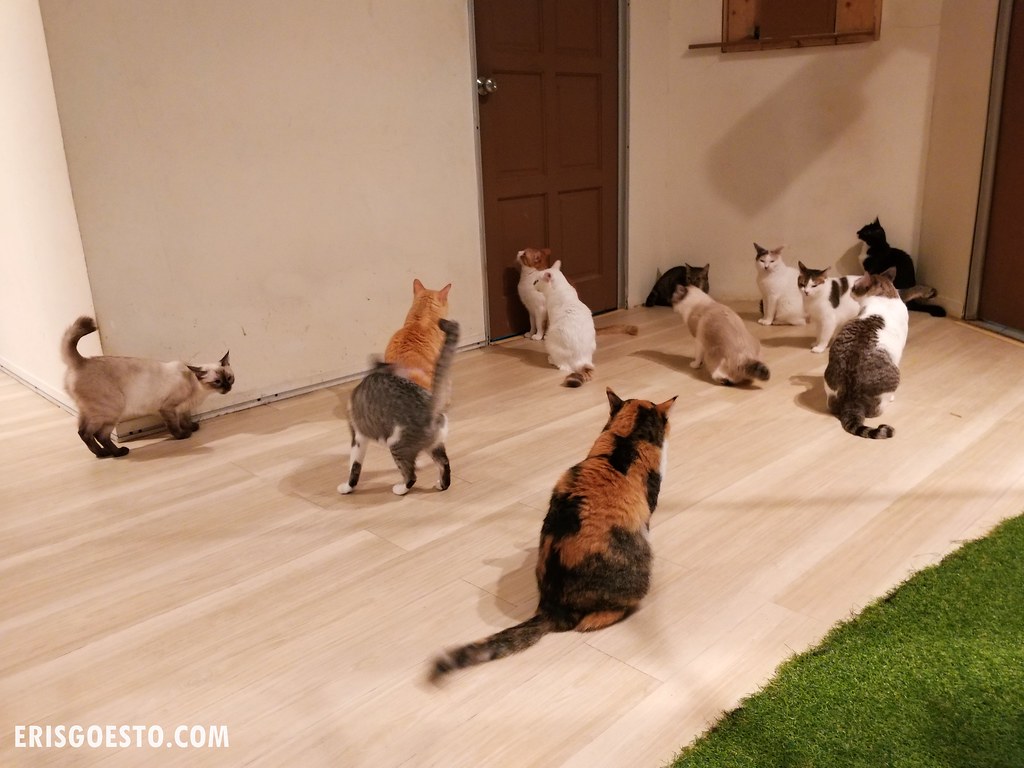 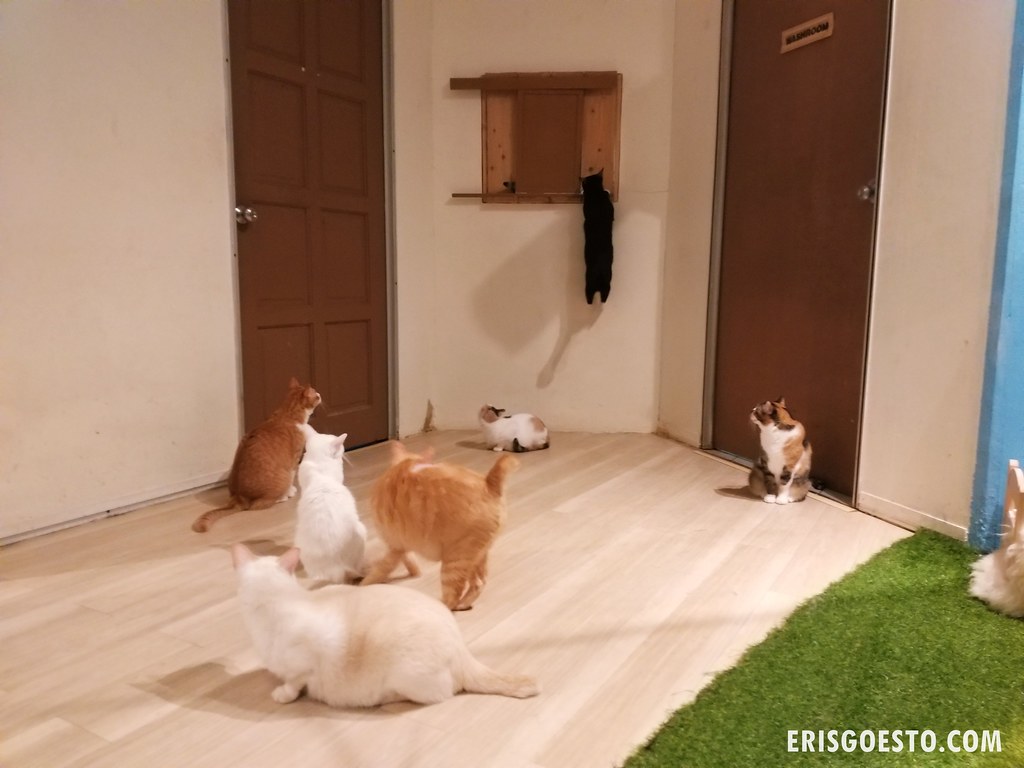 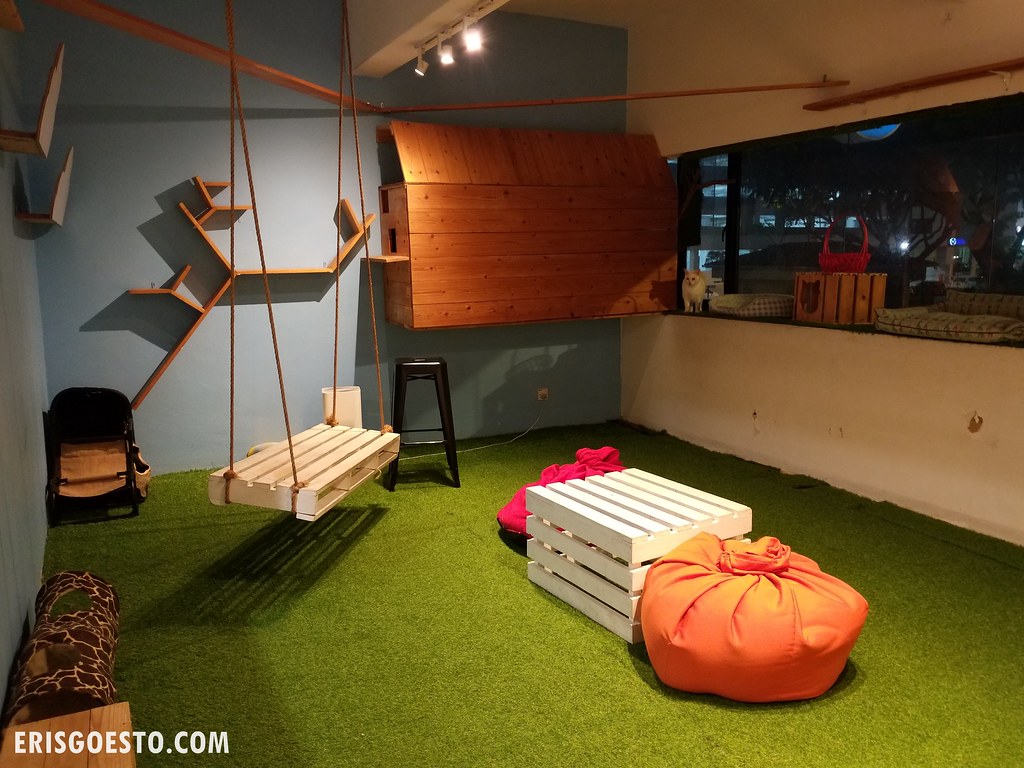 The front section of the cafe, with a cosy swing and more pouffes. Catwalks are installed overhead so the cats can enjoy looking down on the humans 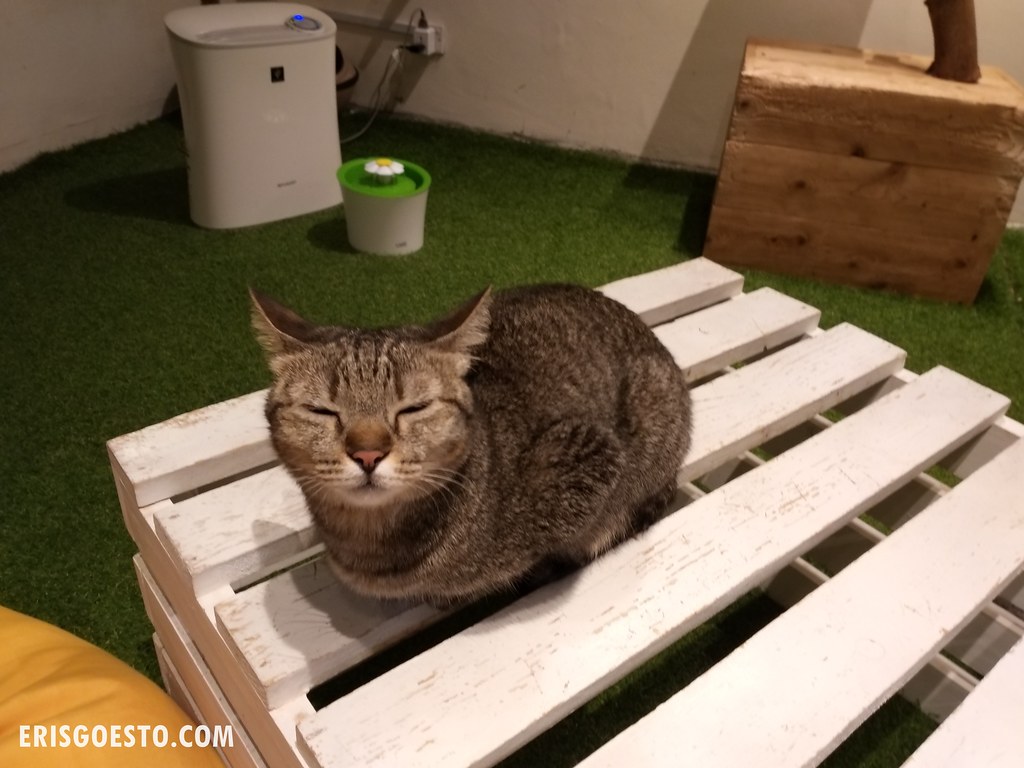 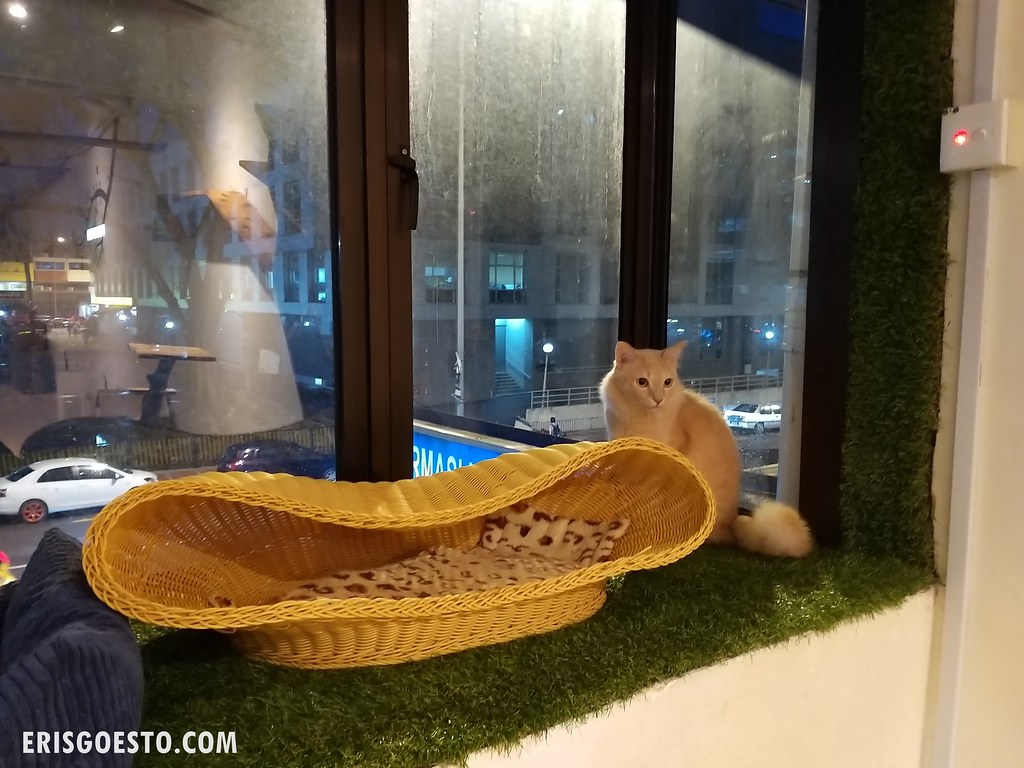 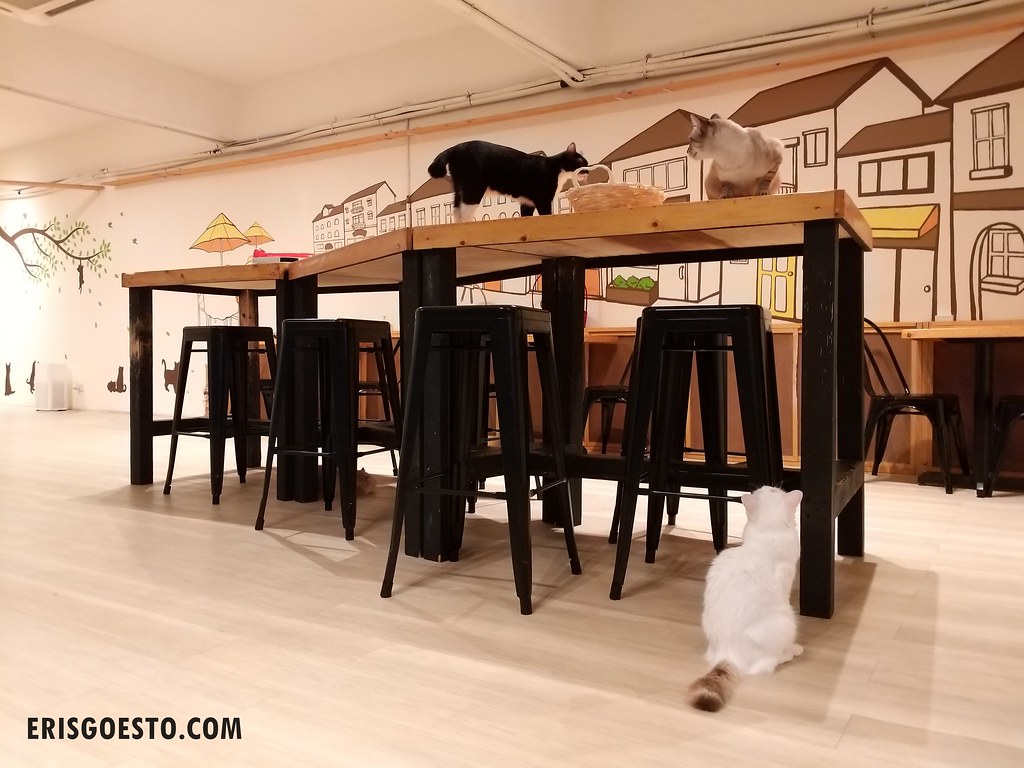 The kitties seemed more relaxed after they were fed – some even obliged when I flicked the feather toy at them (although they still didn’t want to be touched). 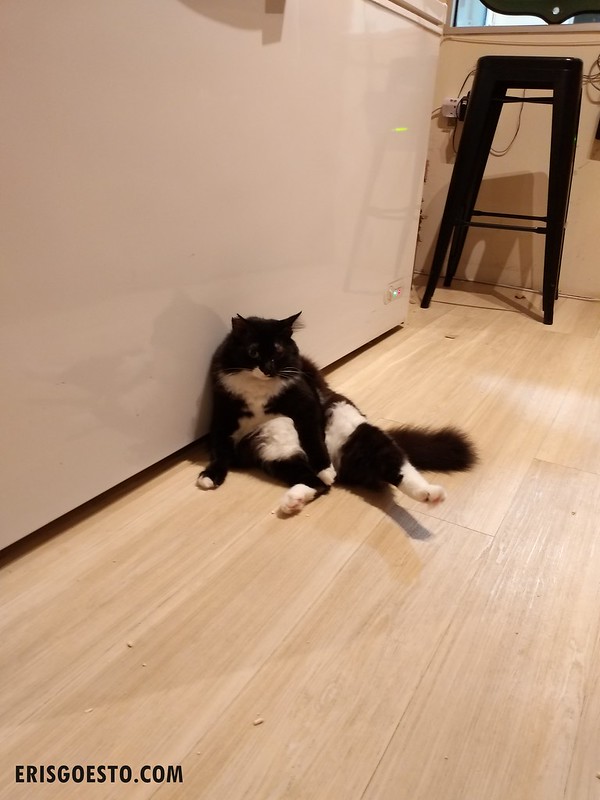 Mostly they just sat around lazing, like this handsome tuxedo cat Patches. Funny how graceful yet potato-like they can be; its effing adorable 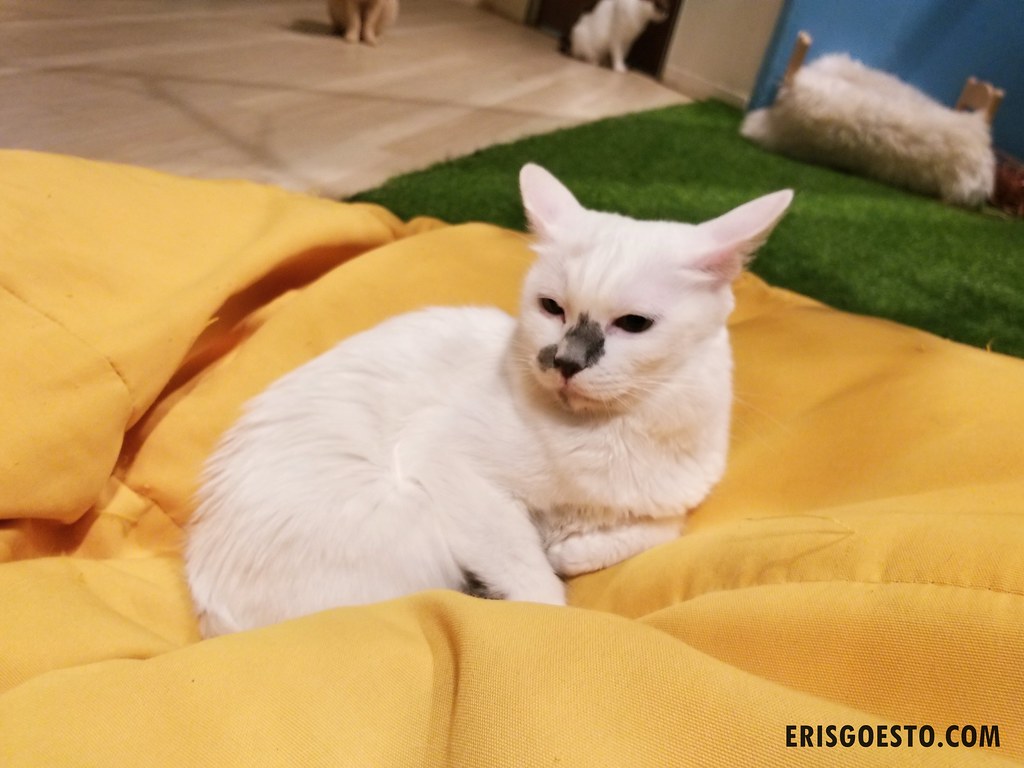 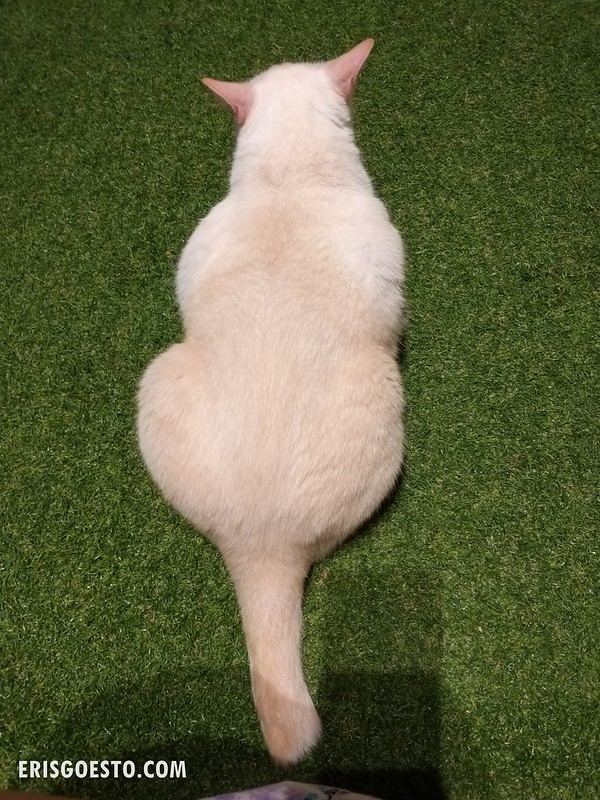 Olaff From Above: A Study In The Perfect Feline Form 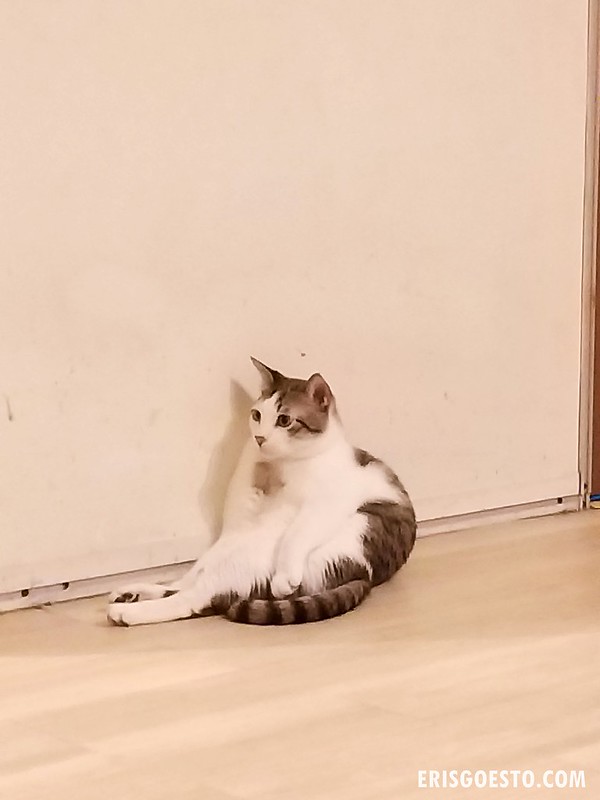 This kitty embodies my inner feelings.

Even though I didn’t get to touch the cats much, to quote Marie Kondo, looking at them just ‘sparked joy’ – and I left feeling relaxed and happier. A return visit is warranted.