If you’re ever looking to hang like the locals while travelling in Singapore and Malaysia, no trip is complete without a visit to a kopitiam. A Kopitiam is a no-frills coffee shop where things like coffee, toast bread, nasi lemak and noodles are on the menu. Expect to sweat it out in a noisy environment, as most of the older ones do not have air conditioning and often squeeze dozens of tables into one small space.

While in Kluang, we managed to grab breakfast at one of the most famous kopitiams in Malaysia – Kluang rail Coffee. Like the Ipoh OldTown White Coffee franchise, Kluang Rail Coffee has become so popular among Malaysians that it has franchises all over the country. The shop acts as the canteen of the town’s old train station and was opened in 1938.

A big thanks to my friend Evelyn who kindly brought us around her hometown for a bit of sightseeing and makan.

The Kluang train station is a simple single-storey structure of wood and reinforced concrete. The national train, KTM, still runs through here. 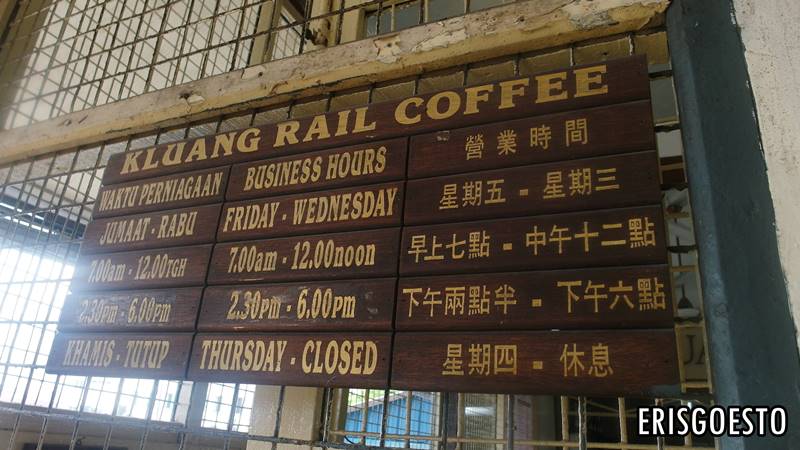 It was a weekday morning, but the place was still packed with patrons. We had to wait about 15 minutes for a table. The shop consists of an covered outdoor patio and an indoor dining area, separated by a kitchen where waiters bustle in and out.

We ordered two types of toast – the normal white bread and the bun. Both were slathered with generous amounts of butter and kaya (a sweet jam made from coconuts/pandan and eggs). The toast’s texture was superb – crispy on the outside and fluffy on the inside. They still make them using traditional charcoal grills, which gives them an authentic, smokey taste compared to the oven-toasted ones.

They are also famous for their nasi lemak (rice cooked in coconut milk and served with sambal, a spicy chilli/onion/anchovies sauce), which sold like hotcakes whenever a fresh batch was put out on the table. These cost RM1 (about 0.30USD) but were rather plain (usually nasi lemak comes with boiled eggs, cucumbers, fried anchovies and chicken curry or rendang).

The bun toast, with a crackly brown surface and soft white bread on the inside.

Pops and I ordered the half-boiled eggs.

Perfectly cooked – not too well done or raw. One can opt between normal farm variety eggs or kampung eggs, which are eggs from free range village chickens. We seasoned them with a dash of pepper and soy sauce. You can also dip the toast in this heavenly mix.

After the meal, I went shooting random photos of people travelling on the train which had just pulled in. Family members waved from the window, standing next to it until the train pulled away to catch last glimpses of their beloved relatives. 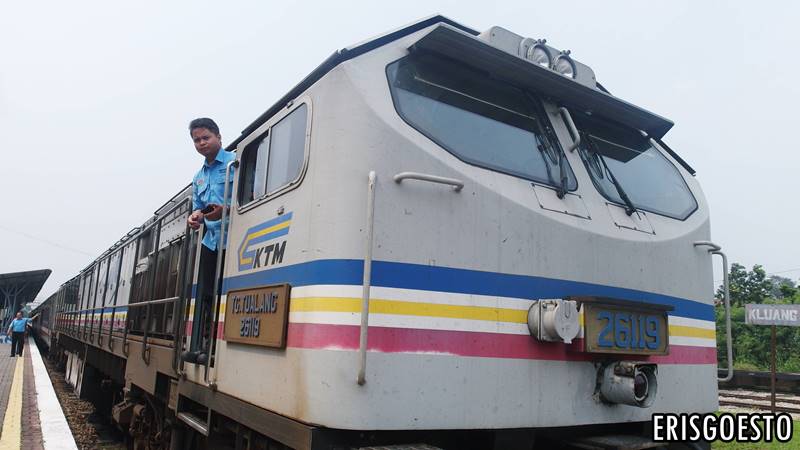 KTM, the ‘Blue Tiger’. FYI, the Malayan tiger is sort of our national animal. We have it on our national emblems. It’s sad that they are slowly being hunted to extinction, or being forced out of their homes due to deforestation.

If you’re ever in this quaint little Johor town, pay a visit to the Kluang railway station for the simple yet amazing food and maybe sit by the platform to watch the trains come in.

Location: At the end of Jalan Station, Kluang

Evelyn next brought us to the nearby Gunung Lambak Forest Reserve, a hilly area with tracks where locals often go jogging. The place was quiet on a weekday. There were a couple of families swimming in the public pool in front of the reserve.

Nice and cooling environment, but the few facilities available here are quite unkempt. Evelyn said the local town council could not afford to maintain the upkeep of the park, hence everything is quite dilapidated. The pond is a sad sight, with only two forlorn turtles munching on fallen leaves on the water’s surface.

Kluang has been a fun and relaxing retreat for a day or two, but I don’t know if there’s much ‘return’ value because there is really not that much to do here. Still, a nice place to go for the first time visitor.

One thought on “The Original Kluang Rail Coffee, Johor”