On our second day in Penang, we decided to go sightseeing in Georgetown, a busy part of the island and where many tourist attractions are located. My advice to travelers is to bring along sunscreen, a shady cap/hat and loose, cool clothing. Also lots and lots of water to avoid getting dehydrated.

Here are some of the places we went to: 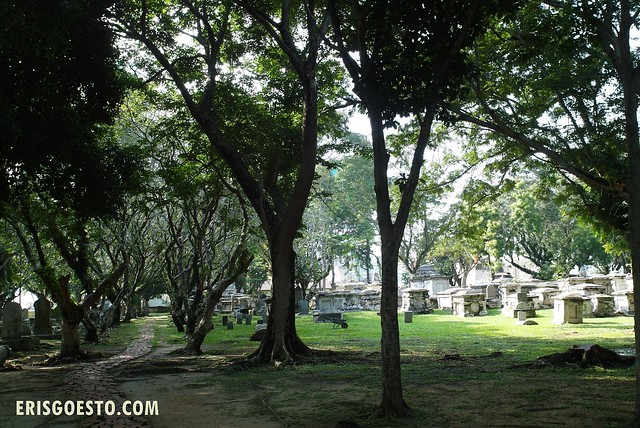 A cemetery might seem like an unlikely place to visit, but the Old Protestant Cemetery along Northam Road (Jalan Sultan Ahmad Shah) is worth a peek into. Established in 1789, it was a disused and neglected cemetery for over a century before restoration works began in 2012. There is pathway made with tiles, lined with old frangipani trees. The dark twisting branches reminded me of fairytales, dark woods and horror films. It was tranquil in the day, but it must be scary at night.

The founder of Penang, Sir Francis Light, was buried here, along with many early European merchants in Malaya. As it is further out from the other attractions, not many tourists seemed to flock here. 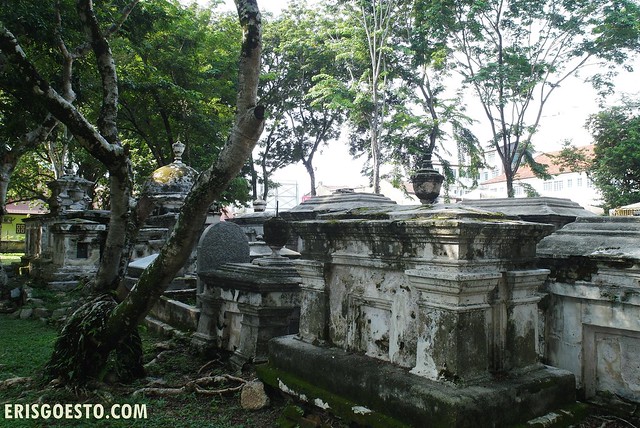 Although there are more than 500 graves here, most are not tended to and look dilapidated. Which is sad, seeing how it has such a long and rich history. Some of the tombs are elaborately decorated, while inscriptions can still be seen even after two centuries. 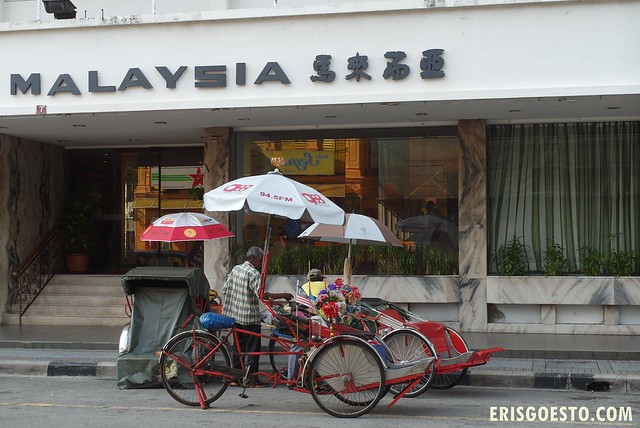 After much walking, we finally got to the city centre! Way back, there were lots of trishaws in Penang but they mostly went out of service. Now, the business has been revived, thanks to a tourist boom to the island. 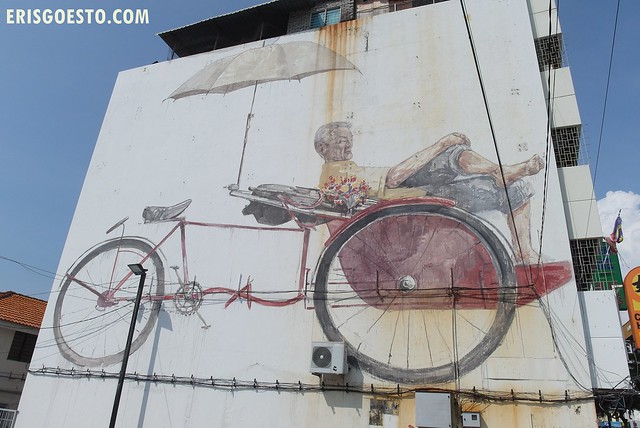 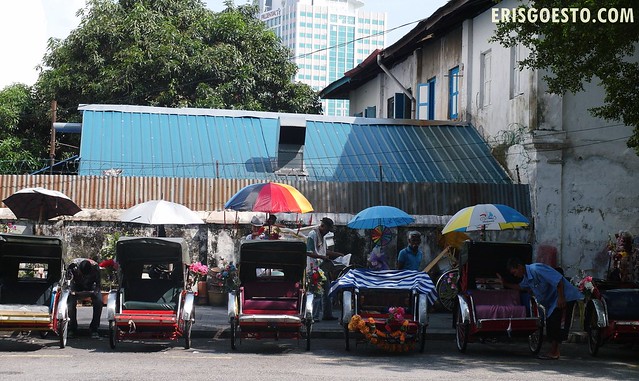 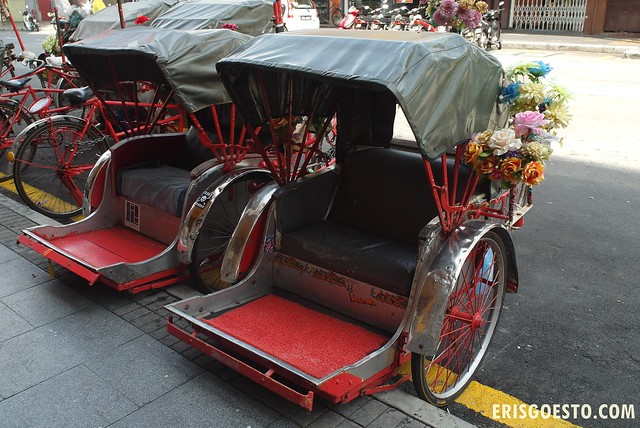 We were considering if we should get bicycles to get around, but decided against it because we weren’t sure of the places and had to keep refering to the map. Can’t be getting up and down the bikes so frequently. 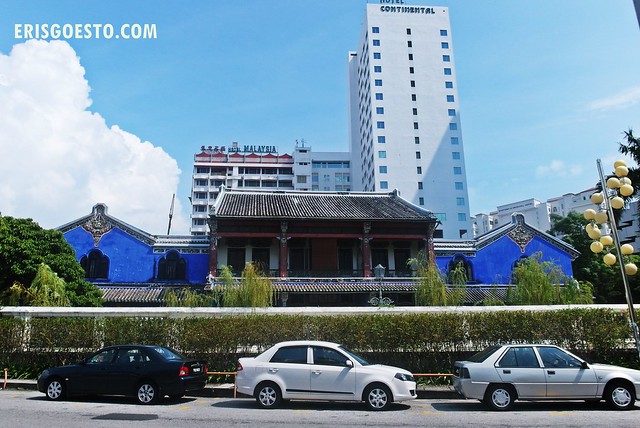 The Cheong Fatt Tze Mansion is a large blue building along Leith Street. It is further away from the cloister of attractions in the centre of town. Built in the 19th century by a wealthy Chinese merchant, which the mansion is named after, it has an impressive 38 rooms, 5 granite-paved courtyards, and 7 staircases. The deep blue colour of the walls was a popular colour during that time among people living in British colonies. In 2000, it received a UNESCO Heritage award. It currently operates as a Bed and Breakfast, but is open to the public for viewing three times a day. 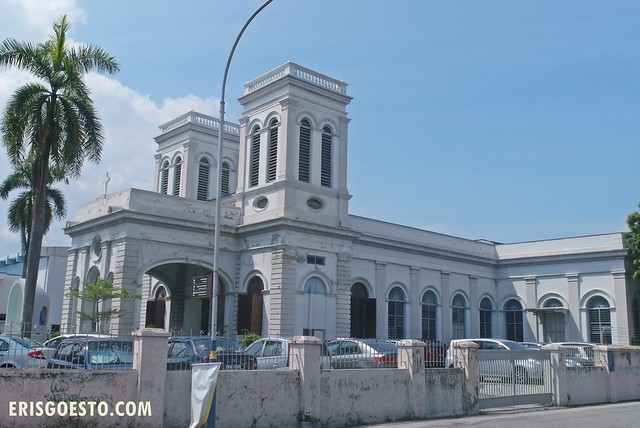 Next on the list was Love Lane, where the old Church of the Assumption is. 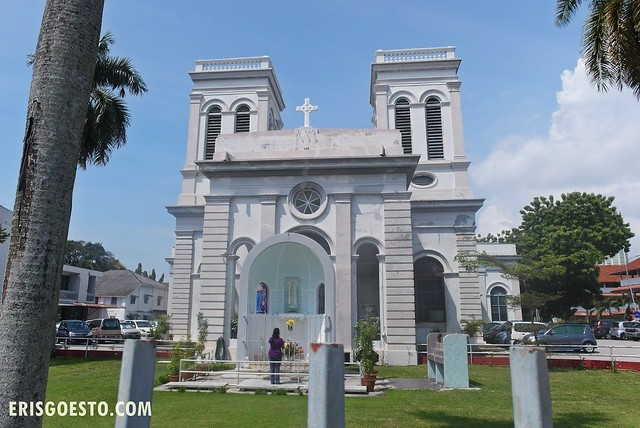 Founded in 1786, this Roman Catholic church was one of the first built after the British landed in Malaya. It was named the Church of Assumption as it coincided with Sir Francis Light’s arrival on the island during the feast of the Assumption of The Blessed Mary. 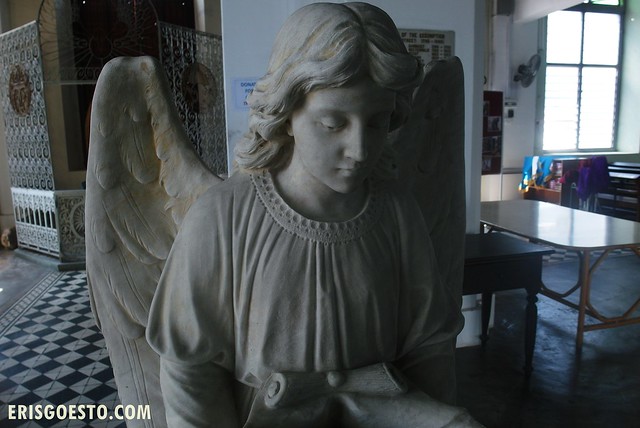 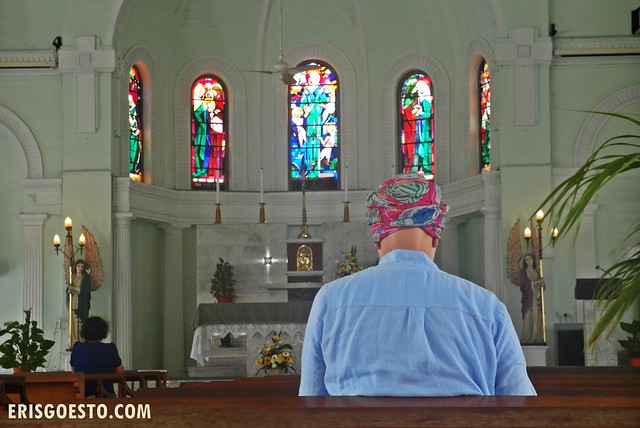 The church’s interior was not very large, but it was  clean and well-kept. The straight-lines on it’s exterior facade lends it a modern feel; you wouldn’t think it was a >200-year old church. Paintings that line the sides of the church tell a story. There was a confession booth where priests sat on one side and devotees on the other. 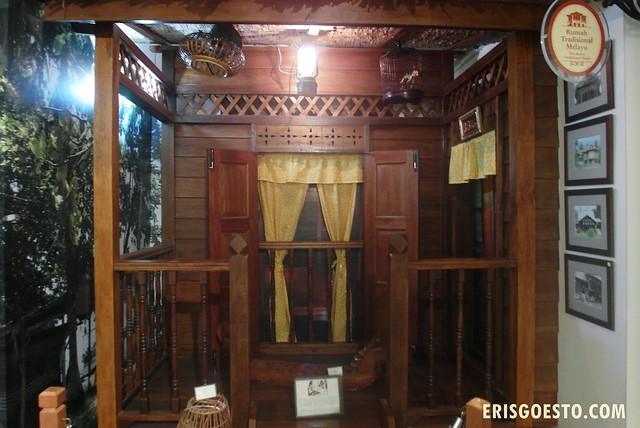 Just next to the Church is the Penang State Museum. For just a low, low entry fee of RM1, visitors are taken on a journey of the culture and heritage of Penang. There are different sections dedicated to the three main races of Malaysia: Malay, Chinese and Indian; and how their culture in Pennag has evolved over the years.

There are many interesting things on display. We saw a pair of three-inch lotus flower feet shoes. Back in the days, Chinese ladies (especially those from privileged or wealthy families) had their feet bound tightly from birth, resulting in tiny, severely deformed feet. D: It sounds horrible now, but it was the trend back then. The smaller they are, the better. The goal was to get your feet into three inch shoes (look at your feet now and imagine. Now shudder.)

The ladies had it so bad they couldn’t walk, but that was the whole point because women from wealthy families didn’t have to work and would have servants to care for them. 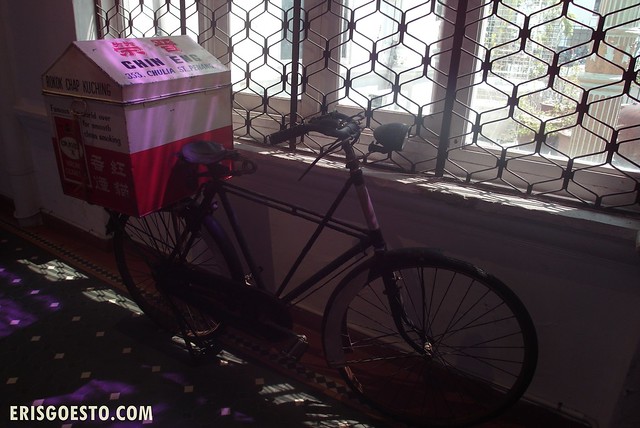 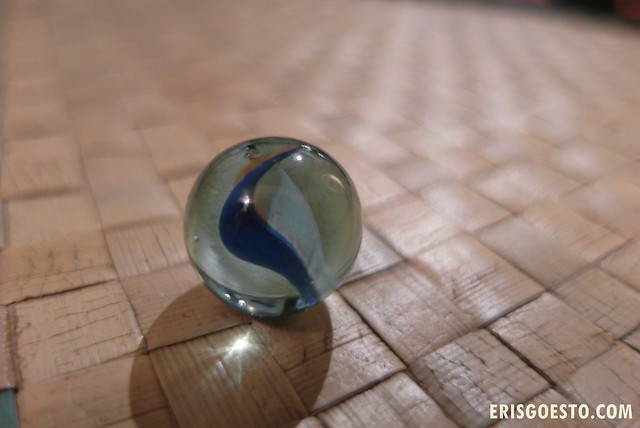 There was a corner where visitors could play congkak !

The game involves getting the most marbles into your ‘house’ (the two larger holes) at each side. One player takes one house. Next, you have to take the marbles from any of the smaller holes on your side and move accordingly. When you pass by your ‘house’, you put one in.You cannot skip the smaller holes, but you can avoid the opponent’s house. It’s a fun game involving math and strategy, and a thing to keep young kids occupied back when computers weren’t available. 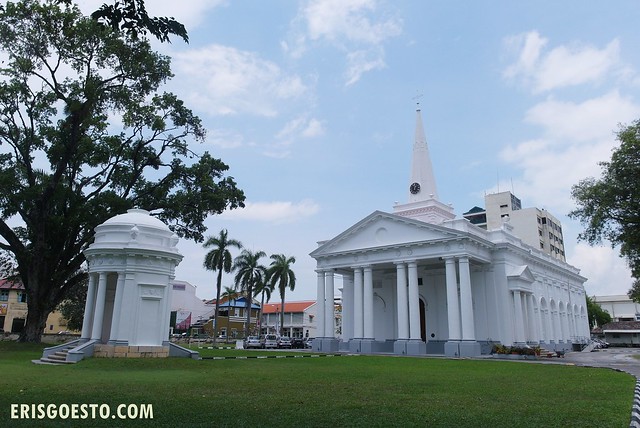 Another similar looking white facade building next to the museum is St George’s church on Lebuh Farquhar. The oldest Anglican church in South East Asia, it was completed in 1818. There is a small gazebo directly in front of the church. 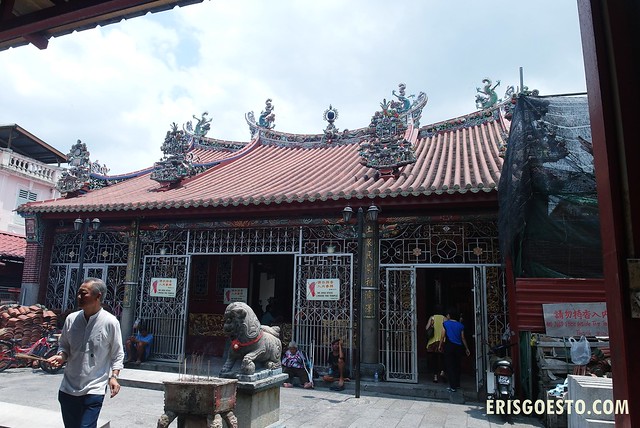 Goddess of Mercy, or the Kuan Yin Teng Temple between China Street and Jalan Kapitan Keling, One of the oldest temples in Penang, it is packed during festivals. Many devotees were lighting incense sticks and prayer lights during our visit. 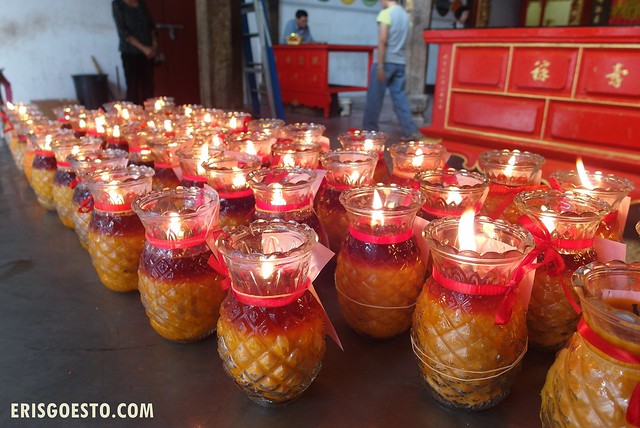 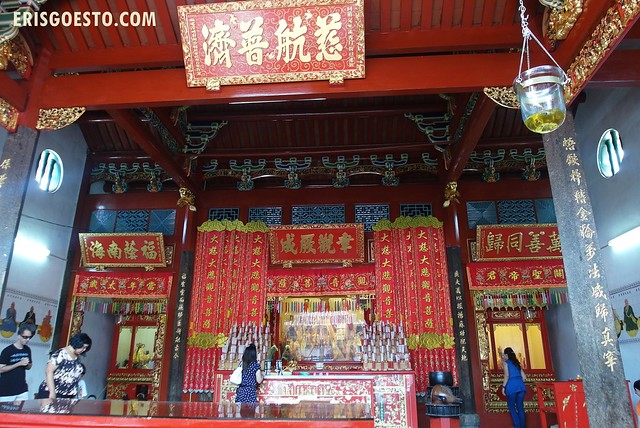 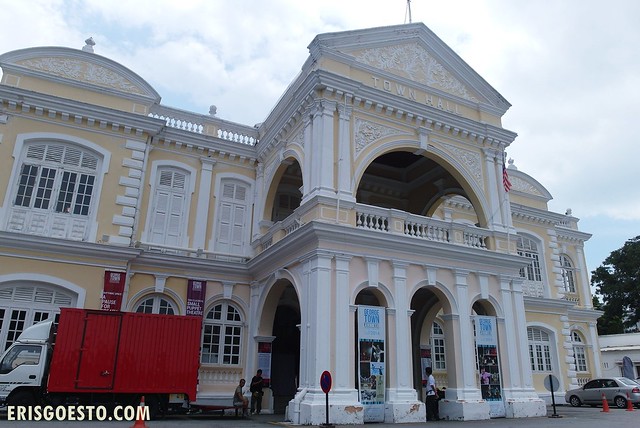 Further down the road next to the sea is the Penang Town Hall. Officiated in 1880, it was once the epicentre of Penang’s elite and members of high society. Designed in the Victorian style, it currently has a grand ballroom for functions, and art/drama plays are regularly held there. 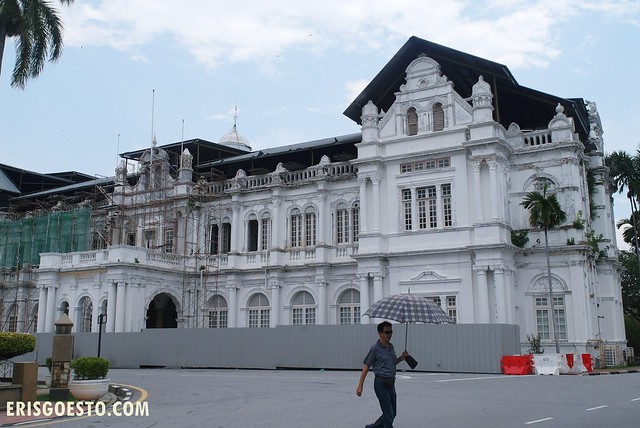 Last but not least, the City Hall, which was, unfortunately, under construction at the time of visit. Built in 1903, it was erected for more space next to the Town Hall. Today, both buildings are located just opposite the field on Esplanade Road overlooking the sea. Pretty nice views!

That’s it for this part of Georgetown. Keep reading for more updates!

One thought on “Travelogue Penang: Things To See In Georgetown”