Finally done with the 30 Day blog challenge! Now I continue posting about my adventures and other random shiz. 🙂

The second day at Genting. Previously we visited the dying theme park and the casinos for a round or two. Now it was time for our descent back to the hustle and bustle of the city. Damn you hot weather ;_;
Decided to stop by the Chin Swee Cave Temples before we departed back to KL.
Mum superstitiously said that gamblers are not supposed to go to the temple before going to the casino, coz they’d lose money lolol. 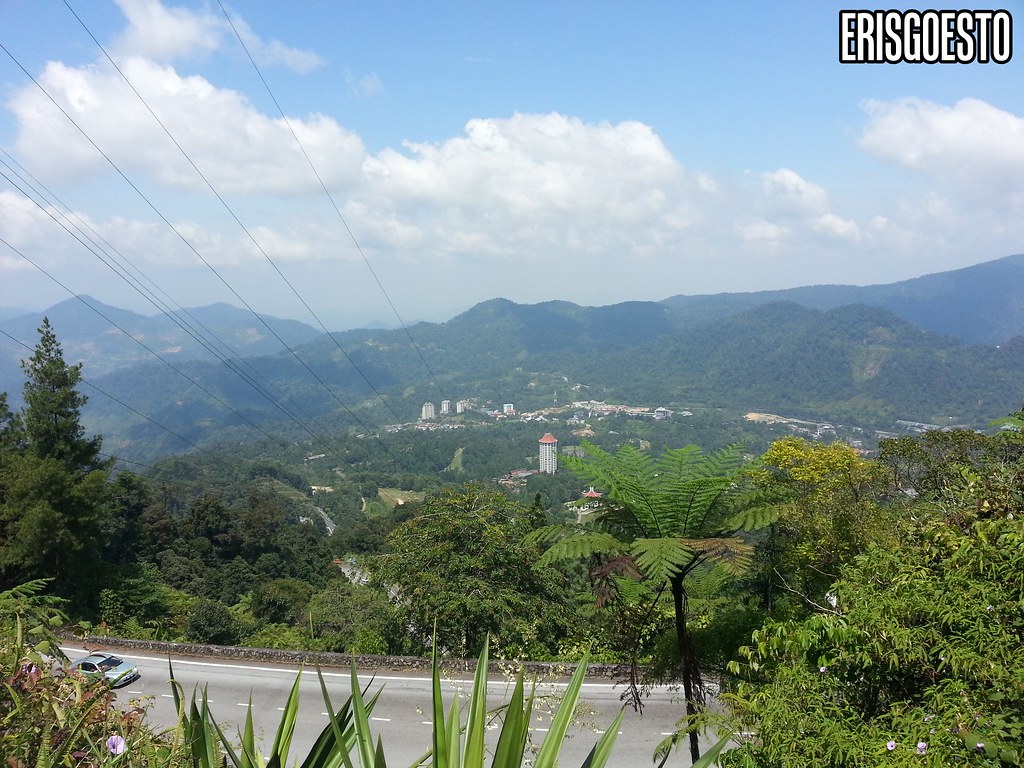 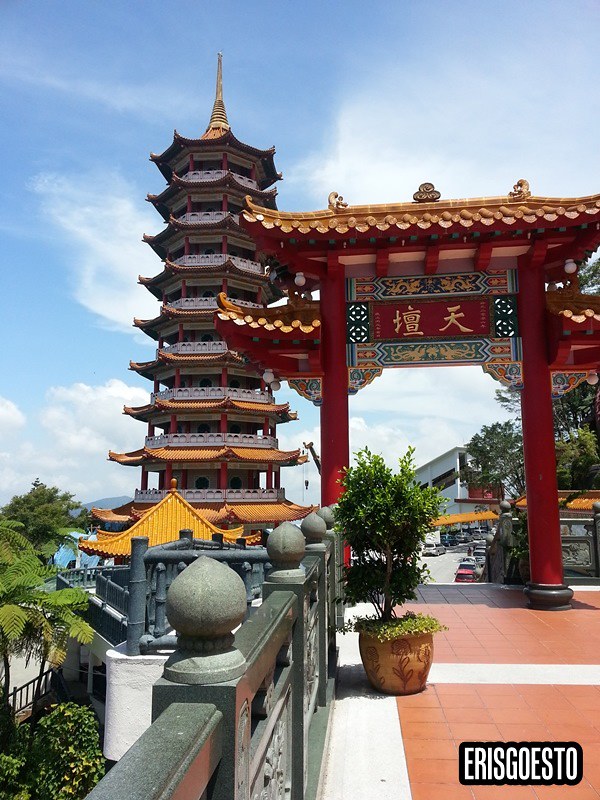 A 9-storey tall pagoda sits atop one side of the mountain, overlooking a lush green landscape below. It feels like a temple amongst the clouds. 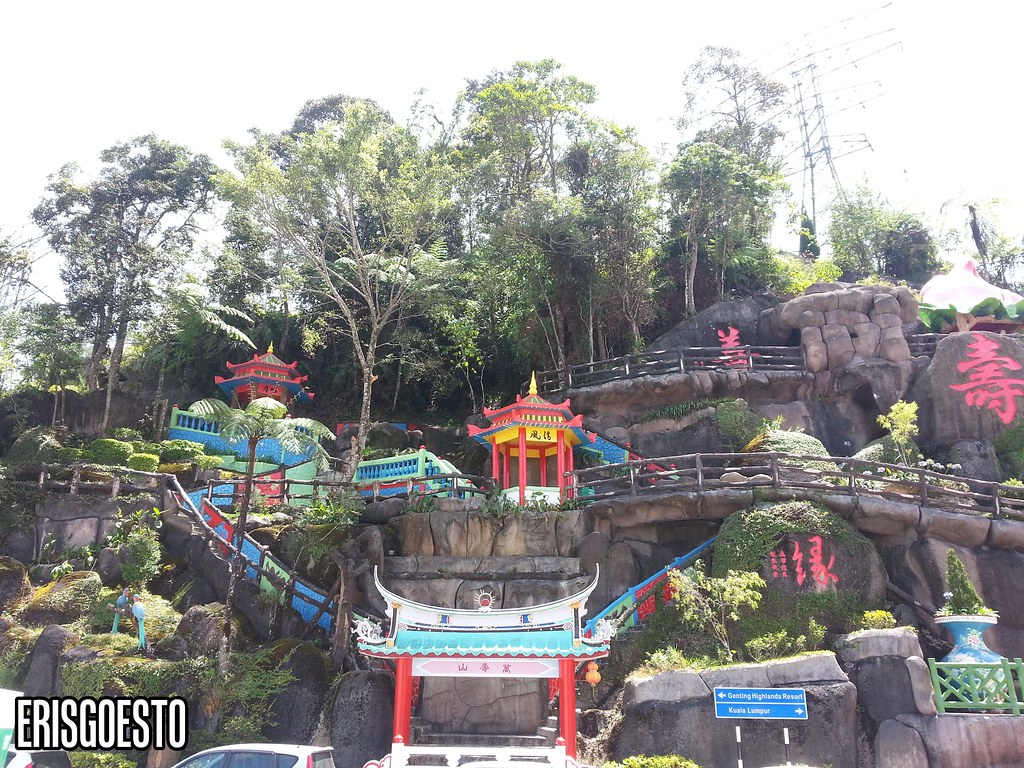 Just opposite the pagoda is a ‘walkway’ decorated with colourful gazebos and figurines telling stories of ancient deities and Bodhisatvas. The cooling weather makes for a good stroll. 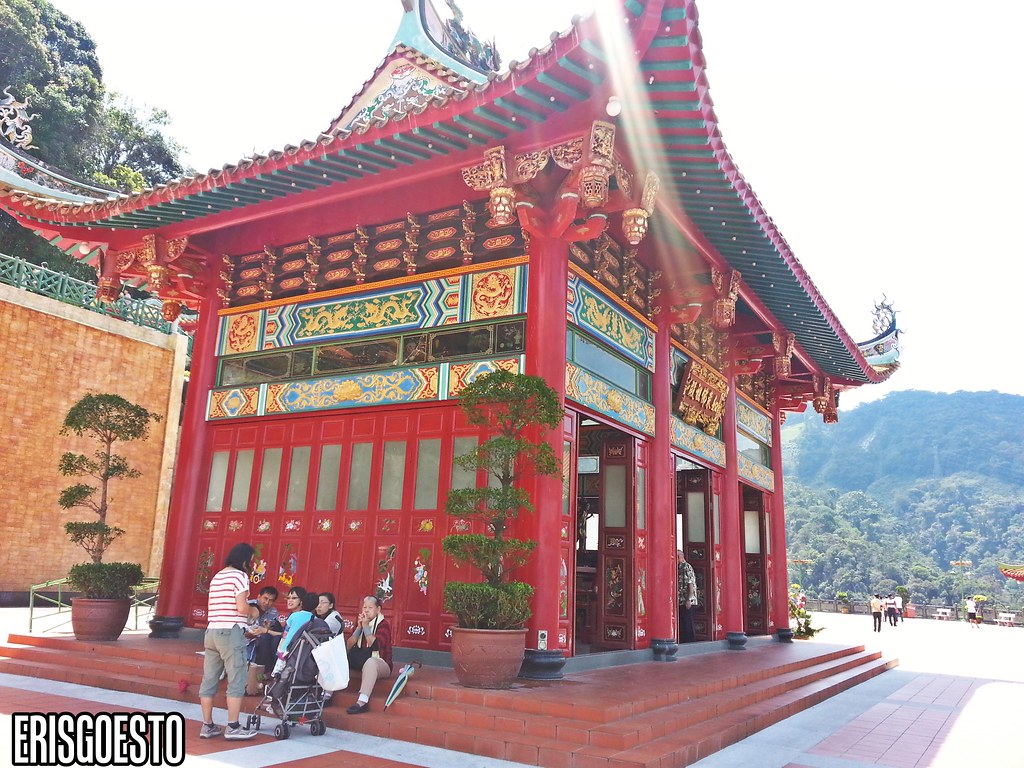 Built on a platform overlooking the hills is a big, majestic looking shrine. I liked how red and bright it was amidst the blue sky, with it’s pretty dragon and phoenix motifs pointing towards the heavens. 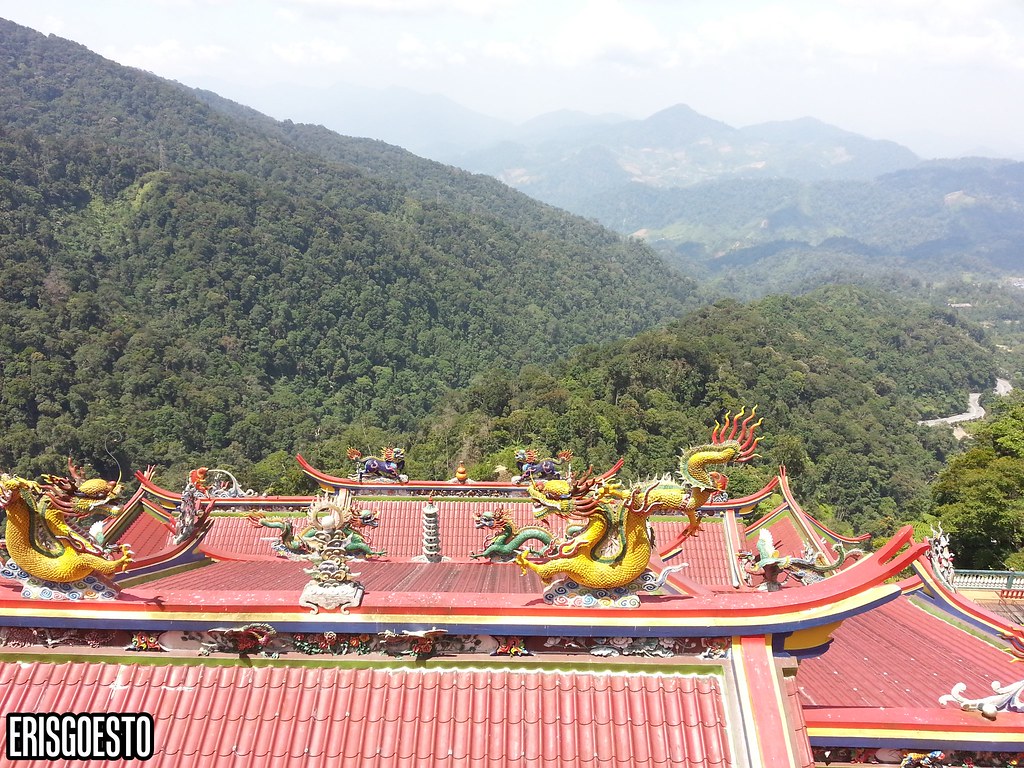 Gazing down the rooftops decorated with heavenly scenes into the green valley below. 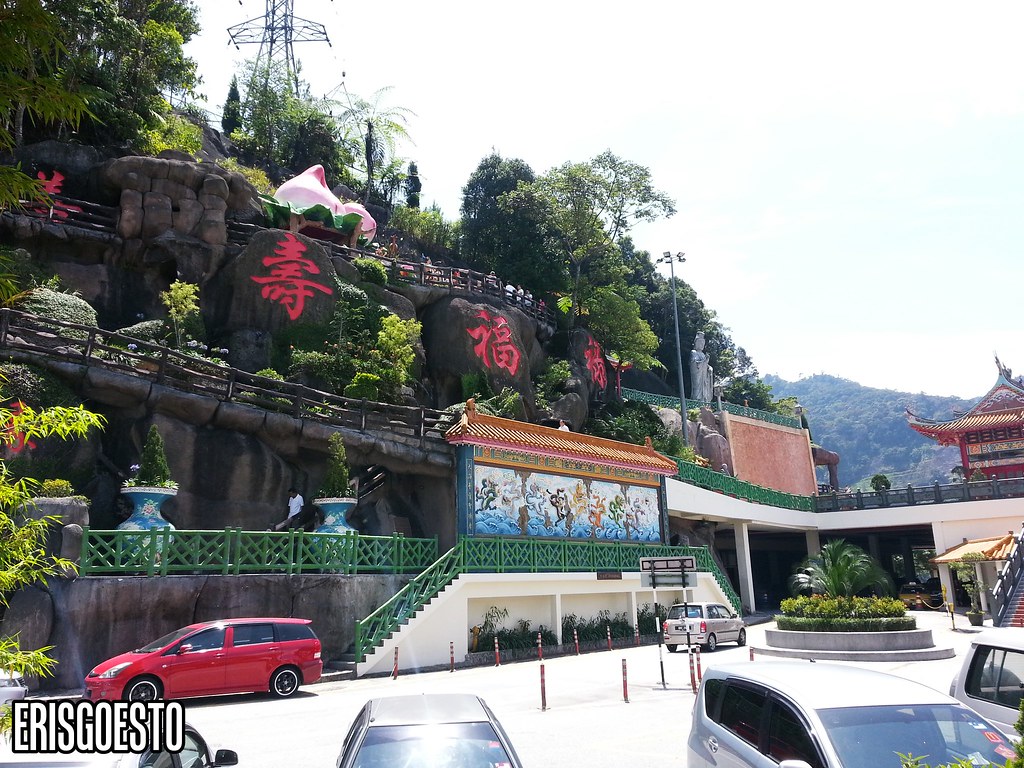 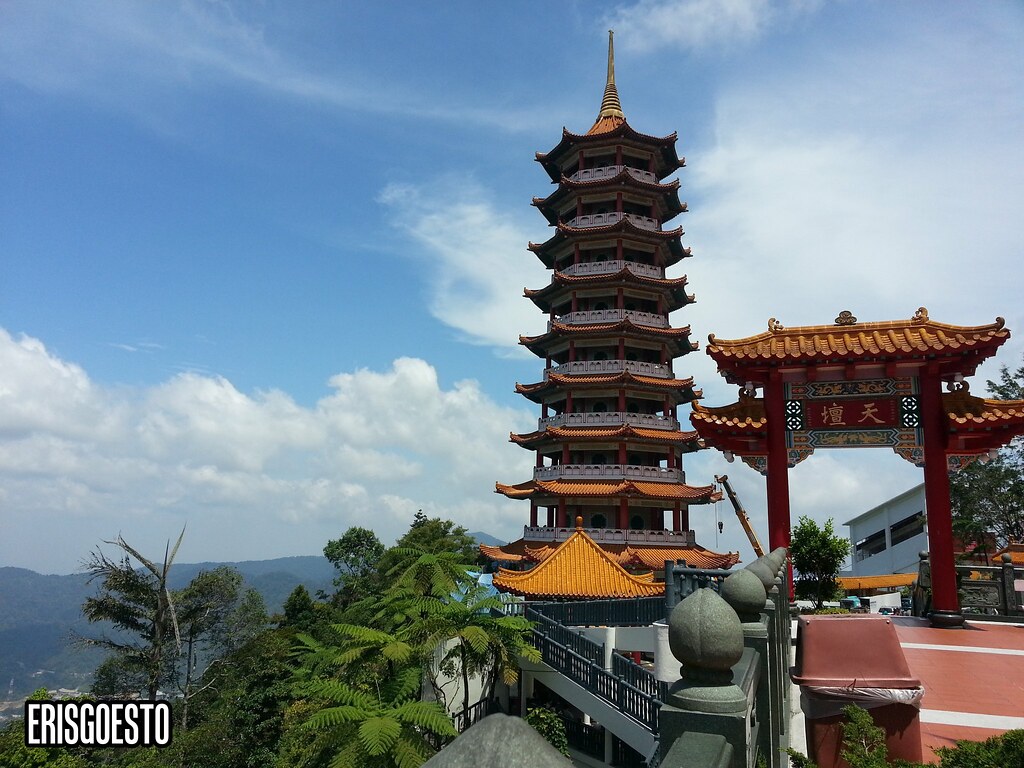 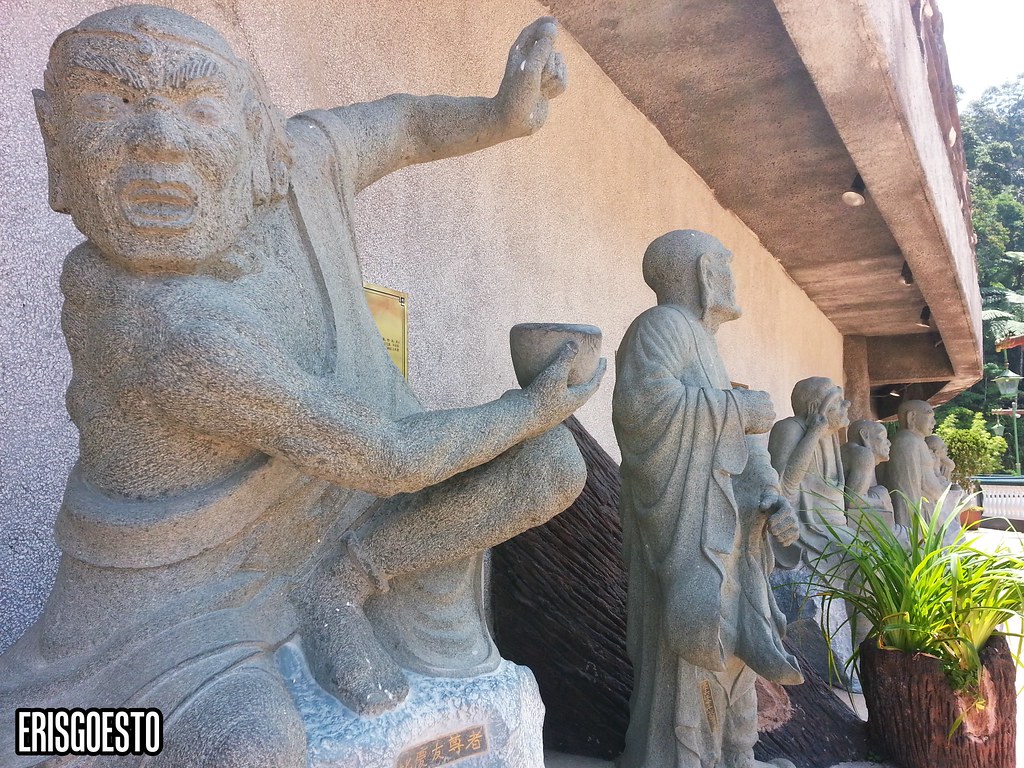 The pavilion is lined with statues of bodhisatvas, each representing their own stories. Eg, there was the elephant-riding Buddha, the laughing Buddha, the thinking Buddha, etc. and a brief description of each’s past life. 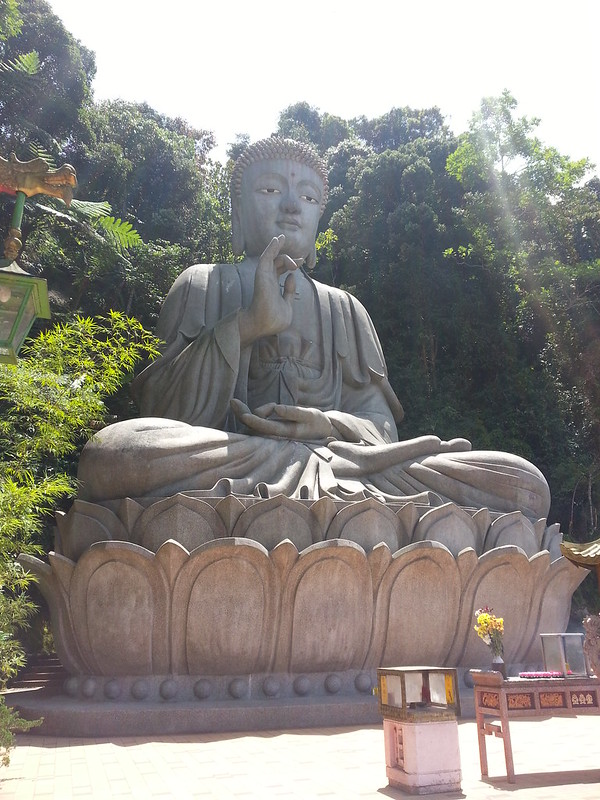 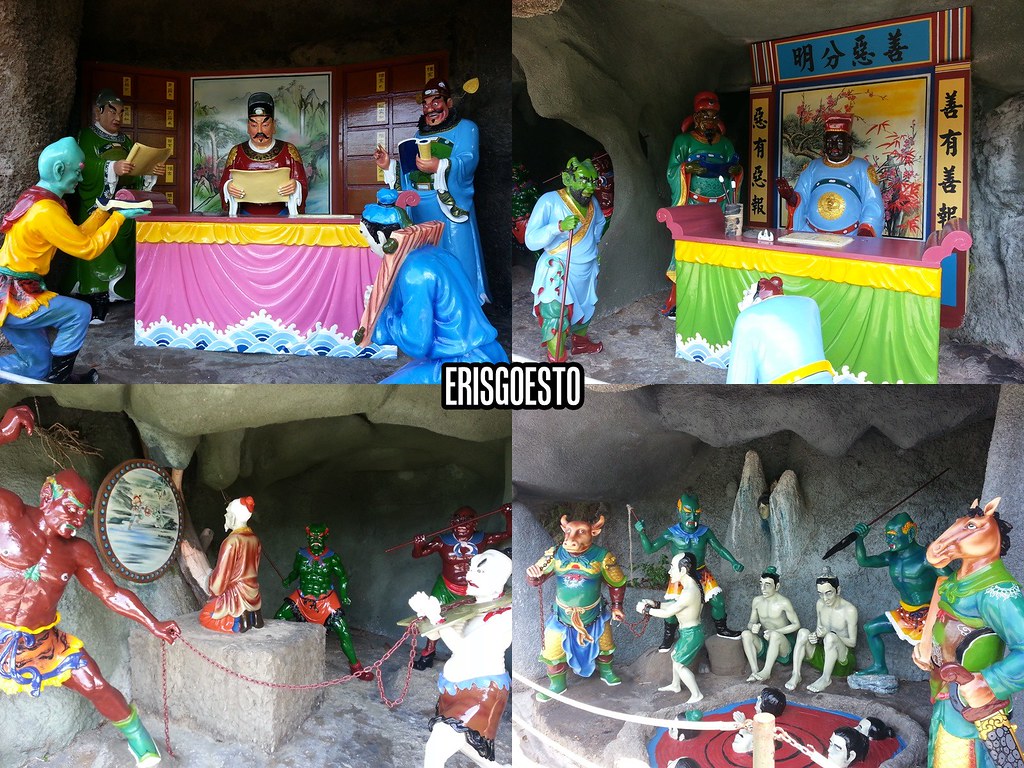 We took the ‘Nine Depths of Hell’ walk. For those who are easily offended by different cultures and beliefs, feel free to skip it. The ‘walk’ depicted scenes from Taoist hell, where humans go to pay for their sins in life before they are reborn into their next life. There are varying degrees of ‘seriousness’, depending on the type of sins one has committed. Obviously the most severe one was the deeper ones, the eighth chamber which is the ‘eternal hell’ or something like that where sinners have no hope of salvation (kinda like Christian and Muslim hell?) 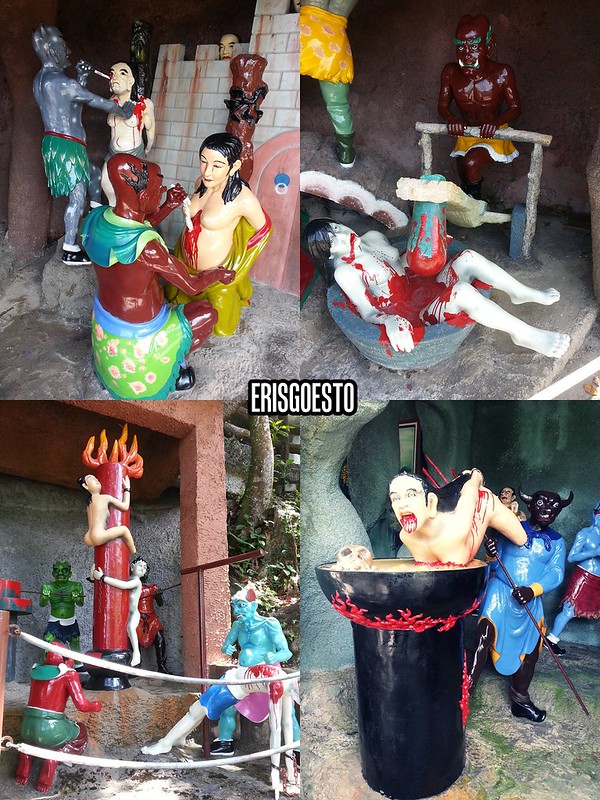 I find the person who came up with all these torture stories would put James Wan to shame. They would be equivalent to the ancient version of ‘Saw’. (Bottom right) Two very famous ‘hell guards’ in Chinese culture, the ‘ngao tau mar meen’ (literally, cow-head and horse-face) guard prisoners from escaping from their fiery punishments. 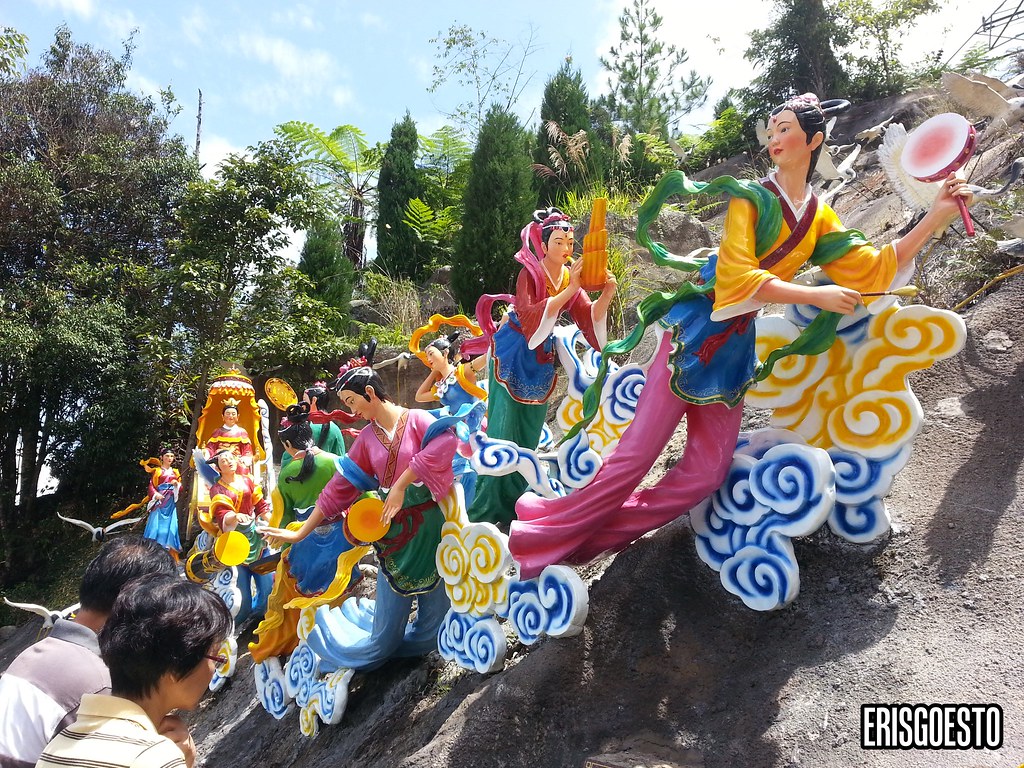 Eight fairies crossing the heavens. In the carriage is Wong Mo, or Great Mother of the Jade Emperor, who is the ruler of heaven according to Taoist beliefs. 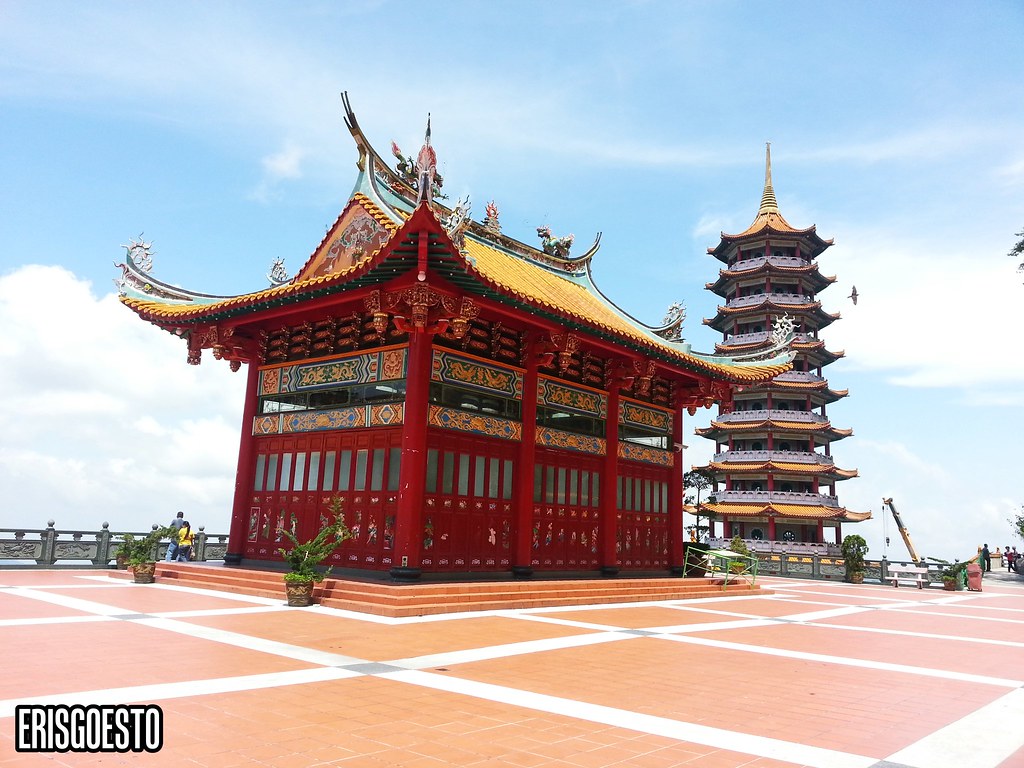 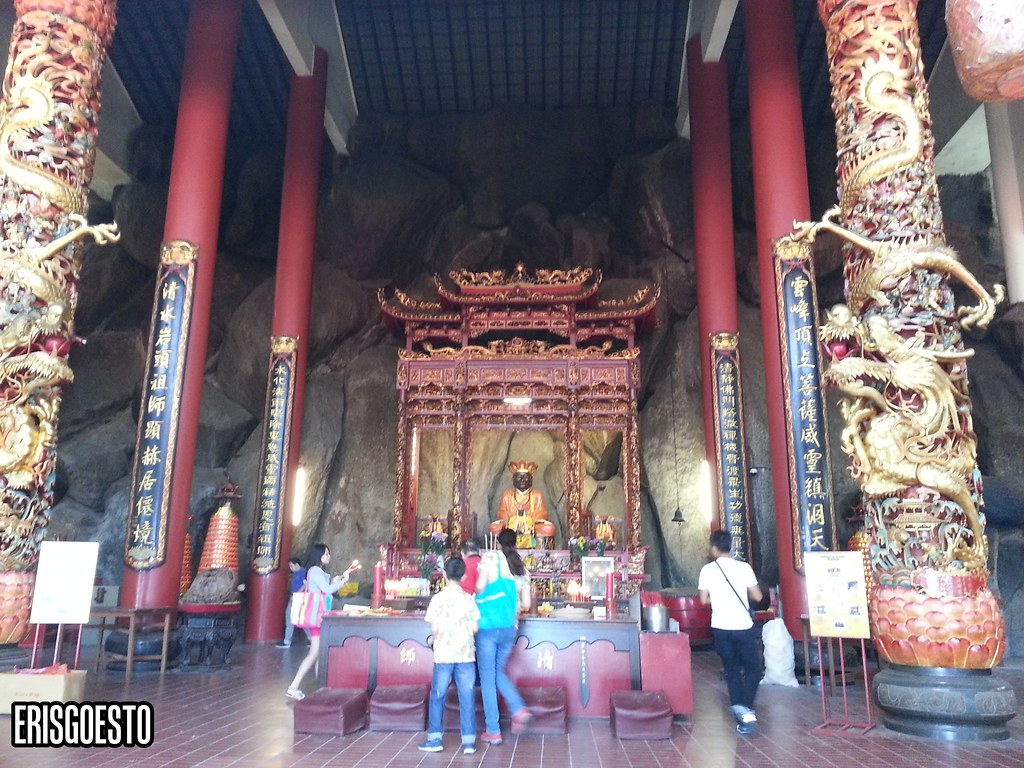 The actual temple houses the revered monk Chin Swee who has been deified. The temple is built around a cave so you can see the rock formations behind. The altar faces the vast valley beneath it. It’s really pretty to stand at the edge and look down at the green below and the blue above. 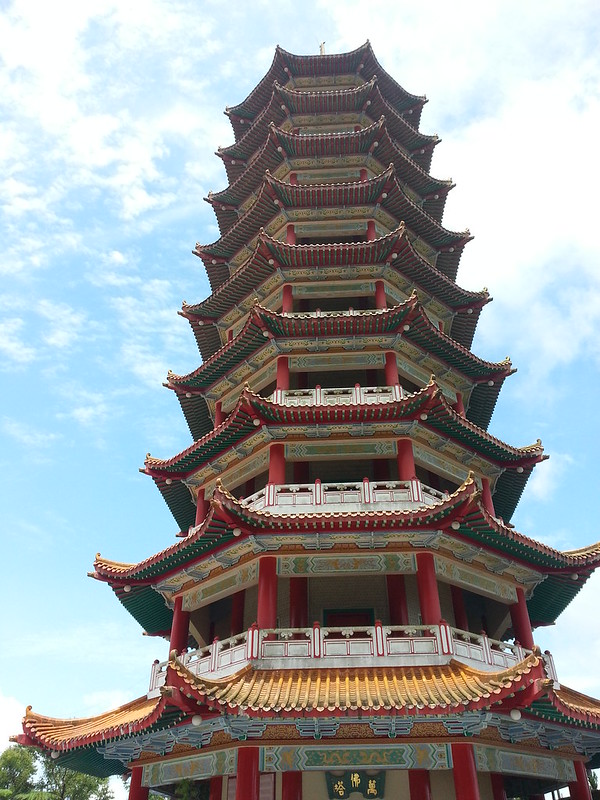 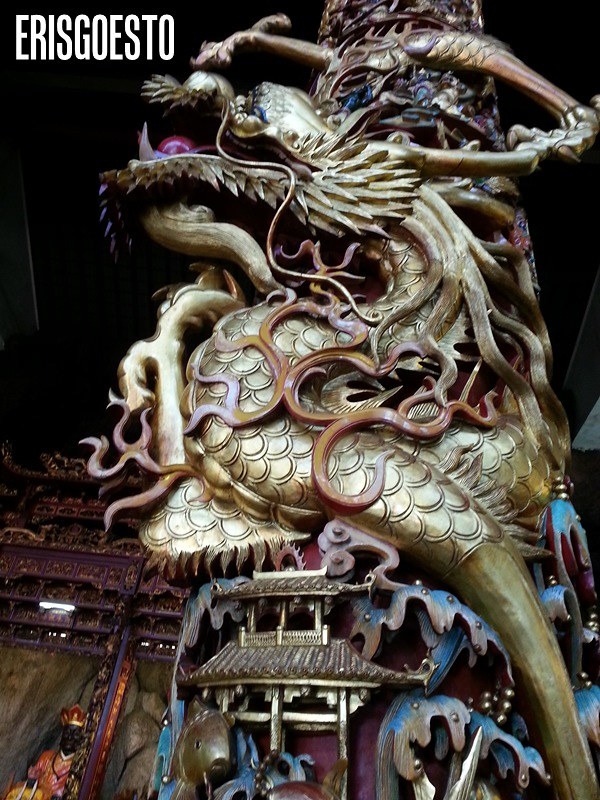 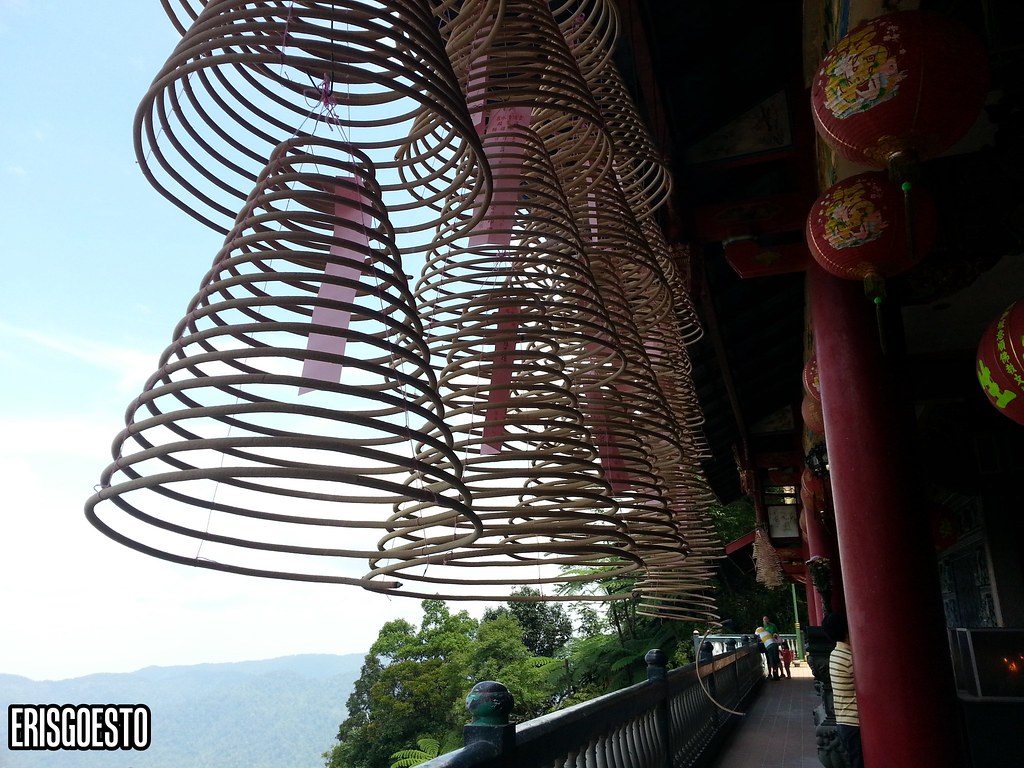 Coils of incense with wishes written on them for good luck, wealth and prosperity 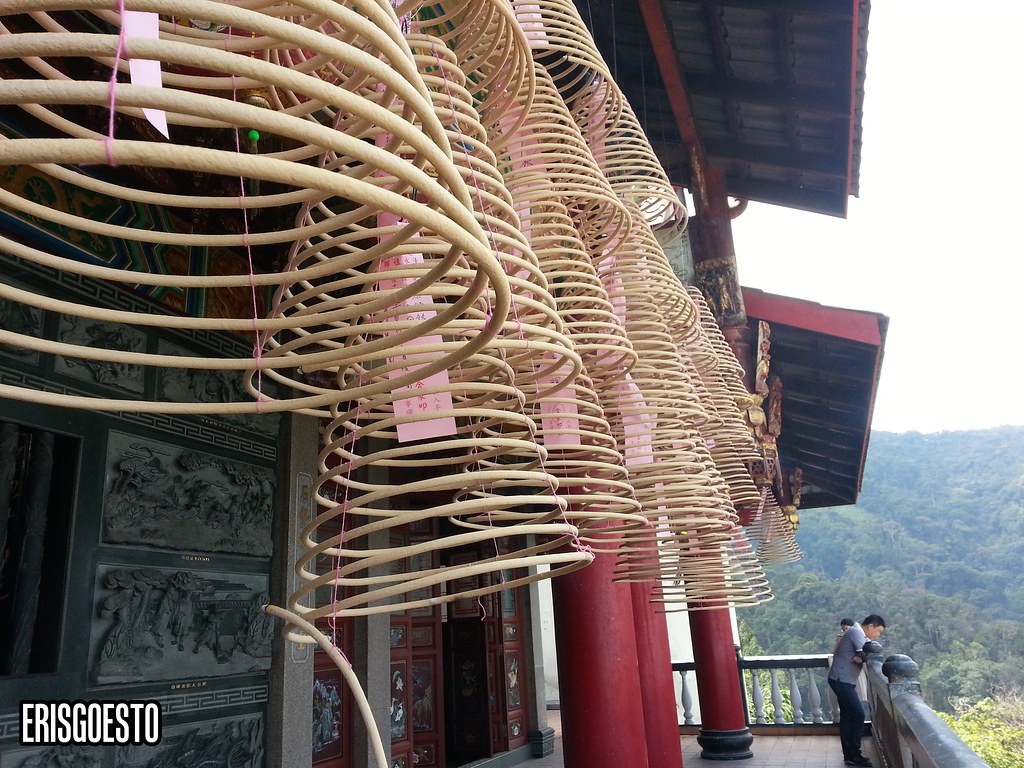 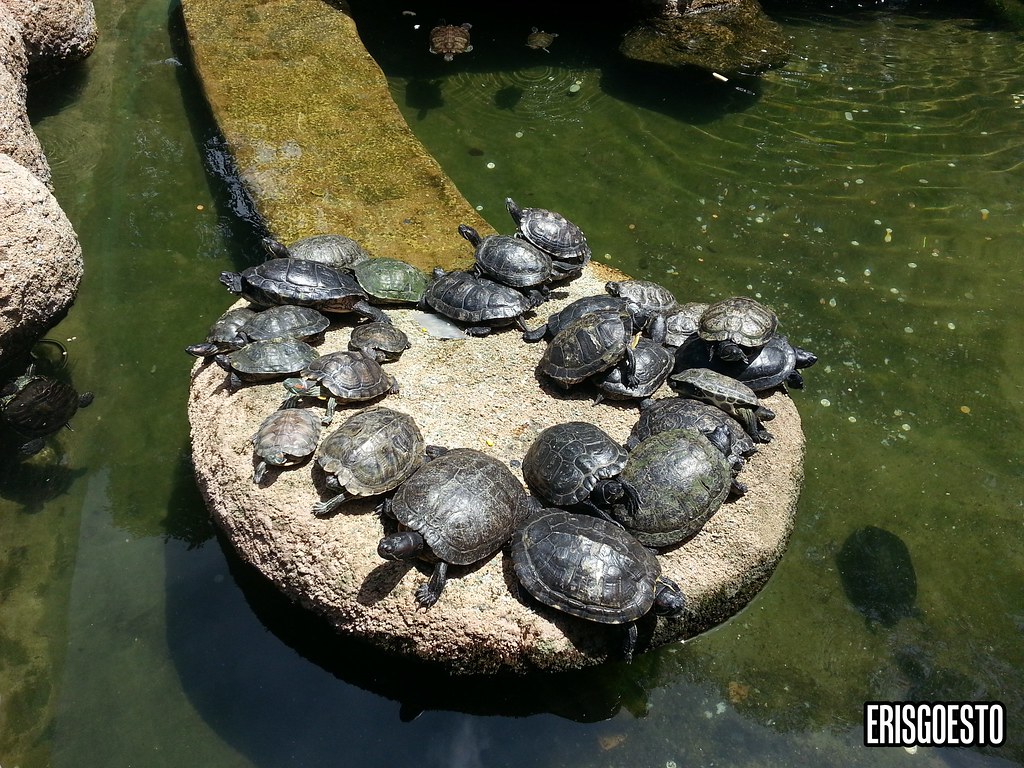 Turtle pond! Despite being so slow and sleepy on land, they were really fast in the water. =)

Welp. It’s been a refreshing getaway to Genting for the weekend. Then it was back to work.