One of Bangkok’s oldest temples, Wat Pho is a must visit if you love architecture. Built in the 16th century, this vast royal temple complex boasts a splendid design, with towering spires, colourful glazed-tile roofs and grand halls. The temple is home to the largest collection of Buddha’s images in Thailand (over 1,000), the most famous being a 46-metre-long giant reclining Buddha. It is also the birthplace of the traditional Thai massage, which is offered to visitors as a communal experience at an open-air pavilion. 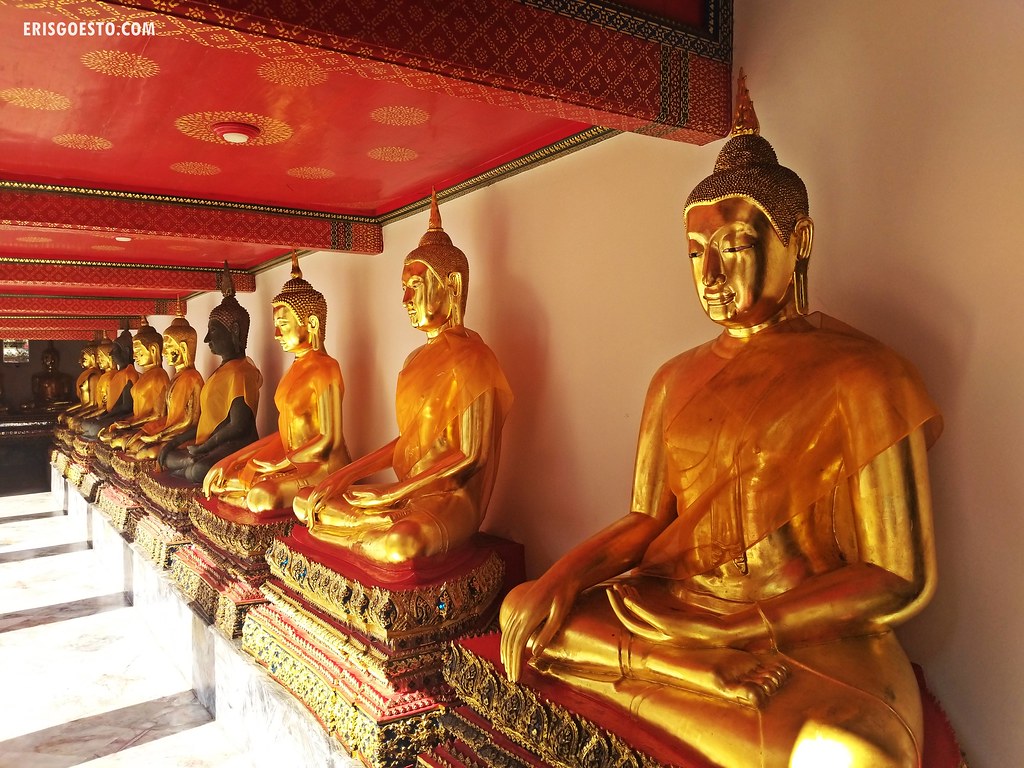 The temple complex covers over 80,000 square metres, so it’s best to allocate several hours if you wish to fully explore the place. There are numerous pavilions, hallways, shrines and prayer halls to within, so tourist maps (located at various points throughout the temple) come in handy ! 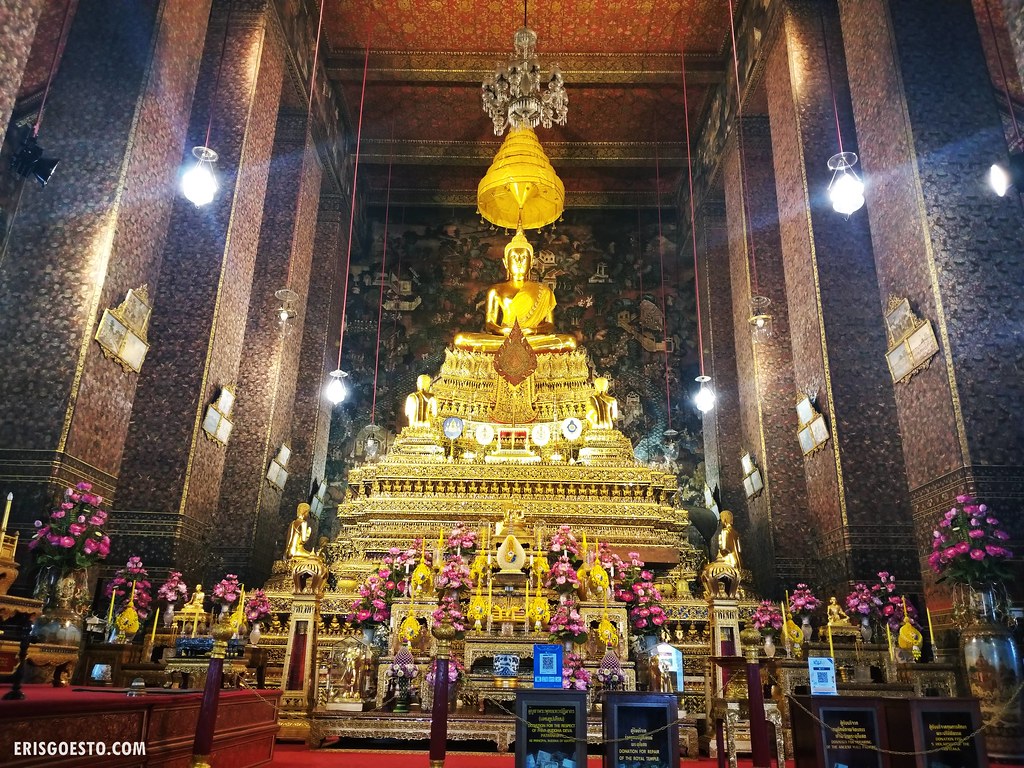 The ordination hall, or Phra Ubosot, is where monks perform rituals. The hall looked absolutely stunning, with maroon and gold floor to ceiling motifs and a glittering gold and crystal dais, upon which was seated a gilded Buddha dating back to the Ayutthaya period. The statue was ‘shaded’ by a golden, tasseled nine-tiered umbrella, a symbol of Thailand. The ashes of the ruler Rama I can also be found under the pedestal. 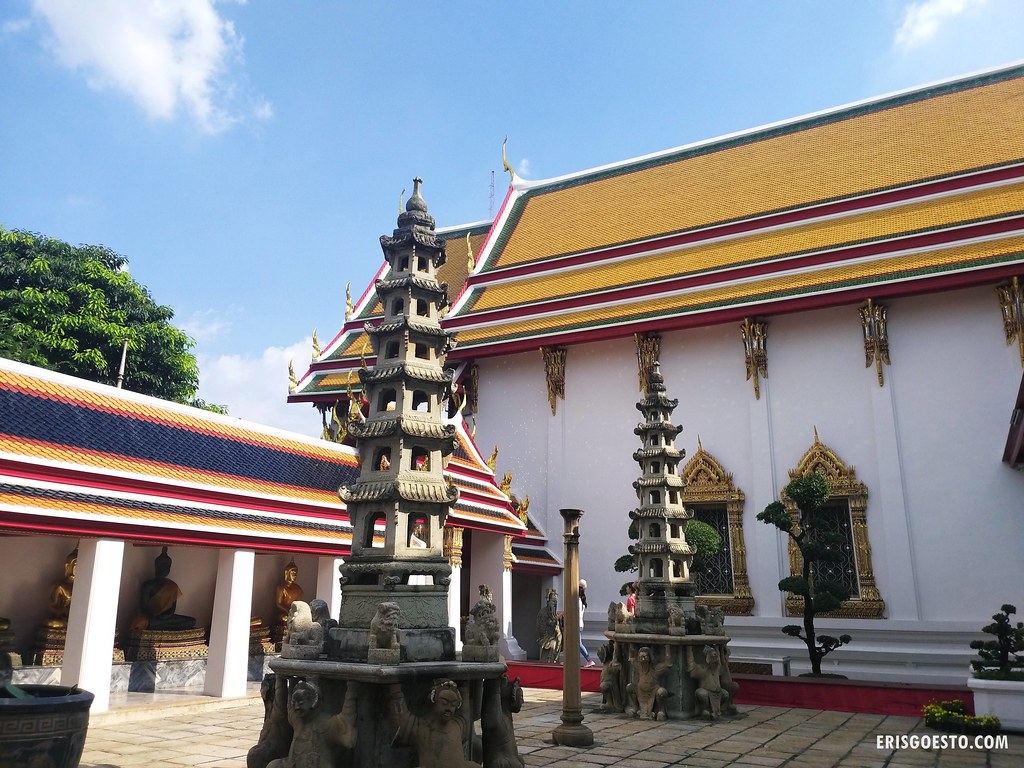 Making our way around the temple complex, we could see influences from various cultures, such as these Chinese-style stone pagodas. There were figures and statues of Chinese deities as well. The colour of the tiles on the roof differed from building to building, but most had orange/gold as the primary shade, accentuated by blue, red, white and green. 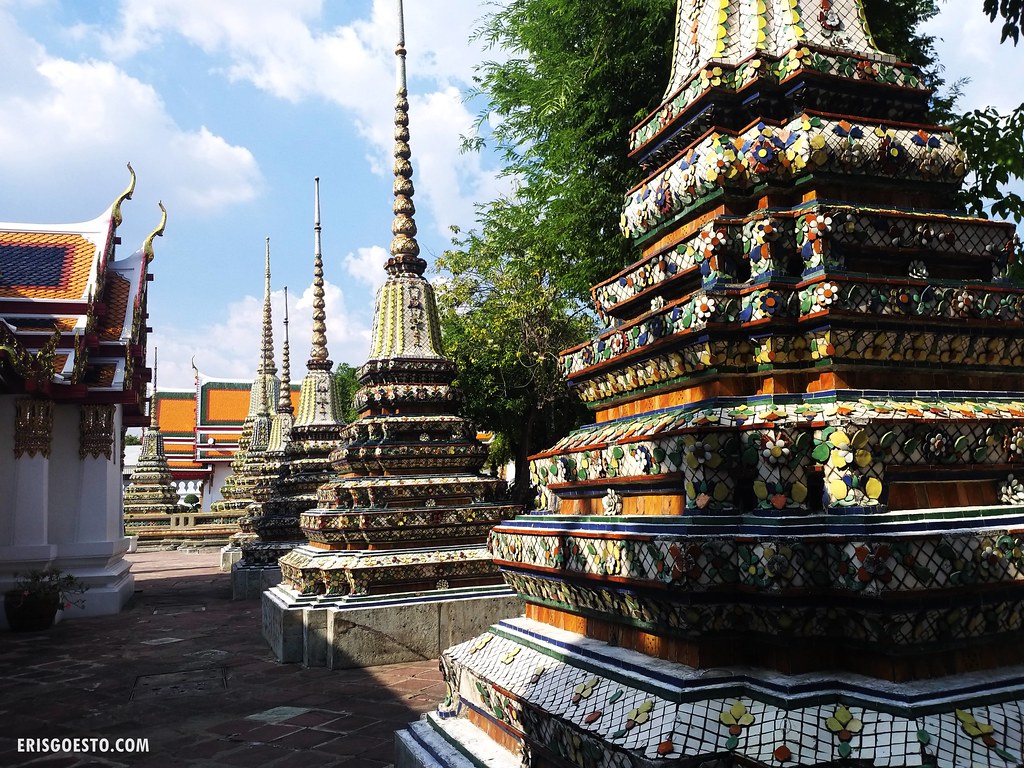 Chedis are an alternative to stupas in Thailand, and there are hundreds of these within the temple grounds. The smaller ones rise up about five metres, and are decorated with floral or geometric motifs from the base to the top.

Beyond being just a religious place, Wat Pho was also intended as an education centre, so visitors will find murals and engravings on granite slabs throughout the complex with texts and illustrations depicting subjects such as history, medicine, health, custom, literature and religion. 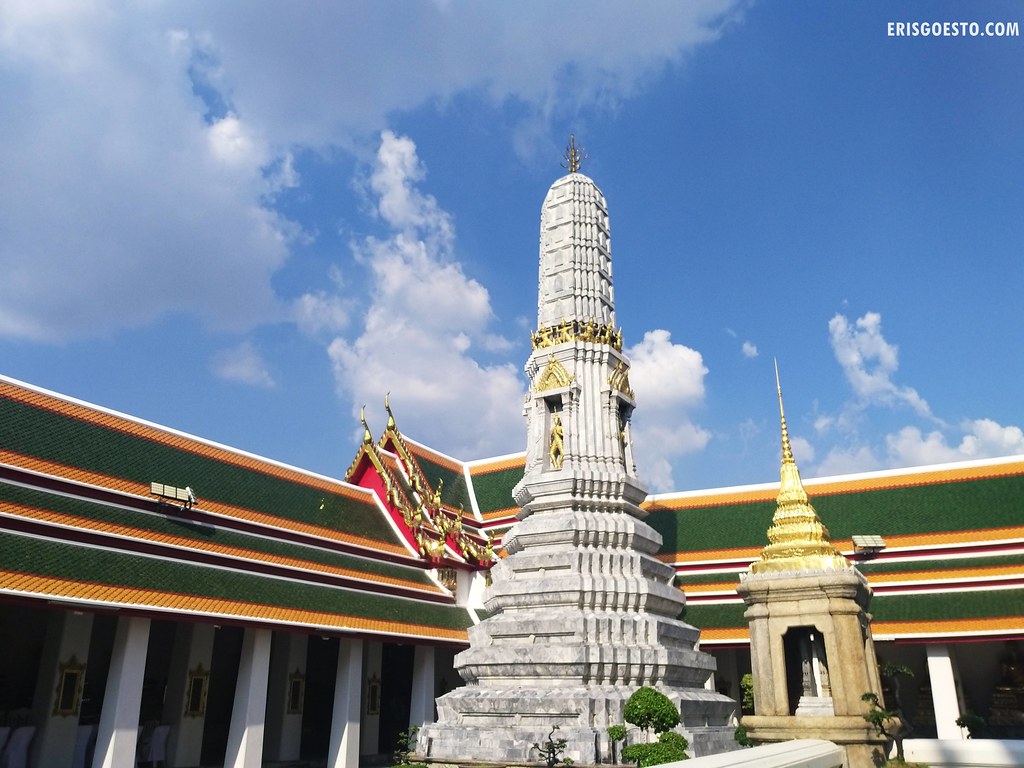 Marble towers called Phra Prang, which are found at the corners of one of the main courtyards. 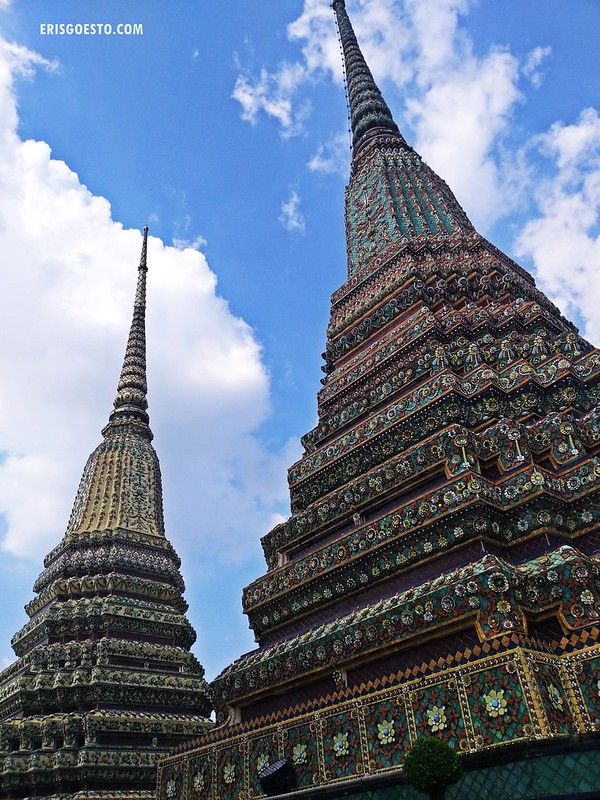 Aside from the Reclining Buddha statue, I found the Phra Maha Chedi Si Rajakarn – a grouping of four large chedis – to be most impressive. Located within a courtyard, their sharp spires towering over their surroundings, these 42-metre-high chedis are dedicated to the first four Chakri kings: Rama I, Rama II, Rama III and Rama IV. The chedis each have a distinctive look and are covered in beautiful tiles, in green, yellow, white and blue. 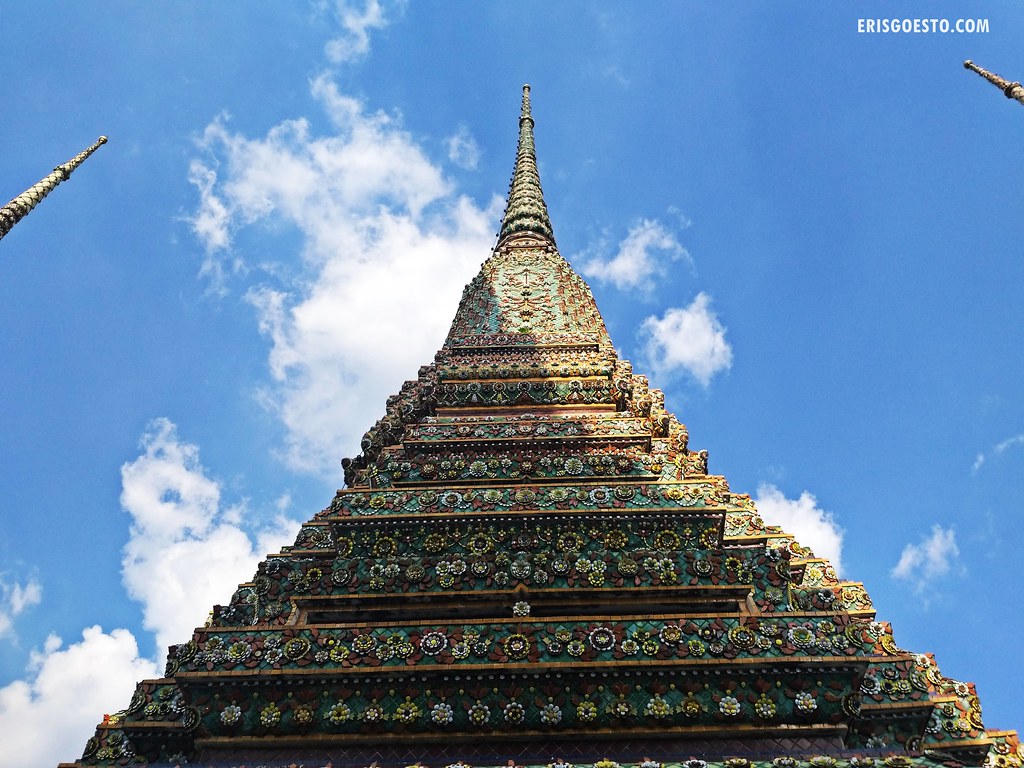 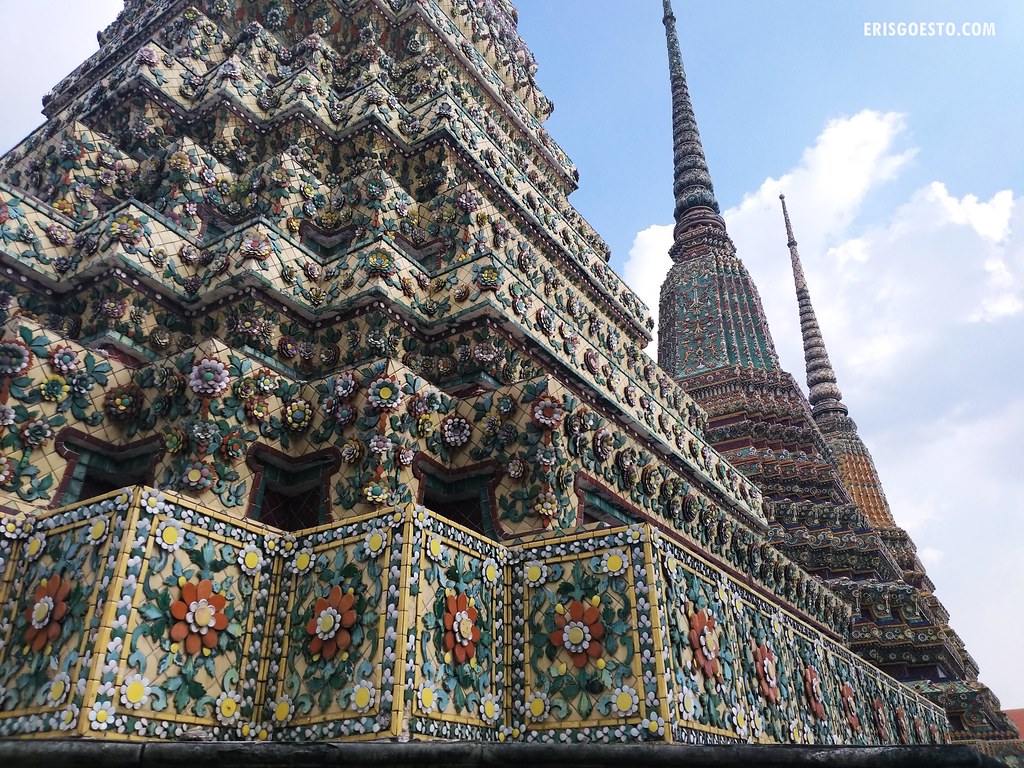 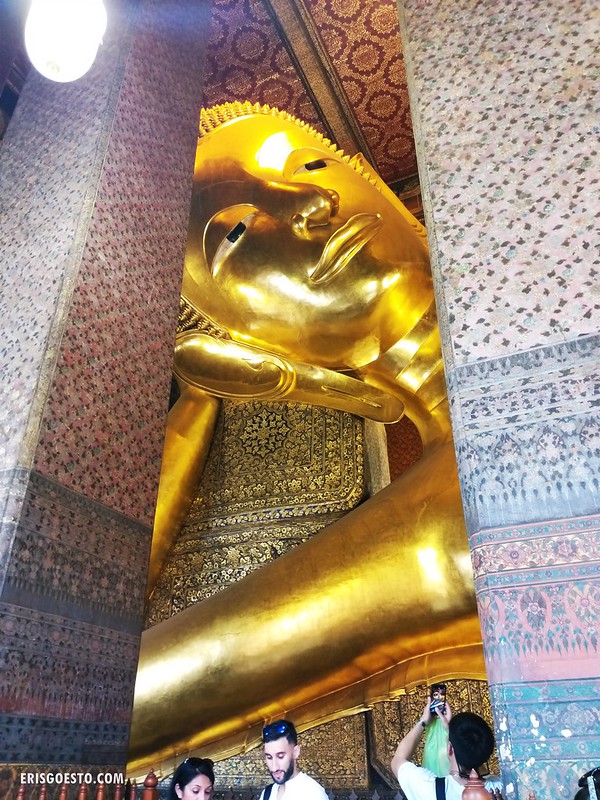 Inside one of the buildings called Viharn Phranorn, we finally came to the temple’s famed golden reclining Buddha. It was humongous, filling up one entire side of the hall, the statue’s long legs stretching from one end to the other. There were nooks all along the passageway for visitors to stop and take photos, while on the right were bowls where devotees can drop coins as part of a prayer ritual. The walls were decorated from top to bottom with elaborate murals, and there were artists doing touch up on places where they had faded. 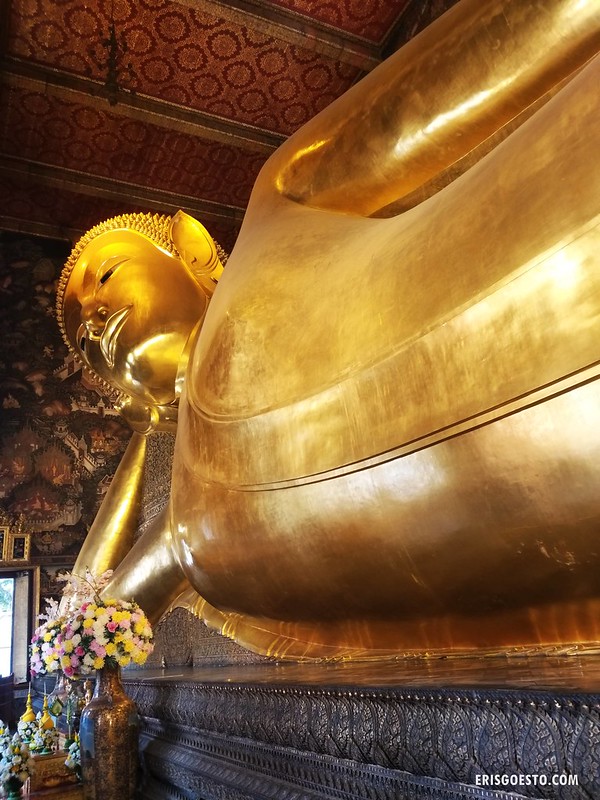 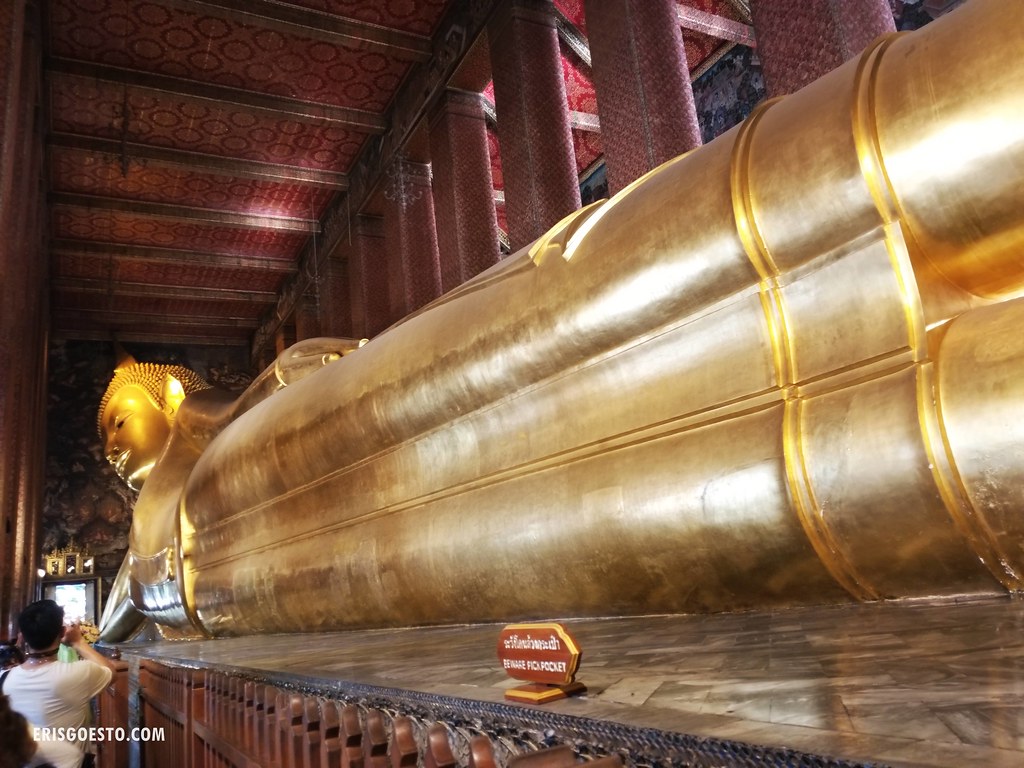 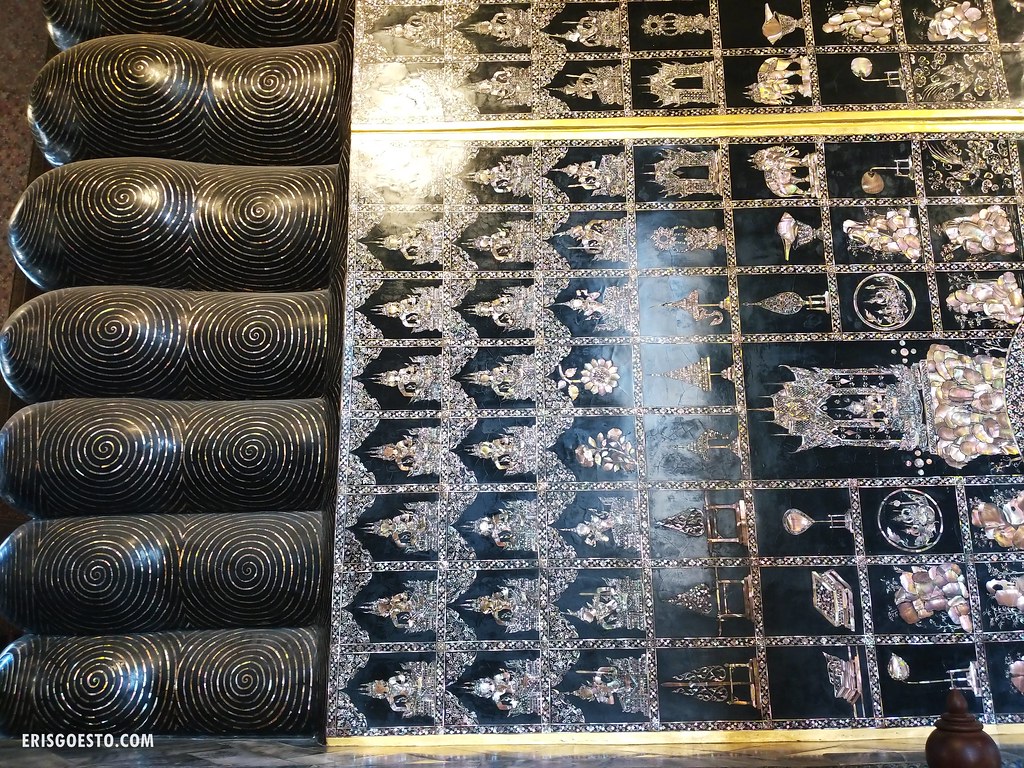 The feet are decorated with laksana, Sanskrit symbols and texts, some of which have been inlaid with mother of pearl.

Wat Pho is located right next to the Grand Palace, so you might want to pair your trip with a visit there. The entrance fee for the Grand Palace is quite pricey, which is why we opted not to.

Take the BTS Skytrain to Saphan Taksin, then a Chao Phraya express boat at Taksin pier to Tha Tien Pier.

There is an entrance fee of 200 baht to get into Wat Pho.