[UPDATE: This restaurant is permanently closed.]

The Spanish food scene in KL may not be as well established as, say, Italian or French – but it has been steadily gaining popularity in the last few years. One of the newer places is Tapas Club @ Pavilion Kuala Lumpur, a lively spot where you can share a few glasses of wine with friends, and of course, lots of tapas. 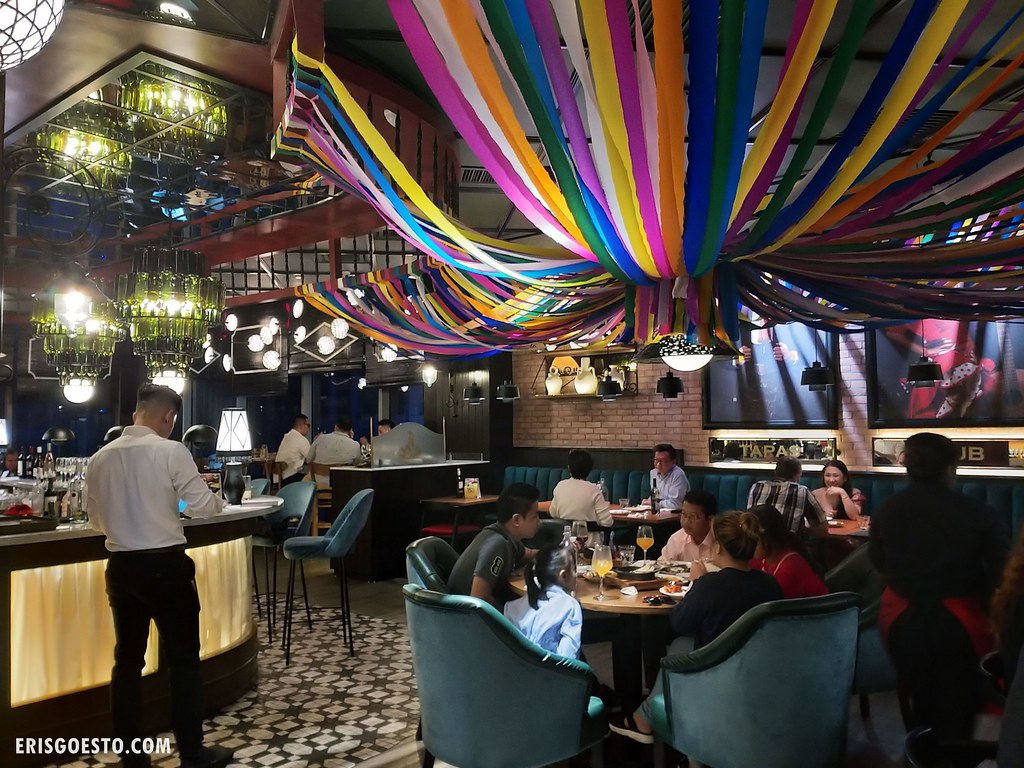 Prior to this visit, I had literally zero experience with Spanish food, so I was surprised (and pleased) to have won an Instagram contest organised by the restaurant, to host two people for a Wine Tasting (worth RM120++ each). Of course I had to bring N; him having worked at a wine company and also being from the Philippines where they have a strong Spanish influence in their cuisine.

Two hours later after a horrendous jam (the roads were flooded in the city), we were finally at the restaurant. Already I loved the ambience – the wall racks lined with fine wines, the colourful streamers hanging from the ceiling which lent the whole space a festive vibe, as well as the cosy, ambient lighting. 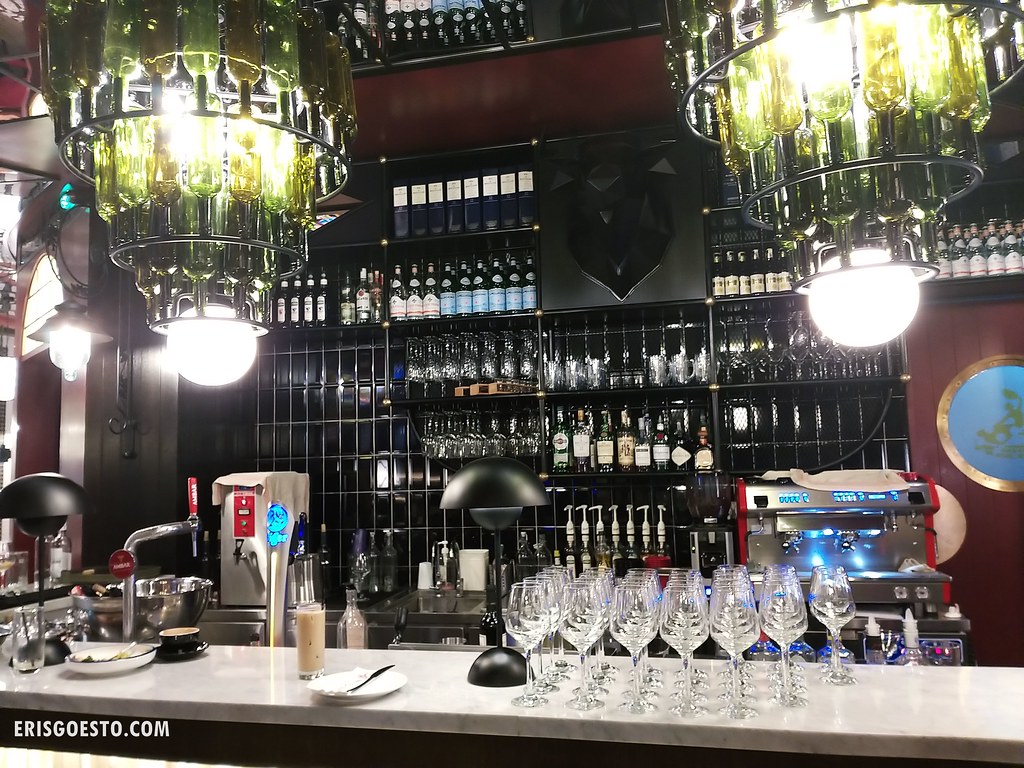 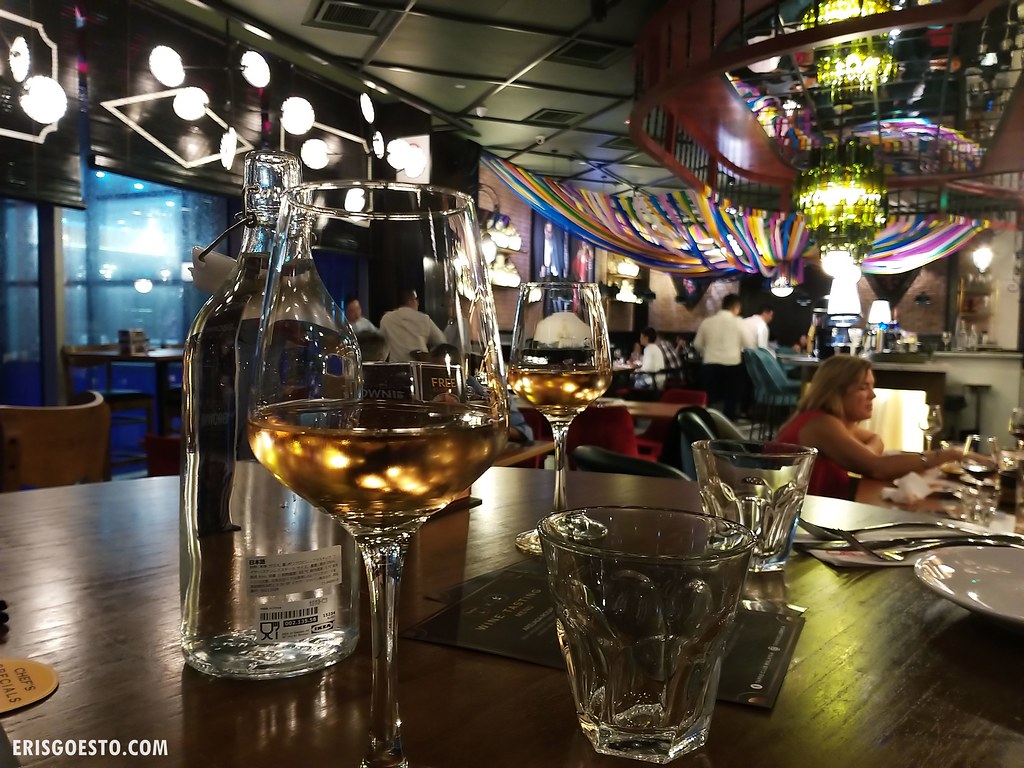 We had four wines for the night: Arzuaga Rosae 2018, Fan D Oro 2017, La Planta 2017 and Tinto Arzuaga Crianza 2016. I’m not much of an alcohol drinker, but if I had to, I prefer wine over other spirits. The first was the Arzuaga Rosae, a mild rose-wine from the Ribera del Duoro region, one of Spain’s “11 quality wine regions”. It was fruity and light, with a long finish and subtle floral hints. 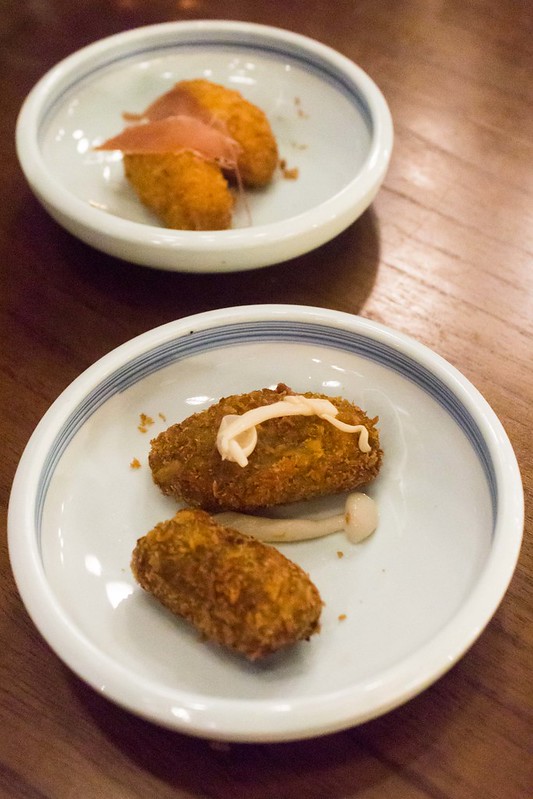 The wine tasting also included three complimentary plates of tapas and a plate of cheese. The ham and mushroom croquettes were extremely addictive, with a crispy, breaded crust and a creamy blend of ham and mushroom, respectively. 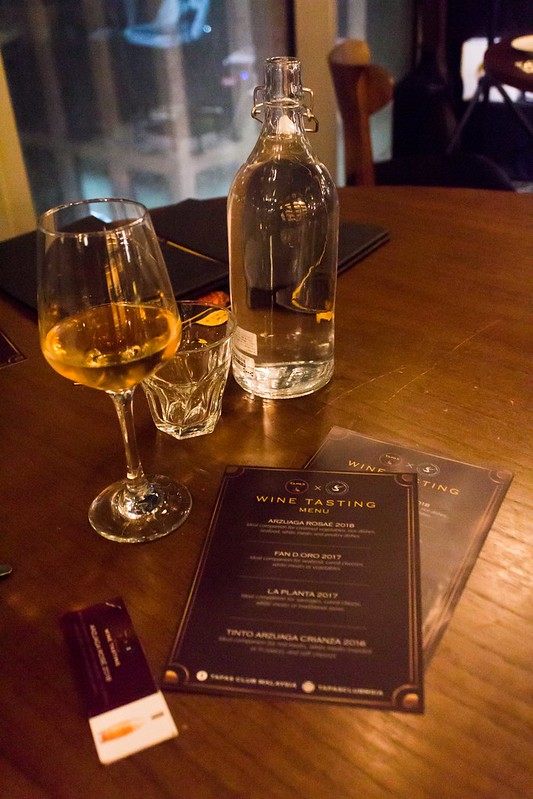 Fan D Oro 2017 is a creamy, balanced white wine that is ideal for seafood, cured cheeses, white meats and vegetables. We paired it with Spanish omelette and cod fish, as well as the cheese which came served with crackers. The latter was absolutely divine; drizzled over with a dash of olive oil, the block of cheese was rich and more creamy than salty. 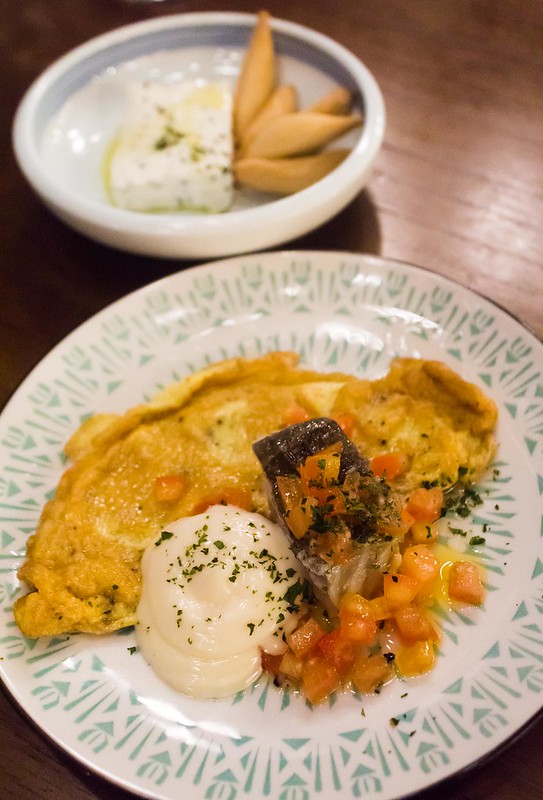 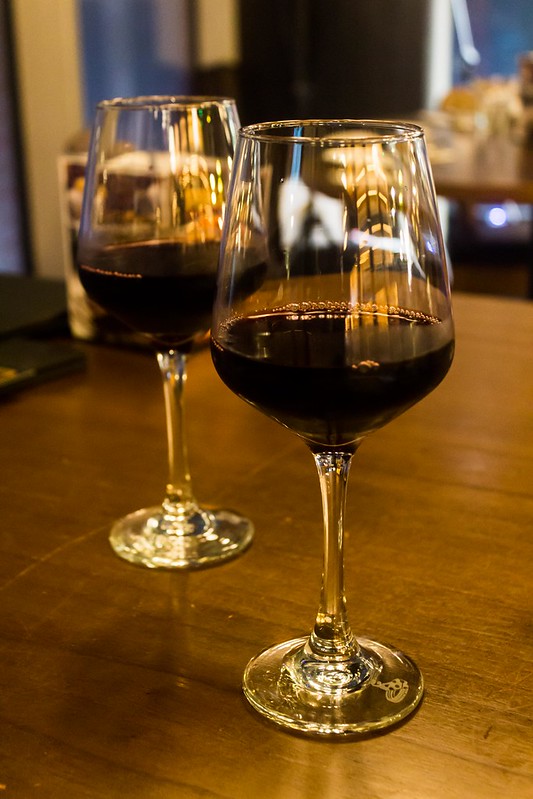 La Planta 2017 was N’s favourite. He drank both his glass and mine. I had stopped drinking by then (designated driver + bad with alcohol; I break out into hives). 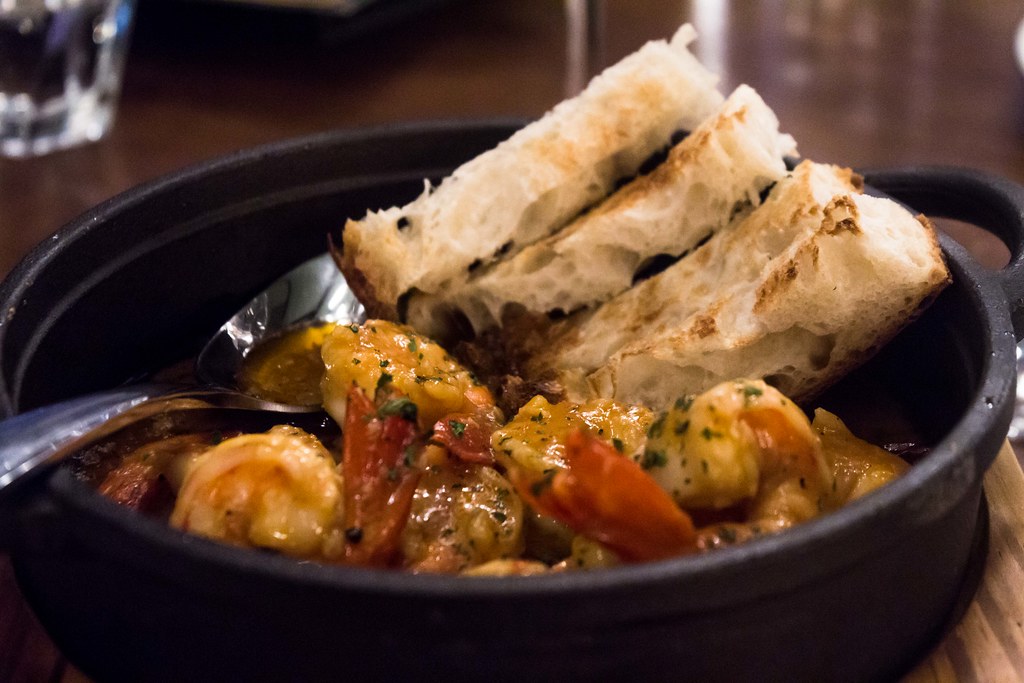 If you’re ever here and could only order one tapas – this is it. Everything we had was tasty, but this was easily the best dish of the night. Not only were the prawns sizable (and peeled, for all you lazy folks out there), they were also coated in a beautifully rich and addictive garlic sauce. I know tapas is all about sharing, but this was one of those dishes I could have finished all on my own. Maybe order a couple more if you’re here with friends! 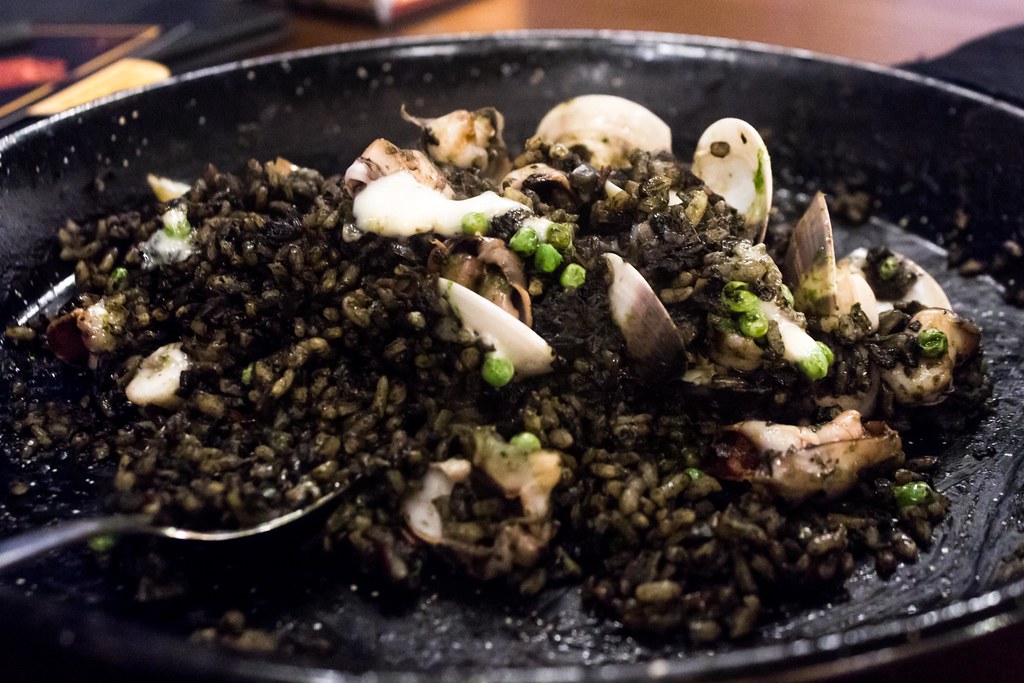 For mains, we had the Arroz Negro (squid ink) paella (RM68). Served in a huge pan with squid and clams, the dish could easily feed two or three people. The seafood flavour was actually pretty subtle, and the rice had a great texture. Of course, the best bits were the soccarat, which is the hardened layer at the bottom of the pan. 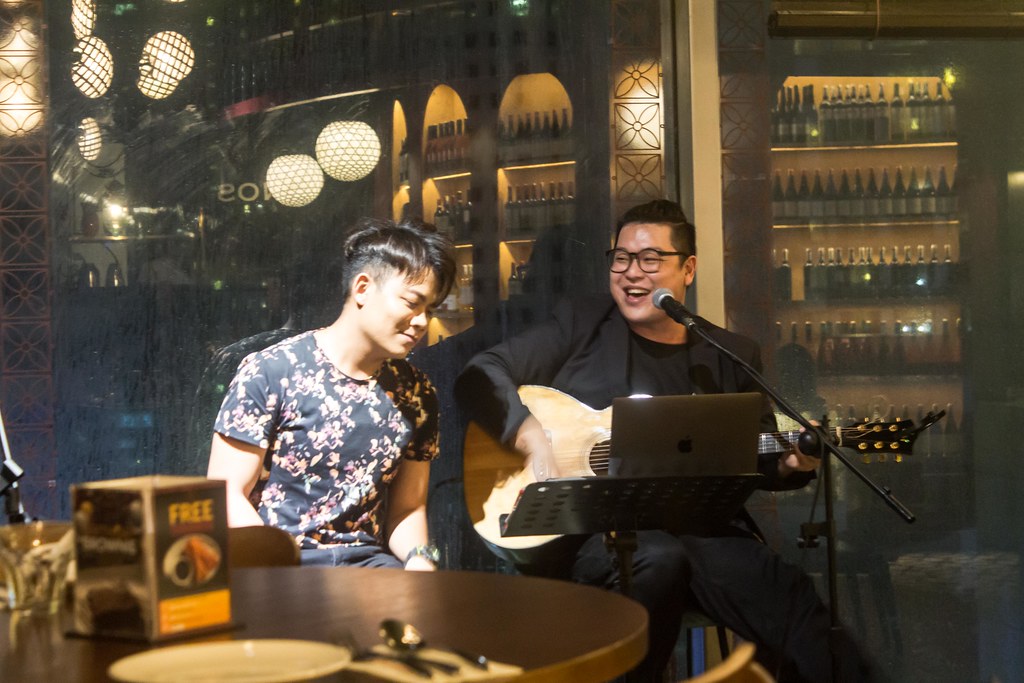 We also had entertainment from these two very talented chaps.

We thoroughly enjoyed our first visit to Tapas Club, and will definitely be making a return trip soon. Even if you’re not a wine drinker, the food here is awesome and tastes authentic. A great place to get acquainted with the flavours of Spanish cuisine.

Thank you very much again for hosting us!

*Photos not watermarked taken by N.

San Sebastian Church is the only all-steel church in Asia and the only prefabricated steel church in the world. Located on a quieter side of Quiapo, the church site was first established in the 1600s, but earlier buildings were destroyed in a series of fires and earthquakes. The current one dates back to 1891 and features a Gothic Revival architecture style – quite distinct from other churches in Manila.

Its mint green facade, coupled with twin spires, is an instant eye catcher. It was said to have been inspired by the Gothic Burgos Cathedral in Spain.

I guess people were tired of having the church razed, so the new one was made to be fire-proof and earthquake-proof as much as possible. 52 tonnes of prefabricated steel sections were made in Belgium and shipped to the Philippines, while the stained glass was imported from Germany with local artisans putting on the finishing touches. All in all, this magnificent structure is the perfect example of European engineering married with Filipino artistry and culture.

Adjacent to the church is a college managed by the church committee. established in 1941.

Stepping inside, I was impressed by the design, which reminded of Gothic churches in Europe. They had just finished mass so the mini chandeliers, dangling in two rows above the church pews, were lit up – casting a warm and cheerful glow to the halls somber interior. Pillars rise to the ceiling, forming an arched shape, and at the back is a dome painted over with the original ‘3D’ style of painting or trompe l’oiel.

PS: The pillars are painted over to look like marble and jasper, but they are actually steel (!)

The main altar has an image of Our Lady of Mount Carmel, gifted by Carmelite sisters from Mexico City in the 1600s. The image withstood all the natural disasters that have destroyed previous buildings, but ironically, the ivory head was stolen (by people, always people are the worst culprits) in 1975.

Colourful stained glass on the sides depict scenes and characters from the Bible. Some are so delicate that a simple touch with a toothbrush could cause the designs to fade away.

Sadly, this is not the only thing in danger of disappearing. The building’s materials have rusted over the years due to corrosion, and it’s structural integrity is in danger. Here’s hoping that conservation efforts will be put into place to prevent that from happening.

A pulpit where the priest can deliver sermons. The elevated wooden structure is decorated with elaborate carvings and images.

Stepping into the stretch that is Olvera Street in Downtown Los Angeles feels like walking into a tiny slice of Mexico (albeit a very touristy one!). Most of Southern California was once the domain of Spanish and Mexican governments, so its not surprising to see a large Latino population here. As Malaysia doesn’t have much of a Latin American crowd, visiting Olvera Street and taking in the sights and sounds of its culture was a new thing for me. 🙂

The first thing one notices upon stepping into this historical area is the bright, vivid colours and patterns. Traditional dresses are hung outside squarish, brick shops – and they look all ready to be worn to a fiesta or party! A faint but lively music wafts into the air from someone’s radio.

Stalls selling all manner of clothing and souvenirs line the street. Although it was typical touristy stuff, it was still fascinating to browse through. Bringing a heavy Spanish influence, there were figures of the Virgin Mary and Jesus everywhere. The peddlers weren’t picky though – they also had lots of South American Indian paraphernalia, like Incan and Mayan masks and tribal decorations.

Olvera Street is the oldest section in Downtown LA and was the commercial and social hub for the Mexican immigrant community in the olden days. The present ‘form’ we see has only been around since the 1930s, when a major revitalisation project took place. People applauded the effort, calling it ‘a street which recalls old Mexico’. Today, it is listed as one of the top five streets to visit in the USA.

Brick buildings line the entire stretch of Olvera Street. Most of them are two storied, with the second one slightly lower than the pavement.

It’s a great place to buy souvenirs, like string puppets, skull-faced dolls, guitars and whatnot.

At the very end of the street, the walkway opens up into a plaza. Simply called ‘La Plaza’, it has giant, shady trees surrounding a gazebo that is decorated with strings of colourful flags.

And nearby is the Pico House, a luxury hotel built by the last Mexican Governer of California; which is now a museum. In its golden days, it even had an aviary of exotic birds !

Olvera Street is an interesting place to visit for those who want to know more about LA’s history, as well as an introduction to the culture of the Mexican people in America. Worth a visit 🙂

Take the Metro to Union Station. Olvera Street is just 3mins away.