With its grand, sweeping staircases and elegant interiors, Sheraton Imperial Kuala Lumpur has long been considered the grand dame of five star luxury hotels in the city. Having been around for a number of years, the decor was getting dated – so the hotel underwent a multimillion-dollar facelift, with refreshed dining concepts and more rooms.

The first thing that greets guests upon entering is the grand lobby, complete with sparkling multi-tiered chandeliers, tall cavernous ceilings and elegant decor. The hotel is best known for its wide, sweeping staircases that lead from the ground floor up to the ballrooms, making it a popular venue for weddings and photoshoots. 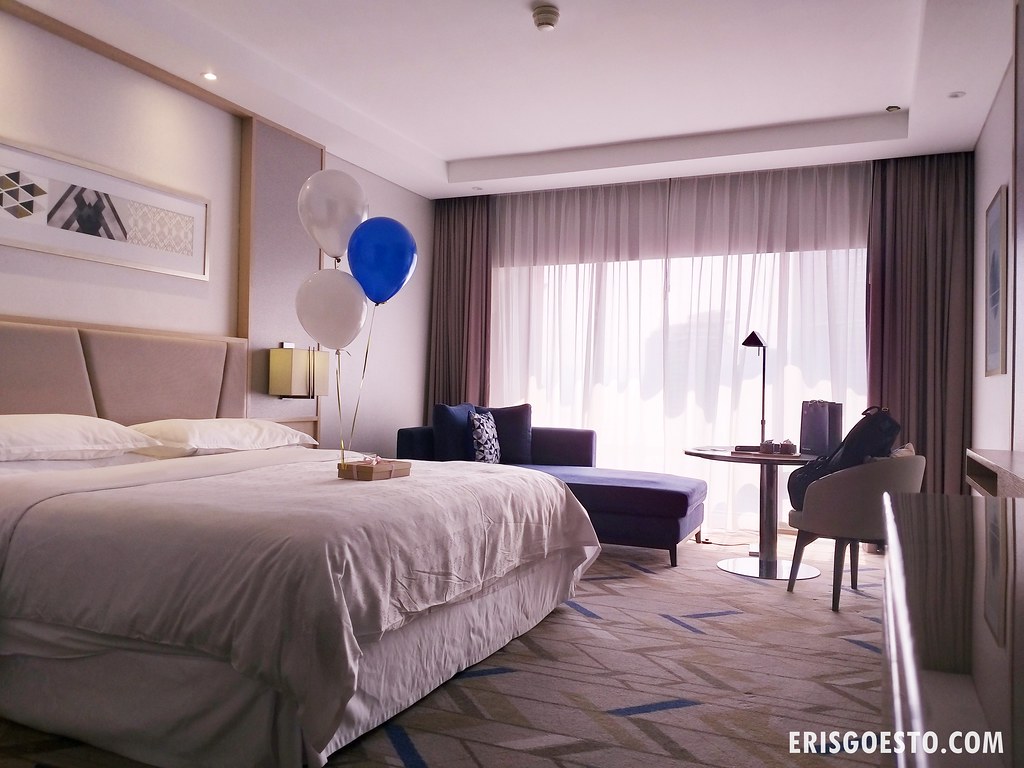 N and I checked in to our Club King room, which was not only spacious but offered a beautiful view of the city. Boasting 42 square metres of space and a comfy king-sized bed, the room’s modern interior was well furnished, with hues of beige, gold and grey. There was a small work table and sofa bed by the floor-to-ceiling window, as well as the usual amenities: large-screen TV, tea and coffee making facilities, Wifi, etc. 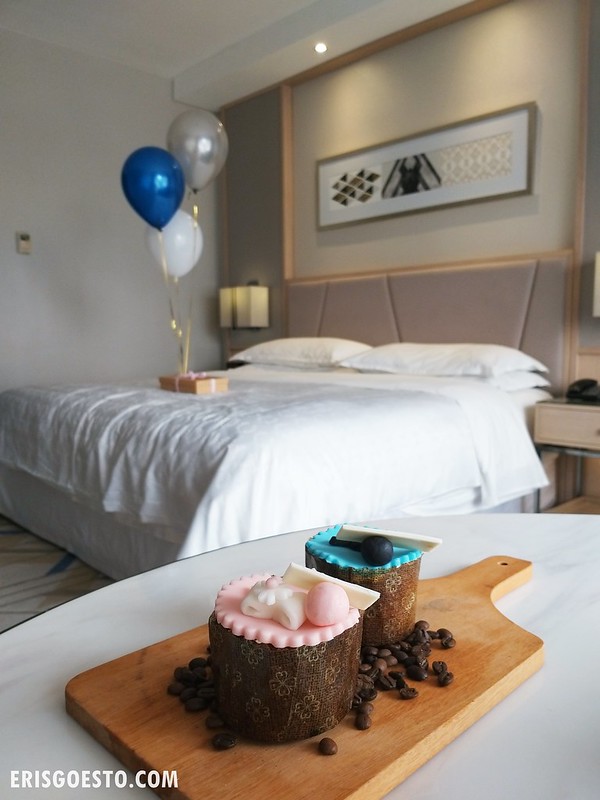 A thoughtful little welcome gift that was much appreciated 🙂 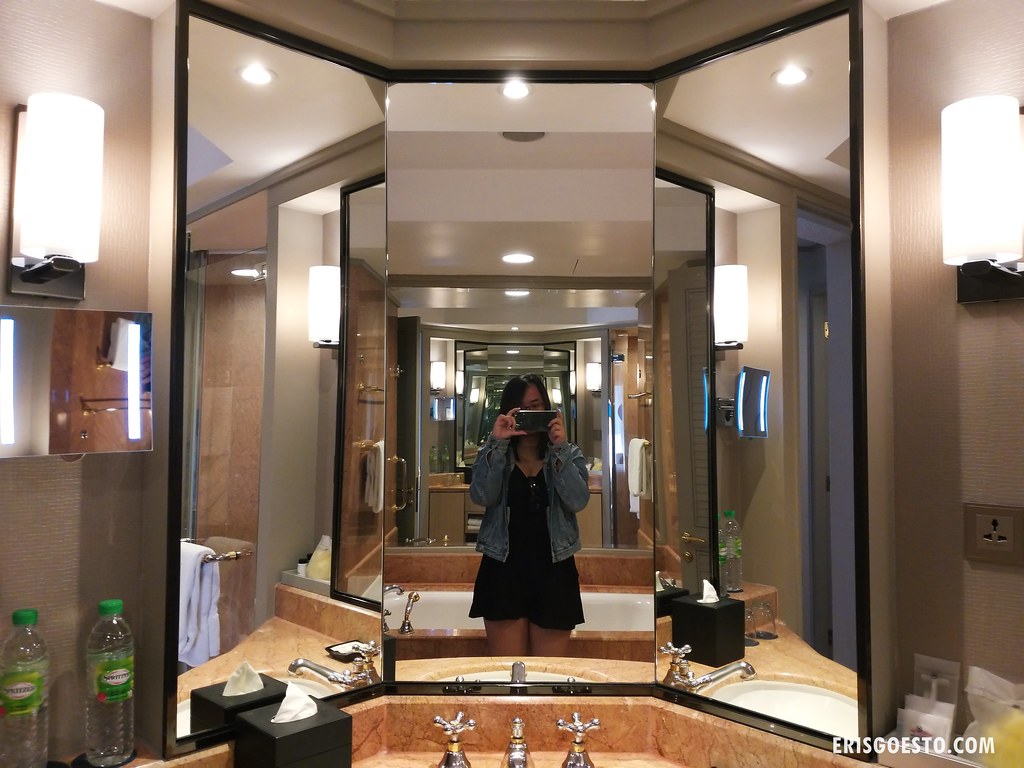 Luxurious bathroom with bathtub and separate shower, lighted makeup mirror, all the works. 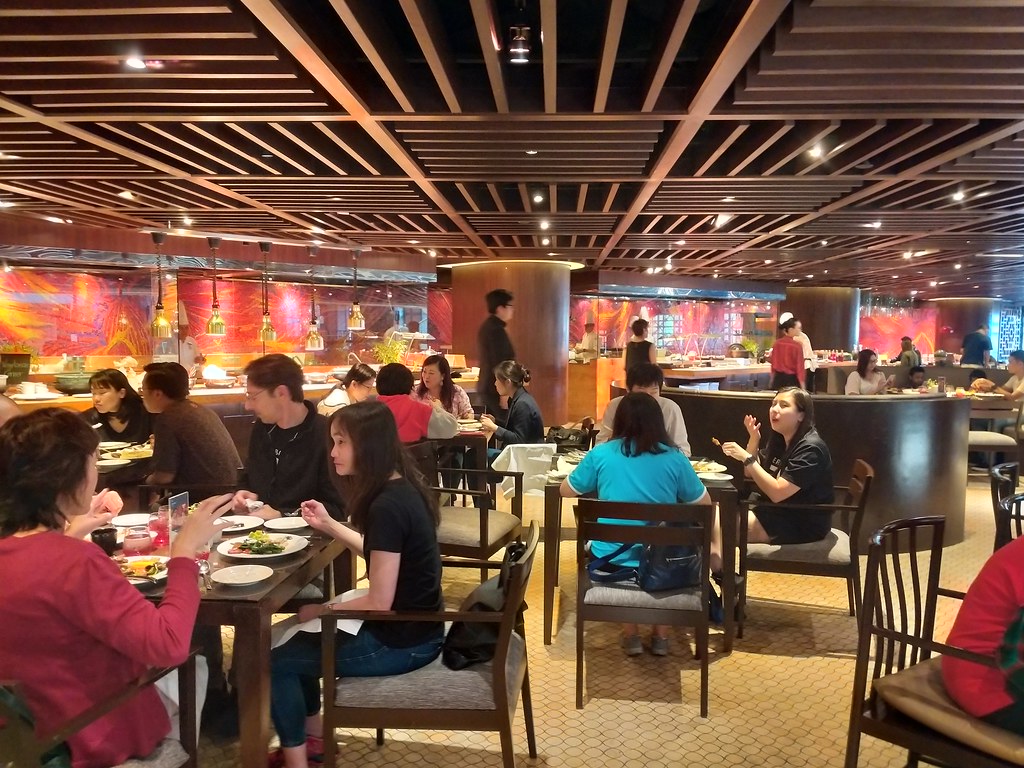 Lunch was at the cheerful all-day dining Essence, which features a good selection of local and international fare. Aside from a cold cuts counter, sushi island and dessert island, the space also hosts a noodle bar where you can customise your own noodles to your liking. Not to be missed is their signature curry laksa, which has a rich, savoury broth with just the right amount of kick to get you sweating, and the chicken satay.

After lunch, you can opt to explore the city, or make use of the myriad of facilities available at the hotel, such as the 24-hour fitness centre, the spa (book in advance to avoid any disappointment, as they tend to be quite full), or the swimming pool with its daybeds, cabanas and gorgeous view of the Kuala Lumpur Tower nearby. 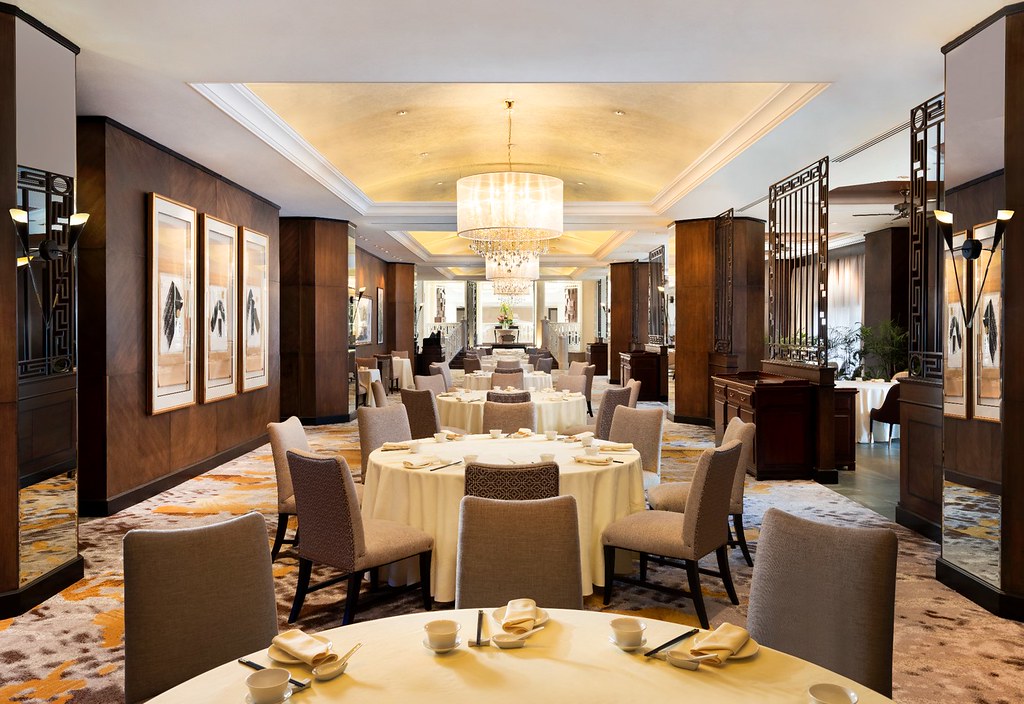 Tuck into a scrumptious, full-course dinner at Sheraton KL’s Chinese restaurant, the aptly named Celestial Court. The restaurant is currently having a promotion called The Fabulous Big Feast, which offers all-you-can-eat ala carte dining for RM148nett per pax, with a minimum of two persons. 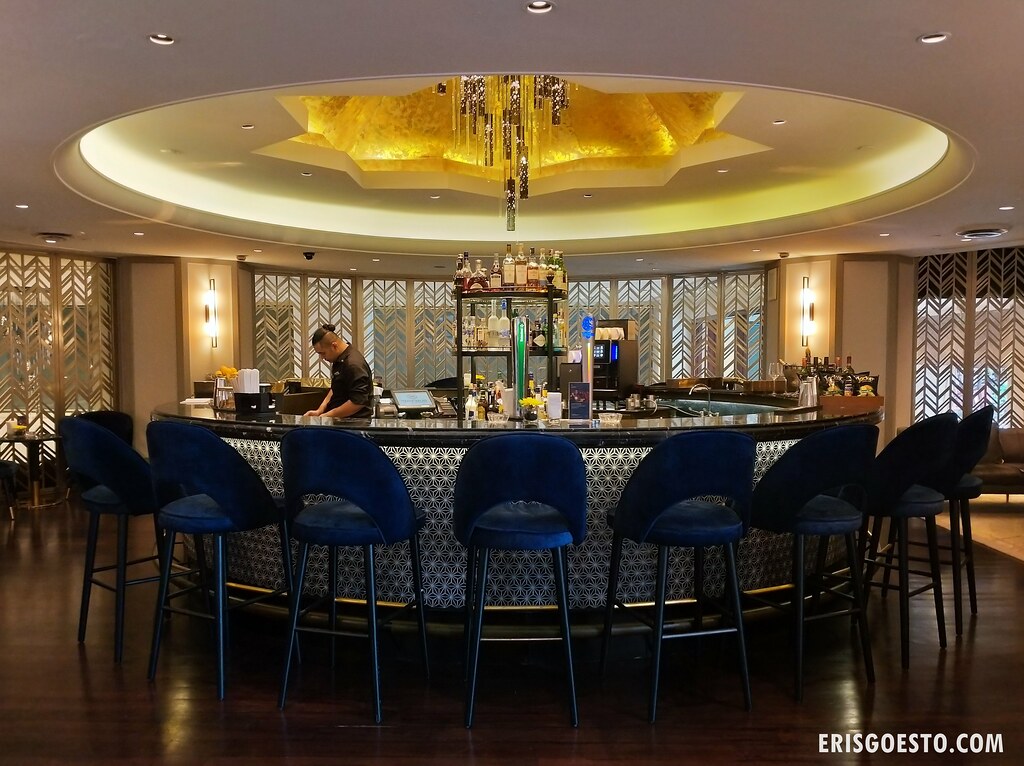 If you still have space, adjourn to the lounge near the lobby for some drinks and music. 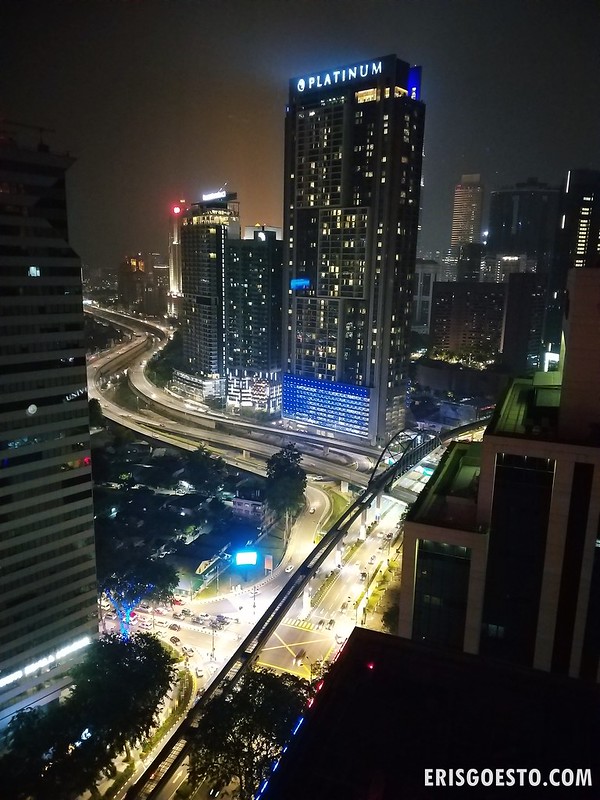 Night view of the city from our window. 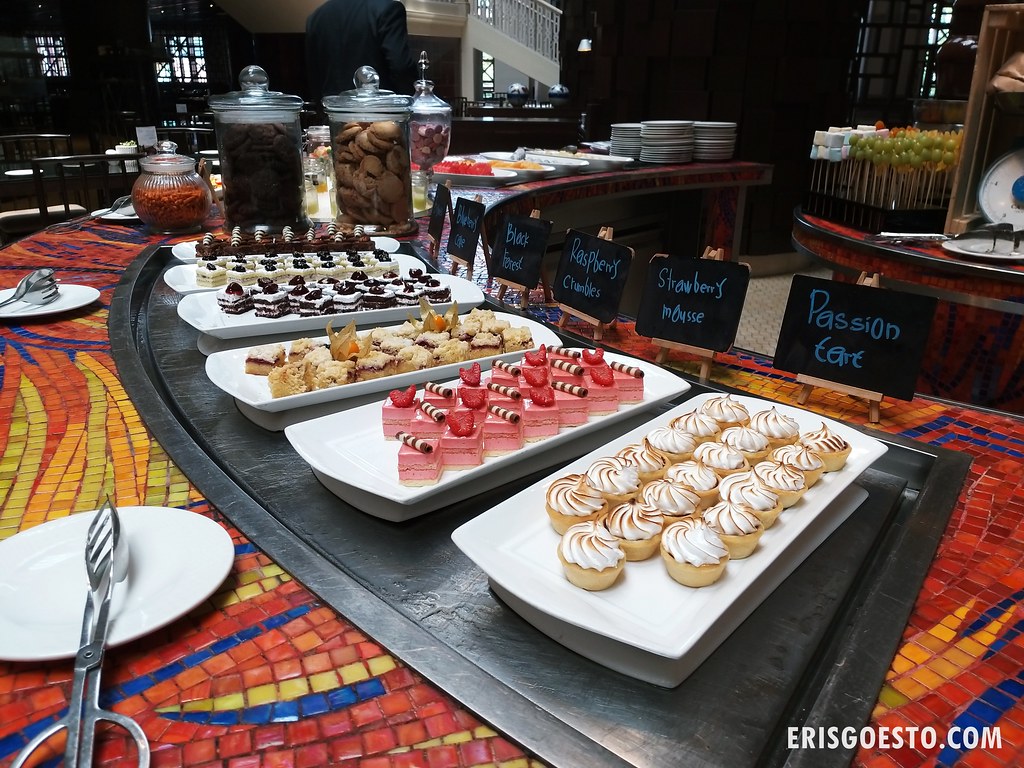 Morning saw us back at Essence for breakfast, with a slightly different line up which included breakfast fare such as pancakes, sausages and ham, porridge, noodles, pastries and cakes, and roti canai. 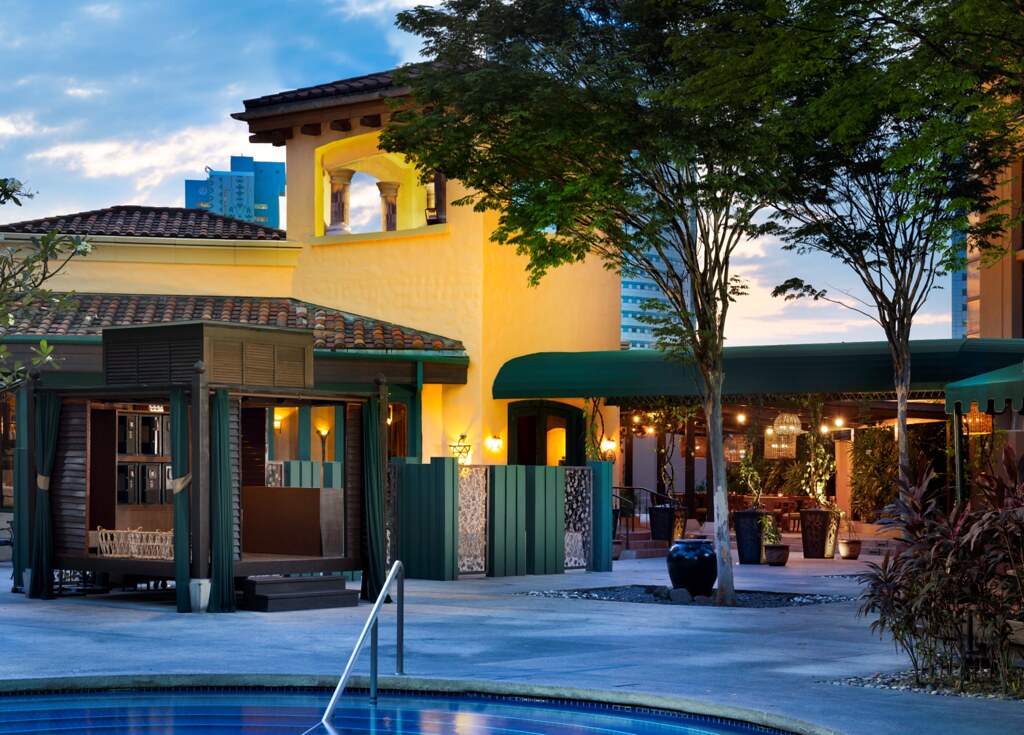 After another dip in the pool and some lazing around in the room, it was time for lunch again (seemed like we were just eating the entire time of our stay, lol) at Villa Danieli, the hotel’s Italian restaurant, which was in a standalone building on its own. I wrote a separate review of the place, so check it out here ! 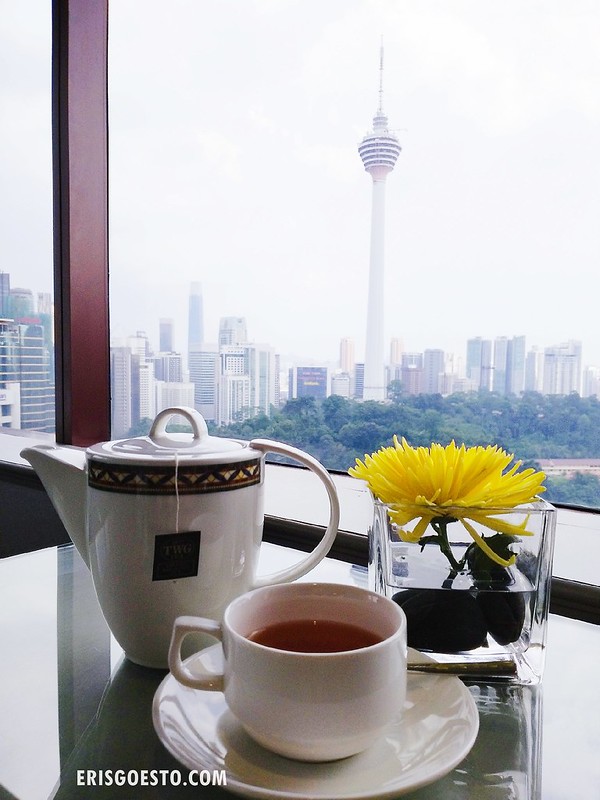 Ending with a nice warm cup of tea at the Club Lounge before our late check out, we were treated to a beautiful day view of the KL Tower atop Bukit Nanas.

It was certainly a relaxing weekend, filled with lots of delicious food! The service was impeccable and we were left wanting for nothing throughout our stay. Best of all, it’s located in a more quiet part of town, but still offers easy access to the bustling Golden Triangle area via the monorail which is just steps away from the lobby.

I confess that I’m not too familiar with Italian cuisine, other than the occasional prosciutto pizza at Enorme (purists will crucify me. Blasphemy!). And while commercial pizza and pasta joints are a dime a dozen in KL, most of these serve bastardised versions that will make any nonna weep – think ‘tom yum’ pizza or salted egg chicken spaghetti, lol. 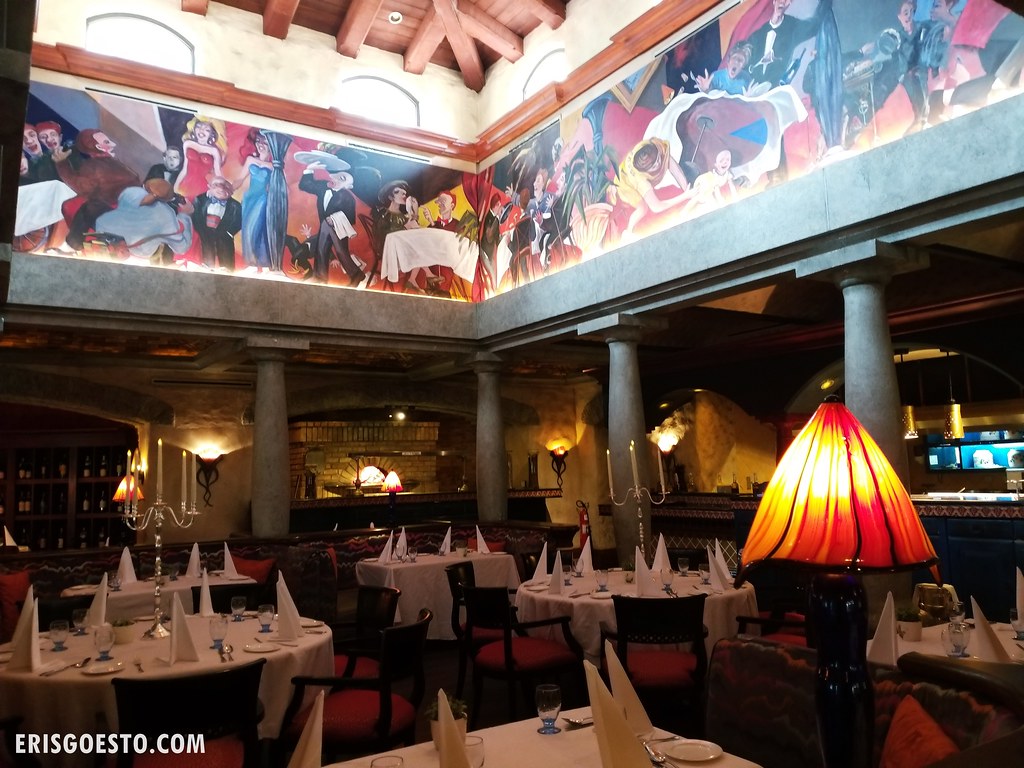 If you’re in for an authentic Italian experience, try Villa Danieli at Sheraton Imperial Kuala Lumpur. A separate building on its own next to the pool, the restaurant offers a slice of Italy right in the heart of Kuala Lumpur, with rustic yet elegant settings and fresh, good food inspired by the region of Tuscany. It’s easy to see why the place is popular for weddings and events – the warm lighting, beautiful frescoes, cosy seats, and liberal use of wood and stone elements manage to pull off expensive, without being pretentious or intimidating. 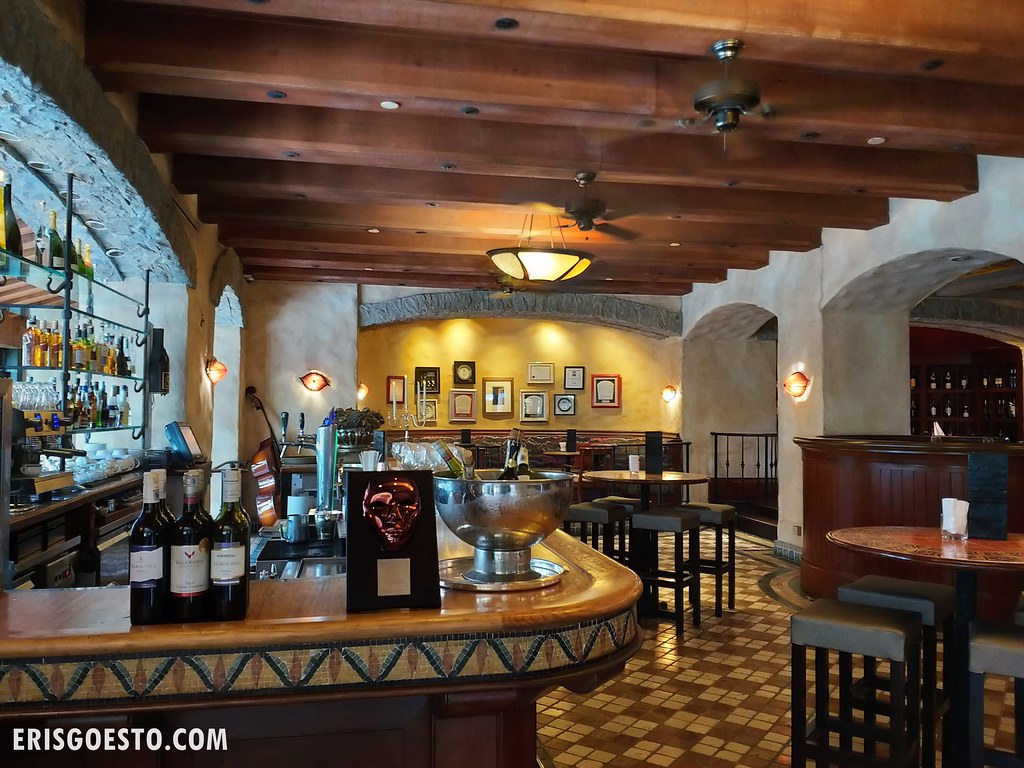 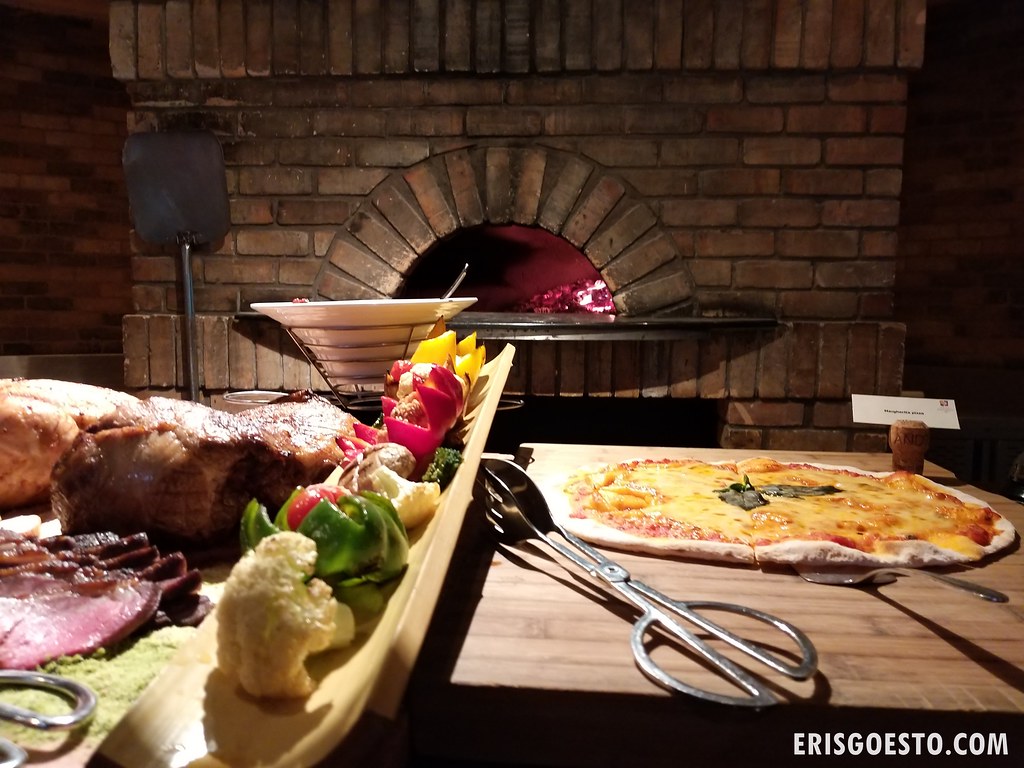 The restaurant has its own wood-fired pizza oven, and guess what? We got to make our own pizza (and eat it too) ! Guided by new resident Chef Federico Bozzo from Genoa, our media group floured, rolled and shaped our way to pizza glory. It’s definitely easier to eat than it is to make – you have to ensure the dough is rolled out evenly in a round shape, not too thin or thick – and then there is also the matter of spreading the tomato sauce with the bottom of the ladle. 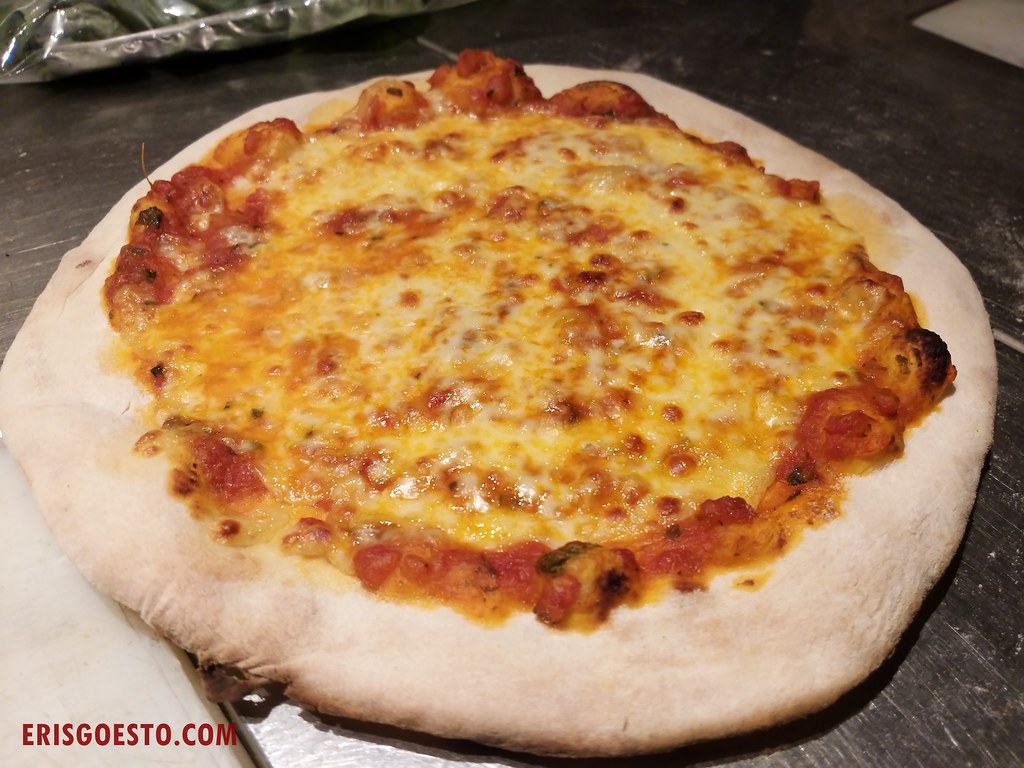 Mine turned out looking like an abomination, but it didn’t taste too bad. lol 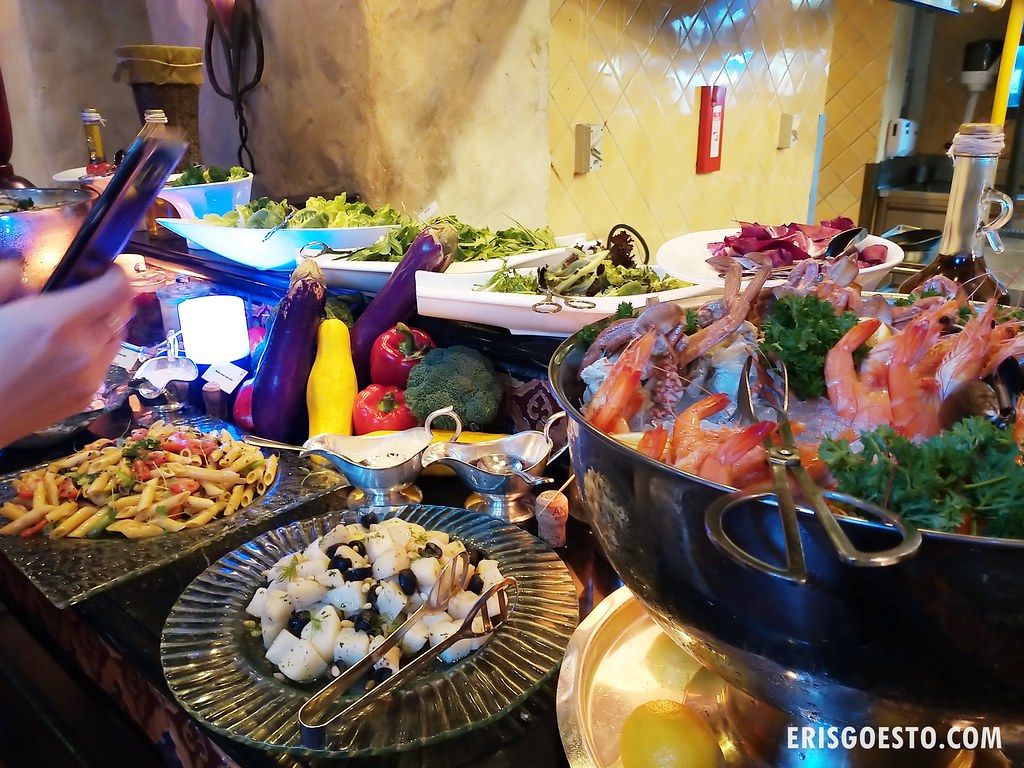 We had our fun, but real food is best left to the experts. Villa Danieli offers a Mamma Mia Brunch special every Sunday from 11AM until 3PM, featuring a large selection of fresh baked pastries and antipasto, ala carte dishes and desserts from RM148nett per adult.

The salad and antipasto bar serves appetisers such as Grilled Mediterranean Vegetable Salad with Feta Cheese, Prawns Salad and Beef Carpaccio, and diners can also tuck into an assorted selection of freshly shucked oysters, clam, prawns and mussels while waiting for their main course. 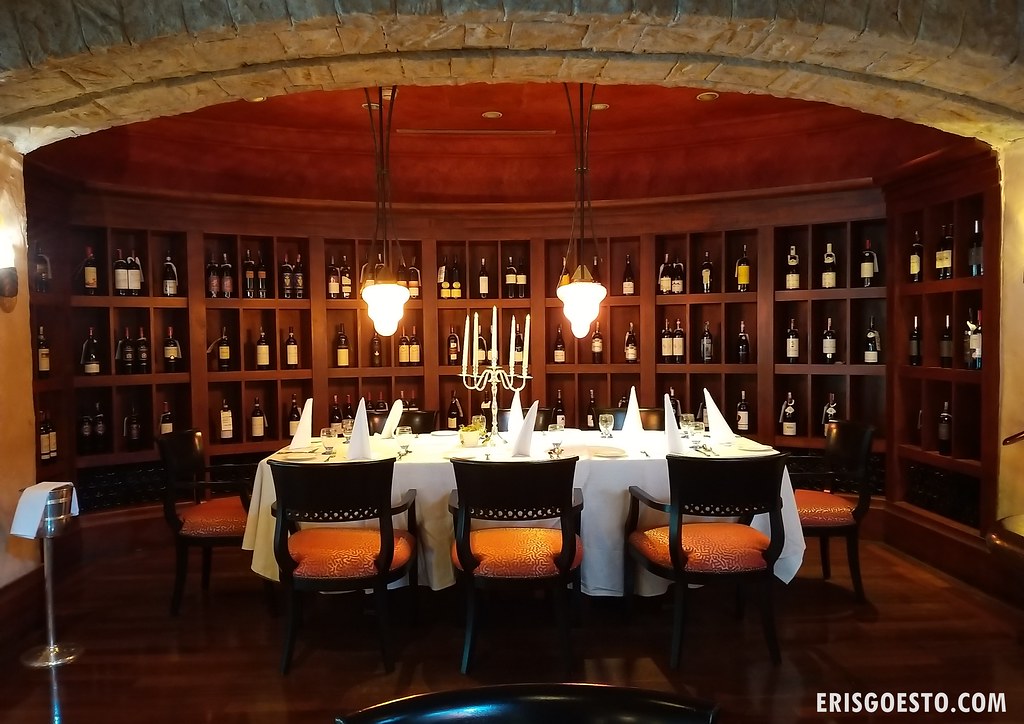 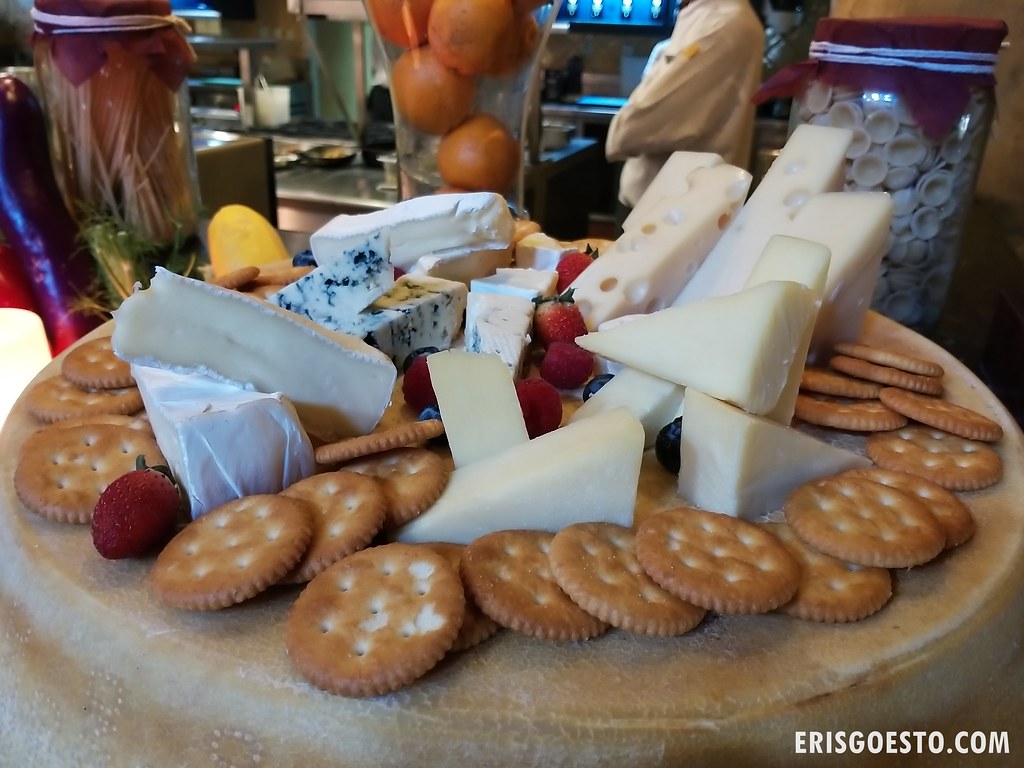 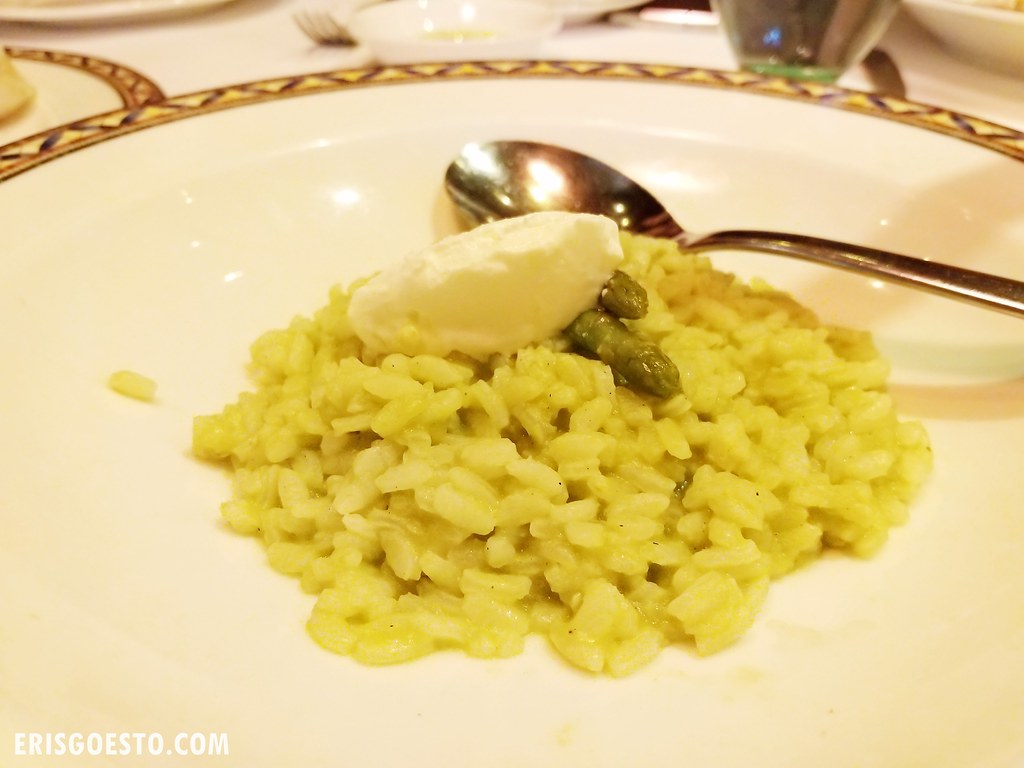 For the mains, we tried Risotto with Asparagus, Peas, Mint and Truffle Oil. The rice was thick and creamy but with an al dente texture, while the truffle oil lent it an element of earthiness. 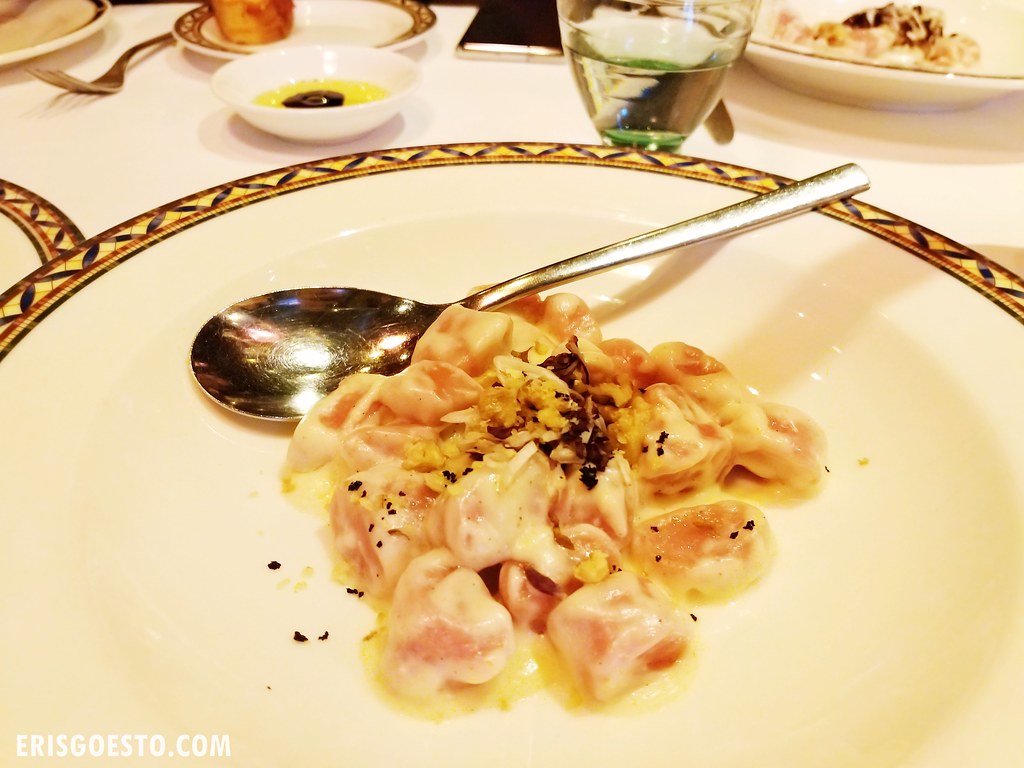 My favourite was the Beetroot Gnocchi with Creamy Gorgonzola Cheese. Loved the chewiness and bite! It had a nice balance of flavours – beetroot was subtle but was not overpowered by the cheese. Other dishes include Fettucine with Spinach Cream, Roasted Cherry Tomatoes, and Chicken, Slow Cooked Oxtail and Creamy Polenta, Mixed Grilled Seafood, and Braised Lamb Shank with Mash Potatoes. 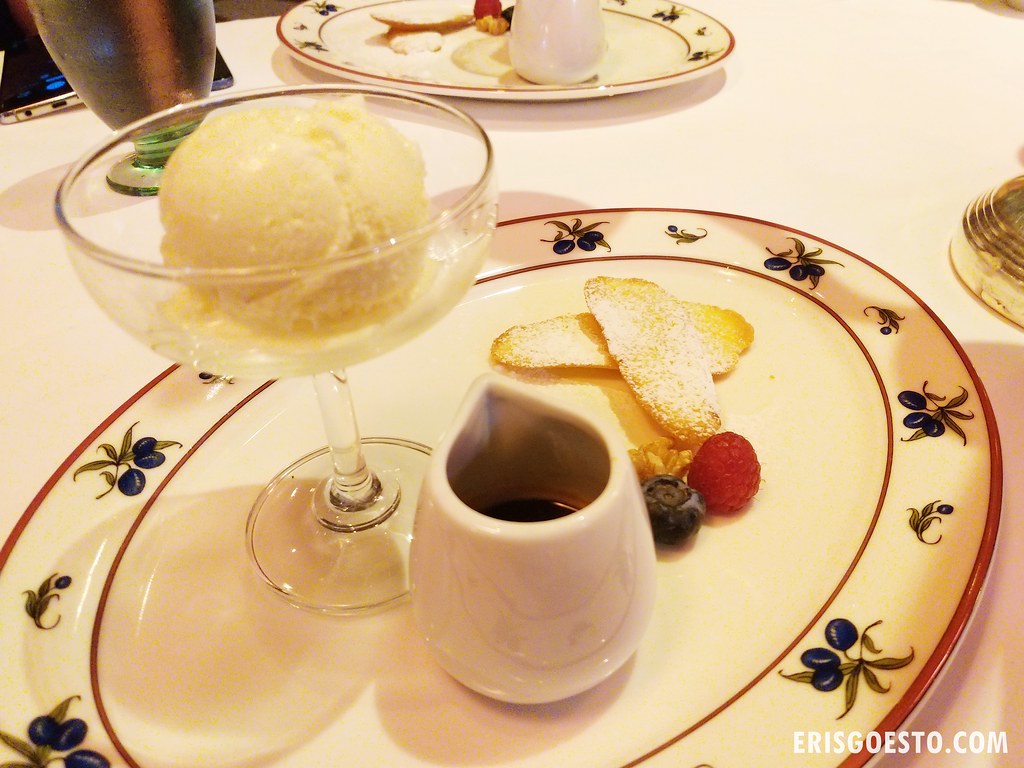 Leave some space for the restaurant’s array of Western-style mousses and creams, flans, tarts, cakes and crumbles, sure to satisfy the sweet tooth. The affogato, served with a shot of espresso and a side of biscuits, was the perfect ending to a satisfying meal.

Open for lunch and dinner Tues – Sat, brunch (11AM – 3PM) and dinner on Sun. Closed on Mondays.

There’s something about a starry night sky that elicits a sense of wonder and awe. Maybe it’s the magnitude of the universe, the glory of its vastness, or the realisation that all our problems, our worries, are as insignificant as a speck of dust in the face of things like infinite time and space.

There aren’t too many spots to go star-gazing in KL, unless you’re willing to hike up a hill before dawn or head to an island where the sky remains unpolluted – but I found an experience close to it recently, at Sheraton Imperial Kuala Lumpur’s Find Your Lucky Star event.

The invite itself was pretty mysterious with little information – perhaps because they wanted to surprise us. And boy, was I surprised. Sitting in the middle of the hotel’s Pavilion M Lounge was a big black box, and as they ushered us in, lo and behold…

A beautiful universe of twinkling stars.

Find Your Lucky Star is a pop-up restaurant available for a limited time only at Sheraton Imperial KL, until December 29, 2017.Bookings for lunch and dinner offer four-course and six-course menus, respectively, and the exclusive experience caters to just 12 guests at any given time.

Designed by famed Singapore-based restaurant and interior designer Emma Maxwell (which we had the chance to meet and dine with – lovely person!), the ethereal space evokes otherworldly vibes with its cosmic light projections and warm, seductive yellow lights. The glass table top, lamps and wine glasses threw further dancing beams across our plates and cutlery.

Emma, the creative force behind Find Your Lucky Star. Her work is sought after by Michelin-starred restaurants all around the world.

The walls seemed to melt away as we settled down for our first course, the air filled with a groovy, chill playlist. It felt like we were floating, suspended in the middle of a galaxy.

Up first: A Ceviche of Yellow Fin Tuna. Topped with a thin, crisp block of seaweed and apple-fennel salad, the meaty tuna was drizzled in a tangy dressing that was light and refreshing – perfect to whet the appetite for heavier dishes to come.

The Lobster Ravioli looked nothing like one: instead of the traditional parcel-like presentation, the version here was a thin, translucent sheet with a generous chunk of lobster underneath. A dash of tropical citrus, guava and lime Sabayon with Nahm Jim married savoury, sweet and tangy in an interesting mix of East-meets-West.

Course 3 consisted of Seared Scampi with Angel-Hair Pasta, but we’ve come to expect a twist from the chef by now, that the dish is not as simple as its title proclaims. Sitting atop the scampi’s butterflied innards, a ball of al-dente pasta, crowned by creamy, umami Hokkaido sea urchin. The whole dish was a beautiful, buttery seafood fest of textures and flavours.

Fish has never been my favourite, but even I couldn’t resist the deliciousness that was the Wild-Caught New Zealand Grouper, resting atop an exquisitely flavourful saffron risotto. Smoked eel broth was poured over just before serving, still warm as we soaked it up with the meat. Filleted to perfection, the flaky fish was sweet and juicy, its flavours intermingling with the richness of saffron. Razor clams added texture, binding the entire dish together.

Finally, my favourite dish of the night: Milk-Fed Veal Tenderloin. Even under the dim lights, the perfection of the slightly pink centre shone through, and slicing through the meat felt like cutting a knife through butter. Complementing the robust flavour and incredible tenderness was a foie gras foam and toasted buckwheat groats. To use the cliche phrase, it was ‘melt-in-the-mouth’ tender.

At this point, the lights and star projections intensified into a burst of shooting stars, signalling the final phases of our dinner. Dessert.

The Warm Pear and Raspberries Bourdaloue was a fitting end to the meal, offering up a velvety scoop of sweet vanilla ice-cream to balance out the sour tang of berries. We wound up the night with some petit fours and coffee, before stumbling out of the box well-fed, all our senses thoroughly satisfied.

Guests can experience this  magical dining experience from now til December 29 at Sheraton Imperial Kuala Lumpur, although the menu will be an Italian affair, as prepared by Chef Gaetano Di Stefano of Villa Danielli. Expect highlights such as baked turbot with braised Mediterranean vegetables, sea urchin foam and tomato vanilla sauce.