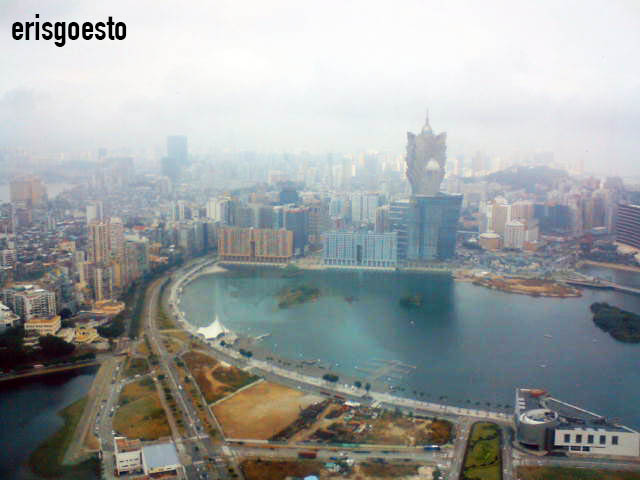 Hi everyone! I’m back from my 3-day holiday in Macau/Hong Kong. Why such a short stay? Coz everyone had to go to school /work (except me lol), and my dad’s boss only paid for 3 days lodging anyway.

The plane tat we were taking would be leaving at 6.15 am, and the required check-in time was 45 minutes before boarding time, but we went early (like, really early – 3am) so we could get the best seats. 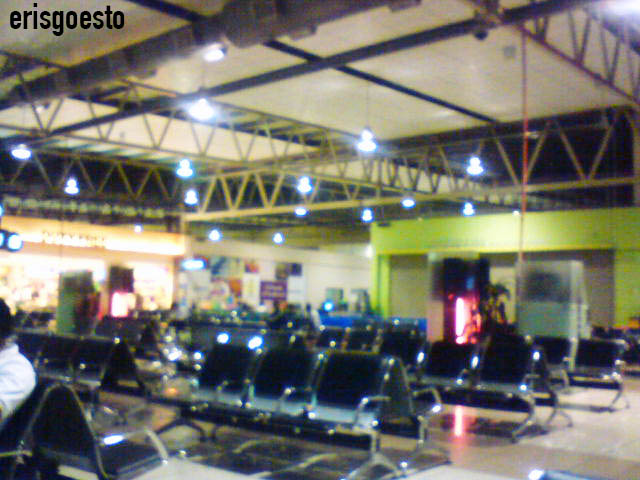 We arrived at the LCCT(Low cost carrier terminal) KL at around 4. This is the departure area where people can wait to board their flights.We weren’t allowed to bring any water or food onto the plane, so we had to wait until we got onto the plane to buy breakfast.

We lined up quite early and were at the front of the line, so we managed to get front seats in the plane. We were taking AirAsia (free seating), so everyone rushed like rugby players to get the best seats. Bro was beside himself with excitement(it’s his first time on a plane) and insisted on sitting next to the window. -.-“
I couldn’t take any pix on the plane coz we aren’t supposed to switch on our electronic devices coz it would interfere with the plane’s navigation system.. but i saw many people switching on their cams to take pix anyway. -__- Hey, you’re putting everyone’s lives at risk here, jerks.

So, no pix on the plane. We arrived at Macau International Airport around four hours later, at 10 am. Had a meagre breakfast of chicken ham and cheese sandwich for a whopping 7 bucks. lol~ damn expensive (and still freaking hungry).

Took a cab to Grandview Hotel (mum said its a four star hotel, but it didn’t seem very nice or grand xD). Since our family of four are all bananas, the cabbie had a hard time understanding us when we told him to go to the particular hotel in English. So we had to go in the airport and ask someone to translate it for us before he understood what we meant.
Note: taxi drivers in Macau are like F1 racers. they even drive faster than my dad! (that’s saying a lot) – They weave through traffic, squeeze through every available space and cranny like nobody’s business. And i thought Malaysian cabbies were reckless! ._.”
Our hotel rooms were pretty basic: 2 single beds, a TV, dresser, bathroom, etc.

After dumping our luggage, we wasted no time in starting our sightseeing. Our first stop was the Ruins of St. Paul in Senado Square. The cab ride was 40++ ! (about RM20) – transportation is very expensive here if you dunno how to take the bus and have nobody to ferry you around.
The weather is similar to Genting Highlands: cold and misty, becoz it’s mid-winter there. We bundled ourselves up in jackets to keep the cold out.
But what freaking rotten luck! It started raining as soon as we got there. There was no shelter whatsoever, so we had to buy a couple of umbrellas from this cunning looking auntie at the roadside who charged us 20MOP each. -.-“

We braved the rain and started our walk around the place.

The shops were all clustered around tiny cramped alleyways. Just like you see in all those Hong Kong movies XD haha!

Eventually the rain cleared up a little and we were able to start enjoying the sights. (Albeit, with soaked socks and shoes)

There is a strong Portuguese element in Macau’s history, and there are many cathedrals and churches to prove that. In Senado Square, you can find many such churches alongside Chinese temples, and modern shops such as McDs, Giordano, etc.

Inside one of the churches. I like the atmosphere of being in one. It gives a sense of peace, quiet and solitude. 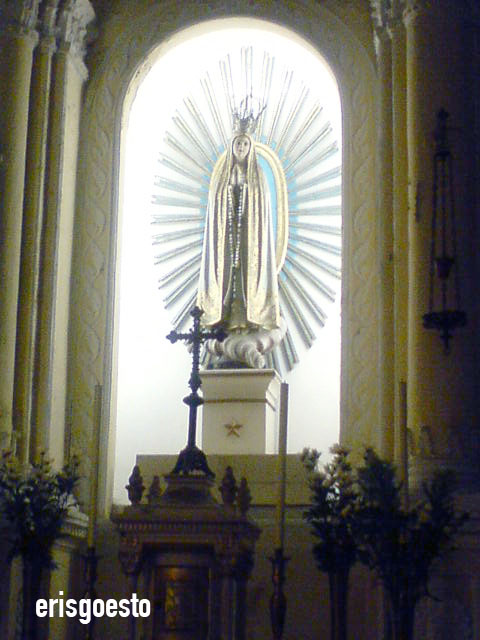 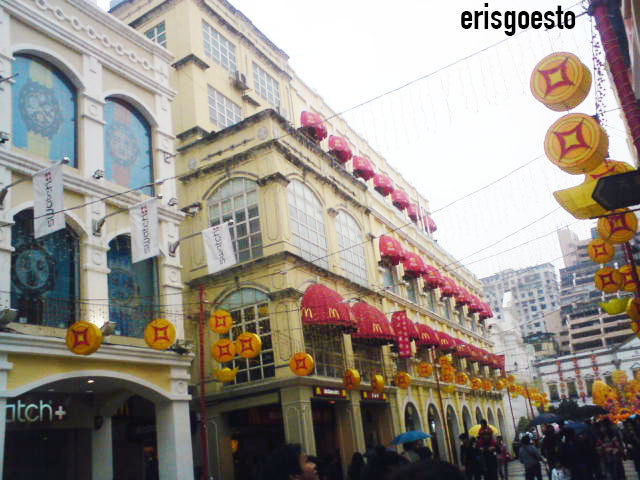 Back outside: It’d be nice to visit the place at night, because then it would be lit by countless colourful lanterns.

After walking around so much and after the tiring flight, we were all feeling ravenous, so we stopped by at a random cafe to have lunch. (I think the cafe was called Macau Recipes). While most cafes in Malaysia are on the ground floor, the ones here are located upstairs. In fact there are a lot of tall buildings here, due to space constraints. virtually everyone lives in an apartment, except the rich people.
The above is mum’s wonton mee soup. I tried a little and it was absolutely delicious! (but its 28 MOP, equivalent to RM14 here… for a bowl of wonton mee….lol)

And of coz, you can’t say you’ve visited Macau without trying its signature ” zhu pa bao” or pork chop bun , which it’s famous for.
Basically a piece of juicy pork chop sandwiched between two pieces of crisp, toasted bread. No sauces, no nothing. A good pork chop bun would be so juicy and tender, it wouldn’t require sauces to complement it.
I dunno if it was the fact that i was nearly starving, but the moment that piece of pork chop bun entered my mouth, I felt light headed. It was piping hot, so I had to chew slowly and carefully, but upon the first bite, I could feel the juices squirting out onto my tongue. It was soft, tender and oh so juicy. I’ve never tasted anything so good in my life! (and I’m not exaggerating here!) the meat was just right and had just the amount of savoury and sweetish flavour to my taste. Gah! I’m hungry just remembering that taste. 😦 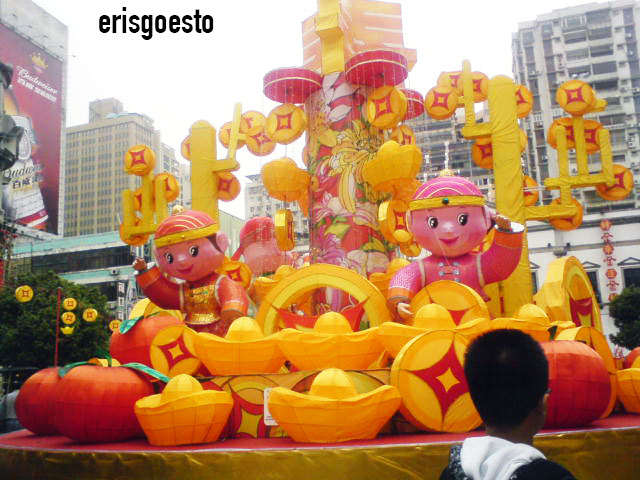 After lunch, we walked around some more. CNY decos can still be seen around the place.
Bro was kinda surprised to see that police regularly patrolled the areas. You can see them everywhere. And there are women police officers. Hot ones at that. And as bro put it, they’re about “half the size of the ones in Malaysia”. lol

Visiting a temple. That’s my dad burning some joss sticks for prayer.
The moment the guy there laid eyes on my family, he asked us, “Not from around here? “
Dad: yeah, how did u know? got face to see one ar?
Guy: haha, no lah, can see by your skin tone ma
Everyone here is very fair and rosy cheeked, and even the dark ones are fairer compared to us.
And boy oh boy, are there many pretty people here. All the guys and gals are so lengzai and leng lui. there was even this guy who looked like a live version of cloud from final fantasy! *faints* 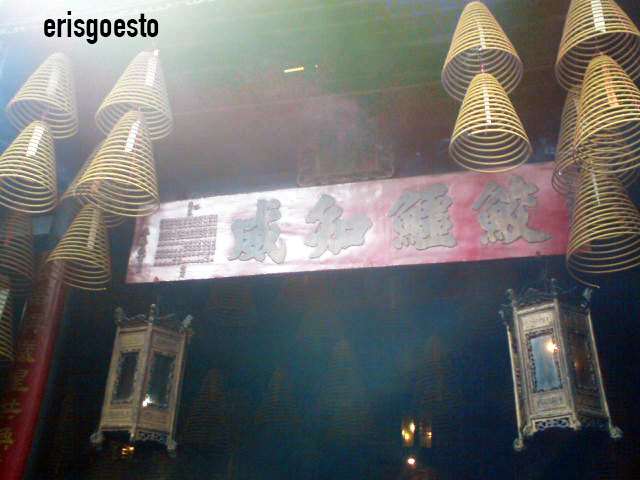 Another church that we visited. 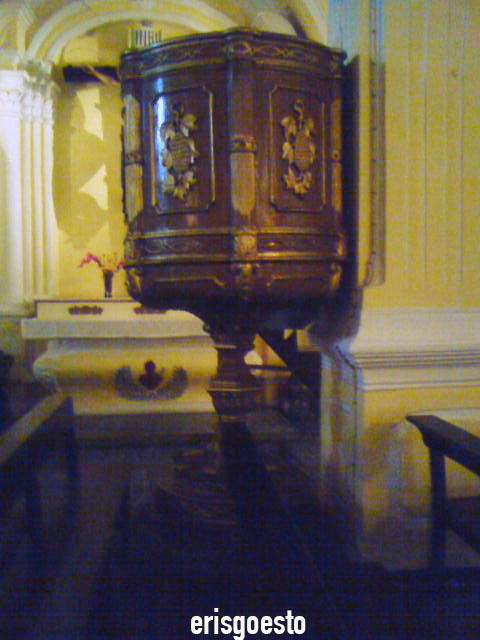 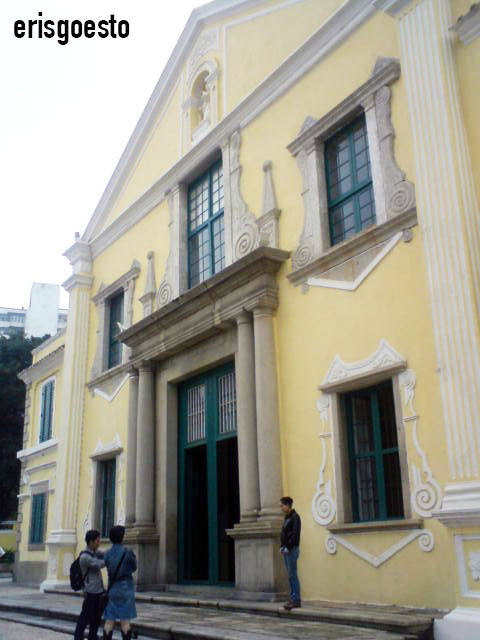 Most of these buildings date back decades and even centuries ago. 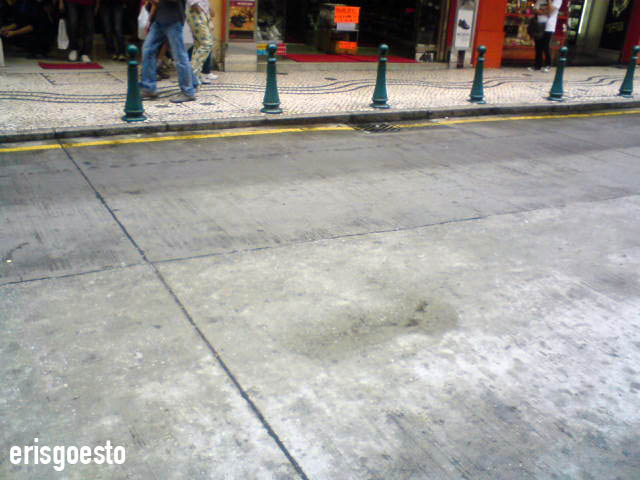 Look at the roads here! Free from even a scrap of rubbish. Coz you’ll be fined if you litter. And it’s not cheap at all. You can be fined for spitting all over the place too. Or if you kick dogs by the roadside.

The place even has their very own street art. (And u dun see DBKL whitewashing the walls here) This is art! 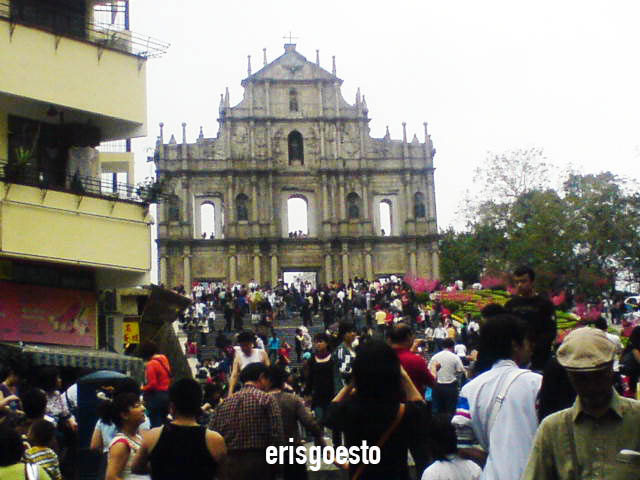 The Square was crowded with people. Probably coz it was Valentine’s.

We went to Macau Tower after that. The weather was very misty, so I couldn’t take a pic of its exterior when we approached the place. Our confident lady cabbie got us to the place in under 5 minutes.

Macau tower is the tallest tower on the island. There is bungee jumping here.  We were all too chicken to try it (I’m too young to die!) At first, mum wanted to try the Skywalk(it’s basically you walking around the top of the tower on an open platform with a safety cord holding you up) but the price was 616 MOP per person (like, RM300 here) so bloody freaking expensive!Was what mum said. so, we just went up to look at the view of the whole city.

View from 59th floor. The glass floor made me feel giddy.

I cant imagine why anyone would want to jump down from the 61st floor with nothing attached to them but a couple of ropes. -.-” (I timed this shot painstakingly, ok!) 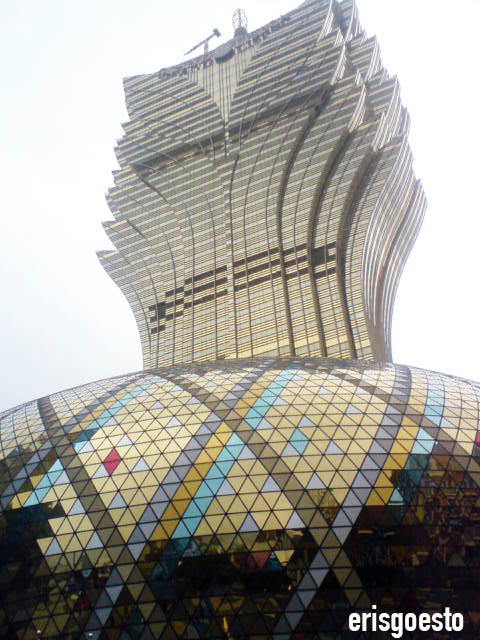 Our next stop was the Grand Lisboa Casino. It’s peculiar design is like a lotus flower, with a round base and ‘petals’ protruding outwards like a blooming flowr. The whole building is done in shiny and reflective gold, and it shone when the sun it its windows. Magnificent.

Rock statues at the entrance

The ceiling – are you gasping in awe yet? XD 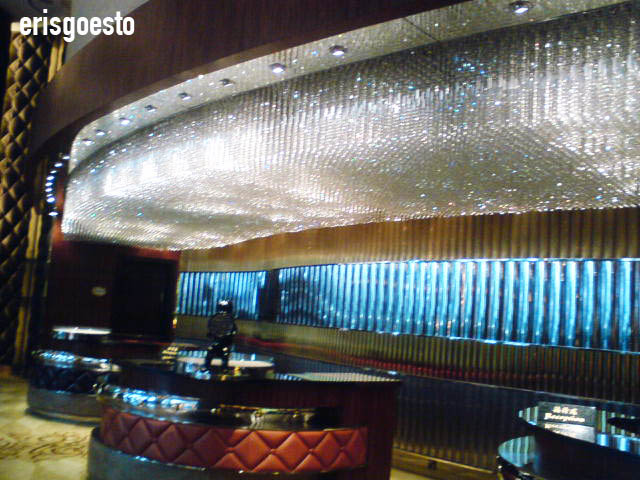 Even the reception is freaking extravagant

There were many beautiful (not to mention expensive) things on display in the main lobby, such as this carving made out of wood. If you look closely you’ll see that they are actually carvings of many little temples, shrines, trees etc.

Monkeys carved out of ivory 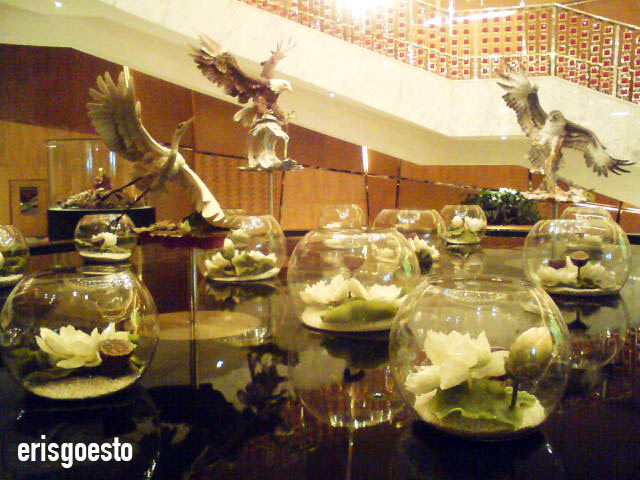 The golden dragon boat on display 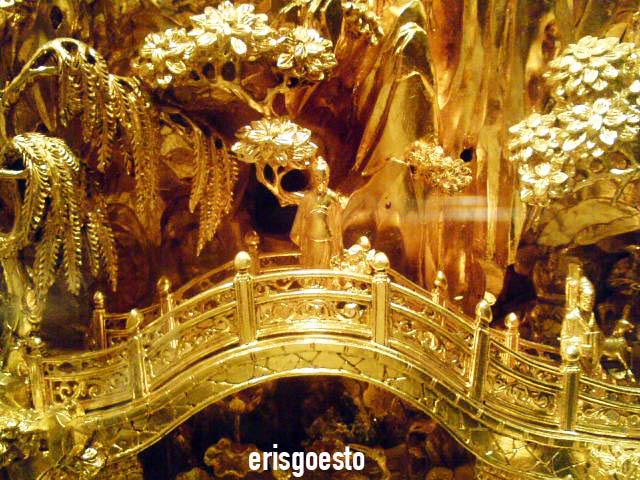 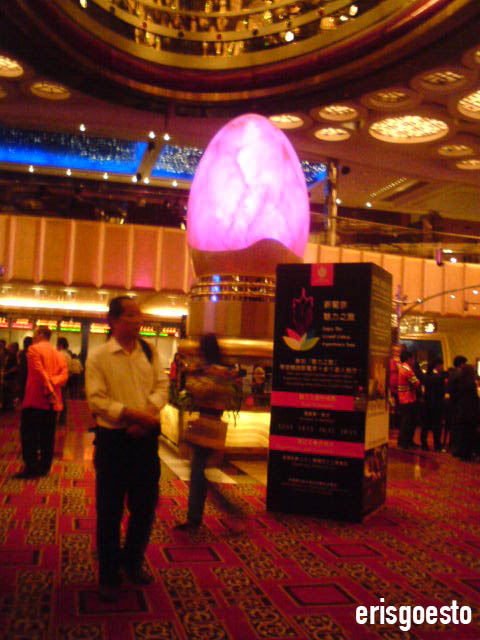 Enter the casino! Funny thing is, they let 18 year olds go in, as opposed to our Genting that requires you to be 21. Not many pix, coz I’m not supposed to, so I’ll just describe it here. The place was quite big, with a dark stage in the middle raised on a platform, and a bar running along the stage at the base. There was a show on at the moment, so we stayed to watch.
It was kinda like, bikini girls dancing on poles. LOL.
The place smelled heavily of smoke. Took me days to wash it out of my hair. It was noisy (of course), there were many Mainland Chinese talking in their heavy accents. There was nobody in jacket and jeans (except me!) so I got out fairly quick.
Casinos = not for me XD 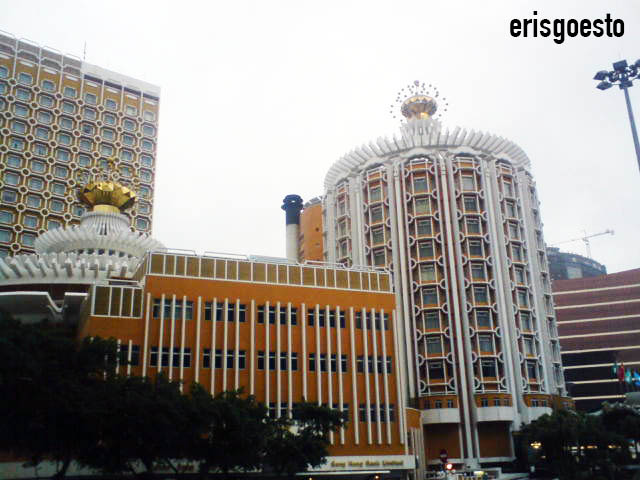 There are a cluster of casinos all around this area. This is the old grand lisboa~ before they opened the new one jus opposite it. Looks normal in the day right? 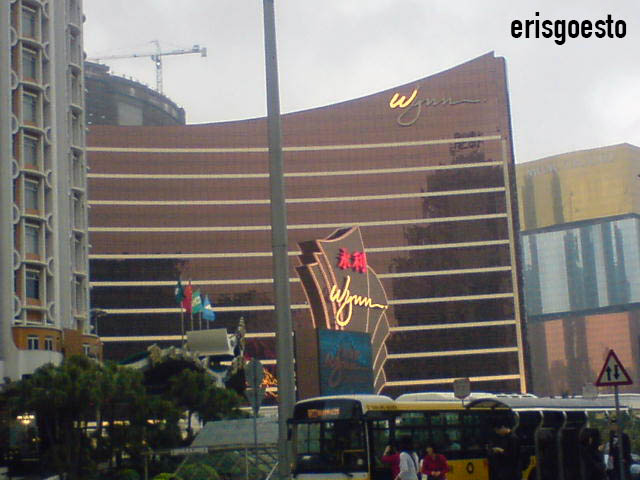 Another famous casino = Wynn, located jus a stones throw away 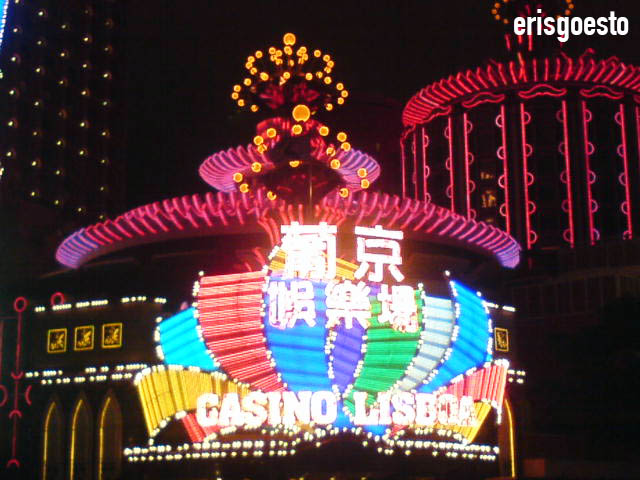 And this is what they look like when it is dark and the fun begins. A dazzlingly bright and colourful display of neon lights everywhere. I guess it’s apt that they call Macau the Las Vegas of Asia.

It gets dark early in Macau. By 7 the sky looks like 8pm. and its freaking cold!
Lots of girls here like to wear boots. I counted about 60 pairs on my first day alone. Is it a trend here? lol. (and of coz, nobody wears slippers in this kind of weather… except me)
Will be posting the second day of my trip next time.
This entry already taken me more than 2 hours uploading and typing all the stuff.
Toodles!