They say that once you know how to balance yourself on a bike, you’ll never forget how to ride it. While that’s partially true, the last time I tried re-riding one after 10+ years almost ended up in me being flattened into a pancake (read  story HERE). I was understandably wary when our guide in Japan, Mariko-San, announced in the car that we’d be heading to a ‘mountain biking’ place next. I mean, it’s already difficult for me to ride on flat ground, and now you want me to bike on a mountain!?

Turns out it was ‘sort of’ flat land after all, and the bikes she was referring to were railroad mountain bikes – basically bikes that have been attached to a railroad track on rollers! 😀

This unique activity in the Hida region of Gifu was the brainchild of illustrious locals, who decided to convert part of the disused 2.9km track (which formerly served the Okuhida-Onsenguchi station in Hida and Inotani Station in Toyama) into a tourist attraction. And so, in 2006, the Rail Mountain Bike Gattan Go (a Japanese term similar to ‘clickety clack’ in English) was born. There are several ‘models’ to choose from, including family-friendly ones that have a carriage at the back for the little ones.

Since we were a group of four, I took the front with Mariko-san, and the two guys followed from the back. A safe distance needs to be kept between the bikes so the instructors let us gain some ground before releasing the next set.

Before we set off, there was a safety briefing and a brochure to read (in simple English, if you can’t understand Japanese). We also had to wear protective safety helmets. Loose items need to be stored as it will be difficult to retrieve if they fall onto the track. You CANNOT jump off or stop during the ride (kind of like the motorised jeeps in Jurassic Park – and we all know what happened when they stopped lol). And… off we went!

The bikes rolled faster than I anticipated! Every now and then there was a loud “CLANK!” as it went over a notch in the railroad track, but the ride was anything but bumpy. If you’re lazy to walk but would still like to enjoy the beautiful mountain scenery of Hida, I 100% recommend riding the Gattan-Go. As the wind rushes through your hair, you’ll see verdant green landscapes on both sides, sometimes passing through high ledges that offer sweeping views of the quaint rural Japanese towns below. A vivid red bridge spanning across a roaring river. I couldn’t stop the bike so I precariously balanced the DSLR on my arm while taking 10x shots hoping one will turn out good lol (don’t try this at home kids). Riding past the backyards of some homes. Some parts of the track passed through tunnels that cut across the mountains. The tunnels were pitch black, and I could hear rushing water in the darkness even over the loud clanks of the bike roller against the rails. We also passed by several disused stations, some of which have small shrines next to them dedicated to local deities. 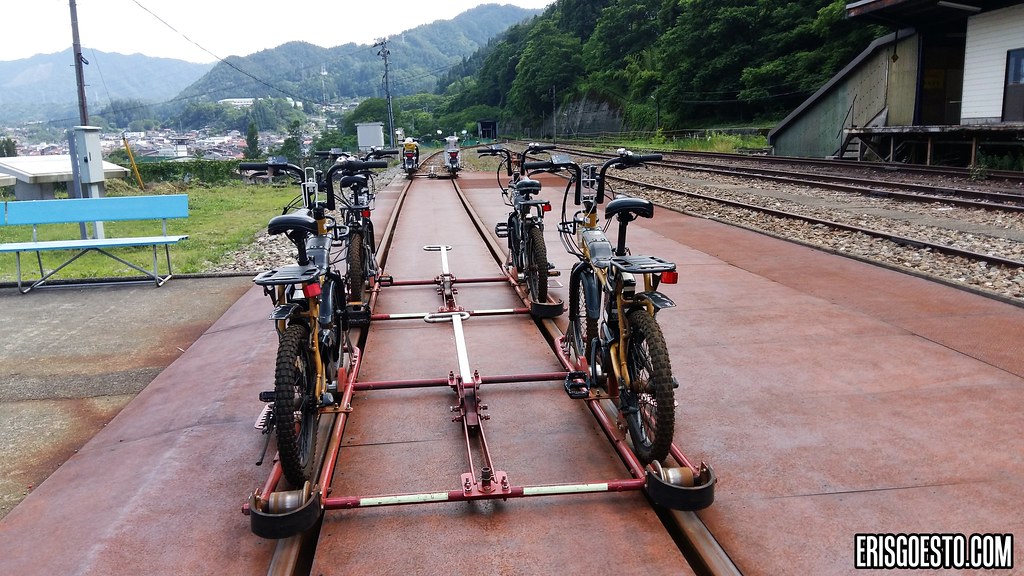 End of the line! We had to stop so that the staff could turn the bike in the other direction. There was a basin nearby which was filled with fresh mountain water. Cool, refreshing and sweet! Heading back to the starting point with more gorgeous scenery.

The entire trip took us about an hour, but it sure didn’t feel like it! 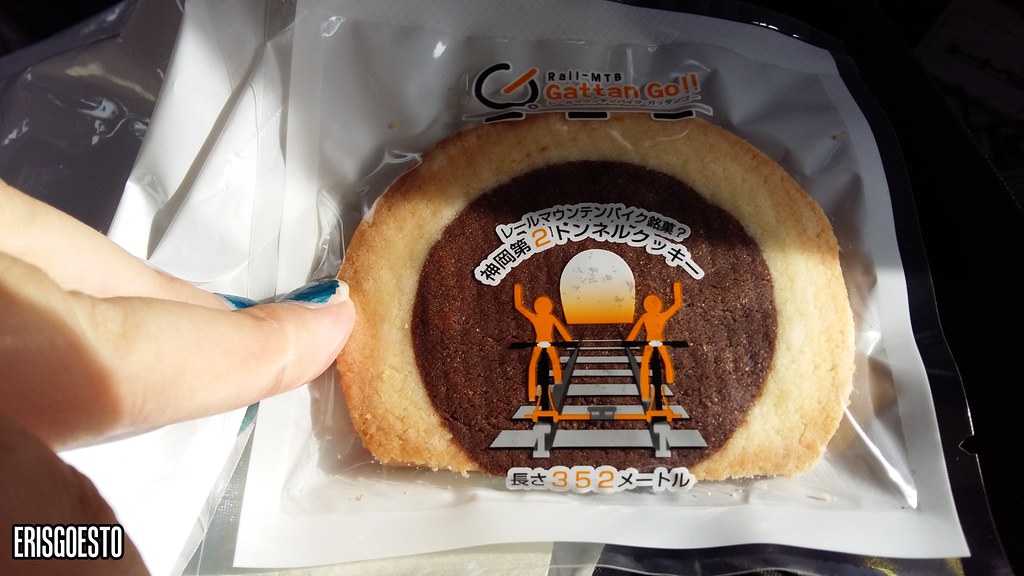 This ‘tunnel’ cookie was almost too cute to eat.

The attraction is accessible via buses and taxi from JR Takayama Station or Okuhida Hot Spring Villages (55-60mins).