I was going through some old posts from my Japan trip last year and realised that I missed out writing on this.

It was our last night in Tokyo, and as appreciation for our work filming from 3AM – 1PM lol (we were doing a story on the Toyosu Fish Market), our POC / guide Ken-san picked out a place for dinner. It turned out to be Saganobori in Ginza, which is very famous for their chanko nabe, aka sumo hotpot. Reservations are required, so we were really grateful to Ken-san for making all the arrangements – we just showed up for the food!

Sumo wrestling is a big sport and an age-old tradition in Japan. If you thought they are just fat dudes wrestling around in a ring, you are sorely mistaken. A lot of hard work and dedication goes into maintaining their physique, and sumo wrestlers adhere to a rigorous diet and training regime, and follow a strict set of rules.

One of the most recognisable dishes associated with sumo wrestling is chanko nabe, which literally translates to “a meal of hotpot”. There are no specific recipes, but typical ingredients include meat or fish/seafood, and vegetables. One thing they all have in common is the large serving, as chanko nabe is eaten as part of a weight gain diet. 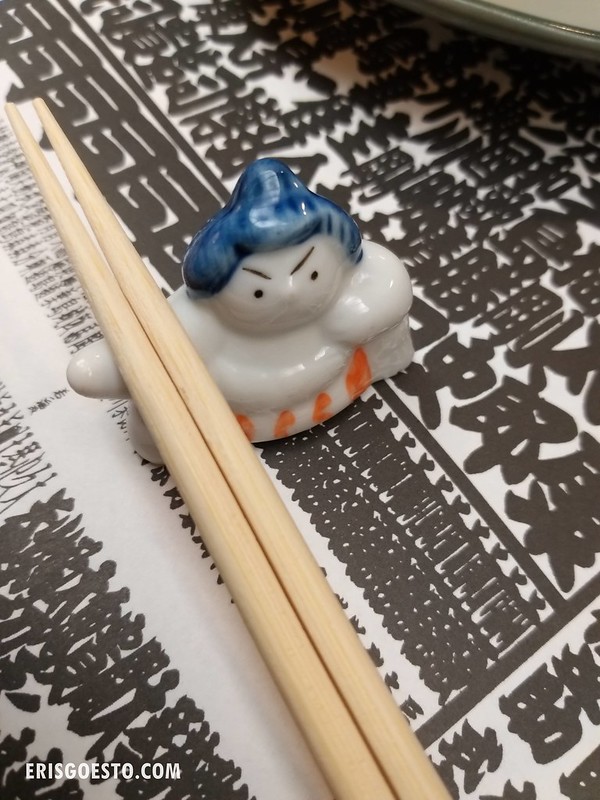 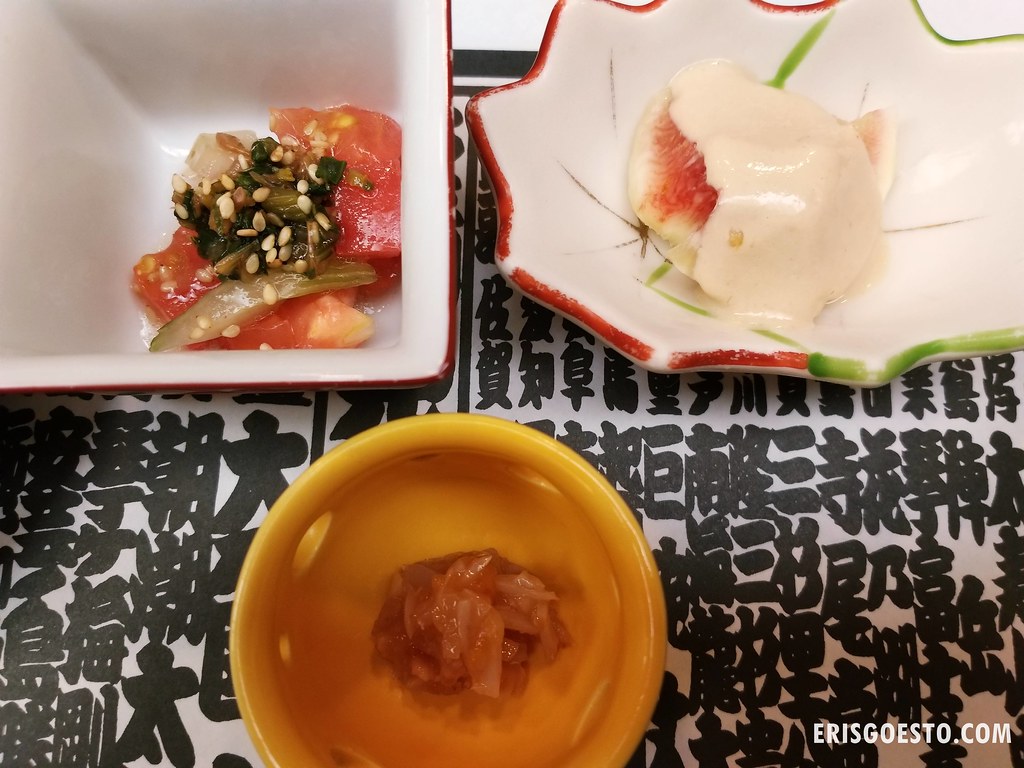 A couple of pickled appetisers to get things started. The fig with cream sauce (top right) was divine. 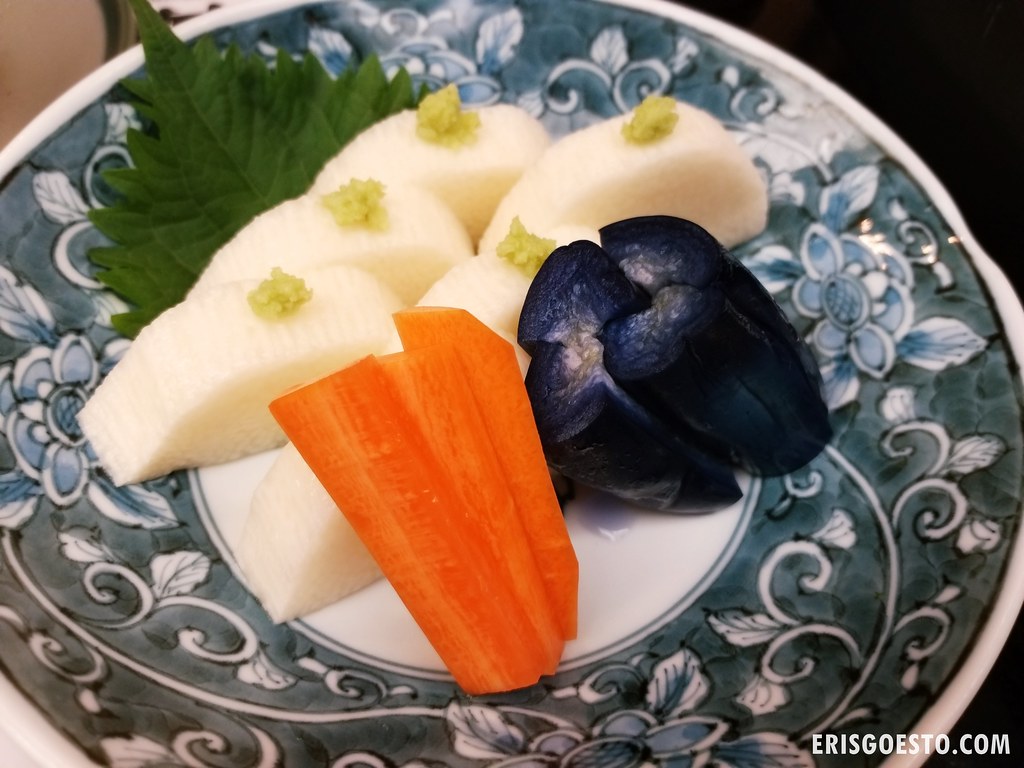 Japanese cuisine is always a feast for the eyes as much as the stomach. 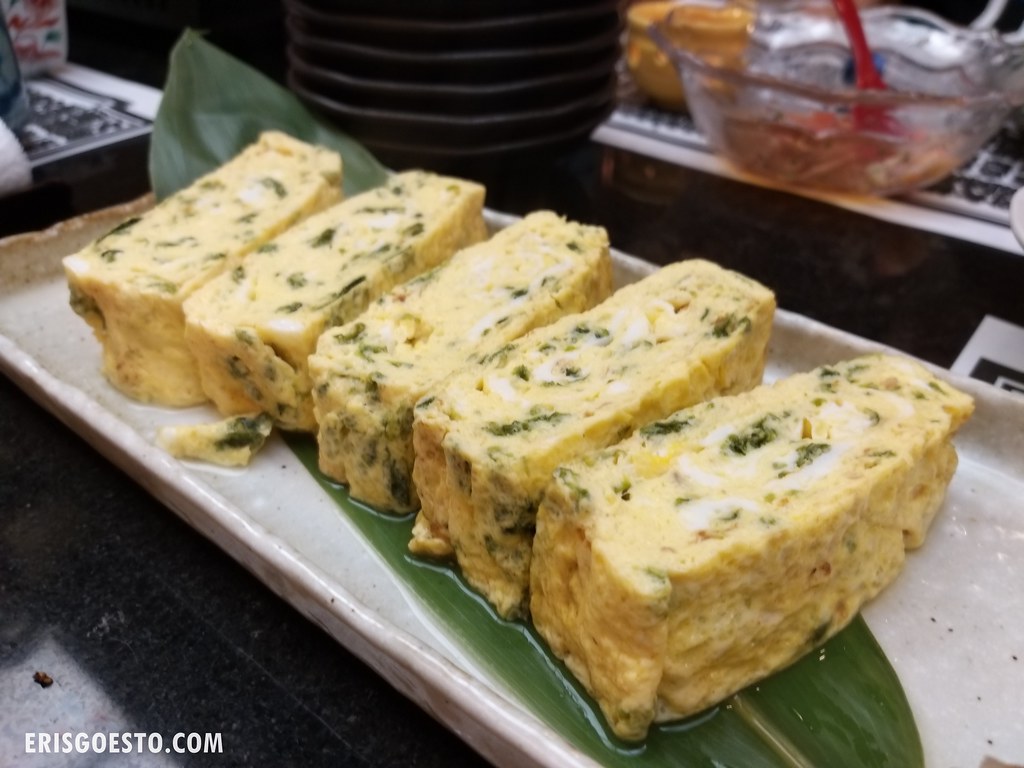 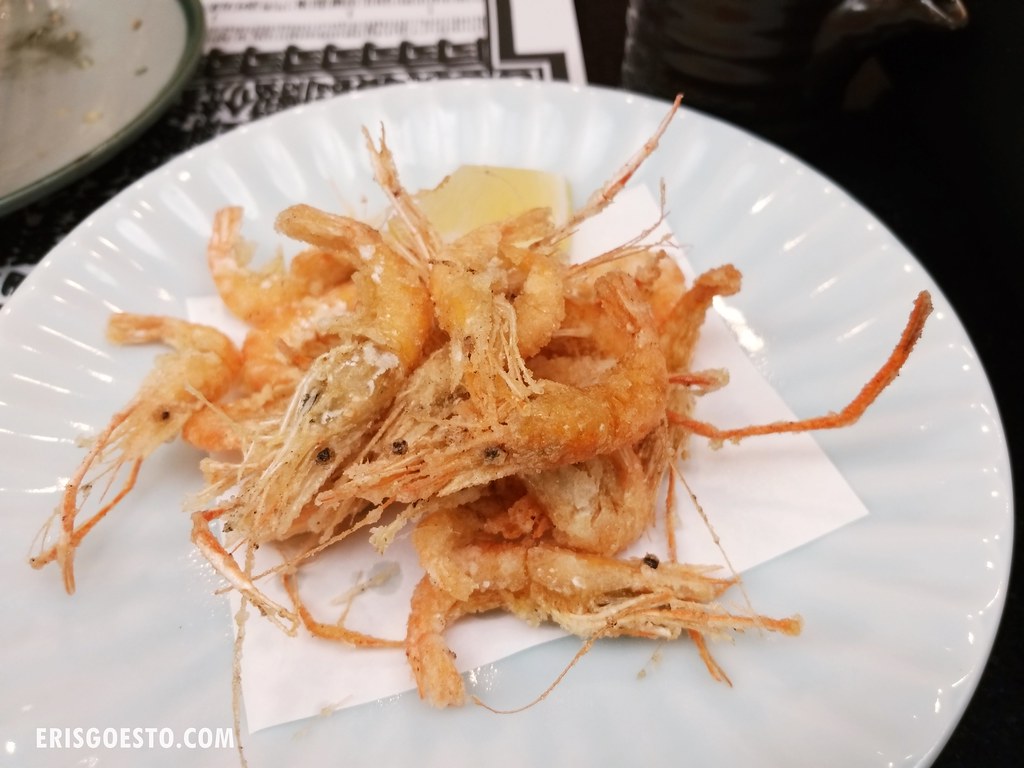 Small fried shrimp – more snacks to keep us going while they prepared the hotpot. 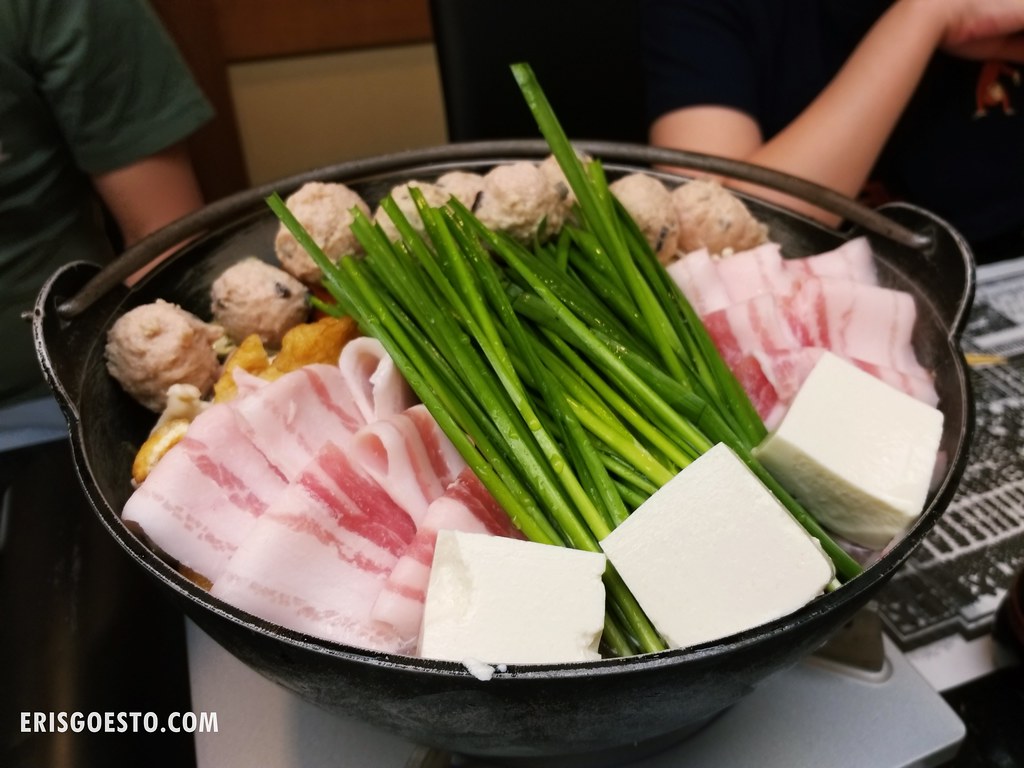 It was the first time I had ever seen such a gigantic hotpot, and it was filled to the brim with beautiful slices of fatty pork belly, humongous squares of tofu, meatballs, mushrooms, vegetables and spring onions in a light dashi broth. This thing could feed a village. Needless to say, we had problems finishing it among the six of us and were basically lying sideways in our chairs by the end of the meal. It was quite wasted, so I don’t recommend getting this unless you’re travelling in a big group or you are a big eater with a bottomless pit for a stomach. 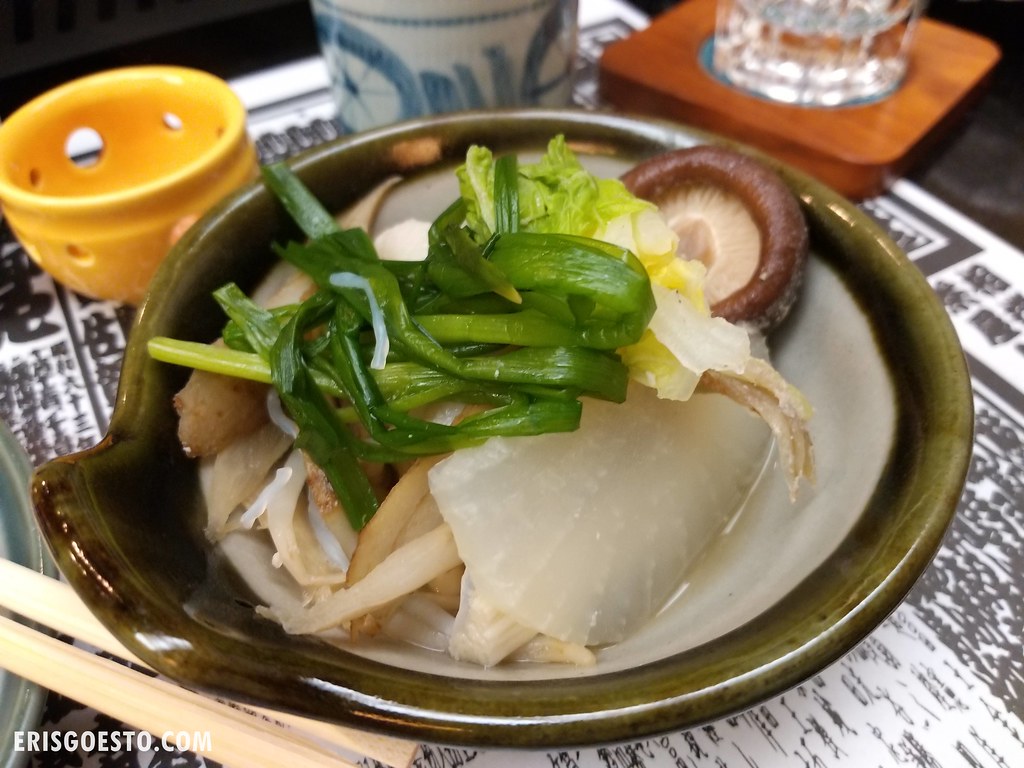 This was like the third bowl and I was already slowing down considerably lol. Of course, everything was fresh and tasty, especially the pork belly slices. The dashi got more and more flavourful as the night wore on, having soaked up the full flavours of the ingredients. 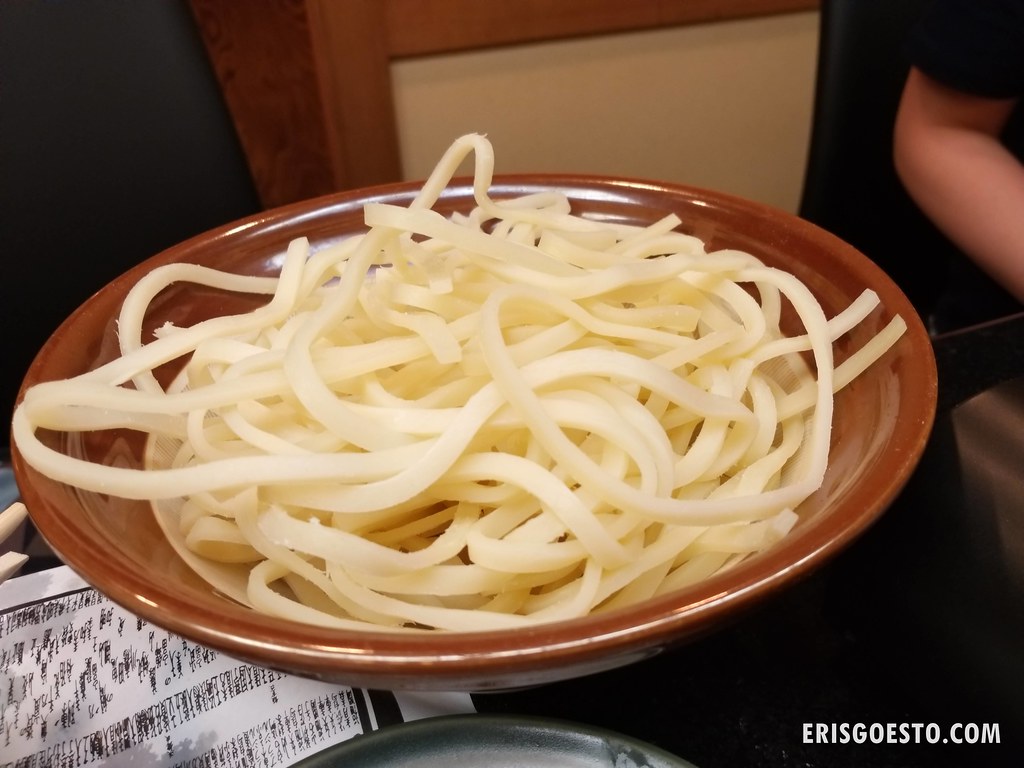 The meat and veggies in itself were already very filling – but of course Ken-san had to go and order noodles lol. I’m not sure what they are but they were a little chewy, like udon, but less thick. 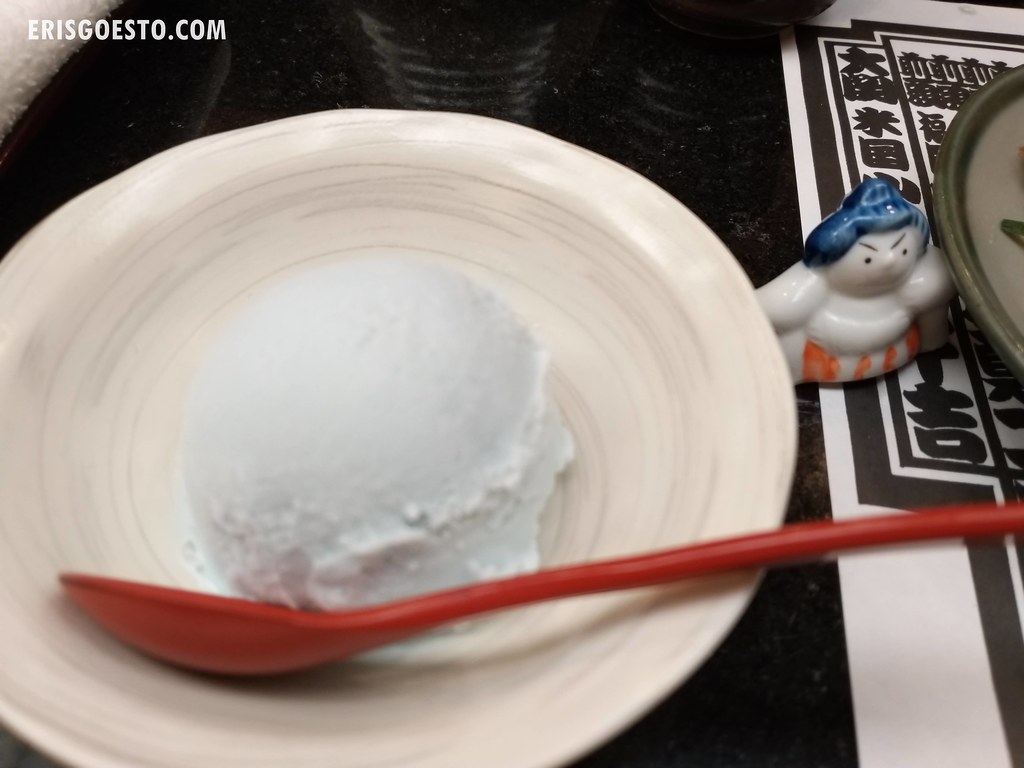 Despite saying we were all full, we somehow found space in our stomach for ice cream (because everyone has a separate dessert stomach, no?). It was an interesting flavour – sea salt – hence the bluish tinge.

We actually sat around eating and drinking green tea (thankfully, I travelled with a group of non-alcoholics!) until closing time. It was actually autumn during our visit and the weather was just starting to get chilly – so it was nice to have something warm and hearty before bedtime.

If you’ve never had sumo hotpot, and are travelling with friends/family in Tokyo, I recommend trying it out at Saganobori. The shop can be a little hard to find because it’s tucked in a quiet side alley (I notice that this is a trend with many famous restos in Tokyo – they often look super unassuming / are hidden in some back alley or other), but with a little determination and a GPS, you’ll be rewarded with a giant bowl of hearty hotpot!

PS: I’m not sure how you can make reservations if you don’t speak Japanese. You may need the assistance of a local.

This was over a month ago but I’ve only had time to write a review now; that’s how busy I’ve been 😦

It’s been awhile since I last met up with my uni-mate Jo, so we decided to get dinner after work. I wanted to take her for some yakitori, but the place was closed so we ended up getting Korean barbecue instead. Located on the second floor of the central courtyard, Sae Ma Eul uses charcoal rather than an electric grill for the meat, creating a nice, smoky flavour.

Interior looks like your typical bbq joint, with indoor and outdoor seating and exhaust hoods over the grills to catch the smoke.

I’ve been to several grill places where the service is excellent – waiters are very attentive to your needs/help you to grill your stuff. This was not one of those places. Service was mediocre, and staff members looked completely disinterested at their jobs. The boss himself was great – came out to show us how to cook the meat properly – but the staff needs proper training and a huge dose of enthusiasm.

Jo and I got a set meal for 2-3pax (ambitious much). Instantly regretted when the food came because they came in such hefty portions. Giant pork belly slabs. Humongous shoulder cuts. A huge mound of marinated octopus. Didn’t help that I (foolishly, but hey, everyone does that when they’re hungry right?) ordered an extra helping of cheese lol.

High quality cuts with good marbling and balance between lean and fat.

Jo didn’t like octopi so I had this all to myself 😀 They were quite sizable, and the spicy sauce it was marinated in had a kimchi/bellpepper flavour.

Part of the fun of bbq – watching the meat crack and sizzle over the fire.

Our melted pot of cheese on the side was thick and gooey – great as a dipping sauce with the meat. The meat itself was tasteless but went well with some sesame oil and bean paste. The best way to eat is to wrap the whole chunk in a fresh lettuce leaf with some garlic. Hmm!

A lot of food which we struggled to finish towards the end. Didn’t even touch the banchan (side dishes) too much lol.

All in all, I’d say that I’ve had better K-BBQ, but Sae Ma Eul isn’t bad and pretty value for money if you’re sharing a set with friends. Service can definitely be improved though. They also have branches in Publika and Solaris Mont Kiara.

I woke up feeling like death warmed over this morning. I don’t know if it’s because I slept late last night, or my body just decided to tell me that it was growing old, but I had a massive, throbbing headache. The initial plan was to just lie in and let it subside, but at the mention of roast pork my ears perked up and I managed to drag myself out of bed to join my family for lunch. In my books, one must either be chronically ill or dying to ever say no to a nice slab of charsiew or crispy siew yuk.

It was a relatively long drive (about 45mins) to Restoran Char Siew Yoong in the city center. Tucked in a quiet alley along Old Pudu, Cheras, visitors will be greeted by rows and rows of glistening roast pork bellies hanging in the front, where the chefs chop and butcher up pieces of meat to be served to patrons on the inside.

First up, we ordered two double-boiled soups – black bean and lou wong gua (old cucumber soup). Double boiling is a Chinese cooking method where the soups are placed in a jar and the jar is then boiled inside a bigger pot. This technique seals in all the flavours, making it rich and hearty.

Time to try out the star attraction – charsiew! This roast meat is very popular all around the world where there are Chinese communities, and can either be either with rice, noodles or stuffed into buns. The meat is seasoned with honey, five-spice powder, fermented bean curd, dark soy sauce and a mix of other ingredients before roasting over with maltose for a sweet, caramel-ly taste.

The version here lived up to its reputation on many online blogs and some newspapers – sweet and glazed, with a melt-in-the-mouth texture. Definitely one of the best charsiews that I’ve ever tasted and highly recommended! Instead of drowning it in sauce, the folks at Char Siew Yoong let the meat do the talking: but if you want more sauce, you can always request it from the staff and they’ll gladly provide you with a bowl of sweetish glaze.

We also had their siew yuk, which is also roast pork belly but with a dryer texture and crackly skin. Just looking at the beautiful layers of fat and lean meat is enough to make any pork lover drool. The skin was very crispy and crunched loudly when eaten, while the pink, lean part was salty goodness. It could have done with more flavour though, but overall, still a very good siew yuk.

Char Siew Yoong is easily one of the best places for roast pork in KL, as far as my knowledge goes, but feel free to recommend me other places to try! 🙂

Opening hours: 10am – 5pm, closed once a fortnight on Thursdays