In a city of asphalt, concrete and steel, it’s always nice to have a green respite.

Lucky for us in the Klang Valley and Kuala Lumpur, we have a number of nice parks to exercise in – like the Bukit Jalil Recreational Park. Located some 20km from the city centre, the 80-hectare park is nicely landscaped, with jogging paths, equipment for exercising, picnic spots and ponds filled with catfish amidst lush greenery. If you’re lucky, you might even run into the small local wildlife, such as monkeys, cranes and monitor lizards!

The Boy and I had been eating like pigs since he arrived in Malaysia, so I thought it would be a good idea to go for a walk at the park one weekend. It was a long holiday so the place was less crowded. The park is huge so there are three different entrances – we parked at the one near the Cavalry Church and Convention Centre. 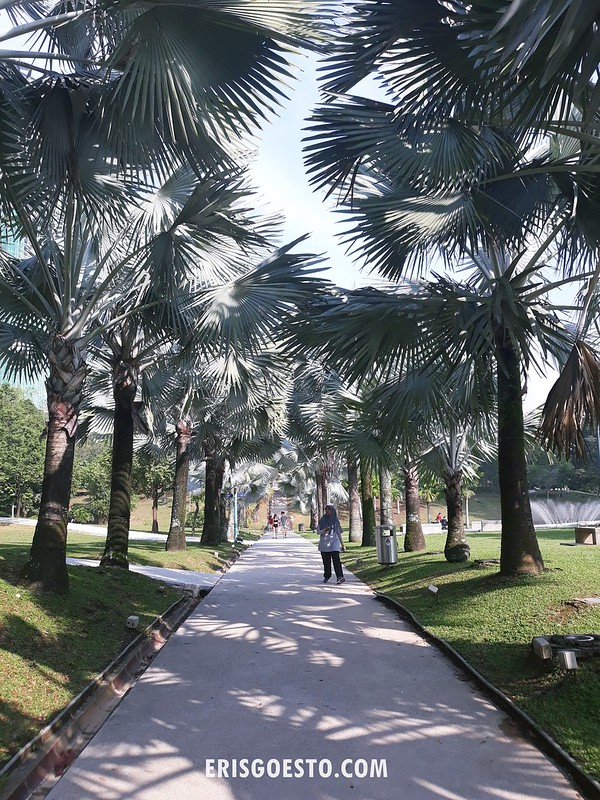 There hasn’t been anything new added, although the facilities are still pretty well maintained. Note to first timers – the park is huge and will give you a good work out! Just going up and down the slopes to explore different sections is better than any treadmill lol. 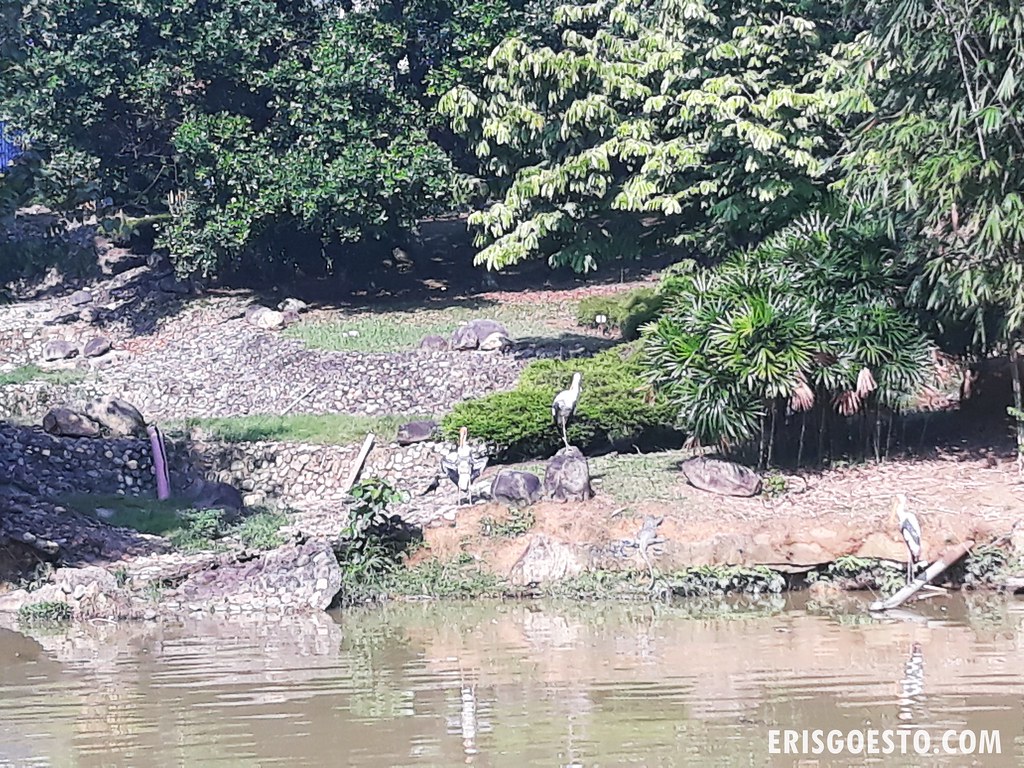 Pond with some cranes chillin’. The pond is also stocked with catfish, which you can feed with scraps of bread and watch them swarm in a slippery mass ew 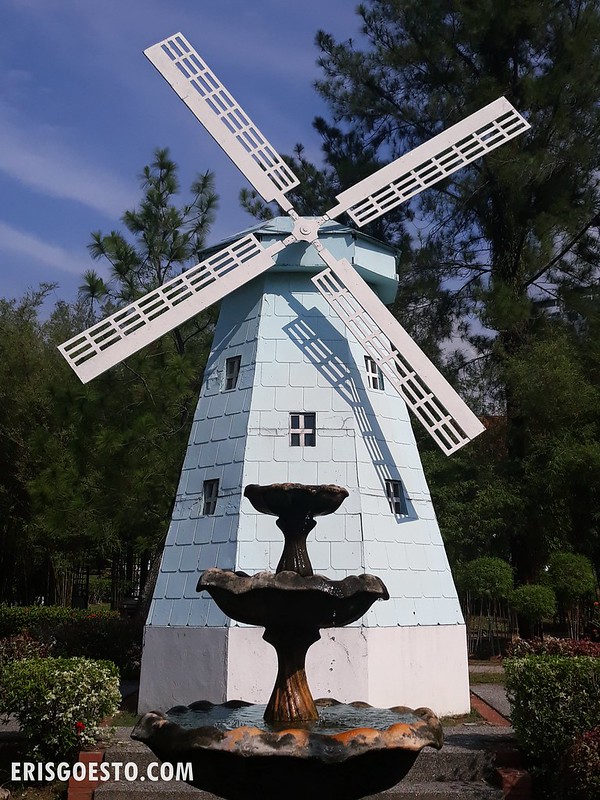 Not to be missed is the Wonders Of The World section, which features mini structures built to look like different parts of the world, such as Holland, UK, Thailand, Iran, China and Japan, to name a few. 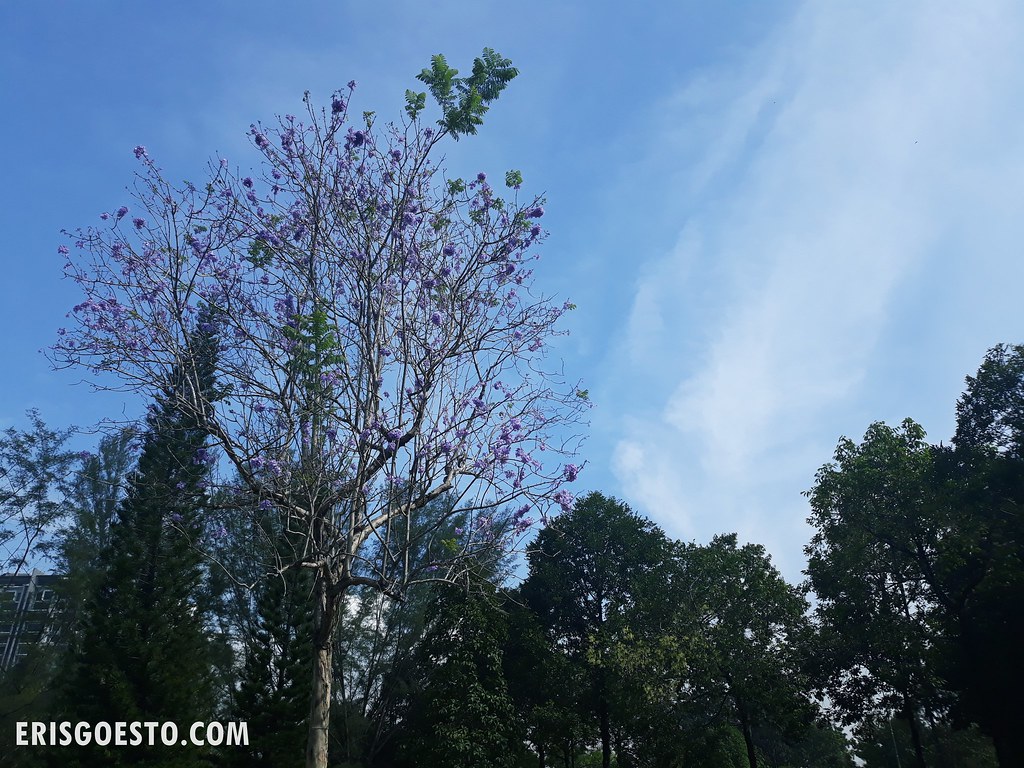 By mid-morning the weather was getting warm so we started our walk back to the car. 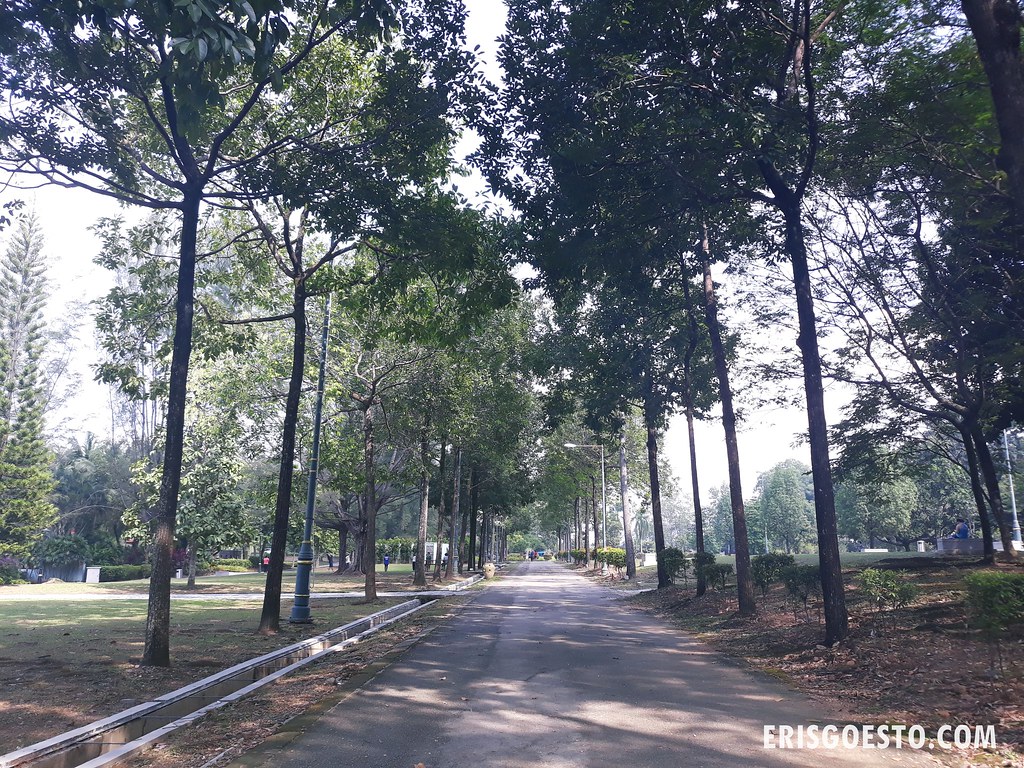 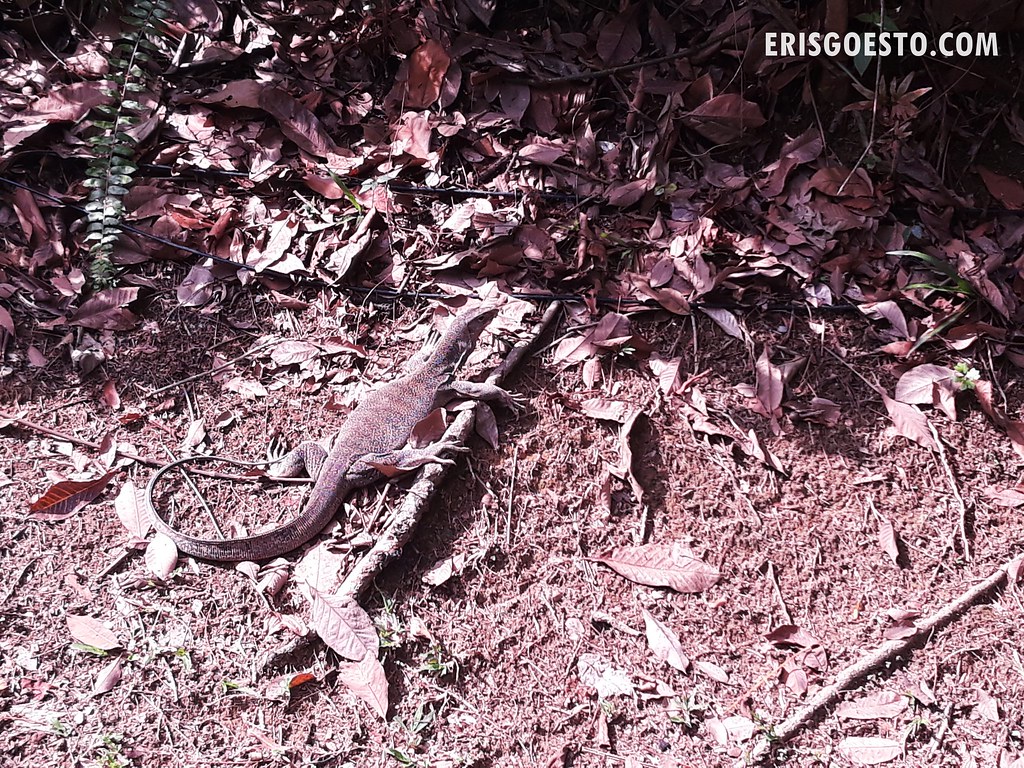 Saw some macaques on the bridge while on our way out. Visitors were feeding them, but I wouldn’t recommend this because monkeys are known to be aggressive when they get used to it (Batu Caves is a good example). Also this huge monitor lizard that I almost missed because it was camouflaging well against the dried leaves and branches.

It’s nice that we have such parks to visit and work out in, and it’s free to boot. I should probably come more often 😛 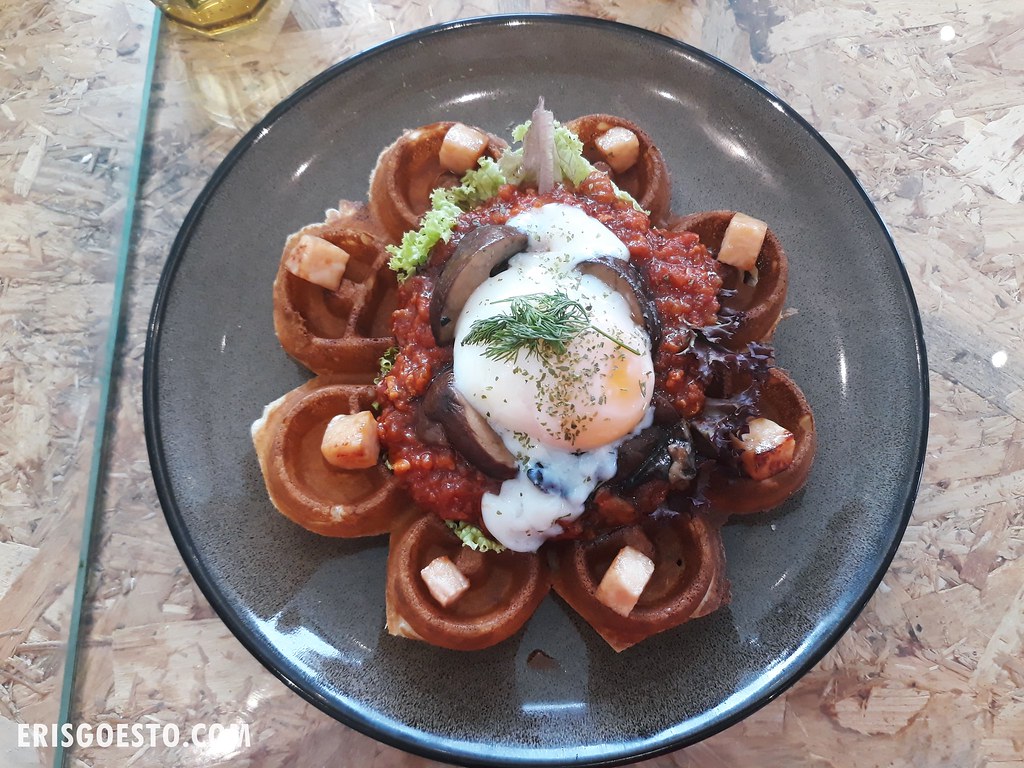 Regained all the calories we burnt by stuffing our faces at the nearby New Chapter by Owl’s Cafe (previous review here). 😀

Indonesia is one of the world’s most populous Muslim countries: so I expected restaurants to be closed throughout the day during fasting month. Surprisingly, in the city of Bandung, many places remained open and people were cool about eating…as long as it wasn’t in ‘public’. The wooden roadside stalls had ‘curtains’ where people could eat away from prying eyes.

We were running a little late, so by the time we left Lembang Begonia Flower Garden, the roads were clogged with people getting food to break fast. We inched slowly through traffic, and I took in the sights. There was smoke rising from meats being grilled in the open, accompanied by colorful displays of dessert and loads of yummy snacks. Pretty reminiscent of the Ramadan bazaars we have in Malaysia.

The sun was setting by the time we got to Lembang Floating Market. Unlike some of the authentic floating markets of Thailand, this was built as a tourist attraction, with a spacious park and various entertainment outlets within. We wasted no time in exploring the place, which had a big lake in the middle where visitors can rent boats.

Geese roaming around a pond. They were scary af and acted like guard dogs: fiercely territorial, and prone to chasing you around until they take a good chunk out out of your butt.

Park was well maintained and clean, with spots like this wooden bridge where visitors can take pretty pictures.

The kids will love the bunny park! Too bad they were closing for the evening. We saw some fat and fluffy specimens bouncing around.

A cultural village, where there were traditional wooden huts and gazebos, as well as a paddy field.

After a long walk, we finally got to the ‘Floating Market’. What it is, essentially, is a row of ‘boats’ on water where peddlers sell snacks, food and drinks. You have to buy ‘coins’ in order to purchase anything, kind of like at an arcade.

There were a lot of interesting snacks, but we were going to have dinner soon so we didn’t get any.

The Lembang Floating Market and Park is a nice place for a relaxing getaway from the city, so hop on over if you’re ever in the Lembang district near Bandung.

One of the places I visited with E during my trip to Manila was the Quezon Memorial Circle in Quezon City, Manila. We took a jeepney and got off opposite the circle/park, but couldn’t find a way to cross the road. We ended up circling around half of the park for a good 10mins, before realising that the underpass was where the jeepney dropped us off lol.

First time riding a jeepney in the front passenger seat!

The underpass to cross the highway is at the entrance to Quezon City Hall. The short, brightly lit walkway was lined with tourist information boards detailing the best places for entertainment and food in QC and beyond.

Quezon Memorial Circle and its surrounding park was named after Manuel L.Quezon, the 2nd President of the Philippines who held a nine-year tenure from 1935-1944. The place was originally intended to be the seat of the Philippine government and plans were underway to build a Capitol building before it was interrupted by World War II. Today, it is a green park with many family-oriented attractions such as a museum, playground, biking trail, and a small theme park.

We entered through an avenue lined with flags from all over the world. It was cool and breezy under the trees.

Some beauty queens were practicing their modeling and catwalk skills. An interesting article here on the beauty pageant industry in the Philippines.

The main area of the Circle was huge and filled with people even on a weekday morning. Joggers, children on trikes, people walking dogs (a rare sight in Malaysian public parks due to religious sensitivities), college students practicing their dance or singing performances, MMA fighters doing training… a perfect place to sit and people watch.

Towering over everything else, the main fixture at the Circle is the Quezon Memorial Shrine. It stands at 66ms tall, representing the death age of President Manuel Quezon. The sleek triangular structure, which is shaped like a three-pronged crown is topped by female angels holding the sampaguita (the national flower) wreaths – each dressed in a regional traditional costume to represent regions in the Phils, namely Luzon, Visayas and Mindanao.

At the base of the structure is a museum dedicated to who else – Manuel L.Quezon. Entry is free but visitors can give a donation for its upkeep. Inside chronicles the history of Philippine independence, besides housing various historical artifacts and an insight into the life of the man himself. (Above) How the quarters of the first lady, Aurora Quezon, looked like.

Quezon’s remains were re-interred here in 1979, and his wife’s at a later date. The huge dark tomb sits on a raised platform in the middle of a circular chamber which allows natural sunlight to filter in, lighting the tomb up like a halo.

During his time, Quezon made many reforms, including establishing a more uniform national language (Tagalog), education, agricultural, government and social sectors, as well as trade. In fact, the Phils enjoyed the best economy and trade it had seen since 1929, in Quezon’s time. This was brought to a halt when the Japanese invaded Manila in the 1940s. Quezon eventually died in exile in New York from tuberculosis at the age of 66.

Outside the museum, the circle’s base had engravings that depicted important points of Filipino history.

Cookies and cream – cold, milky and creamy. What more can one ask for on a hot day?

Exploring more of the park. We stopped by at the Circle of Joy, a children’s playground complete with bicycle trail. Visitors can rent bikes, tricycles and tandem bikes for a fee.

Had kebab and kalamares (only 5pesos each, that’s dirt cheap).

A theme park area aptly named Circle of Fun, but it was closed during the day.

Quezon Memorial Circle and its park is a good place for families and tourists as there are lots of things to see and do. It’s not the best kept (there were still patches of garbage around) but it’s clean enough and some spots are quiet and nice to get away from the hustle and bustle of the city.