Mother Nature can be both a beautiful and terrible thing – as we witnessed during a recent trip to Mount Merapi, on the borders of Central Java and Yogyakarta in Indonesia. Towering at over 2,930 metres above sea level, it is the most active volcano in Indonesia, and has erupted consistently every few years since the 1500s.

Like most mountains and volcanoes, Merapi is shrouded in legends and mystery, and plays a big part in Javanese mythology. The name is believed to be derived from Javanese Meru – after the mythical mountain of gods in Hinduism, and Api (fire). It holds special significance in the Yogyakartan royal family, with the belief being that there is a spirit world within the mountain ruled by spirit rulers, with a setup that is a direct reflection of the (mortal) royal court.

The volcano, in fact, lies along an axis that runs through Yogyakarta city via the Kraton (sultan’s palace) until it reaches the Southern Ocean. It is therefore seen as sacred, with the spirits of the mountain at Merapi, the Sultan of Yogyakarta as the ruler of the Javanese kingdom, and Nyi Roro Kidul (a sea goddess/deity) as the queen of the Southern Ocean. 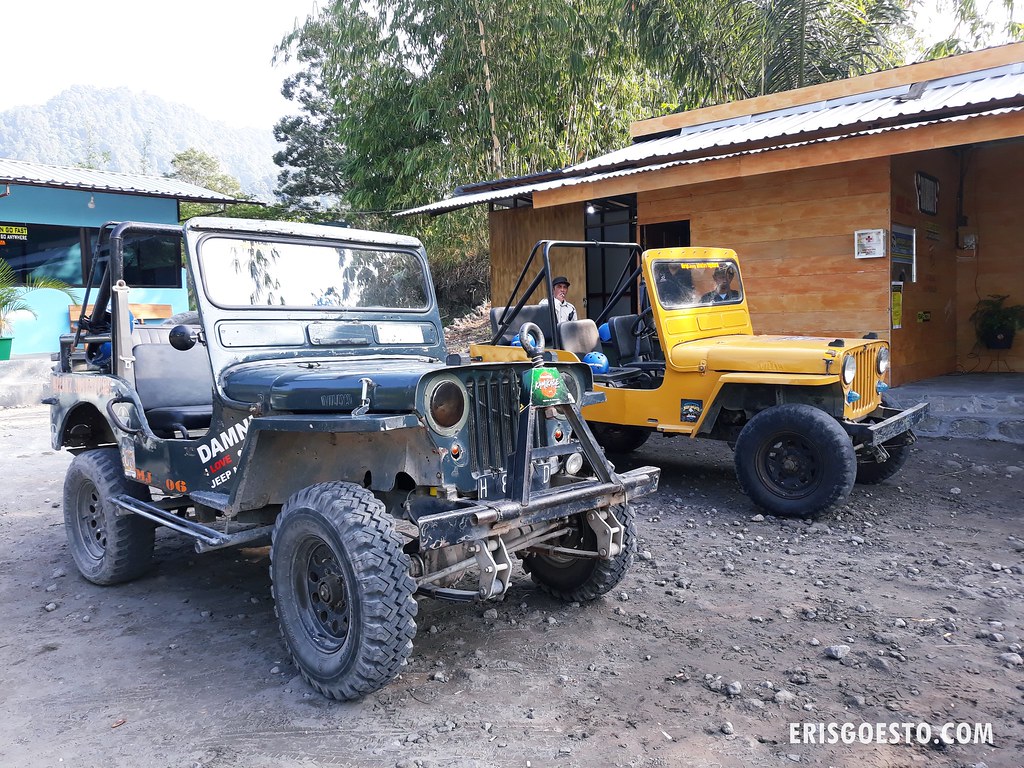 Despite the volcano’s active status, there are many villages scattered on the slopes of the mountain, with settlements as high up as 1,700 metres. Agriculture is a mainstay owing to the rich volcanic soil, but other prominent industries include tourism and the mining of volcanic rocks.

The Merapi Lava Jeep Tour offers visitors an insight into life on Merapi’s slopes. There are several routes to choose from, lasting from an hour to three or more. Tours are conducted on an open top jeep. During our visit, we were a little pressed for time so we opted for the shortest (90 minutes). Before setting off, your driver will hand out masks to protect from the dust and ash along the route. Roads are not paved so expect a bumpy ride! 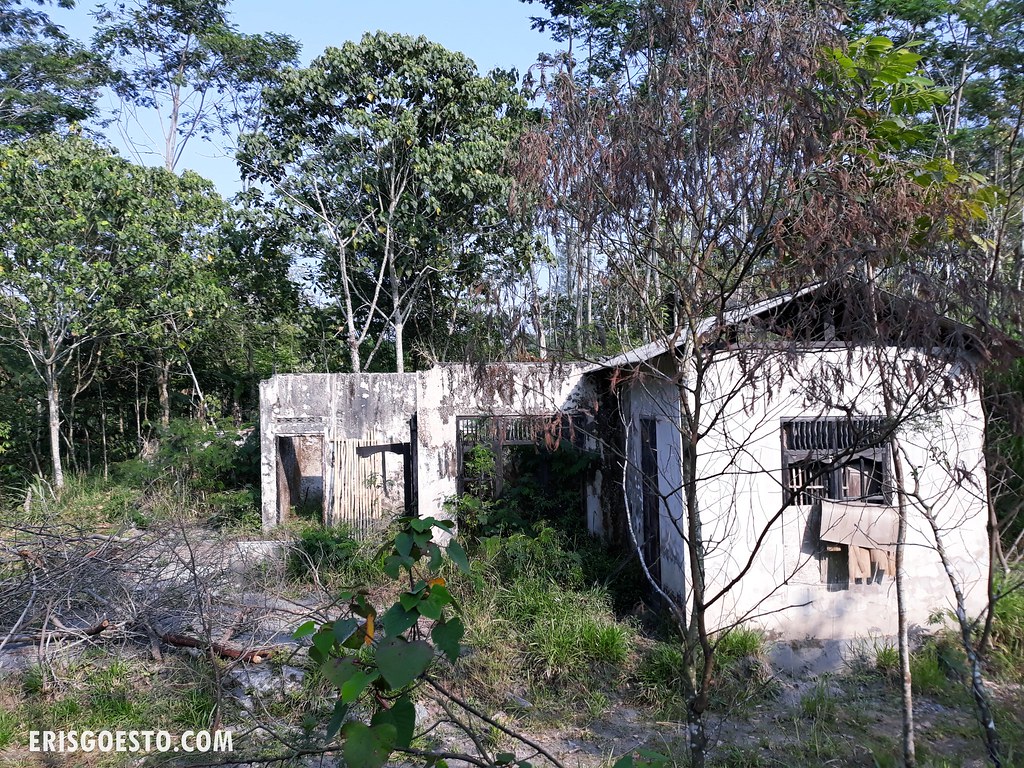 The last major eruption on Mount Merapi was in 2010, which claimed hundreds of lives. As we headed to our first stop, our guide pointed out homes that were destroyed and had been left abandoned, reclaimed by nature. It was haunting, and eerie, to say the least. 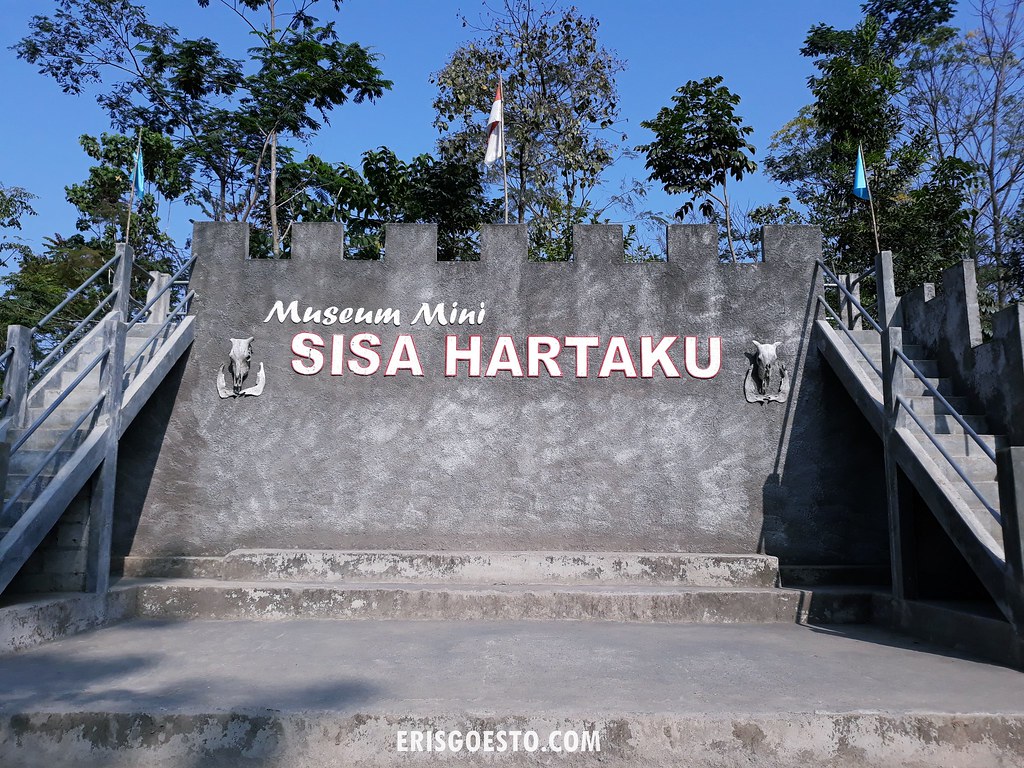 The Sisa Hartaku Mini Museum (literally “the remains of my belongings”) has exhibits detailing the destructive power of the volcano. Formerly a home, it was destroyed during the 2010 eruption, and the owner, Riyanto (who managed to escape with his family) , decided to convert the place into a museum. 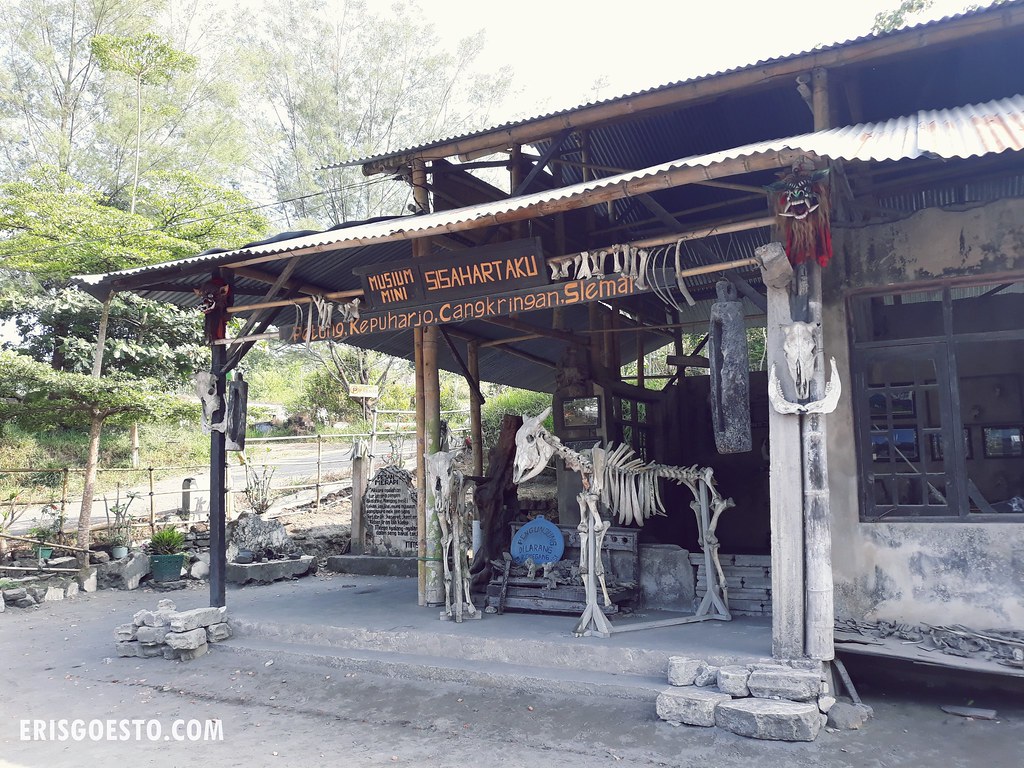 The rather macabre exterior features skulls of livestock that were killed during the eruption. 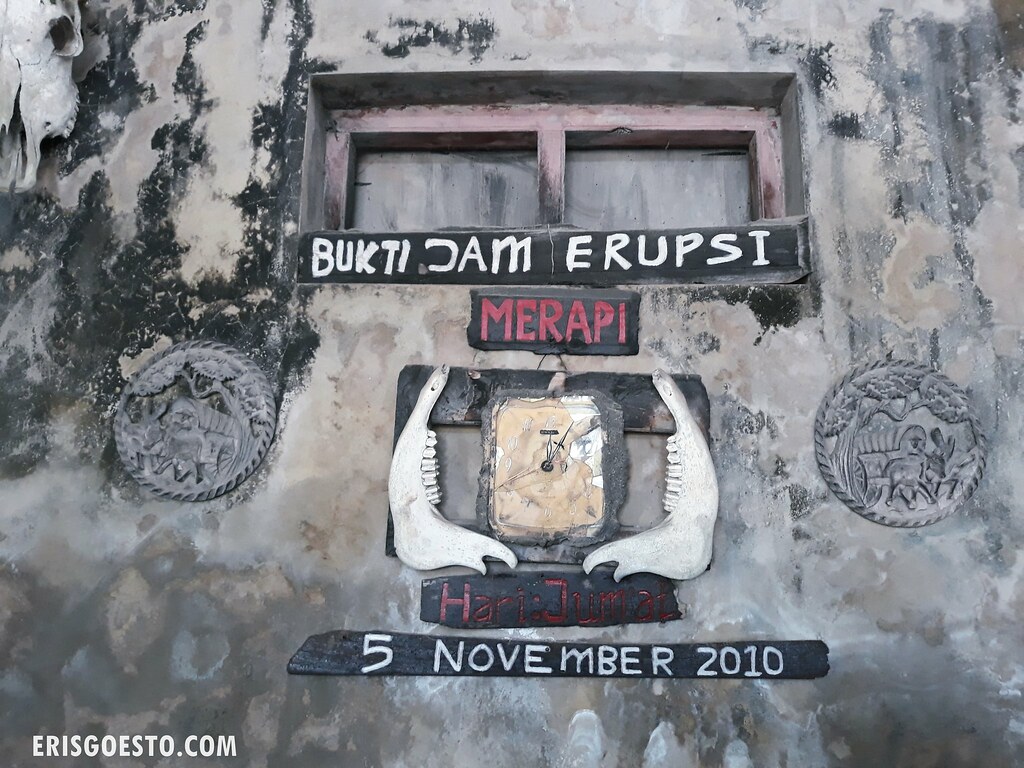 The ‘living room’ area with a wall clock that was said to have stopped at the moment of the eruption – a reminder of a disaster, frozen in time. 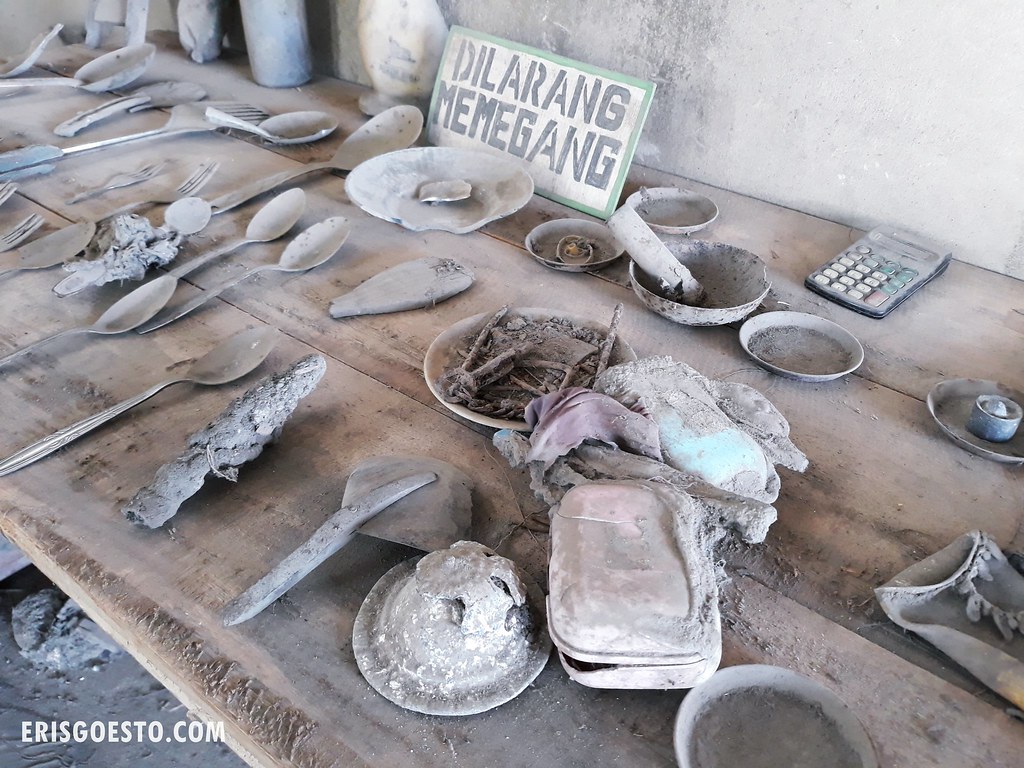 Cutlery and other household items such as calculators, some of which are partially melted, all covered in a layer of dust and ash. 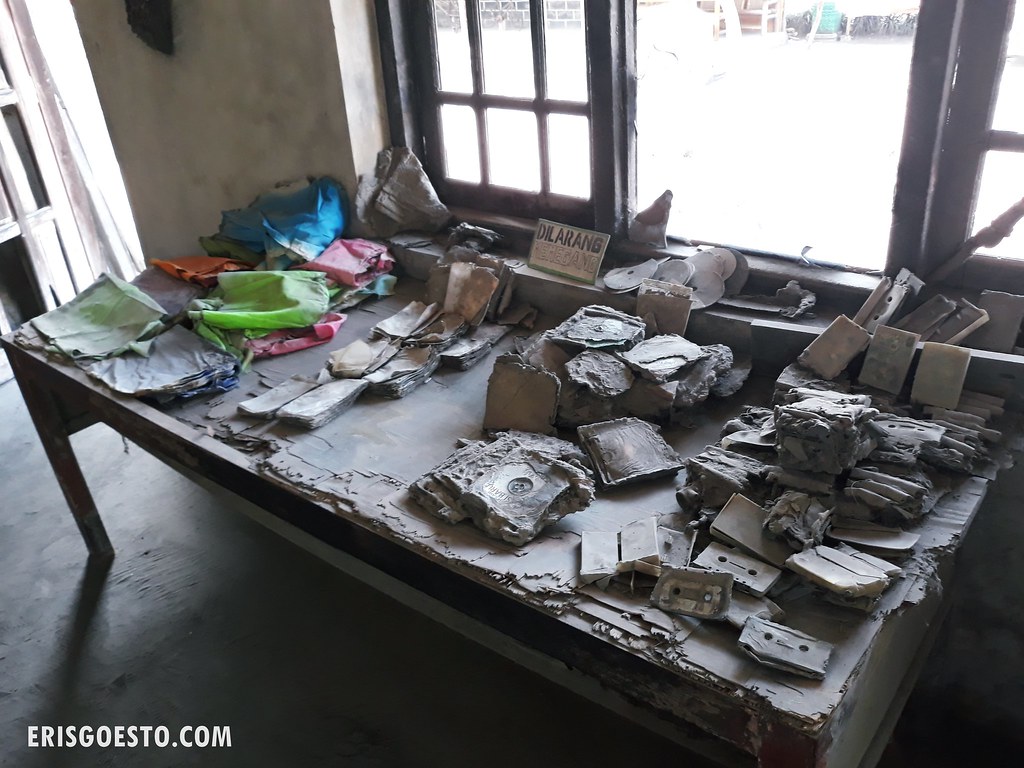 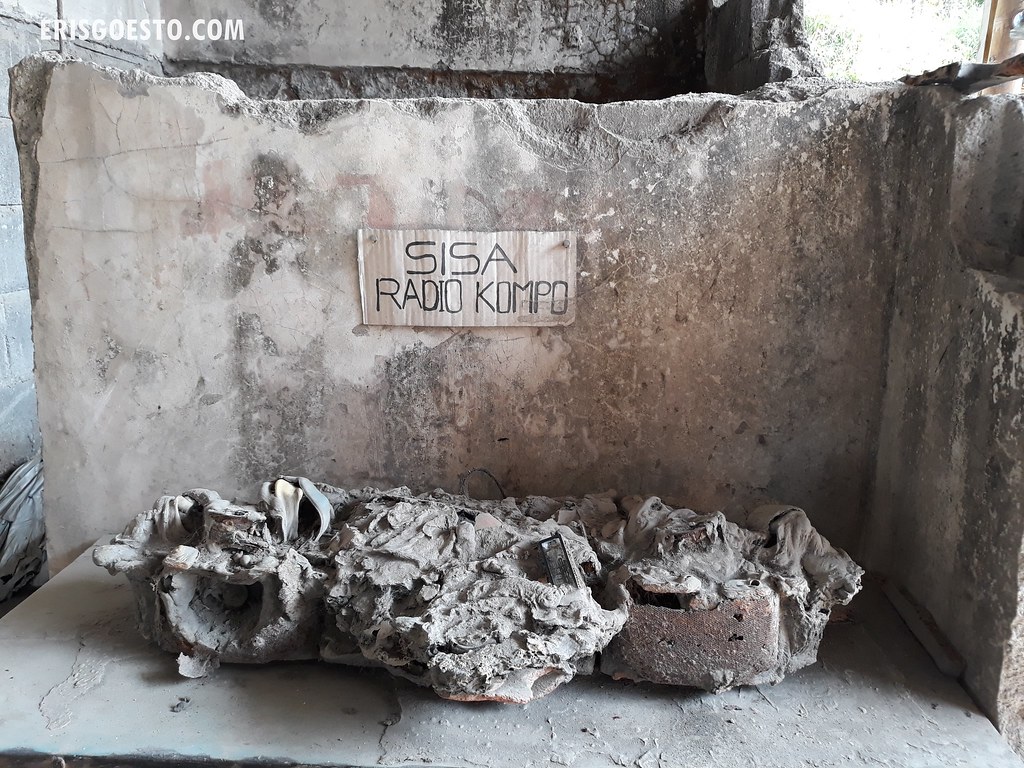 Remains of a melted radio. 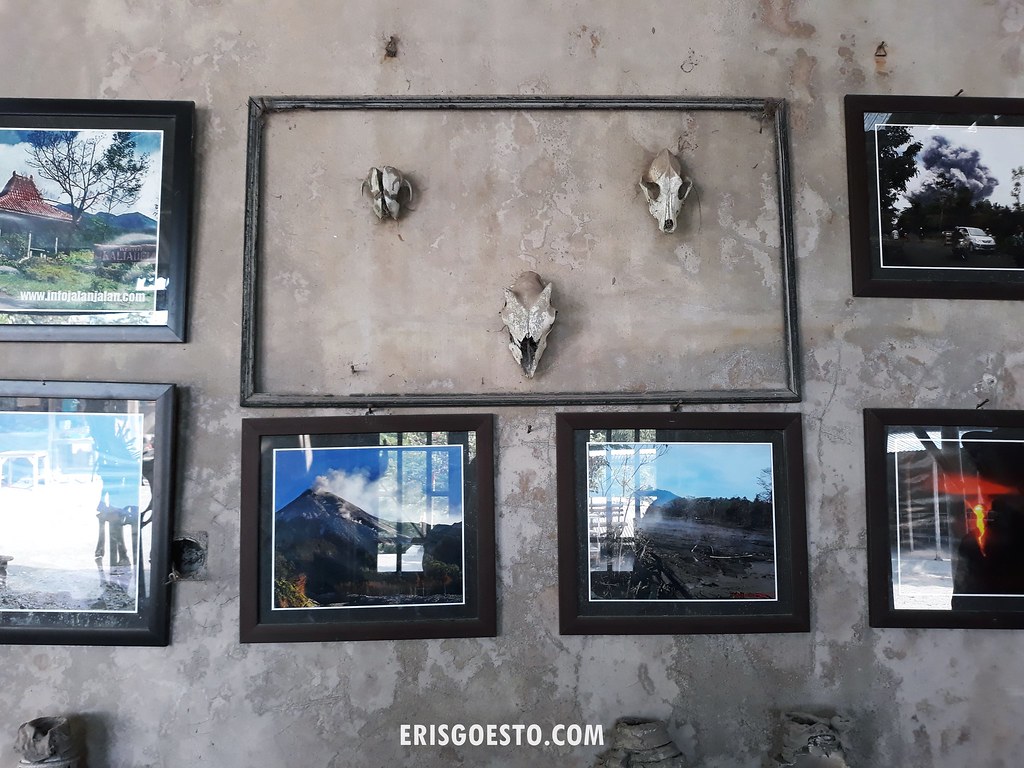 A section of the wall with skulls of small wildlife and photos of the volcano before, during and after the eruption. 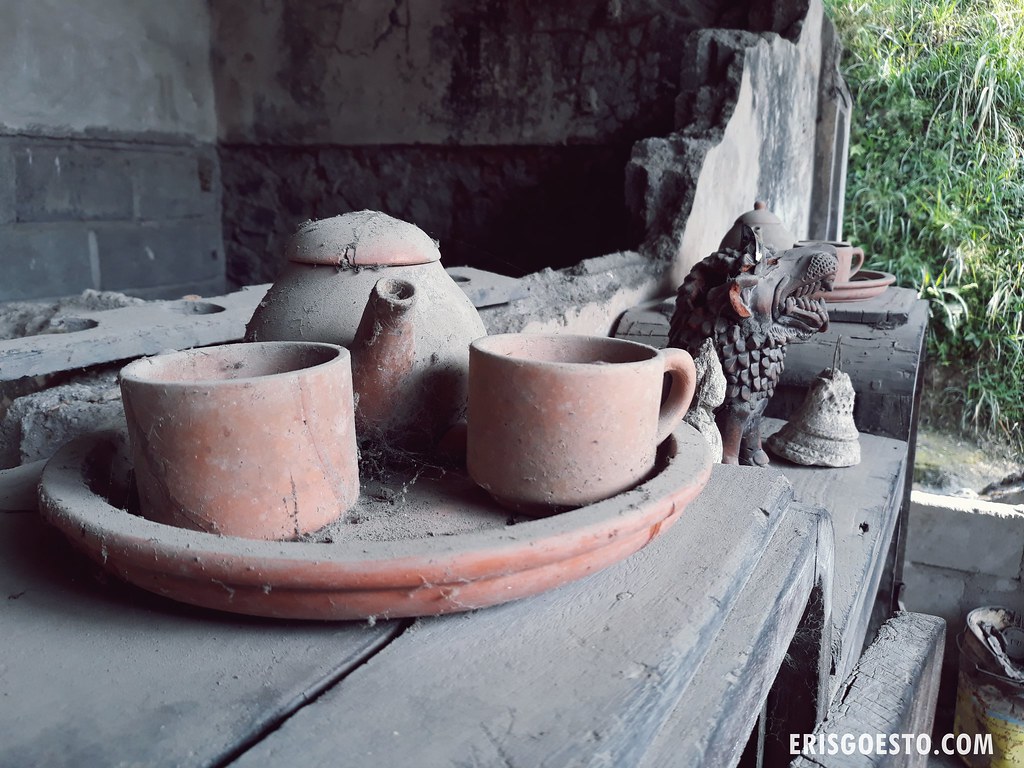 There’s something extremely haunting about seeing the remains in the museum, and the huge impact natural disasters can have on ordinary lives. That being said, I admire the resilient spirit of the people who live on Merapi’s slopes – they accept that this is part and parcel of life on the mountain, and carry on as best as they can. Because for better or worse, this, to them, is home. 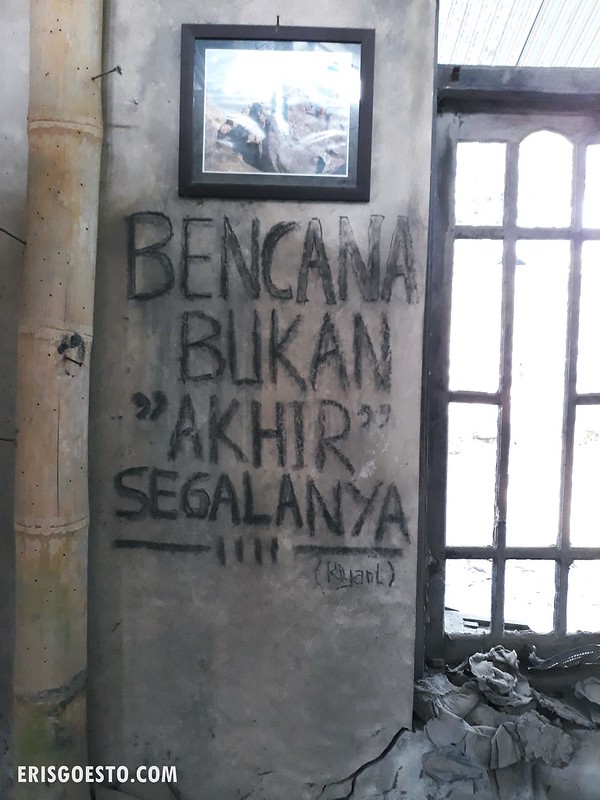 “Disaster is not the end of everything” 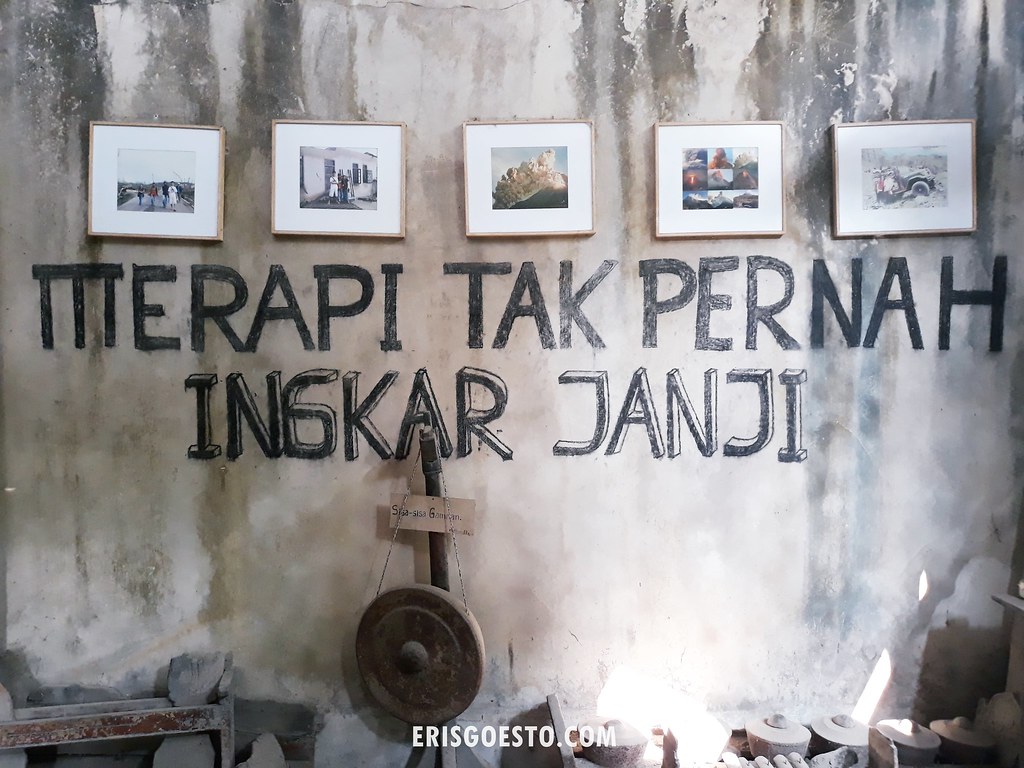 “Merapi has never broken its promise” – a graffiti showcasing the resilient spirit of people who live here, knowing that it’s not a matter of if, but when. 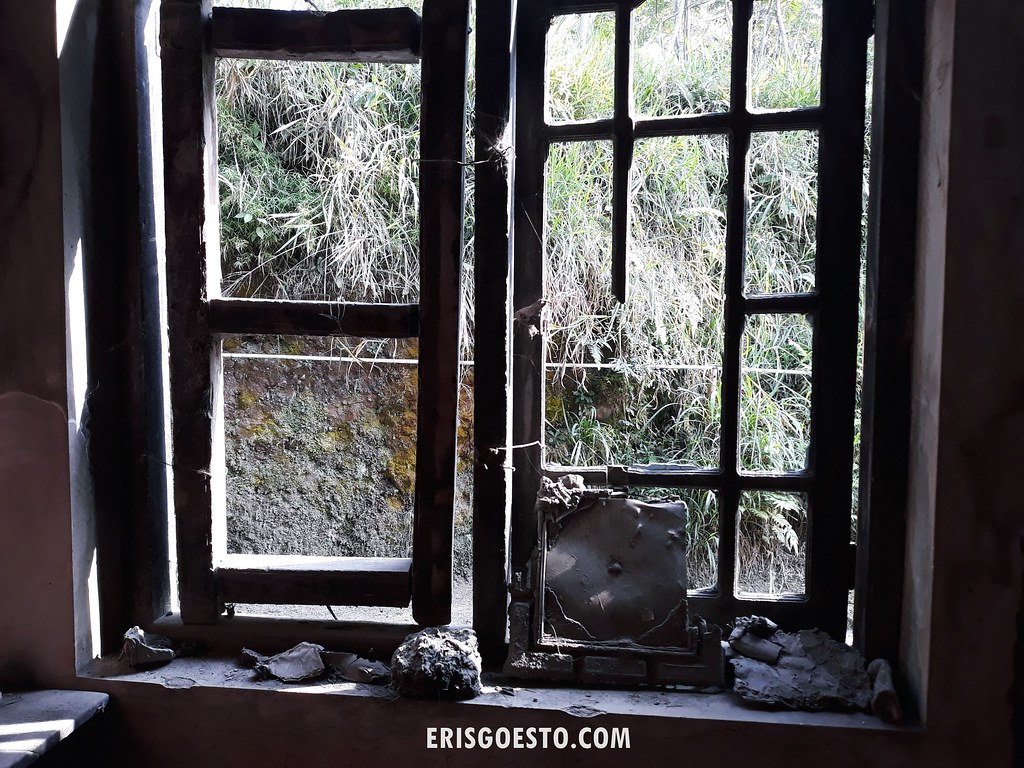 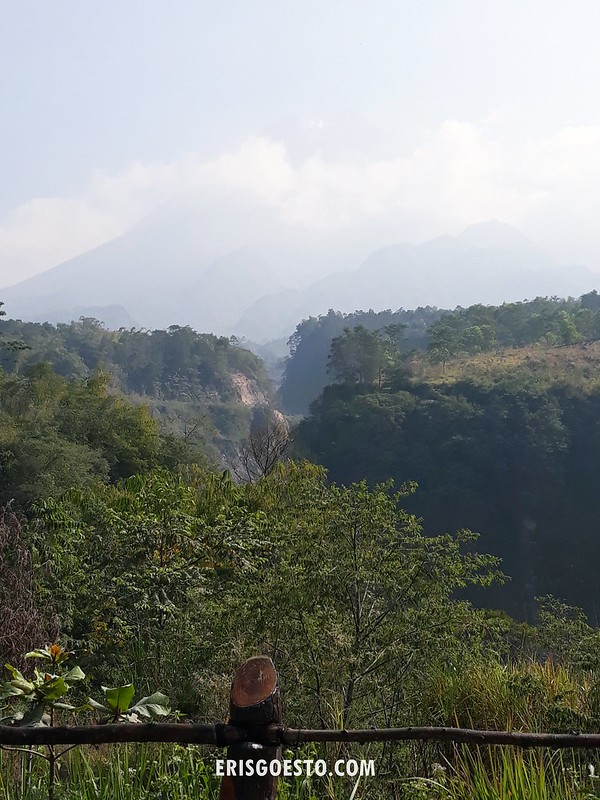 We next made our way to a vantage point, but it was a cloudy day and the volcano was hidden behind thick clouds. We could only see the outline of an imposing, conical shape in the distance. 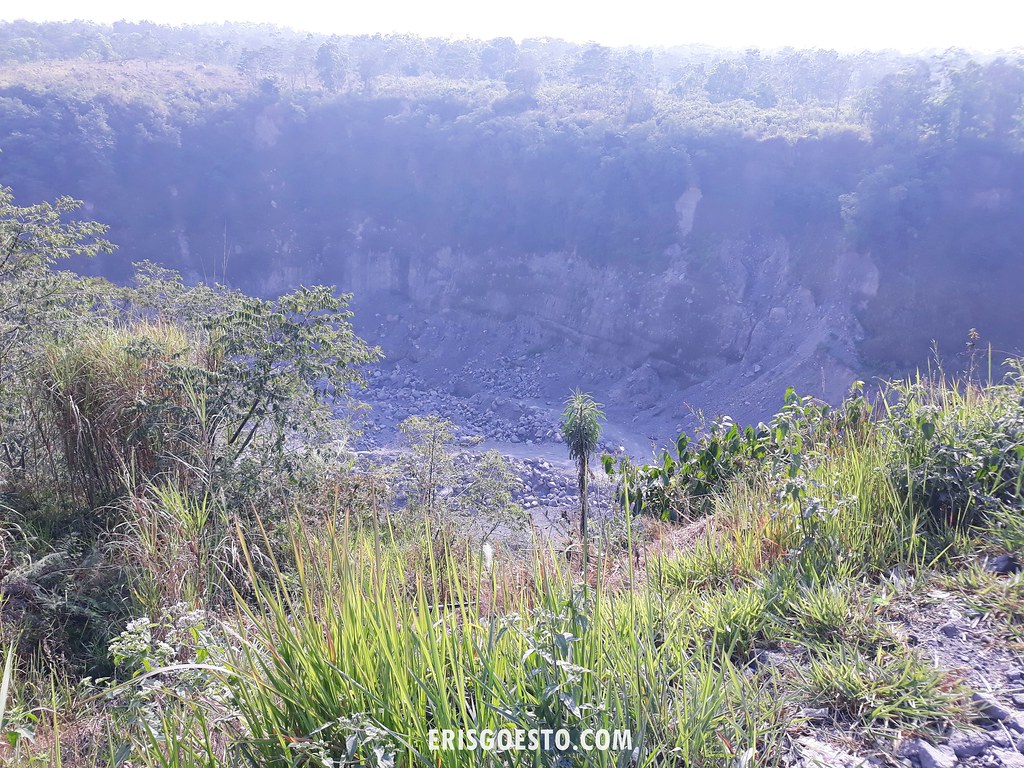 From the vantage point, a lava channel that had cut into the earth from the eruption’s flow, forming a deep ravine where no grass grows. 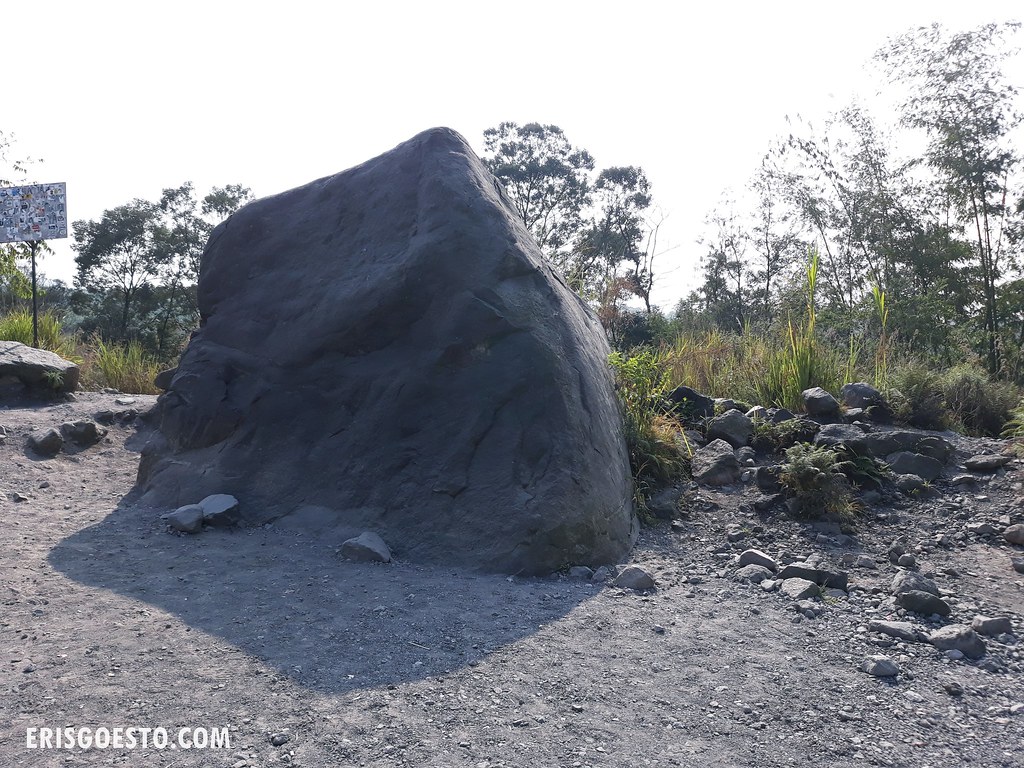 The Alien Stone was another stop on our Merapi lava tour. The giant chunk of rock was hurled out of the volcano during the 2010 eruption, and the locals believe it bears the features of their late village head, who was also killed in the disaster. The other side of the rock is said to resemble the face of a lion: 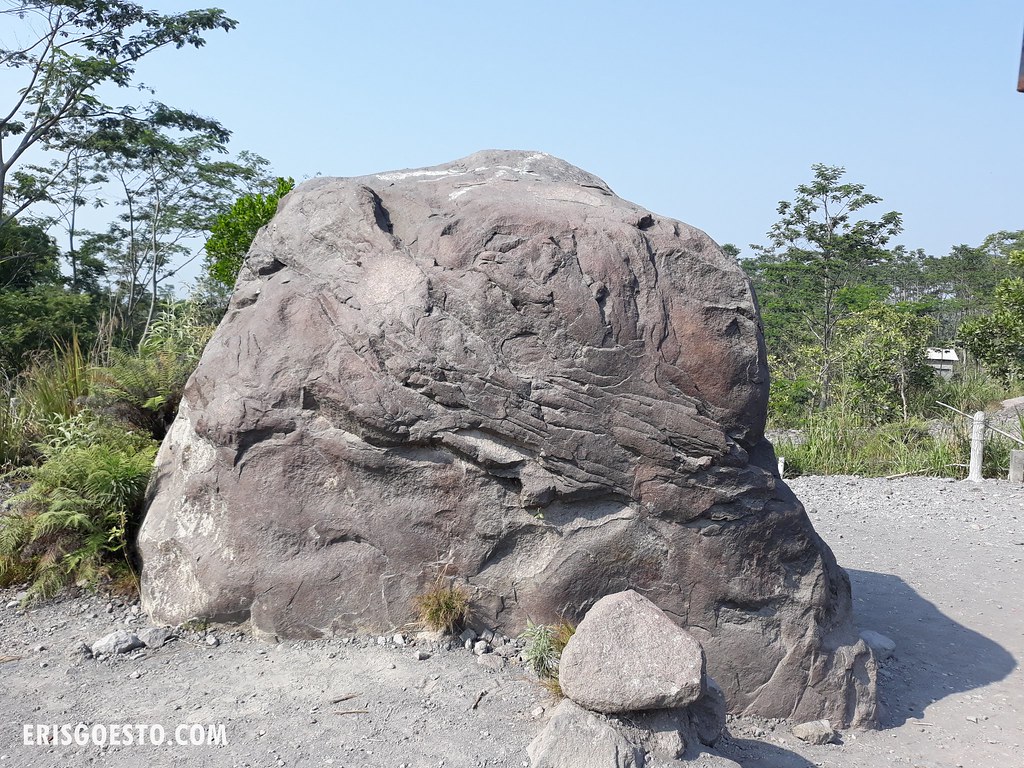 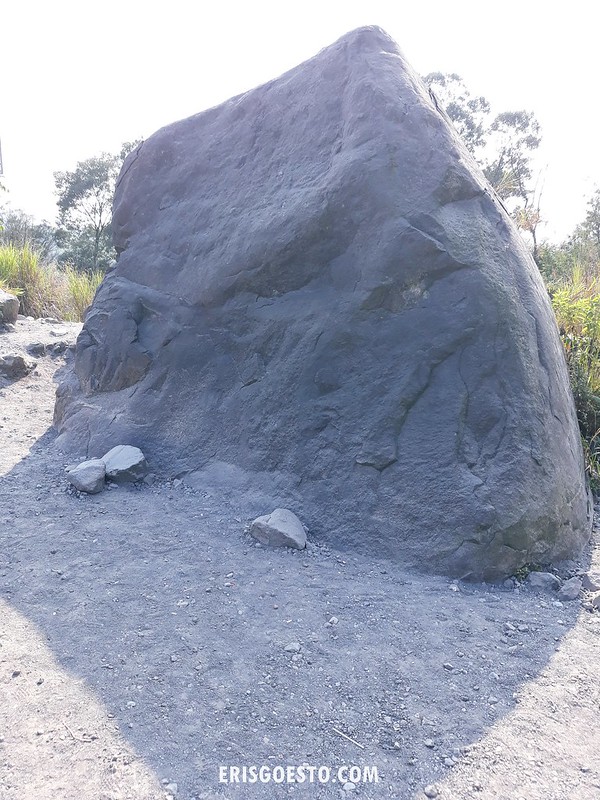 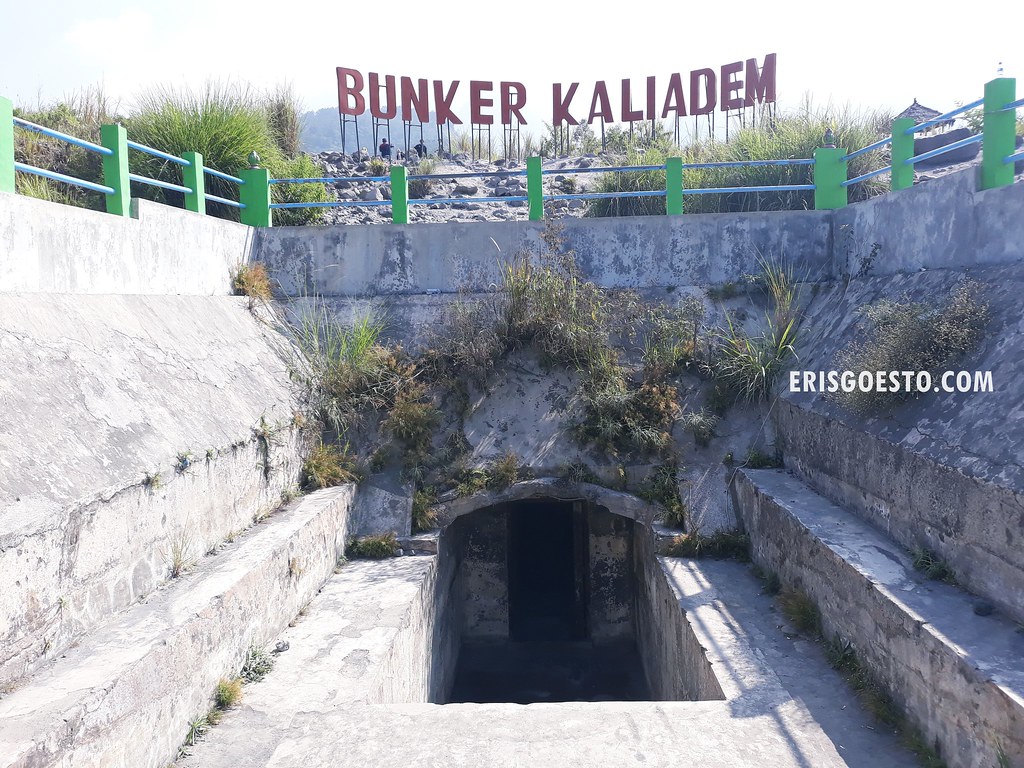 The last stop on our tour was Bunker Kaliaderm, which was built in 2005 as an emergency shelter. The beautiful and calm surroundings is in stark contrast to the terror the place has seen. During a major eruption in 2006, two rescue workers fleeing from the fast-moving pyroclastic flow of ash were trapped within, in up to six feet of boiling hot ash (reaching temperatures of up to 572 degrees Fahrenheit). They suffered horrific deaths; one trapped in a corner, the other in the bathroom was boiled alive, according to our guide. 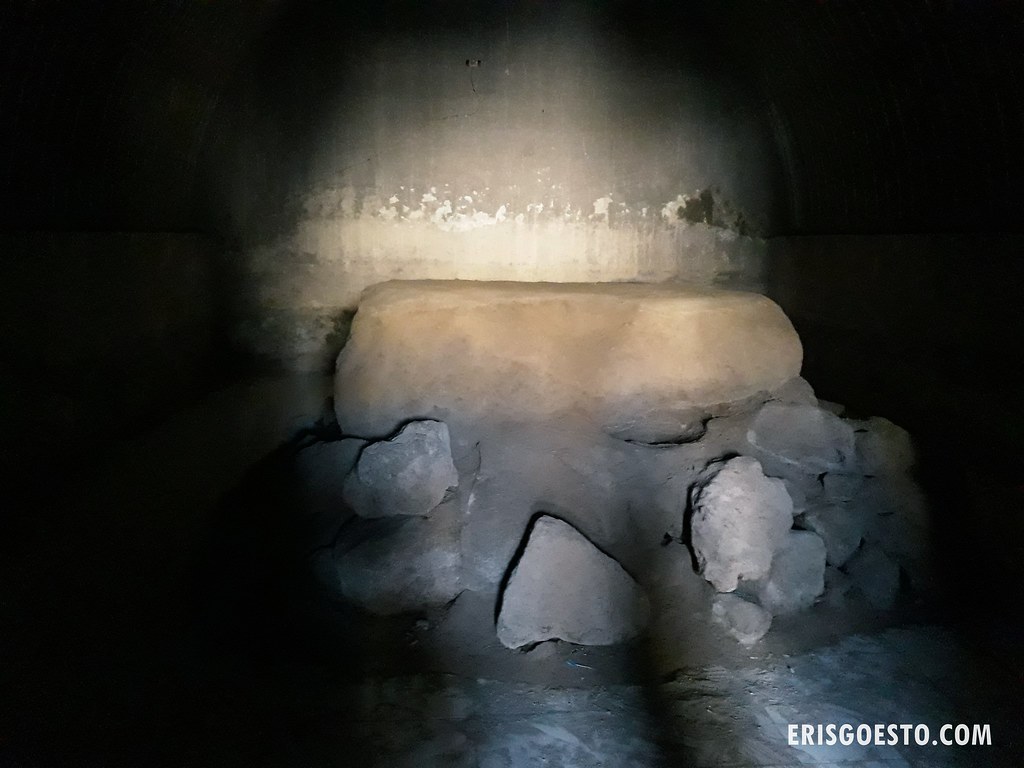 Remains of lava that seeped into the bunker. 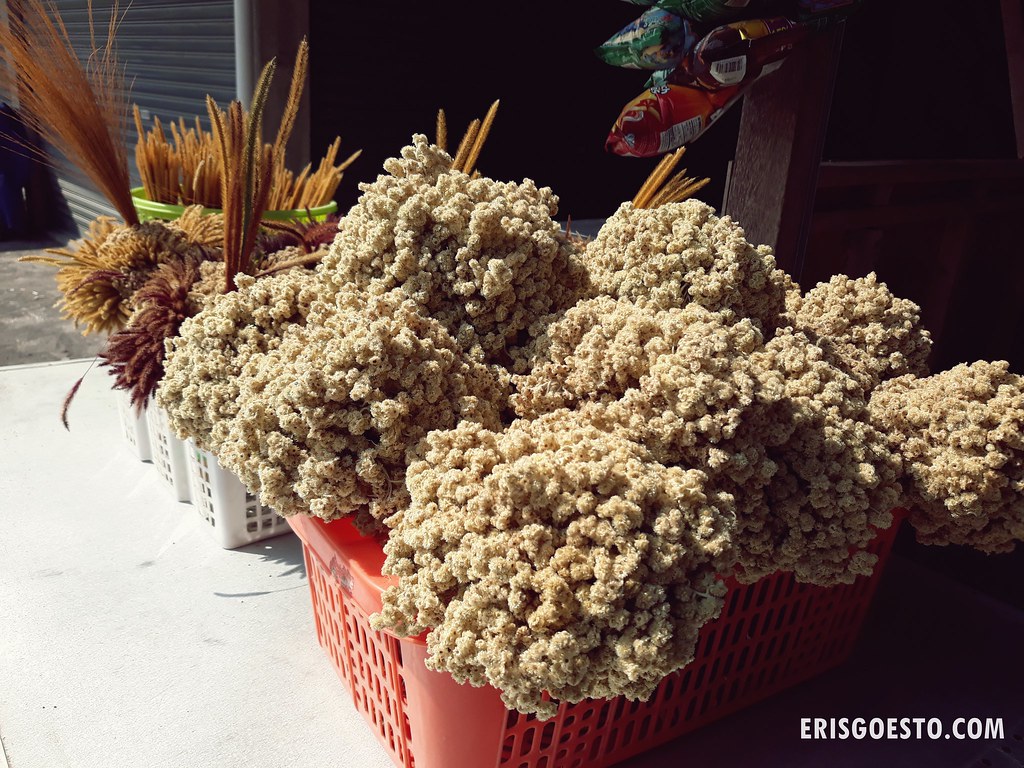 Flowers that only grow on Merapi’s slopes.

The Merapi Lava Jeep Tour offers a fascinating insight into the beautiful yet terrible power of mother nature, and I highly suggest going on a more comprehensive tour if time allows.

A guide on how to get to the area here.

PS: There are not many rest rooms around aside from those at the jeep base camp, so better do all your business before going on the tour!