Up until this week, I had never heard of David Hockney.

“Preposterous,” I hear you huffing. “How can you not know one of the most influential British artists of modern times?”

Well, pardon me for being an uncultured swine, but while I like and appreciate art, it’s not exactly necessary knowledge for me to pay my bills. So yeah.

To the uninitiated, David Hockney is an English painter, widely considered to be one of Britain’s most celebrated living artists. His early works often featured swimming pools in Los Angeles — where he lived in the 1960s — and they were his signature for a long time. In 2018, a 1972 artwork dubbed “Portrait of an Artist (Pool with Two Figures)” broke records at a Christie auction by selling for $90.3million (RM3.7bilion) — making it the highest price at auction for a work by a living artist.

To put it into perspective, the Selangor state government of Malaysia (where I’m staying) had a revenue of RM2.32billion in 2019. Which means that Hockney’s one piece surpasses the revenue that the richest state in Malaysia makes in an entire year. (**If you want to see how a $90.3 million painting looks like, click here.) In recent years, Hockney has transitioned to creating whimsical digital pieces using his iPad.

Over the years, there have been numerous debates on why Hockney’s works are so famous, and whether or not they’re worth the price they’re paid for. Now, I know that art is a very subjective thing — what you like may not be appealing to others. Personally, I do like some of Hockney’s works — they have a very Picasso/Matisse-esque quality to them. But I also know how the art world can be… biased in their way of valuing things (more on this later) — and there comes a point where as an ordinary person, you seriously question if some of these artists (and those in the art society) aren’t just… you know. Trolling the masses.

Recently, London’s mayor unveiled Hockney’s latest work at Piccadilly Circus as part of the #LetsDoLondon campaign, to revive domestic tourism and encourage Londoners to get out and support local businesses. It certainly got people buzzing — but not all of the noise was positive:

British people had a field day in the responses. (Swipe right for more)

While the majority took the mickey out of the painting, there were also those that thought it was a smart and provocative move. Yet others believed that people were making much ado about nothing.

Meanwhile, young artists have also joined the conversation, calling the entire campaign a ‘missed opportunity’ for the mayor’s office to not only help struggling artists and businesses, but also showcase London’s diversity. Some have shopped works of their own onto the space where Hockney’s works are currently being displayed. *Look up the hashtag #letsdolondonbetter — there are some seriously amazing artworks here!

While Hockney’s piece was apparently done for free, the mayor did spend £7million on the entire campaign — which no doubt included marketing and the engagement of an agency and what not to a) promote and b) put up the posters. Which, to many artists whose livelihoods have been affected by the pandemic, is a double slap to the face because Hockney has not lived in the UK for a long time (he’s based in the US). Perhaps the only possible good reason for choosing him over everyone else is the clout that Hockney has — so in a way I guess the work achieved its purpose to create conversations, because like I said: I didn’t know who Hockney was until recently.

This brings me to the next point which I mentioned earlier: how we value art today.

If you’ve ever watched the horror/thriller movie Velvet Buzzsaw starring Jake Gyllenhaal, it’s a brilliant satire of the art world today. In the film, Gyllenhaal plays a seemingly independent art critic, who gets pulled into the world of price fixing after his girlfriend — who works for a prominent art gallery owner — discovers cache of haunted paintings by a dead artist. They decided to display the paintings, to great success, but as greed and avarice take over, the trade off becomes deadly.

While the story’s plot is pretty outlandish, its portrayal of price fixing — and how critics, gallery owners, and buyers are basically complicit in ‘valuing’ how much an art piece is worth — is accurate imo. Take Mr Hockney’s latest piece for example, and this article. It is well written, full of praise like “a great piece of public art” and seemingly thought-provoking points like how public art usually adheres to ‘safe, sterile taste of private developers keen to bring artistic flair to artificially created public realms void of people or life’. And it makes you think, hey, maybe there IS more to this. They sound like valid points.

But I guess if you asked a child what they would see — without the pomp and flair and fancy words — they’d tell you like it is: it’s a doodle. One that they could probably make, given the right tools and materials. Eg: 5-year-old Rob makes a painting. Parent: “It shows how artistic he really is. Look at the composition. The brilliant pairing of colours. It’s sublime and it expresses the human condition.”

Anyway, what this environment creates is a small, select group of ‘elite’ artists whose works are considered extremely valuable, and you have the rest of the artists — whose works by the way are no more or less than others — but are undervalued and taken advantage of. I personally know artist friends who struggle to make ends meet despite how talented they are, because there are clients who constantly want discounts, aren’t paying them fairly, and think that art isn’t ‘worth’ anything. These same clients would gladly pay thousands for a prestigious piece from an artist who somehow managed to market themselves better.

I guess what I’m trying to say is, the art world as we know it today has lost its true meaning and purpose. When they say art can be anything, I didn’t think these people would literally take it to heart and spin in that way lol. There’s that artist Maurizio Catalan who duct taped a banana to a wall and someone paid $120,000 for it. There are also a series of paintings at the San Francisco Museum of Modern Art that comprise of completely white pieces. According to SFMOMA’s website, the primary reason for the artist’s creation was to “create a painting that looked untouched by human hands”. The site later goes on to say that they have an important place in art history as precursors of Minimalism and Conceptualism.

Yeah… you keep telling yourself that, buddy.

Maybe I’m dumb. I’m not a professional artist or an art critic. But what I see are blank paintings, and a lot of ways to describe why they’re revolutionary, ground breaking, amazing. It reminds me of the story of the Emperor and his New Clothes, where everyone was too afraid to call out that the emperor was parading around naked; instead clapping and applauding because everyone around them was doing so. It took a child’s innocent eyes to call it for what it was.

What do you think about Hockney’s work, and art today in general? I’d love to hear if you agree or disagree with my views, especially if you’re an artist. Let me know in the comments below! Experience the cosmopolitan flavours of London right in the heart of KL, as The Library @ The Ritz-Carlton Kuala Lumpur presents Two Friends – One Cuisine, a limited-time only dinner menu featuring guest chef Alexander Tyndall, of Marco Pierre White’s Wheeler’s restaurant at the Threadneedles Hotel. Collaborating with YTL Corporate Executive Chef Wai Look Chow, the four-course dinner is available from now until July 20 2019, showcasing the best of each ingredient through modern and traditional culinary artistry. 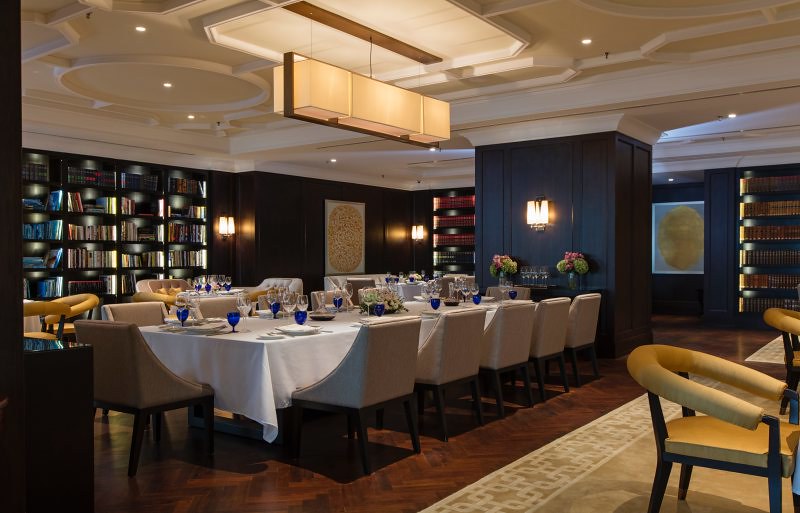 The elegant interiors of The Library immediately sets guests at ease, with intimate dining spaces and cosy corners. Surrounded by bookshelves (hence the name) ad lots of wood, the warm lighting and classy vibe makes for great conversations with friends and loved ones over a glass of wine, as you wile the night away enjoying the delights of a full fine dining experience. 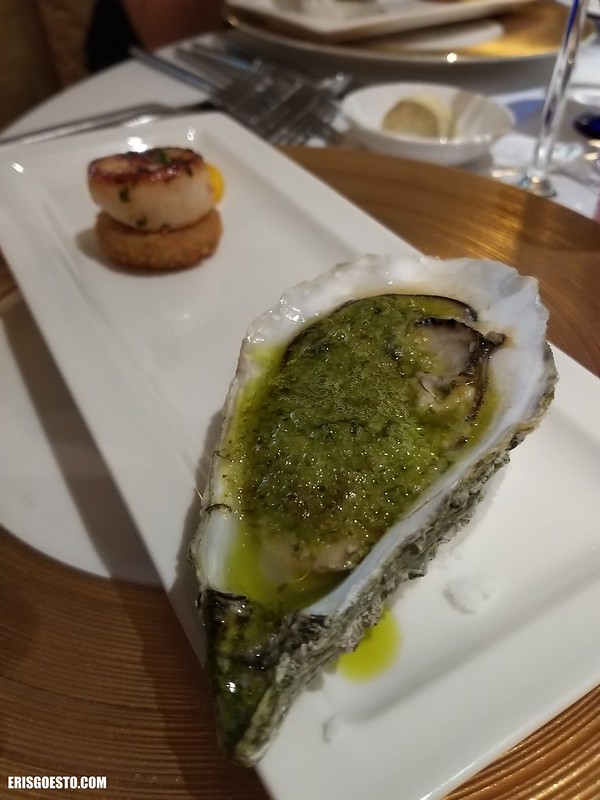 We kicked off with a prelude of amuse bouche to whet the appetite – Oysters Rockefeller au Gratin, and Seared Scallop with skirlie potato cake and vanilla purée. The oyster was large and juicy, topped with a creamy blend of butter, parsley and green herbs with a layer of melted cheese that accentuated the oyster’s brininess. The seared scallop was perfectly cooked, and the potato cake lent an element of crispiness to the bite-sized appetiser. 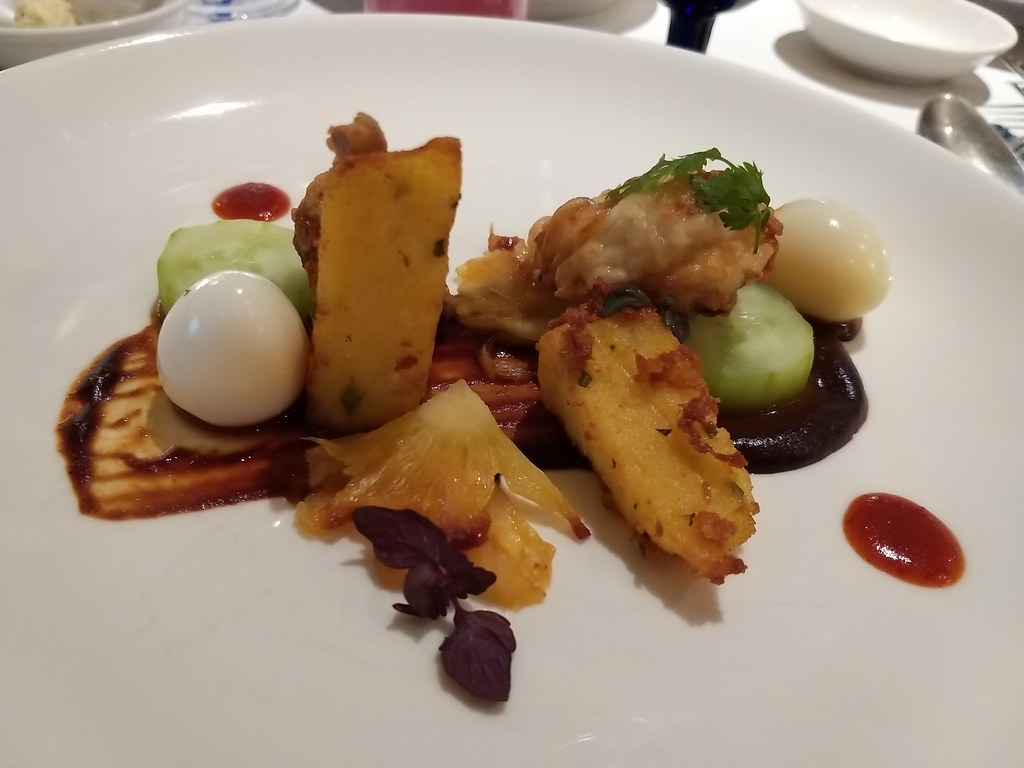 The light and airy Tempura Quail, which comes with pickled cucumber, kimchi puree and polenta fritata had each individual ingredient shining on its own, but also coming together to form a beautiful mix of textures and flavours. I enjoyed the bouncy quail eggs with their creamy centre, the robust, slightly gamey and tender quail meat, cut through by the tanginess of pineapple slices and the kimchi puree. 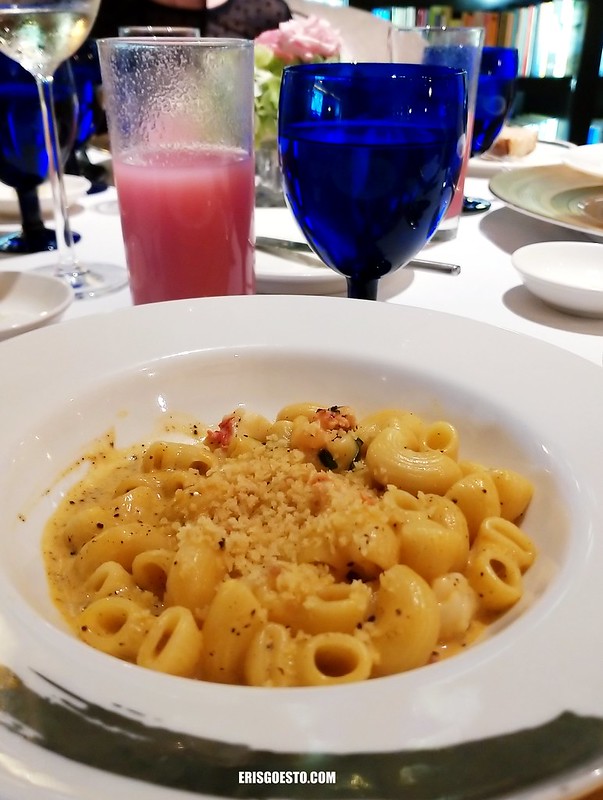 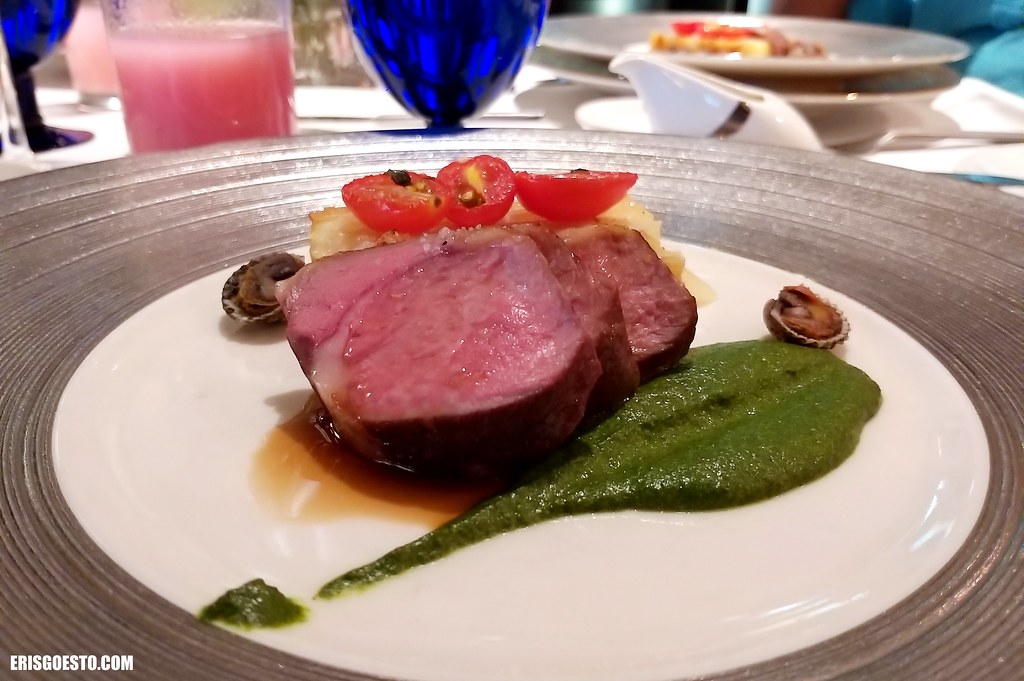 Next came Roasted Rack of Lamb with Cockles, Baby Spinach, Gratin Dauphinois (sliced potato baked in milk and cream) and Roasting jus. The meat was top grade, slicing apart like butter before melting in the mouth. The cockles didn’t go well with the meat, but it was still easily my favourite dish of the night. 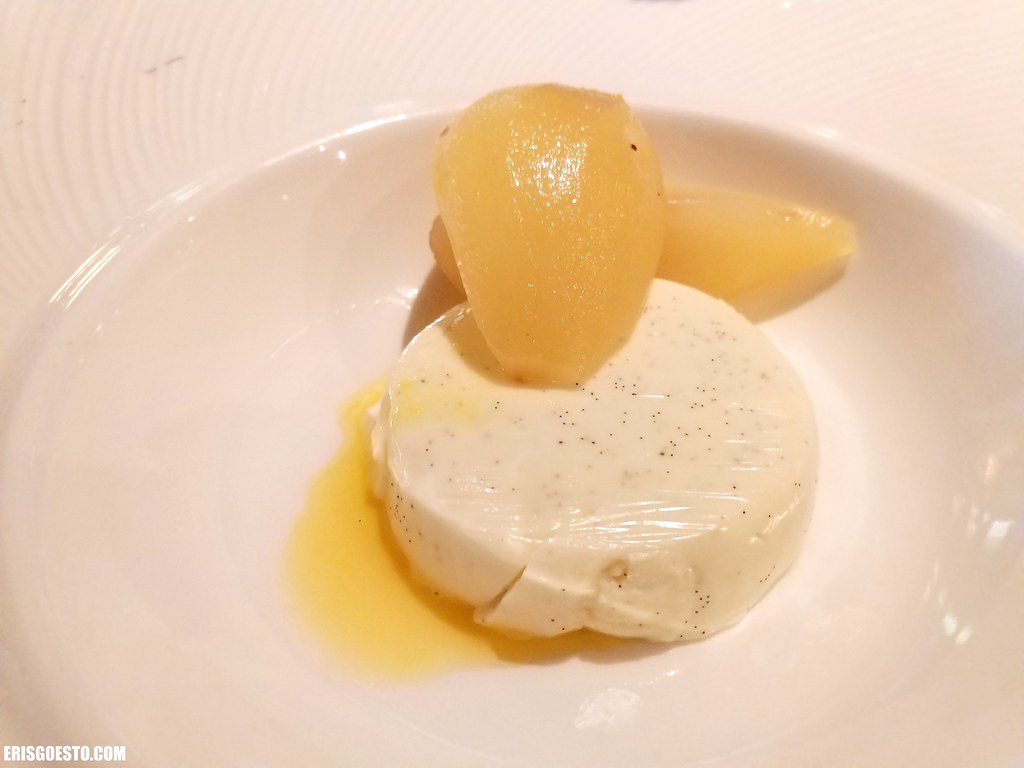 Ending the night on a sweet note, we had Chef Alex’s signature dessert – Wheeler’s Poached Pear with vanilla panna cotta and passion fruit sauce. The poached pear had just the right amount of sour-sweet to balance out the thick but smooth creaminess of the panna cotta. 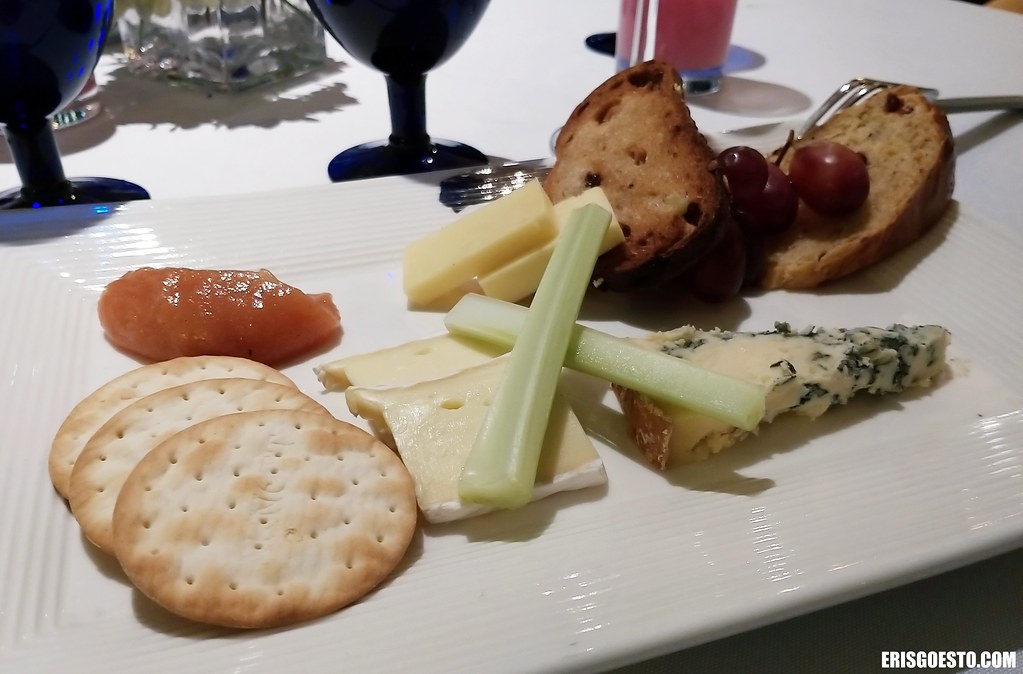 A cheese platter was served at the end of the meal, although this isn’t part of the 4-course dinner; featuring Vintage Stilton, Mature Cheddar and Ripe Brie. Personally, I love blue cheese so the Stilton was my favourite, but it may taste a little strong for others.

The exclusive four-course menu will be available from now until July 20 2019, from 7pm until 11pm and is priced at MYR350 nett per person with an option of wine pairing at MYR450 nett per person.

For dining reservations and enquiries, call +60 3 2142 8000 or email
dining@ritzcarltonkl.com.

*I was invited as a guest to this food review as part of work. Views here are entirely my own.